eo52vug said:
Love the project look forward to hearing it run, what didn't go to plan today ?
Click to expand...

Its seized up when I tried turning it over to check for oil pressure. And before starting it. Really fucked me off as it’s probably got to come out again 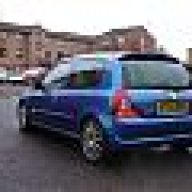 Megane,CLK500,Flexus
Found the problem!
What a c**t

ClioSport Club Member
Jim's rejects
Better the starter than it nipping up from no oil. As annoying as it is.
J

As videos go - this ones worth watching...

It’s a little loud but that is just turbos on. There’s cats and back boxes to go on yet to quieten it down a bit hopefully

because it’s not running on 8

Jaff. said:
because it’s not running on 8

You clever bugger, wiring in cylinder deactivation to lower emissions.

lol I dont think im, actually that clever, i think it just has an idle problem lol.

few little issues to sort out, only minor oil leaks really. chuck some coolant in it and watch that soak the floor and then its just waiting for some hubs so i can bleed the breaks to take it for a spin...

Amazing work getting it to this point

Megane,CLK500,Flexus
Anyone know if you can get “pull“ actuators for turbos?
N

ClioSport Club Member
As in eletronic actuator ?
A lot of diesel turbos use them Ive had to change one on a bmw before and sure stuff like the nissan navara runs them

Jaff. said:
Anyone know if you can get “pull“ actuators for turbos?
Click to expand...

neil a said:
As in eletronic actuator ?
A lot of diesel turbos use them Ive had to change one on a bmw before and sure stuff like the nissan navara runs them

hmm I was hoping for a manual option but it doesn’t seem like there is one. Those are interesting though! I wonder how they work electronically. I guess they’re ecu controlled when the ECU sees boost pressure. don’t think that will work with my current setup but could when I rewire
J

Megane,CLK500,Flexus
gonna have to fit some silencers to this thing, even to test it i think its a bit loud. I'm getting the neighbours look out the windows to see what the noise is when i'm "testing" it LOL

On another positive note... the clutch works, the gearbox works, the rear brakes work its literally just waiting for some front hubs before i can take it for a spin!

it has 2 oil leaks on the oil returns from the turbos which will need a solution i think. and the slightest water leak from a pipe at the back which i was expecting. its not bad enough to fix though. ill fix it when the engine inevitably comes out again lol

its really bad at idling though, so main thing i need to do to get some more testing in, is pipe the IACV up to the TB before the throttle plate as the MAF needs to see all air entering the engine which its currently not doing. hopefully that's an easy fix.
J

should help with the complaints form the neighbours

if it had a laity cam and wasn’t supposed to be as smooth as butter I’d agree lol.

but here is something wrong somewhere

I’m suspecting the IACV may be goosed. Gonna try a spare when I can get hold of one.
J

Megane,CLK500,Flexus
Anyone know of a set of gauges i can buy that dont look tacky as s**t?

and no i cant afford stack gauges lol

ClioSport Club Member
Boris
It's going to look like need for speed central mate, i'd do it through a tablet and have it all on there.
J

dann2707 said:
It's going to look like need for speed central mate, i'd do it through a tablet and have it all on there.
Click to expand...

not really, I can make 4 gauges in the dash look stock and ive got space for 2 more in the centre. so can look right if i can find ones that arent tacky.

ClioSport Club Member
Several
I used an 80mm SPA tacho/speedo in my old Escort. Wasn't the cheapest but seemed to work well. Just had that central, then oil pressure and water temp. Oh and fuel, but that was in the back #becauseracecar
J

Megane,CLK500,Flexus
think i may have just found the solution but i don't know if i like it or not...

behind the standard clock face on the focus, with a special display on the areas that are visible and the bits behind the fancy shapes being "dead"

can customise it to look standard but still have additional gauges sneaked into it like boost etc.
J

Megane,CLK500,Flexus
trying to fix the idle issues... and some other problems

Donny_Dog said:
Genuinely thought it would end with it idling successful. Gutted.
I'm having similar issues, feel your pain.
Click to expand...

don’t get your hopes up, I still haven’t fixed it lol.

driving me mad to an extent but then I haven’t checked everything. I glossed over it in the video but I pretty much rewired the car to make it work “properly” but it still hasn’t fixed the idle, that took up a fair bit of time
J

Megane,CLK500,Flexus
can someone help me find a ~ 32mm master cylinder with 2 outlets that would fit this thing?

ClioSport Club Member
Golf Mk6 tdi
Did you see the lotus esprit car sos? Someone made a complete digital setup in a shed somewhere which was a direct fit.
J

Steveball said:
Did you see the lotus esprit car sos? Someone made a complete digital setup in a shed somewhere which was a direct fit.
Click to expand...

no I rarely watch normal tv lol.
You talking about digital dashboards? Be interested to watch that tbh

Steveball said:
Did you see the lotus esprit car sos? Someone made a complete digital setup in a shed somewhere which was a direct fit.
Click to expand...

I did, somewhere in Bridgend South Wales as well if I remember, so probably. It too far from you, basically a digital programmable screen that fitted behind the standard binnacle. Looked OEM and completely customisable! Proper nice bit of kit
Last edited: May 15, 2020