Some nice f**ker decided last night that they had nothing else to do and decided to kick my drivers door in.

It was parked in the pub car park when it happened, luckily someone saw it and came in the pub with the reg no of the car full of lads who did it.

The witness said they got out and were looking round it, then commented on it being a nice car, then one of the lads said "was a nice car" and kicked the drivers door.

Ive reported it to the police but I dont think anything will come from it.

Im just so pissed off, so much so that im going to sell the valver after xmas. im fed up of the unwanted attention the car gets. Just seems you cant leave it anywhere just lately.

One very unhappy person today
B

Have to say, thats just f*cking evil; same as the guy yesterday who had his car keyed on his own driveway... if it was me and I caught the B4STARDs...
S

You should take the law in your own hands with some trusted friends! Seek and destroy
B

I would do normally, but its finding the car.

Well see what the police come up with first. But i WILL have my moment with these lads, my car is well known, as well as myself and the people i knock about with, i dont think they have realised the sort of people they are playing with, hope they like hospital food!!!!

If you have the registration you can find the address easily. I can anyway. Always helps being mates with a dodgy copper!
C

and lol aaron, either you or one of your dodgy mates can get hold of anything!

I am told that if you write to the DVLA and say to them that that car was parked on private property at the time a crime was committed, and there were witnesses to it, they should divulge the information as to who they are.

hope the police actually do somethin about it, would be typical of them not to though
P

Is that club as in ClioSport members or as in bring a bat?

Ill bring up a boomerang from australia so we can have his head! 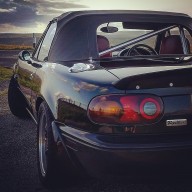 I have some pliers and a blowtorch...
C

Is your Valver done up or is it just standard mate?
R

Know how it feels, some one put a hammer to my passenger window and windscreen, didnt even nick anything. Im only 17 and work my arse off to afford the insurance on my car, it takes the pi$$
R

by the way, i have a naluminum little league baseball bat in my car now, nice and discreet!!
C

I have a mahoosive maglite. Good for clobbering and completely neccessary officer!!
R

My valver just has wheels, zorst, blue repeaters, parcel shelf re-trimmed in st Georges cross thats all you can see externally. plus its always spotlessly clean so stands out like a diamond in dog sh*t.

Ive got a nice big torque wrench behind my seat. seeing as the Renault wheel brace is useless and my wheel nuts are recessed officer
S

another jealous idiot........ makes you sick

Its done by scallys with small brains...... and small nobs

Search and destroy! Make sure you get hold of the little gimps and teach them a lesson I had my back window smashed pointlessely, someone threw stones at it by the look of the dented paintwork around the window. t**sers.
D


I would do normally, but its finding the car.
Click to expand...

Its actually easier than you think, but it will cost you. I used to have a phone that had free WAP on it and I used to play around with it all the time. Anyway I found this (default) site that let you put in the car reg and it brought up the details of the car. Colour, type, engine size etc. But for £5 you could get all the details on the car. This is I assume a checkup if you are buying it. It would tell you the registered owner and there address. I am sure if you ask the AA (the car check people) nicely they will tell you. I got a mate who does that AA lark so I will ask him if he can get access to the database. If he can, then I will let you know and we can take it from there. Then take there heads from there bodys.

The problem with AA is that you dont get the address fields that they store on the database.

You can request the info direct from the DVLA by filling out a V888 form (larger post offices should have them). Youll need to give a reason why you need the information. Like someone above said, try saying a vehicle keeps parking on provate property and youd like to send a letter to the owner. I think it only costs £2.50!

Its worked for me in the past Dont think you can do it too regularly though or itd spark interest.