does any one use this shell optimax and notice any difference in performance?

Nope and Nope........ I used to use it in my 5 as it stood a risk of Detonating if i didnt use high octane fuel - but to be honest, in any modern engine etc i dont really think youll notice anything! Its not worth the extra money!
S

ive jsut started using it, after much persuasion (theres a whole thread on this somewhere!) and have felt the difference. It took a couple of times for me to notice, but I definitely wont be going back to normal stuff!!! 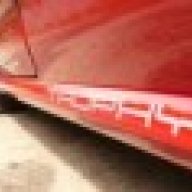 In the manual, Renault recommends 98RON fuel which I believe what Optimax is. Ive ran my car with Optimax since new so I cant say whether theres and improvement or not.
R

Yeah there is a whole thread about it. Its good for your engine, you get better economy and theres people with posts saying your car releases a couple more bhp. Were only talking a few extra quid here, lets not act like northerners!
R

If the older members can remember when Shell launched their Formula Shell (circa 1988 ish). This used a sodium substitute for lead. My higher than average CR MKII 16 Golf then used to run sweet on this juice. It all crumbled when Vauxhall claimed that it screwed up their inlet valves?! Still think Vauxhall used this as a cover up for their sh*te engines.

Anyway, from all this, I reckon Shell are one of the pioneers in developing good forecourt petrol. The Asda/Tesco petrol may be cheap but will generally not give good performance / mpg figures. optimax is probably the best fuel available at the present time. If you can aford it and have a higher CR engine ....use it!

I always used it. Stopped and noticed an improvement in performance. So stayed on unleaded for a while then filled up with Optimax again a few weeks back. noticed a difference in performance.

Not loads but just a more responsive feel!