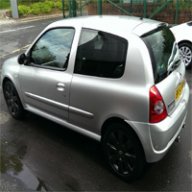 182
Ok so ive just bought a 182 non cup on 36k knowing the cambelt and dephaser etc havnt been done which i want to get done asap.

iv had a quote of 575 from renault bolton through a friend of a friend, for cambelt kit, aux kit and dephaser but not sure if this included any other parts. (or would he have expected to need other bits... like seals etc?)
Is this a reasonable price as i have no clue to be honest?

Also iv been put onto a mechanic at renault manchester through a friend who has said he will do it for £100 + parts as a foreigner (whether i want just cambelt doing or everything its still £100)
Im unsure about going this route as i obviously wont be getting a reciept to say the work has been carried out unless this is significantly cheaper as i plan on keeping the car but you never know.

What other parts should i be changing whilst im doing cam and aux belts and dephaser? And also how much roughly are all the part likely to be?

Thanks in advance people

On a side note, if i were to book it in with renault manchester, this mechanic doing it as a forienger would be the guy who gets the job anyway as he has done many of these, he knows what he is doing (apparently :/)
Last edited: Apr 19, 2014

Bought my clio from there. And had the belts done (long story) but was checked after and was spot on.

Can't remember his name though.

Bought my clio from there. And had the belts done (long story) but was checked after and was spot on.