ClioSport Moderator
182Turbo,DCi90
I have been needing a car for doing my daily commute. Needed something very frugal, half decent stereo and fairly comfortable as I would probably be doing mega mileage. I started looking for MK3 DCi's - cheap , high milers and went to see quite a few but they were all scrappers.

Was browsing Gumtree and came across as really cheap CAT S MK4 DCi non runner / non starter. The owner had smacked a curb and bent the front passenger wheel back as well as setting off airbags.

The car on the whole was really nice though:
Dynamique media nav
Light Yellow
Pano roof
limited edition Le mans (check the hideous steering wheel)
2014 - 28K miles
It was up for £2750 which is really cheap considering they are £9k for a similar non CAT S car.

So me and @.Joe jumped in my car and went to view it in Birmingham. Joe is absolutely amazing with Clios and Renault Clip in particular.
This is how the car was when we turned up - look at the front wheel: 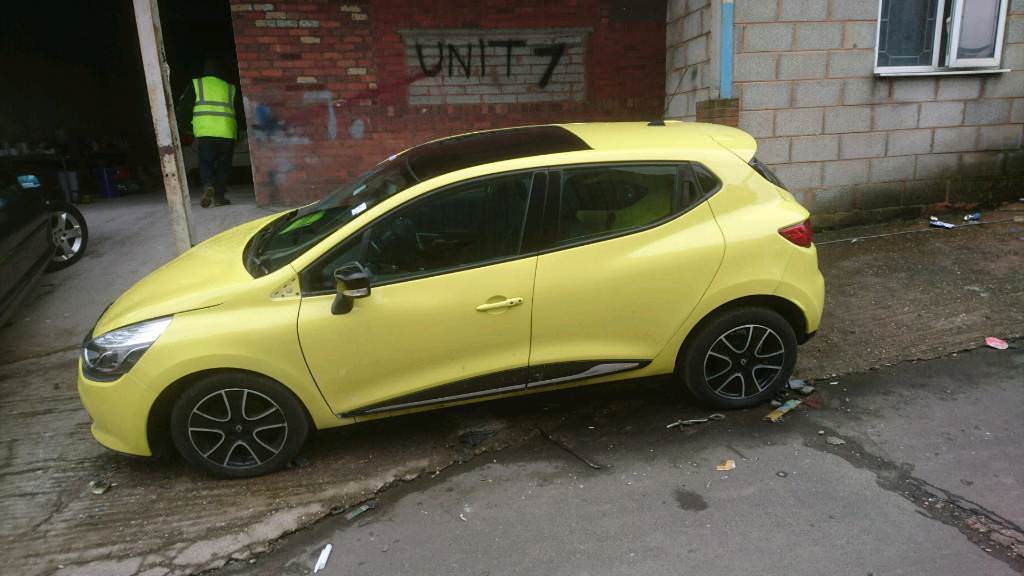 The owner didnt have a clue about cars and had tried to fix the car himself by replacing the airbags and possibly the pretensioners. The car wouldnt start for him even after some mates of his had spent the weekend trying.

After a thorough going over the damage was the wishbone was bent, archliners were off the car and some small odds and ends that needed tidying up.
I didnt want to buy the car unless it started so concentrated on that. This is where Joe works his magic. Joe connected Clip to the car, diagnosed all the faults and reset the Airbags , fuel inertia cut off and various other things. We had troubles with the car battery but after a bump start the car fired in to life. Joe honesty is a fooking wizard with clip!

We drove it round the block and it seemed fine, the steering wheel wasnt straight and the car was veering a little but drove safely. I bought it and paid the man asking price. I didnt want to haggle as at that point it seemed a massive bargain as it was.

We taxed it and insured it and Joe drove it back to Oxford for me. I got straight on to Ebay and bought a new subframe complete with wishbones and ARB for £100. Renbreakers on ebay are amazing and have bought a good few things off them. They arrived and the next weekend i set about replacing them. Not the easiest of jobs on axle stands on your own due to the weight of the subframe etc and having to hold the subframe and stick the bolts in etc. Got it all done in a day though and the good news is the wheel was now central.

I then carried out a full service - oil+filter, Airfilter, coolant change, pollen filter. I also spent this weekend cleaning the car and restoring the paintwork as it wasnt very vibrant or shiny. Took it for an alignment and 2 new front tyres and it now drives perfectly!

Ive been using it for work for a week and using ECO mode to save as much money as possible. The best thing about this car is TAX is FREE and it can genuinely do

Here are some pics of it now, I reckon it looks pretty good, the black pano roof has been lovely in the sun, its comfortable , easy to drive, no loud exhaust so really quiet, soaks up bumps so much better than my other clio RS's. Ive probably saved just under £6k buying this. 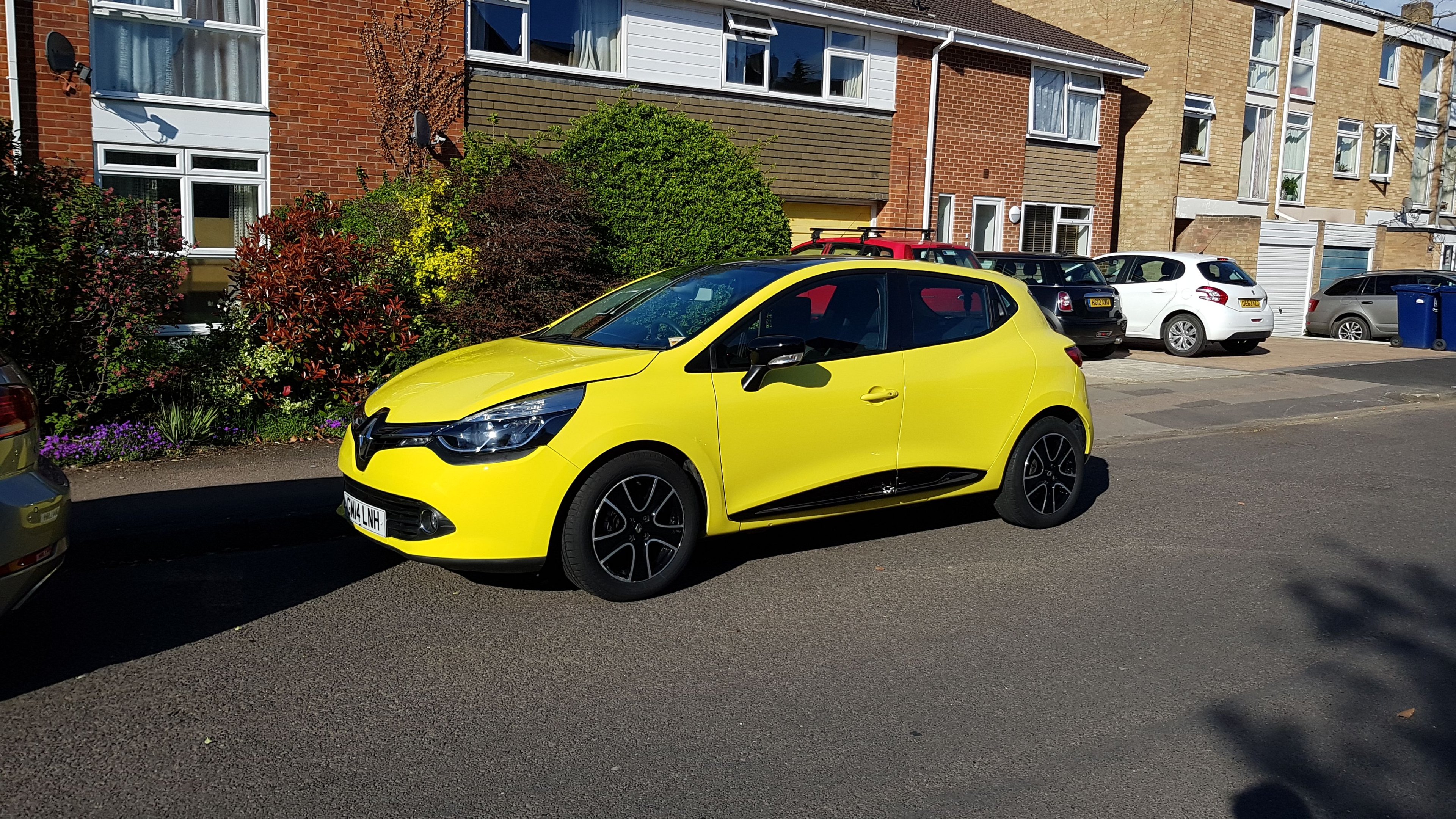 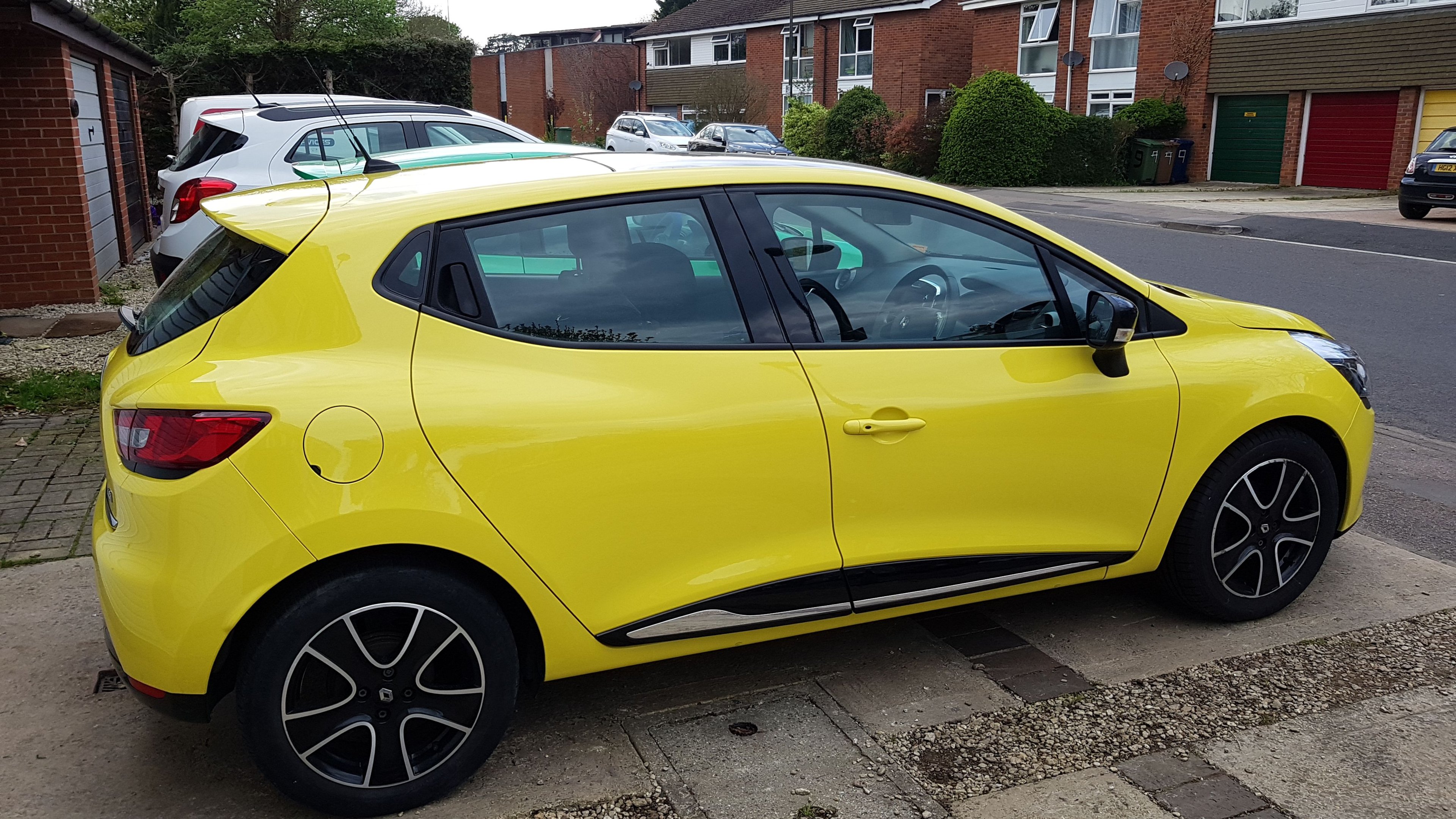 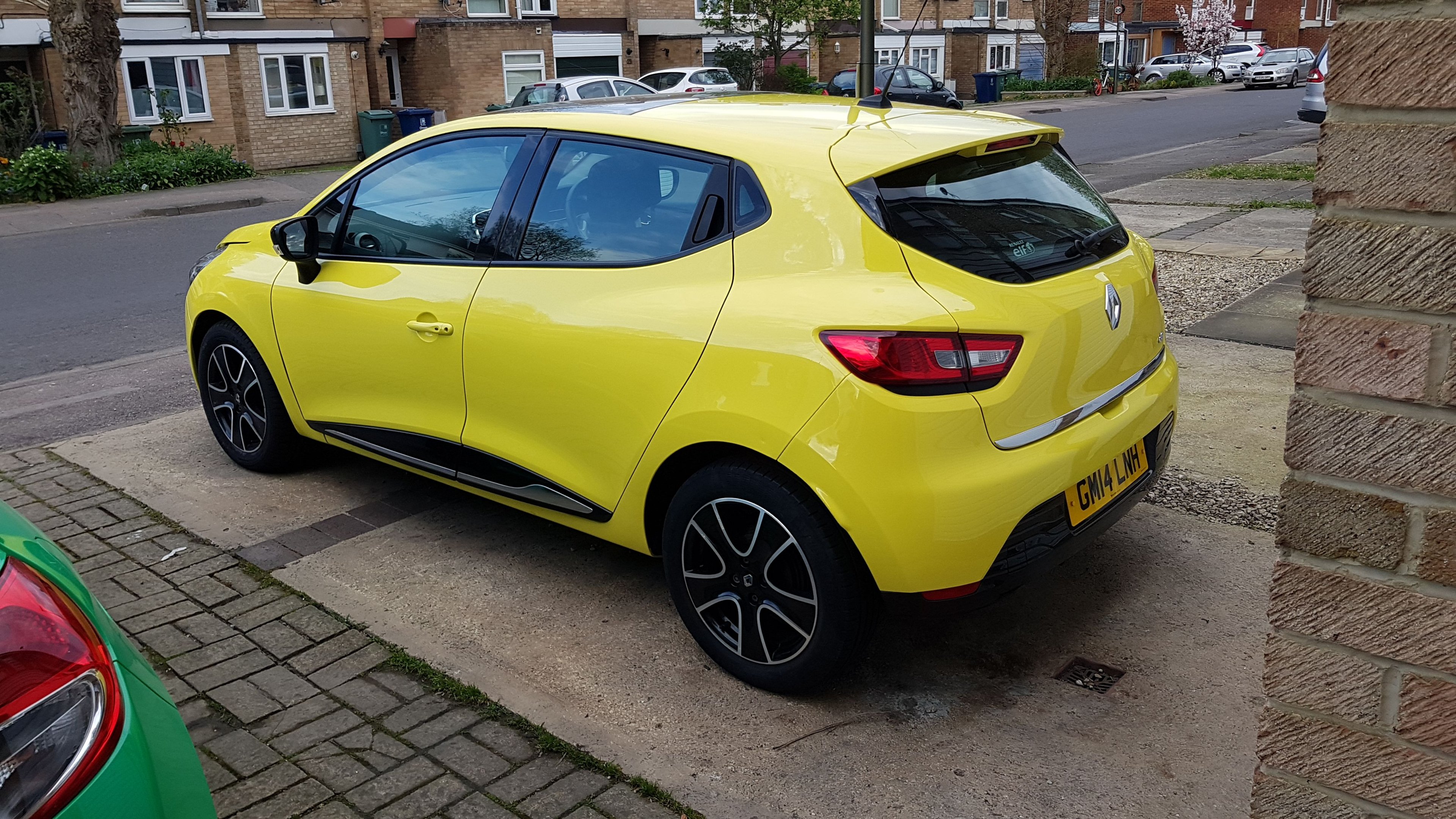 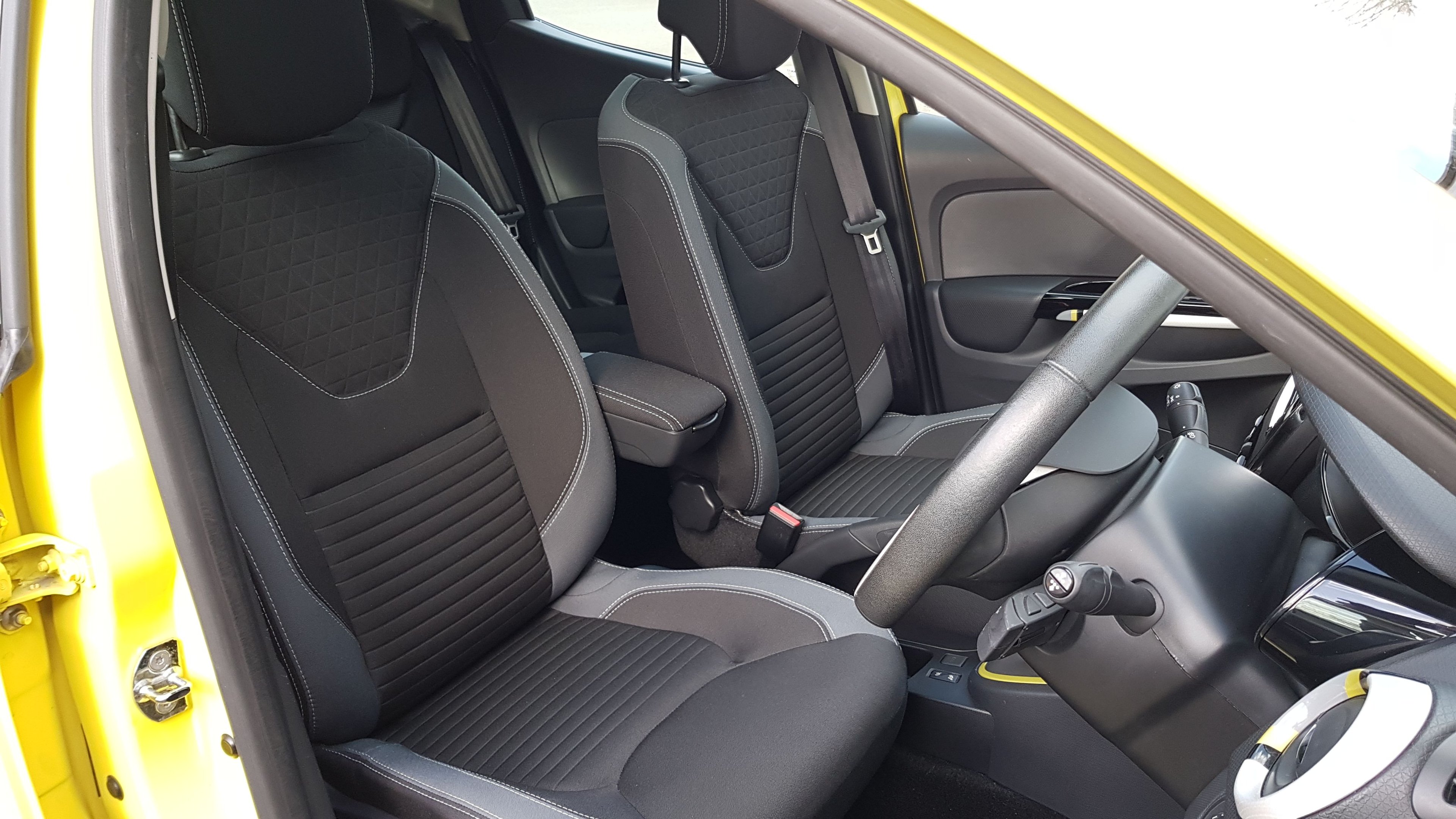 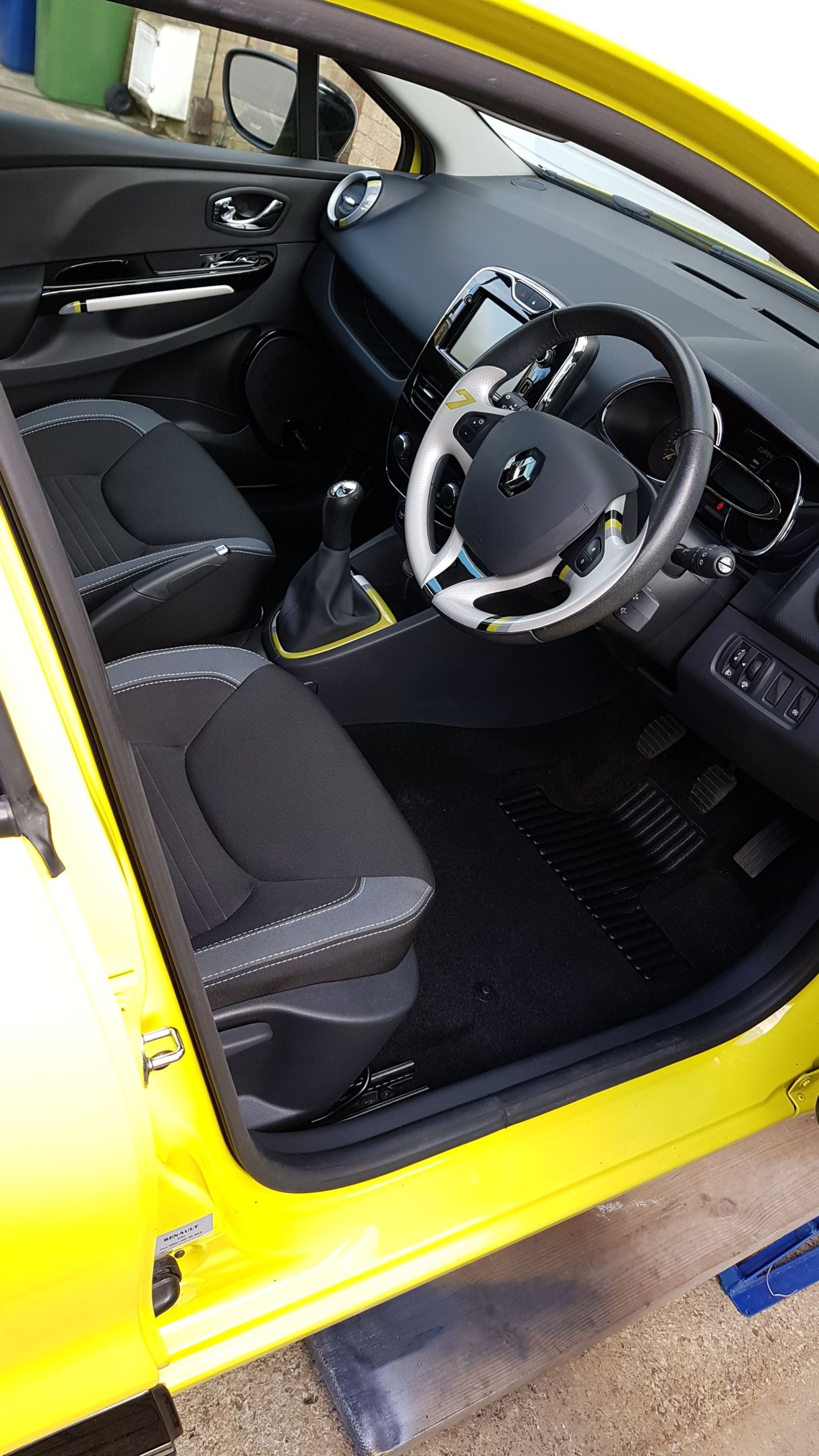 Alfa Mito QV
First 10 minutes of driving this back felt like driving the mk4 edc, kept trying to go for the paddles to change gear managed 64mpg even with the wheel that far back in the arch, but it was lovely to drive!

ClioSport Club Member
BG 182
That transformation from the first pic to now is crazy! Expect nothing else from you Gus.

Would never be able to tell it was a category car. Who cares either for that price!

Is it bad that I kind of like the steering wheel... Does the white bit pop off? Would look good a gloss black or anthracite!

ClioSport Moderator
182Turbo,DCi90
Not abad idea Louis ! Might try and see if the plastic fascia bit bit pops off. Perhaps have it dipped in carbon or resprayed.

ClioSport Club Member
Inferno 182 Cup
That looks like a different car in those pictures, great work and an absolute steal!

ClioSport Club Member
Clio 200 RS EDC
I love the wifes, it's one of the few cars I've been able to genuinely comfy in.

If obviously drive ours badly (albeit in town) as I can get nowhere near that mpg!

Mind you ours in an edc so it moved around the box constantly!

ClioSport Club Member
BG 182
That's a steal and perfect for munching the miles. My Mrs has the edc dci and that's sat on 62 mpg after 28k in 2 years! She doesn't reset the trip and doesn't use cruise (typical woman!) so it's not too bad. We've had no issues with it at all and it's only been to Renault for a recall on the windscreen wipers. I would think the plastic part in the steering wheel should come off as ours is black.

Only one genuine scrapper on the forum. :up:

ClioSport Club Member
A special one.
What's it worth now bud, £5k or more?
You must log in or register to reply here.

172 Cup cutting out when cold.