Whilst ive been signed up on here a while, I never ended up getting a clio until about 4/5 months ago. When I first signed up on here 4 years ago I was looking for a 182 to get into trackdays, after winning an auction for a RB 182 on ebay I didn’t hear anything back for a few weeks so that fell through. In the mean time I went to the isle of man TT and decided that I needed a bike in my life finally and the money set aside for a track car went toward a getting my license and subsequently, a bike!

That ended up being a 2011 Triumph Street Triple R which I still have. Now Ive got that to where I want it, as a project it is “finished”, for now!

Ive had a few Renaults before this one, including a Clio 1.2, Megane 1.6 mk3 and then a Megane RS265 Cup. I then went German for a while with a Audi S5 which was a brilliant daily but lacked the feel and rawness of the 265. You could carry silly speeds into bends with that diff, still miss that car! After a brief stint in a 320d I decided on getting a 182, so here I am! In some ways its similar to the megane, in others totally different.

I bought the car on 70k on a 04 plate, from a forum member and with plenty of service history. Pretty standard other than HEL braided lines all round. There is some bodywork scuffs and a couple of dings to sort out but nothing abit of paint and some machining cant solve. The Standard wheels weren’t in the best of condition but more on that later!

Not a lot of pics of the car and progress for now, I never envisaged making a progress thread initially but there will be more to come.

With the situation at the moment I’ve been on and off furlough so took the time to get a few things done and of course spend more than i’d want! Man maths and all.

Generally clean other than the rear beam prior to being taken out. There was a few bits of surface rust along the rear of the underbody and the rear beam brackets that was treated while the beam and exhaust were out with abit of Bilt Hamber Electrox, Hammerite and a couple of coats of Bilt Hamber Dynax UB.

Have to say the ARB Bushes weren’t quite as bad as I’d thought they would be! Done them on jack stands with the help of guide on here. I had to cut half the foot off a g clamp to make sure I had enough room for mole grips but must be able to be done without. Think I done it quicker than the rack bushes too!

The next job(s) will be refreshing the rest of the front end. Got some new genuine wishbones to go in, need to get some tie rods and TRE’s too. The previous owner replaced the springs so it will only be the top mounts and shocks left, which look fine for now.

Have to say paying for the membership on here is the best tenner I’ve spent. If there is something not known on here it isn’t worth knowing. Been great following a few progress threads on here for abit of inspiration/empty pockets.

And to answer the age old question.. Titanium Silver is by far the fastest colour!

ClioSport Club Member
Titanium 182
Next up was cleaning out the front arches and sills. Definitely worthwhile, so much compacted dirt between the arch liners and side skirts. The arches, arch liners, skirts and sills were given a couple of passes with BH Surfex HD and AF Oblitarate, liners coated in AF Dressle. Any rust was ground back and treated with some electrox and hammerite. Sills were given a coat of dynax UB on top for good measure. 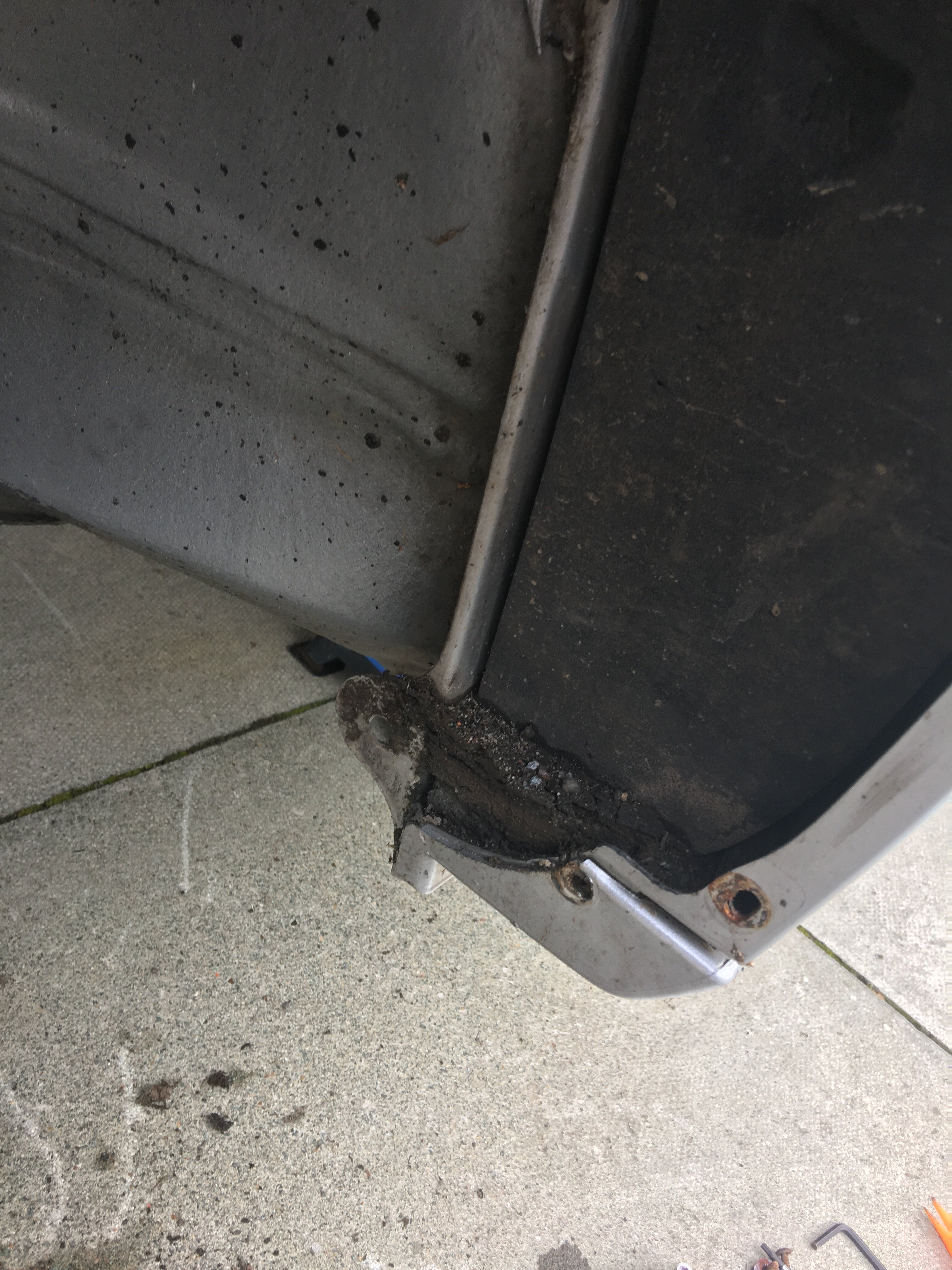 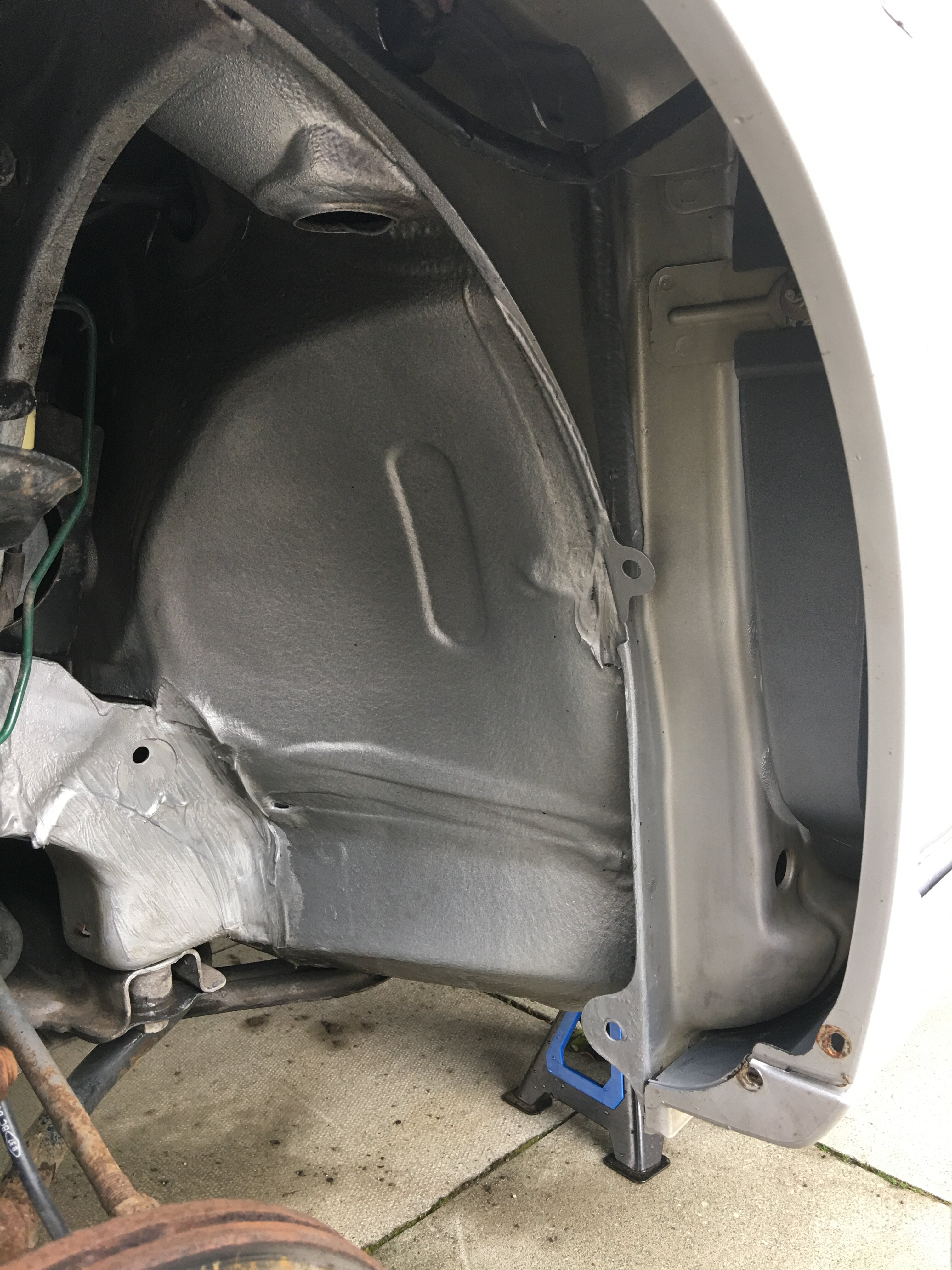 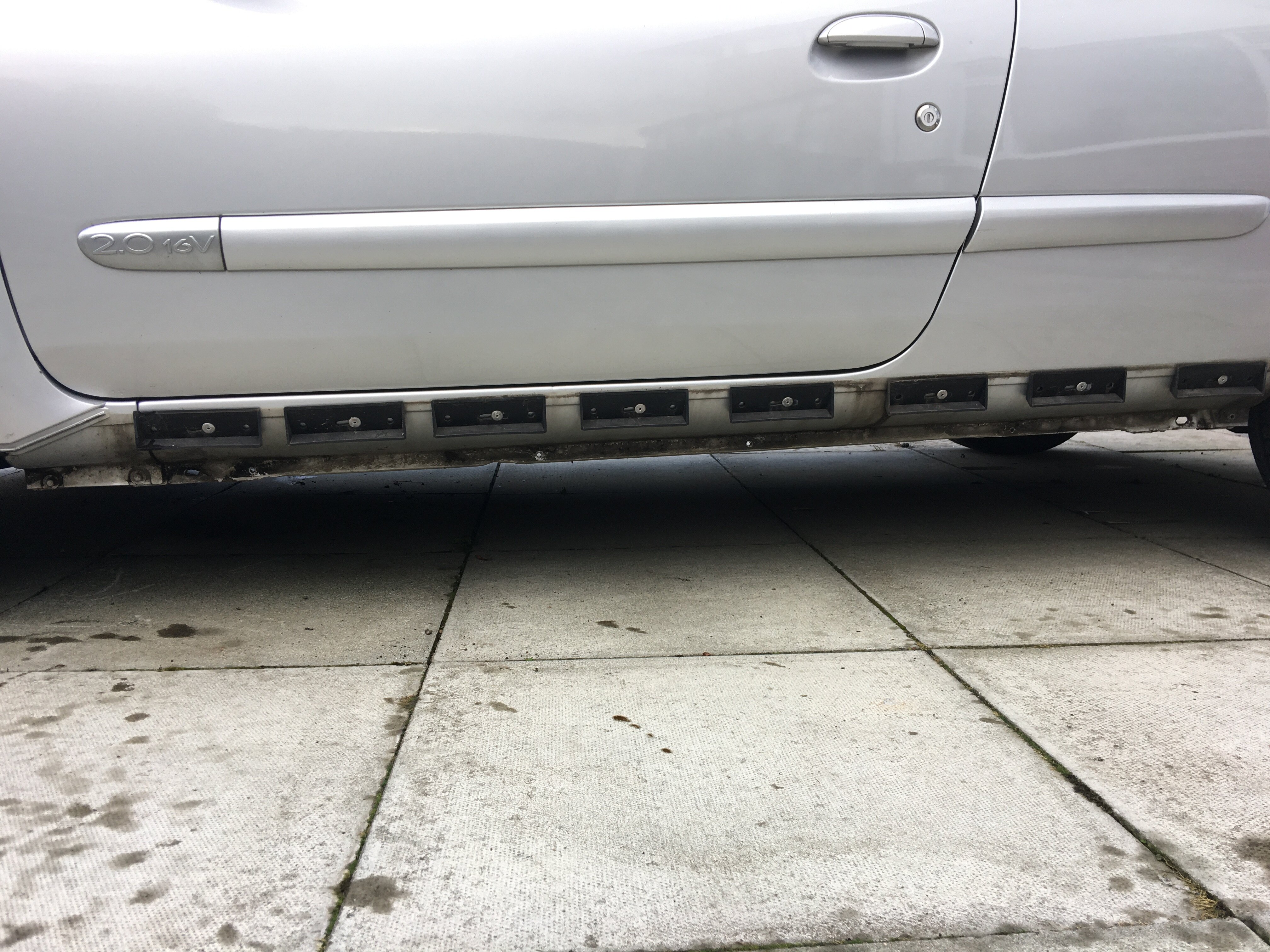 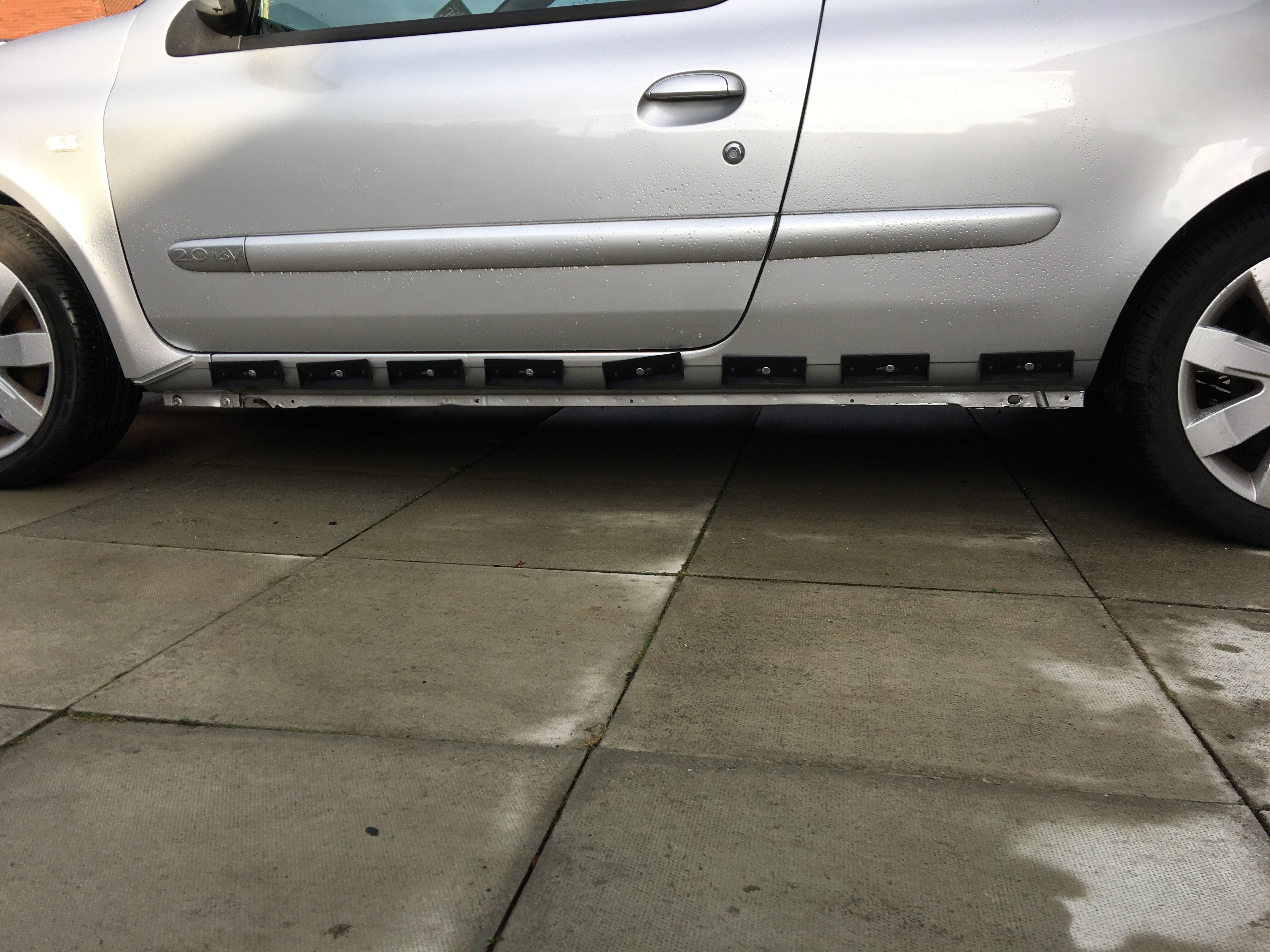 Ive been keeping a look out for a set of turinis since ive had the car as the standard wheels look a little tired to say the least. A few weeks ago I found a set of 172 cup turinis on ebay in good condition with ps3’s all round for a reasonable price and local to me! Couldn’t say no! 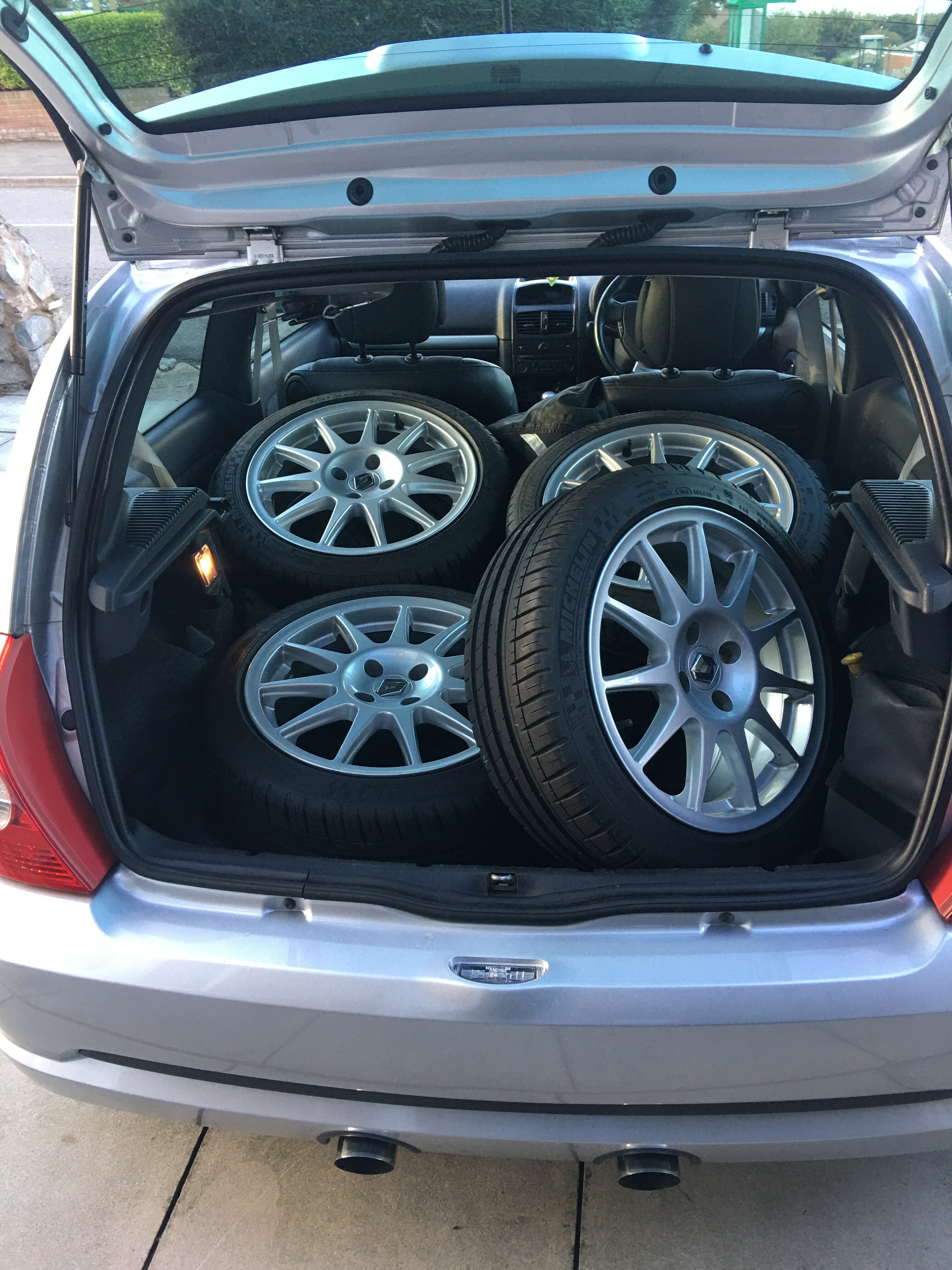 ClioSport Club Member
Titanium 182
Pics are from before sorting the sills out. Really need to take more pictures in future!

Also can a moderator please change my title from !82 to 182 if possible please

ClioSport Club Member
Titanium 182
Few little bits I missed off.
Cabin filter changed, not the worst but worth doing for a few quid. 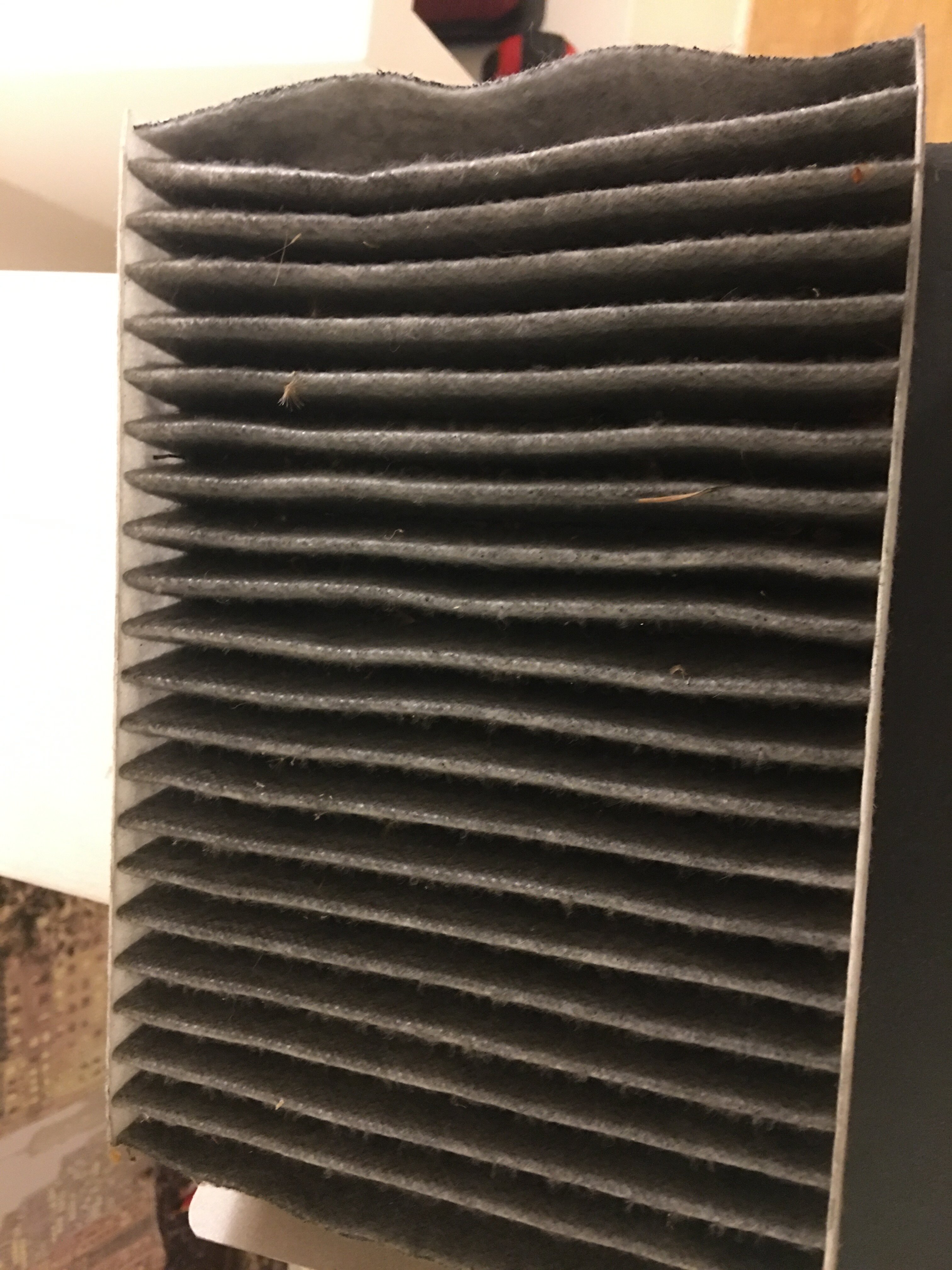 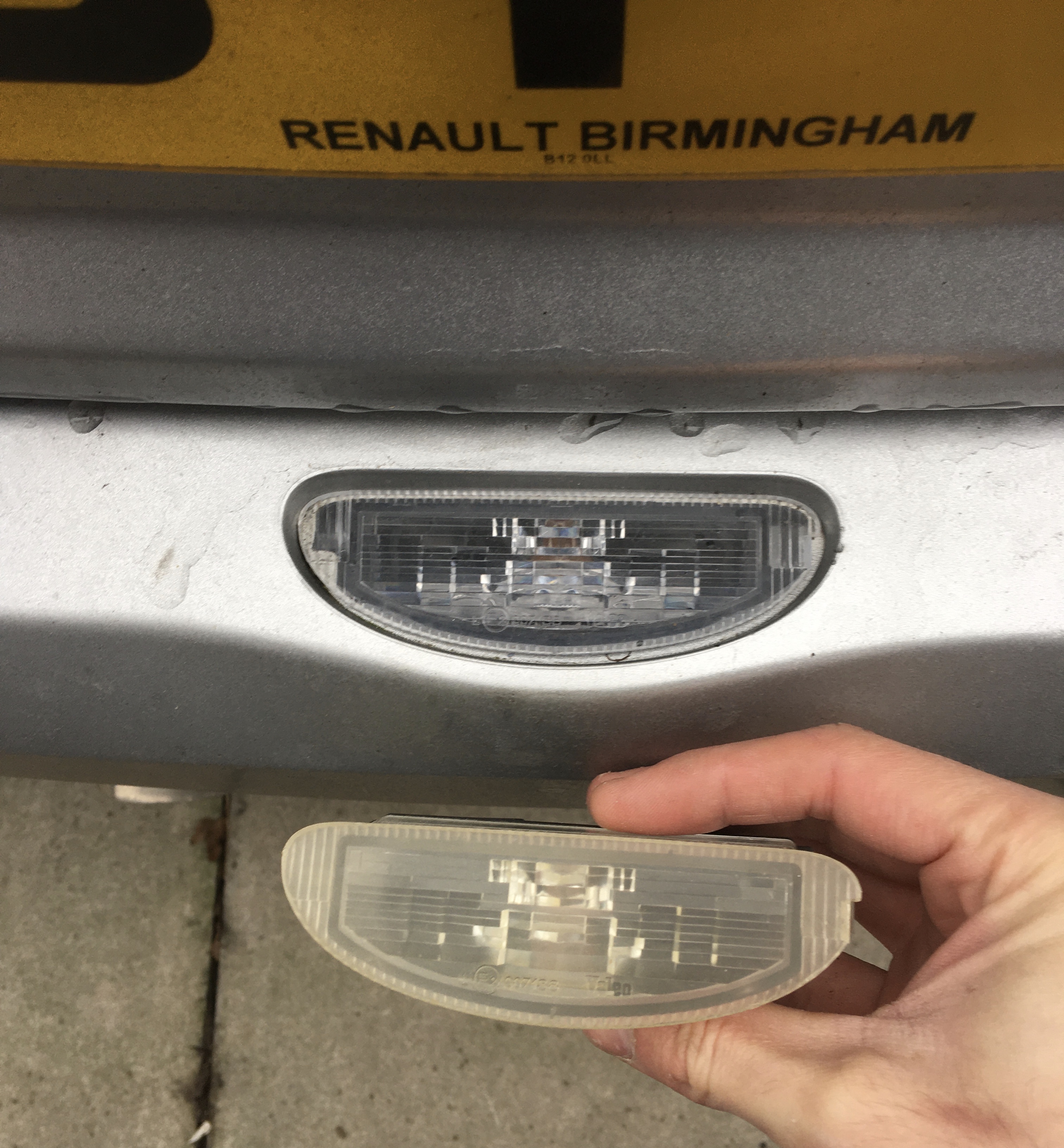 Latest gen Fiesta aerial. About half the size of the Renault one, no difference in signal and looks OEM. 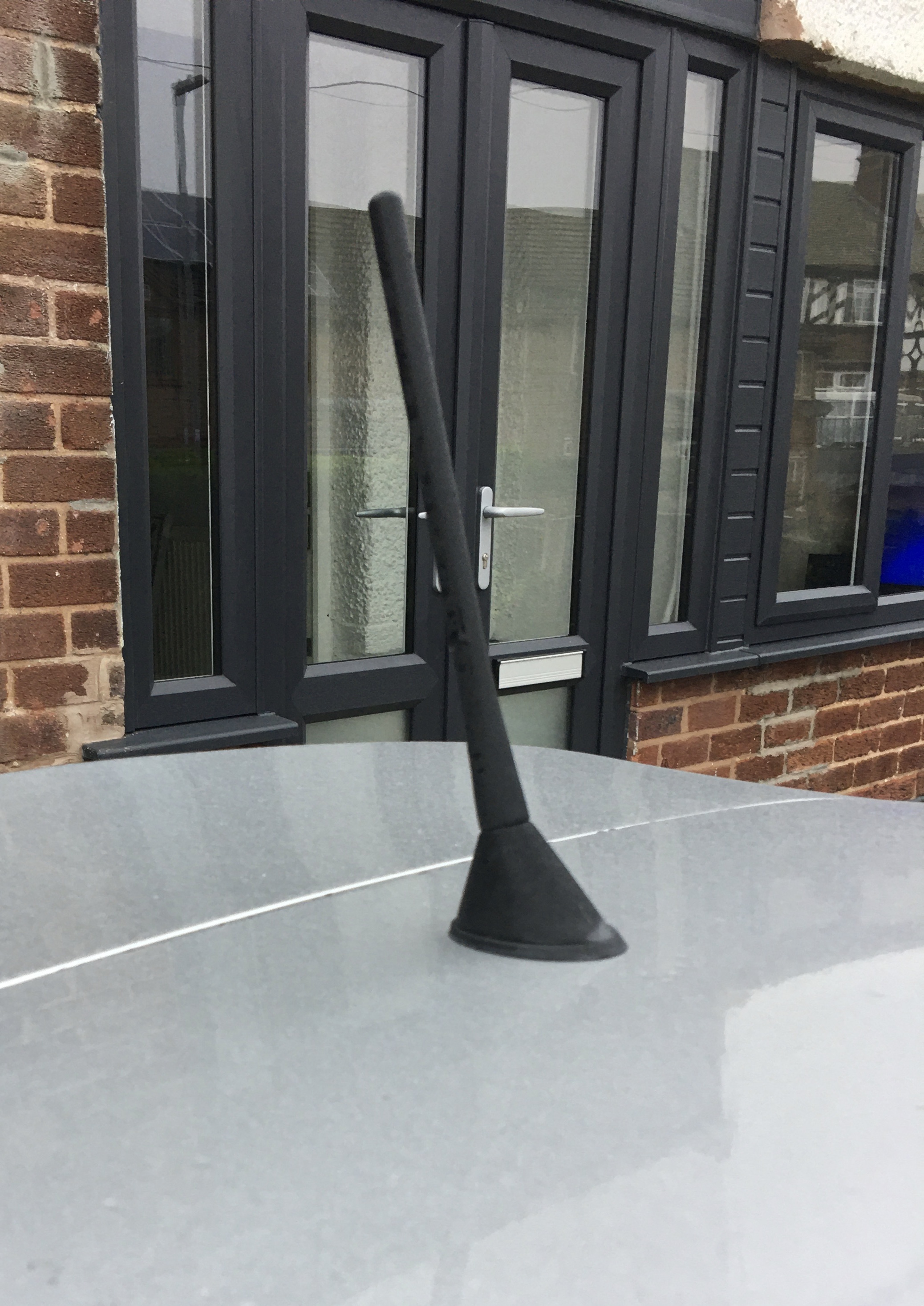 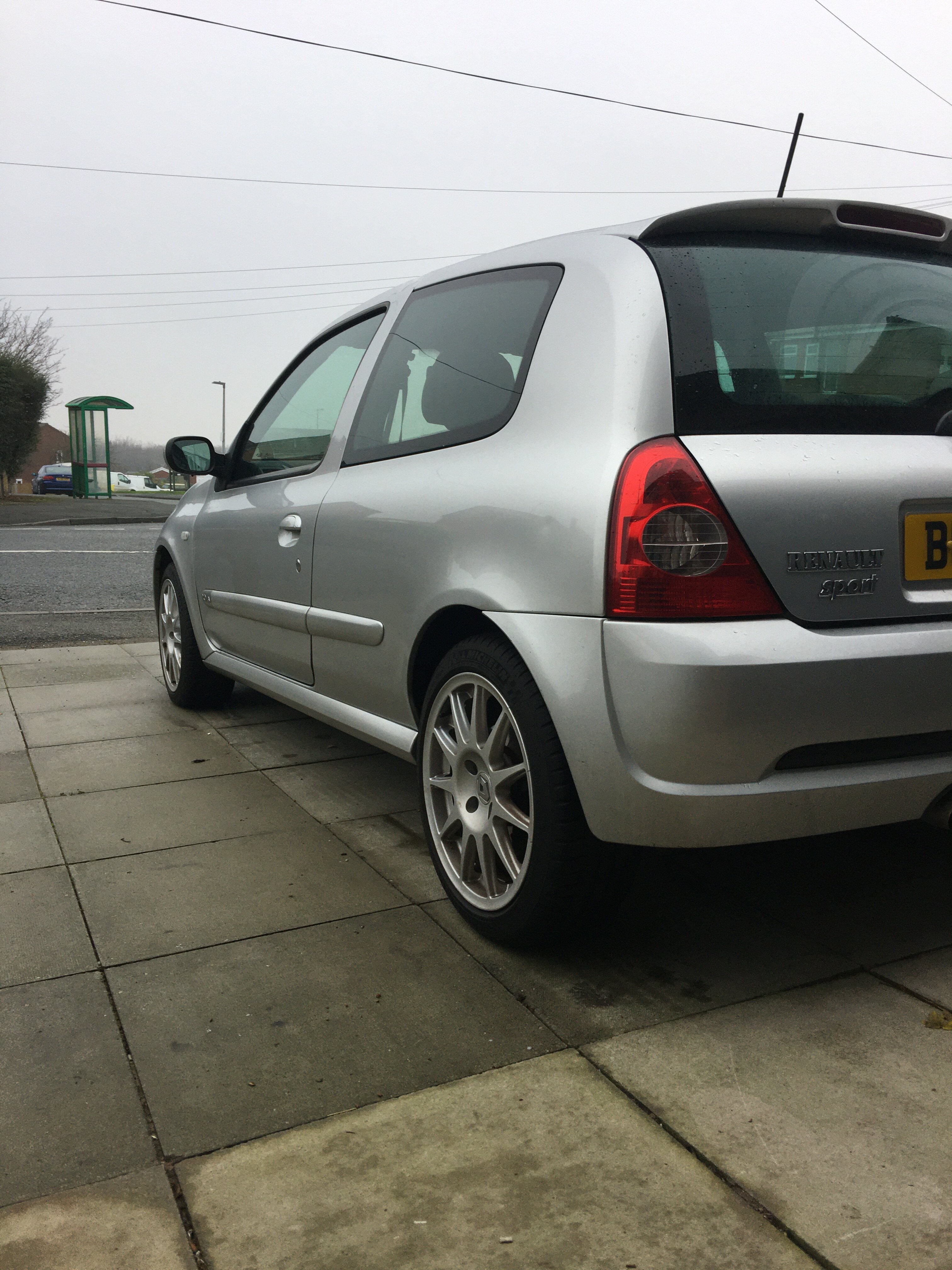 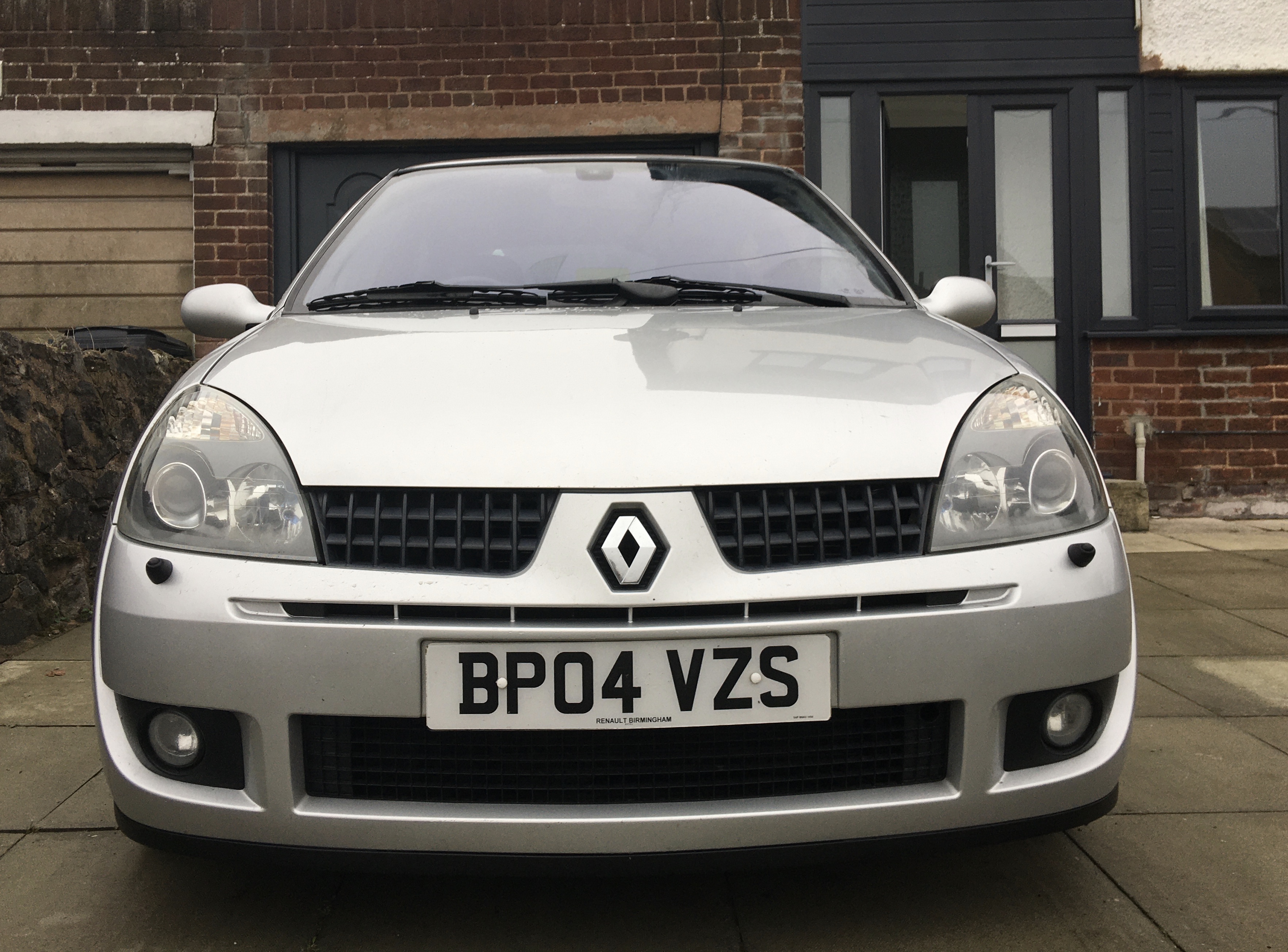 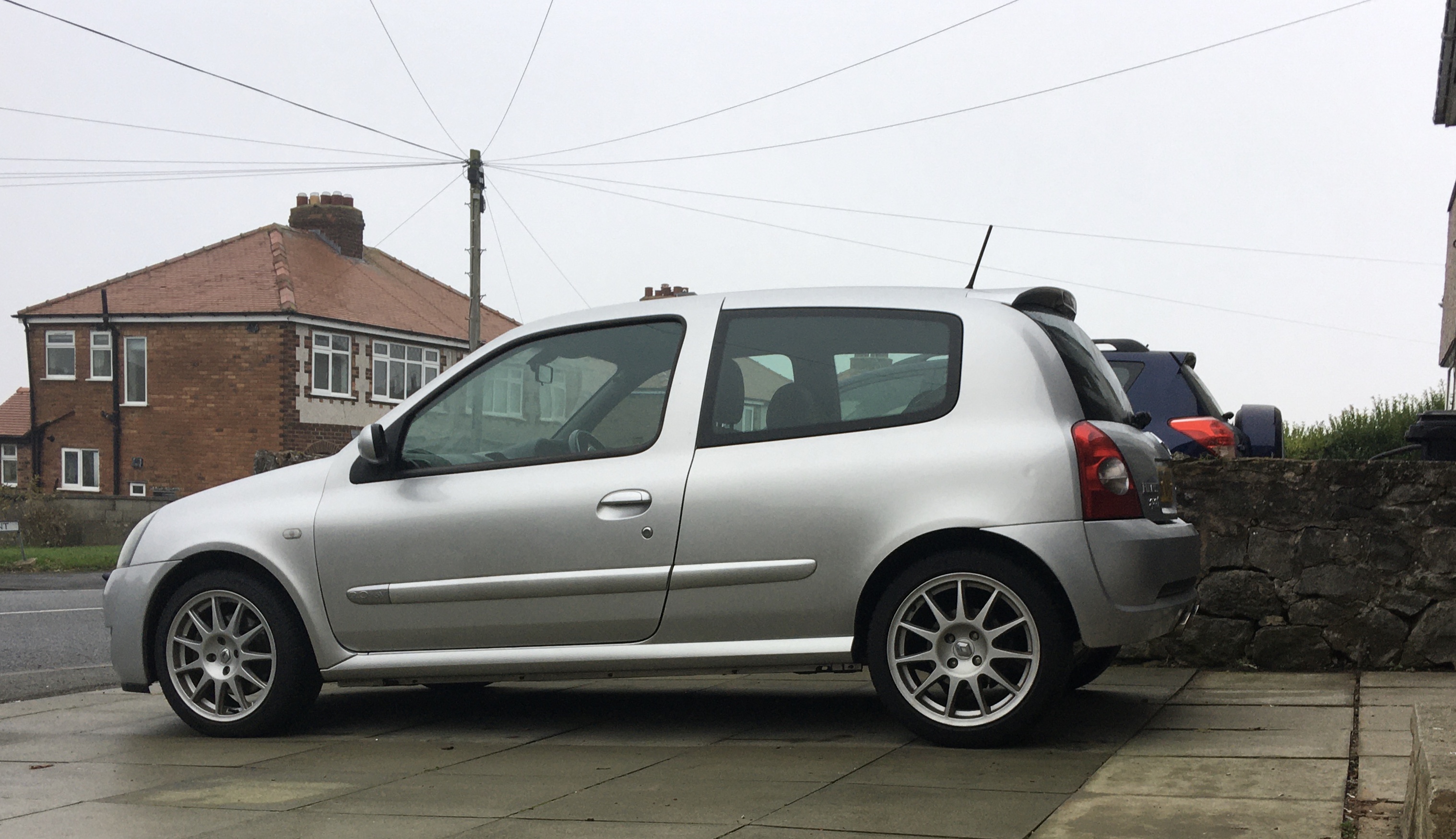 Titanium is so hard to photo. It either looks so bright and white silver, or brown

Titanium is so hard to photo. It either looks so bright and white silver, or brown

It really is! Probably the best silver I've seen, a lot more flake in the paint than most silvers you see I think. Looks better in the flesh anyway.

ClioSport Club Member
182
Not that hard to photo 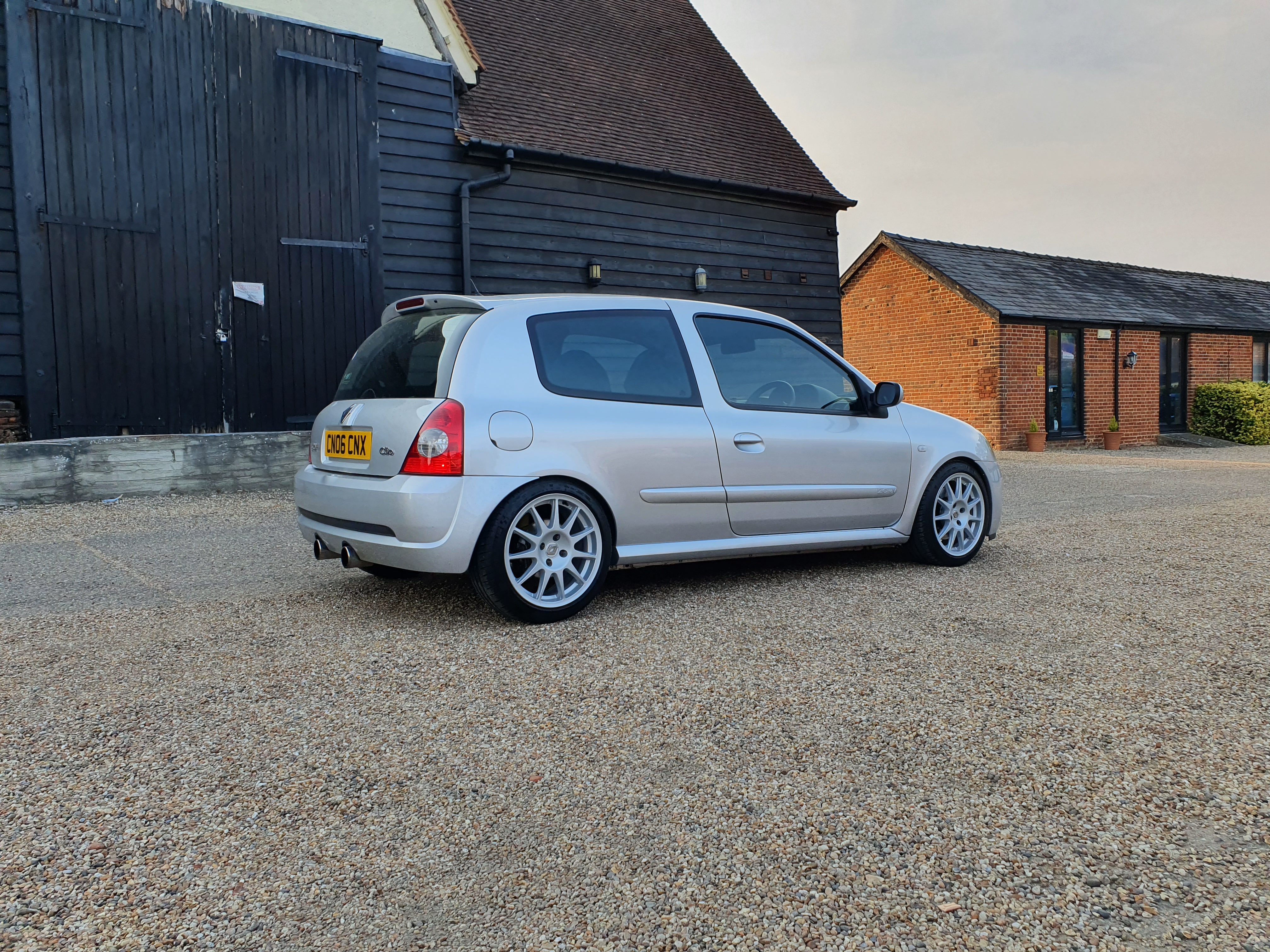 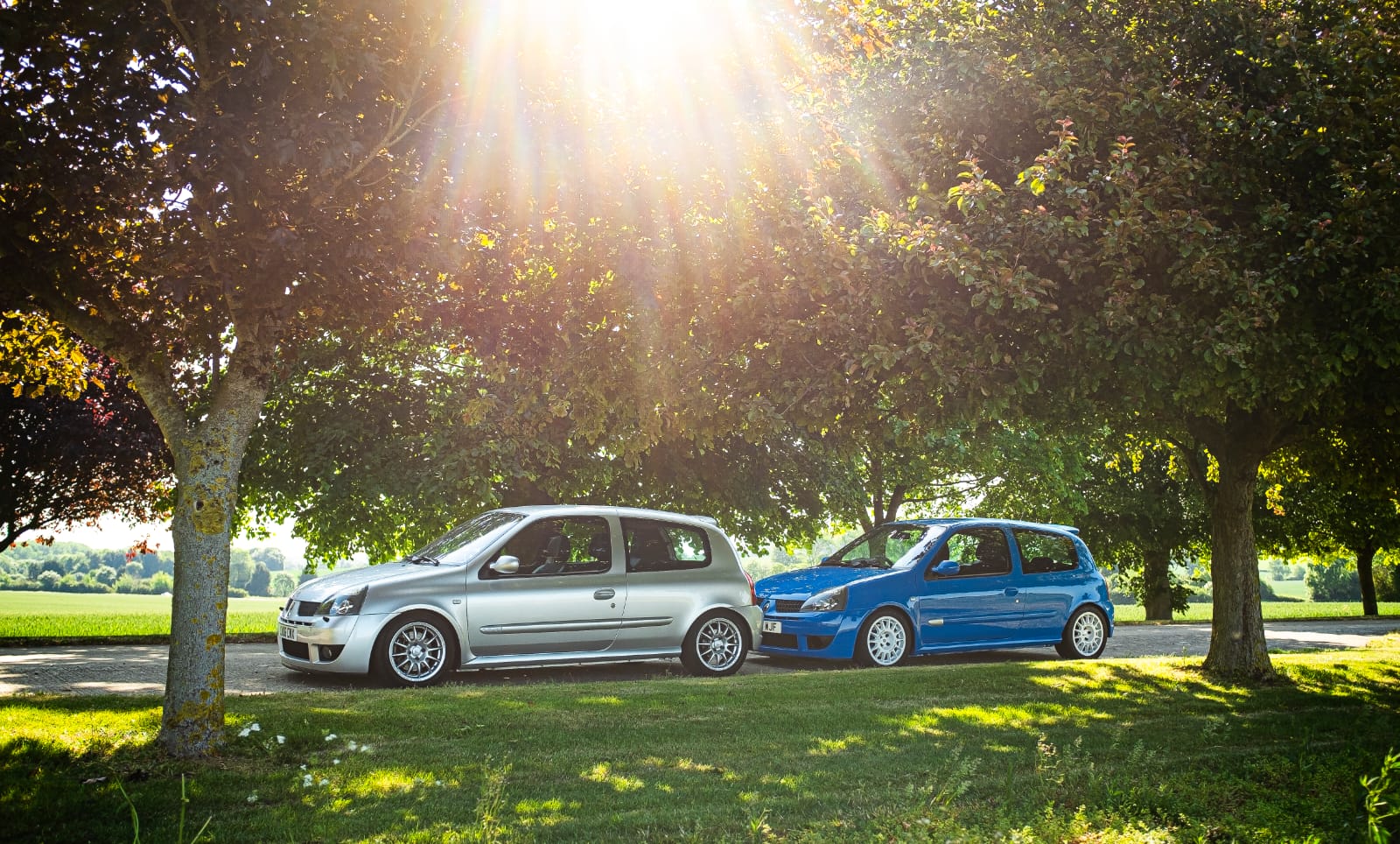 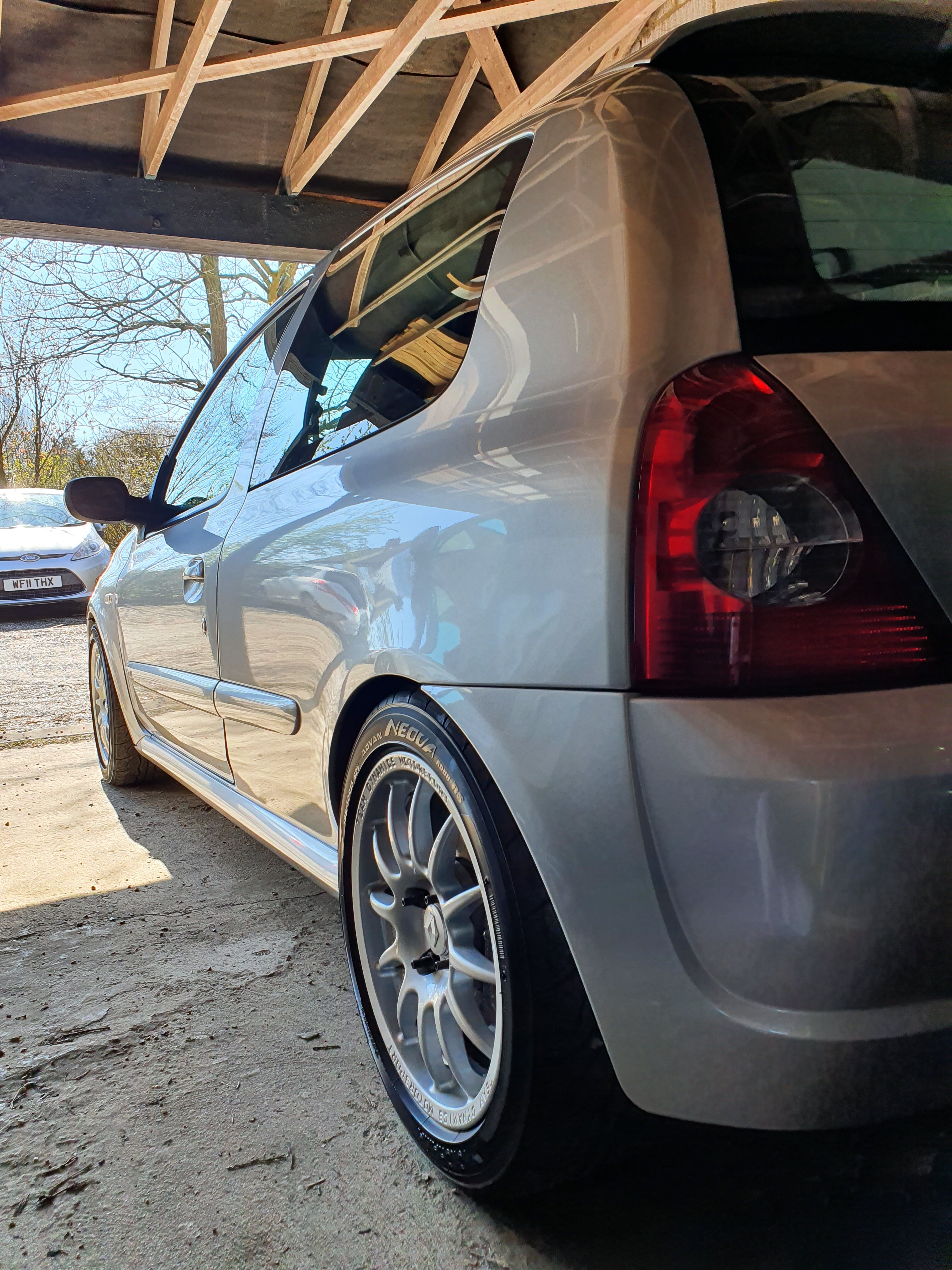 Think I've seen these on your project thread before, stance looks perfect! Makes me want to address the arch gap on mine, perhaps some springs in the future. And something better than my 3yr old iPhone for taking pics

2nd pic really shows off how bright and metallic titanium is.

I can see why you may think that now anyway Nick
Hope you and the wife are well!

ClioSport Club Member
That looks great! That aerial looks a lot better than the standard one.

MrBlonde said:
Not that hard to photo

Ambo said:
Ha ha! We are thanks, and you?
Click to expand...

Good to hear! Great thanks, keeping busy with the car and house

everything turns into a project ha!

msco0207 said:
Good to hear! Great thanks, keeping busy with the car and house

everything turns into a project ha!
Click to expand...

Pleased to hear too! Same here really, but more on the house side of things at the moment. New kitchen time, but hopefully plenty of brownie points too Plenty of toy related things to do🏍

ClioSport Club Member
Racing Blue 182
I love reading threads where people do maintenence things as well as mods. Always good to read the car going into them.

Ambo said:
Pleased to hear too! Same here really, but more on the house side of things at the moment. New kitchen time, but hopefully plenty of brownie points too Plenty of toy related things to do🏍

The brownie points always come in handy for the latter

plenty of good roads round you for the toys too. Found out on the bike not too long ago

Dr Jekyll said:
I love reading threads where people do maintenence things as well as mods. Always good to read the car going into them.
Click to expand...

Thanks mate, like the idea of OEM+ as its a road car. Upgrading where its cost effective compared to standard parts/man maths kicks in!

ClioSport Club Member
Titanium 182
Last week I met up with @MLB . Nice to have a chat about clios and that. First time ive seen Petrol Blue in the flesh, looks great! Properly sorted motor too with 197 brembos and a rs2 inlet! 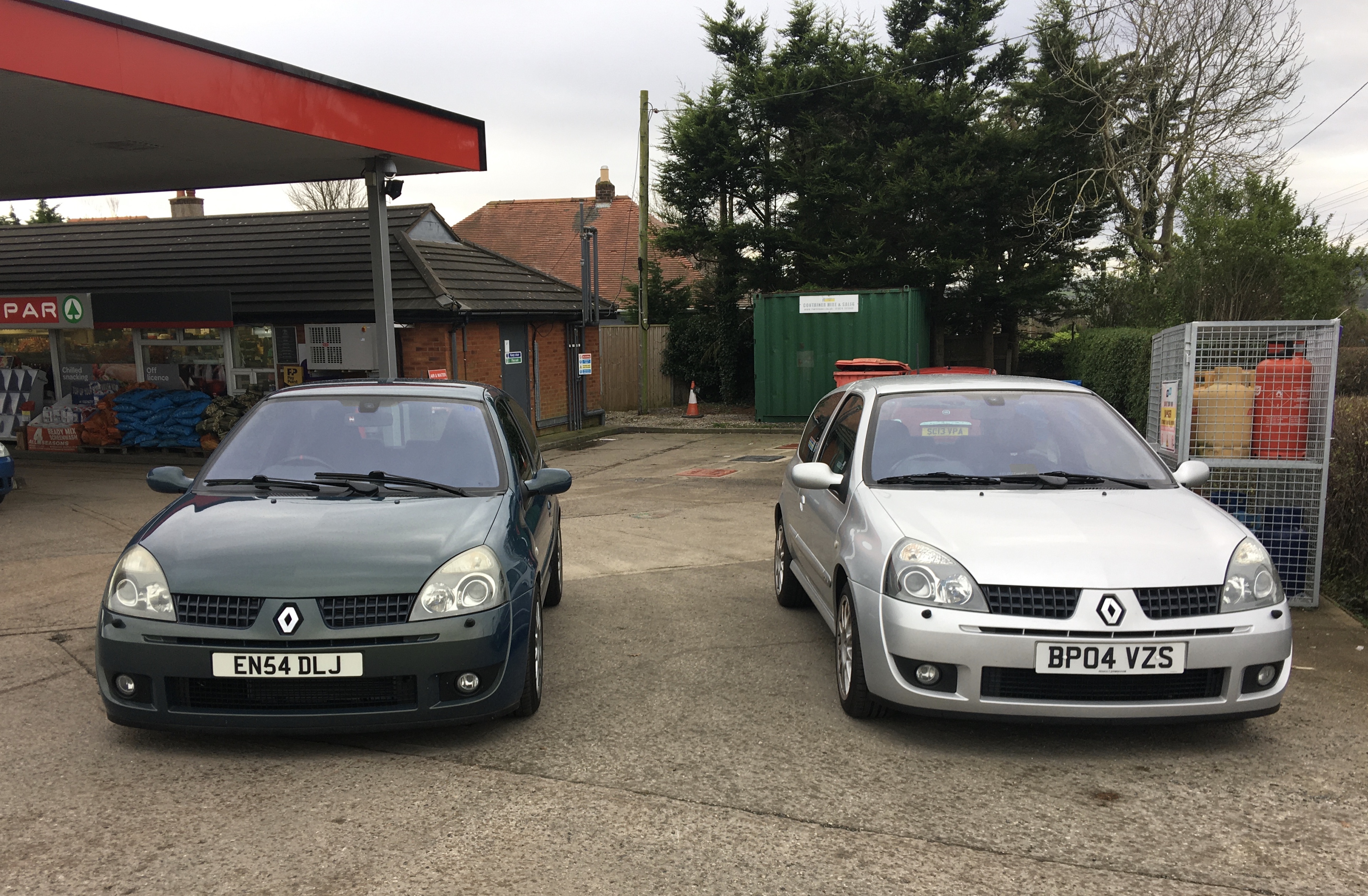 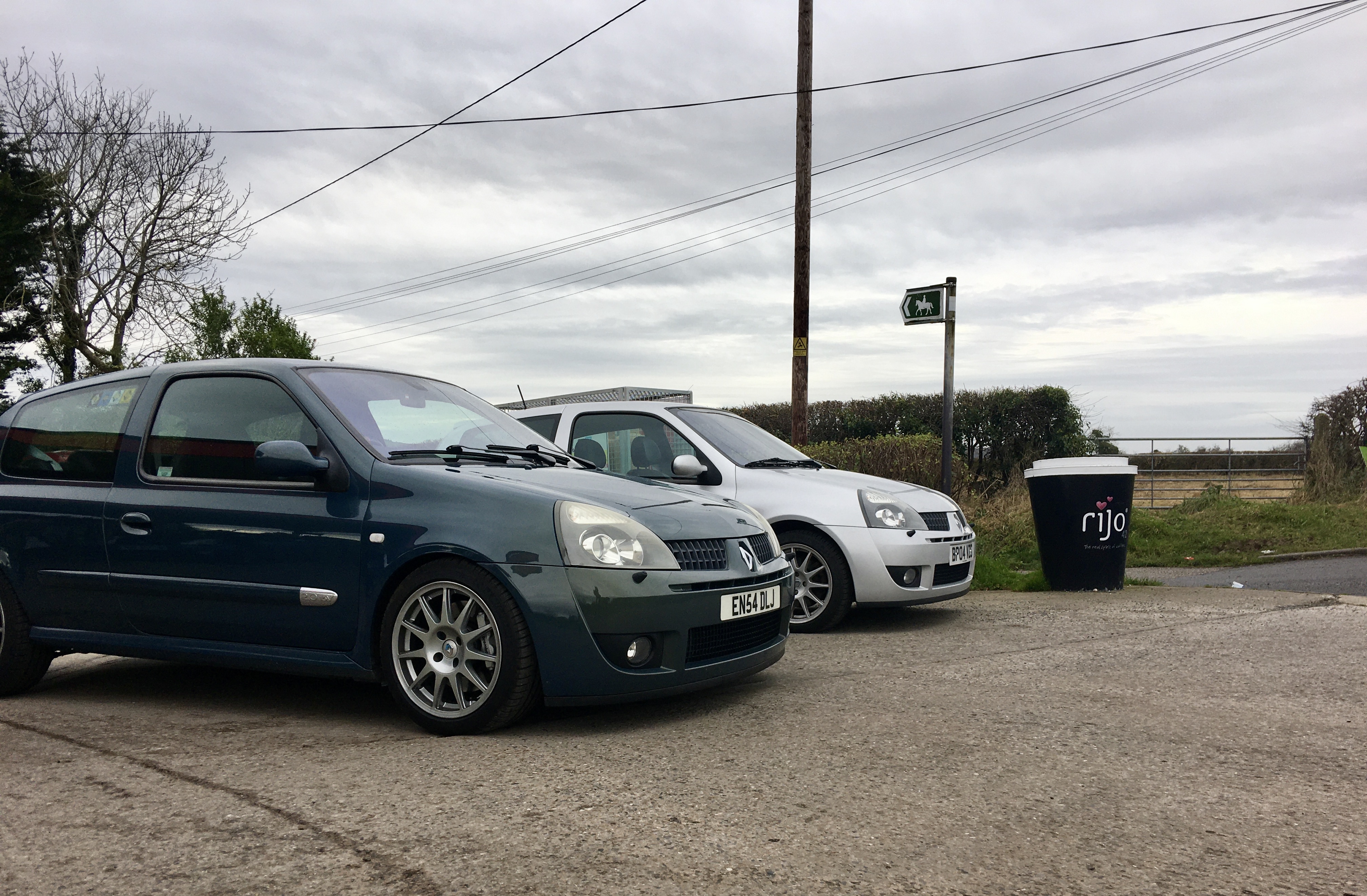 Photography skills were on point here, couldn’t have picked a better backdrop

ClioSport Club Member
Titanium 182
This week ive been carrying on the front end refresh, had a collection of parts building up for a little while now so it was good to finally get them all fitted! 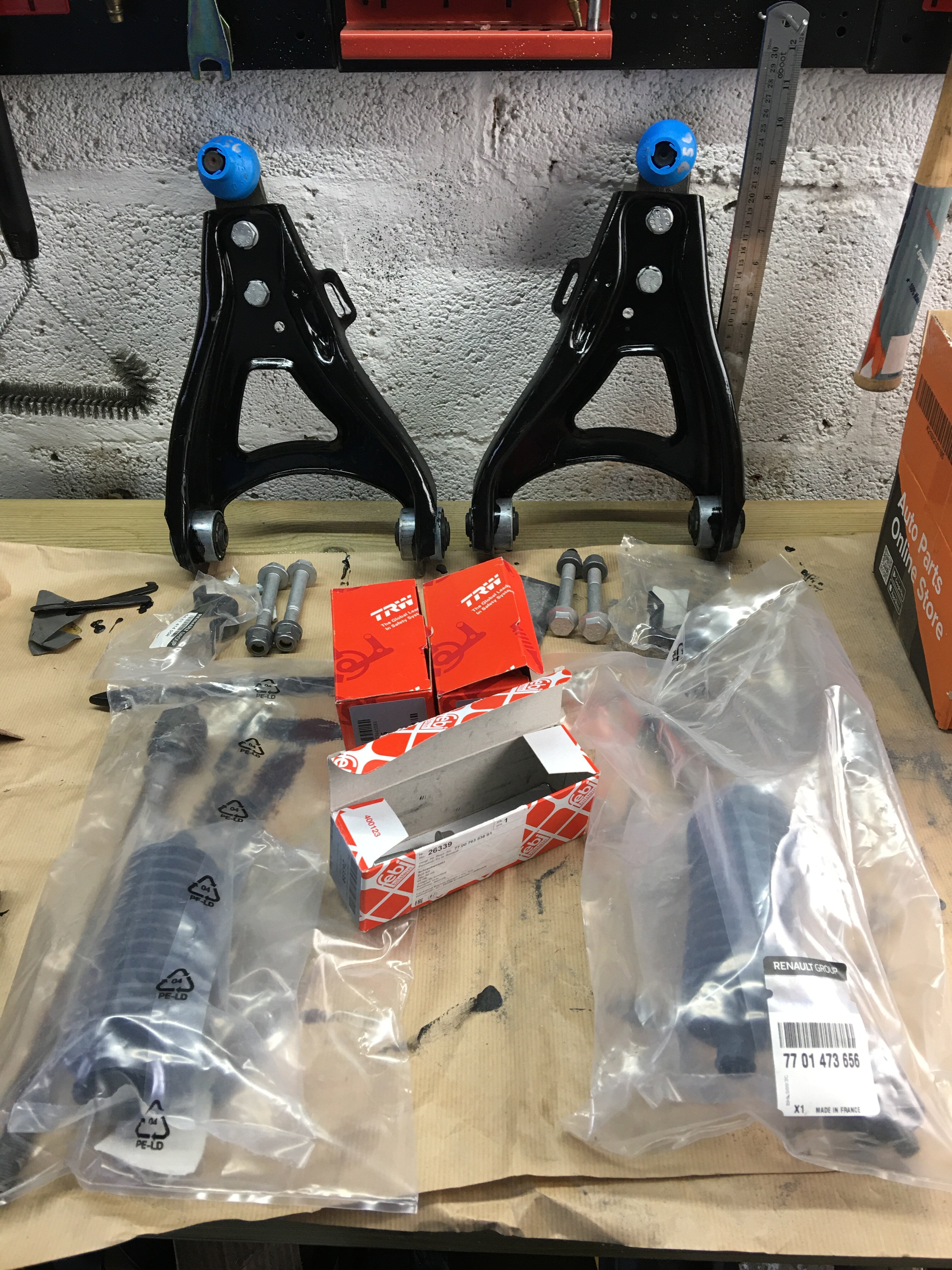 The wishbones got a coating of BH epoxy mastic before fitting just to give a little more protection. I give all the bolts a wire brush and a coat of plusgas beforehand, but wasn’t going to f**k around so the big guns came out. 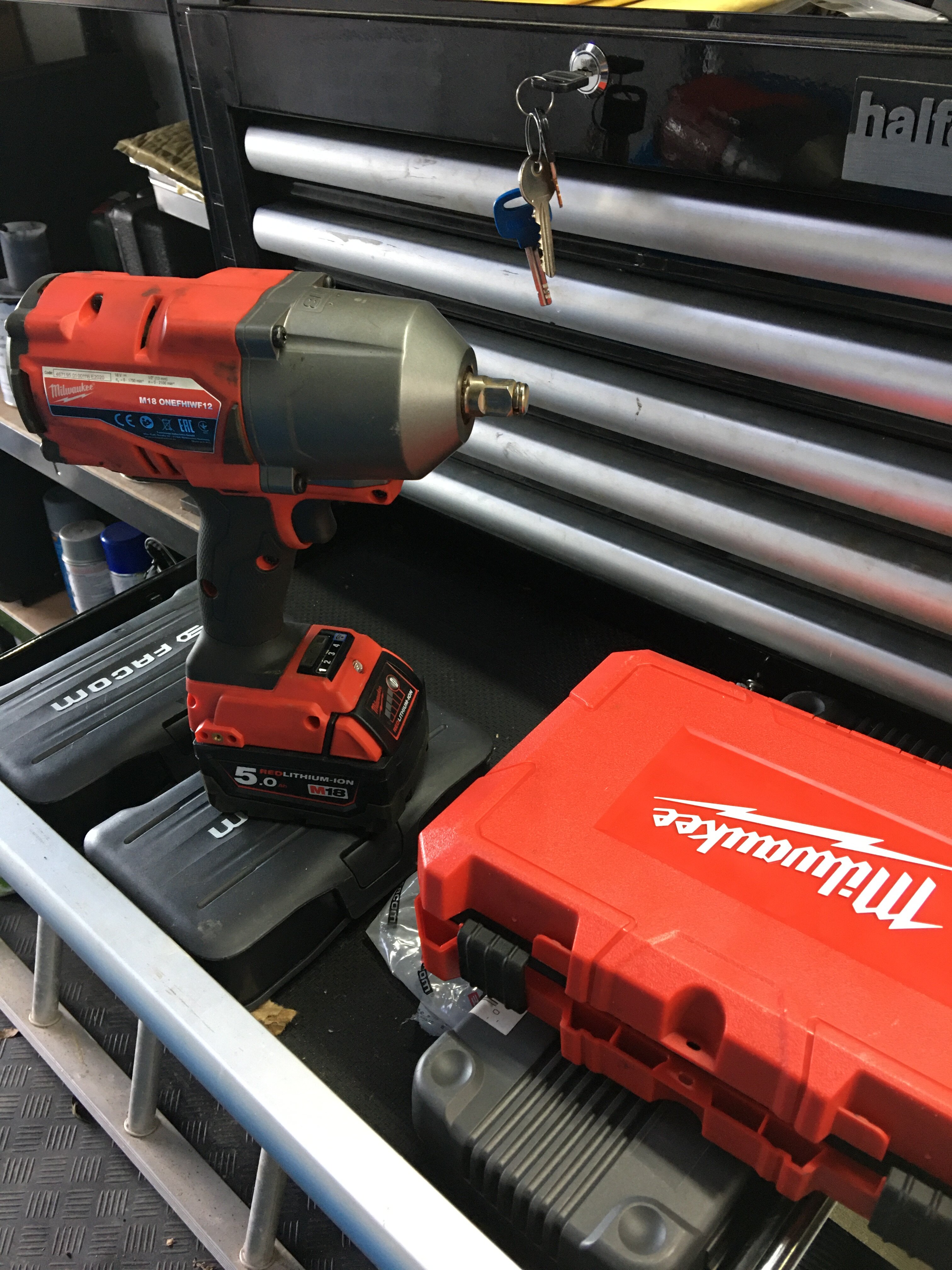 Threads measured up for comparison. 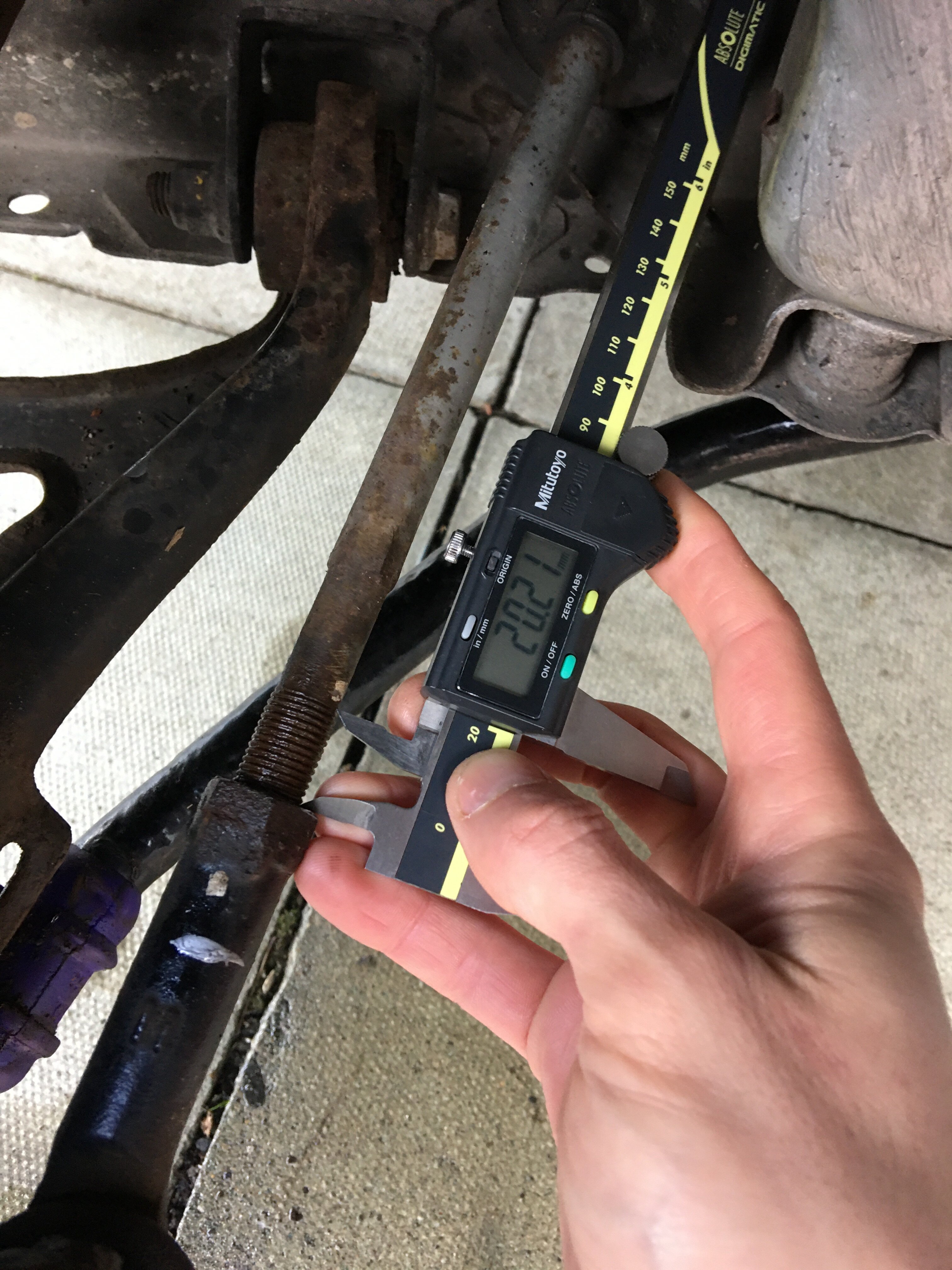 Safe to say they the tie rods were due changing.


Got a tie rod tool off amazon, makes the job so easy. 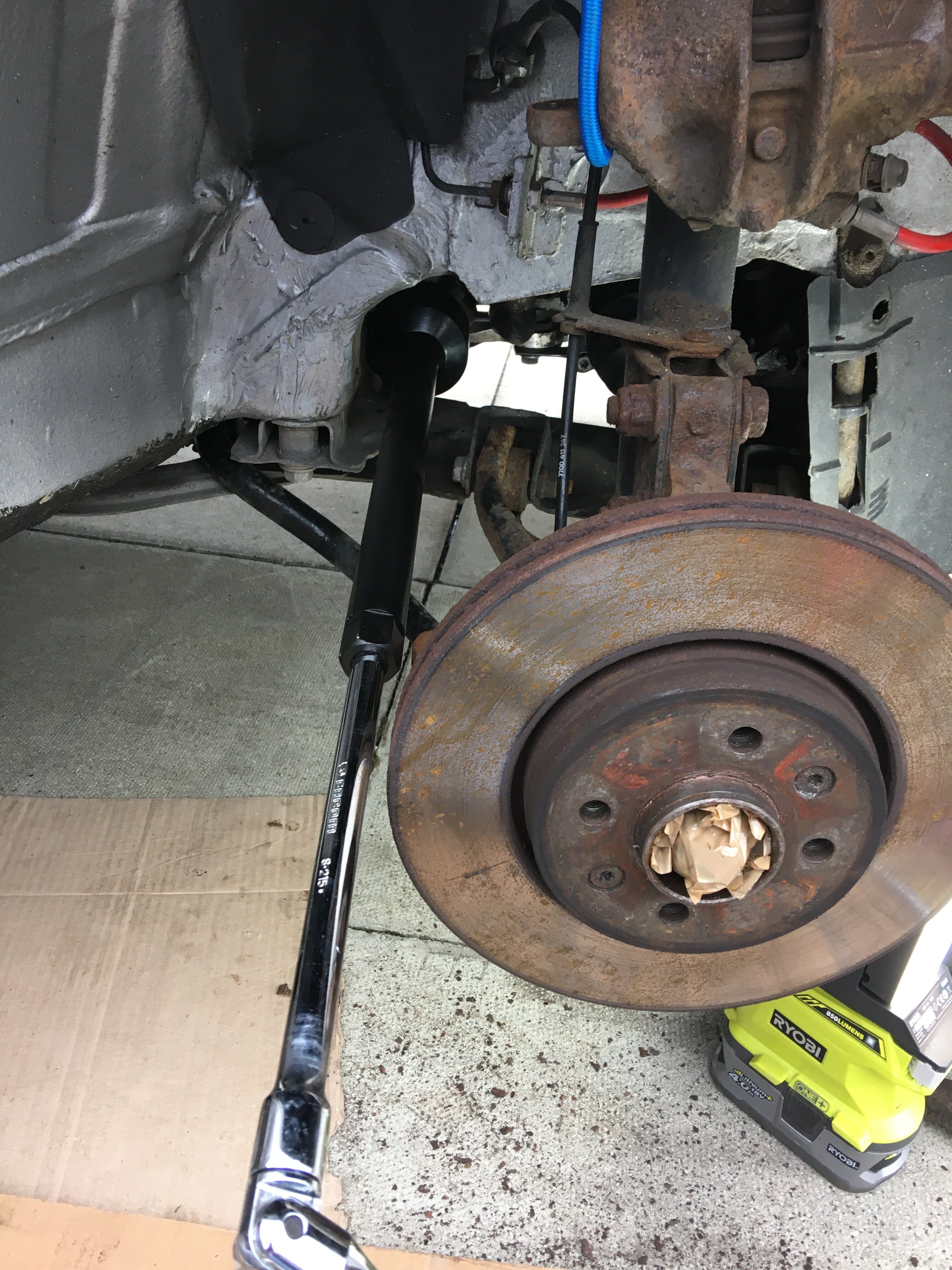 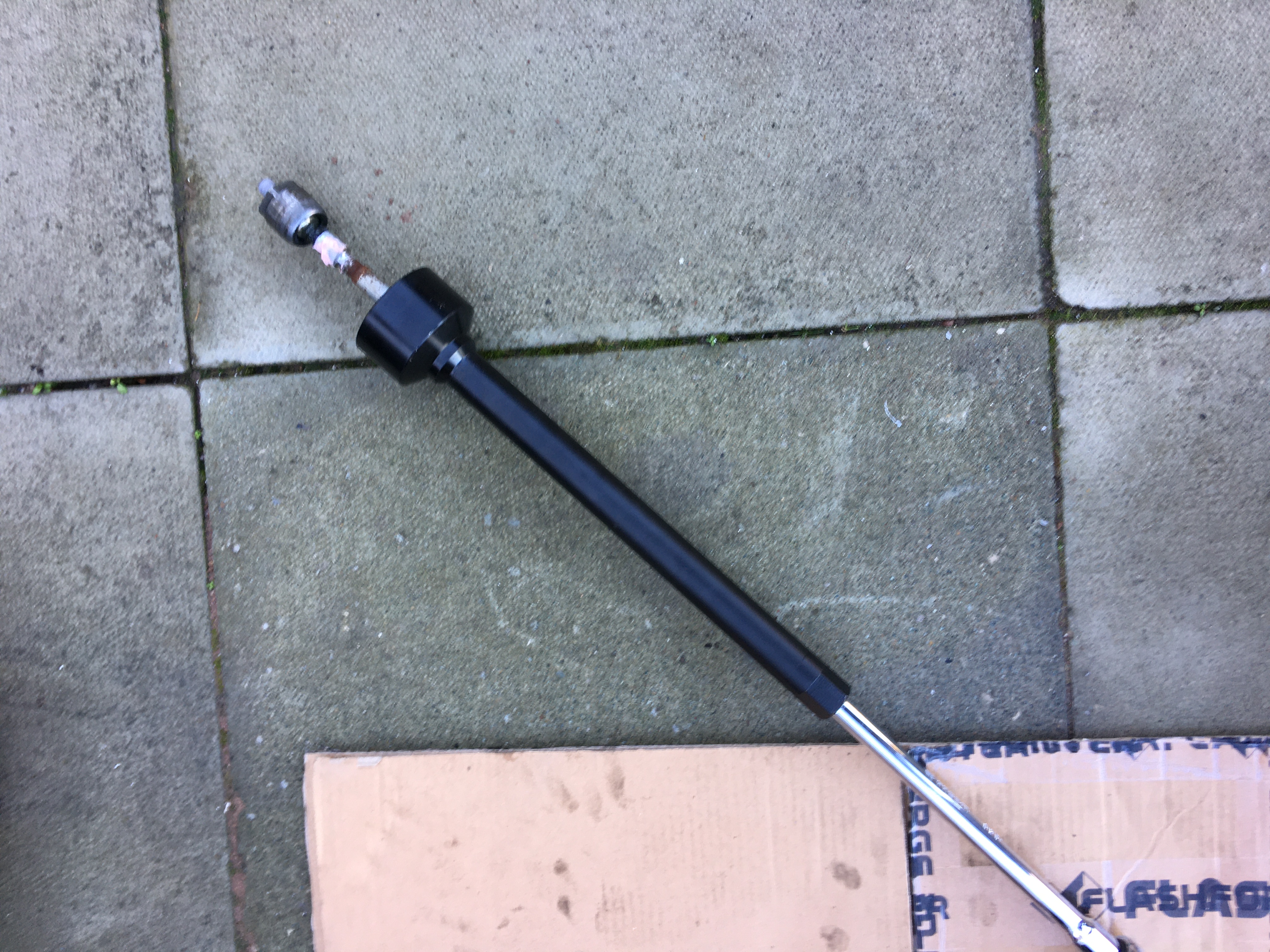 Gave the callipers and carriers a clean up in and out just to get rid of the worst of the pad deposits and rust for now with a wire brush and dremel. Pads cleaned up and sliders cleaned and regreased too. 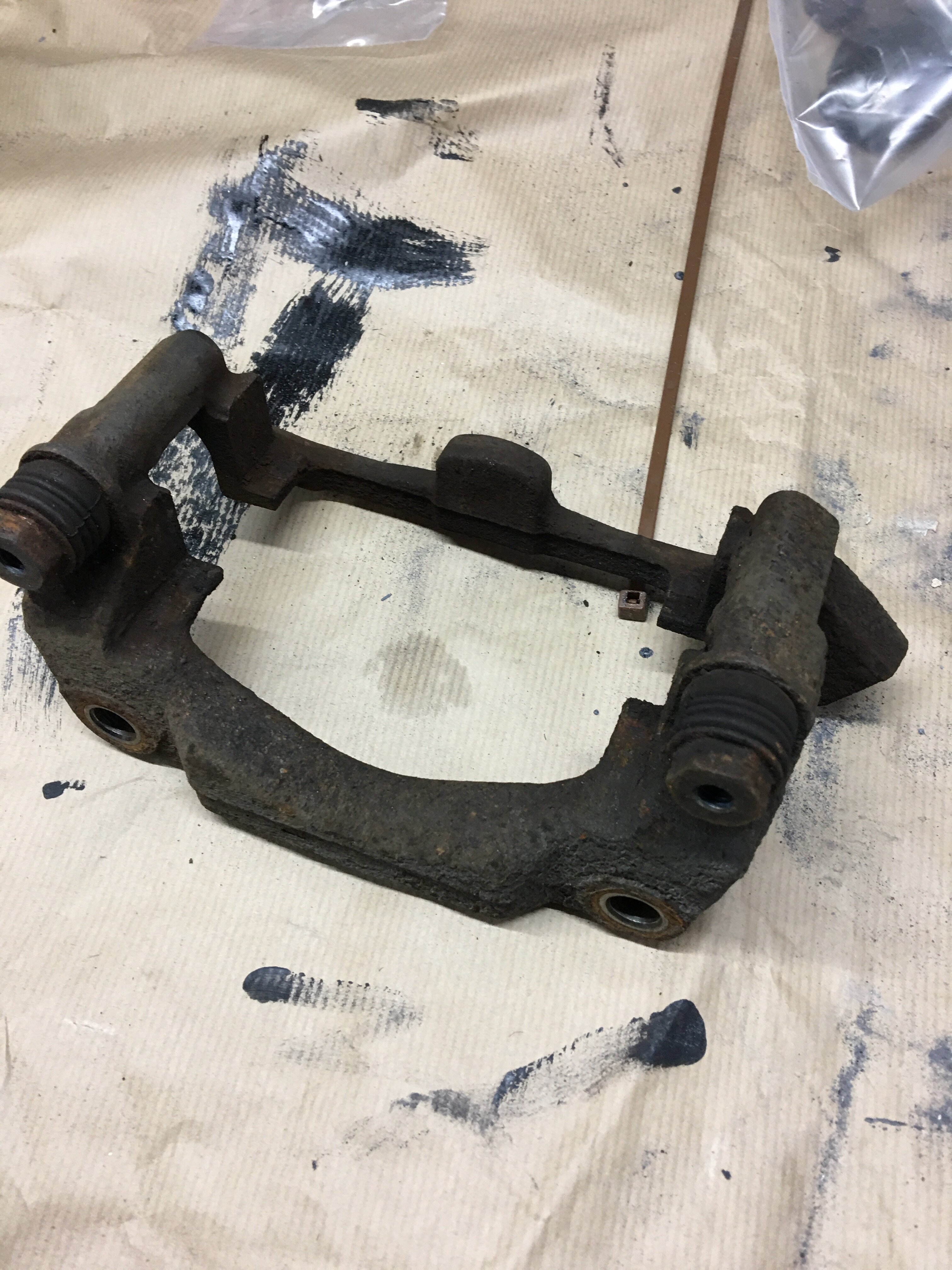 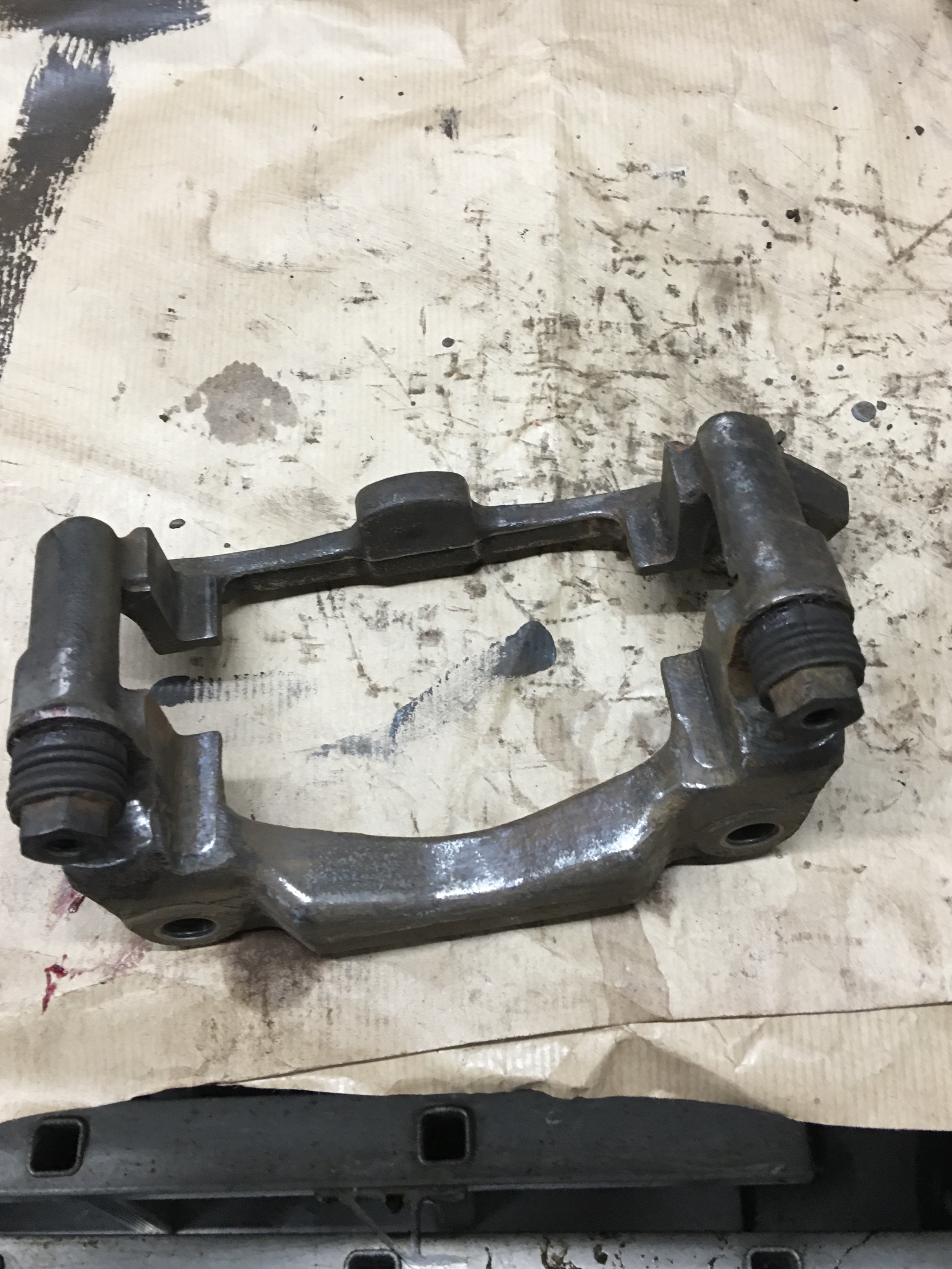 All back together looking a little better than before! 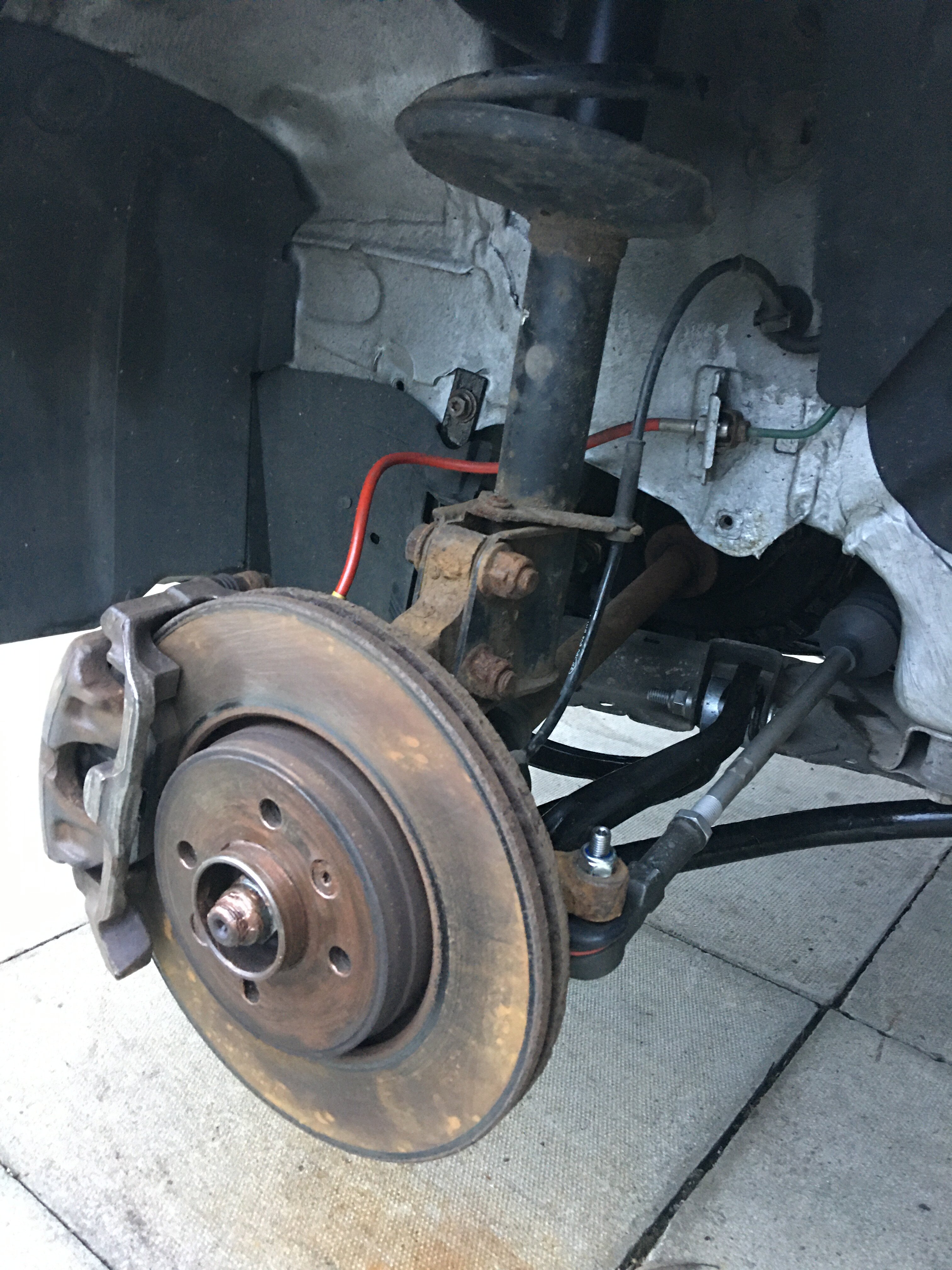 Took it out for a quick drive up the road and its definitely made a difference. Sharper and abit smoother if that makes any sense. Alignment seems ok but il have another look over everything tomorrow and get the alignment checked.

That’s all the bushes replaced for suspension components bar top mounts. Everything polybushed bar the new wishbones. Plenty to do, next up I think I will be stripping and rebuilding the front callipers and give them a lick of paint. Would like it to sit a bit lower so might go for set of grams/eibach springs in the future, that’ll be when the front shocks are replaced with the top mounts too.

ClioSport Club Member
Haha yeah great location for photos there, two guys looking super happy with their old French shitboxes at a Texaco in the middle of nowhere!

Thanks again for letting me hear and see the PMS exhaust, great quality system you've got there and amazing condition car you've got, very clean and tidy standard example!

Seeing those floppy tie rods I think I'll have a look at mine as well. Nice updates again.

ClioSport Club Member
Titanium 182
Well now you put it like that No problem was good to compare systems, don't see too many clios round here.

Definitely worth looking at, not an expensive one if they're knackered either.

ClioSport Club Member
I'll probably get all of it done when getting coilovers. Checked everything over today in preparation for Anglesey on Sunday and looked all fine to be fair.

ClioSport Club Member
Titanium 182
Makes sense, will be like a new one!
You must log in or register to reply here.