ClioSport Club Member
Clio 1.2 Mk2
I'd like to start by saying that I've been a lurker of this forum for a while, my friend is an avid fan of this forum and I have since followed the adventures of this forum. Today I switched to a new car. I was previously running a Peugeot 307 1.4. It was a great car that I enjoyed owning, it was also my first car and I had owned it for around two years. Over the second year, I started to develop some mechanical and bearing issues. The car itself was in great nick but the issues have left my very confused and worried. So I thought instead of putting more money into this seemingly unending pit of no fixes, I bought a new car. Specifically I bought the Clio that once belonged to a user on this forum called M90SR.

This is the first Renault that I have ever bought but I have had experience with french cars due to my history with my peugeot. So in true cliosport spirit, I have created a build thread for the car as I transform it maybe, or just give it a few touches to make it mine. If you want to see what the car has been through up to this point then you should check out his thread on this very same car, its an interesting read, here is the link - http://www.cliosport.net/threads/my-cherry-red-1-2-mk2-ph2-clio-first-car.740304/

There's not a lot more to say really, I'll be running this car for the next year while I save some money to buy the perfect Clio RS 182 that I want.
I'll try and add some photos later tomorrow if I can. It has some niggles that need sorting out so I'll be around the old owners house who also happens to be one of my best friends to work rapidly through the little niggles.

Thanks for reading, stay tuned, it might be a slow thread but I'll try to keep it entertaining.

Also side note, it REALLY needs a clean and detail, that's when the car really pops and looks great!
S

ClioSport Club Member
Clio 1.2 Mk2
Okay, so a bit of an update on the Clio, I washed it yesterday. But... of course, me who has never had a car build thread forgot to take photos of the before and after. So today I grabbed my buddy, and we took both our cars down to the local park and got some snaps off it. Apparently the car got pretty dusty again from yesterday to today. But that didn't stop me getting my shots in. Just to be clear, the cherry red Clio is mine and the black 182 belongs to my friend.

A few things about my car is that it has Clio RS front seats in it, no rear seats and a boot build in the back. The wheels are from a 172 I believe, those have been finished in a BMW black that looks gorgeous when it's just been washed.

But yeah photos, I'm sorry there's so many Enjoy! :smiley: 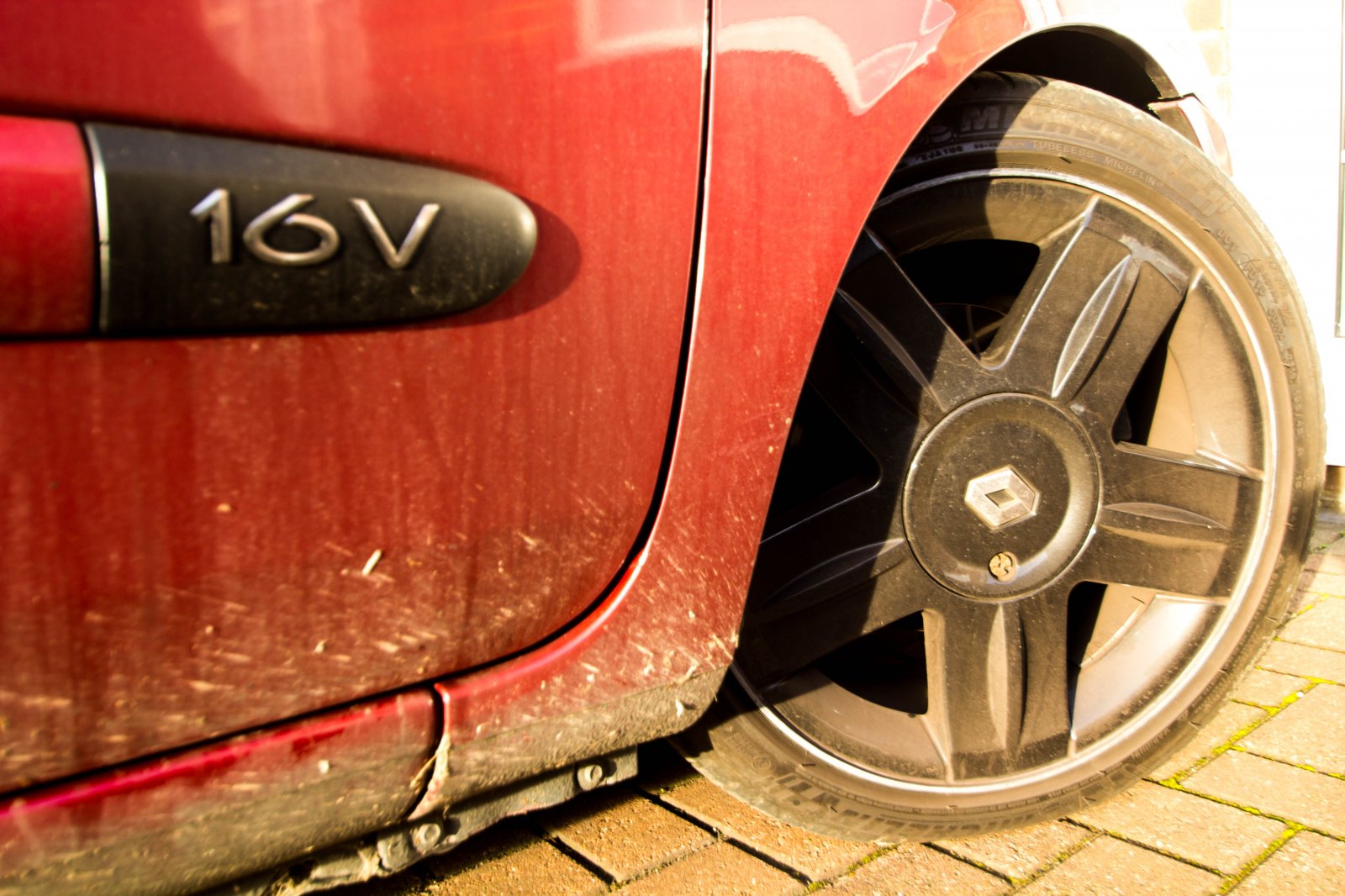 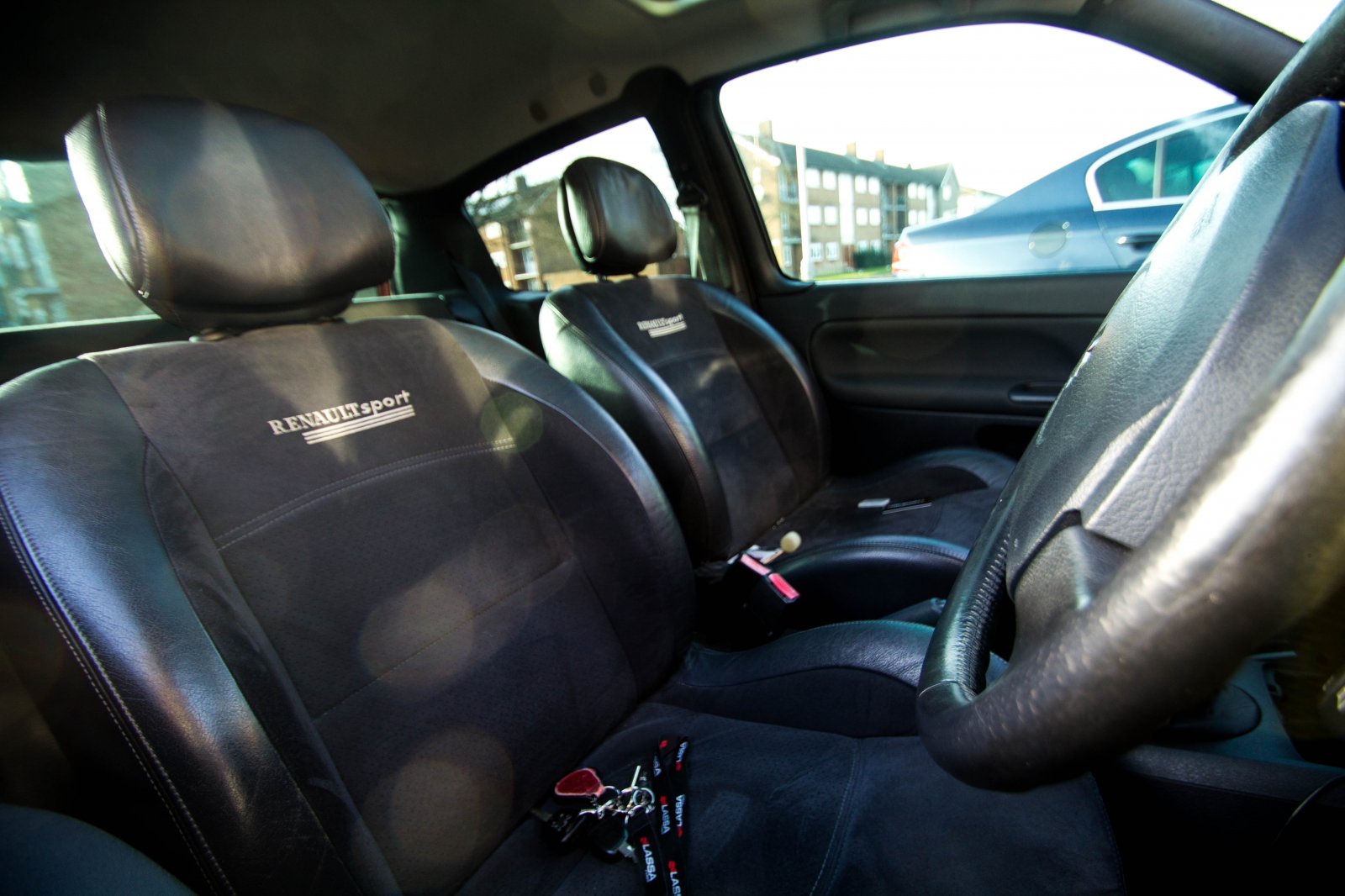 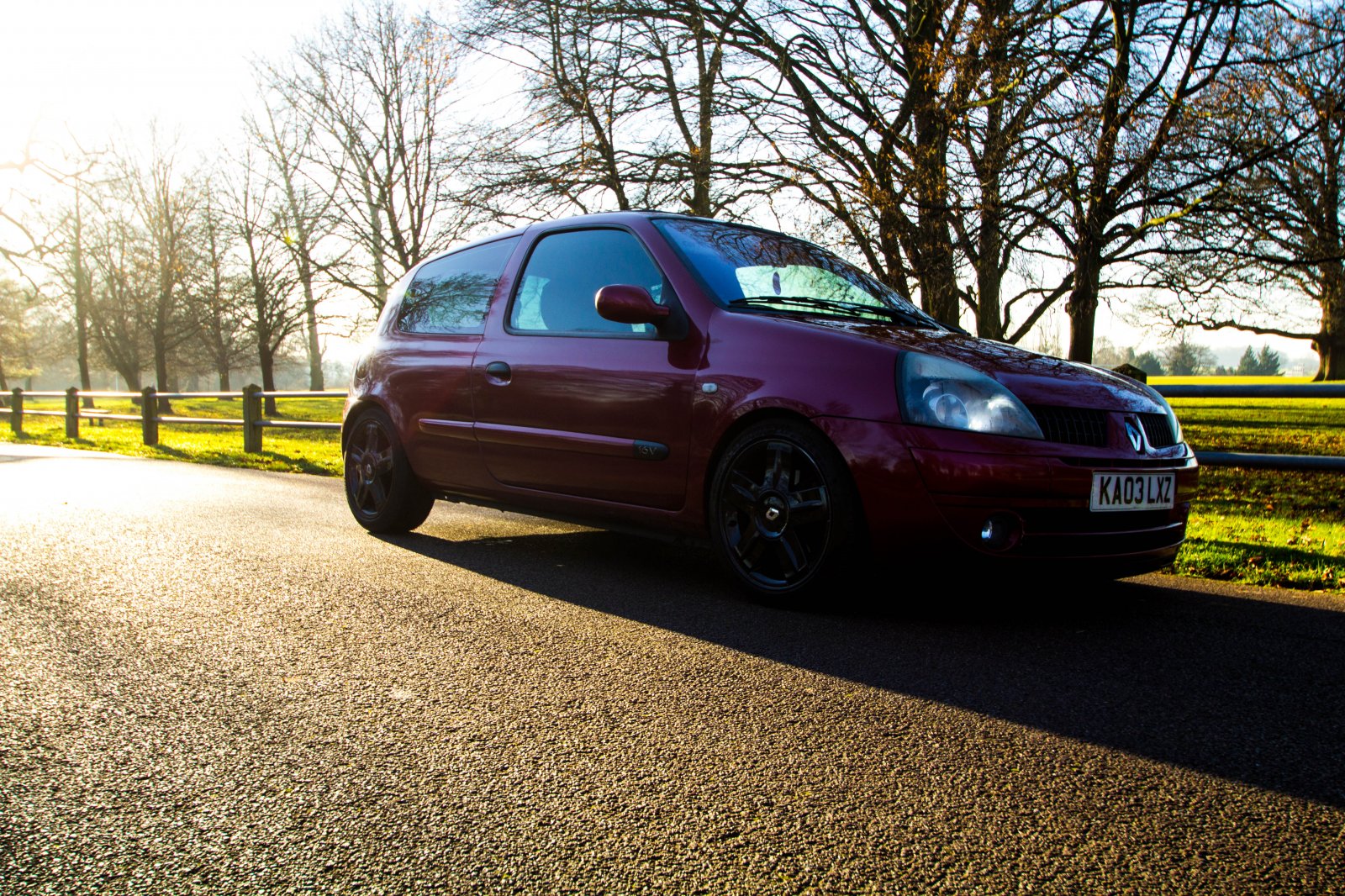 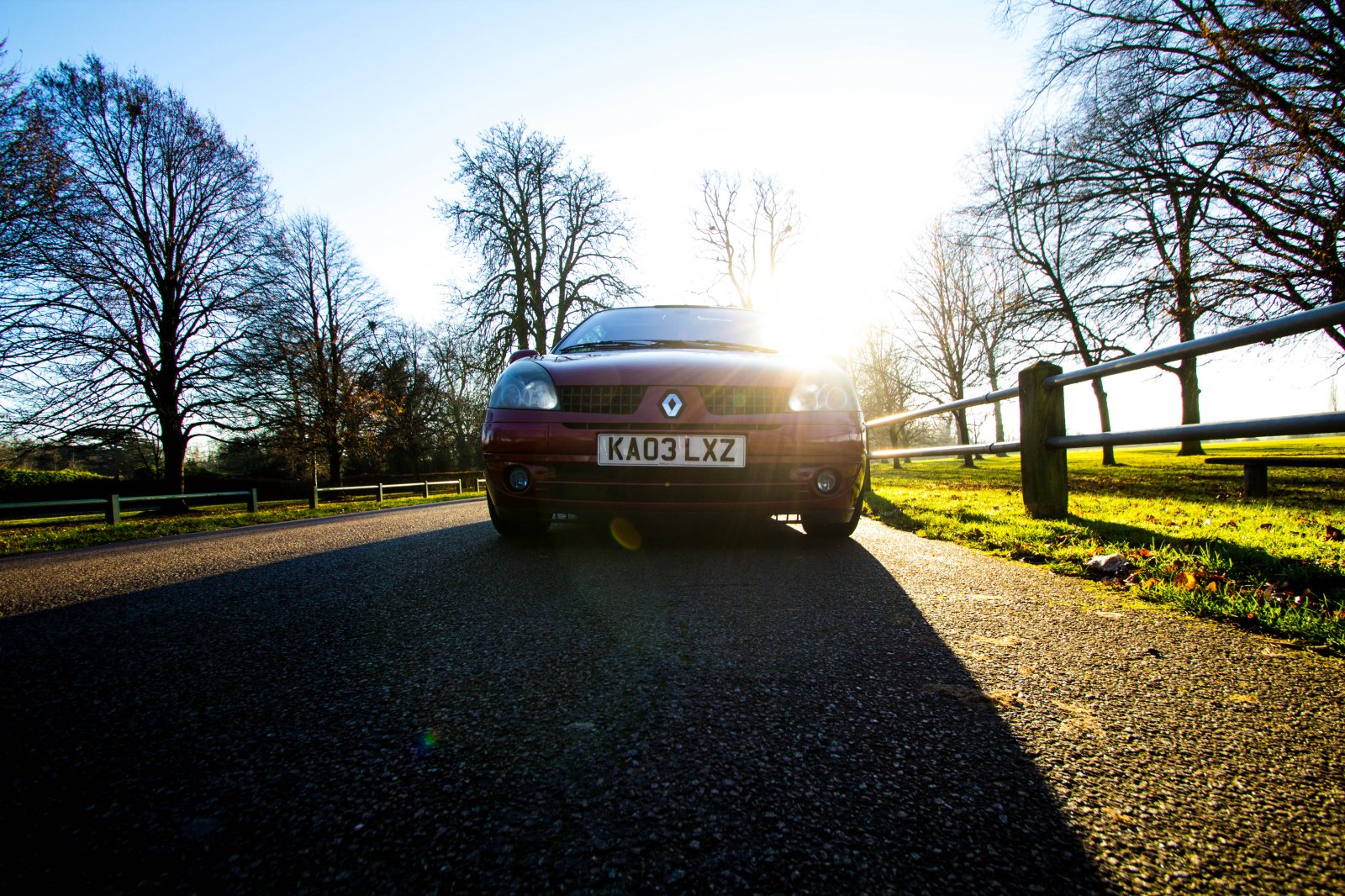 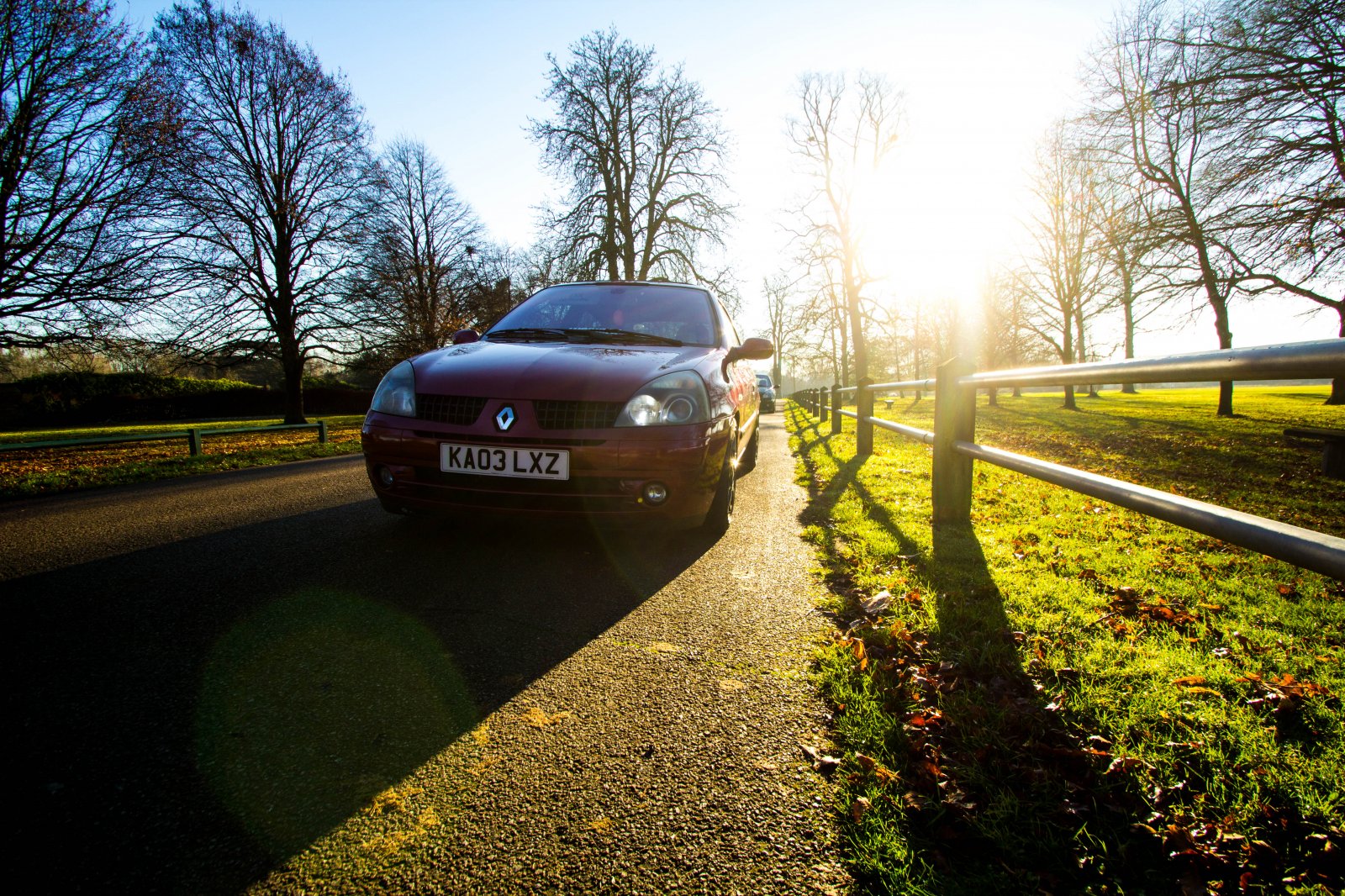 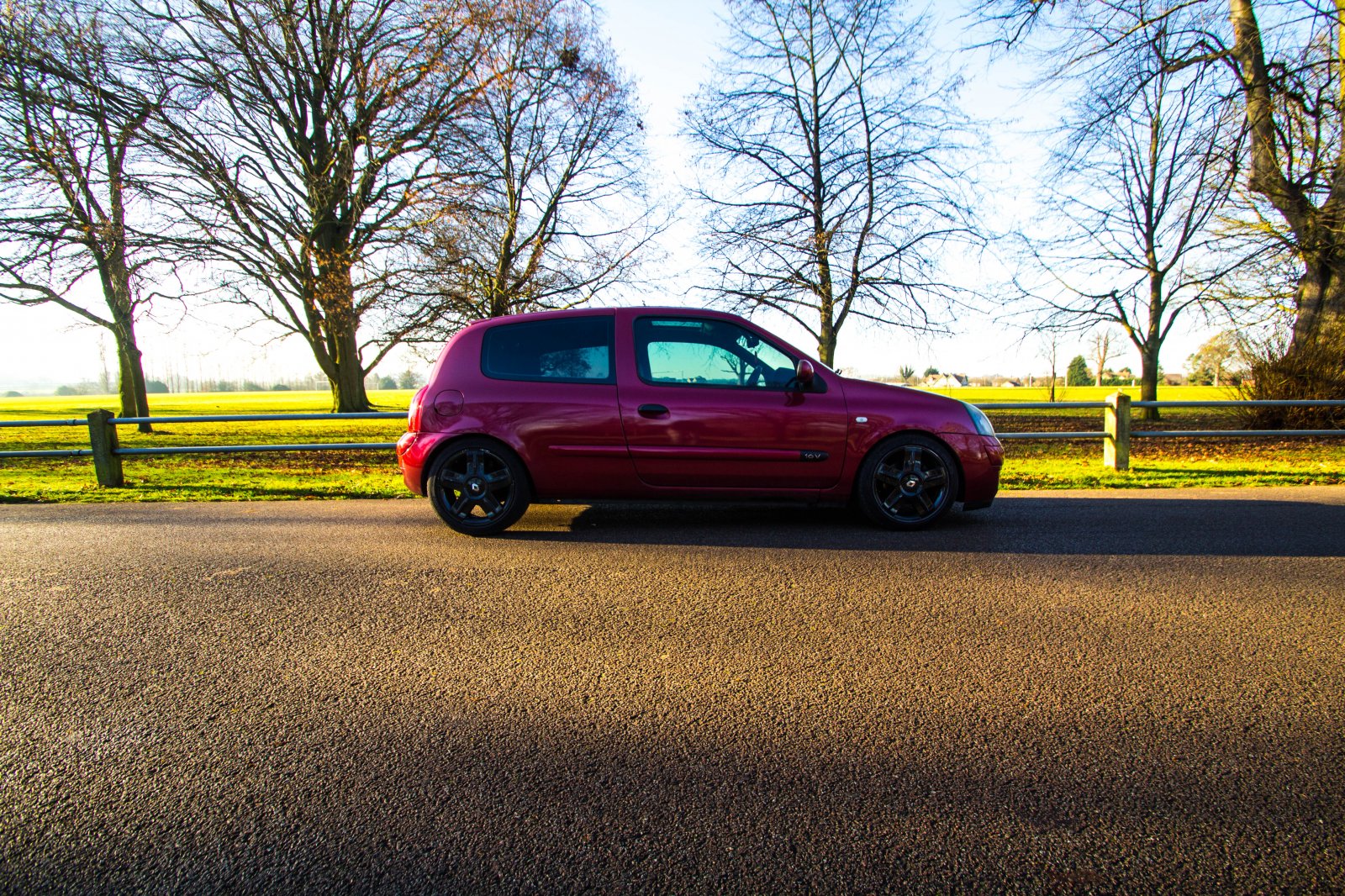 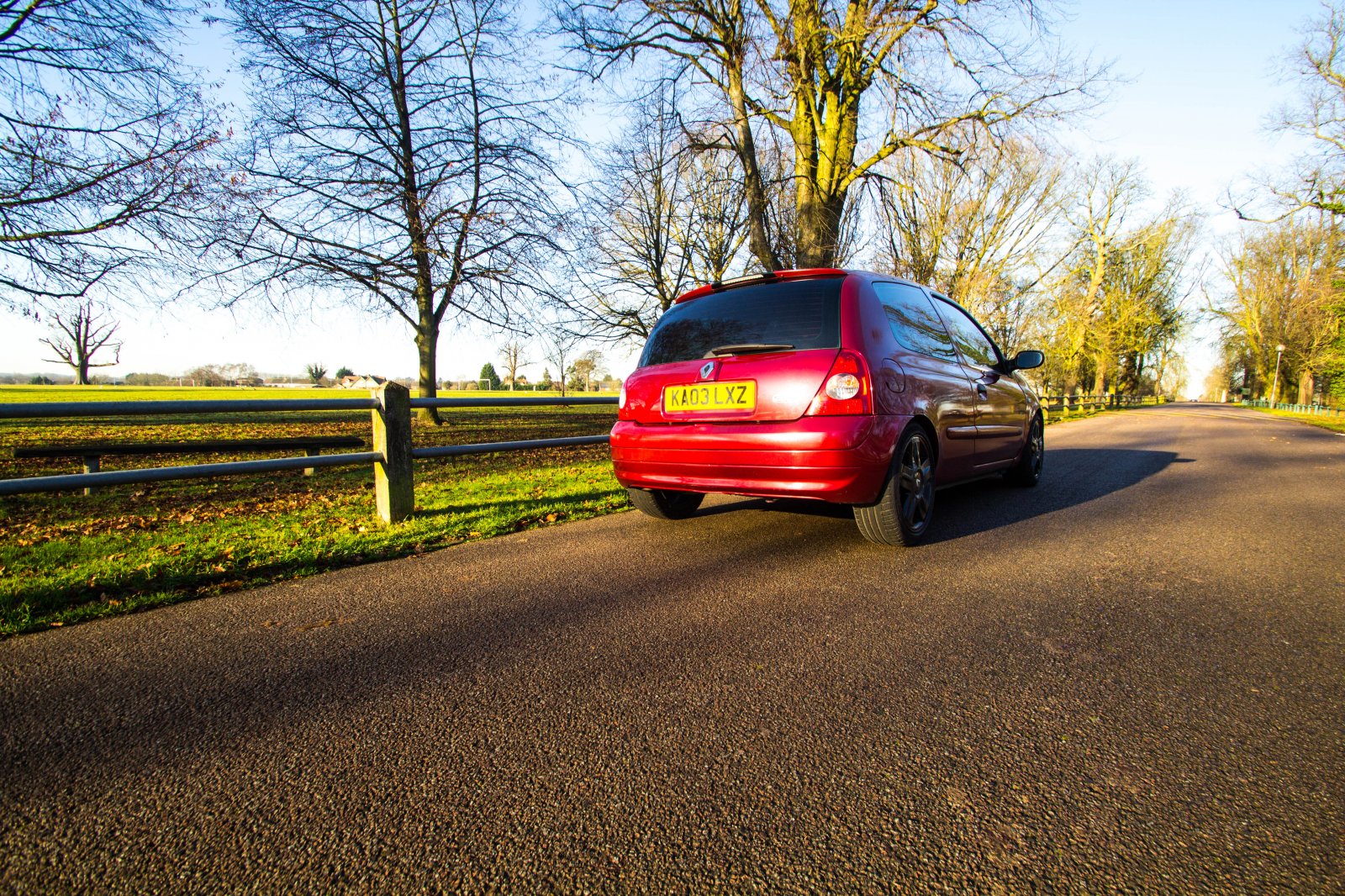 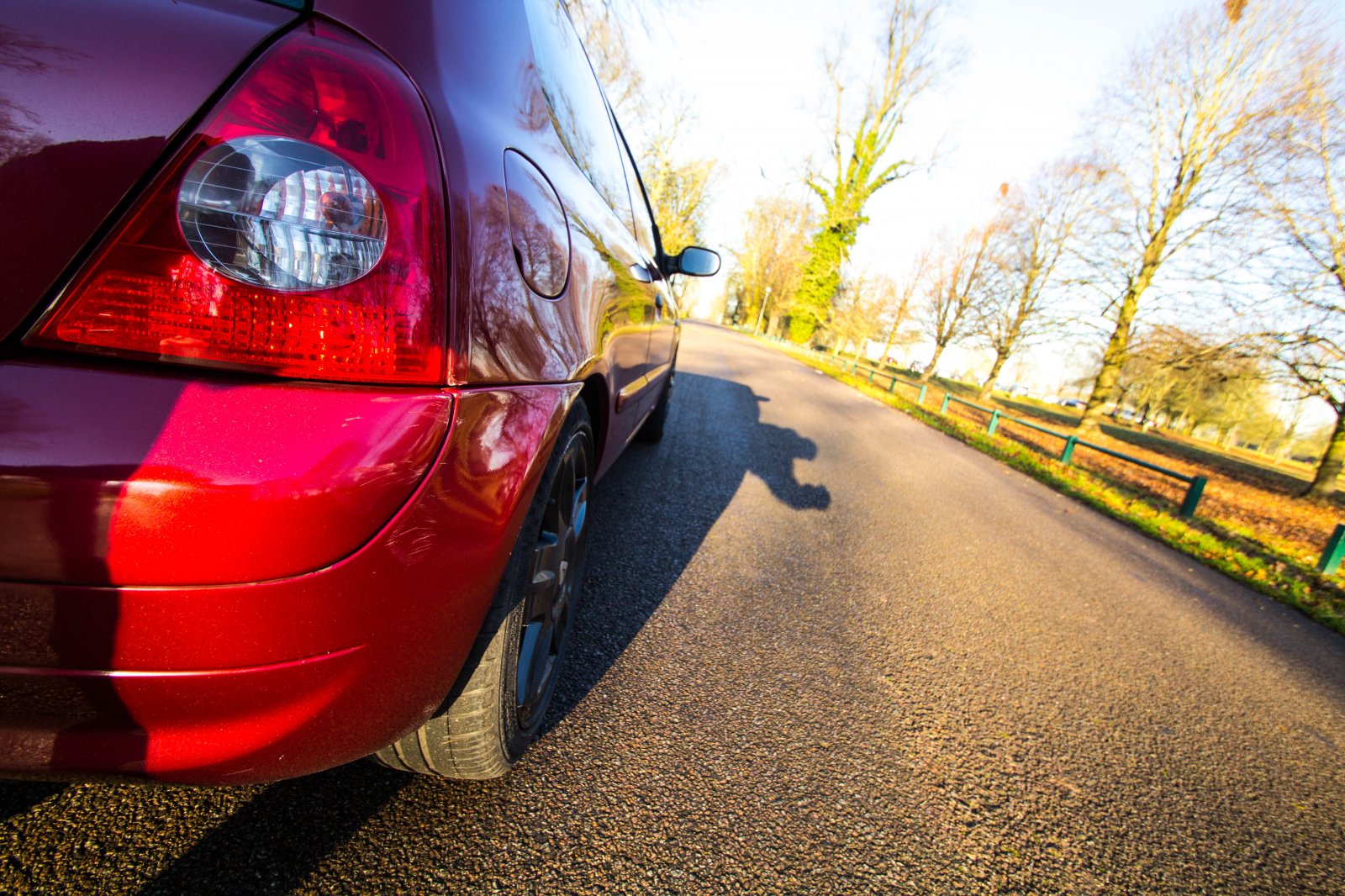 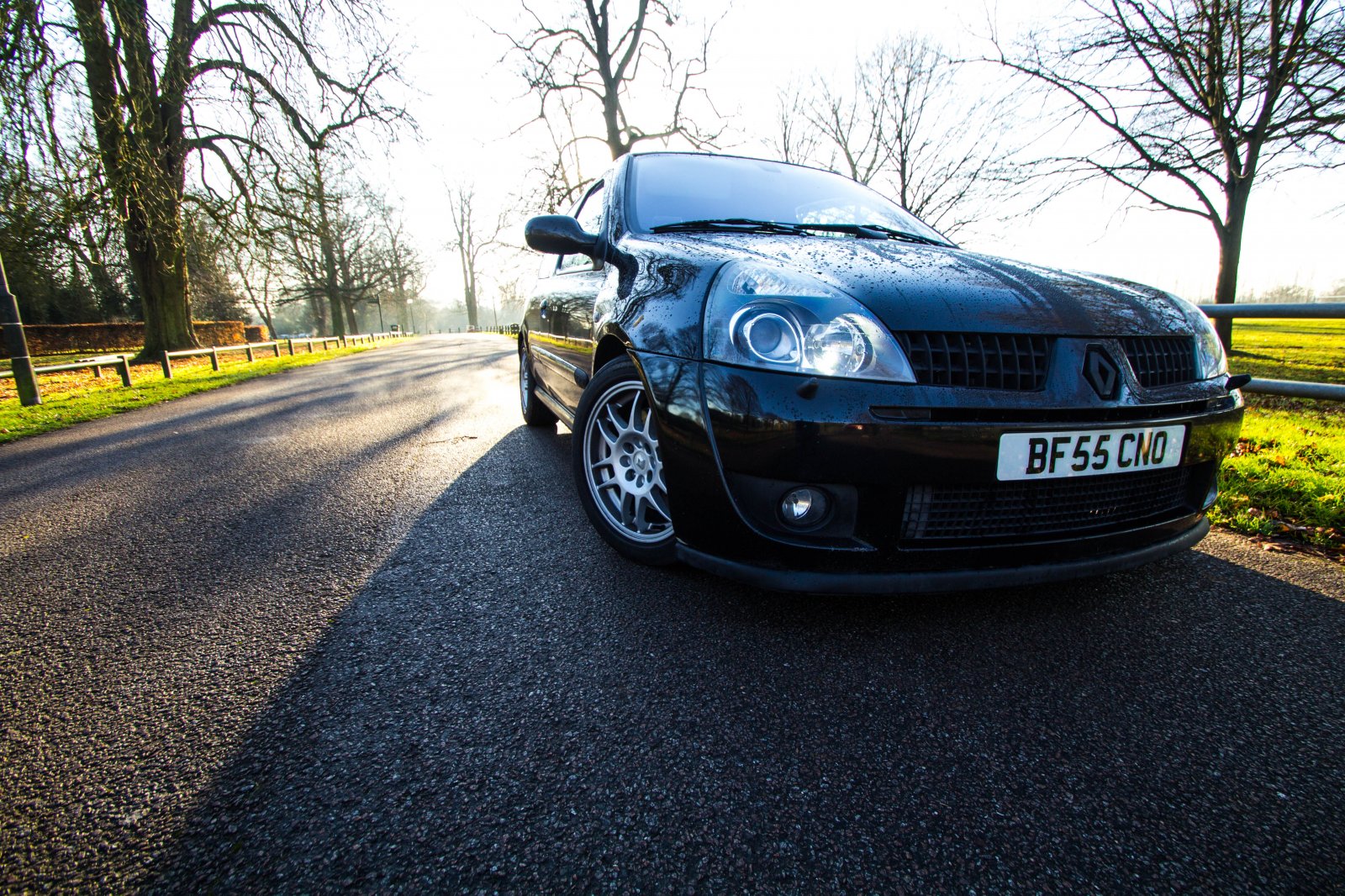 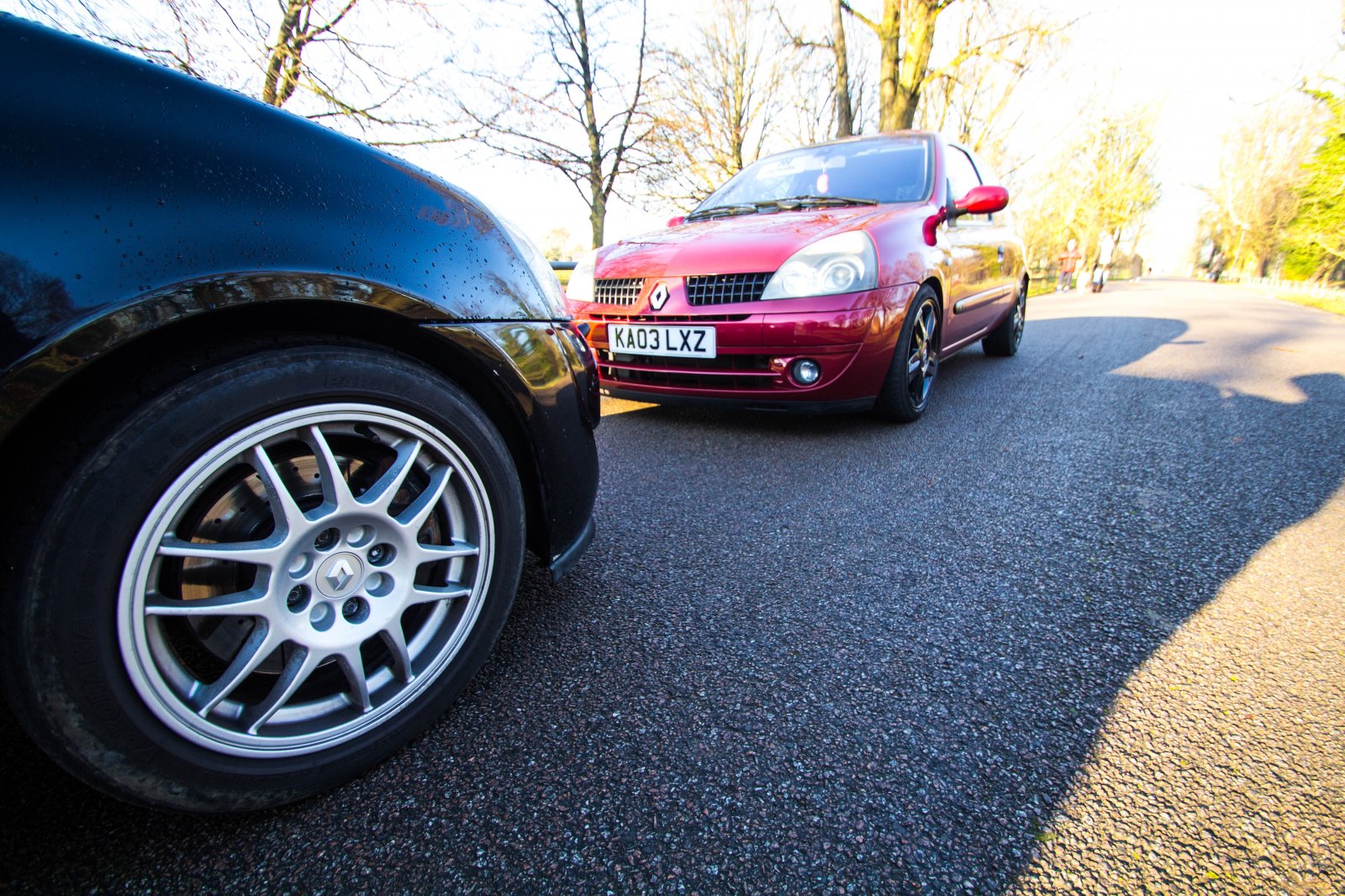 ClioSport Club Member
Clio 1.2 Mk2
Okay so I did some quick things to the car, so far i'm absolutely loving it. It's weird that it's a smaller car than my previous one and it's only a 1.2, but it's super nippy and nimble, it's a great fun car.

So I pulled the trim pieces off from the interiors and decided to wrap them. I grabbed some gloss black I had sitting around and wrapped the pieces, which turned out looking very tidy. 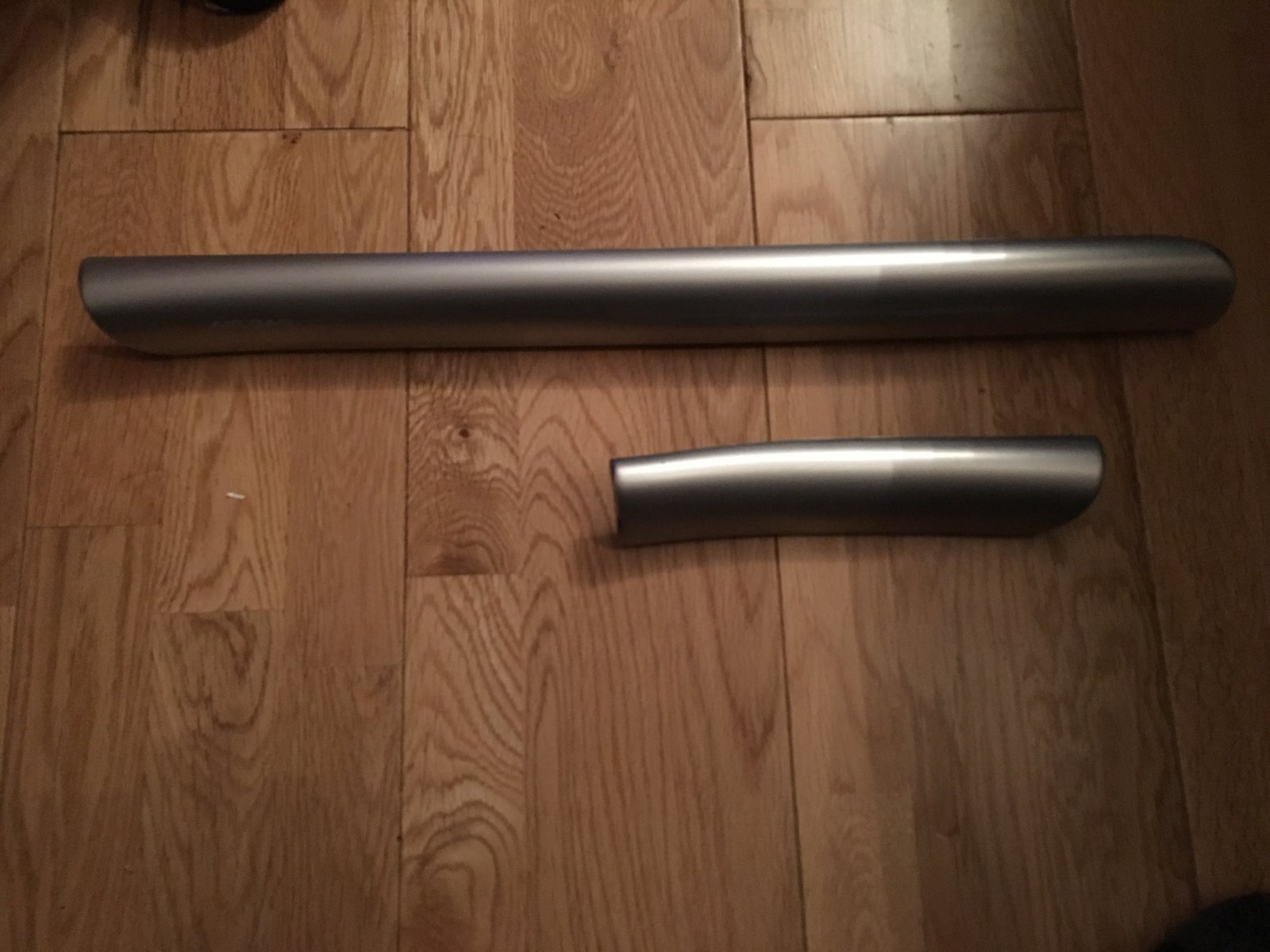 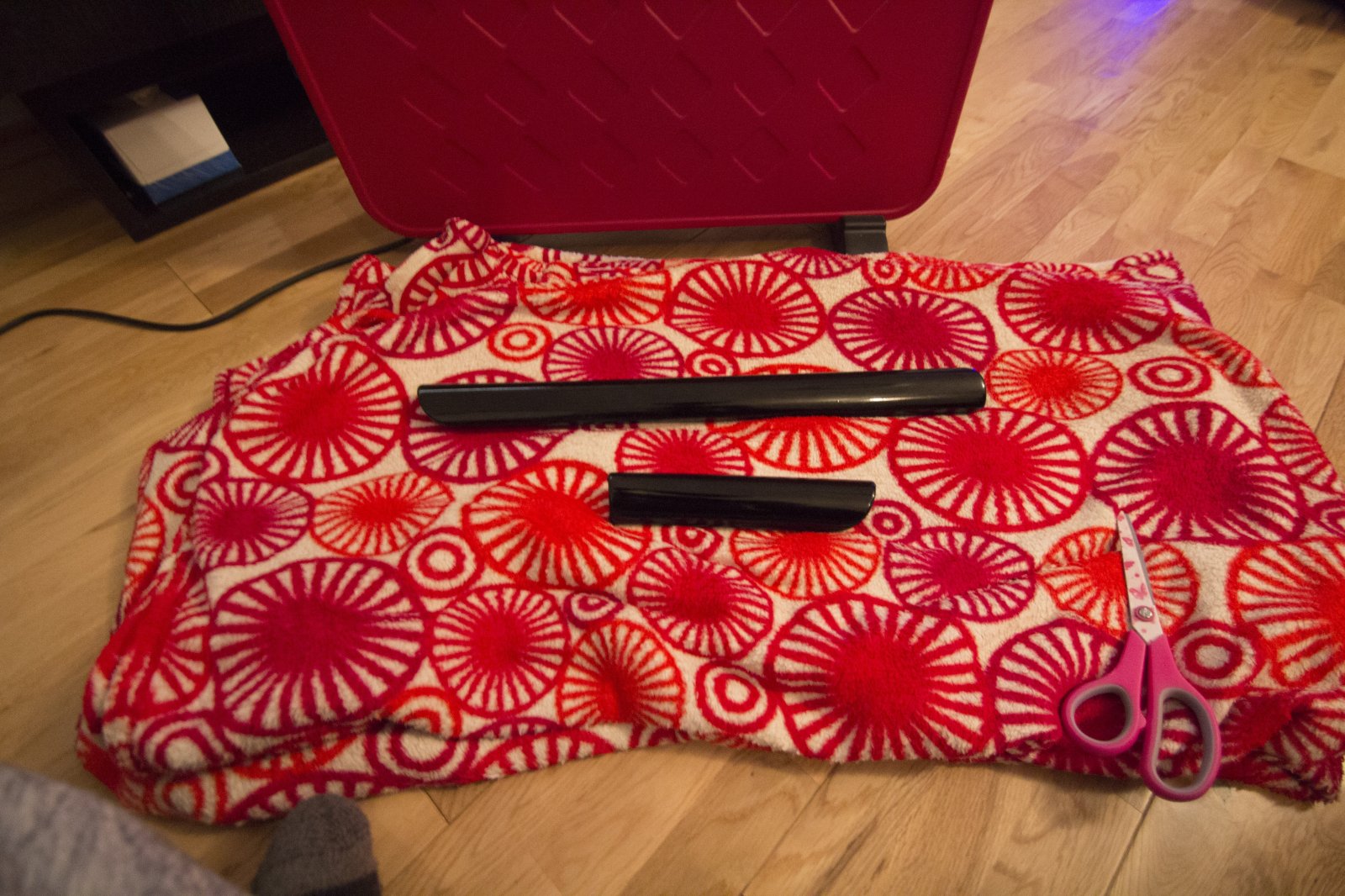 Put them back in the car and it's looking real good now, matches nicely with the rest of the car. 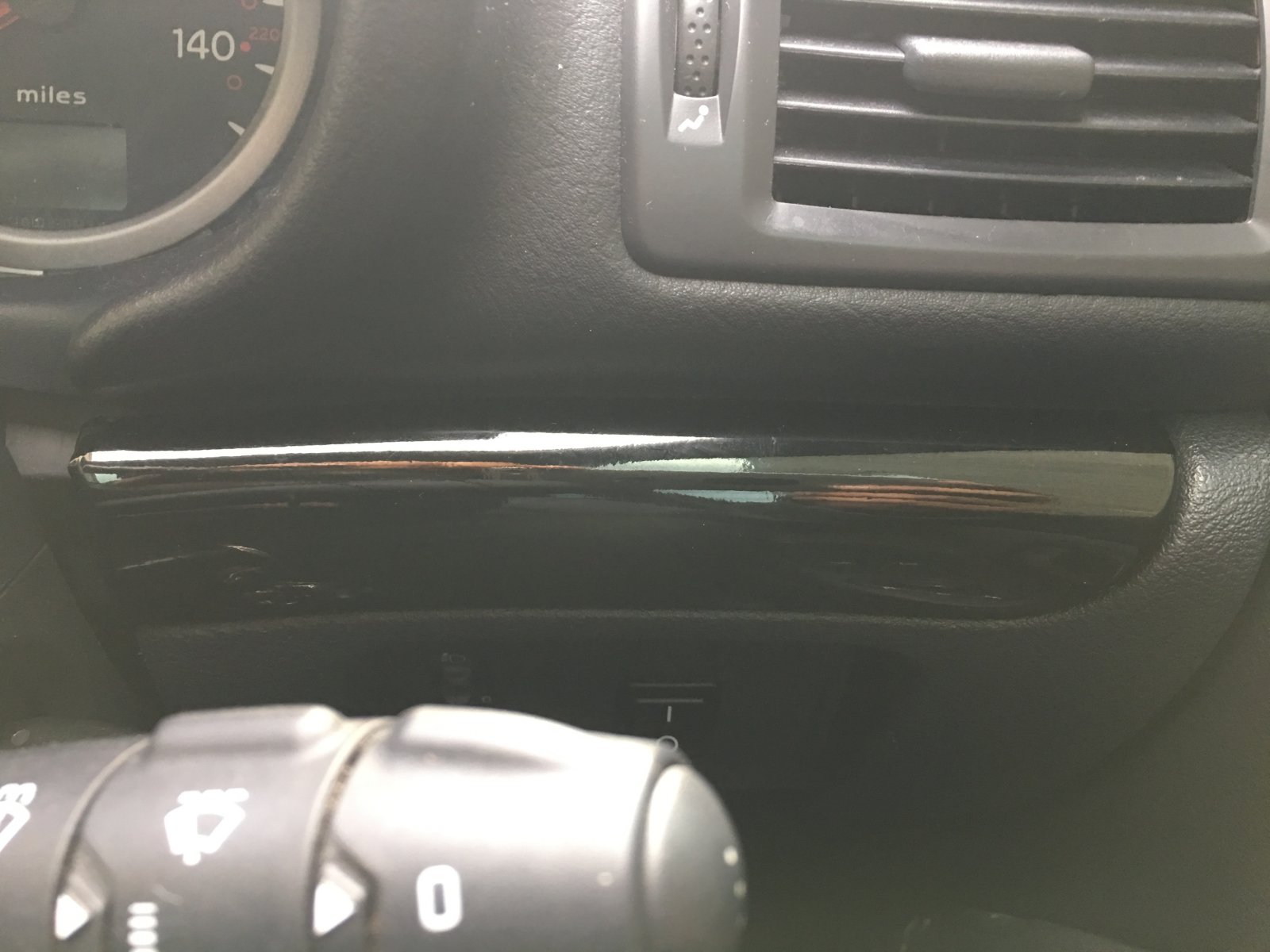 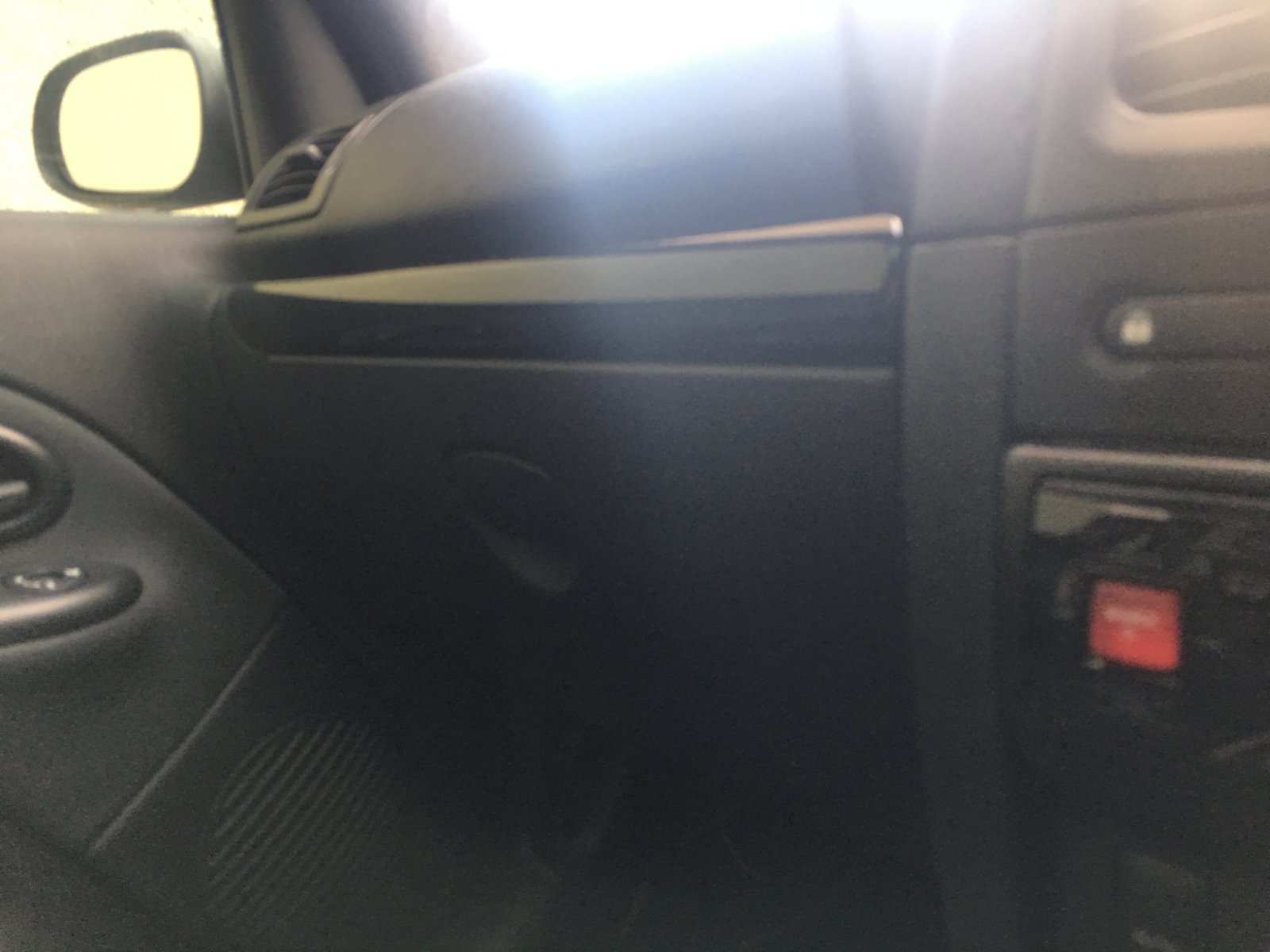 I stuck on a WORKKED sticker for good measure! 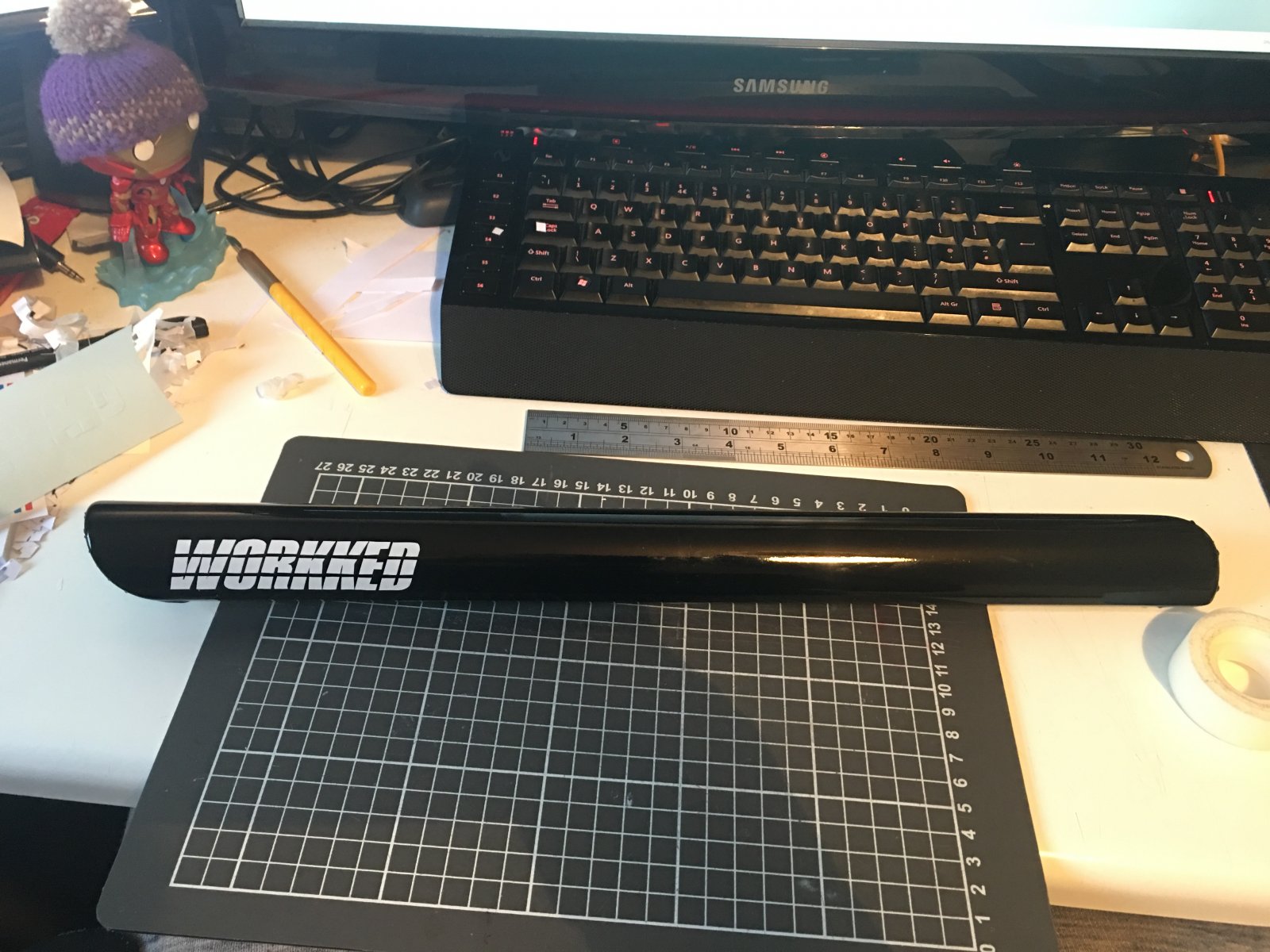 The next thing I wanted to address was the boot build, it was done to a great standard of quality but there were somethings that I wanted to change or improve on. The main thing was that the panels needed hinges, so I went through the process of adding hinges to the rear panel directly behind the seats so that it gave me a hatch that I could open and store smaller things in without it fly around the car. It also kept the other panels more secure on the frame too as there was one less free panel. So here is some photos of the process I went through. 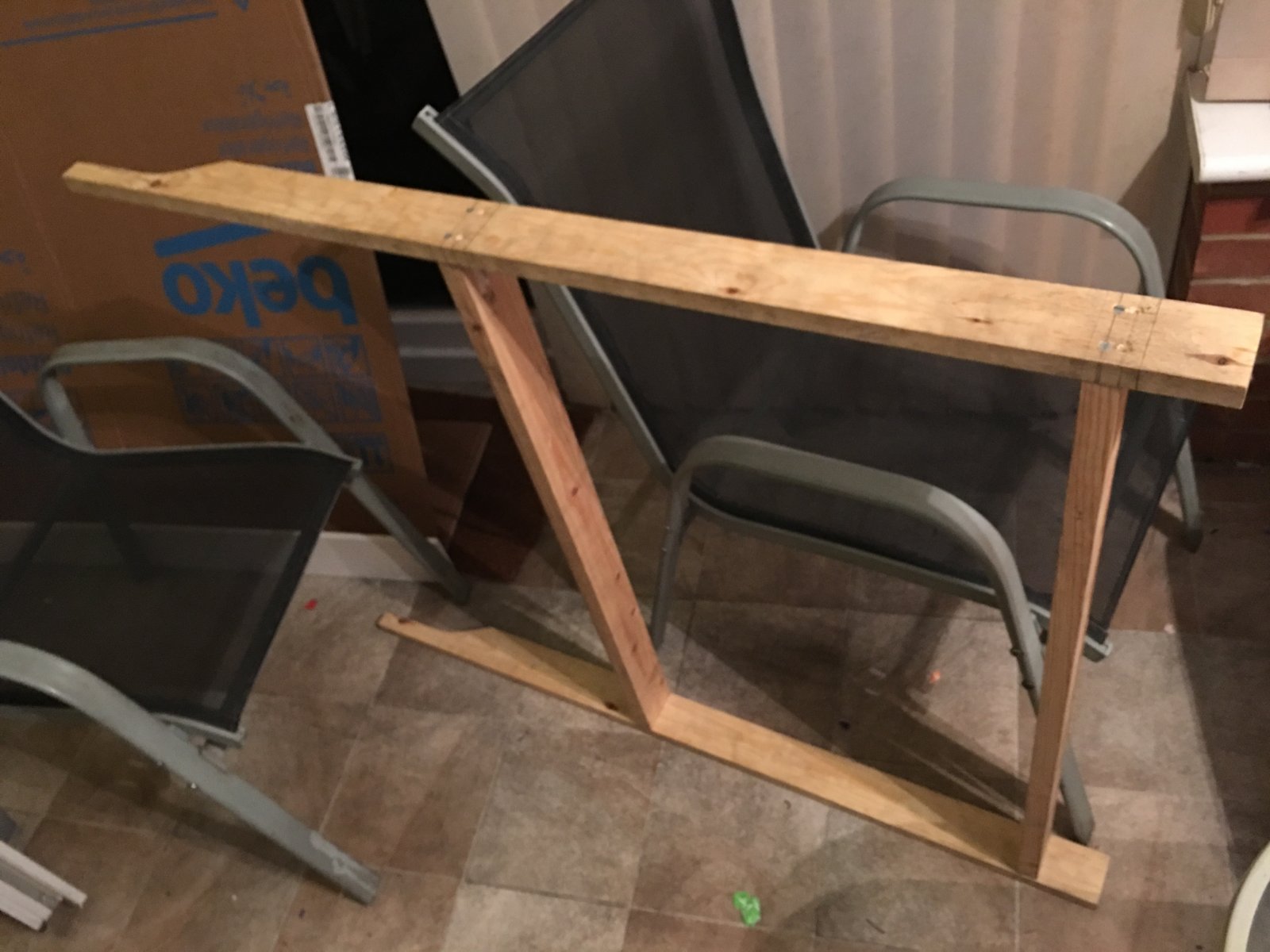 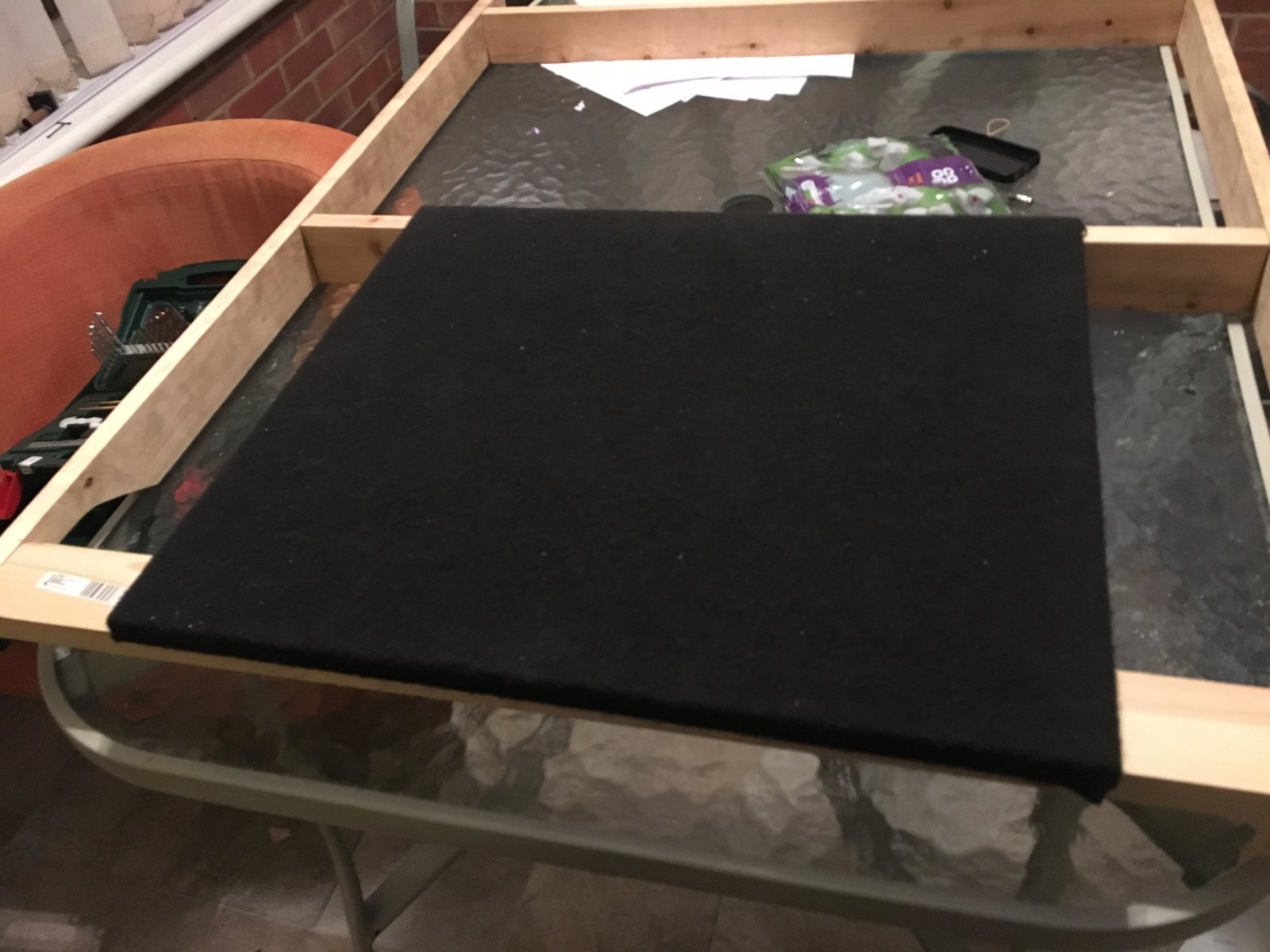 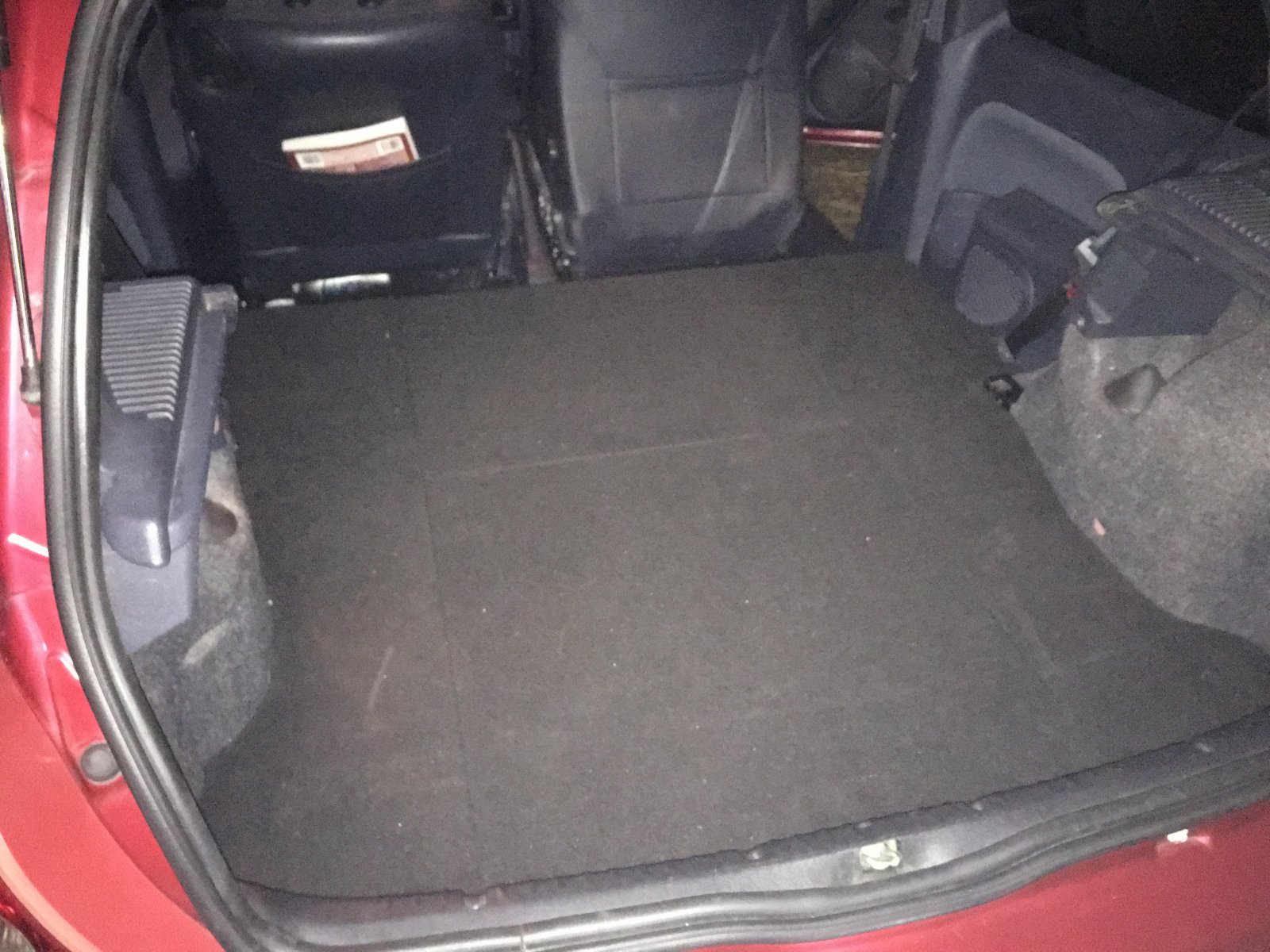 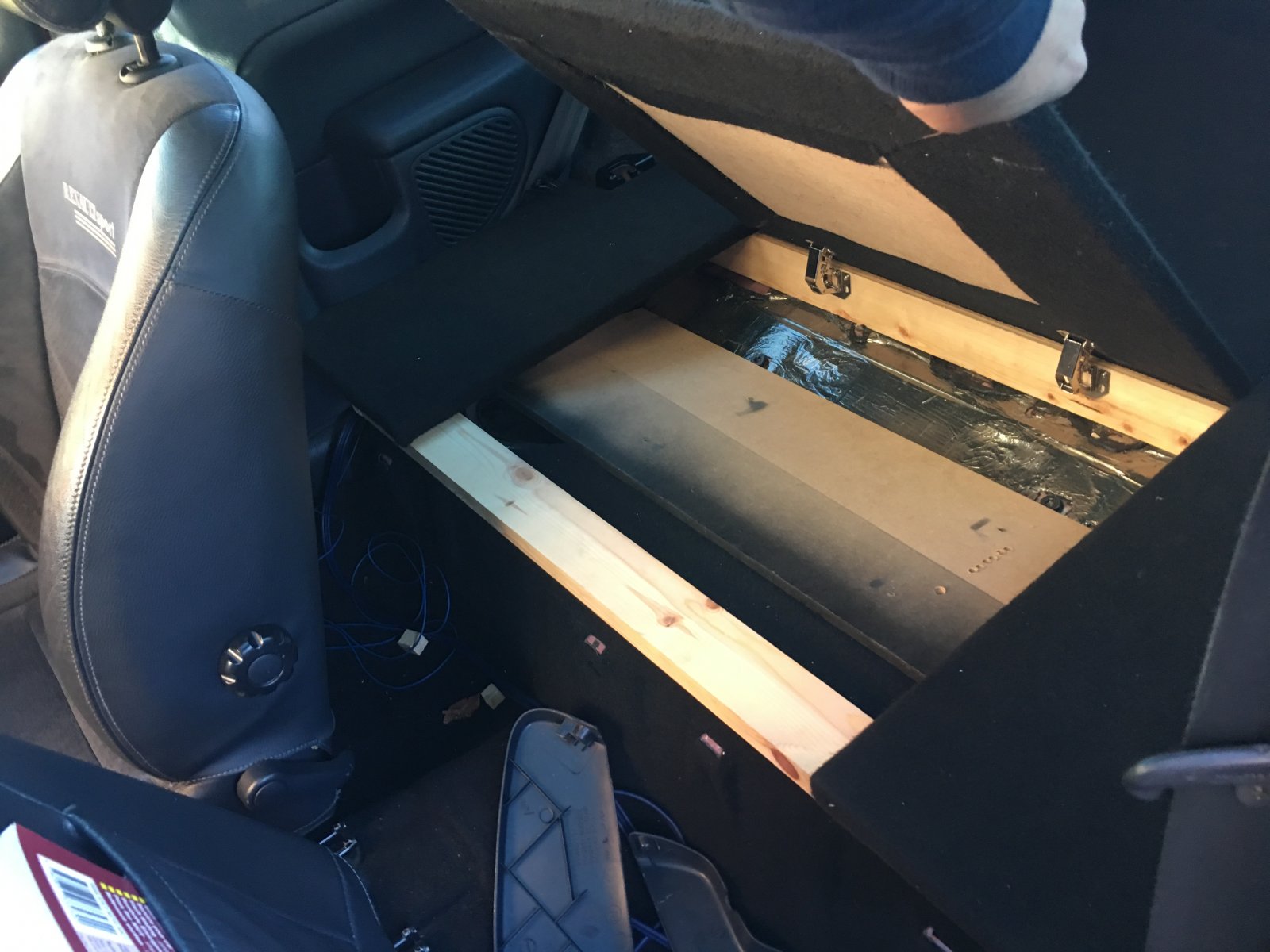 It's much nicer now but it needs some gas struts to hold it up, that's my next step when I get the time. Ideally, I need to get an amp in the car so that my car audio moves away from tragic.

On a different topic, when I go out, I go out of my way to park away from everyone else in the car park, so it was just my luck that even when I do that, someone still parks next to me. And then proceeds to mash their door into my car, I.WAS.HOPPING. 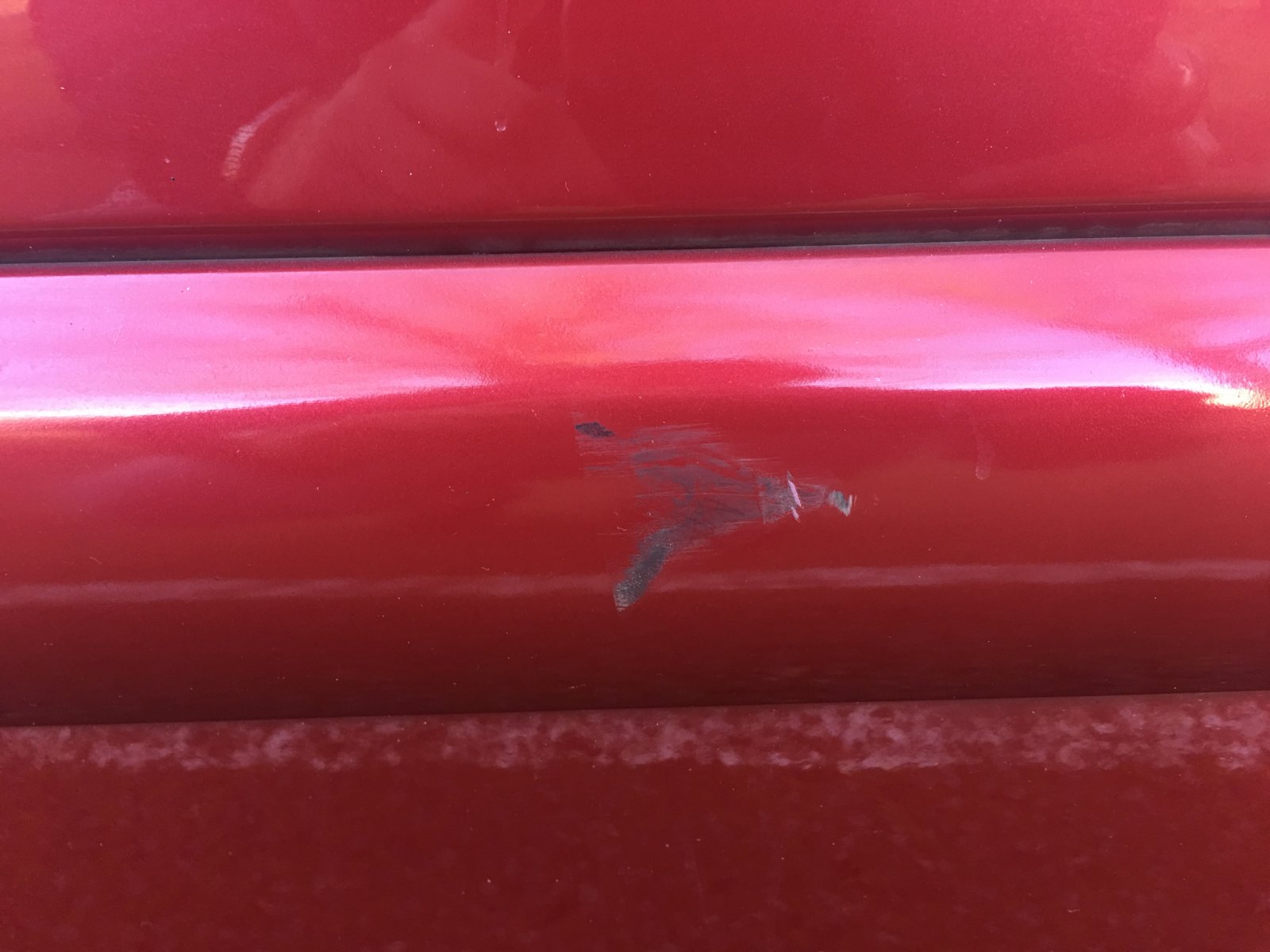 The black marks came off with a clean but there is damage there which I hope will buff out. This may look like the worst of it but it's the bit that I can easily spend some time buffing out. The part buff out is the dent I then found above this where obviously the rest of the persons door had hit. So yet again it fascinates me that people have this little respect for other peoples cars. I just struggle to fathom how some people can be so careless. It really makes me loss faith in this world sometimes, it's frustrating as hell. While i'm ranting, it's amazing how many bad drivers there are in just Canterbury, let alone everywhere else.

ClioSport Club Member
Clio 1.2 Mk2
Okay okay okay, so I didn't plan on this, it kind of just happened...

I got RS door cards for the front and rears, and they bring the car together on the inside! 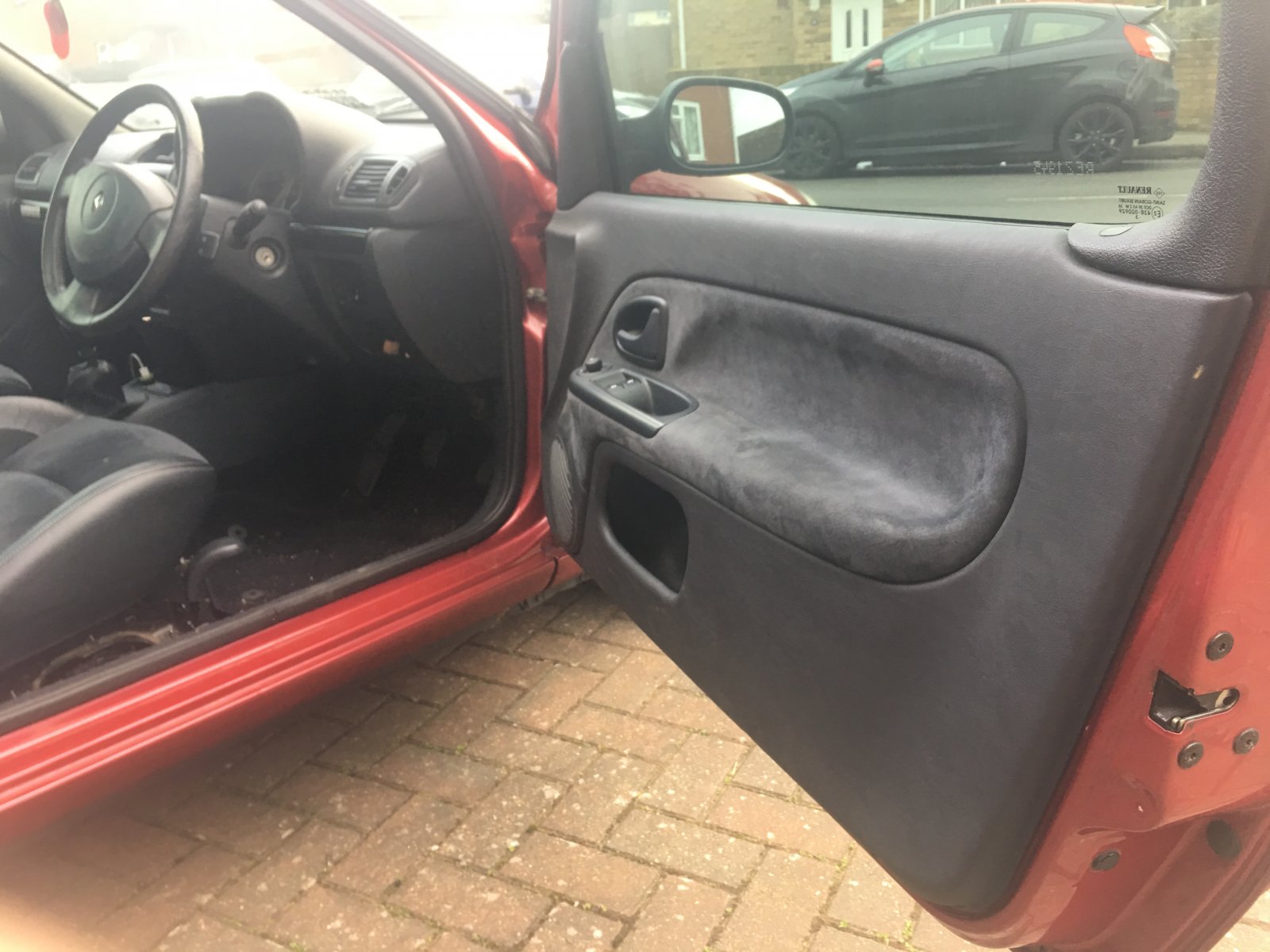 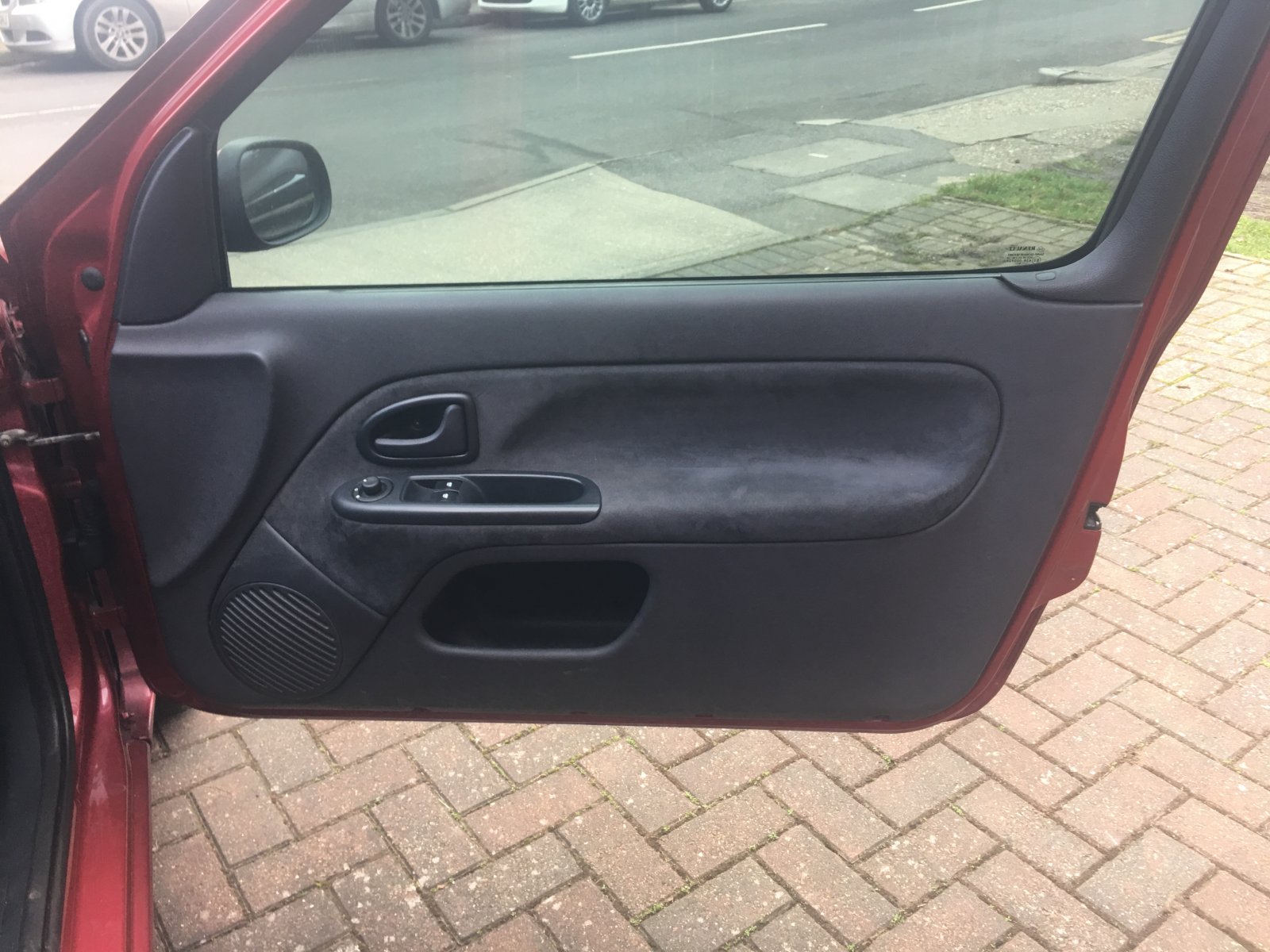 Picked them up last week and got them installed the following weekend. I was so busy with other things that I forgot to update my thread

They look great! Thanks @AdamCup for the cards! All it needs now is for me to find the time to re-trim the 172 steering wheel and install it! But that's for another day.
S

Thanks man, really proud of this little car, it's a fun little thing to own, and unique and clean in it's own little way.

French tangerine
Nice little starter Clio. It peevs me greatly like you say, you park your car miles from anyone and some dopey brainless r****d parks 3 inches from your door.

jamesycc said:
Nice little starter Clio. It peevs me greatly like you say, you park your car miles from anyone and some dopey brainless r****d parks 3 inches from your door.

Oh that's one of the worst ones, where they have parked so close you have to get in from the wrong side of the car! And I hear you man I'd be worried too, it's a shame because every time I walk up to the car my eyes go straight to the dent on the door.

Good luck with selling your car, are you gonna be getting another RS or moving on to something else?

I'm super excited to get one myself! Just having this 1.2 brings me joy, I can only imagine how much more fun it'll be to have the 182. Definitely one of the best hot hatches, especially for how much they cost to buy.

French tangerine
Staying with the RS brand. Got the bug now. Looking at this on sunday 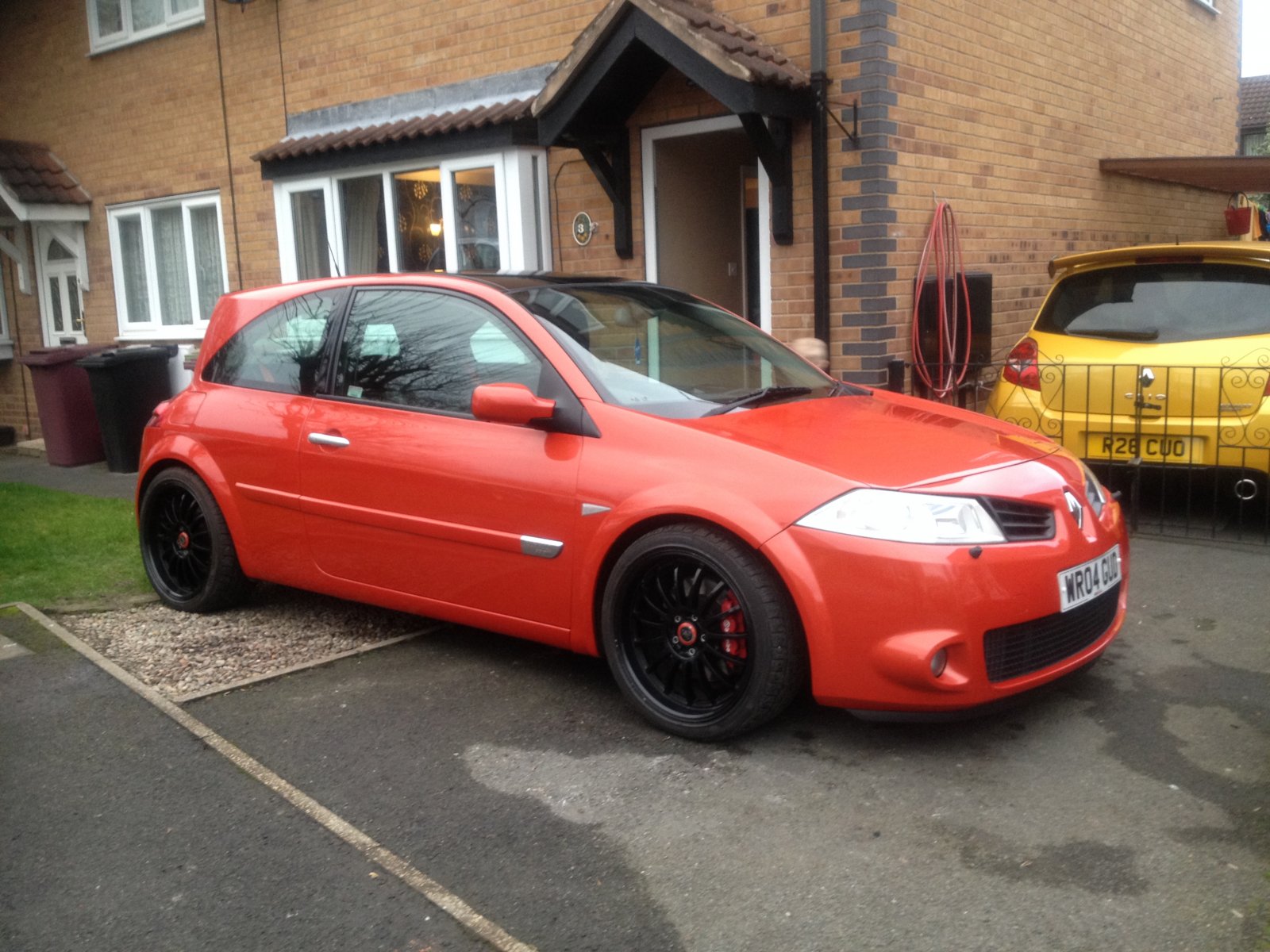 ClioSport Club Member
Clio 1.2 Mk2
Oh nice, that looks clean! Hope it turns out well! I don't know my Meganes too well, is that a 225? Think that's what they're called?

Well at least we'll still see you around the forums then, I see a LY in the background too :hearteyes:

Shado said:
Oh nice, that looks clean! Hope it turns out well! I don't know my Meganes too well, is that a 225? Think that's what they're called?

Well at least we'll still see you around the forums then, I see a LY in the background too :hearteyes:
Click to expand...

French tangerine
Yep, sure is
S

Oh wow that's quite a collection!
You must log in or register to reply here.