I bought this clio initially to have a cheap tracktool project i was going to race in the timeattack series here in the lowlands of holland.
it was in quite a sorry state to say the least 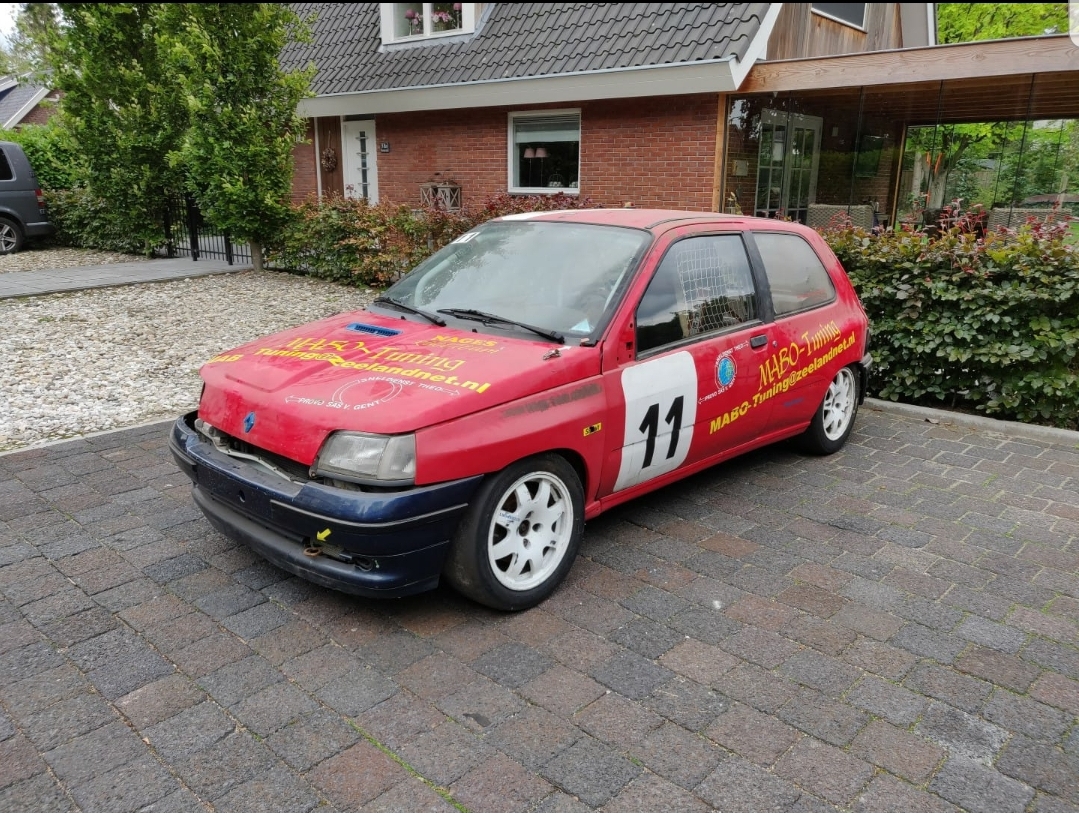 all in all it was a mayor question mark for me. but i did find one thing. J J initials stamped into the alloys.

i began digging and digging and eventually found the old owner called Jo Jamers which is a former Clio Cup champion.

i've been doing alot to it since as getting the alloys renewed and eventually booking a Ring trackday, then Covid hit.
all my plans went out of the window in a couple of seconds.

the my mind switched. i realised how rare these cars had become and i began the restoration of this little gem.

in 1 day i stripped the entire front end back to bare.

and for funsies i also tried to fit a 197 engine into the engine bay. it just about fit in there. 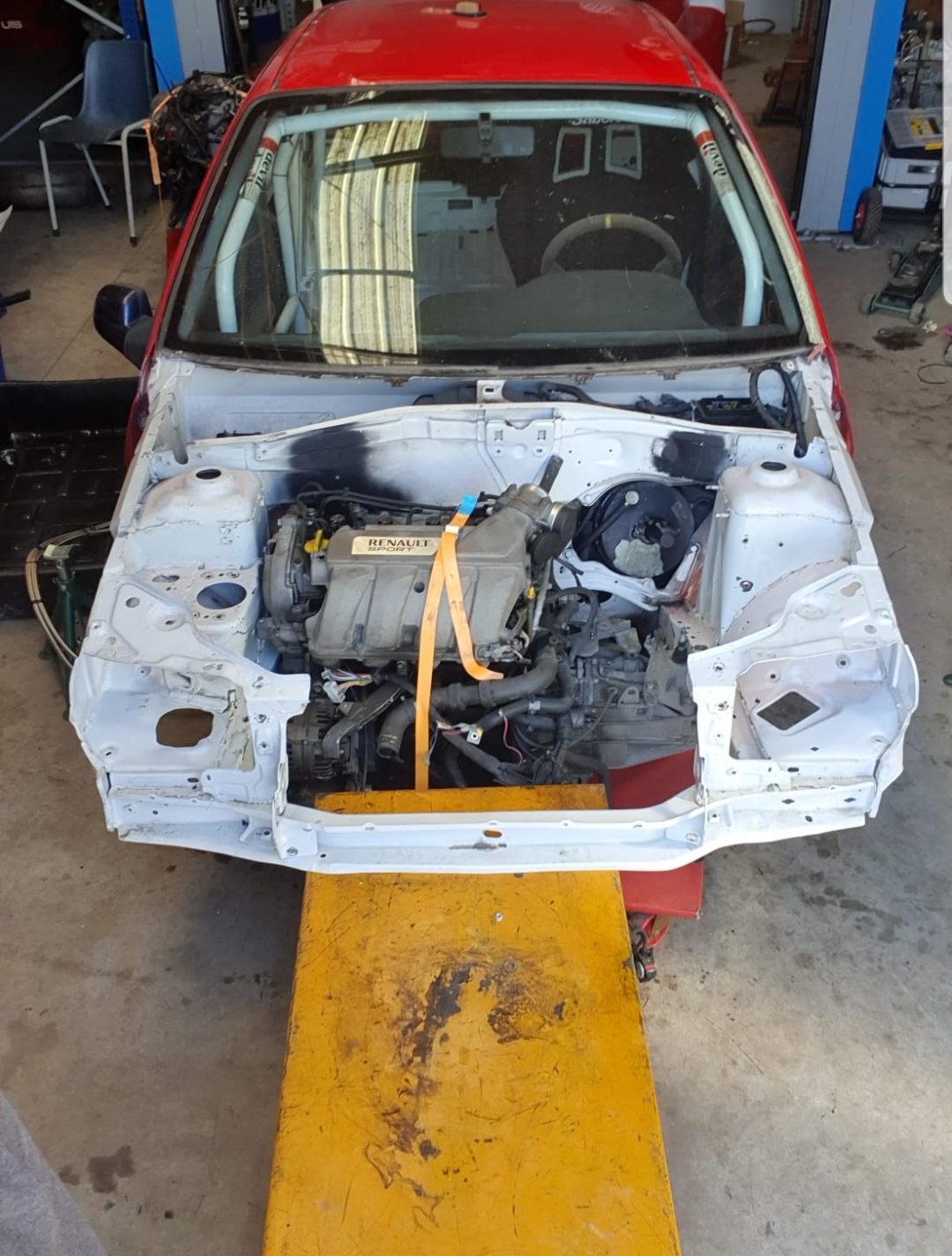 here is where the story begins for this car

ClioSport Club Member
Clio 172 BMW 130i
This will be interesting, greetings from the Netherlands.

after the engine had been stripped from the car more things started to get tackled.

i cleaned up the front and rear brakes and refurbished them with new pistons, seals and dust seals. painted them with heatproof paint to make them last.
later i ordered new wheel bearings for the front and got on with refurbing those aswell as 25 year old bearings are a no no

later that day the new discs and wheels came back from the powdercoaters and i couldnt resist to test fit them: 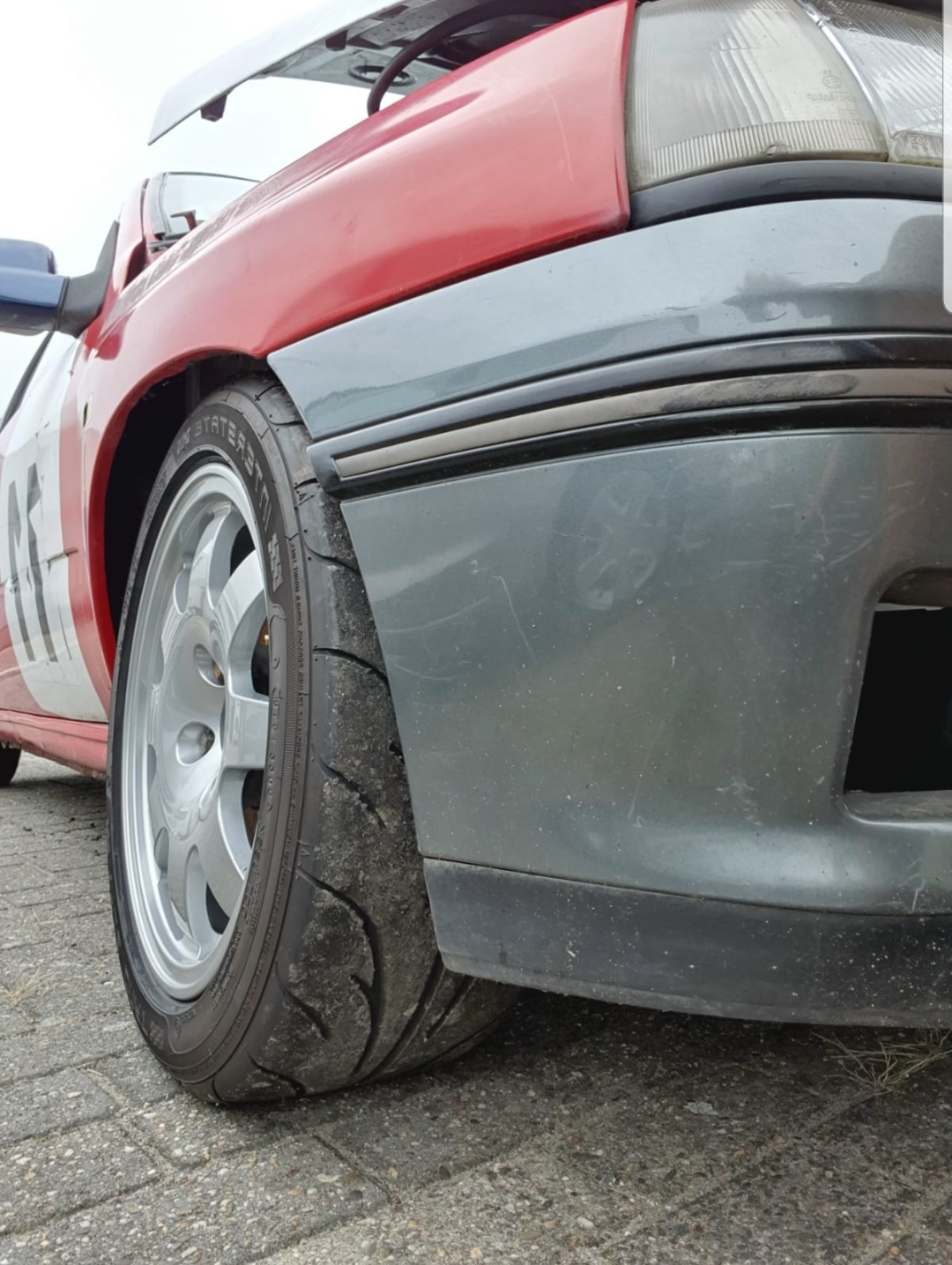 for those who are rather unknown with the mk1 cupracers.

there a basic ph1 valver with loads of weight removed.
no abs, no tractioncontrol, no powersteering, no aircon and no sadev.
basic cup stuff really.

in total it brings the weight down from 980kg's to 850 kg's with steel panels and normal windows etc. 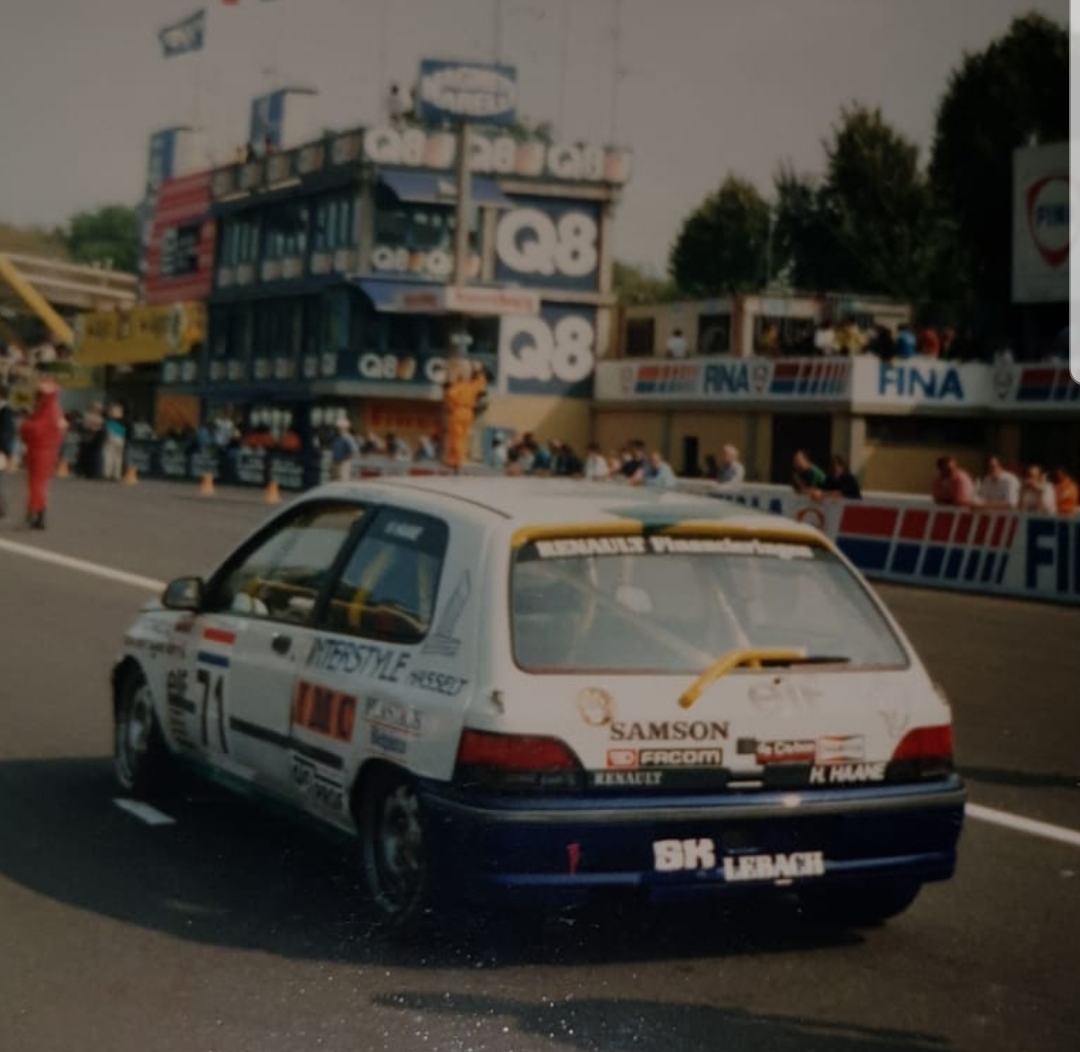 here is a photo of it in 1994. not really keen on the color sceme but i was looking for a different color either way.


for those who were wondering which color i was going to choose. its a genuine renault color by the names of brooklands green.
its a lighter version of BRG and looks amazing to my taste.


so with that settled it leaves me to go and strip the clio back to bare.

most things were easy as the windows, doors and tailgate + bumpers.
but the 8 point cage is a different story as they made it quite clever,

see it uses hex bolts in the uitright corners of the cage and is also bolted down to the floor.
when really looking at the quality its quite good for french standards.

the front bit is easy to remove however the rear bit is a different beast as it is bolted to the same bolts as the rear beam is. i suspect this had been done because of the extra stiffness added by this.

next update is going to be regarding the hubs from a x65 or mk2 cupracer.


during the 2 year period i have owned this car alot if developments have been done by the valver groups on Facebook. Paul (harlowcupracer) told me about the 172 wide track conversion and the stub axle conversion where you basically make the 16V a much more modern track car
needless to say i got to work, since i work really close to a Renault specialist i have access to a huge information supply.

needless to Say me and Henk went to work on parts number from the hubs from the following cars:

Henk had new ones around so i got those for experimental work and i got to work,

i found out that the Scenic RX4 and the Laguna 1.2 uses the same 60mm hubs as the 182 cup/trophy.
the Laguna 1,6 16v uses the exact same as the 182 cupracer. where most people would use the 2.0 12v ones which are just a bit different as the 2.0 dont have abs holes and the 1,6 does have them. the cupracers also have abs holes but werent used regardless. 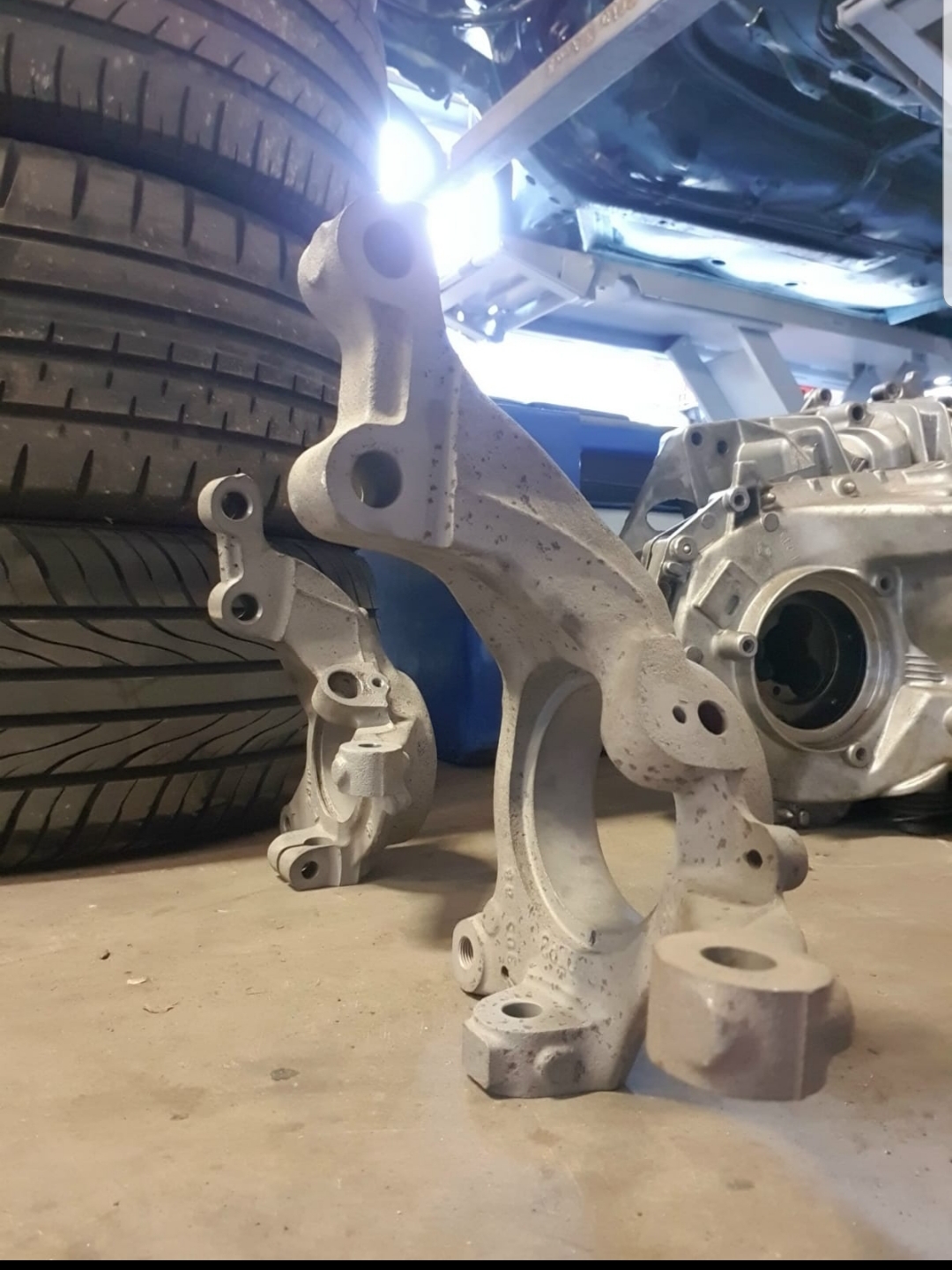 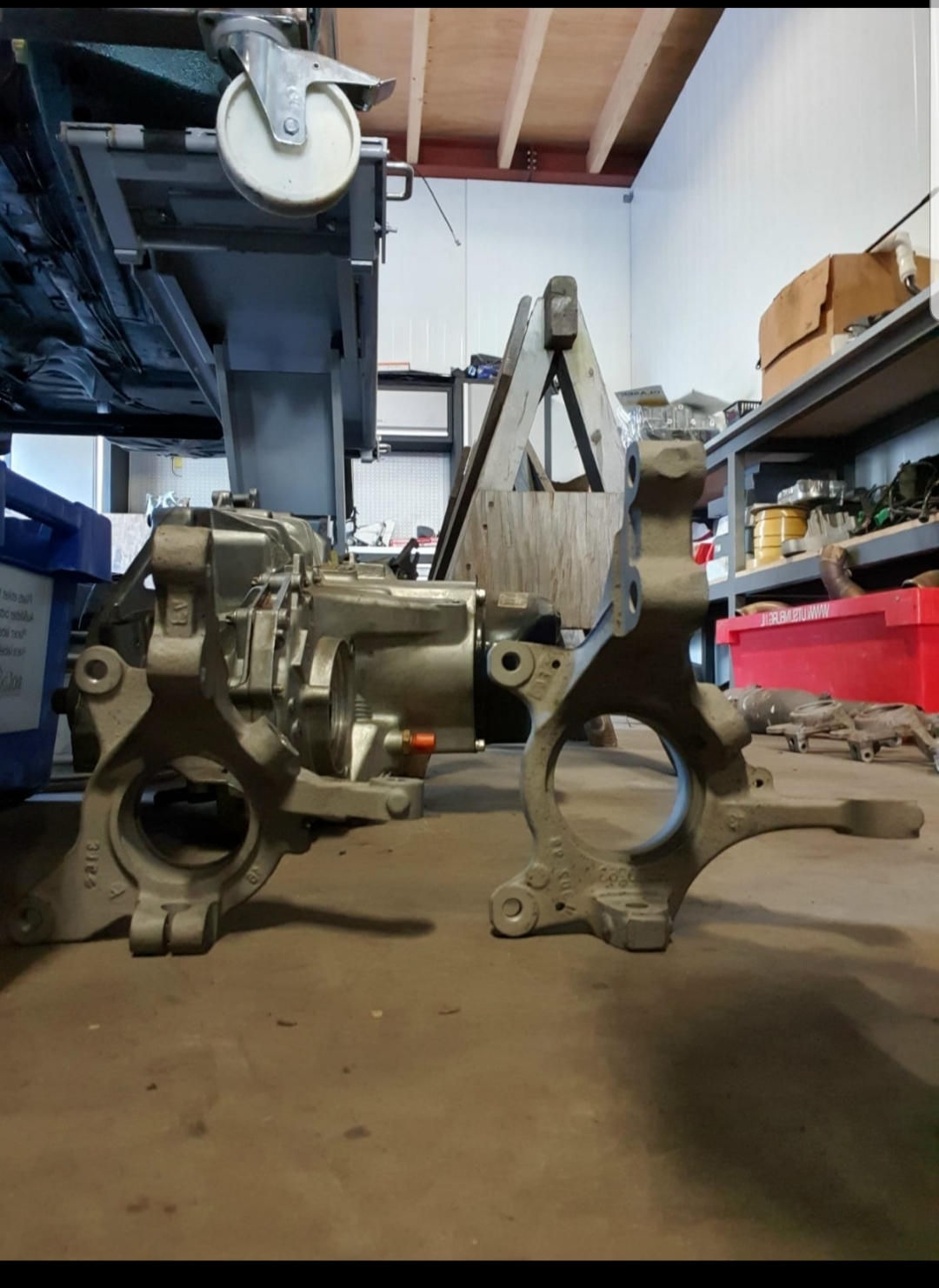 the cupracer ones also use a slightly different wheel bearing that is 0.1mm thicker then the normal laguna one as the laguna ones have the abs ring directly on the bearing face.


i've yet to bring all the parts to the powdercoater and get on further with the process but that will come eventually i guess.

as the mk2 cupracer use a 65mm spacing between the holes of the coilover i needed to get me some mk2 cupracer shocks but ive found another way around that issue as the bilstein inserts the mk1 uses fit directly in the mk2 coilover body therfor letting me switch from the mk1 outer bodies to the mk2 ones which are also adjustable.


there for i can make my mk1 alot more modern and increase the track width around 30mm per side, now i have created another bigger problem as my front arches as to shallow to fit the wheel behind, god do i love the issues a 30 year old car brings along.

now i just need to figure out what to do. wheter to keep the x65 cupracer items and use those or switch back to 172 ph1 parts as those let me retain the standard front arches.
W

ClioSport Club Member
Several
Nice to see another Cup car getting some love!
You must log in or register to reply here.