Should know by next weekend if Ill be getting it
D

Well Ive phoned the insurance company and my insurance would only go up between 140 pounds and 324 pounds a year depending on whether i fit a satellite tracking device to the car or not. Guess Ill get a tracker then

Just have to sell off a few things, like my PC (got a nice new laptop to replace it), an old DVD player which a lady booked this morning, and my current car (got a very interestedd buyer) to get a nice decent deposit and then depending on my annual increase, Ill hopefully be on my way to the dealer to get it.
V

I hate my girlfriend... I tell her Im planning on getting the 172 and shes dead set against it saying there is nothing wrong with my car and I dont need a faster one cos I drive fast enough as it is...gonna have to persuede her otherwise...maybe take her out in the 172
M

tell her its got leather and it looks nicer and u will let her sit in the passenger seat if she good and ne way say its your money not hers its up to u what u spend it on.

and if she gets mad buy her some flowers and take her out for a meal, then bring on the water works tears always do the job !!!

Mate - At the end of the day its your money, which you have earnt and that means you can do what you like with it. My girlfriend hates me changing cars (Ive had 3 different cars in the 3 years weve been going out...2 of them new). She loves my 172 now although didnt want me to buy it to start with. She is probably only concered about you stacking it and hurting yourself.
N

Try the old line about it being safer cos you can overtake and get out of trouble quicker.
O

Try the old line about it being safer cos you can overtake and get out of trouble quicker.
Click to expand...

Done that with my GF she agrees and lurves the 172 interior, although currently i have been drivng about in a 1.0l Micra

Should be quite a bit safer for overtaking, infact i will at last be able to go up hills
V

I tried the whole "Its a safer car" car thing, and even included "Now youll have an airbag too" but her answer to that was "Well we wont need airbags because you wont crash because you wont be driving faster!".

Her main fear is that I wont have any money left over to take her out anymore as Im already complaining we spend too much going out all the time, so she figures Ill be spending more on the car than on her, which might actually be true but I tried talking her out of the idea cos Ive never told her we cant go out for lack of money, but I do grumble sometimes.

Anyway Im gonna keep on her case... buy her flowers, take her out more, take to a Bryan Adams concert, give her a nice xmas pressie, and hopefully shell see the light.

I do think however that getting her into the car will ultimately change her mind...just gotta think how Im gonna get her to agree on coming along for a test drive 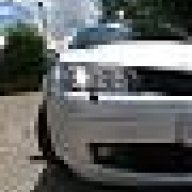 just buy it!! She will love it once uv actually got it!
W

viceroy - go for it!
It was the best decision I ever made. Give us some details - MK1 or 2, colour, mods etc. You said trade-in so I presume its from a dealer. Take it for a good hard drive first (or ask them if you can take it for the weekend) to check for the usual warranty stuff... exhaust rattle, leaks/dust entry under back seat etc. Get them to sort it all out before you take delivery.
Which dealer BTW?
BTW, did you find those star/torx drivers?
W

viceroy, who did you get your insurance quote from? Mines with A&G and they fit Tracker for free and pay your subscriptions.
V

smiley, its 2001 mk1 royal blue, bog standard except for the wheels.

Ex Renault Randburg demo with 20,000km on the clock. They said they will get it serviced when I buy it

Had a good look around the car and could only spot one minor little round indent on the driver door sill. The interior was immaculate, no burns, stains or anything. The wheels where 16" Mintys with about 12 spokes and 205/45 mint tyres but the wheels werent nice (Id get them to put my 15" on the car).

Took the car for a drive but didnt really get to push beyond 5000rpm because of all the traffic but it sounded very quiet (much quieter than my current car), Gear changes were nice and solid without the clunking Ive got in my car. and I was very impressed with the performance and Im sure I would have been more impressed if I got the seat just right (it was a little high). I did however get the dealer to grab hold of the dash everytime i took a corner so I must have been doing something right.

Ill give A&G a call, see what happens, but FL were cheaper than OutSurance

Oh on a sour note, I was on the highway on my way to the 172 when I got struck in the windscreen by a chunk of something so i have a great big crack right in my line of site.

the first one was going for R134,995 with 100,000 on the clock, a nice paint chip out of the rear bumper and cigerette burns on the driver seat.

Neither could stand up to the 172, but I do prefer the 206 gear knob over the clios.

As for the gf, I got an earful when I spoke to her afterwards but towards the end she did ask what colour it was, so Im going to take that as grudging acceptance of me being young enough to be stupid and old enough not to worry about it
W

Yes, I like the blue. How much are they asking? Ask them if they have the original rims as well (if it was a demo, why does it have aftermarket rims?) I would also have a look around at whats available in AutoTrader before making a final decision - I got mine privately with only 6500 on the clock and R10 000 less than any of the dealers.
W

BTW - the 206 cant compare and doesnt even come close. I drove my brothers one at the coast last weekend and I was disappointed. That sloppy, long throw gear shift is aweful and the plastic panels inside are terrible quality.
V

Ill ask them about the original wheels but I get the feeling they wont have them.

Ive been looking around for a few months now and I saw this one which is R10,000 less than any of the other dealers, and I havent seen any that come close in terms of mileage or price. I would love to get privately but Ive not seen any.

I actually found this one in AutoTrader

Vice - is that the one from Honda Edenvale?

If so, please be sure to call Renault HO - 011 607 7300 and ask them about the warranty before you commit. Last I heard when I bought mine is that they will no longer honour the warranty unless its bought privately or from a Renault dealer. Also, get the VIN number and ask Renault to run it through their system. If its done 20000km and was meant to be serviced at 15000km the warranty will also be void. They will also be able to see if its had any major repairs done.

Please dont get me wrong. I dont want to destroy your excitement, but Ive learnt from experience to be VERY careful. I would have to look at that car myself in the flesh, but those rims look very similar to those on one I saw at 2 other used dealers when I was looking in July. If the car is moving from dealer to dealer, it could be a problem.

Also, have a look at the figures. If youre buying on HP, R10 000 over 4 or 5 years doesnt add much to your monthly installment.
W

BTW - if it all checks out fine with the warranty, its a good idea to get an AA check done. If they pick anything up that needs fixing, you can always get them to drop the price to cover it.
W

Sorry to sound so negative everyone, but if theres one thing Ive learnt over the years, it is to NEVER TRUST A CAR SALESMAN!
V

Thanks for all the info Smiley,

Ive also learnt not to trust ANY salesmen.

Yep, its the Honda Edenvale one.

As far as the warrenty is concerned, all Clios purchased before Mid June are on a 20,000km service interval or 2 years, and after that date the service interval was changed to 15,000km or 1 year. I will however get the VIN number and give Renault a call.

Ill also give the AA a call to see if I can get hold of the owner history on the car as that will be an indication of whether it went dealer hopping.

I like doing my homework especially on big purchases, but even then it doesnt always work as Ive had HP companies trying to take a car I bought (A mastercar at that) saying it wasnt paid for...luckily Mastercar sorted it out.