A bit about me first, I'm a mechanical design engineer & welder by trade. I've welded & prepped many a classic car in my time & I'm not scared of getting stuck into things.
It's a long story but...

I used to have a Vauxhall Nova Stock-hatch Rallycross car, the rival car in its class at that time was the 205 GTI, so I bought one in 2005 & had some fun in it!
At the same time a local lad I used to knock about with bought a 3-year-old Clio 172 Cup. He let me have a go in it; and I was blown away with the performance over the 205. I've always craved after one since then.
Meanwhile in 2009 after working away in Holland and becoming a self-employed welder, I wanted a practical cruiser with a large boot (BMW, MERC). I came back home & earned some good money so being a petrol head I bought an Evo 8 which was a hoot! I really should've bought a diesel estate for work & after 7 years of daily driving an Evo I needed something more practical & better MPG. So, with doing literally no research at all I went to buy one. 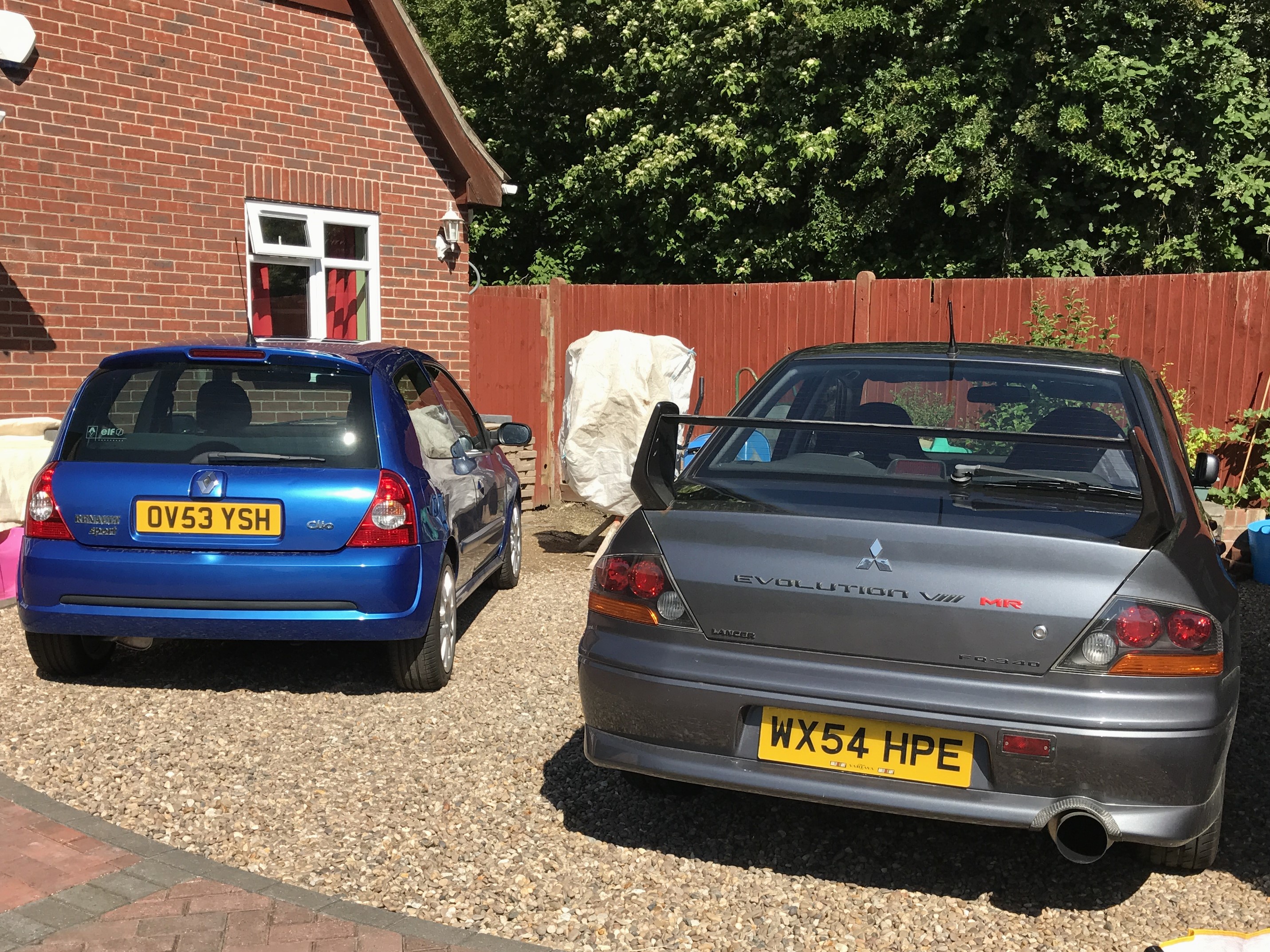 Excuse the messy drive; It was a work in progress.
People used to ask me: "what car do you buy after an Evo?"
I travelled down to London on the train, did a bit of sight-seeing: 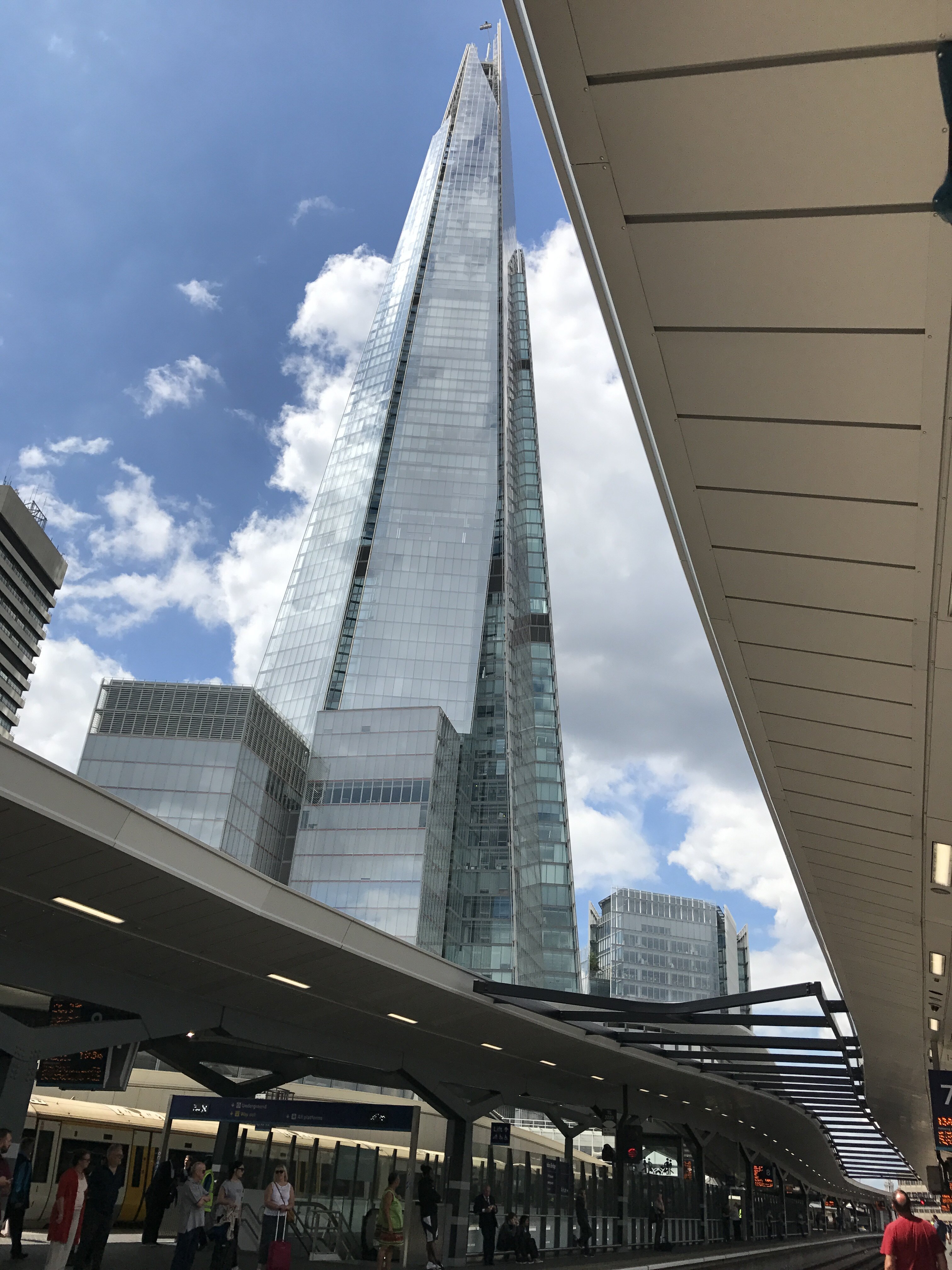 The guy who was selling it let me test drive it & mentioned; "It goes well doesn't it?" I felt a bit bad saying: "I'm used to an Evo" I found the driving position a bit funny & the steering wheel pointed toward the center of the car which reminded me of the Nova.
After a negotiation & a faff about for insurance, I came home with it. 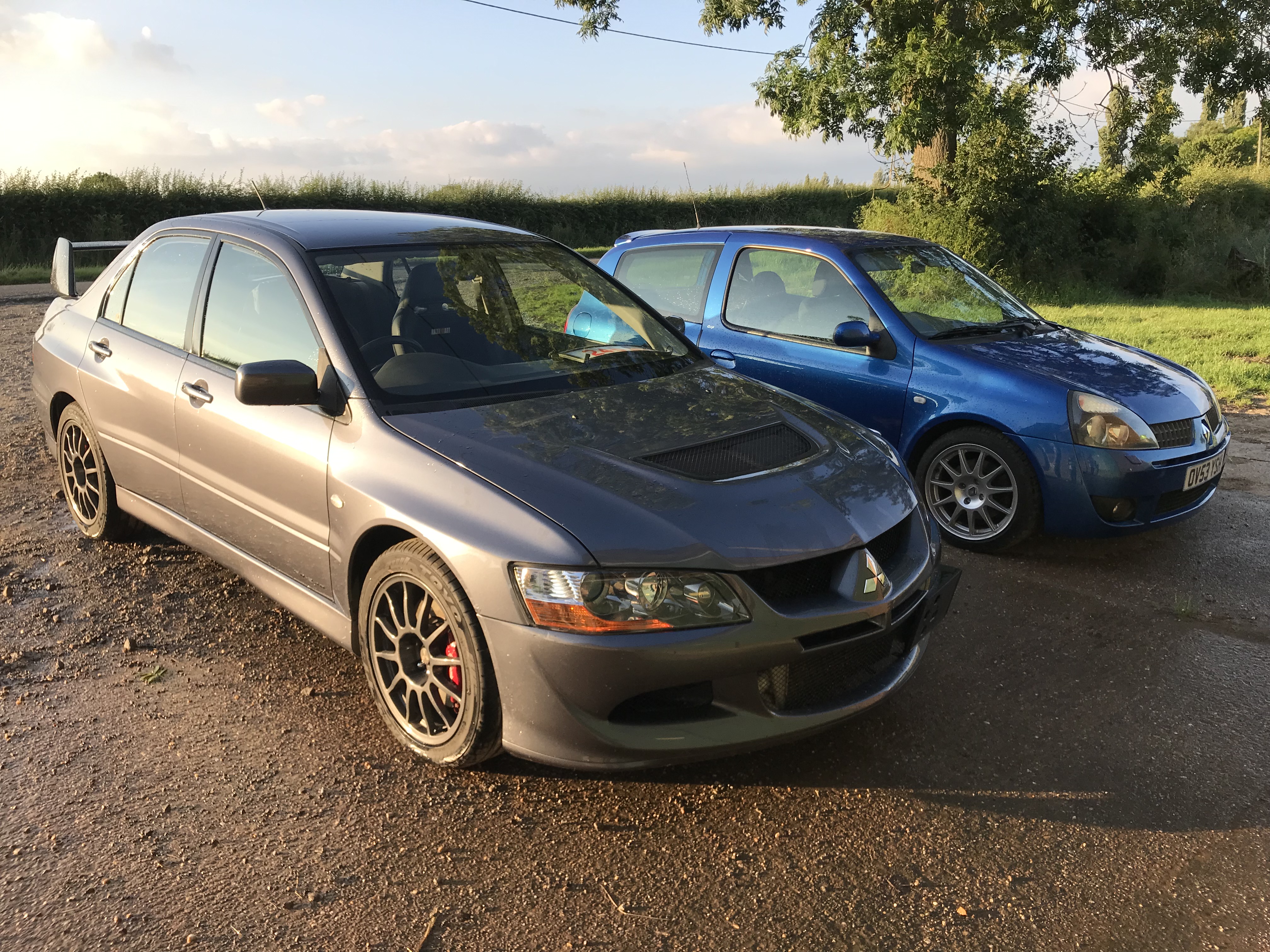 I knew the car wasn't perfect when I bought it, but I had the same feeling of apprehension when I bought the Evo & after a few years of ownership I felt that I did the right thing.
There were a few missing components (front arch liners & plastics) a suspicious earth wire & a few tell-tale signs that the car had been used as someone's toy rather than their pride & joy. But in all fairness, it looked fairly standard & capable of being an OEM standard car again.

First jobs were a new Windscreen & paintless dent removal all round.

Any way enough about other cars & me babbling, a few photos: 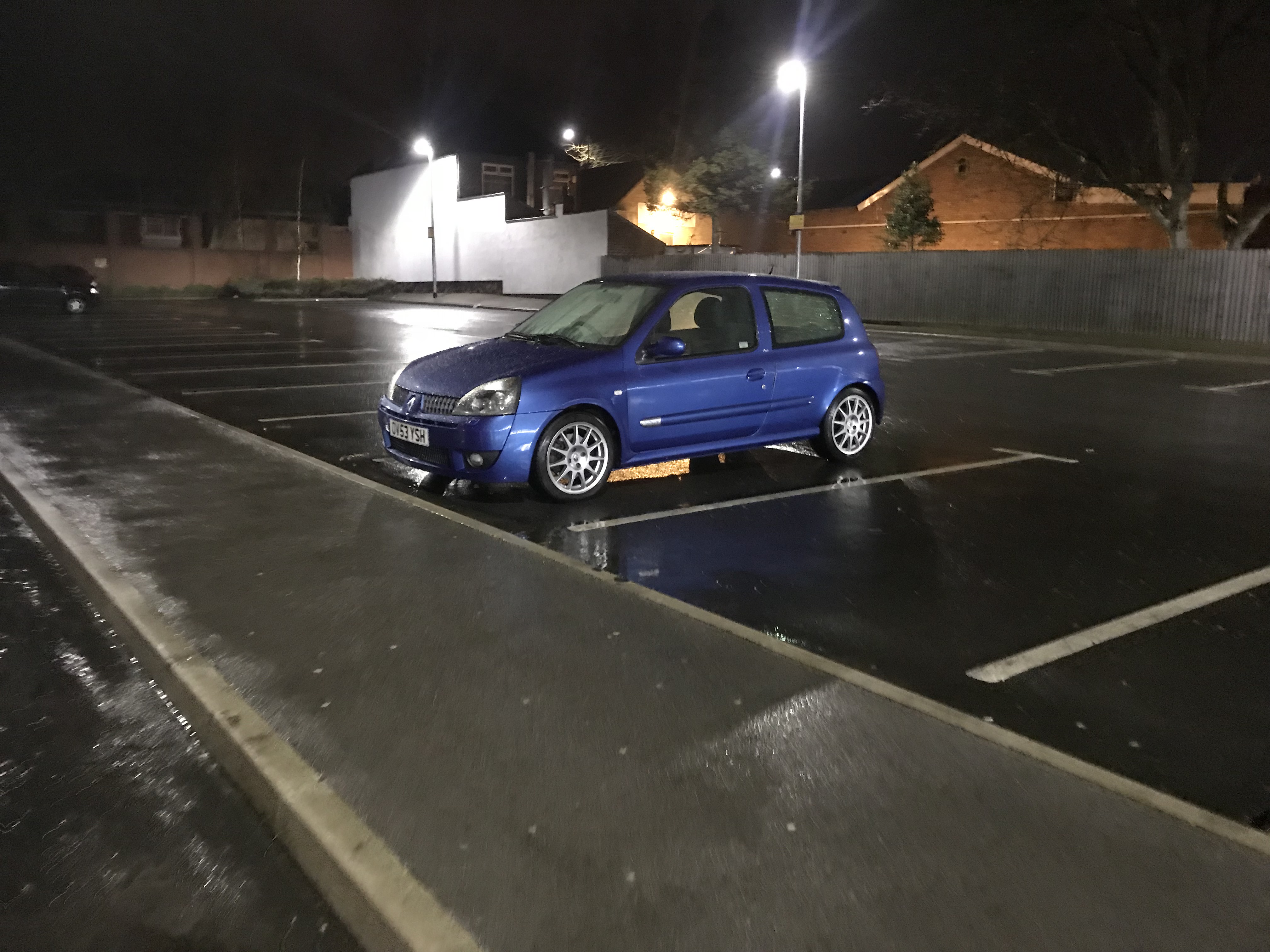 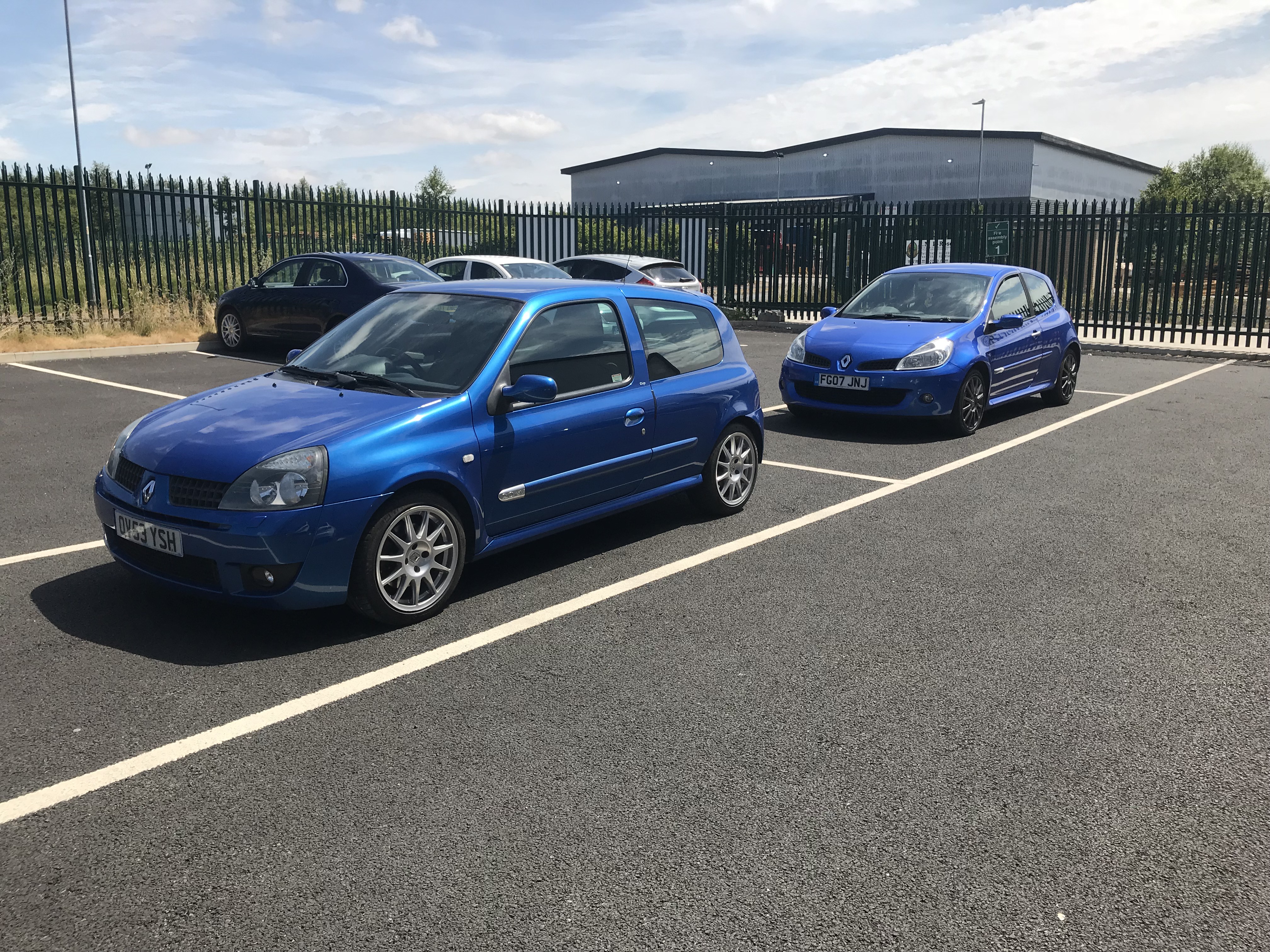 An arty shot with a mates Fiat 500 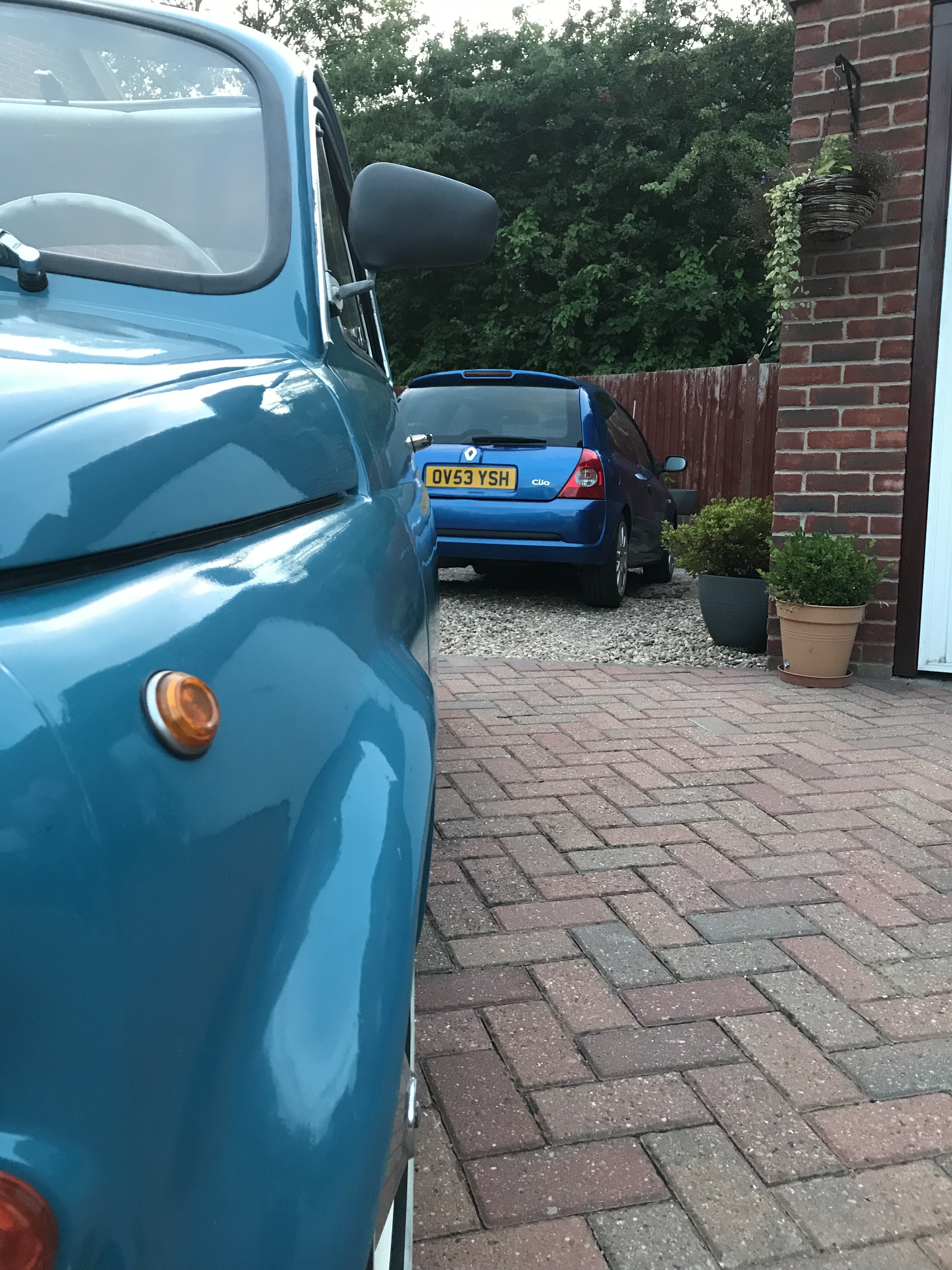 Even the missus likes it as she's insured on it unlike the Evo!
Note the plastic strip on the edge of the door, they stayed there on both doors till the underbody refurb this year. I left them on for extra anorak points! 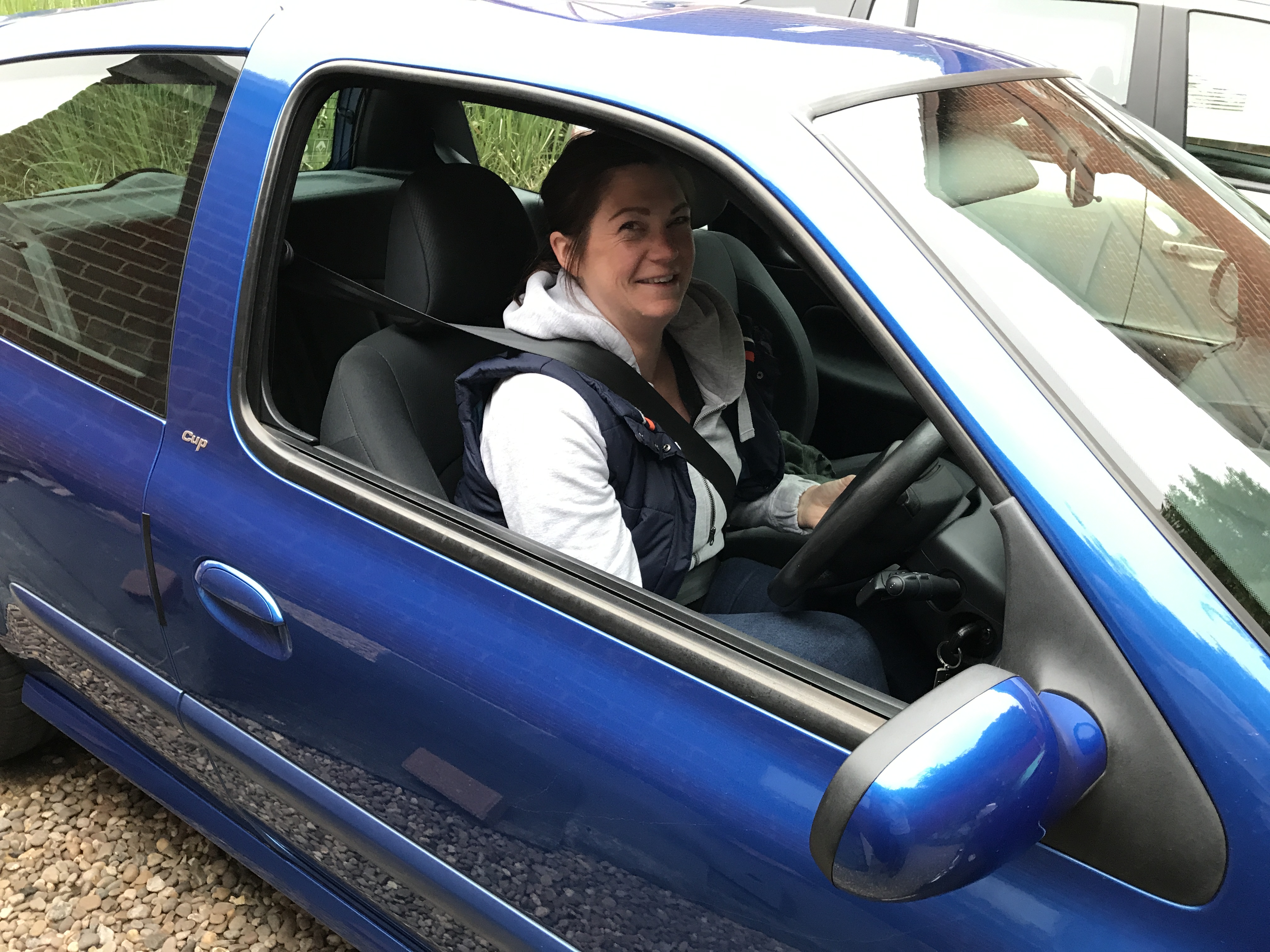 Clio's are even good trackday service barges. A fellow Clio owner did come over & compliment me on the car, which was nice.
I bought some 182 wheels as they had brand new tyres on them, but then my brother needed them for this trackday because the tyres turned out be sticky Dunlop's.
Note the lack of wing mirror & door glass! Start of the day, just met the passenger then covered him in glass 2nd lap! 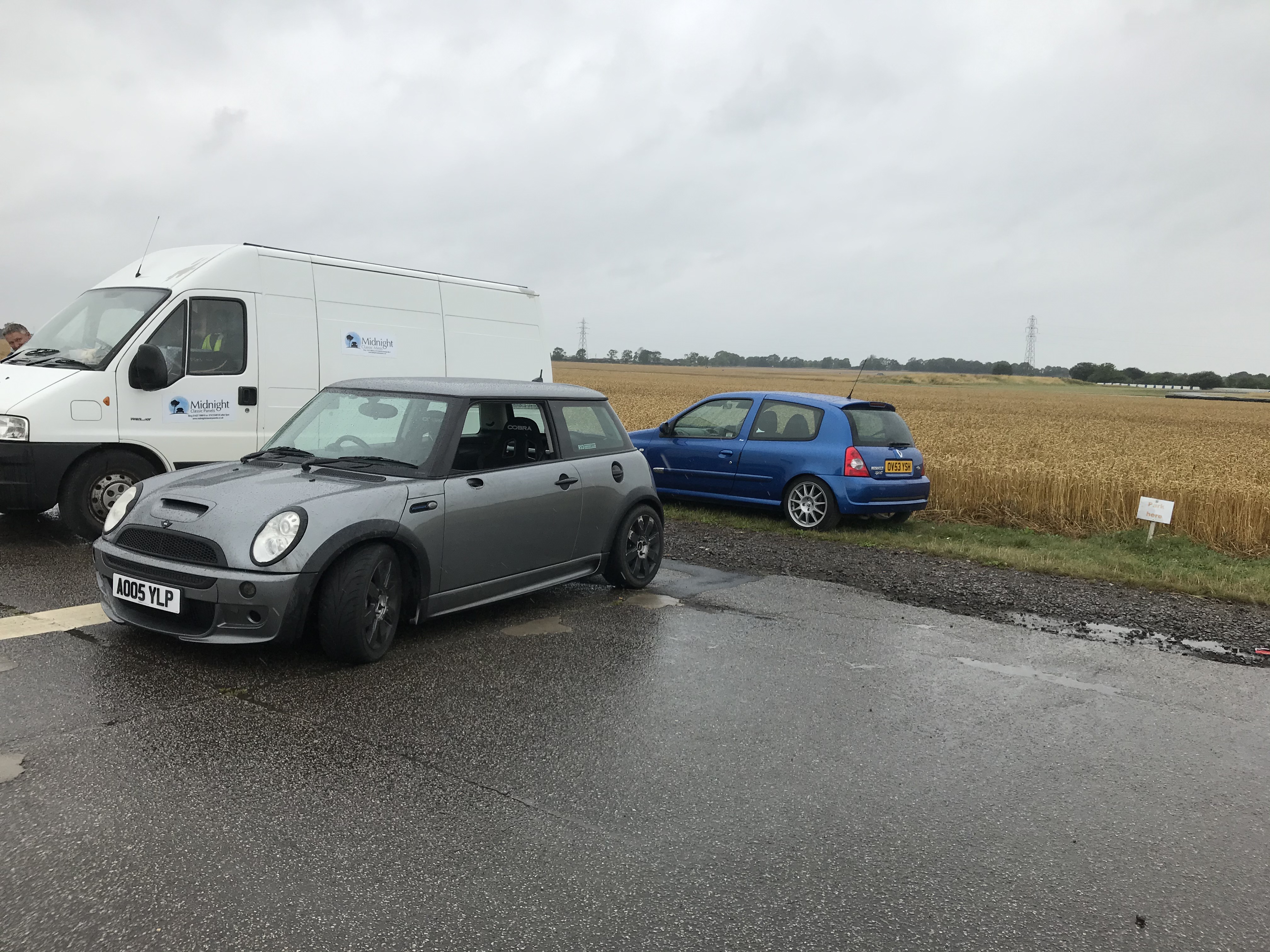 I chose the Cup model as I believed it to be simpler & use poverty spec parts, this was before I discovered the dreaded UCH module & found my car was a genuine unicorn with the Air Con option, the nostalgia of wanting one back in the day & knowing it's a bit rarer; more than makes up for those shortcomings!

Thank you for taking the time to read my first post on my Cup. Apologies for babbling but I thought I'd explain how I came to this cars ownership.
I'd appreciate constructive criticism from senior members and/ or moderators on the content as this is my second forum post!

I have many mini projects I've got to write up on in due time, some are noted here in my intro post:
Intro post with projects

You should also think about becoming a full member, its cheap and you get access to the for sale ads, lots of good parts are always being sold for these. We also do a yearly track based festival thing (I went to my first this year and loved it) which I would highly recommend. If nothing else its a very cheap track day!!

You should also think about becoming a full member, its cheap and you get access to the for sale ads, lots of good parts are always being sold for these. We also do a yearly track based festival thing (I went to my first this year and loved it) which I would highly recommend. If nothing else its a very cheap track day!!
Click to expand...

I was subscribed, it just ran out

Thanks for the kind comments!

ClioSport Club Member
All about the base
I've said this way too many times but I wish I never sold my 172 Cup. Owned from new, 125k miles, damn my sensible 5 minutes when I thought a 200 would be better instead of a daily alongside the Cup. Sniff.

Aircon though, I have strong feelings about that, rarer it may be but it's the reason the proper weight saved stripped out Cup was never done to the same degree again on later models.

ClioSport Club Member
Clio 172
I love a blue 172 cup, I'm surprised how many there are left. I was driving mine in Maldon last month and I saw two other identical blue ones. I do think you should rip out the aircon and suffer like you're meant to.
L

ClioSport Club Member
Nice evo. I have one too.
But 172/182 are great cars

ClioSport Club Member
Clio 172 Cup, Evo 8
Thanks for all the kind comments.
A couple of things to note due to some comments:

When I viewed the car, the seller mentioned the air con being rare with only around 130 made. I was actually a bit disappointed because I believed the cup to not have Air Con & knew this was another ancillary with associated pipework to get hands around when working on it. The same summer I bought the car (2017) I got the A/C tested & gassed up for £20 as it didn't really seem to work. Having been used to Air con in the Evo & my missus's cars: I thought this was a bargain & money well spent, even for just clearing the screen in the morning. Also if it leaked or didn't work then the local garage would tell me or I'd find out in due time. During the summer of 2017 the air con worked a treat & during the winter months I'd warm the car for 5 mins before going to work so I didn't use the air con for clearing the screen.

So, then we get to summer 2018 & was told I had to go on site for a measure up/ survey at a factory in Bootle just north of Liverpool, there were lads already on site doing the install & being a contractor I would usually take my own car, so I took the Cup, did the work on site & got on the road home.

I then soon found myself in a cue of traffic, on the first day of summer, went for the Air Con & got nothing but hot air!
I sat in that traffic for around 45 sweaty minutes frantically pressing switches, opening vents & even resorted to kicking the heater box next to the footwell in the effort of a freeing a sticking vent valve/ flap.

So even if the A/C is there doesn't mean it works & mine hasn't done since 2018. Because of this, I don't really miss it, I just work round it & thought I'd just "suffer"

I then questioned the authenticity of the Air Con option & due to the sought-after Cup ancillary setup I thought that maybe it was swapped out by a previous owner for another car. If this was the case, then I would want to convert back to the original setup as I'm a bit of an anorak & like things to be OEM. I then came across the MY RENAULT APP which was mentioned on here & found my car indeed had the Air con option, it then seemed like less work to get it working again than to remove it all! 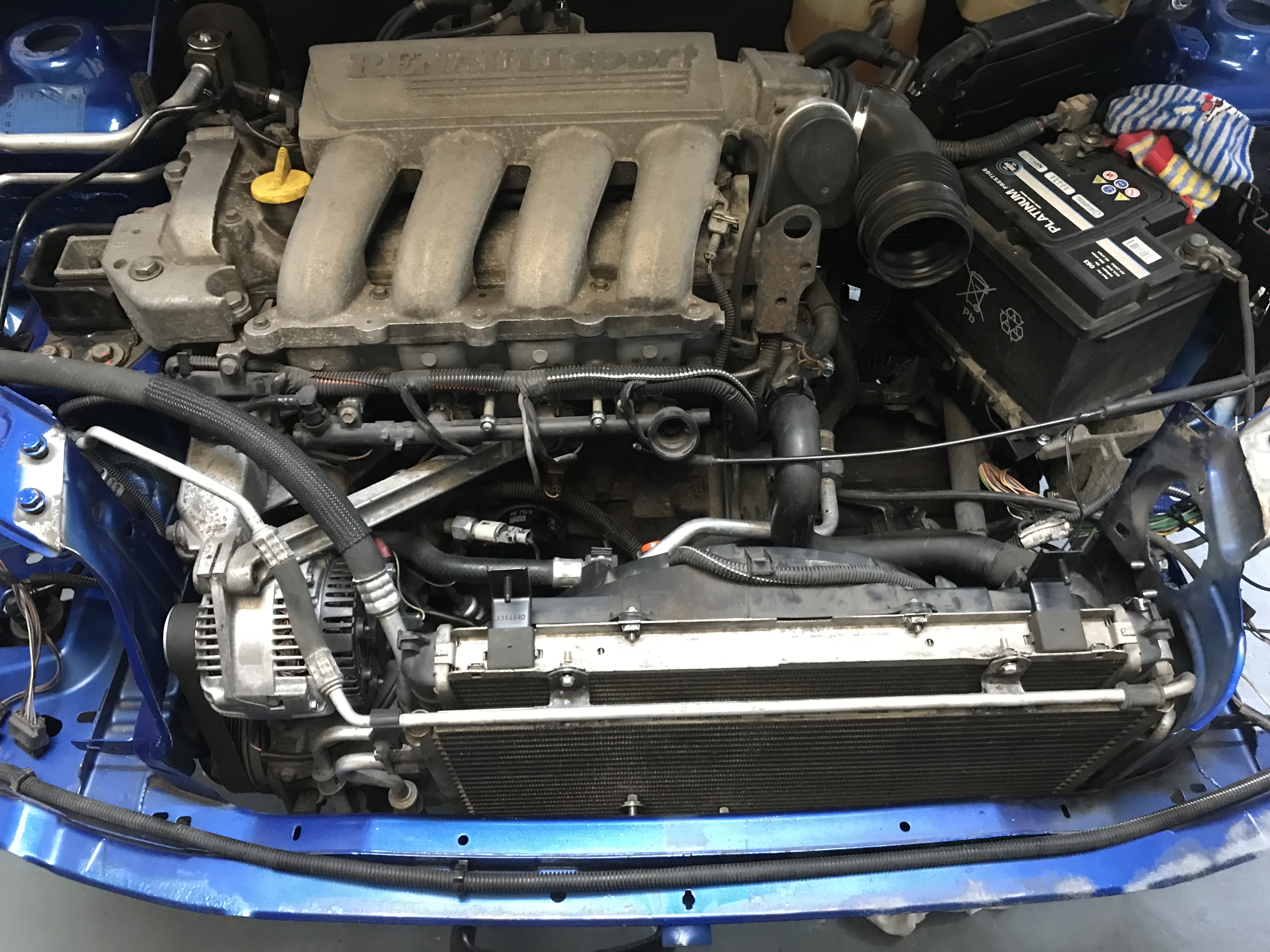 ClioSport Club Member
Clio 172 Cup, Evo 8
So after a fairly uneventful winter bar the battery draining after a few days, I had a reminder of French car ownership! 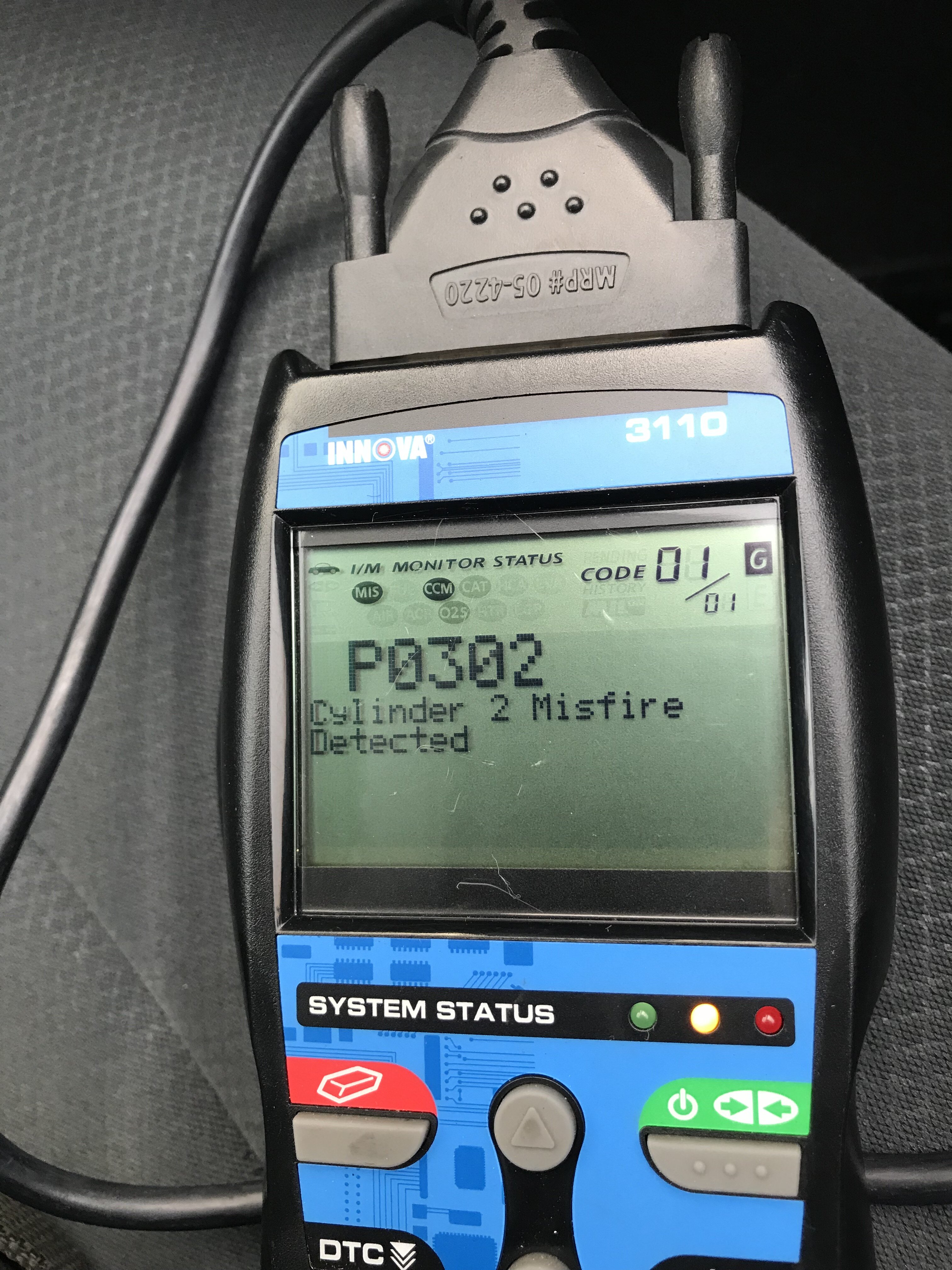 It rattled a bit in time with the engine note then cleared, so I cancelled work that afternoon & drove it straight home for a look. On the way home it ran fine, although I was reluctant to thrash it due to the rattle & feared doing more damage.

Went for the obvious first then found this: 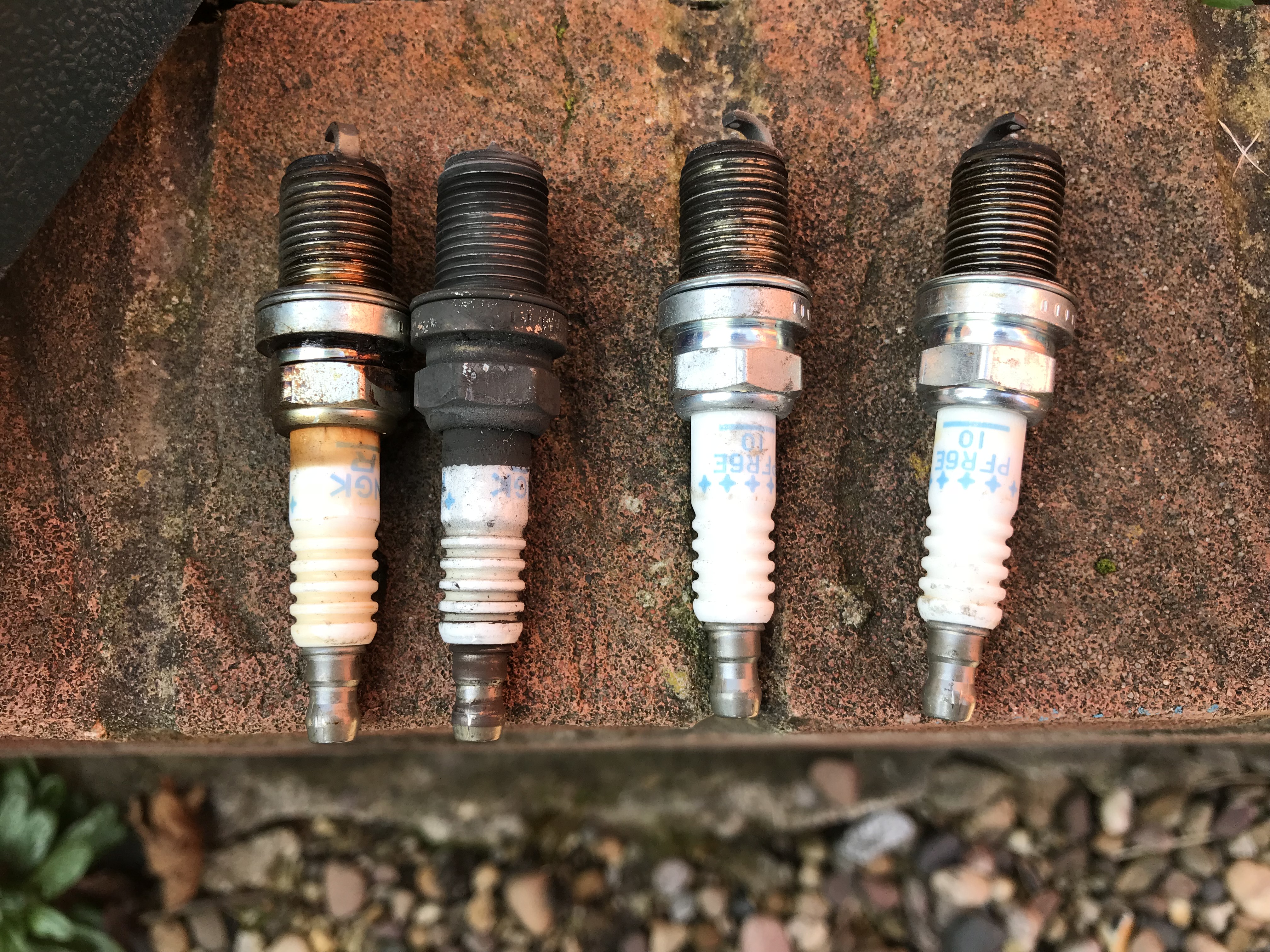 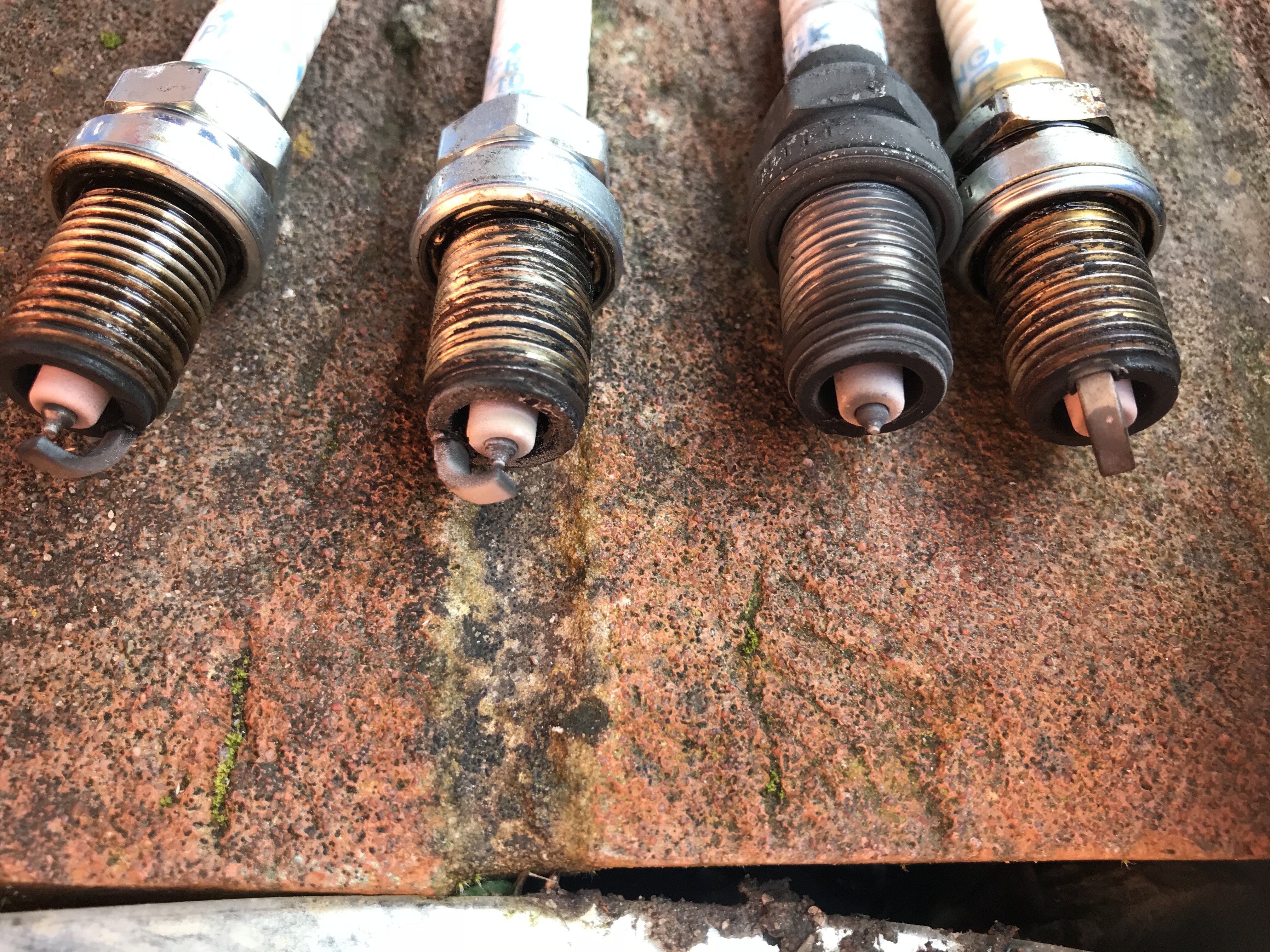 I then found the spark plugs ground electrode in the lower section of the inlet manifold. Somehow the spark plug had come loose & possibly got hot? Which could've caused the side electrode to weaken it's weld to the shell? There didn't seem to be any damage to the threads & looking down the hole I couldn't see any shiny dented aluminum!

Note the oil leak from the dephaser solenoid. standard. 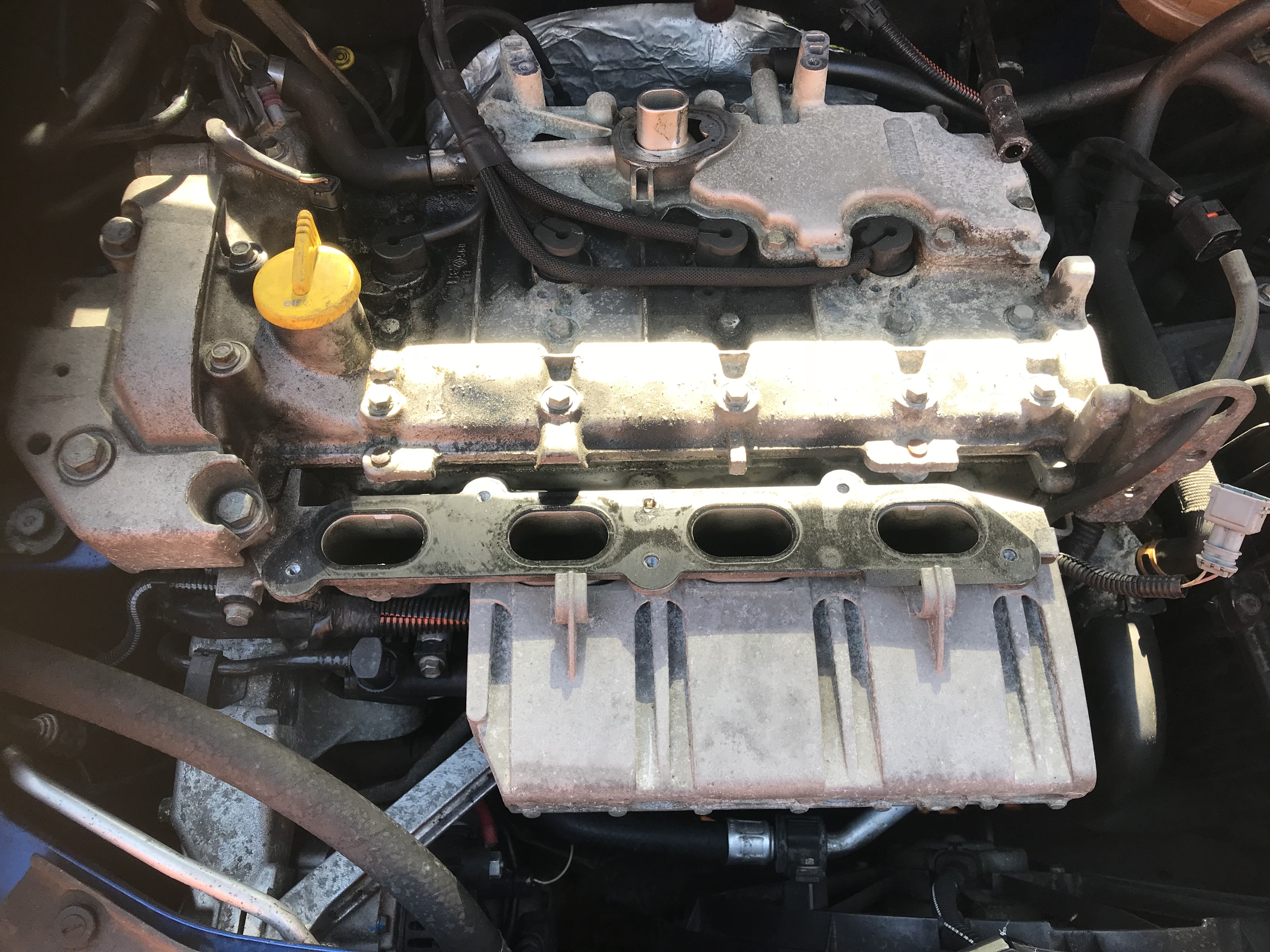 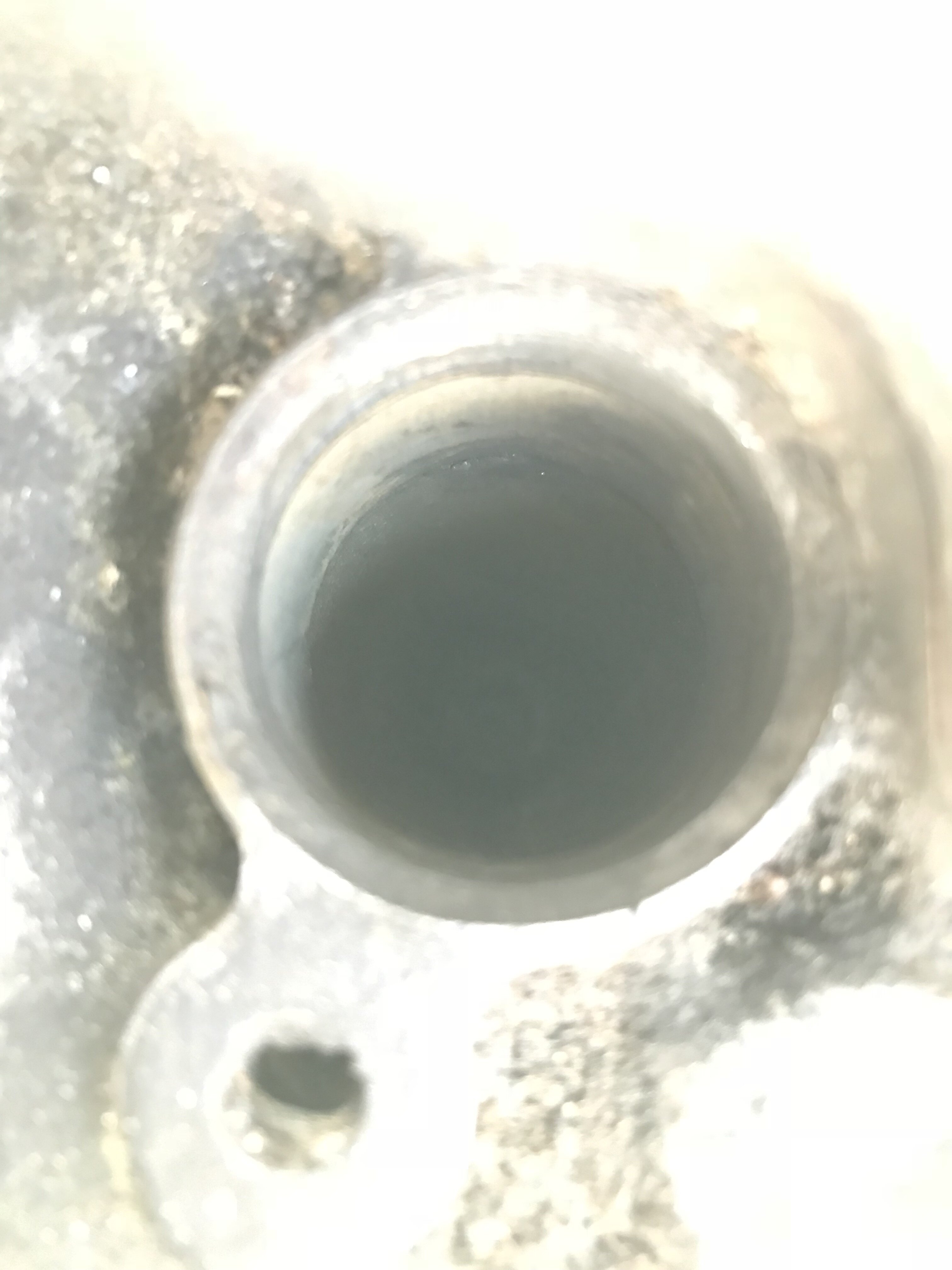 The above picture isn't great but there's no reflection or shine from the chamber, so I believe I got away with it!
I then purchased some new spark plugs for a small fortune as I needed them quick, fitted them, cleared the code & all seemed well.
In the near future I'll do a compression test & possibly an endoscope camera inspection, but the car has run fine since so It'll be more for peace of mind.

It would be nice to hear & benefit other owners If anyone's had the same problem & if anyone with experience has a theory as to why it happened?
You must log in or register to reply here.