Evening, im planning on down sizing in the next few months as my job situation has recently changed.

Im currently driving a 2L Vauxhall Insignia CDTi SRi Nav and am wanting to switch to something smaller and more economical.

Now I think ive ruled out the Punto as there just seems to be too many bad reviews regarding reliability and build quality.

The 1.4 Corsa SRi is the right size, looks good with the VXR body kit, is about £100 cheaper on insurance and £80 cheaper on road tax every year - but people say the 1.4 engine struggles a bit - 0 to 62 in 11.9 sec. Id have to seriously test drive one - wouldnt want to swap then regret the decision afterwards if its a bit too slow.

The Corsa Black Edition is one I really like - 120bhp 1.4T engine - unfortunately its nearly 10k which is a few thousand more than I wanted to pay. To be honest id like to get as close to doing a straight swap over as possible as ive been stung on finance before now so want to avoid it.

Now my Dad has always had Renault, as far back as I can remember. Renault 5, 19, Laguna and now a Clio.

I was looking on the old Autotrader and saw one called the Clio GT 1.6 VVT 128. They seem to have stopped making them around 2010 / 2011 for some reason but they are incredibly affordable. Theres a few there at 6 / 7 grand with reasonable mileage.

Anyone on here got one that can recommend them?

Can you get decent mpg out of one?

The insurance is pretty much the same for the Clio as it would be for the slower but more economical Corsa - For reference Admiral quoted me £258 for the GT. Which is less than im paying now and a hell of a lot less than ive had to pay for insurance before!! £1800 a year to insure my Toyota MR2 Turbo was a killer.

Are there any inherent faults with the GT? Did they stop making them for a particular reason? My Dad's never had any problem with his.

Also if my financial situation changed in the future and I suddenly found myself in the money - can they be reliably modified?

Hope you guys can advise 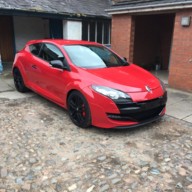 Yes but ill only be doing about 5k miles a year for the foreseeable future so a diesel would be pointless.

Thats one of the main reason why I dont need a big 2litre diesel one sat outside the house.

ClioSport Club Member
182 RaceVan
a clio GT will be a lot worse on fuel than your CDTi your currently driving! the K4M is horrendous on fuel for what it is! and gutless too! id rather have a 1.2 TCE Dynamique SX
You must log in or register to reply here.
Share:
Facebook Twitter Reddit Pinterest Tumblr WhatsApp Email Link