172 Ph.2
Hi guys.
I've been here for a couple of years now just reading, learning and sometimes (well, all the time) drooling on other people's projects, and for some reason i feel like sharing. I don't know why, you've done nothing wrong :tongueout:. There are some questions i couldn't find answers to and hopefully my experience will help someone. Mind you, compared to all the others this will be a very boring thread.

I'm trying to do as much as i can on my own, however i am lazy as hell and do not always have the right tools, the time or the place. So everything i can i do at the underground parking of my apartment complex at night after work or at a parking lot of my workplace on weekends.

The Clio RS culture is almost non-existent where i live (compared to UK we've got nothing) - no fancy workshops and barely any choice of aftermarket parts. Instead people are going nuts over the German autoindustry. If you happen to have anything AUDI/VW/BMW based (Mercedes not as much) you can absolutely legally end up with 500+HP in your kitchen mixer.
MOT laws are strict as hell: no chassis or engine modifications are allowed. Well, theoretically you can have your engine swapped, but only if your model range has the one you're changing to listed and if you have acquaintances at the MOT facilities or at the workshop. I have no such connections so no turbo conversion or engine swaps for me.
In my case the main rule would be - if it can't be seen it can be done, and if it can it should not draw much attention (hence the red and blue hoses under the hood :laughing

One last disclaimer: probably every thing i did was out of boredom. So if you hear yourself asking "Why the hell?.." or "What for?" the answer is: i was bored and that seemed like fun. And it most certainly was.

OK, apologies for the blabbering, on to the subject.

No aftermarket parts, even the engine with ~200kkm was never replaced yet.

The paint has seen better days and there are a lot of dents and bumps here and there, but i'm not really into looks. For me it only matters how it feels on the road. And as you can imagine it was everything one would expect. 4 years later i still can't hold the stupid smile when driving. 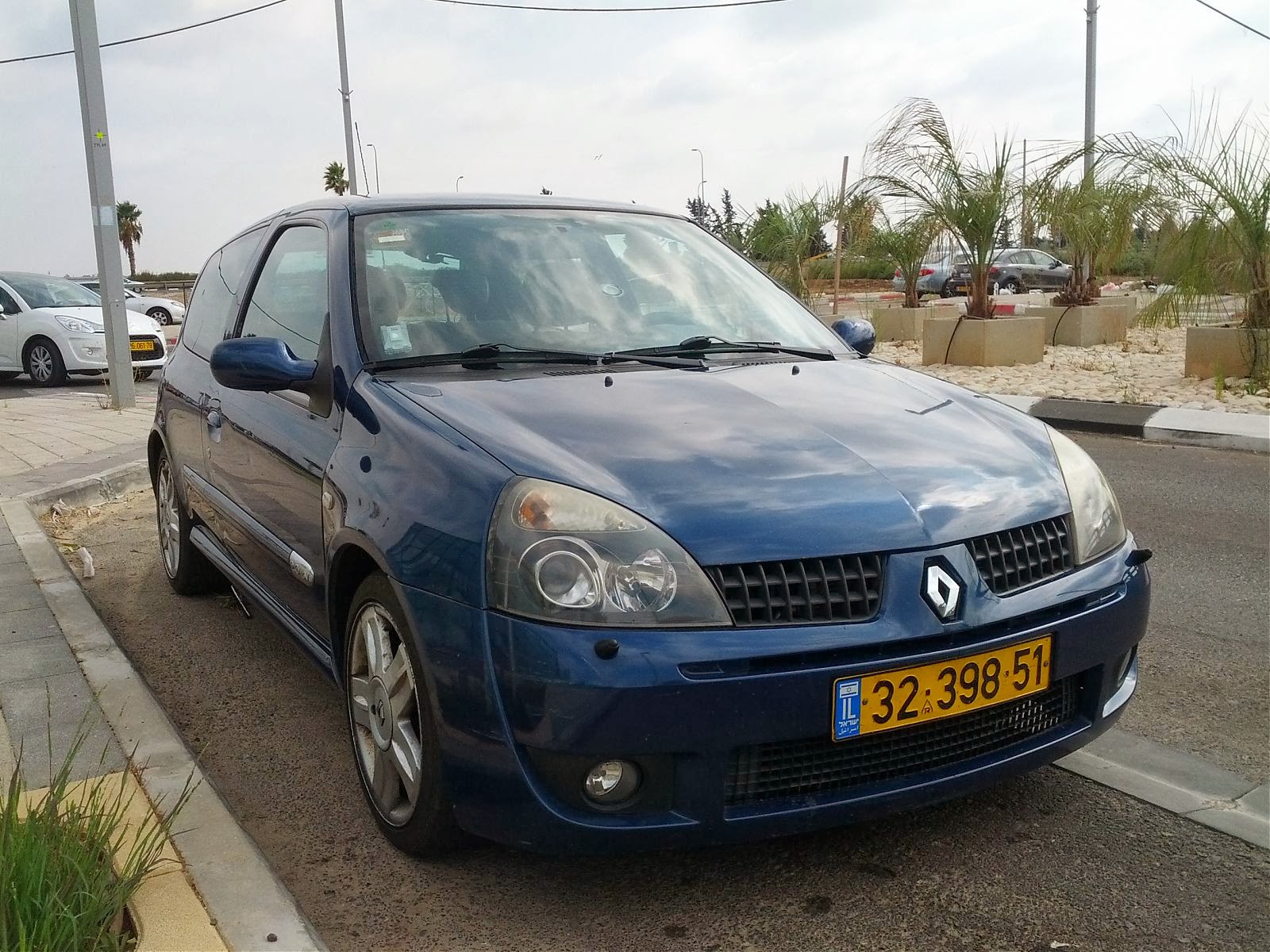 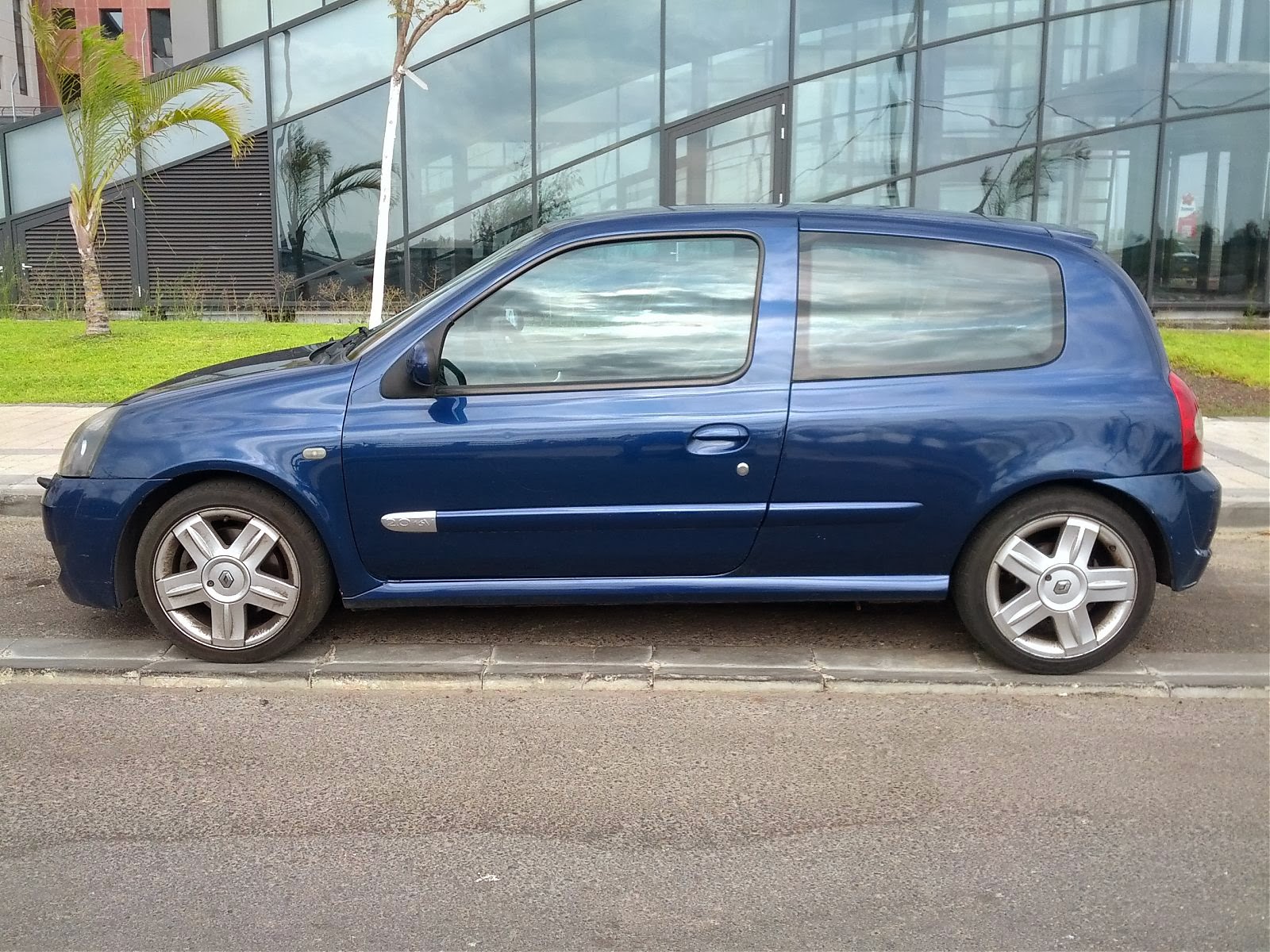 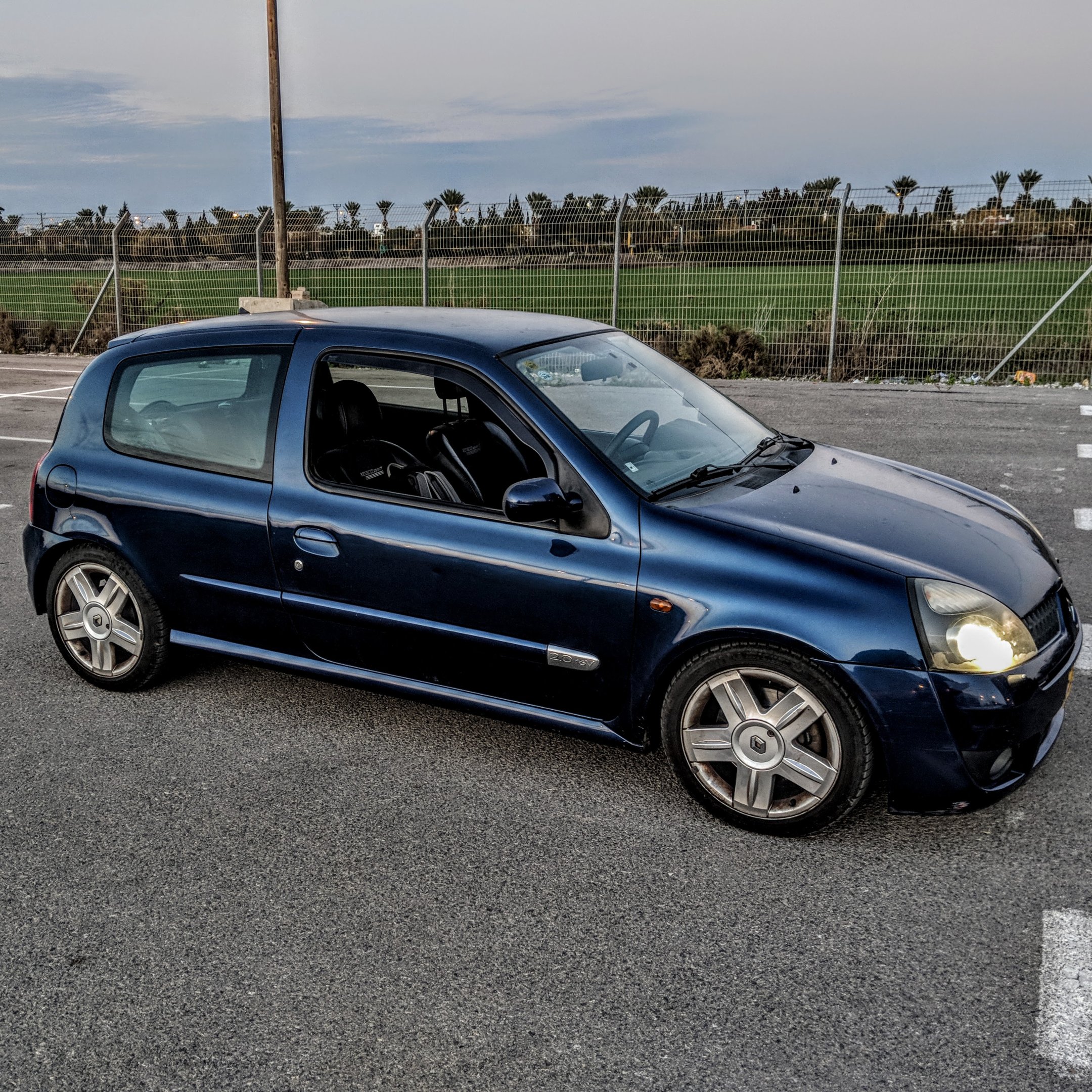 172 Ph.2
Couple of drives later the gear lever appeared to be living on its own, so i've decided to replace the engine mounts. As it turned out the left one was completely torn, so in went the Vibra-Technics. 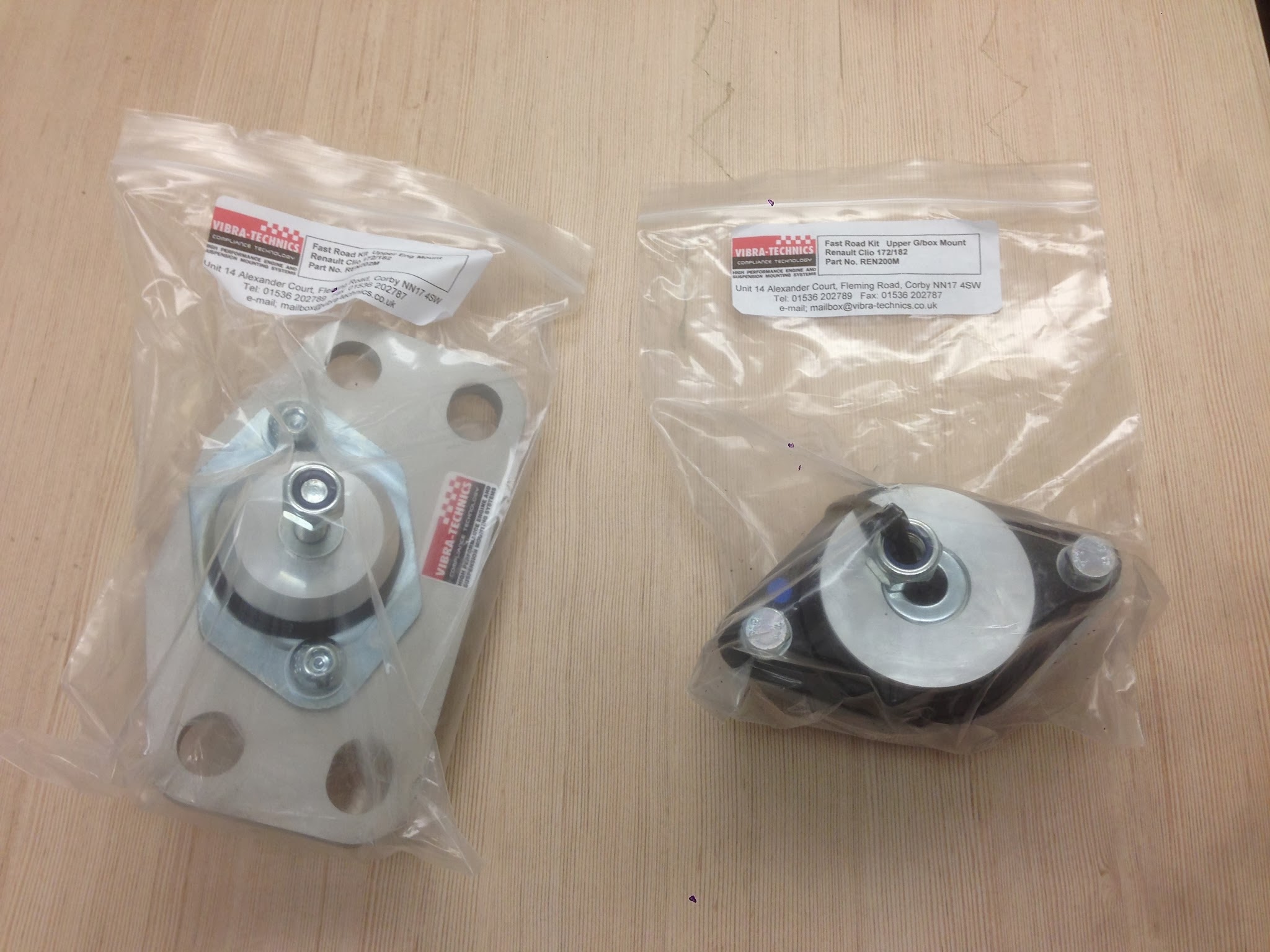 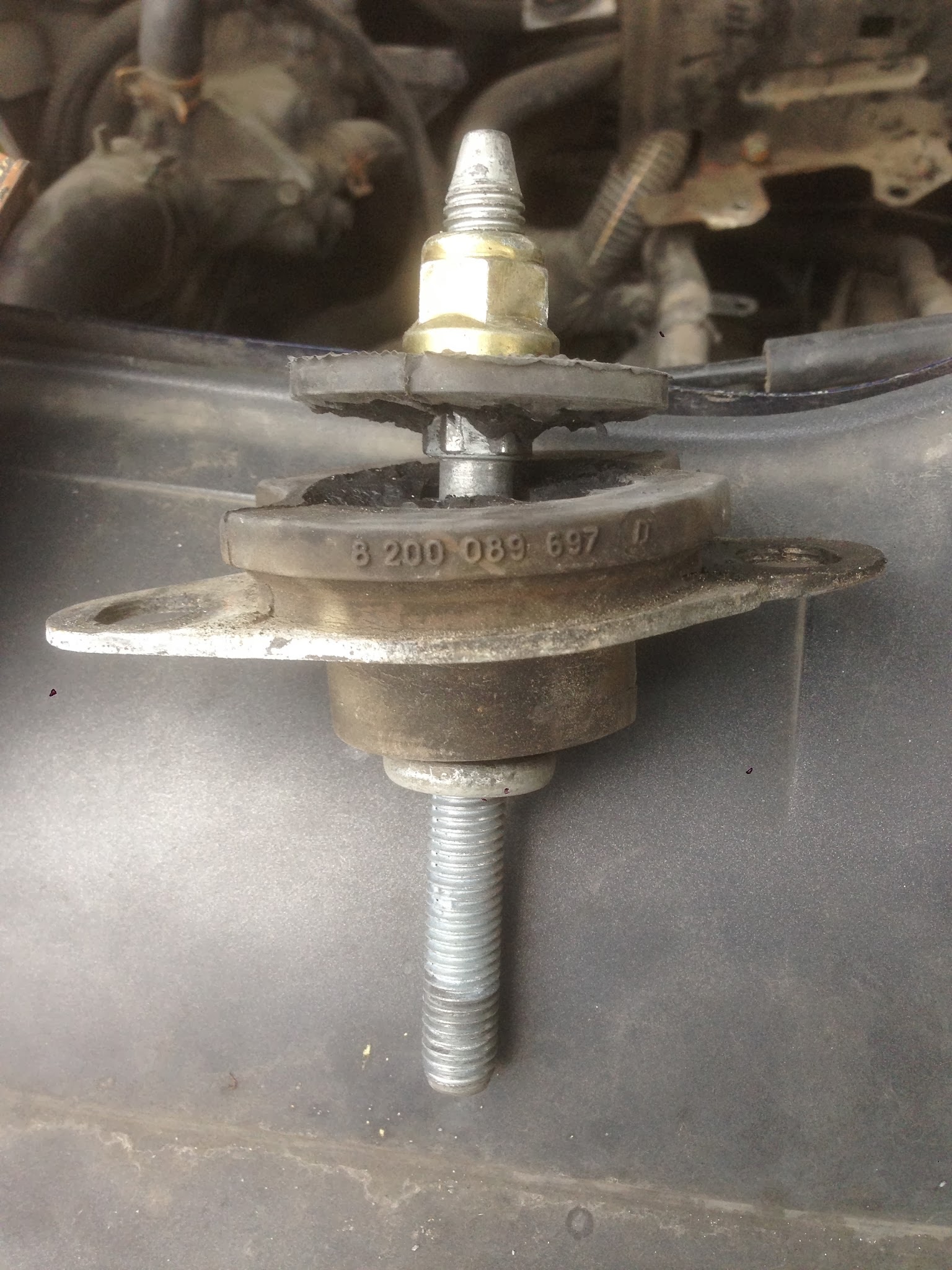 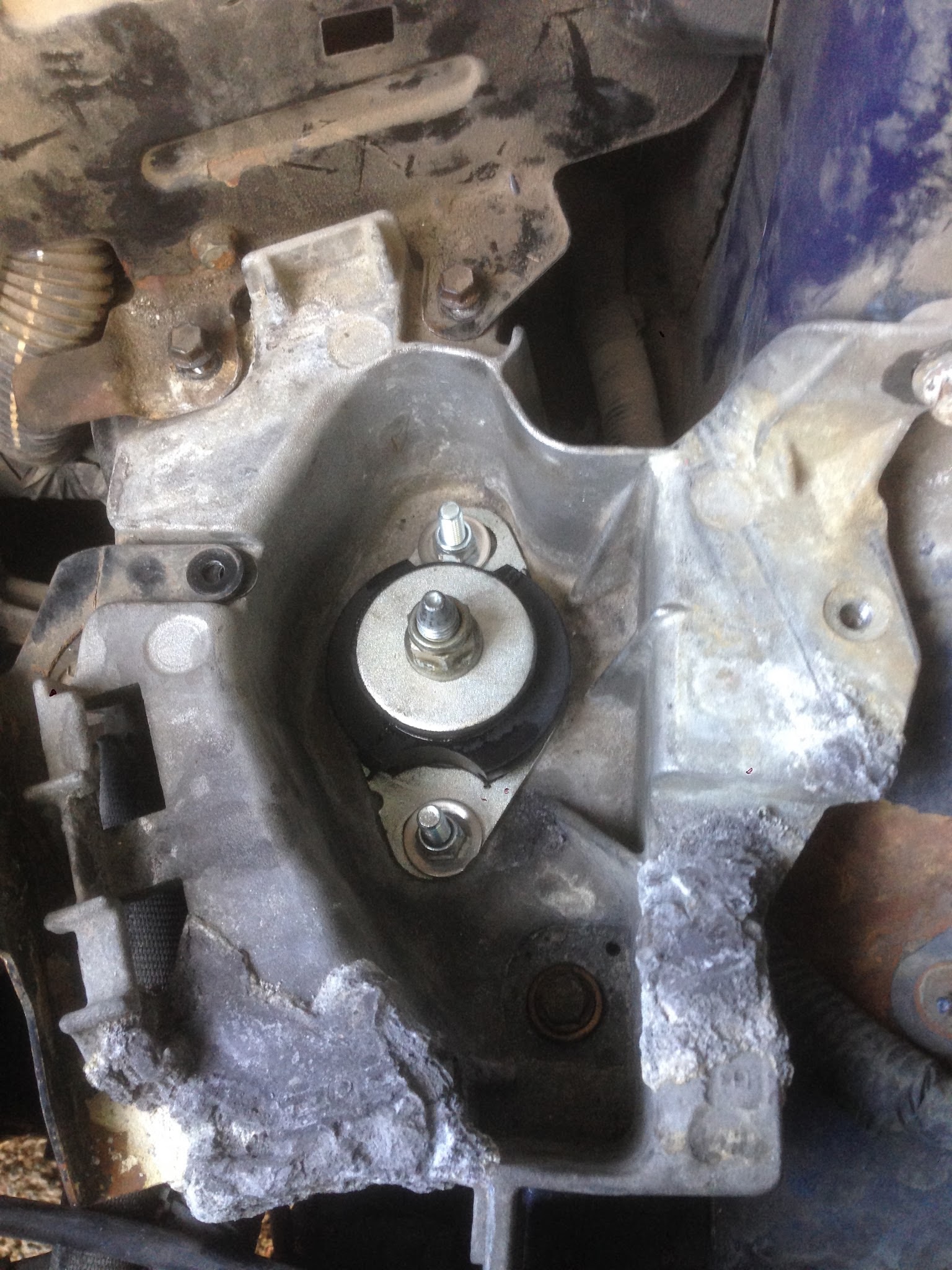 And the K&N induction kit 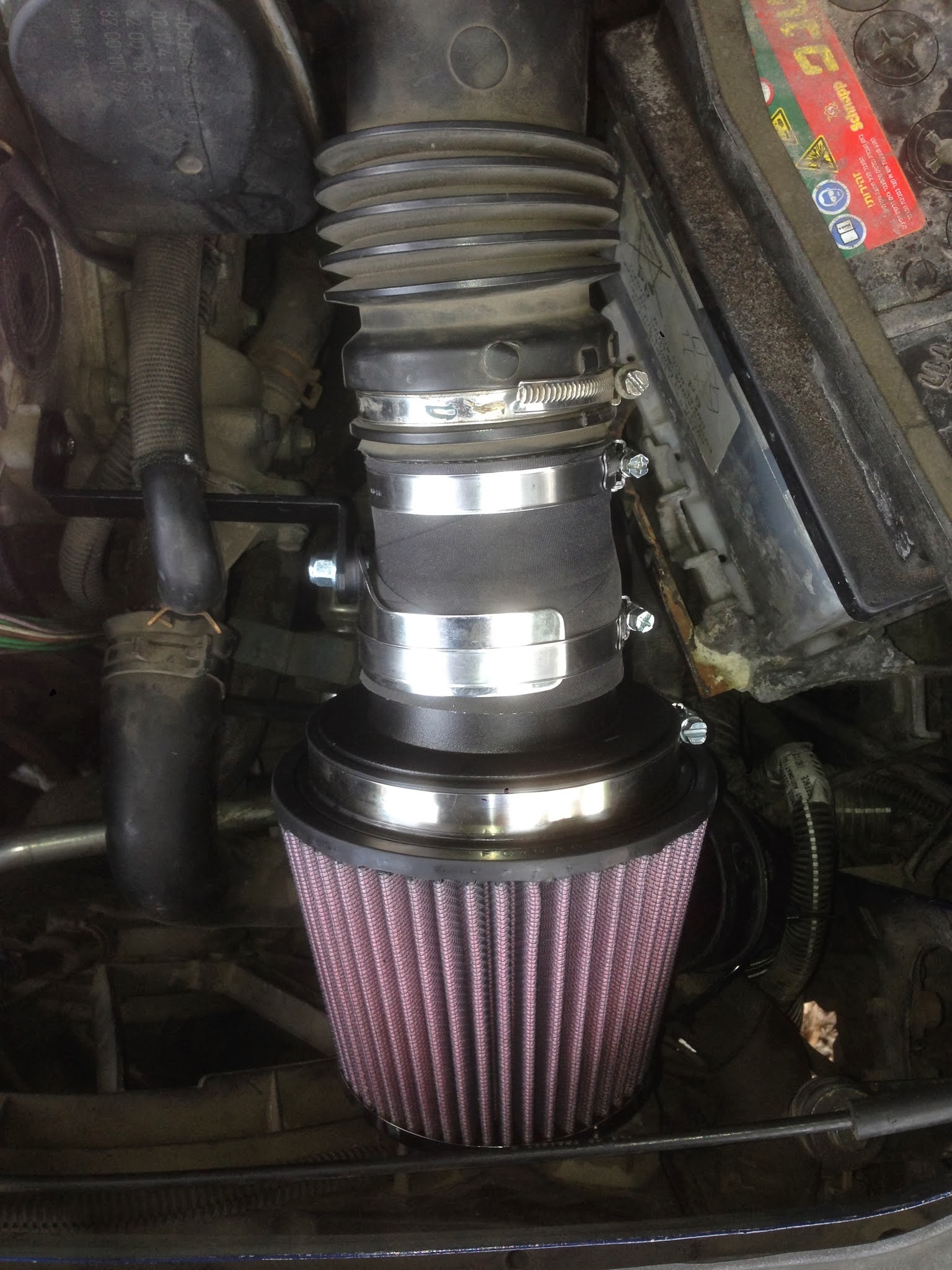 172 Ph.2
Next brilliant idea was to remap the ECU. After googling around (including this place as well) i've got myself a RSTuner software with STG1_RON98 map from Fastchip. Can't tell you the numbers since i've never took the car to the dyno, but the change was quite detectable. And pleasant.

ClioSport Club Member
Mk5 Golf GTI :)
Most will cry as to where you have put the induction kit due to heat?.

172 Ph.2
Yeah, i would expect that )
At the time there was no other option. I mean NOT putting it wasn't an option at all :laughing: (dat sound...)
"Spoiler alert" - there is plenty of space under the bonnet as of this week, and i will be taking care of it in the nearest future.

172 Ph.2
There were three annoying things i got from the previous owner:
1. ABS+service lights lighting up on 20m+ drives
This was caused by incorrectly calibrated brake switch and fixed in a jiffy.

2. Periodically the car would switch to limp mode.
Reading the ECU errors showed the culprit to be the worn out throttle pedal sensor. Gone after replacing the pedal.
God, i so wish i could convert to throttle bodies and ditch the drive-by-wire crap! Not in this country though.
Interestingly the new pedal i've bought was somehow completely different from the original one. Opposed to the original pedal which had, well, two levers (for the lack of better description) the new one was ordered from K-Tec and had just one lever connected directly to the sensor. This, in my opinion, is far better at least because the old one had serious play in the pedal movement. Not to mention that throttle response became much sharper. I believe the new one was actually for the 182, but i could be wrong.
However, new pedal position was much higher than the old one and took some getting used to. Let's just say that if you're under size 9-ish you'll either reach the pedal or the floor. My size 13 feels comfortable enough though :blush:

I don't have pictures of my own (yet), but just to be clear on the differences i'll attach the two i found online. This is the kind i had before: 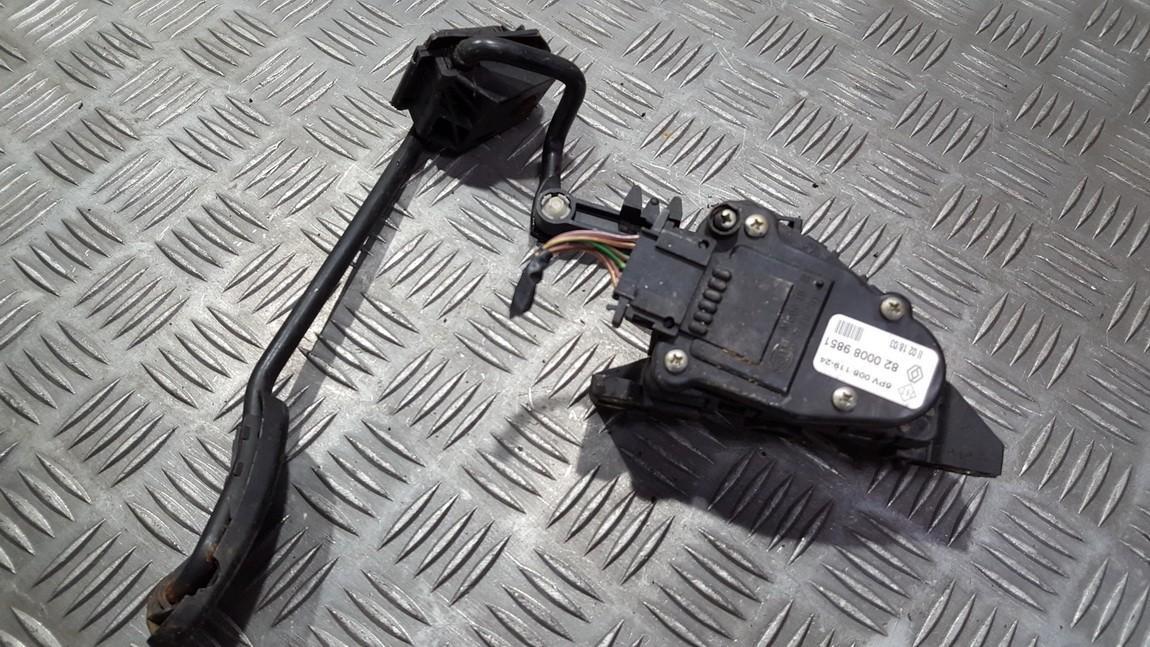 And this is what the new one looks like: 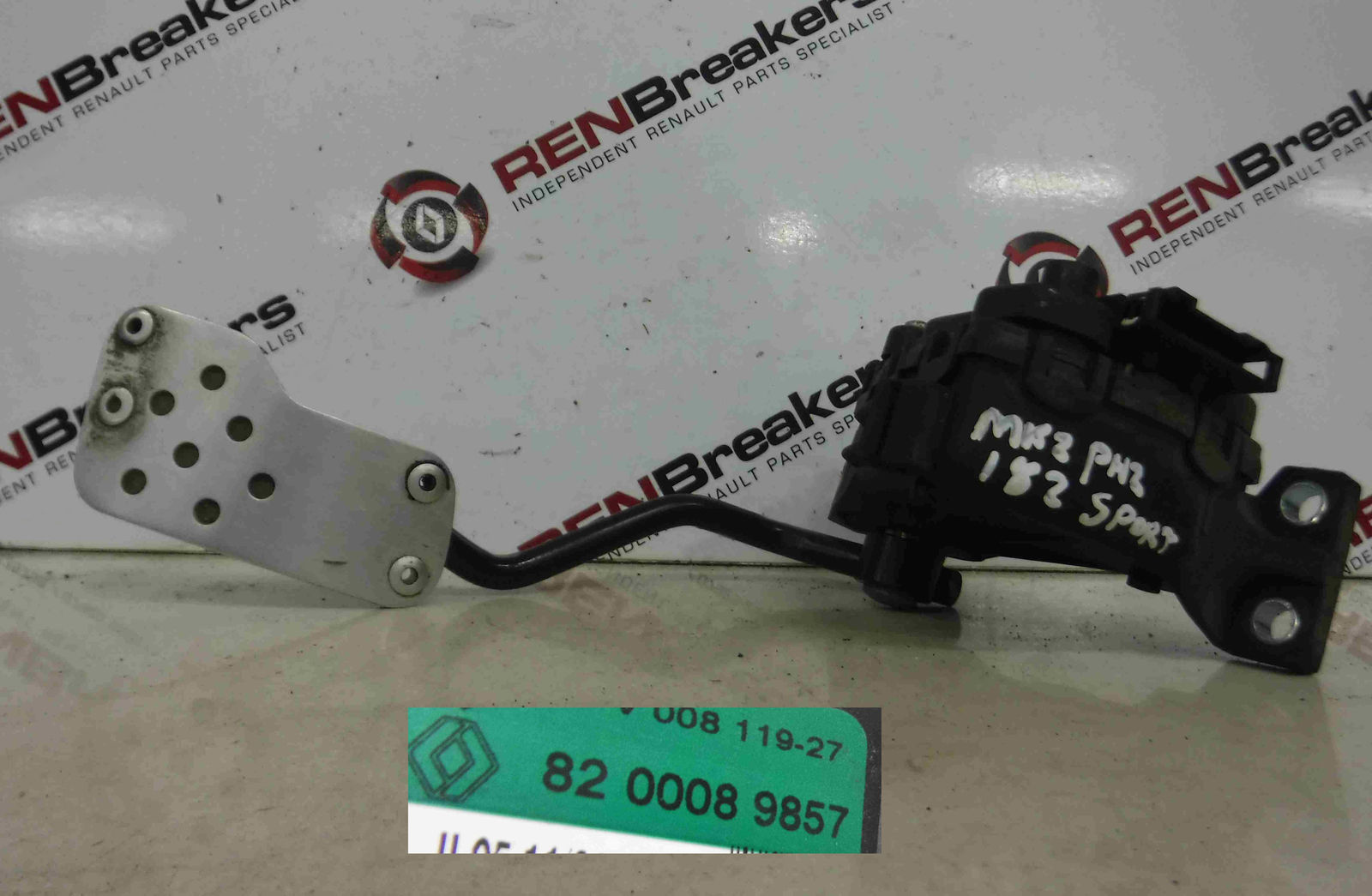 The general advice as i've seen it is usually to replace the pedal together with the throttle body, but i've decided to take things slow and one step at a time, which brings us to:

3. unstable idling RPM, sometimes going up to 4-5k
Googled again, smoked the forum, ate a ton of manuals. In the end, decided that the most probable cause would be the throttle body, especially as i've seen people say Renault ones are extremely sensitive to dirt. To prove that i've tried cleaning the valve with some degreaser and indeed it helped for a while (a month or so). Naturally the next best thing would be... replacing the throttle body? But that's not the way we do things ))
So instead i've cut the breather hose (i apologize if i get some names wrong, please feel free to correct me) - the one that goes the from cylinder head back to the intake hose - in half and put a small filter in the middle. It would still serve as a return pipe, but at least all the dirt and oil would stay out of the throttle body. That solved the problem for about 3 years, until recently i had to replace the entire intake hose after the aluminum filter body broke. The new hose from Stoney Racing is a unibody and i guess causes the same issue.
Though right now i'm actually considering replacing the throttle body as well as adding the filter again. It has done 4 years with me and god knows how much with the previous owners.

172 Ph.2
Brakes replacement
Some time in July 2014 decided on a brakes upgrade. Ordered the KTR Tracksport read brake discs, Brembo Max grooved front discs, and Ferodo DS2500 pads all around. Regretfully, local MOT did not allow the customs to release the brake pads so instead i had to do with the OEM pads from the local dealership. Can't recall what exactly were those, though "crap" would describe them pretty accurately. Especially compared to the recently installed to Brembo pads - nothing fancy, also OEM, but completely different feel and a serious bite.

P.S. Also painted the calipers for fun. Lasted for a month or so :smile:

172 Ph.2
So, i got bored another day...
I should've started every post with that phrase. How didn't i think of this earlier? Anyway...
I'm finally getting to recent history.

(Mostly) suspension upgrade
After replacing the brake pads with something more serious it was time to play with the suspension and overall handling.
All done over two weekends, first the front and then the rear. The bottom anti-roll bar was a bit time consuming - you have to drop the rear axle in order to fit it due to the bolts orientation, but otherwise everything was plain and simple.
I did not fit the gear linkage, though. It requires a lift or some kind of ramp which i do not have access to, so i gave up and entrusted the job to a local workshop. Which almost botched the fitting - the reverse gear would not lock itself in a position at first.
I don't usually take pictures in a middle of a work, so there are no pics of front suspension replacement, but there are couple of the rear and of the result.

Bilsteins were chosen because they are sold here as well, (but would almost cost twice as much), and because the intention was not to have the ultimate track day car, but stiffen the ride. Yes, B14 does not let you control neither the stiffness nor the rebound, but from what i've gathered it would be a good replacement for the stock suspension, firm enough to make a difference, but soft enough to use everyday. As it turned out - i got exactly what i wanted - a perfect match to my expectations and driving style and couldn't be happier. I've set the ride height before installing the springs - compared them side-by-side to the original springs, set to what seemed to be 3.5-4 cm lower position and dialled back a turn and a half on the driver's side (added some height to compensate for my weight). After everything settled down the ride height was exactly as i hoped it would be - lower, but not ridiculously low and almost (just a hair away but still not) scratching the wheel arches on the steepest of turns. I've never measured the precise numbers, but added that to the "To Do" list.

The gear linkage kit also serves its purpose. I'm not sure who designed the seating position, but sometimes i get the feeling they were not entirely human. BTW, i had the same sensation in my late Alfa 145. Distance to the pedals, steering wheel and 5th gear position (i'm talking about left-hand drive) just doesn't feel right. That kit fixes it all and brings the handle up to the steering wheel, turning gear shifting into one short smooth motion. Switching a turn indicator is now a bigger hassle than that.

The car is so much stiffer it feels like an giant go-kart. There is even a hint of an oversteer sometimes which itself is a new feeling for someone used to a normal front wheel drive behaviour. Of course, the payoff is that you now know every bump you pass on the road and sometimes while accelerating over them you can feel the front wheels skipping, but IMHO it is SO MUCH FUN! :hearteyes:
It's childish, i know, but i can't help it - almost any drive now feels like a mini rally course. All in all this is by far the best thing i've done so far to enhance the driving experience.

P.S. I don't know why i'm explaining all this, you guys with your projects are so amazing and so experienced this must feel like a child's talk... Truth be told that's not far from the truth, i guess i never really grew up )
Last edited: Mar 6, 2018
You must log in or register to reply here.