RS Clio 182
It's been a long time but I thought I'd update on a build I've been very slowly working on for 2 years now.
Bought a high mileage 182 two years ago with a "mate" with the intention of running it in rallycross. After we stripped the disgusting interior and skipped it, he pulled out, leaving me with a worthless, interiorless car.
Over the last two years I've been slowly restoring and updating it with a view to now running it as a weekend/trackday car.

That is essentially the recent progress, probably a few things I've forgotten.

Pics to follow separately to avoid losing this enormous lump of text should something go wrong. 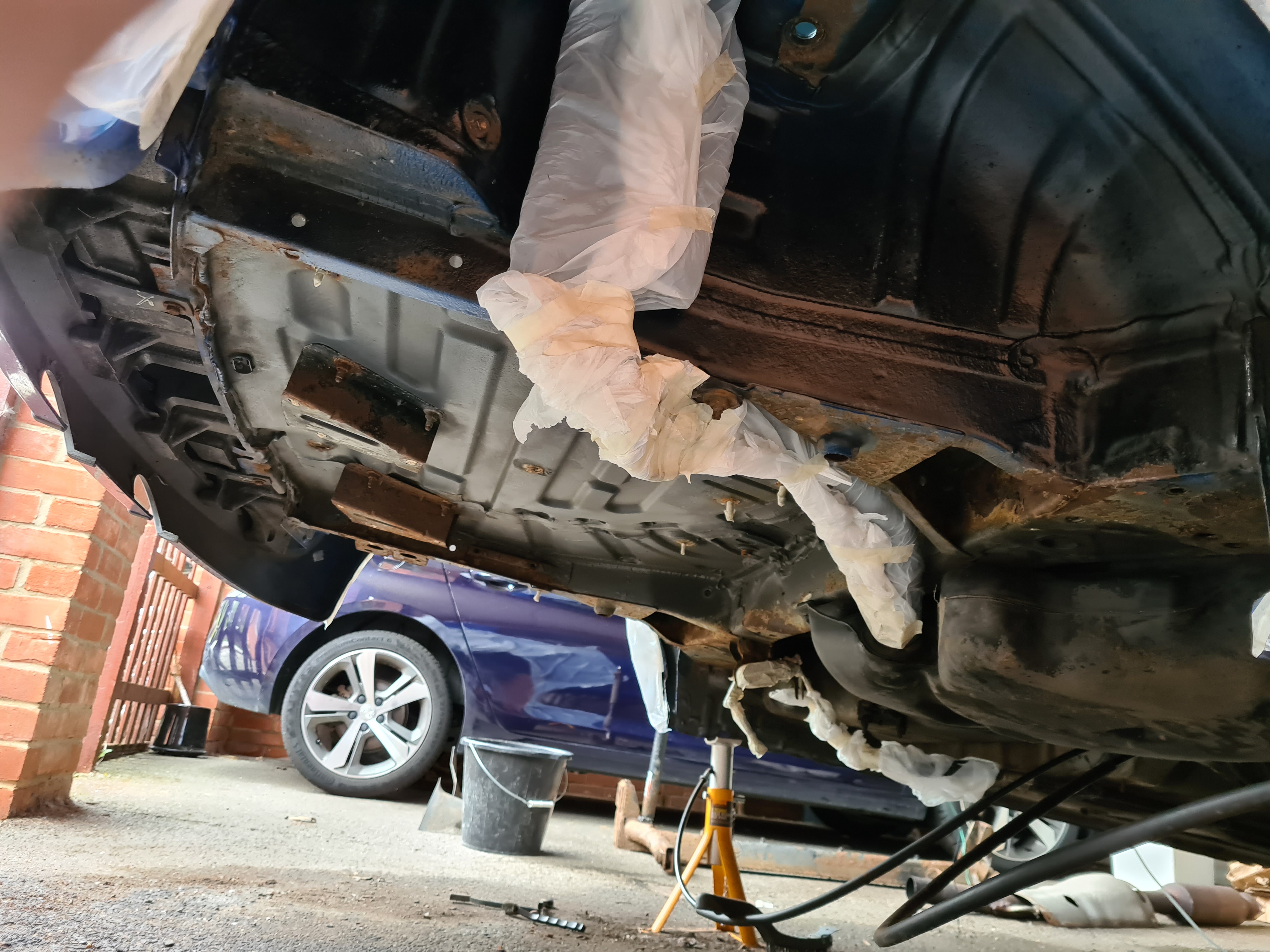 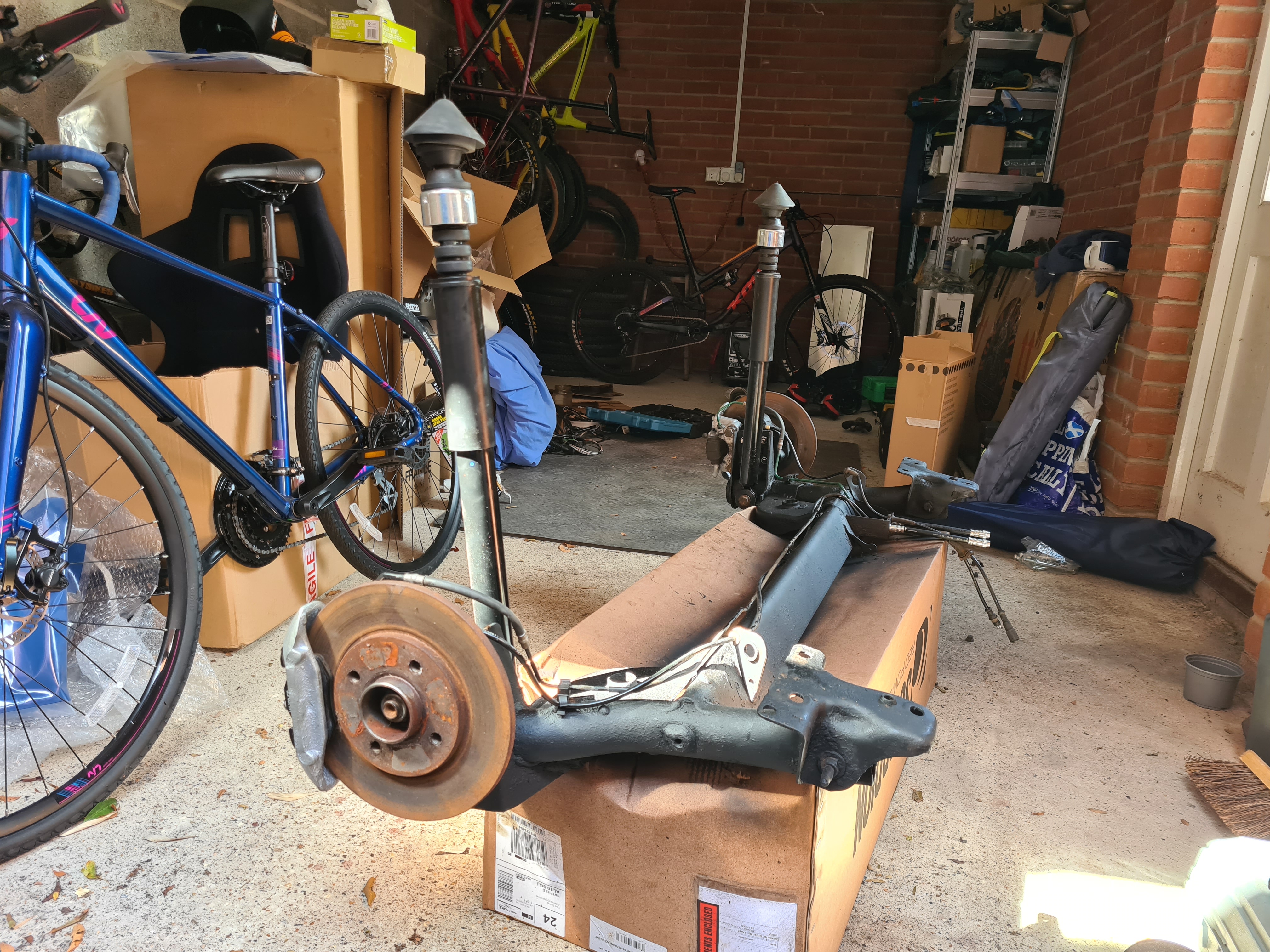 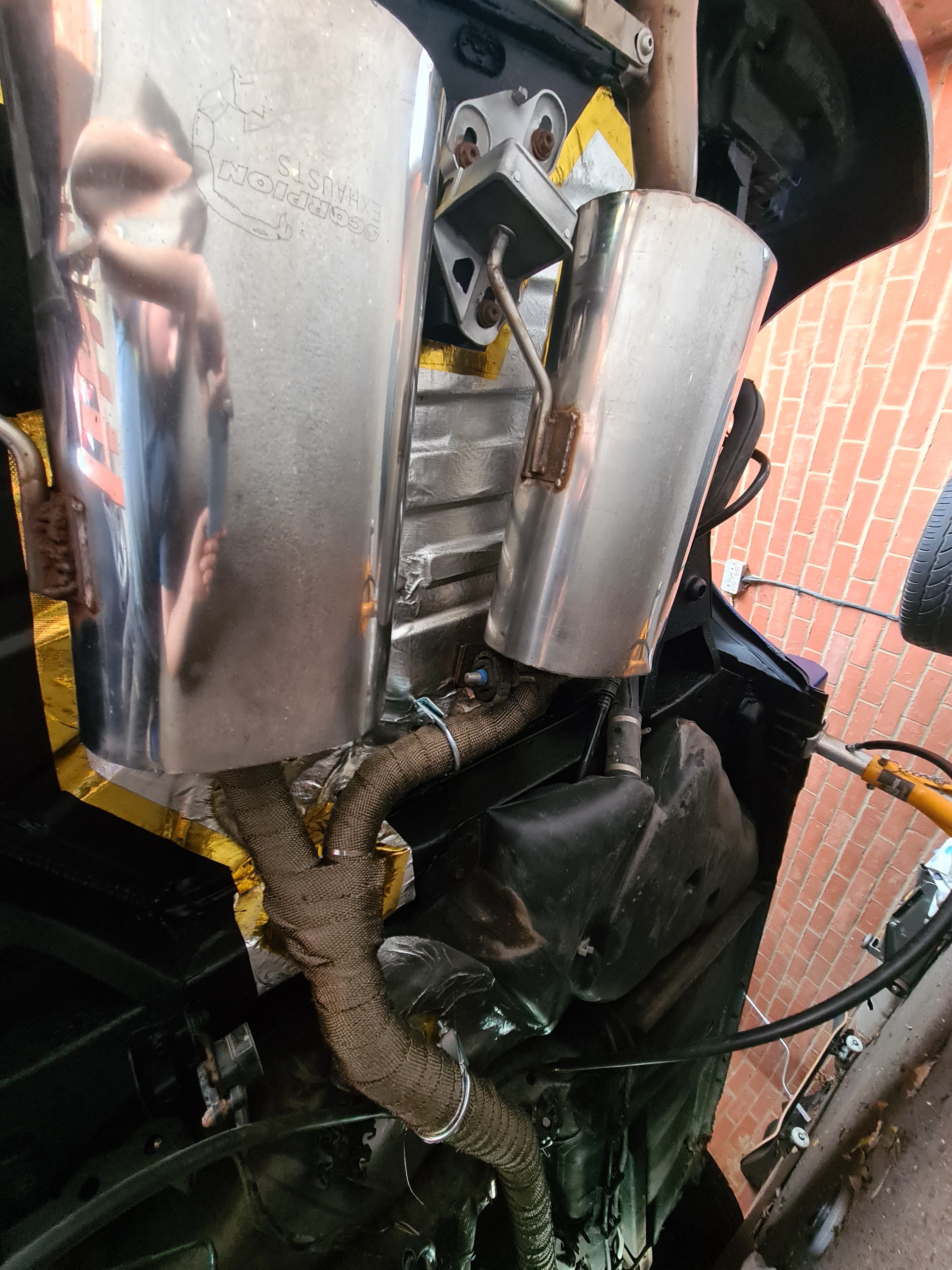 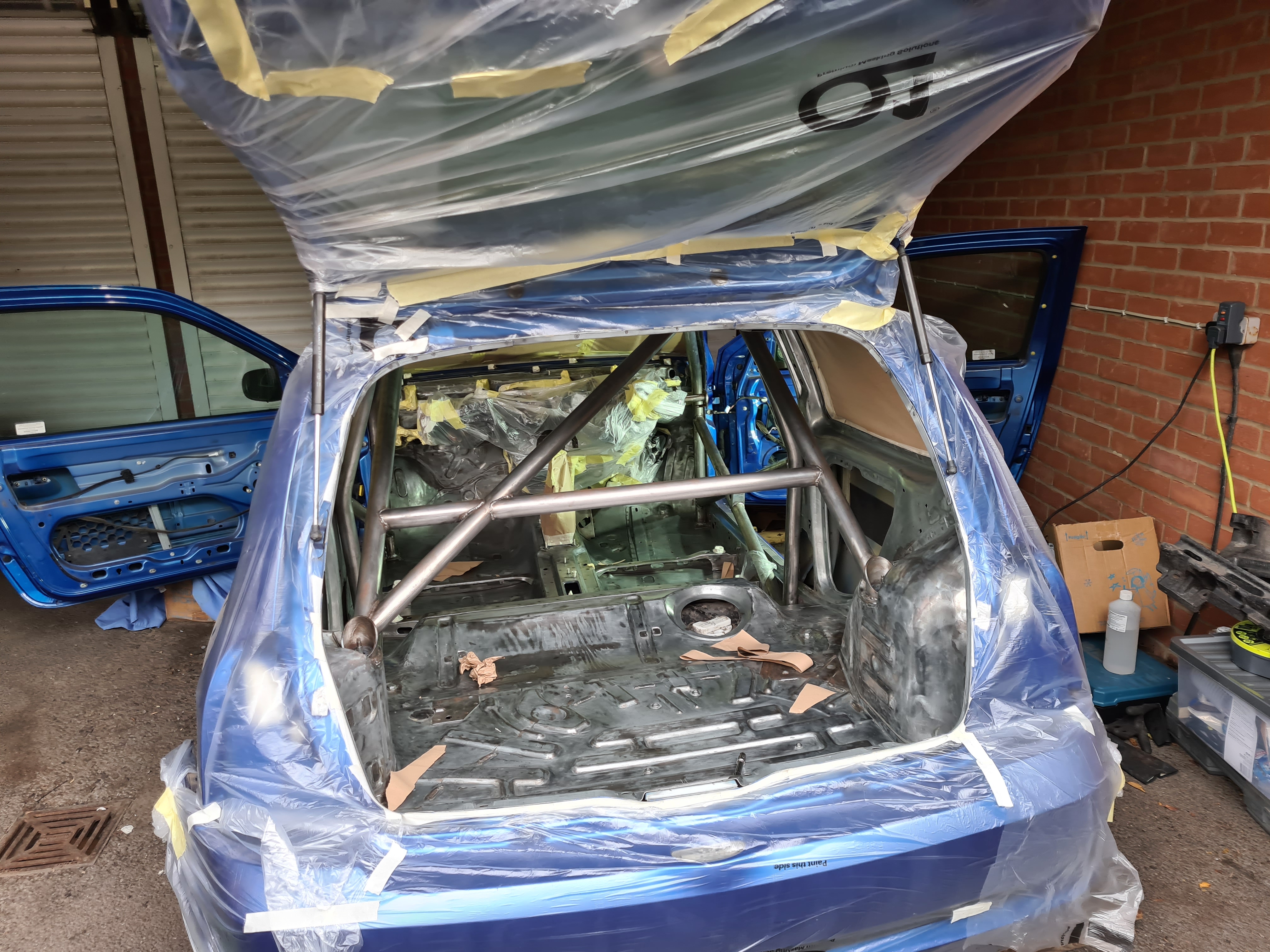 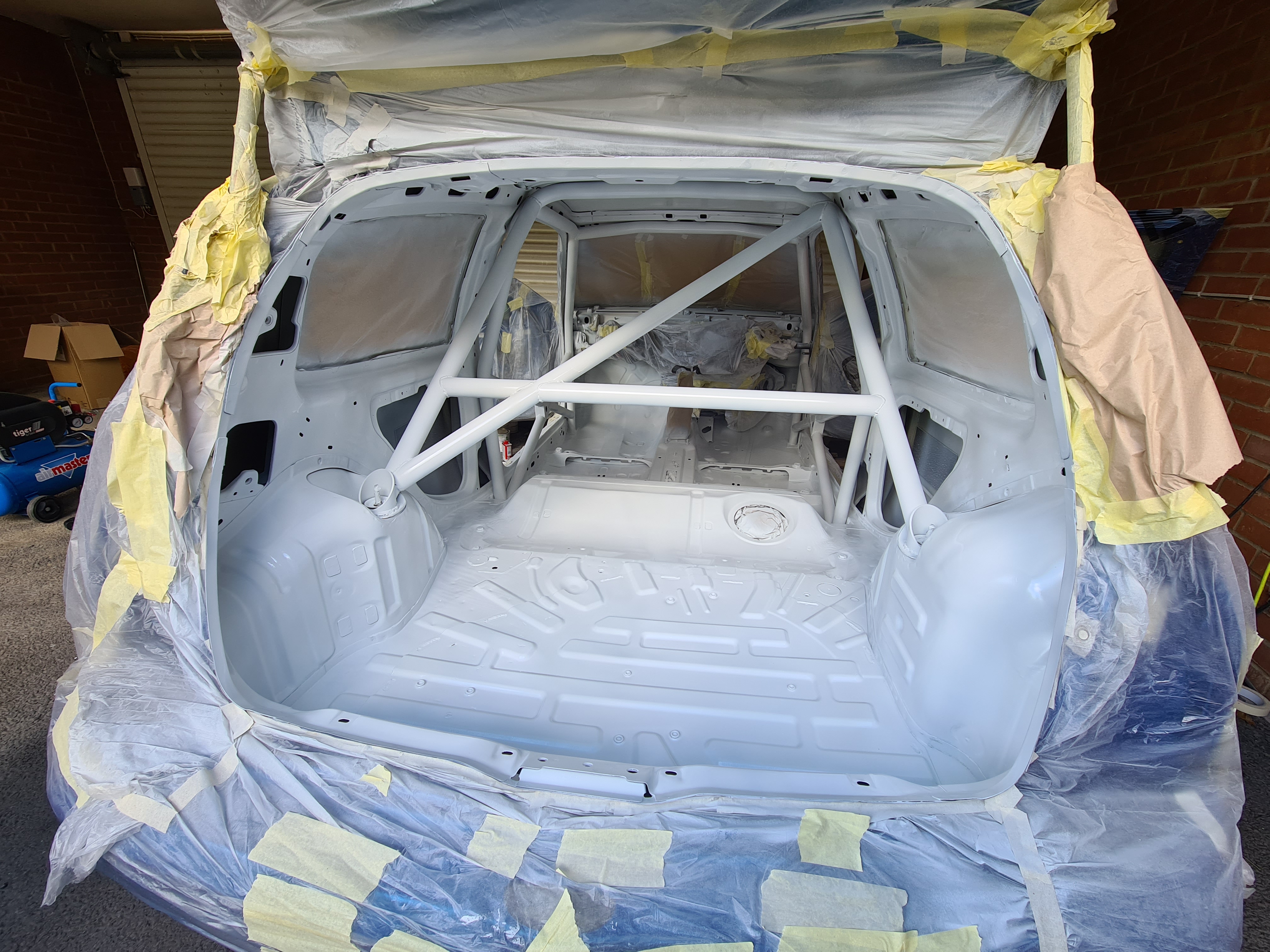 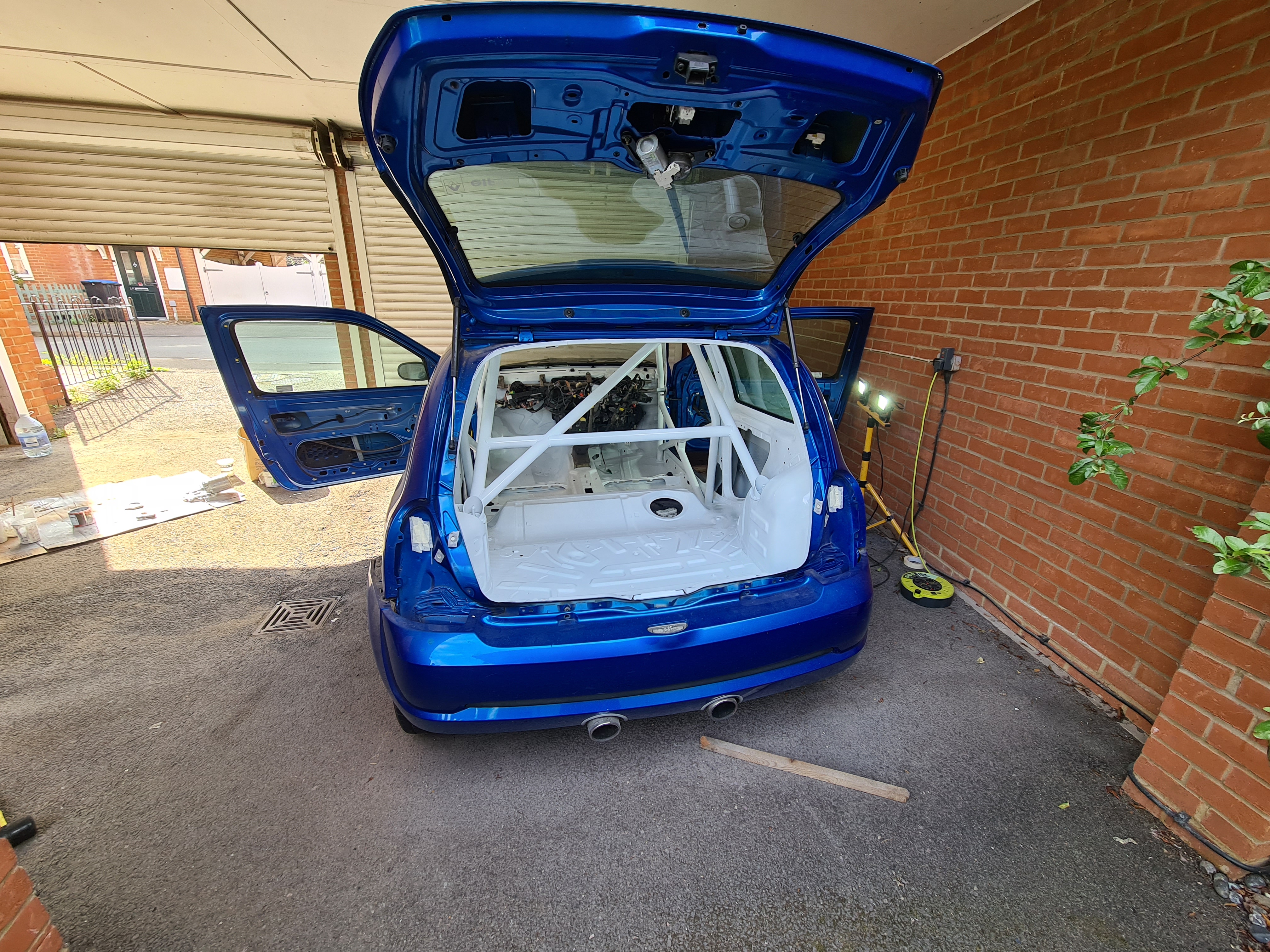 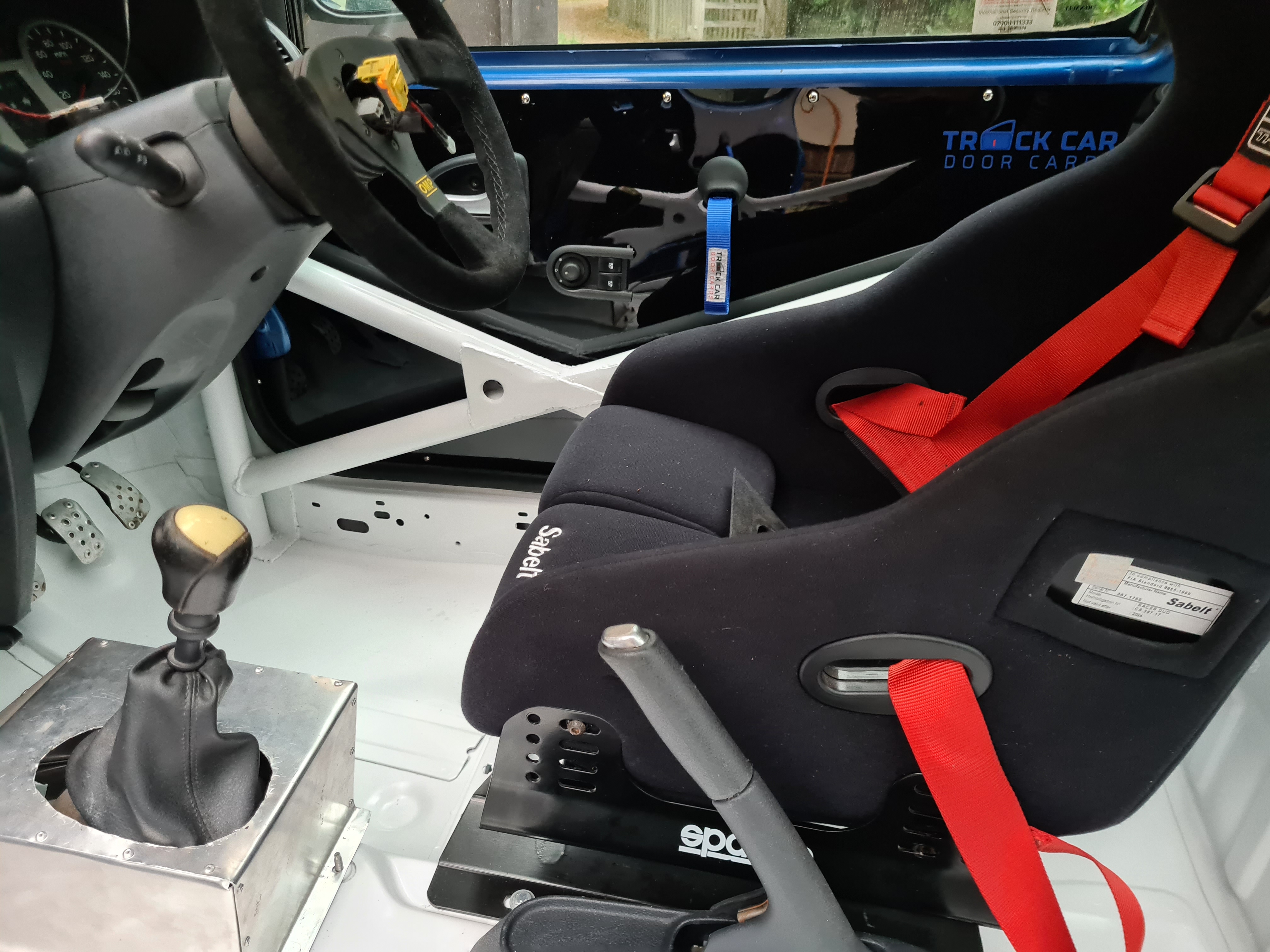 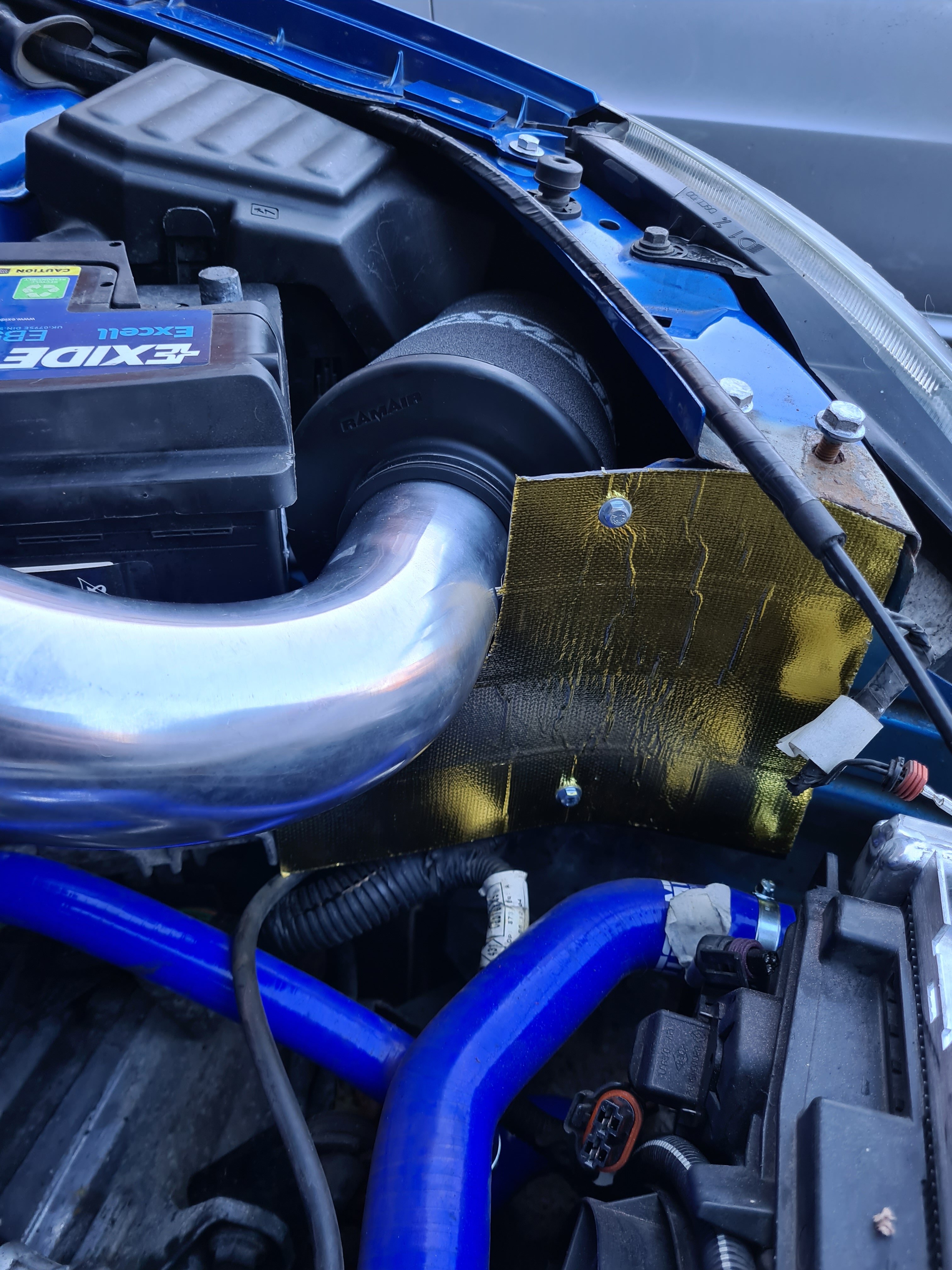 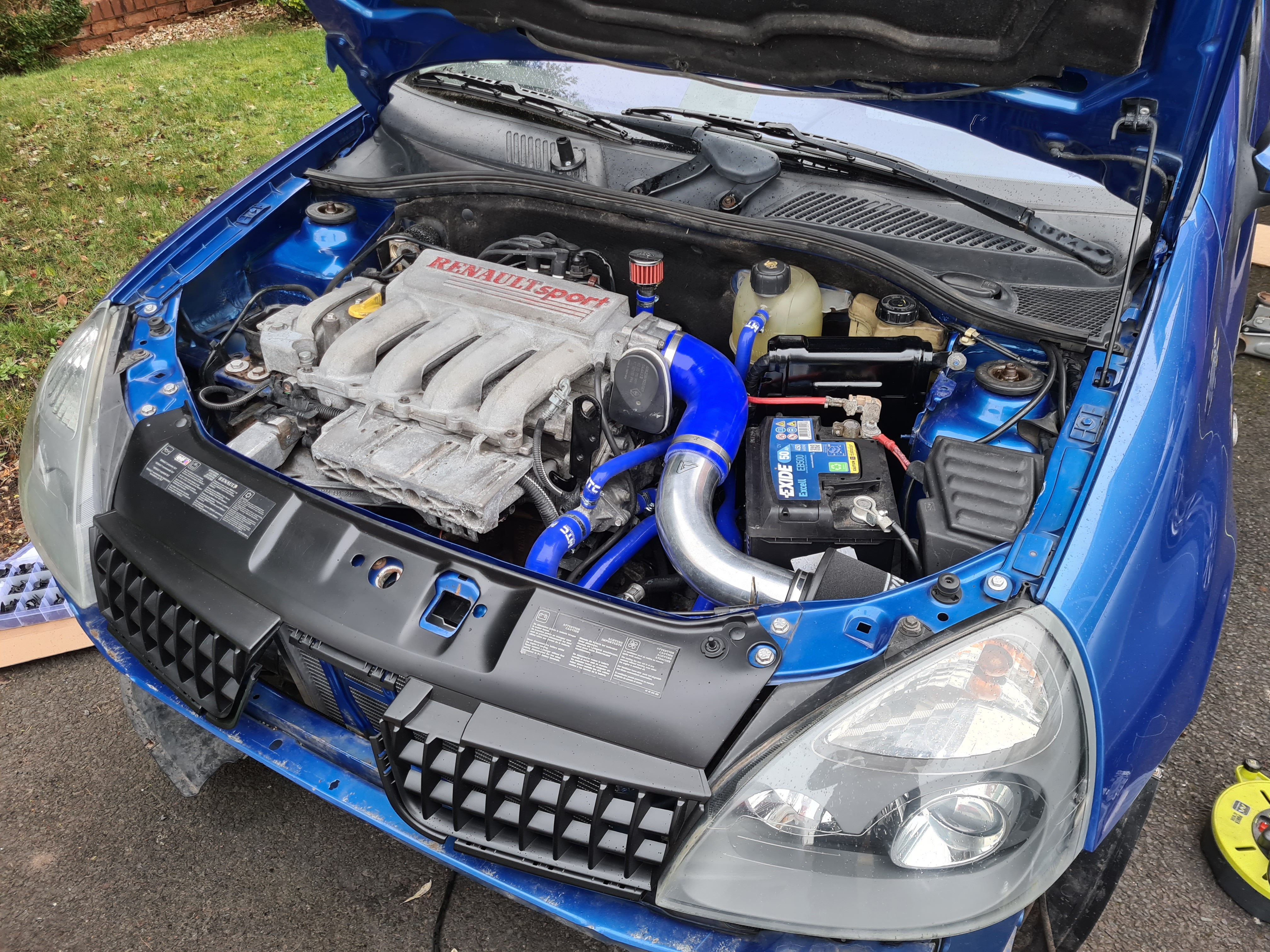 ClioSport Trader
need BRAKES? PM me
Looks a decent project, plenty track and race cars running oe brake set up with some suitable pad compounds , decent fluid and brake cooling from the front fogs. I can you sorted with the brakes and other parts , clutches , Powerflex and oe bushes etc. Send me a PM if want any info/help

RS Clio 182
Many thanks chaps. George, will likely be on touch sooner or later. I fancy the Wilwoods because shiny, but I haven't driven the car at all stripped out and there's every chance that with an overhaul on OEM brakes it'll work great as you say.

Today's developments:
- Wasted a lot of time trying to get the OBD reader to communicate - no dice.
- Wasted an equal amount of time fiddling around with airbag resistors trying to get rid of the light, also to no avail.
- pulled out non-working hig level brake light. Not hard to see why this doesn't work. Anyone selling them seems to want £40 so I'm gonna get some cheap LED strips and see if I can bodge it myself- pulled out brake pedal switch and adjusted it a bit, seems to have cured ESP warning light
- used a piece of string to verify that PAS pump is the source of the whine under steering load. Will order new one and cry at having to take the aux belt I put on last week back off again
- confirmation my new OEM rear calipers will be delivered tomorrow
- confirmation K-Tec finally have all my parts and will dispatch this week. New suspension soon, woohoo! 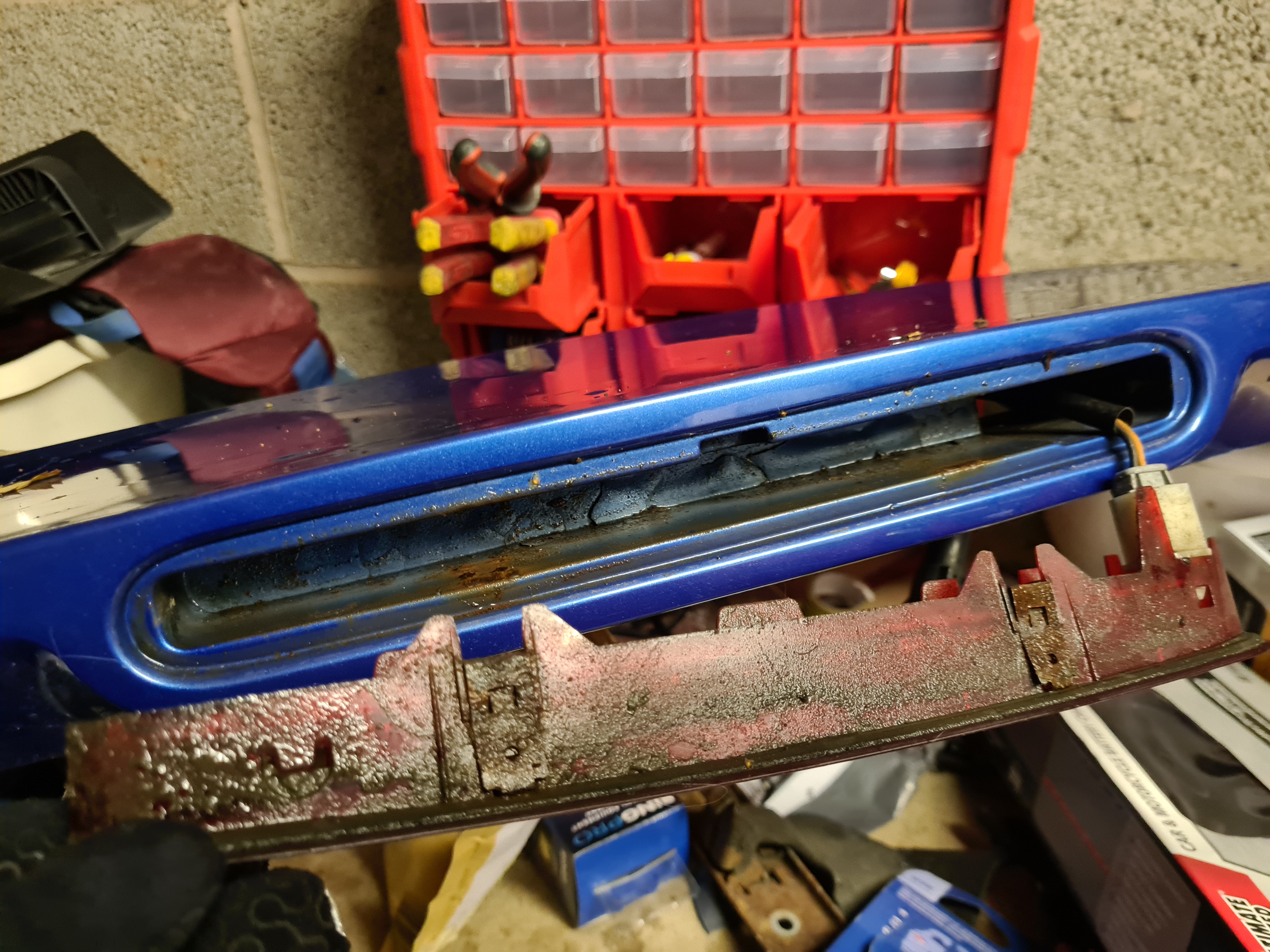 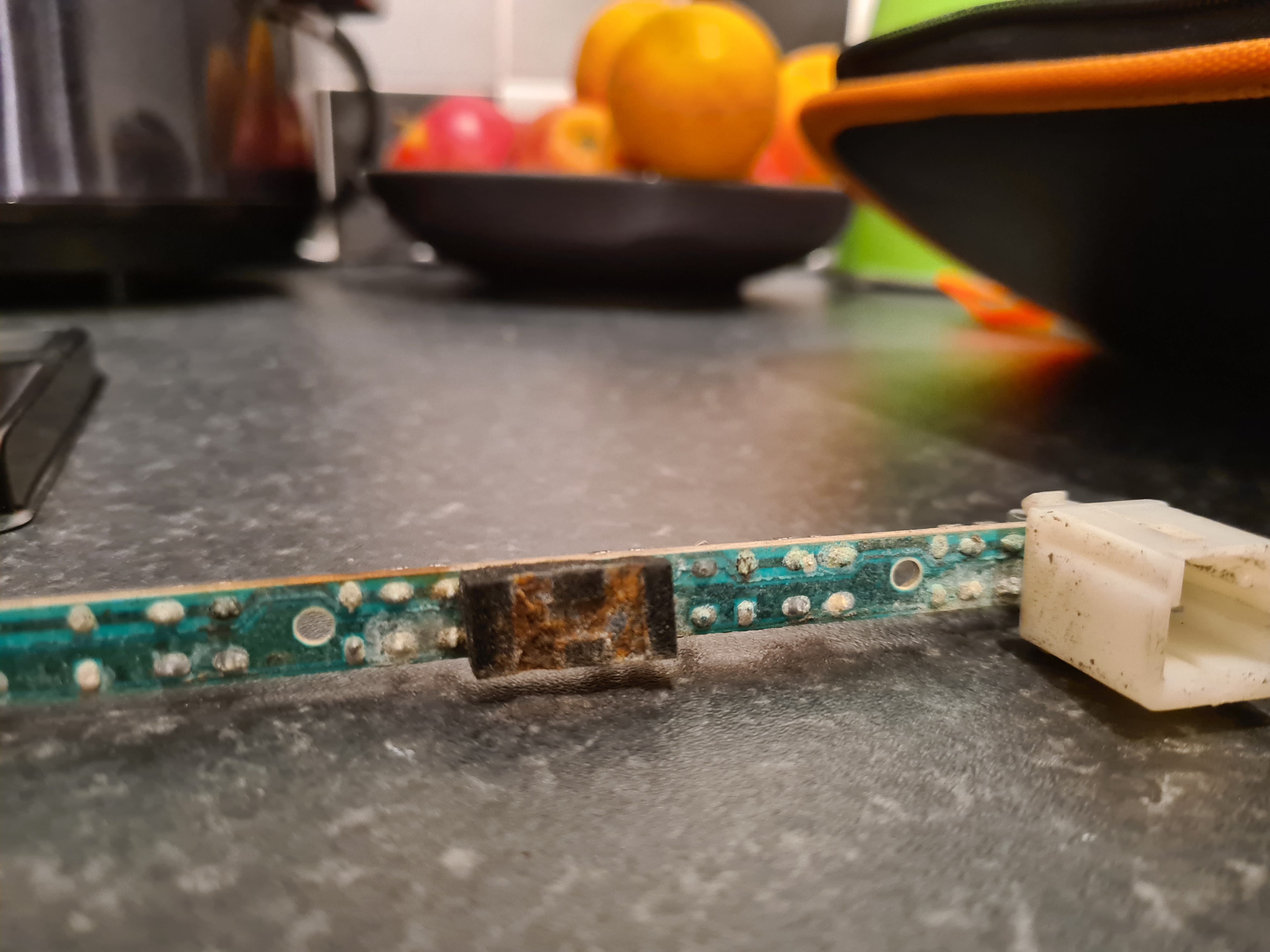 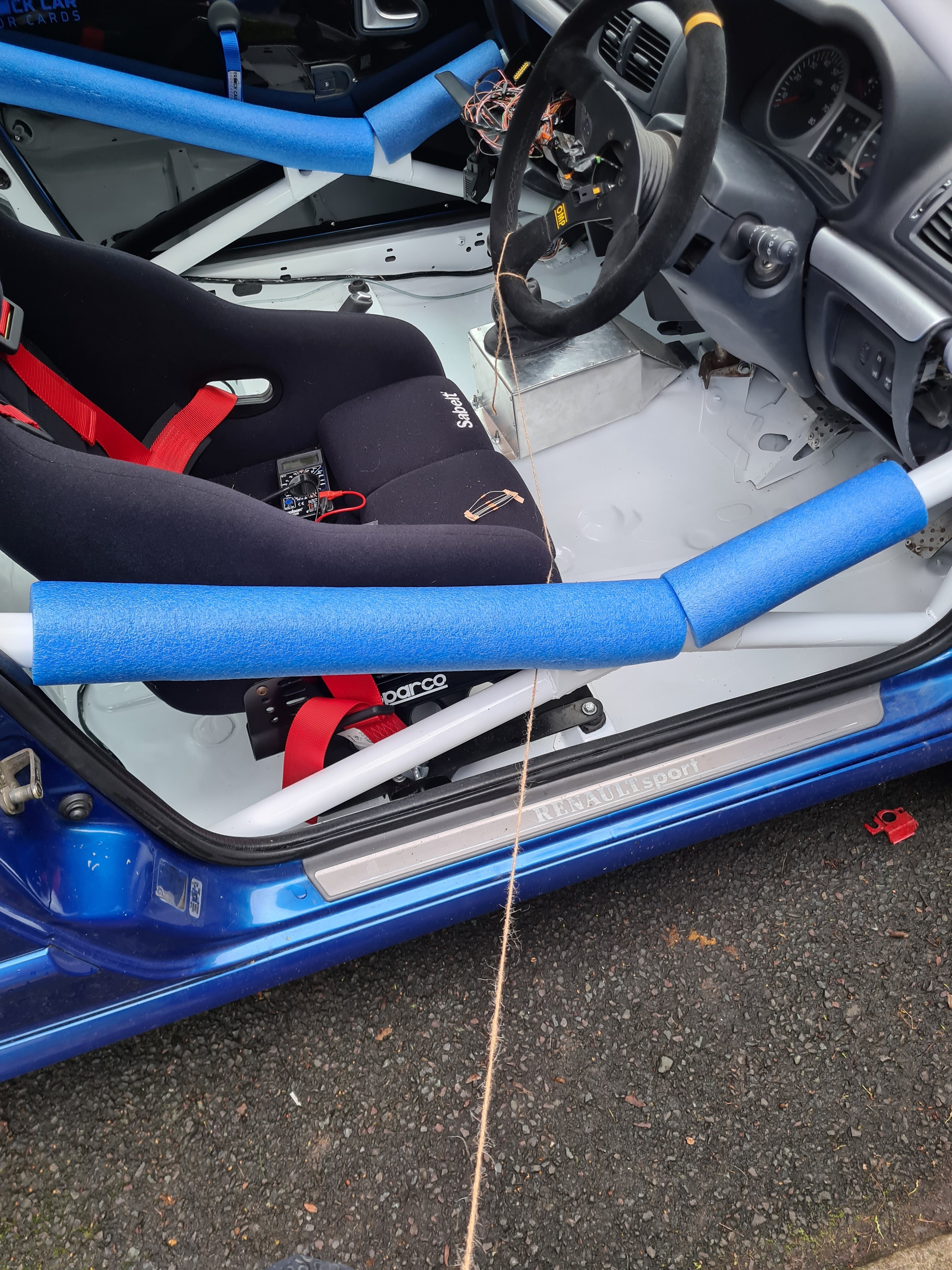 RS Clio 182
Mini update.
I got bored today and decided to quit messing around with airbags and put the horn in to tidy things up. Blob of solder on each contact for a better fit and some tape to keep it in, easy. Cannot overstate what a difference to morale that tidier wheel makes. 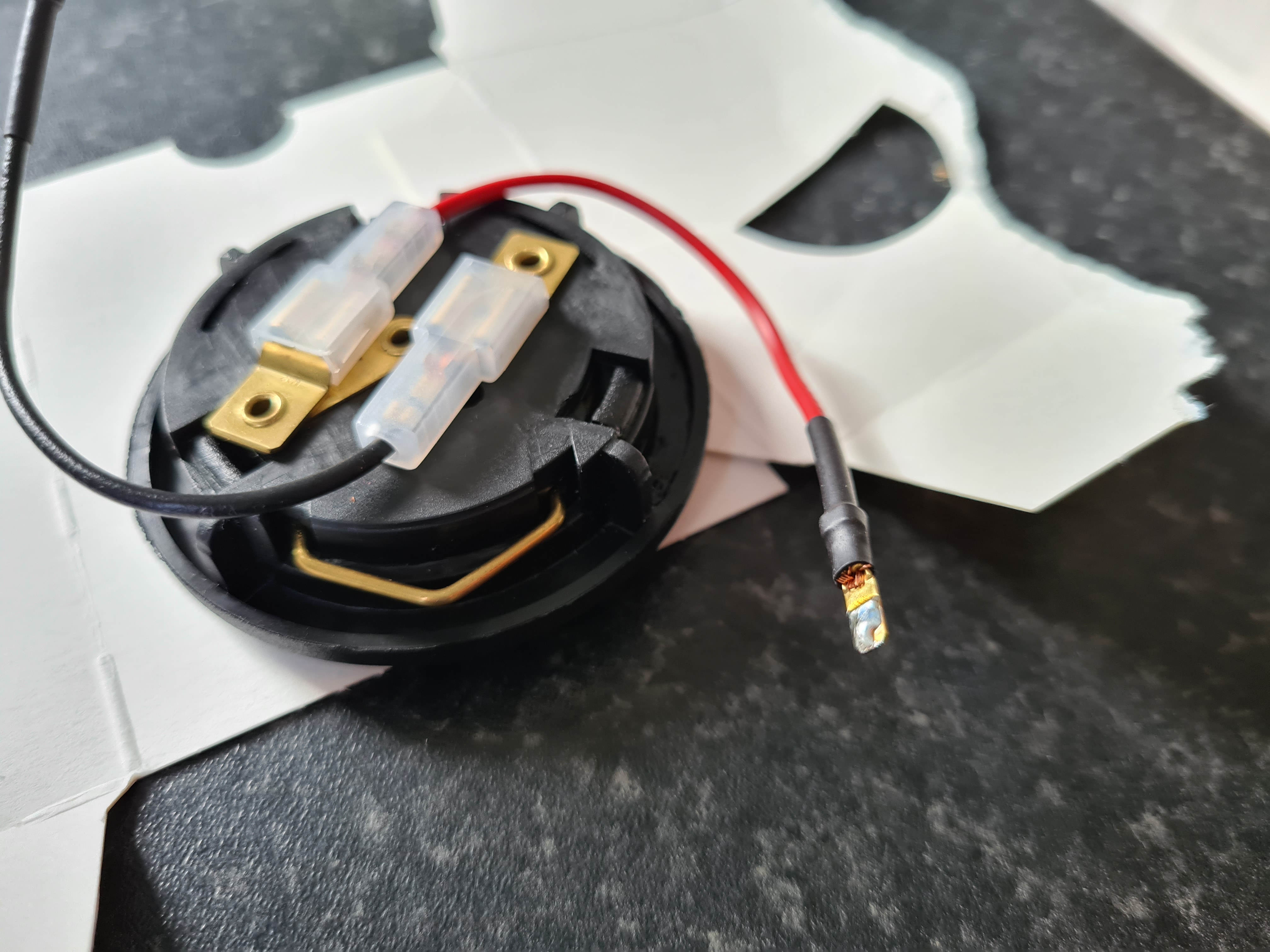 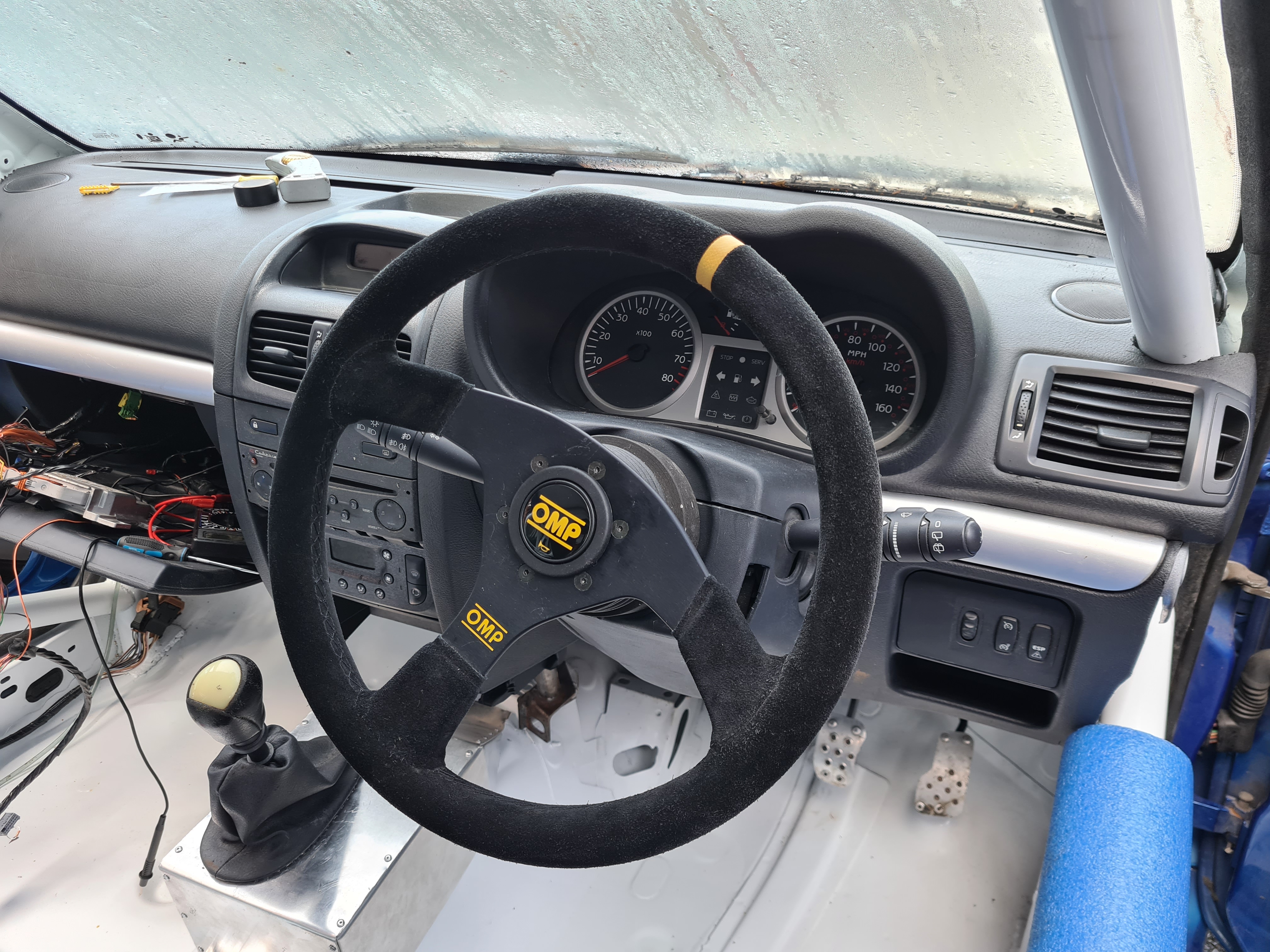 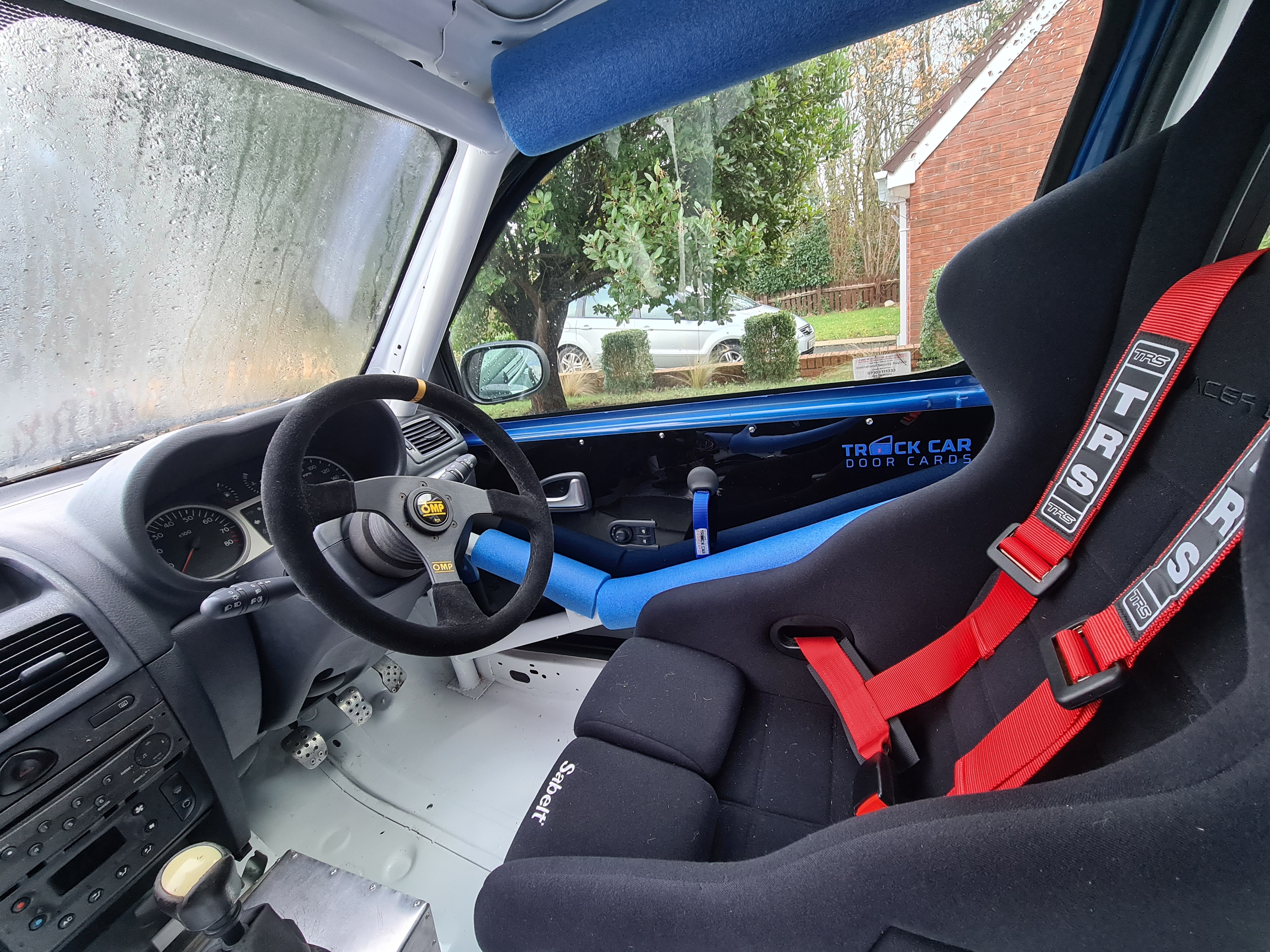 New rear calipers arrived today so decided to swap them in over lunch. For once, a job on the Clio was a dream. No problems whatsoever, whipped the old calipers of and had the new ones on in under 40 minutes, super pleased with that. They need a full bleed and the handbrake cable adjusting but they sit well. Only potential issue is they float too freely so I worry they might rattle, but that's a problem for another day. Very easy job with minimal tools needed. Please excuse the rotten springs, new ones in soon. 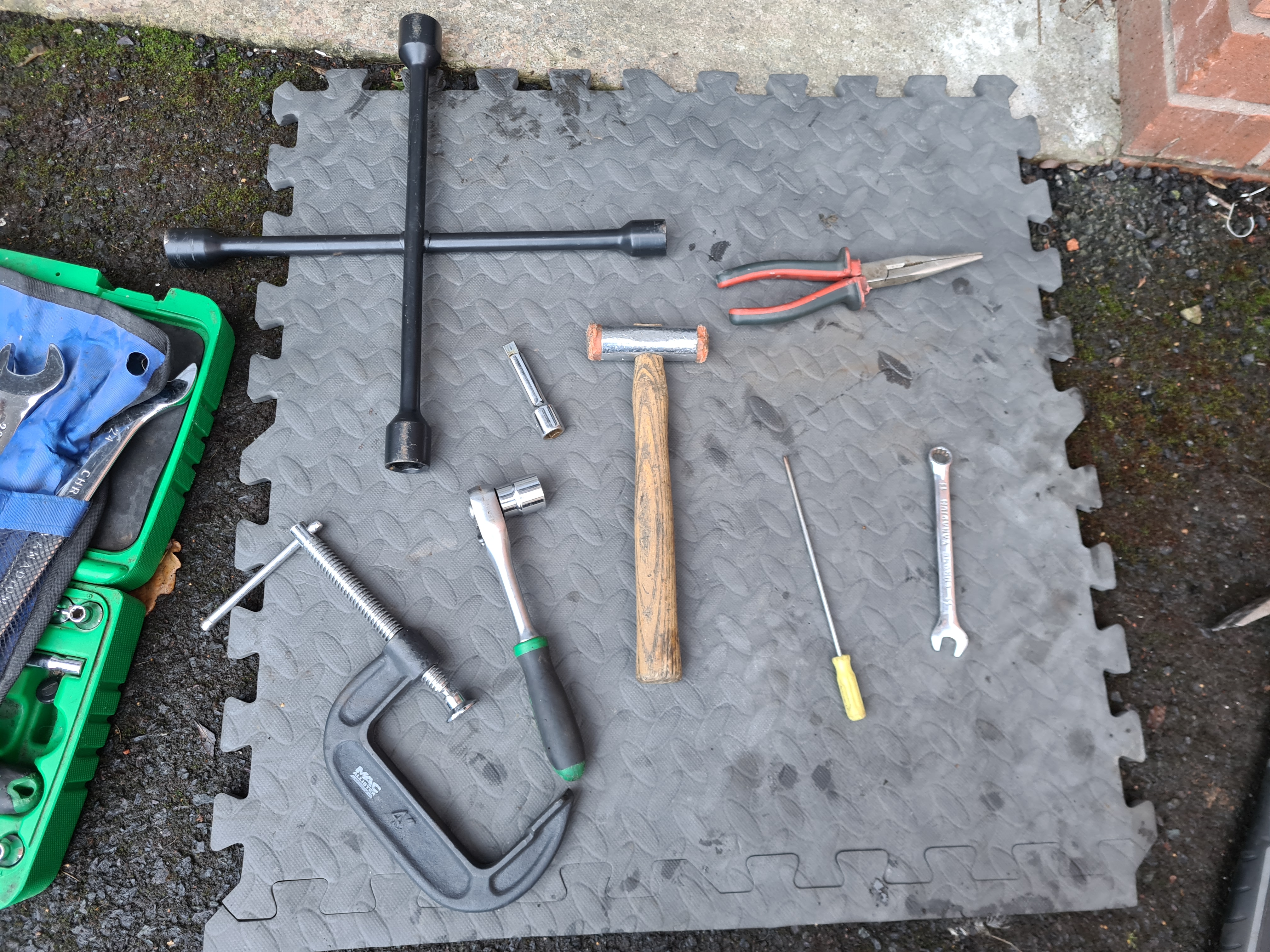 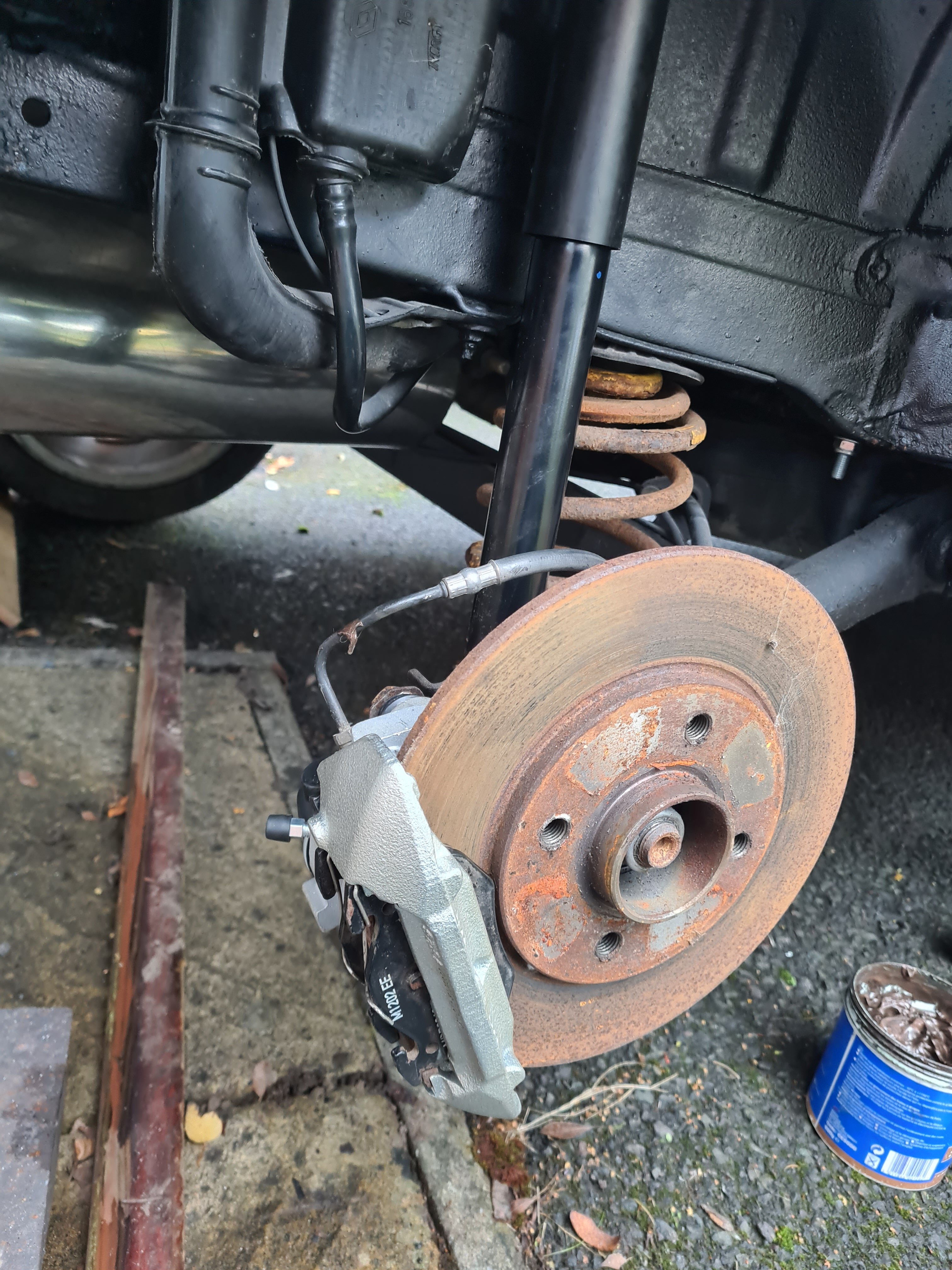 Ordered a new PAS pump last night along with some cheap LEDs for the rear high level and also a second hand airbag module to try out. Tried to bodge the OBD port but no dice on that one.
More good news that my suspension should be here in a few days and all being well I should collect the new splitter and rear cards tomorrow or Saturday.

Tell me about it. The years...they have not been kind to this car. In the last two years it has covered <1 mile in total - a shakedown after it first started after injectors, battery and starter problems fixed.
The good news though is that, at the rate I'm now going, sooner or later there isn't going to be any of the original car left

ClioSport Club Member
182 FF RB
I’ve had my 182 BG daily 4yrs now and trust me it was far worse than yours. But with a lot of TLC and wonga, they can all be rescued. 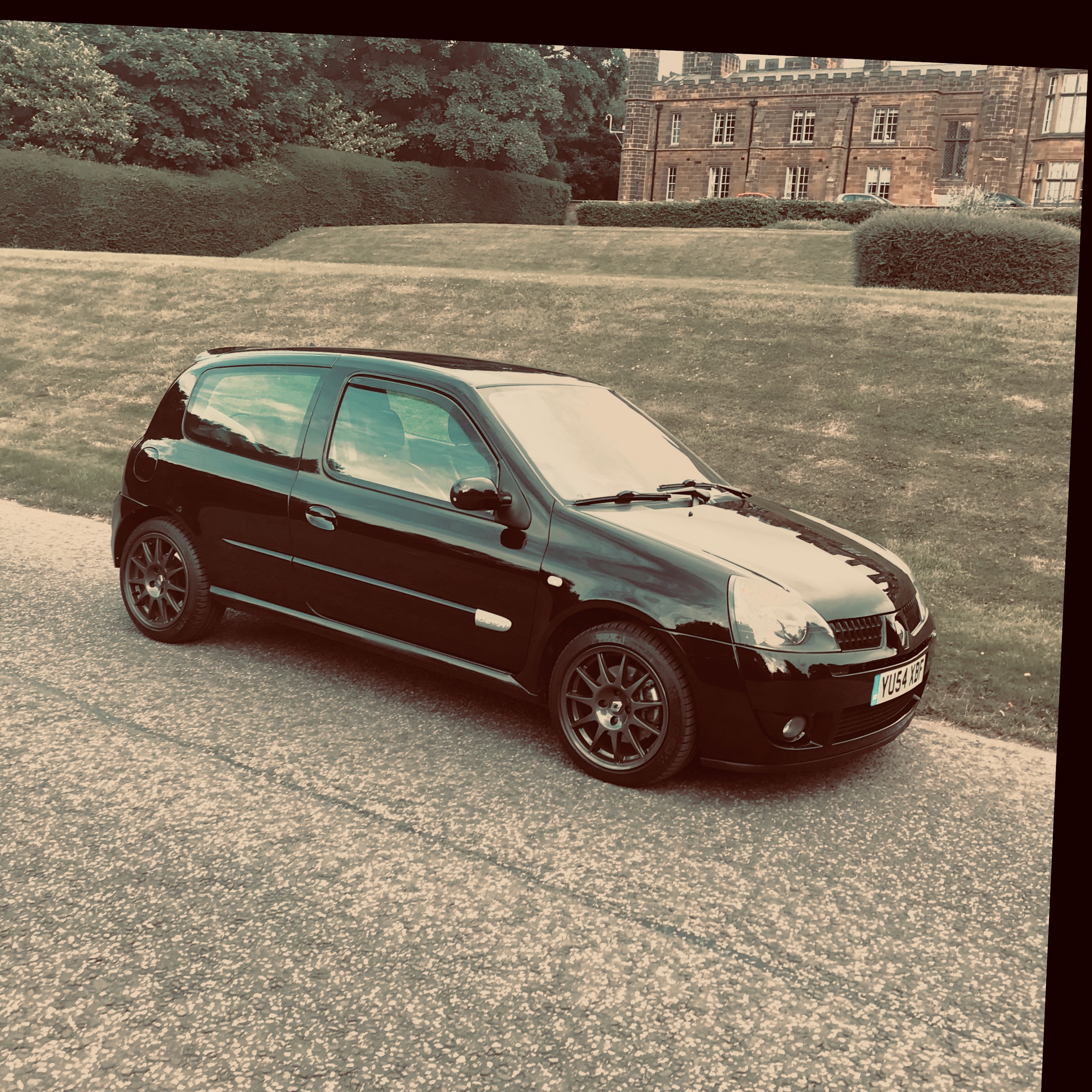 Jon Wright said:
I’ve had my 182 BG daily 4yrs now and trust me it was far worse than yours. But with a lot of TLC and wonga, they can all be rescued.
Click to expand...

Definitely agree. On the face of it, mine looked very scrappy and there are some problem areas for sure, but more and more of it is coming apart and going back together in a convincing manner so things are looking up, Definitely nowhere near as disheartening as the shock bolt shearing right at the beginning.

Weekend update.
Friday; drove down to Bristol for a party and picked up my new aggro splitter from Simon at Track Car Aero on the way, as well as some white rear cards. Looks like a great piece of kit and very grateful to him for being so accommodating with all my stupid questions and requests.

Saturday; drove home and spent the day feeling hungover, started piecing together the splitter before realising I don't have any instructions. Gave up. Came home to a bunch of packages ready for Sunday.

Sunday; cracked on in earnest. Pulled apart the non-functioning rear brake light and determined re-animating the board was not going to happen so made my own with £2 worth of eBay adhesive LED strips. Started by just squashing the flying leads into the terminals of the connector and a dry run with that; LEDs lit up. Soldered in two strips in parallel to the leads of the old connector after cutting it off; also worked. Assembled in housing and re-routed wires, taped down; all working brilliantly. I've never been any good at soldering or electrics so very pleased this all came together. No photo from the back all pieced together yet as other half wasn't here. The scraps of wire I used to lengthen the leads are too thin so will need replacing but it's a good stopgap.
Finished bolting on the canards and brackets for the splitter and got it mocked up on the front end. Need to request instructions.
Remembered seeing someone rerouting their wiring harness on a stripped car between the interior and body of the shell so very slowly went about this with satisfying results.
Fitted the new rear cards in all of five minutes.
Replaced the gear lever cap with a new one. Little things make a lot of difference.

Biggest issue of contention; Airbags.
Starting to get really fed up with this now. Second hand airbag module arrived so fitted this and crossed fingers, still no joy £30 down the drain. Took out and refitted every resistor, doubled up legs where they would go, tested every single one of them. Still warning light.
Finally got my OBD reader to play ball and scan the car..... nothing.
No fault codes, no issues, no explanation as to why this is happening.
Check engine light is now gone and ESP light issue is intermittent, probably an easy fix, so after the brakes are bled, the PAS pump swapped and the suspension changed, this might be the only thing standing in the way of it being MOT worthy. Not sure where to go now. 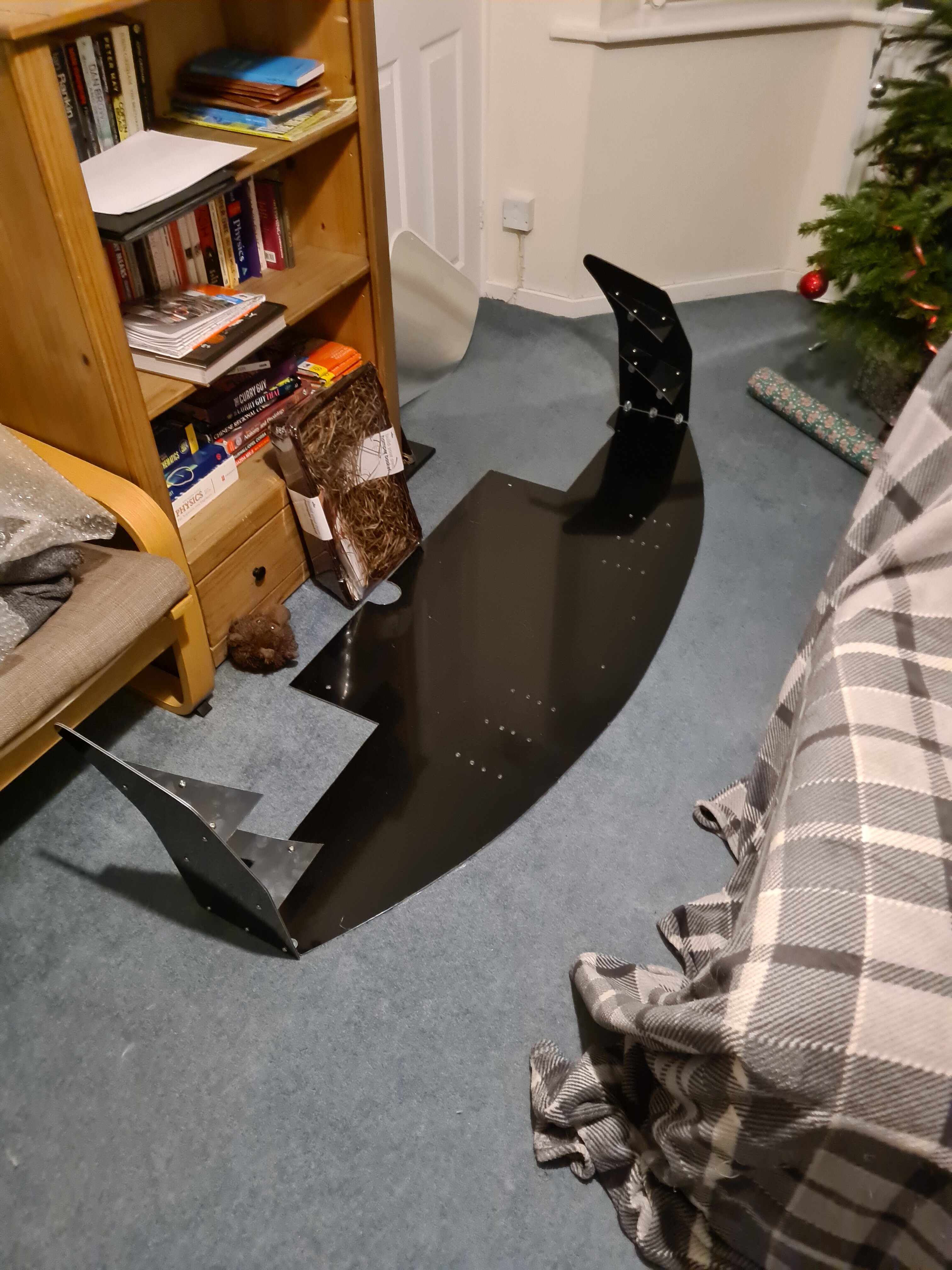 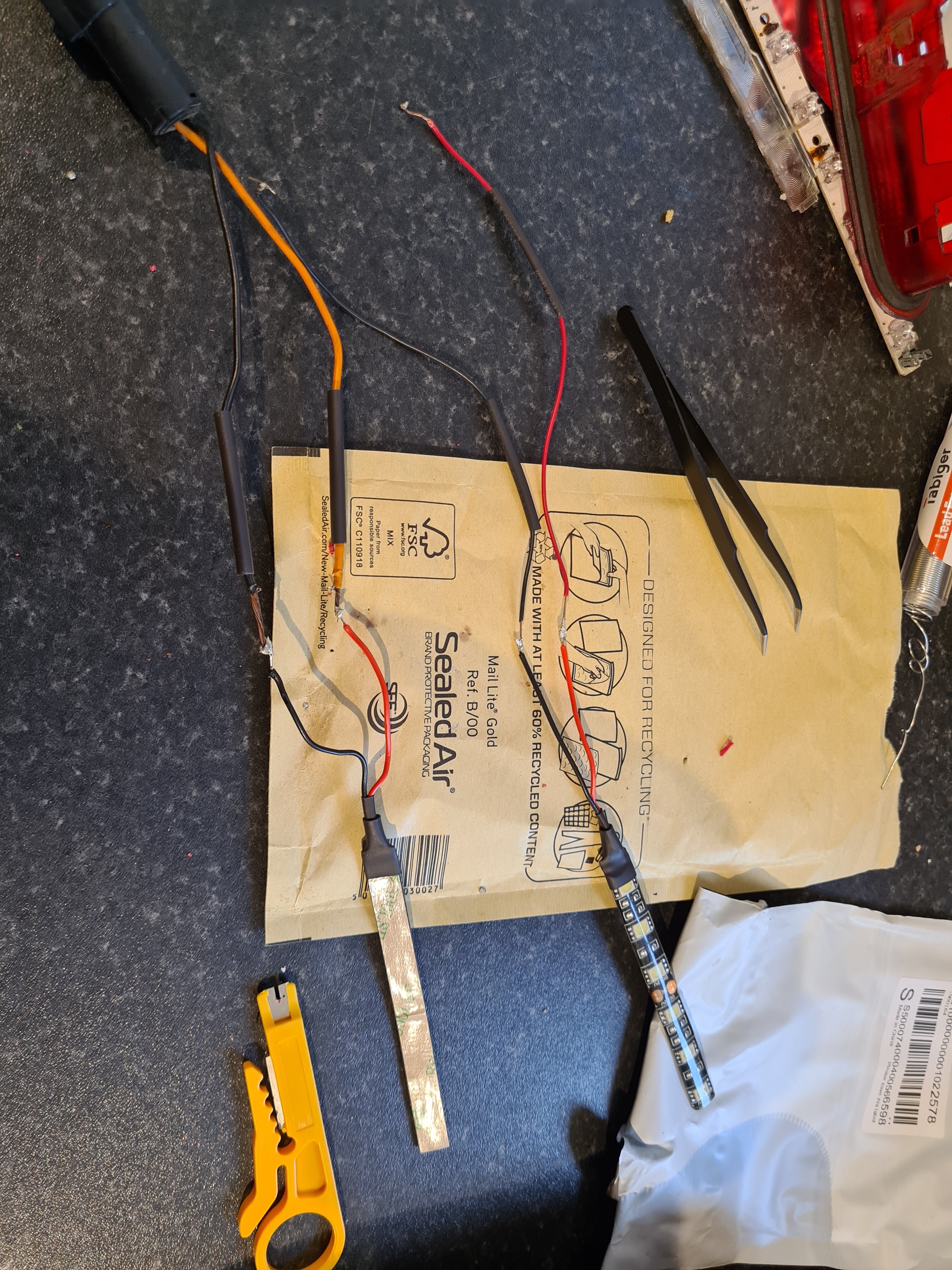 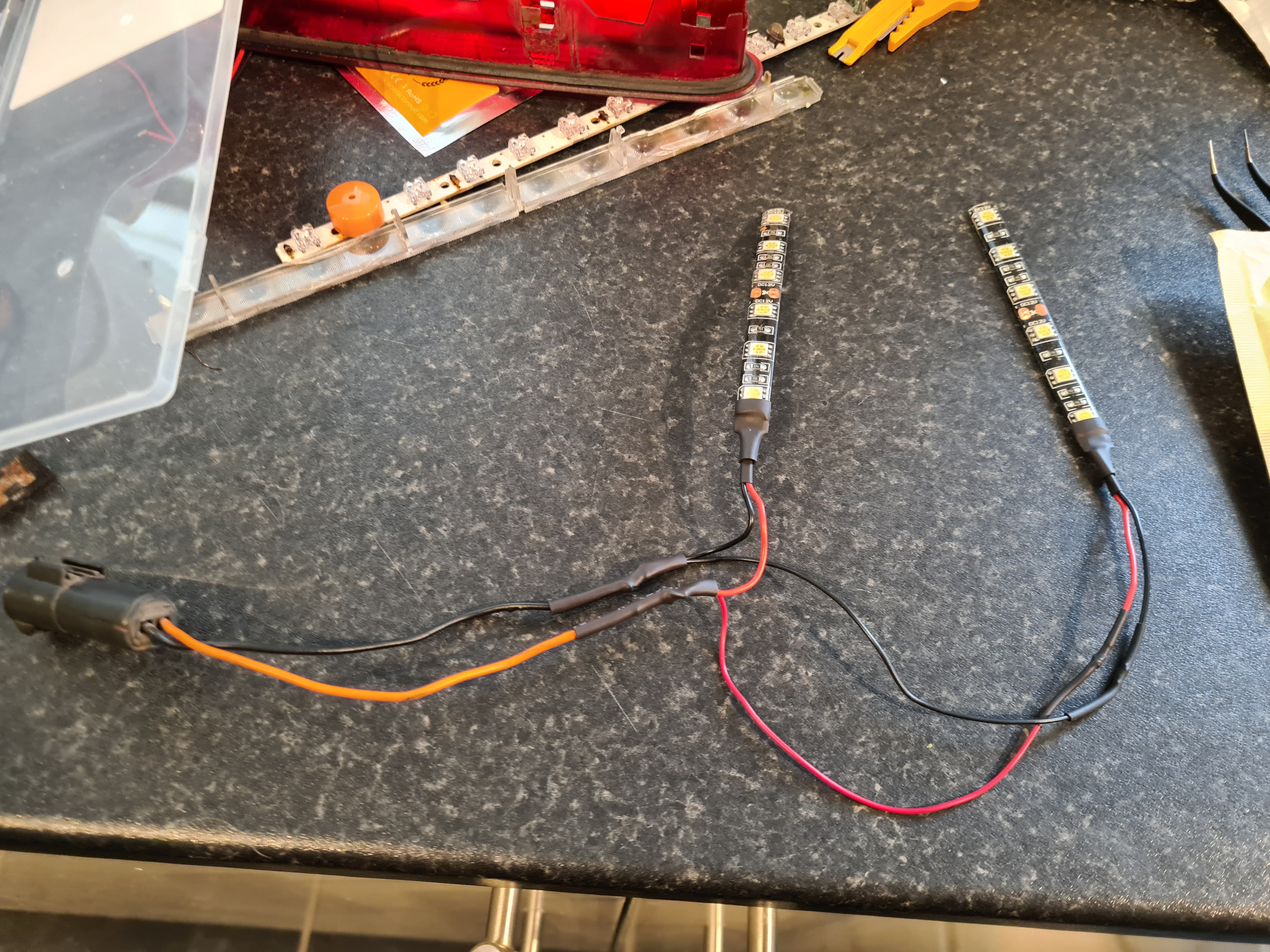 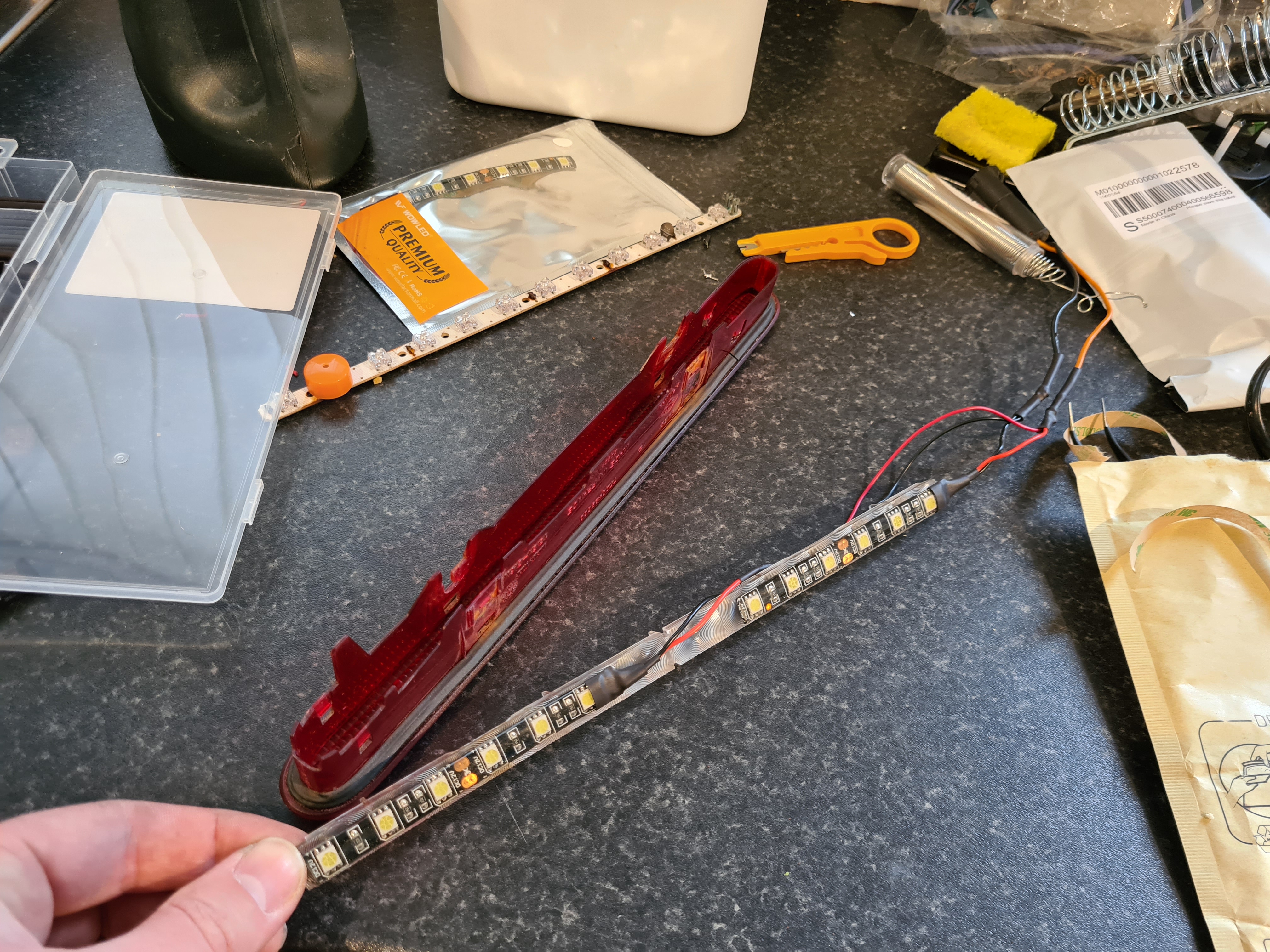 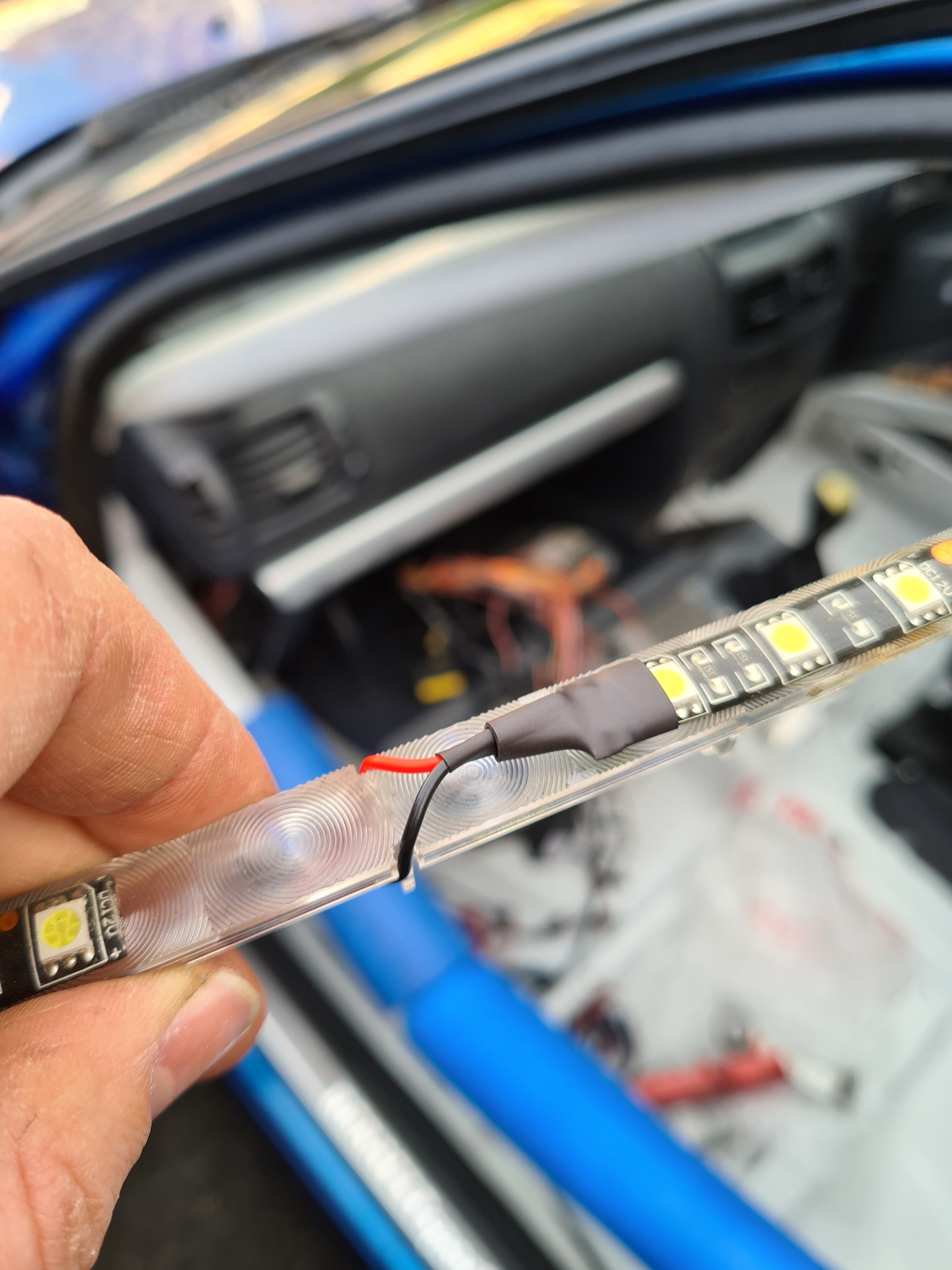 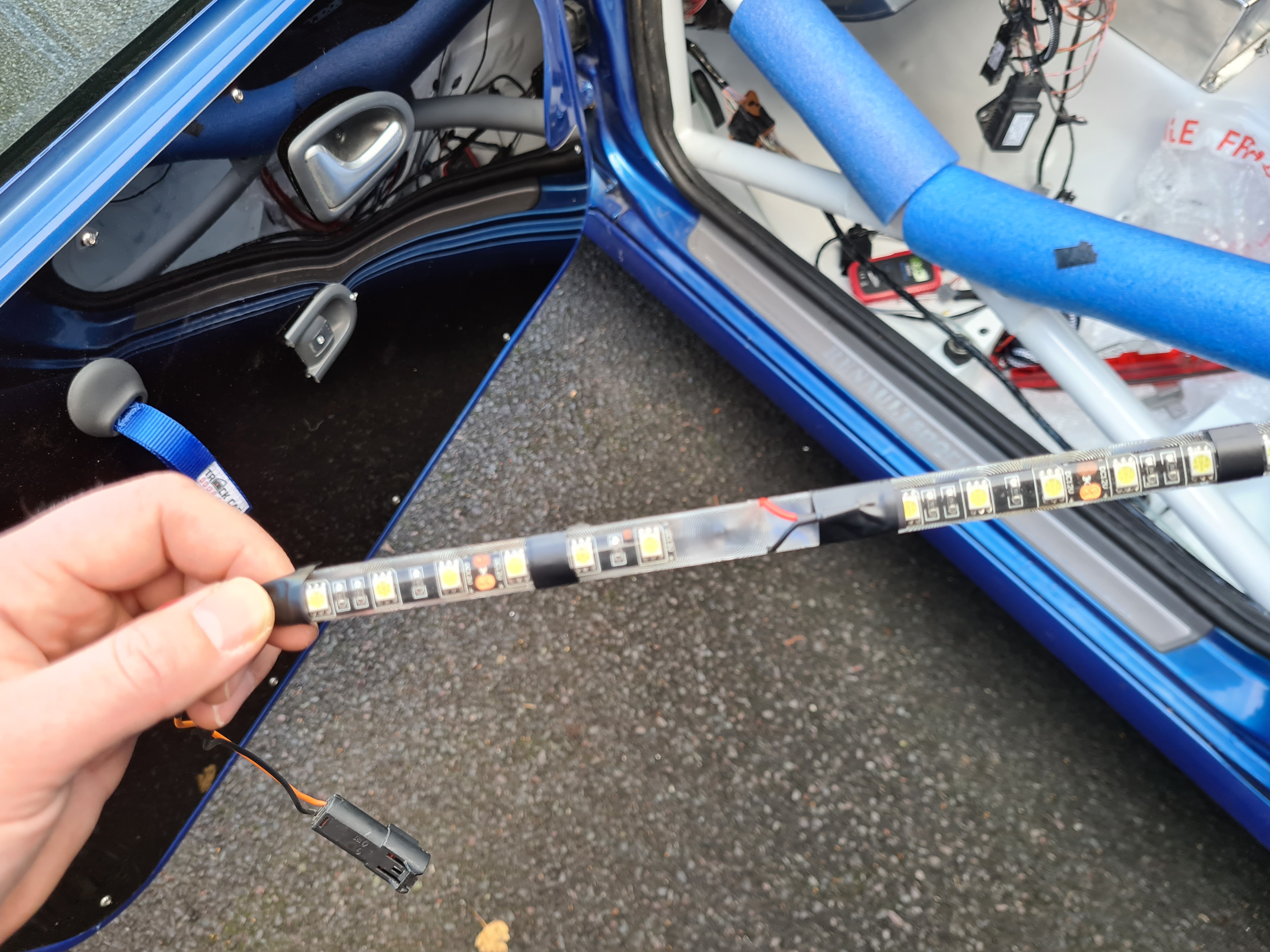 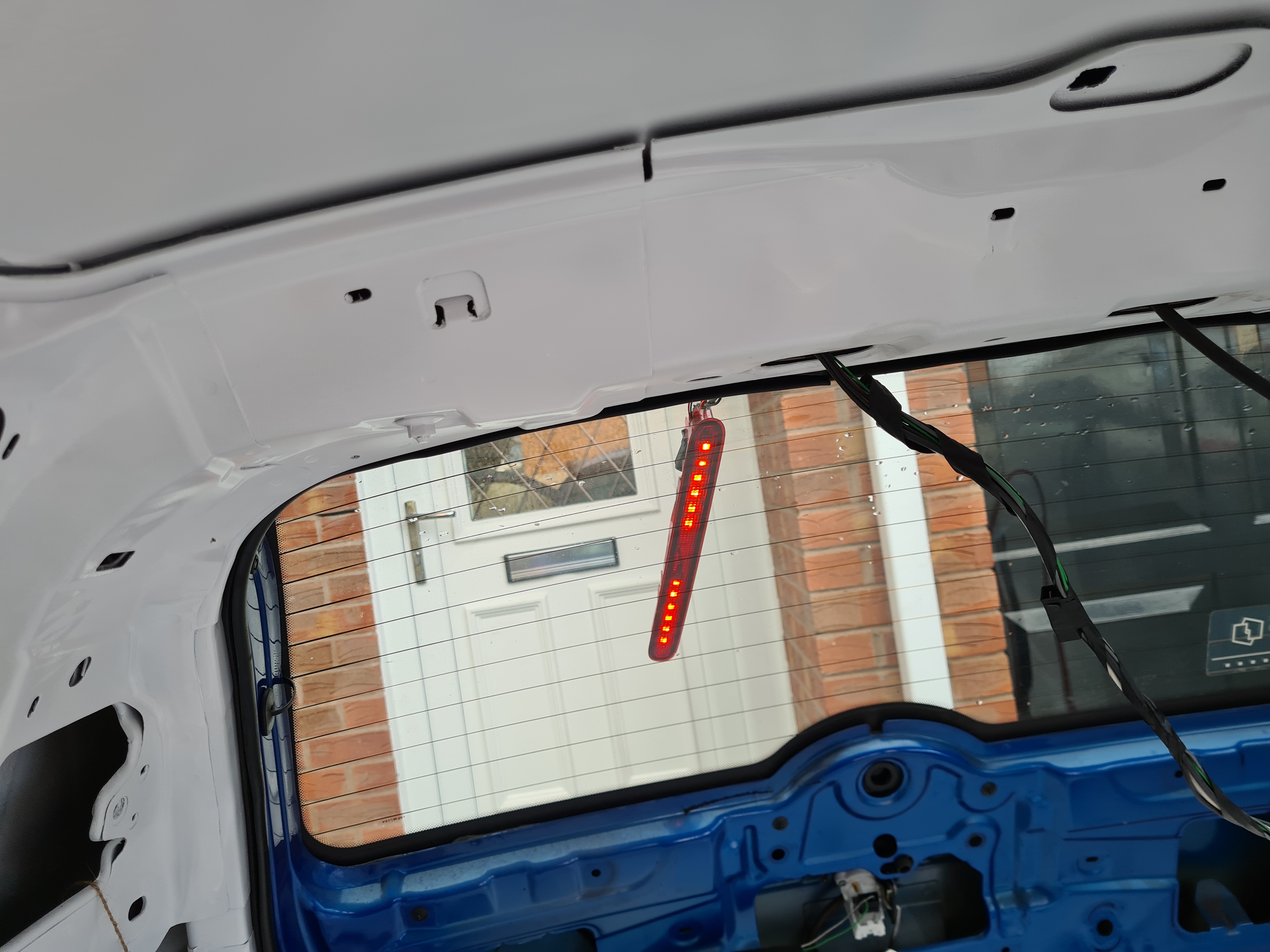 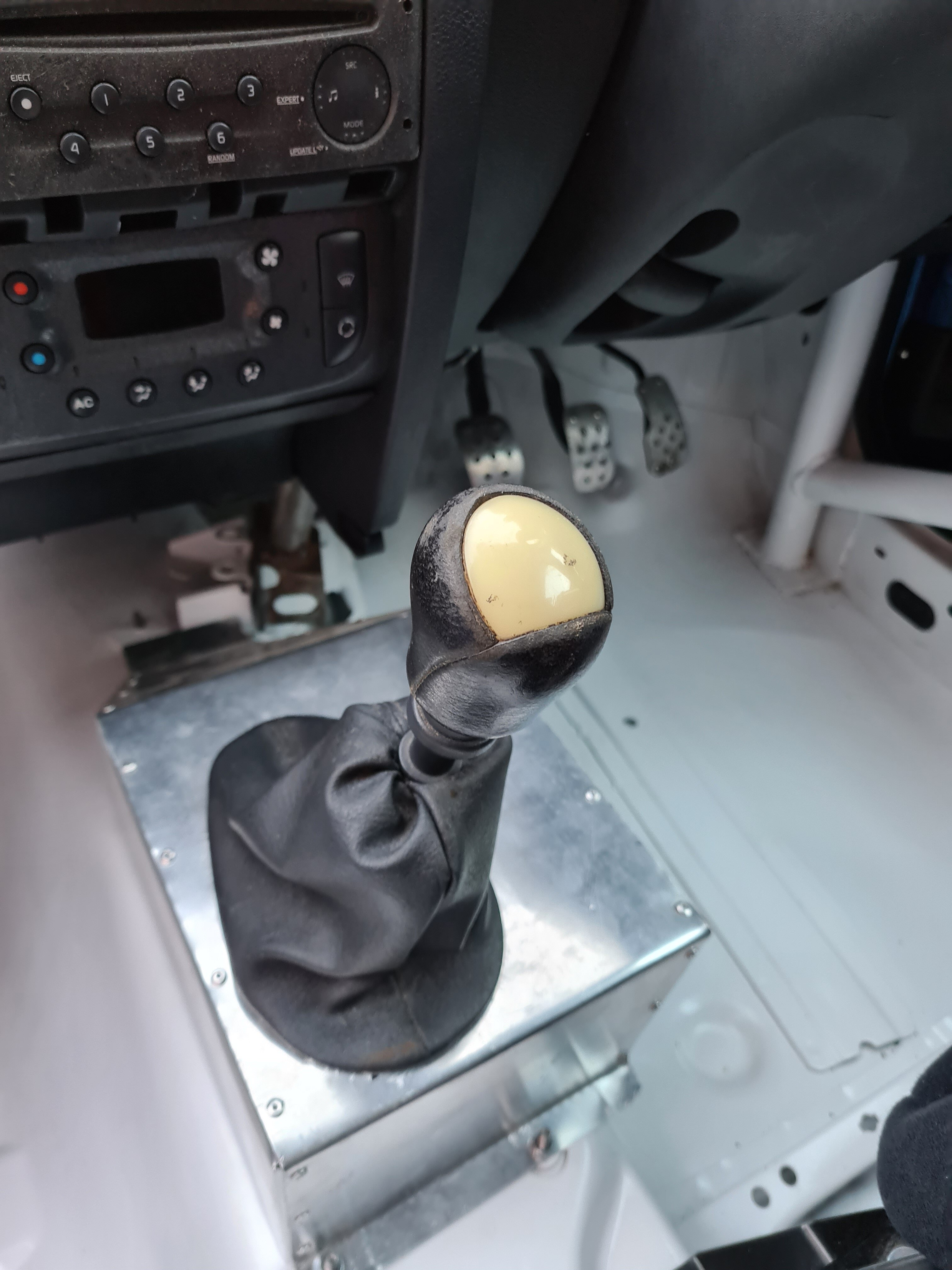 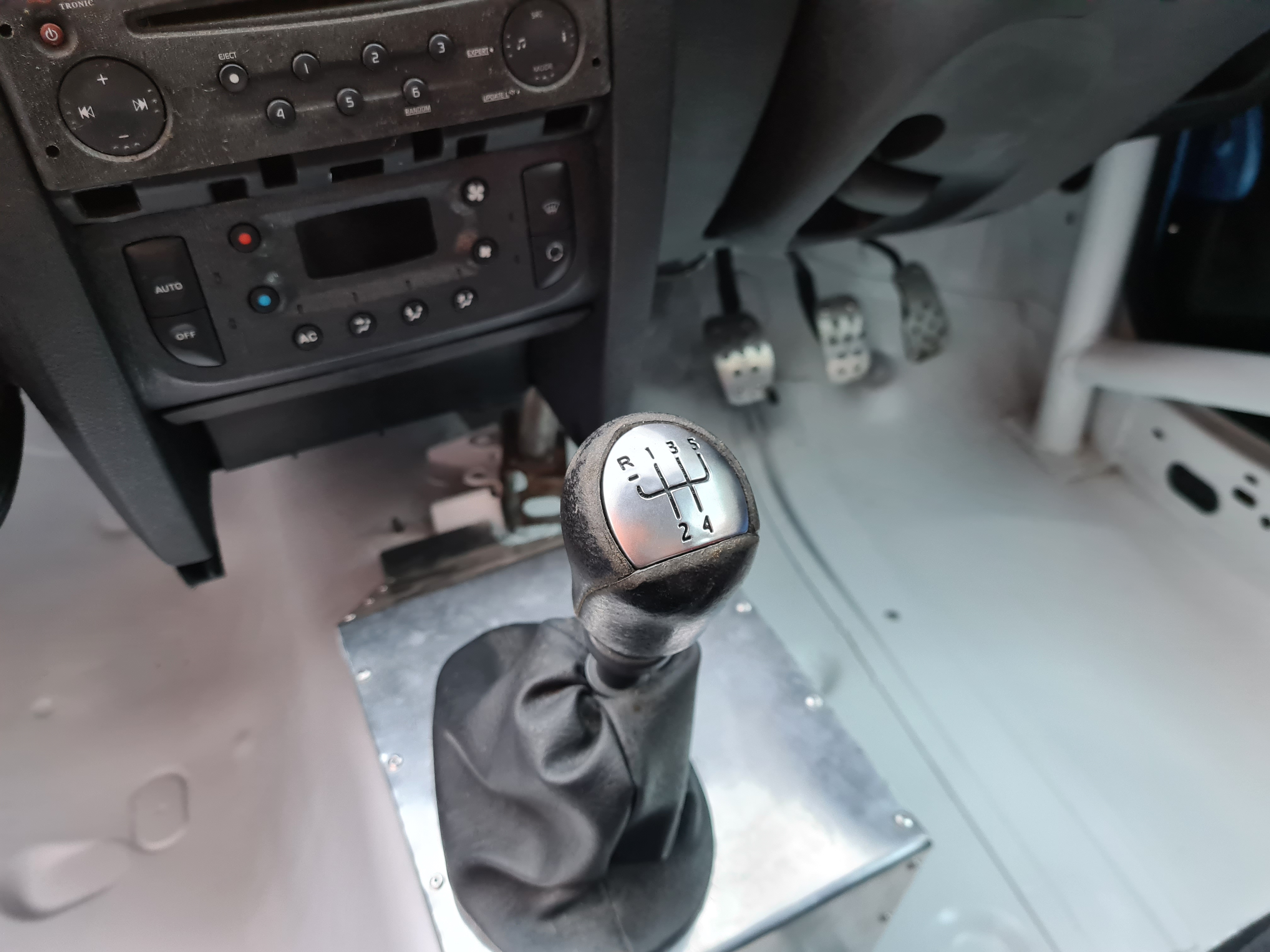 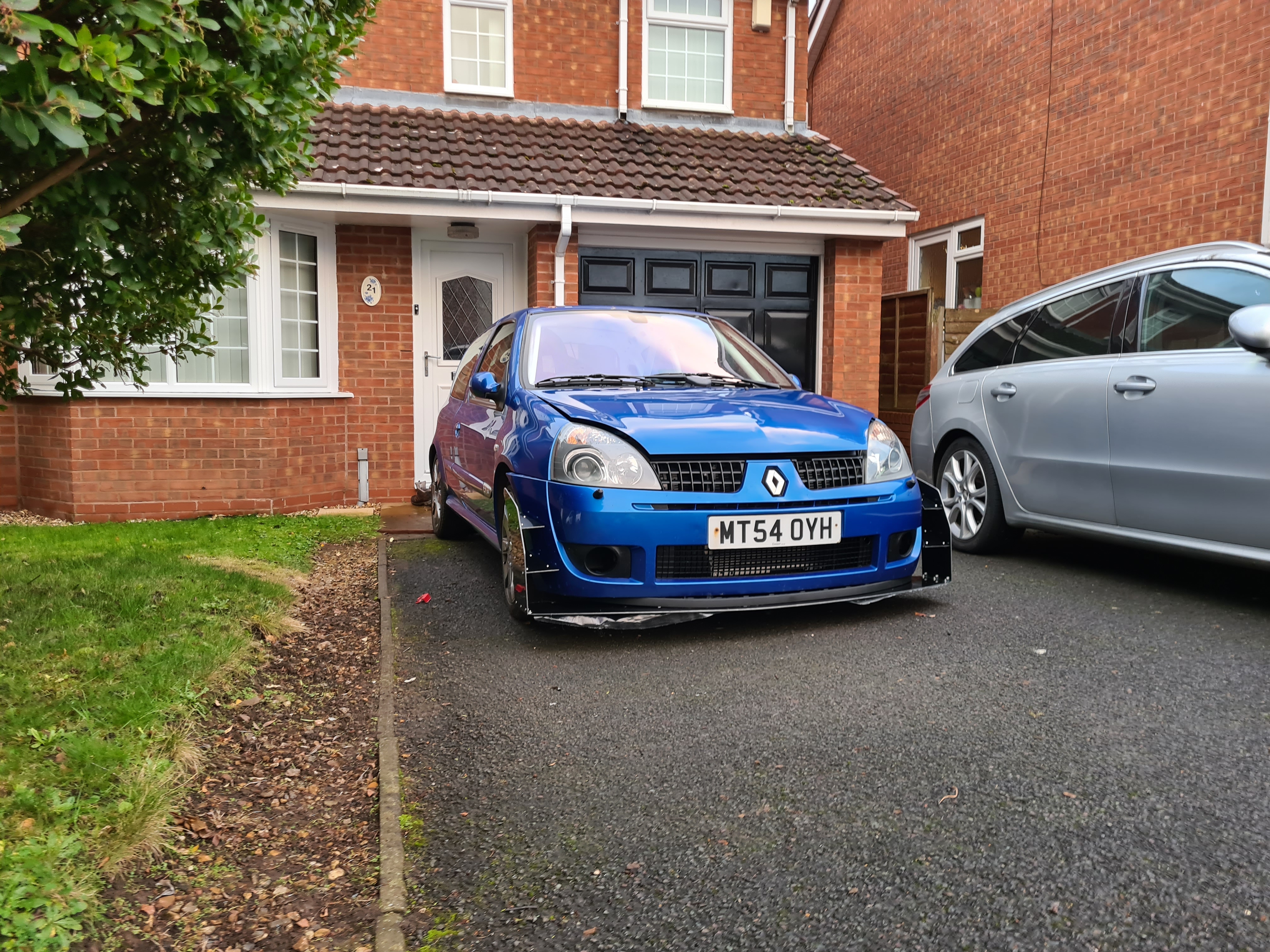 RS Clio 182
Nothing much to report lately. Started feeling crap on Sunday night, lateral flow positive yesterday and then PCR positive this morning.
Two big boxes of goodies arrived from K Tec this afternoon so a real mixed bag today. Full set of Bilstein B14, OMP strut brace and heavy duty wishbones.
Once all of this is done and airbag light is out, car should theoretically be MOT worthy. But I'm sure it'll throw something else up on the meantime. 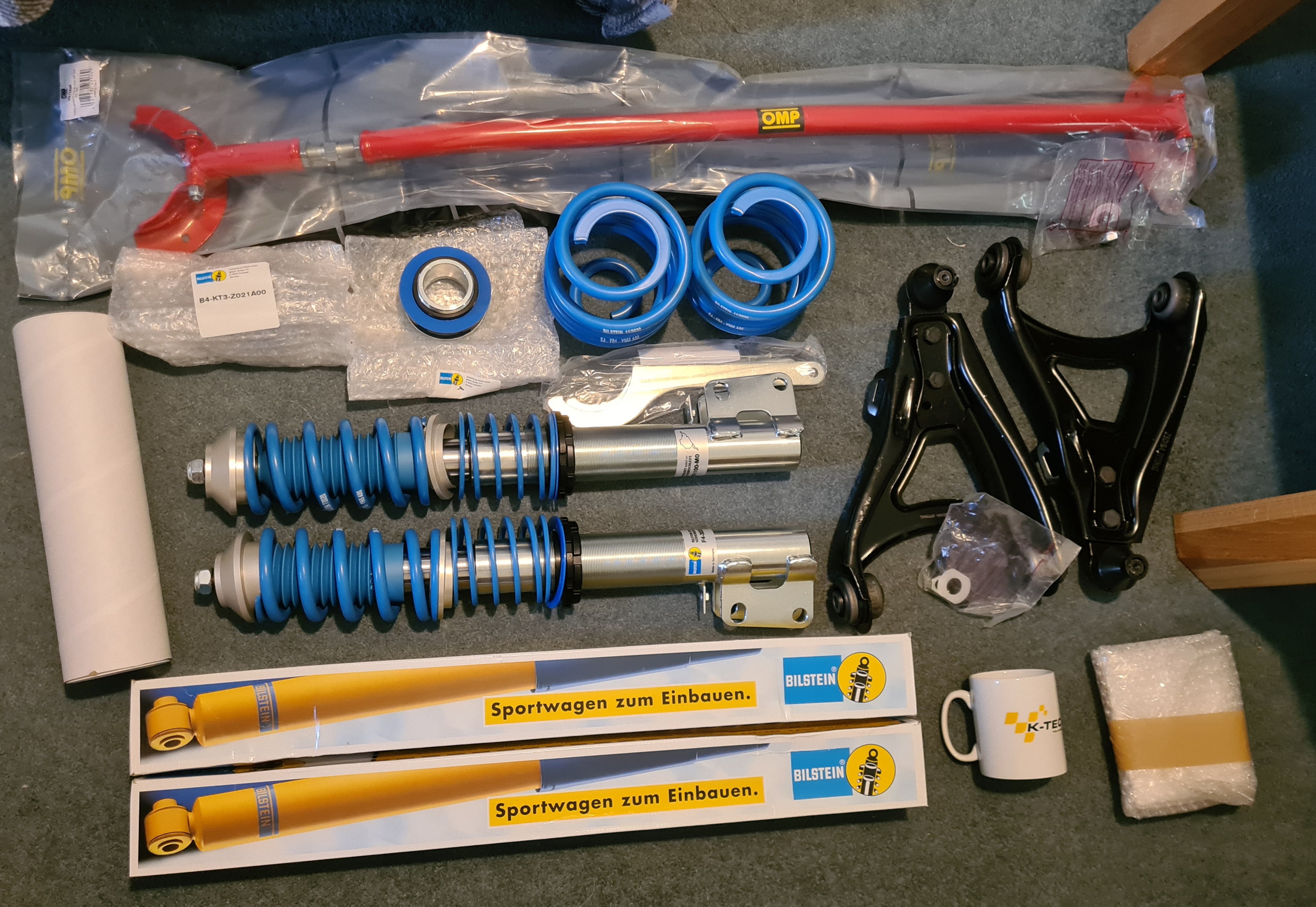