ClioSport Club Member
Too Many
So for some reason to which I have no idea or why its even happened the inside of my car is absolutely honking and there is a bad smell.
(its not me as I shower twice daily )

I have no idea what's caused it or what it is as I have not spilt anything or dropped anything.

I have fully checked the carpets and all are dry and I have checked under the seats also.

The smell is not coming through the vents and it smells worse when opening the boot of the car.

I have bought two bottles of febreze anti-bac fabric freshener and read the instructions which state to spray until damp and when on drying it will deodorize and remove smells.
I have left my windows opening an inch or so during the day and 1 week later the smell is exactly the same with no change.

Reading some ways to fully deodorize the car are -

If there’s a jack-of-all-odors cleaner, it’s white vinegar. White vinegar naturally kills bacteria, fungus, and mold thanks to its antibacterial and antifungal properties. It’s also super cheap. Mix one part white vinegar with two parts water in a spray bottle and spray on your seats. No labor necessary; just let it dry. Repeat as many times as needed.

An enzyme digester breaks down smelly bacteria quickly. It’s commonly found in pet odor removers and is safe for cloth upholstery. It won’t be as cheap as white vinegar, but it’s often odorless (unlike white vinegar). Just follow the directions on the package.

We grouped these two together because they work and are used in the same way. They both absorb odors from the air. Simply put a bowl of baking soda or coffee grounds in your vehicle overnight. Make sure that the windows and doors are completely shut. In the morning, dispose/compost the baking soda/coffee grounds. Repeat with a fresh bowl as necessary.

This one is for a car that smells like cigarettes. Most of the time, you’ll have to get a smoked-in vehicle professionally detailed, but you can place dryer sheets under the seats as a temporary solution. It will absorb smoking odors and give off a fresh scent. Switch them out when they stop absorbing odor.

Does anyone know or have any good solutions or tried a product that actually works and works well, Im once again going to be stripping the car out at the weekend and I have also bought an Air Con bomb to put through the A/C System to see if this helps.

Anyone shed any help on this ??

ClioSport Club Member
Titanium 182
Bit random how it's just happened without anything being split or dropped.

I use Valet Pro odour eater for stuff like that. Mix it 1:5 with warm water and spray over the fabric until they're damp, leave to dry.

Need to vacuum before application ideally.

JamesBryan said:
Bit random how it's just happened without anything being split or dropped.

I use Valet Pro odour eater for stuff like that. Mix it 1:5 with warm water and spray over the fabric until they're damp, leave to dry.

Need to vacuum before application ideally.
Click to expand...

Random is the key word as I normally hoover the car every couple of weeks and its clean with no rubbish , empty cans or anything else kept in the car.
I have taken the seat cover off the Recaro and washed this and that's fine.

Like I say I have checked everywhere and everything even to lifting the carpets to check.

ClioSport Club Member
Titanium 182
What does it smell like?

I have no idea, I cant put my finger on it and the closest thing I can think of is the bottom of a sticking washing basket that not been emptied in 6 weeks full of pants and socks.

ClioSport Club Member
Titanium 182
You say it smells worse in the boot?

Wondering if it's got wet and dried out at some point.

Formerly Mashed up egg in a cup

ClioSport Club Member
I imagine your on top of the pollen filter but change it anyway. Could be breaking down. Also air con can give you that smell. You may need it cleaned etc.

I remember a few years ago and it was the air con.

ClioSport Club Member
BG 182
Not eggy like a misfire?

Gally said:
I imagine your on top of the pollen filter but change it anyway. Could be breaking down. Also air con can give you that smell. You may need it cleaned etc.

I remember a few years ago and it was the air con.
Click to expand...

Just sat in the car for the past 10min with the A/C on and there is no smell coming from the vents.

Pollen & air filter where changed with the full service at end of jan 2021.

ClioSport Moderator
Whichever has fuel
You say it’s worse in the boot, Have you tried taking out the boot mat and all the trims? Put them all in the garage and if the smell goes, there’s your culprit?

ClioSport Club Member
Lots of Scrap...
Sounds like a leak that's led to fustiness and if worse in boot could be the rear grommets or similar. AA,above, rip boot carpets etc all out and see

ClioSport Club Member
I think giving the interior a good clean and hang it to dry is the only solution if there's no clear cause..

You'll be amazed at how much crap builds up on the back of panels over the years, rinse water coming off it was black. 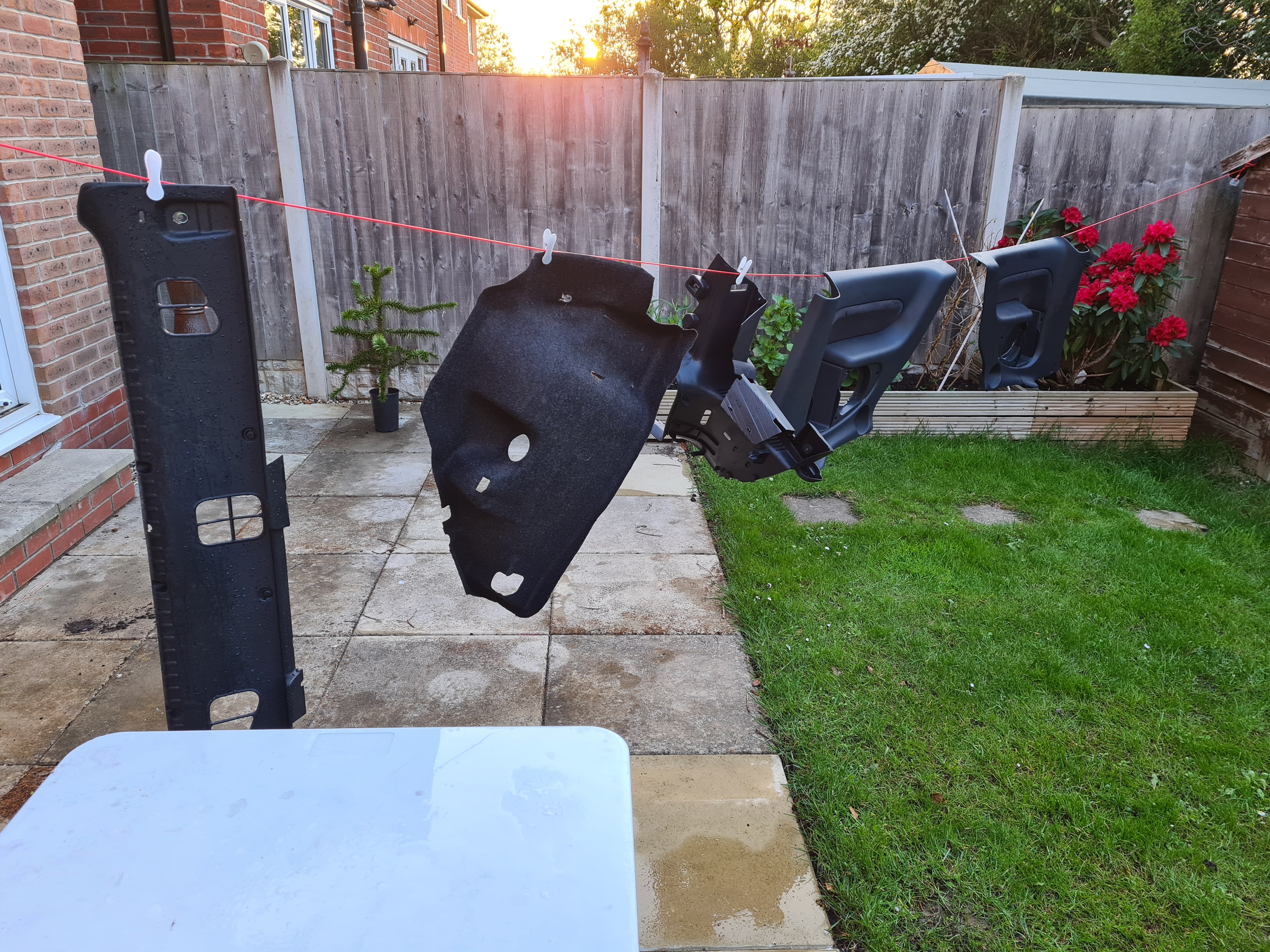 ClioSport Club Member
Too Many
So got into the car this morning and still there , checked everything and had my hand under all the carpets looking for wet / dampness.

Boot & rear seats are getting ripped out and jet washed this weekend and all plastic trims cleaned and interior fully washed.

it’s actually doing my head in now as it’s been over a week and can’t find a thing.

ClioSport Area Rep
Ford S-Max 2.2 175
I had a sort of sour milk smell in my S-max that came from the boot area.

Turned out to be a split in the rear washer hose, and it was leaking and pooling in the rear driver's-side wing.

ClioSport Club Member
Too Many
Everything is bone dry and I mean bone dry.

roof lining , under seats, under boot carpet, rear 1/4 panel boot carpets are fine.
Lights have all been taken out and cleaned, boot seal is perfect with no cuts, nicks or tears.

Just ordered 4 new tailgate grommets and like I say it’s getting fully stripped out including the rear carpet, seats and full boot.

MarcB said:
Everything is bone dry and I mean bone dry.

roof lining , under seats, under boot carpet, rear 1/4 panel boot carpets are fine.
Lights have all been taken out and cleaned, boot seal is perfect with no cuts, nicks or tears.

Just ordered 4 new tailgate grommets and like I say it’s getting fully stripped out including the rear carpet, seats and full boot.
Click to expand...

I would strip the back end down as suggested. Seen it before where there had been a dead mouse is the boot cavities of cars

ClioSport Club Member
Too Many
Right been back in the C**T of a car and yet still nothing, The smell is not as bad but I know its there.
Not managed to clean anything but ripped most of it out and checked it all. Nothing is damp, wet, mouldy , eaten or anything else.

My head actually hurts trying to figure this out and why.

I will await my ValetPRO Enzyme Odour Eater and once its all cleaned and sorted with spray everything before its back in.

ClioSport Club Member
BG 182
Do others notice it? Not had covid have you?

ClioSport Club Member
Too Many
So over the weekend the car has been all striped out (Back Seats, Back Door Cards, Boot & Boot Carpets)

Also replaced the two rubber grommets on the tailgate as pictured.

Wiped all the inside & any plastics down with a bucket of warm water and some white vinegar.

Hoovered all the carpets and checked for any leaks / mould or water ingress and nothing.

Heavily sprayed the full interior with the ValetPRO Enzyme Odour Eater and left it in the sun to dry and air.

Built all the car back up and once again checked everything and it seems perfect and spot on.


Will check the car in the morning for the smell and see how things go. 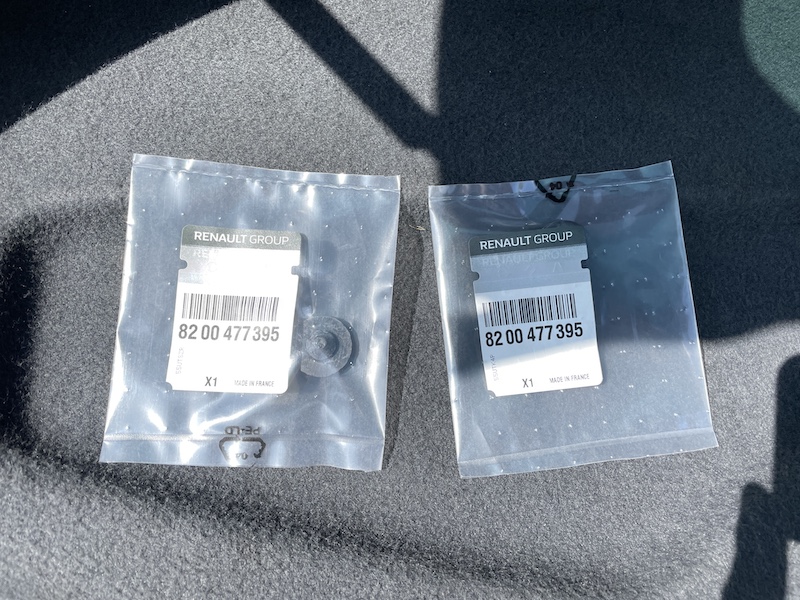 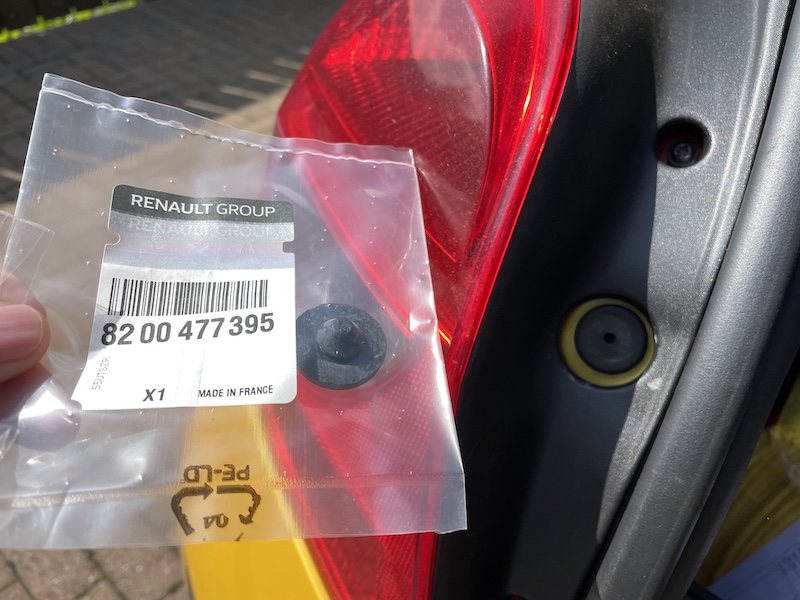 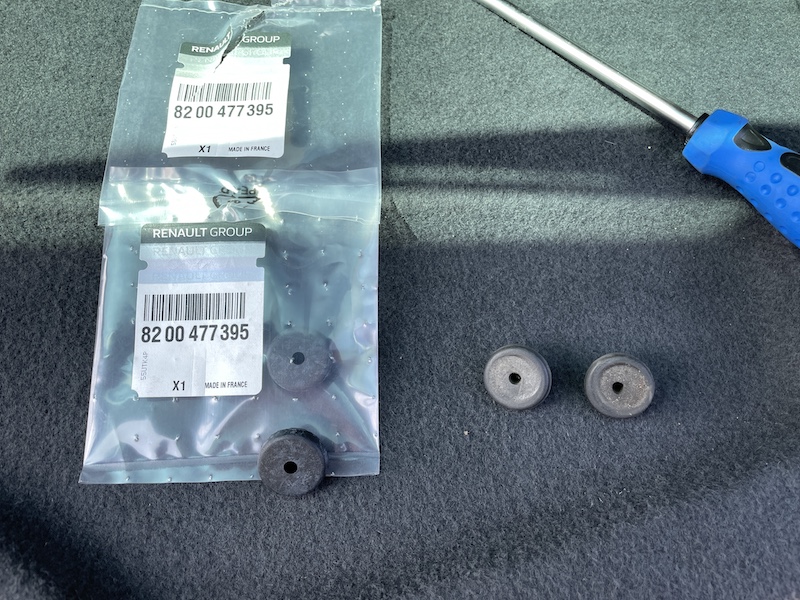 ClioSport Club Member
Fingers crossed you've sorted it after all that effort.

Maybe every time you sit on the chairs it pushes the previous cabbage smell out of the foam?

RyG said:
Sure it’s not just a case or severe swamp-arse?

Maybe every time you sit on the chairs it pushes the previous cabbage smell out of the foam?
Click to expand...

Then this would always smell and not just in the last 14 days.

ClioSport Club Member
Too Many
I would like to report that I HAVE NO SMELL !!!

Still no idea what it was or why .

Cribert said:
A wee jobby in the spare wheel well
Click to expand...

ClioSport Club Member
Clio 172
Glad to hear it's sorted. I was going to suggest some bits of roadkill stuck somewhere underneath, but for your sake, I'm glad it's not that.

Well that answers it then immediately, it's a mk3 so obviously it stinks

ClioSport Club Member
182, E46 M3, 1000RR
Detol is pretty handy stuff - spilt a pint of milk in a car a while back and come summer (even after scrubbing it at the time) it was a no go zone. Nothing worked until I soaked the car in detol which fixed it.
You must log in or register to reply here.

E
Plastic Fuel Hose - where to purchase a length of plain hose?