I bought my dream car.

For at least 10 years I’ve looked, thought about it, backed out and dodged buying a 996. Since they were released when I was an impressionable age, something about their ugly headlights and rounded 90s features drew me in. I imagine “Tina” from Gone in 60 Seconds, and the Need For Speed: Porsche game did the rest of the work.

Anyway, since the world is ending and everything, figured I had no excuse now. The good thing about searching for so long, is you get a good idea of what spec you want. Whilst the 996 C4S is undoubtably the nicest looking, from a driving point of view there was something else I wanted.

The Carrera 2 is the obvious choice. In particular, the earliest cars (1998) are the pick of the bunch. They use a cable throttle, and have no traction control. They’re also the lightest, around 1300kgs. About 50kgs lighter than the 996 GT3. 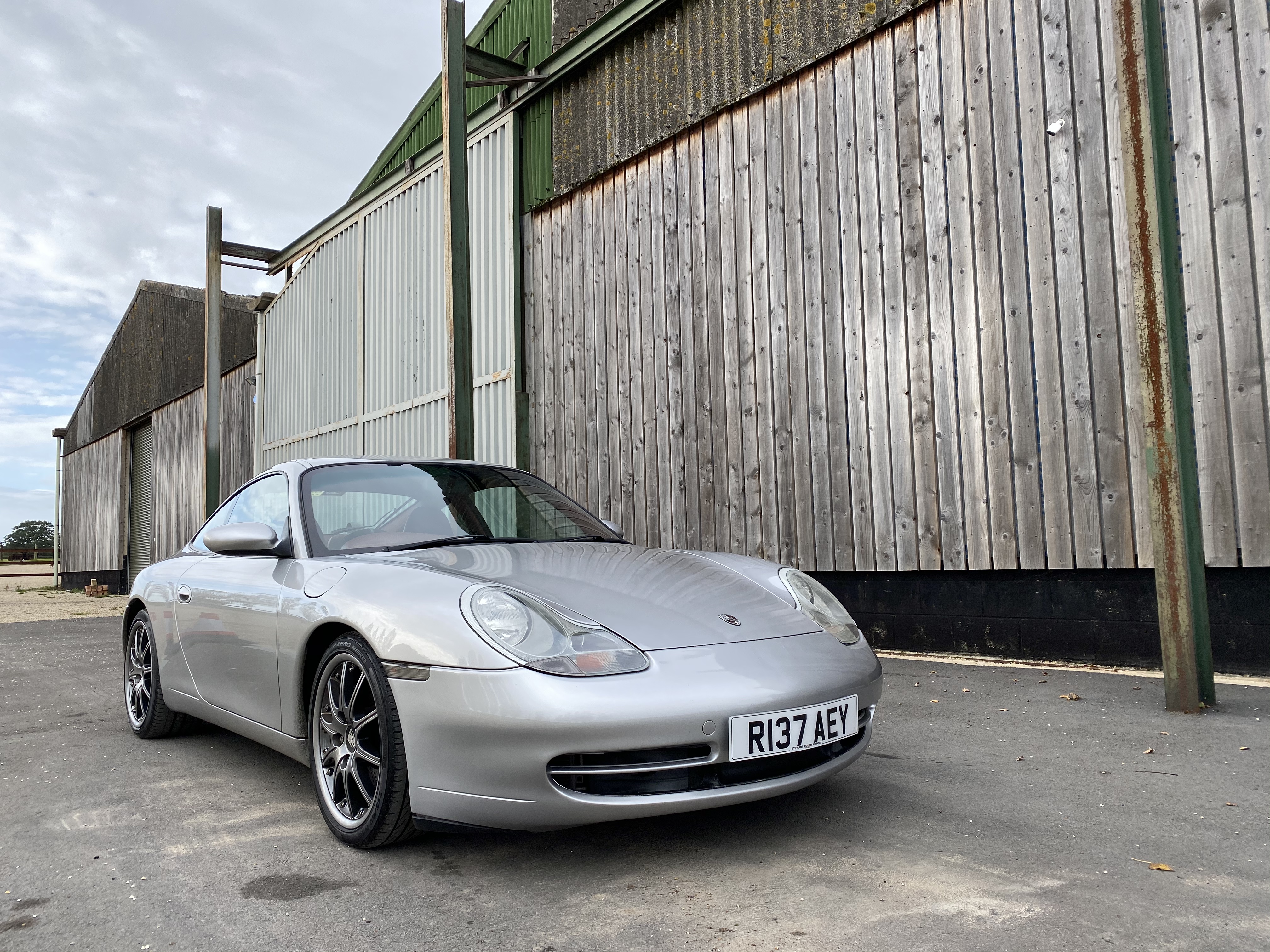 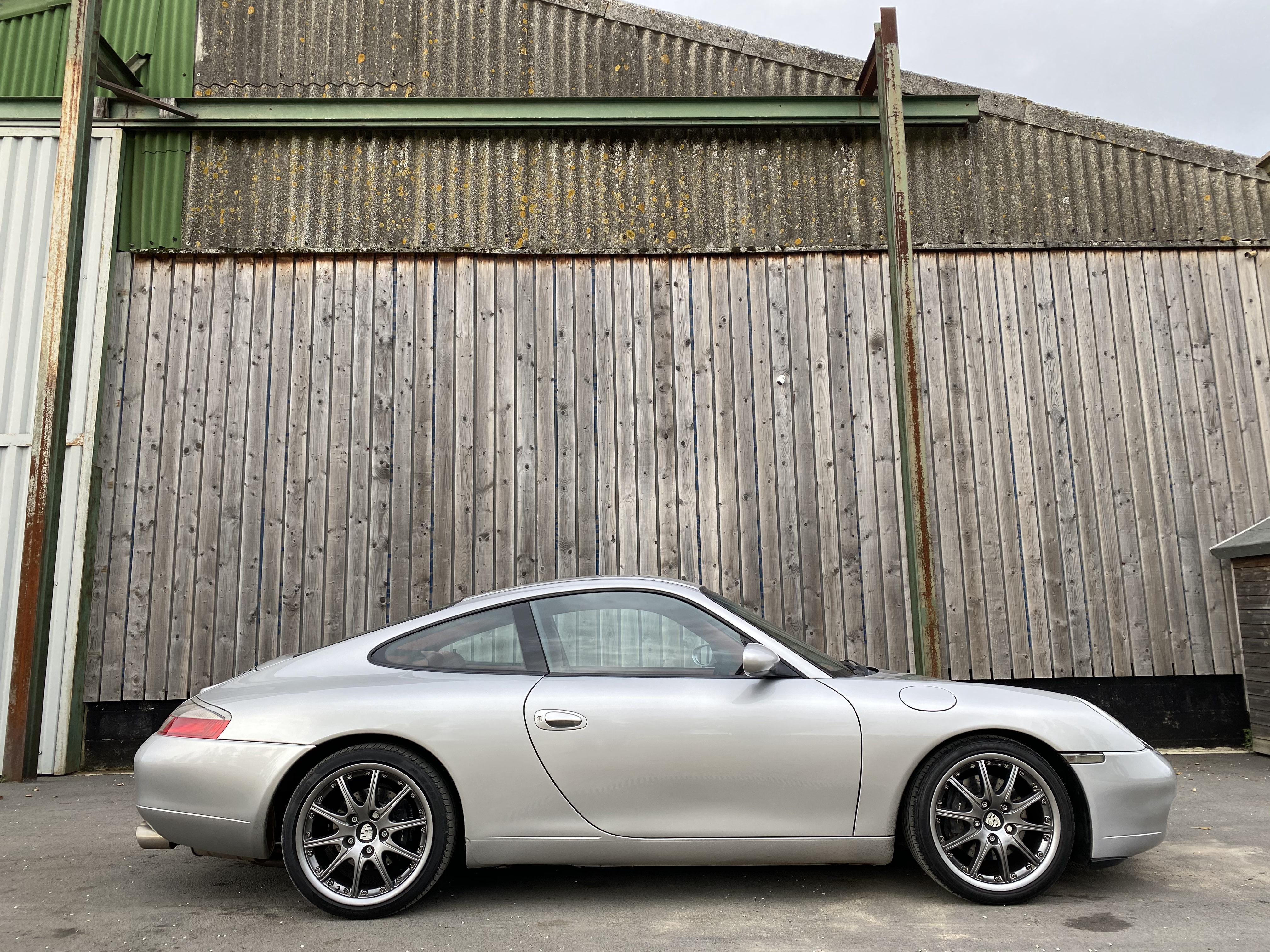 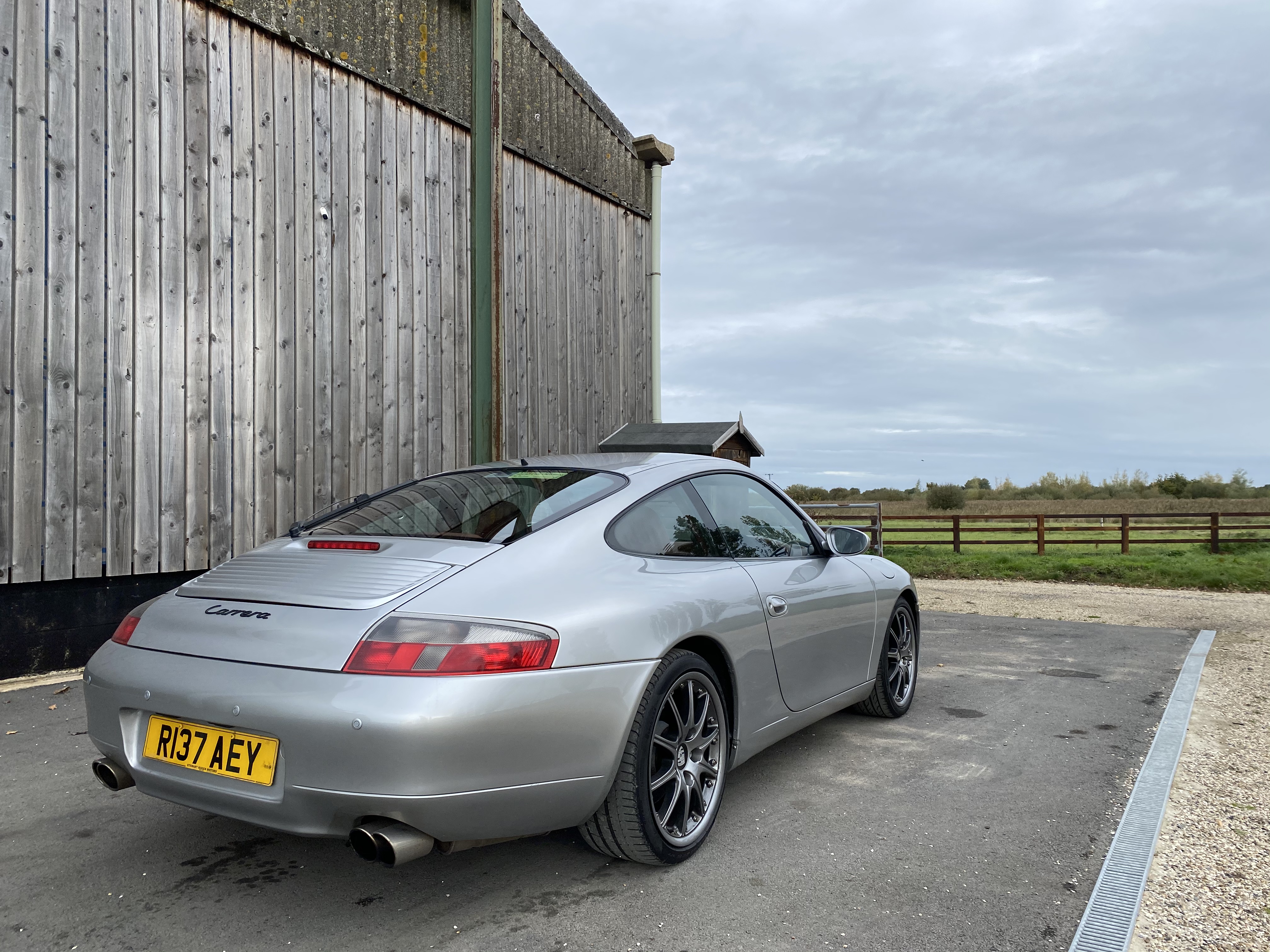 So here’s what I ended up buying. A 1998 Carrera 2 with about 99,000 miles on it. It’s been fitted with 99‘ year lights (headlights, taillights, indicators), but I’ve ordered the correct amber ones off eBay. Luckily every man over 40 wants smoked/clear lights, so mine are worth double what I’ve paid for the amber ones. That’s right, i want the fried eggs.

The other thing this car has that I wanted.... a bright interior. They’re quite renowned for it, and often hated. But the “Boxster Red” interior looks fantastic to me, brilliantly 90s. 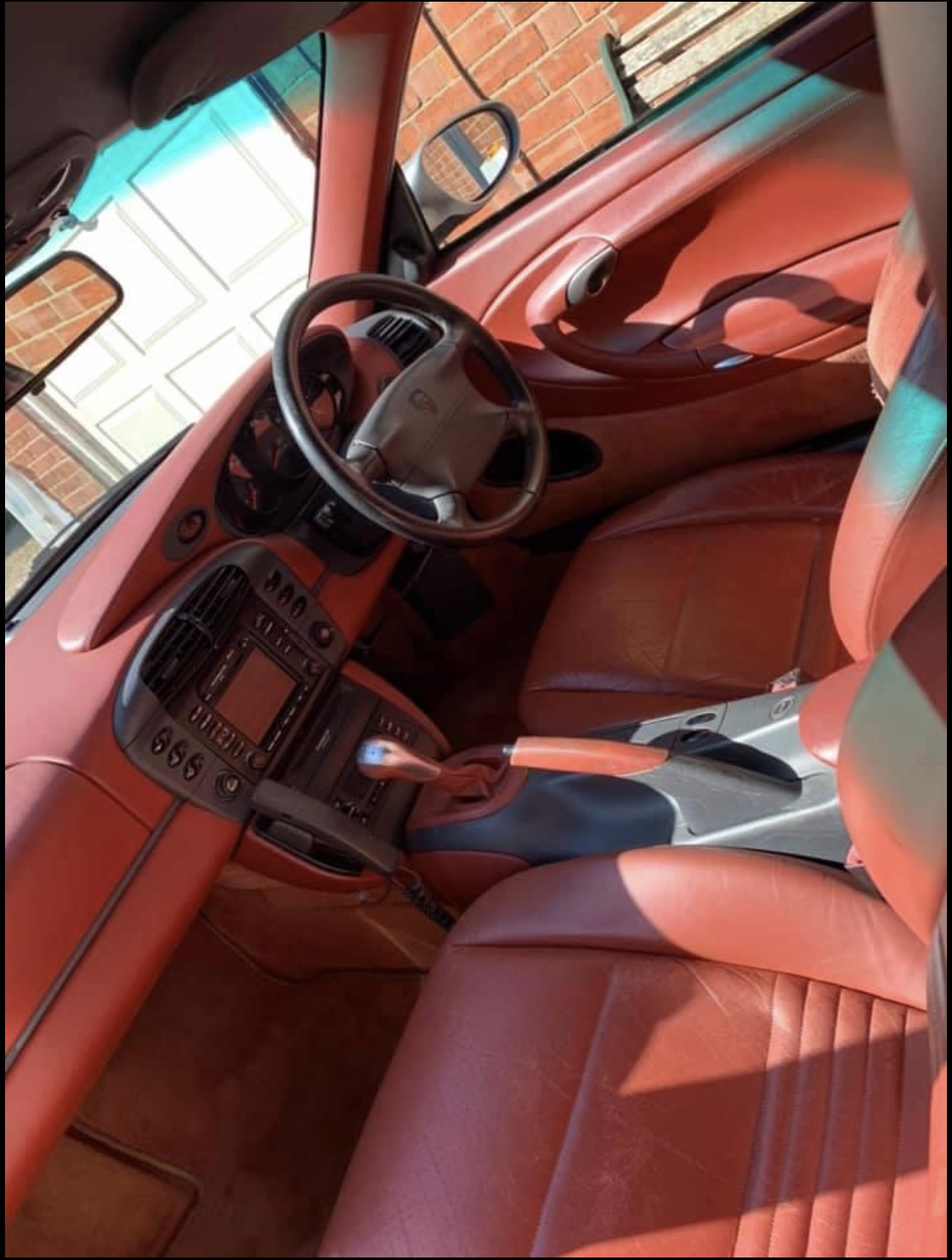 One previous owner did most of the work, including the wheels. He owned it from 2012 till 2018 when he passed away. His wife kept it for 2 years and couldn’t bare to part with it. He also did something I’ve never seen with a car before. He kept a hand written diary, with notes about work on the car etc. 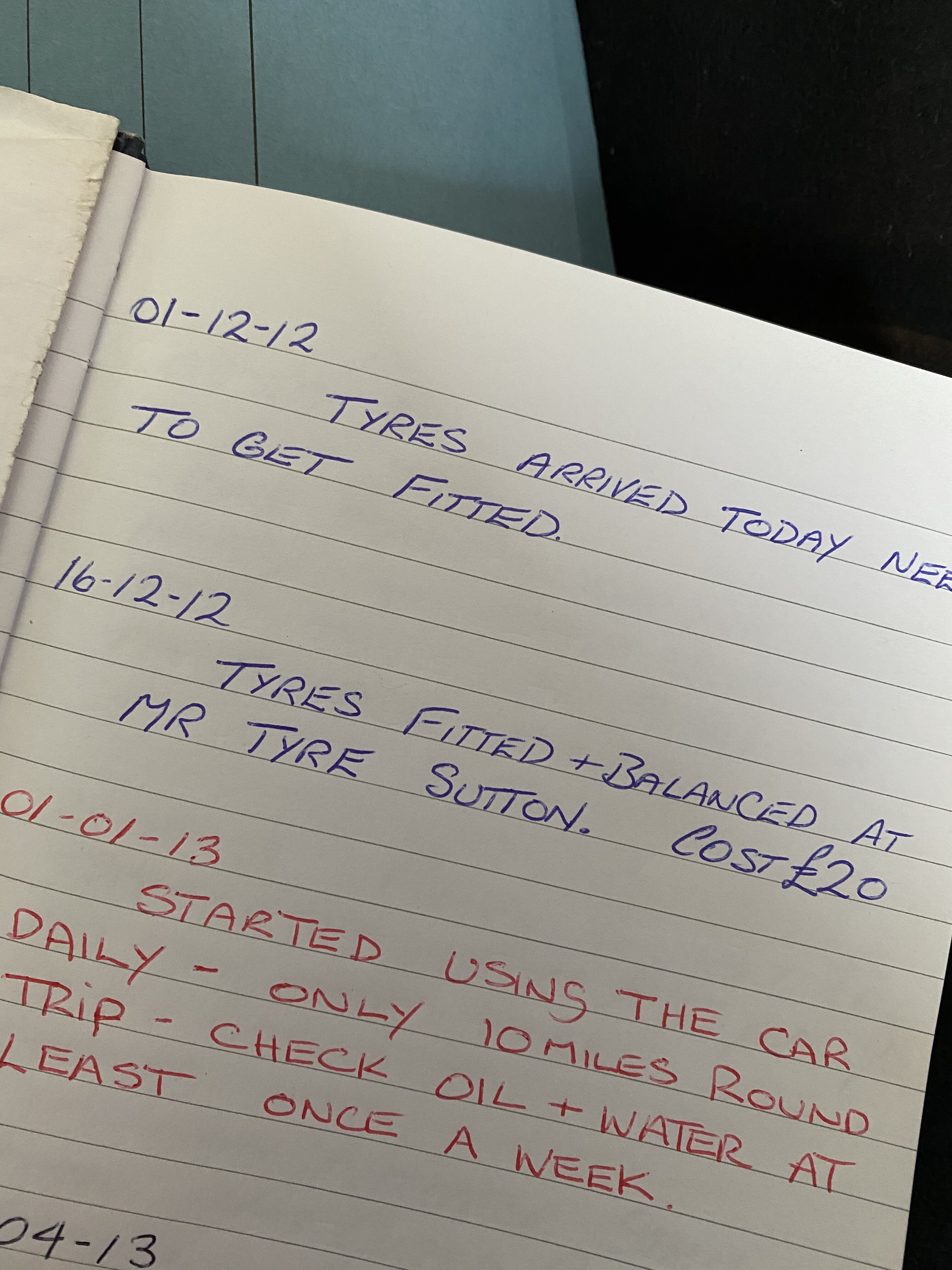 The history with the car isnt totally spectacular. In fact for a Porsche, the you’d consider it quite sparse. It’s missing it’s service book, but has around 100 receipts for various work over the years. Including clutch, IMS and other scary bits.

As a result it feels tight as anything to drive. The experience is far more raw than I was expecting, partly due to the M030 Suspension kit fitted. But that’s a positive to me. For a 300bhp old 911 with no traction control, it’s surprisingly confidence inspiring. I’ve only driven it a couple of times but already it’s lived up to expectation. The exhaust that’s been fitting sounds fantastic, the steering is very responsive and the brakes have what I can only describe as perfect feel.

Basically, it’s not blown up yet so I’m happy.

You do not see that interior very often either.

ClioSport Club Member
a better one
Love it. Hope you’re going to use it lots.

think we need a CS Porsche meet up

You do not see that interior very often either.
Click to expand...

Cheers ! It currently has a gash Sparco wheel, but I’ve ordered a Personal Neo Grinta as I’ve always wanted one of them and I also want leather, not cheap fuzzy suede.

ClioSport Club Member
Nice price! Thought my mate was doing well getting a 996 C4 for £6500 (black manual with sports seats too!)

Congrats on a dream car!

I’ve driven my mate’s one a couple of times and it goes better than I’d have expected.

There’s one on PH that needs an engine rebuild for £8500.

ClioSport Club Member
Ateca/700hp Civic/Je
Nice man! Duno if i could live with that dash etc in the same colour though.
J

ClioSport Club Member
M2,XJS,S1000RR
I love that.
Can you post the number for the car phone too, be a shame to not have someone call you in a traffic jam.

Good work going back to std lights too.
J

A friend of [mention]Cookie [/mention] has one. Same spec. He loves his. I hate porkas so it’s not for me. 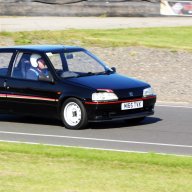 JD said:
hate porkas so it’s not for me.
Click to expand...

How can you hate Porsche’s! Did one come on to your mrs?
K

BMW E34 535i
That journal is next level OCD, little things like that can tell a lot about how it was looked after. The original owner of my E34 has something similar but not to the extent of a dedicated book. It has all the old tax discs stapled to the reminders with "Paid at local post office on <date> for £**" written on the top and other notes like "Phoned DVLA to clarify.....". Also there is a hand written letter to the previous owner thanking them for posting the garage key back to the original owner as it was accidently left on the key.

ClioSport Club Member
Really nice that - cool as f**k interior. The only thing I can't get on with are the wheels, I'm not big on Porsches, assume they're not standard?

Its a base C2 in the worst colour combo with no service history and rust on the MOT history. Was £6k a bit toppy?

ClioSport Club Member
Clio 182FF titanium
Loved it, wheels and colour perfect right up until I scrolled to the interior shot. It’s the same colour as @leeds_182 volvo. Not for me I’m afraid. Everything else 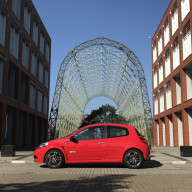 ClioSport Club Member
S3
Such a YouTube clickbait thread title. Love it.
Wonder how dicey things will get with no TC over winter...
W

Maximum potential for death, balanced against the need to actually drive properly.

The interior is... interesting...

ClioSport Club Member
4GTS/7.5R/182
I am guilty of lusting after the fat ass variants but really that was the smart choice, well done!

I saw a Targa 997 in the same interior colour in the flesh and you do need to be brave indeed, but you know what, it does suit the 90s vibe in the 996.

Hope you enjoy it throughout the winter, porkas deserve to be driven not SORN'd!

quick picture from a father/son drive 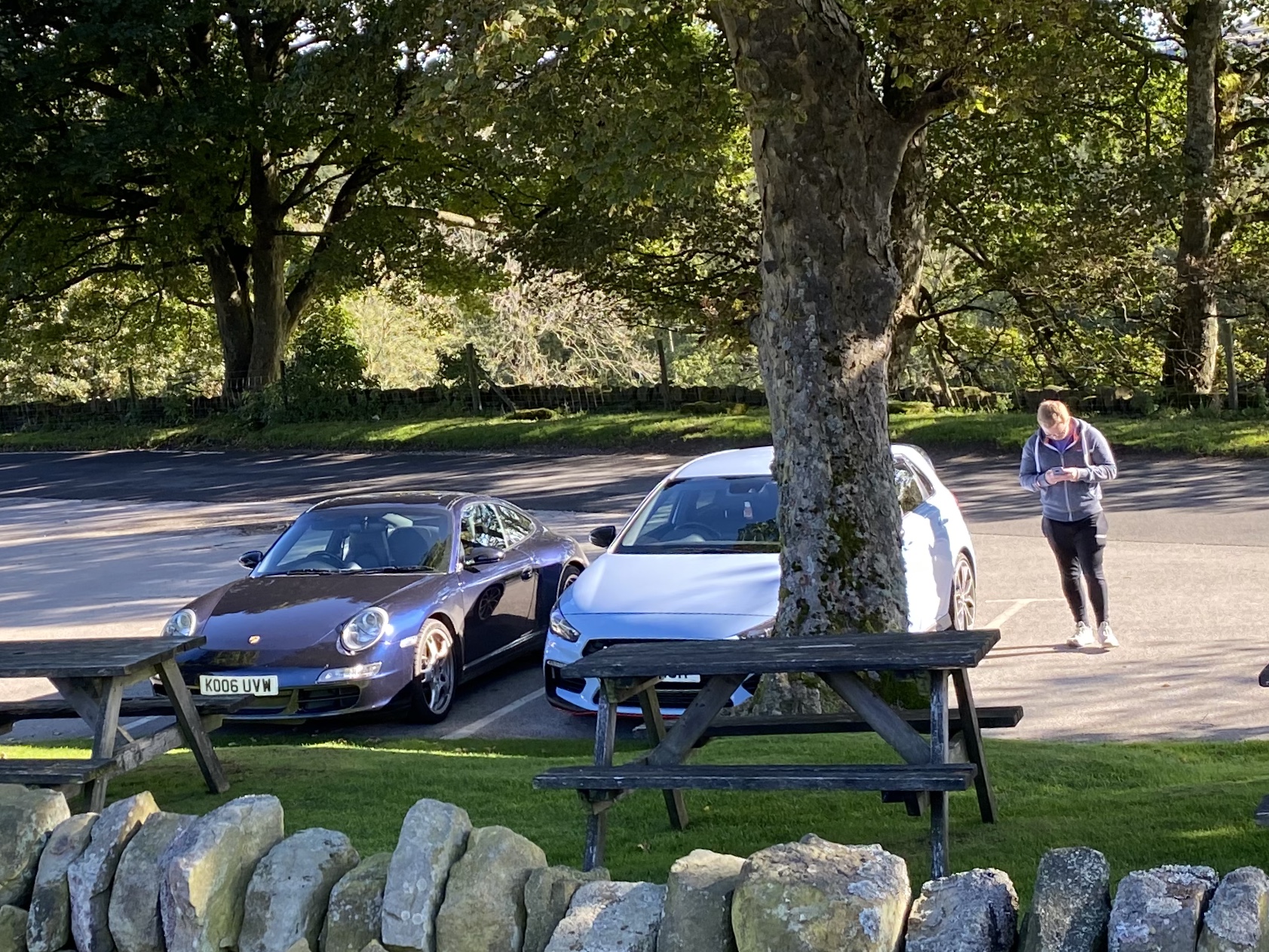 Its a base C2 in the worst colour combo with no service history and rust on the MOT history. Was £6k a bit toppy?
Click to expand...

You literally impregnate pigs for a living.

Steve_RS said:
Really nice that - cool as f**k interior. The only thing I can't get on with are the wheels, I'm not big on Porsches, assume they're not standard?
Click to expand...

They’re “Sport” optional wheels, same as the Gen 1 GT3. I was going to change them but cba till after winter. It doesn’t help the tyres are too small for them, it gives it a bit of a stretched look which doesn’t suit them at all.

The fact the tyres are date stamped 2013 should be why I change them, but the above is the actual reason

I can't deny I'd struggle with the whole "being slower than modern mid sized hot hatches" thing, but I'm sure it feels nice and authentic to drive.

Jason_E said:
You literally impregnate pigs for a living.
Click to expand...

Waitey said:
And your mom.

You're not really using gifs properly but ok

Louis said:
You're not really using gifs properly but ok
Click to expand...

Its only there to justifying spelling mum, mom.

''Your moooom'' in an American accent is more cutting than ''your mum'' in a British one.

Jeff simply said:
Good on you for just buying an old C2 and not chasing the models up and up until you just don't buy anything (I usually end up at the 991 GT3 and then shrug my shoulders)

I can't deny I'd struggle with the whole "being slower than modern mid sized hot hatches" thing, but I'm sure it feels nice and authentic to drive.
Click to expand...

I’ve never been a fan of the fast 4wd auto box crowd of hatches myself, but it’s something that concerned me also. I didn’t want “the dream” to be a let down.

I think the swap from a M2 Comp to a 2005 Clio 182 was a bit of an eye opener. I’d spent a few years in faster, newer stuff an it made me remember what I enjoy most about cars. I was having as much fun for a fraction of the cost, and 10-10ths wasn’t into death speeds.

Having said that, it still feels bloody quick. Way way quicker than the Boxster S I had before. Probably a lot to do with the added torque, that and revving it’s tits off is addictive.

ClioSport Club Member
Jim's rejects
I like. What you going to do with it? Other than put the lights on.

I watched a girl film a few years back, just friends I think it was called. The main guy in that hired one of these I think. But it had a massive spoiler etc. It looked ace. Liked this era of car, ever since.
I know nothing of them, what was the biggest bhp model they did in this shape?

Waitey said:
Its only there to justifying spelling mum, mom.

''Your moooom'' in an American accent is more cutting than ''your mum'' in a British one.

I love the interior, I dont know why though. Any more pictures?

Donny_Dog said:
I like. What you going to do with it? Other than put the lights on.

I watched a girl film a few years back, just friends I think it was called. The main guy in that hired one of these I think. But it had a massive spoiler etc. It looked ace. Liked this era of car, ever since.
I know nothing of them, what was the biggest bhp model they did in this shape?
Click to expand...

The turbo or GT2 probably. But they are the 996.2, even the 996.1 turbo had the facelift headlights before the 996.2 put them on across the range. With the headlights like mine it was probably the GT3? About 360bhp and it used the metzger engine, quite a beast they’re around £50k upwards. Your average C2 is anything from £12k- £18k for a Gen 1 (spec, mileage dependent etc).

The aero kit is the one thing I’d have really loved. Yes you can argue it’s “pretending” to be a GT3 but I just love it, it’s rediculous and matches the stupid interior. I’d probably remove the wing but keep the bumpers. It’s something I could add in the future.

It’s going to be mostly kept simple. New steering wheel and lights should be with me and ready by the weekend. I want to swap the wheels out but as we go into winter I’m in no rush! If I find any I have plenty of time to get them refurbed and a set of PS4s thrown on. If a set of the optional sports seats come up in the same colour I’ll crab them as the tombstones are NOT comfortable.

If I keep it long enough I’ll start looking into Bilsteins, adjustable coffin arms and a nice road setup perhaps. But as it is I just want to learn it a bit more, enjoy it in its “standard” state and improve where I feel I can.

ClioSport Club Member
a better one
Think you should go full CSR including ducktail.