ClioSport Club Member
Clio 172
I’m sure most will be relieved this is not another immobiliser issue thread. It is, however, a bit of an odd one.

Recently, the immobiliser red light in the centre of the dash clocks on my 172 has become “backlit” and dimly glows all the time. The light still flashes as it should when the car is off, locked etc. and goes through the correct sequence when starting the car, but stays dimly illuminated at all times. Photo and short video below as a picture paints a thousand words:- 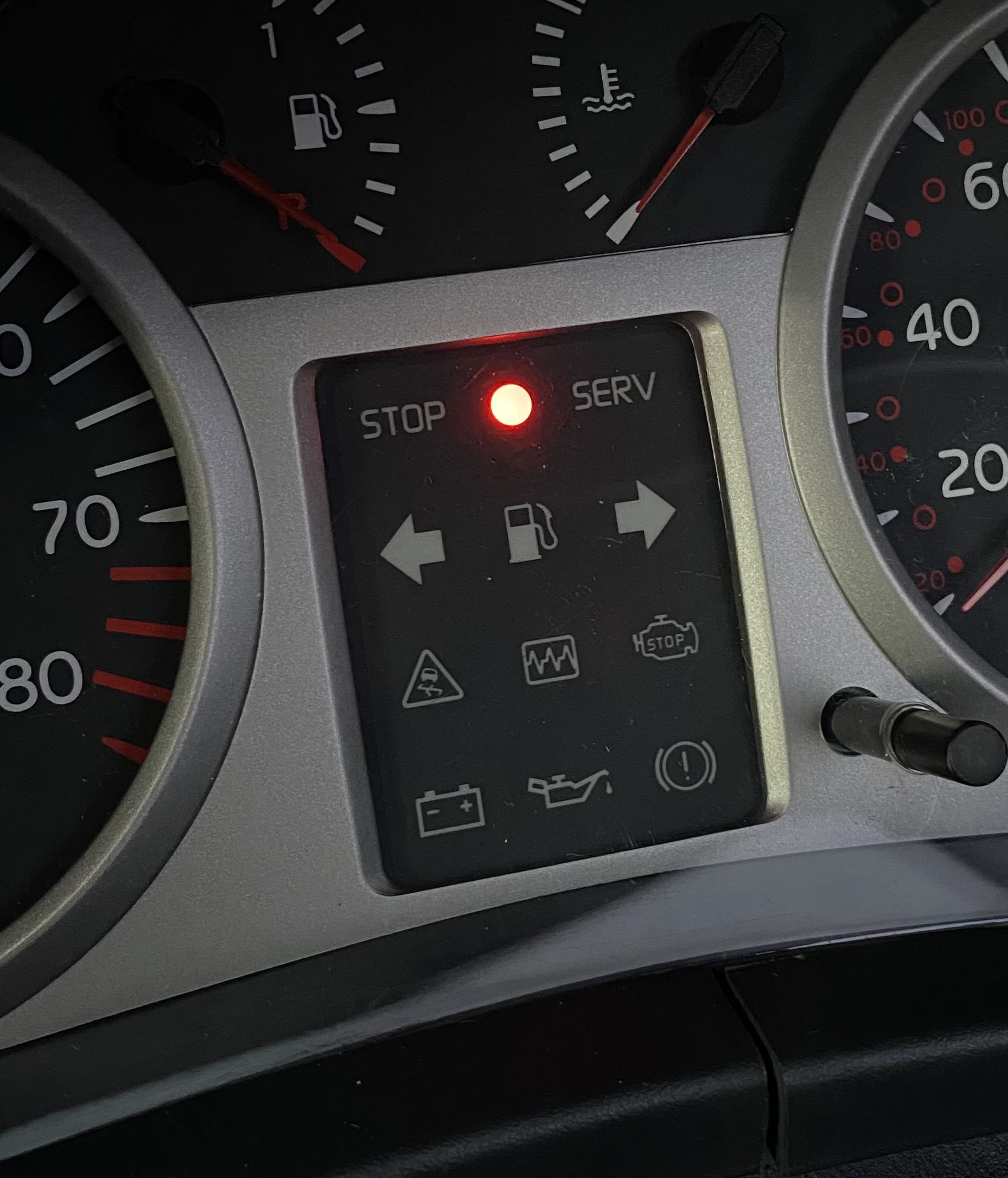 i’ve tried the following to resolve the issue:-

The car runs perfectly, has no immobiliser or starting issue and starts with both keys. The one odd thing was, when I took the car out yesterday and whilst driving the light disappeared for a short period of time, before coming back again and has stayed on again ever since.

So I now bow to the CS experts to see if anyone has an idea what this could be be how to resolve it.

Thanks for any help anyone can offer.

ClioSport Club Member
Titanium 182
I've never heard of that before

Sounds like you've tried everything tbh, even new clocks.

Only other thing I can think of is the earths under the dash top. Can't remember how many possibly 2 or 3. Definitely ones in the centre and one on the passenger side.

You'll see them if you take the top dash off and look for the single wires screwed to the dash bar.

Forgot all about the dash top earths, will need to have a look at them and see if there’s anything amiss with them.

ClioSport Club Member
Titanium 182
Done anything to the car that has coincided with it happening?

ClioSport Club Member
Clio 172
Literally nothing, just started out of the blue when I went out to the car one day the light was doing it, which again makes it all the stranger.…but it is a 19 year old french baguette so nothing really surprises me anymore.

ClioSport Club Member
Clio 172
Thanks to @JamesBryan reminding me about the dash top earths, so been out tonight and checked them. Even though they looked absoltules fine, I unbolted them, cleaned them clean and put them back together, but still no change unfortunately.

Even though I hate electrics and electronics, I attempted to decipher the wiring diagrams for the dash clock connector. It appeared the grey plug on the left is responsible for powering the immobiliser light (pins 4 & 5), so cracked out the multimeter again to see if there was anything funny going on with the voltages. Getting a good 12v at pins, so nothing seems to be amiss there either….but, as I said, I‘m no auto spark, so I‘m happy to be corrected on that.

No further forward really after tonight’s investigations, so open to any more suggestions anyone has.

Not got a clue

ClioSport Club Member
Clio 172
Done some more investigation into this and still at a bit of a loss.

Decided to strip the UCH out again and have a closer look at the circuit board as well as give it a good clean with contact cleaner. Didn’t make any difference…but, when I was putting the UCH back in the car, I noticed that when I connected the white plug to the UCH, the “backlighting” of the immobiliser light seemed to get brighter.

Then as I was getting up out the passenger footwell I hit the dash (unintentionally) at the fusebox and the “backlight” disappeared for a few seconds and then came back. Cue removing the fusebox & all fuses, giving it a good prod and poke, as well as a dousing in contact cleaner, but i couldn’t make the light go away again and there was no obvious issues with the wiring behind the fusebox either.

Therefore, I’m now thinking it could be a UCH and/or wiring issue, but I’m well out of my depth when it comes to wiring, even lost hours looking at the various wiring diagrams trying to make sense of them, but no Joy.

ClioSport Club Member
Clio 172
@Louis that’s exactly what it seeme like tbh, but having checked and cleaned all the earths I know of, it has made no difference, hence why I had gone to looking further into the wiring/UCH/fusebox. That said, if anyone knows any other earths related to the UCH/fusebox/dash clocks etc. then please point them out and I’ll see if I can have a look and check them.

ClioSport Club Member
Titanium 182
It's probably something in the dash loom by the sound of it.

ClioSport Club Member
Clio 172
Cheer James, didn’t even see that list in amongst all the manuals I’ve got downloaded. I’ll try and cross reference these to the diagrams and see if there’s any of the relevant ones I haven’t check checked yet.

ClioSport Club Member
BG 182
It doesn't have an aftermarket wheel on does it?

clio_ross said:
Cheer James, didn’t even see that list in amongst all the manuals I’ve got downloaded. I’ll try and cross reference these to the diagrams and see if there’s any of the relevant ones I haven’t check checked yet.
Click to expand...

I'm not sure where it's from in any of the manuals, but i just saw it posted on here after a quick search.

ClioSport Club Member
Clio 172
@JamesBryan it looks like it’s an annotated version of the list contained with this wiring diagram I’ve attached.

@Louis i do have an OMP when fitted, but it’s been on there for 4 years and i‘ve had all the airbags in the car properly deactivated via the airbag ecu (so no resistors required) and it’s an early ph2 172 so doesn’t have cruise or traction control, so no steering angle sensor or extra wiring to worry about.

clio_ross said:
@JamesBryan it looks like it’s an annotated version of the list contained with this wiring diagram I’ve attached.

@Louis i do have an OMP when fitted, but it’s been on there for 4 years and i‘ve had all the airbags in the car properly deactivated via the airbag ecu (so no resistors required) and it’s an early ph2 172 so doesn’t have cruise or traction control, so no steering angle sensor or extra wiring to worry about.
Click to expand...

I'm more thinking about the earthing from the horn if anything odd has happened? Itd be lower end of the solutions but worth a gander. The wiring can often burn out

ClioSport Club Member
Clio 172
I‘ll have a look and see if there is anything obvious with horn wiring. I run a phase 1 type stalk, so i don’t have to have the horn wiring running to the centre push button on the wheel, to try and avoid any issues like squib shorting out, but as you say, worth a look.

ClioSport Club Member
Clio 172
Just to update this thread for the time being. Checked the horn wiring as Louis suggested, but all seemed fine.

So with the light annoying me, and tbh being a bit of a distraction whilst out on the road, I managed to find a pin diagram for ph2 UCH connectors (buried in the depth of CS), which showed the output wire for immobiliser dash light as being pin 5 on the brown section of the P201 connector (big 40 pin connector to the UCH). Depinned this and light gone. Bit of heat shrink over the end of the pin to protect it and tied the wire back out of harms way.

This leads me to believe there is either a fault/short in the UCH circuit board and/or an issue with this wire from pin 5 of the plug to the dashboard plug, so if I’m inclined I’ll do some more investigation in the future, but at least it’s resolved temporarily.
You must log in or register to reply here.

Killed something in my electrics - 3 second cranking limit

T
Jerking and lack of power in low gear