I hope to b there, but in the Fiesta.... Clio is doin too many miles at the mo, has 2 bald rear tyres, and the spare on the front lol.

Pics of Fez here so u know it: http://www.fiestaturbo.com/phpBB/viewtopic.php?t=27428

also a pic of my Clio on there too

hope to c u all at Southend 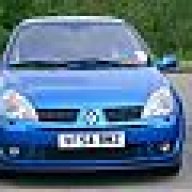 Hi Louise me and ben are driving up from cardiff if u wanna meet up with us first.

Be nice to see you again Lou. Bring the Willy!!!! No-one will notice you if you come in the Fez, theyre so common up and down the seafront!
B

you show us yur willy and well show u ours!!

Hmm, ur tempting me to bring the Willy!!! Is it gonna get laughed at with a steel wheel though? as I cant really afford a tyre at the mo...
B

Its a Cliosport event! You cant bring a Fiesta to that!

Is that ur real plate or a show plate?

I mite be down in the evening, im out to the cinema first in chelmsford but will probably pop down b4 12.

C u guys there

Right, today I went into town and got shafted for 4 new tyres, so Ill b there without the steely
N

Ben - look closely and it says fastest 16v, not fastest Clio. Mats is now a 2.0 so it holds the 2.0/Williams record. Watch this space though. The overall Clio title will be mine...all mine.
B

Ahhhh...I see Mr Read...we have vays of making you go faster...How about the oil slick maker option? Or the exhaust tailpipe guns? Just in case that swine Mat Brown has the cheek to try and overtake??!

In that case, it makes me feel better about a duel that myself and Mat had the other week. As you know, mines still a 1.8.

We pulled side by side at 70 and accelerated from that speed upwards twice. I beat him both times on the initial acceleration, but he claims he was in a lower gear!! (though he did have a passenger). But as soon as we were up to 90+ hed just pull like a train, just when I started running out of puff!
B

Ill be in Lous car....... the clio, not the fez, and as for the fez not getting any looks at the sea front you couldnt be further from the truth!!!! Me and Lou got more looks in that than any other car ive been in down there lol