So i Have taken the plunge and started to build a 172 Kangoo,

This originally came from driving around treating my current car more as a van than a car and a van probably being more useful to me day to day....started looking at vw caddy's and similar couldn't believe how little my budget would actually stretch too with vans in general (200k mile snotters was very much the theme) went to players classic a couple of months ago and saw a little white kangoo...seems odd to be here...looked under the bonnet, started chuckling to myself this is the solution to my problem, got home straight on google looking for info on the said conversion, ended up looking at some of the build threads here, the hunt for suitable donors started....

a few weeks later found and bought this, bit of an oddball in that its a 1.6 petrol auto, but most importantly had A/C and as a bonus the plastic flap in the roof for carrying longer things (or rudimentary aero device) 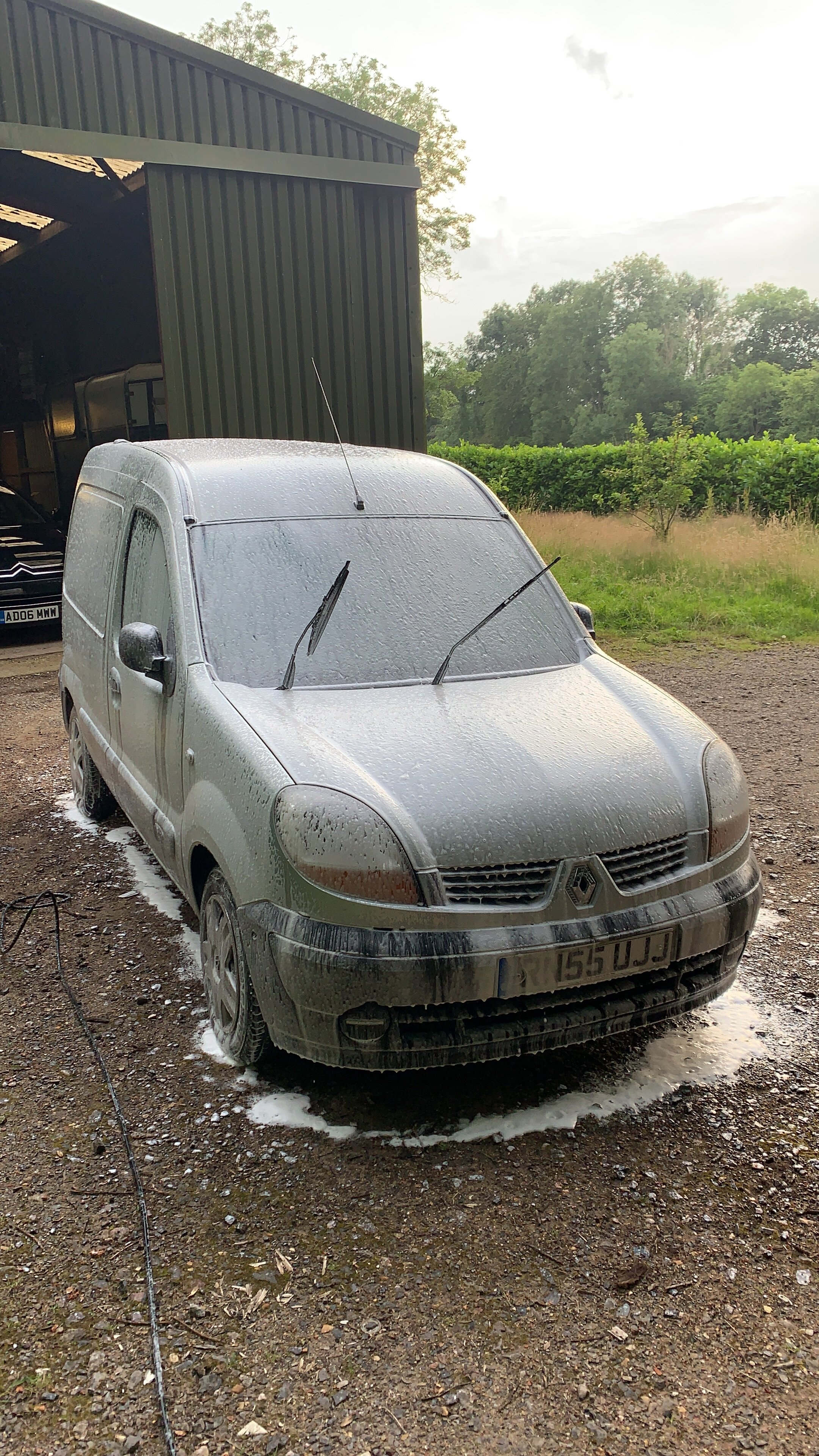 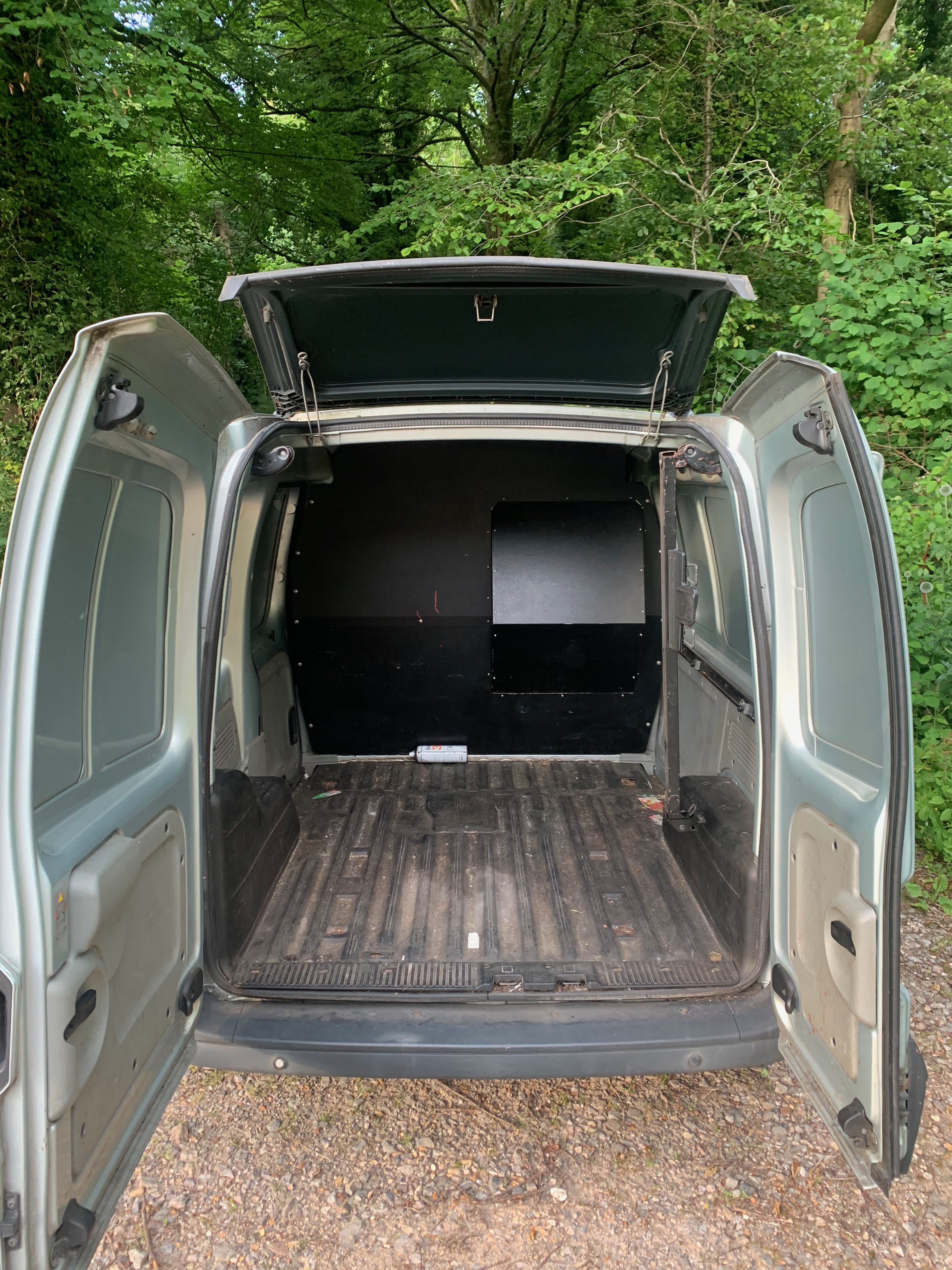 Also a non runner due to an immobiliser fault, overall no rot but in need of a bit of bodywork on the drivers side but nothing major.

The hunt then turned to a clio, a couple of weeks later picked this up 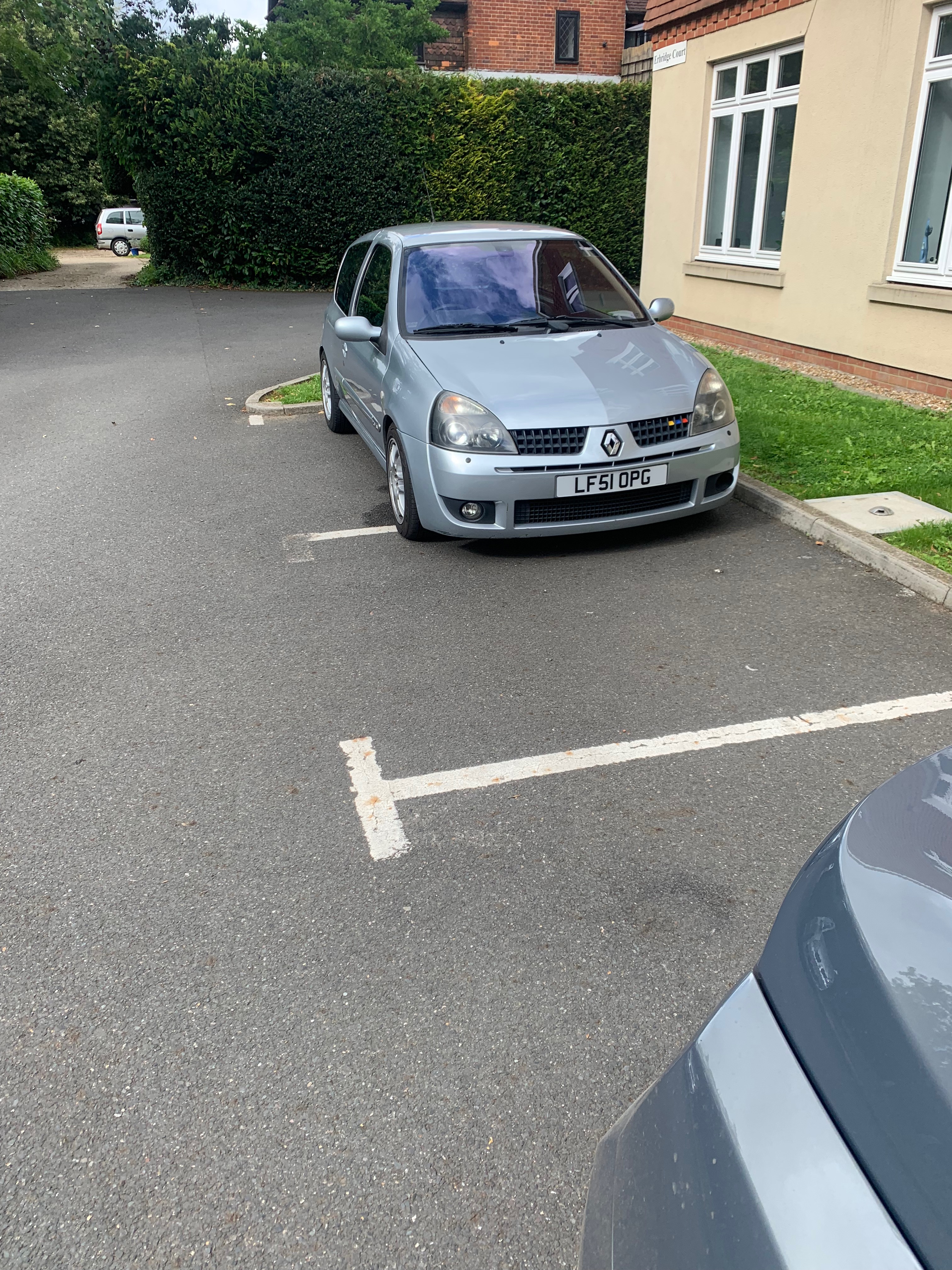 drove it home, what a thing! a mate had a 182 trophy a few years back, and another mate had a ff, i don't remember them being this fun though! this one has some trick bits (coilers, sports cat and exhaust) which will come in handy, the car itself is unfortunately good and rotten 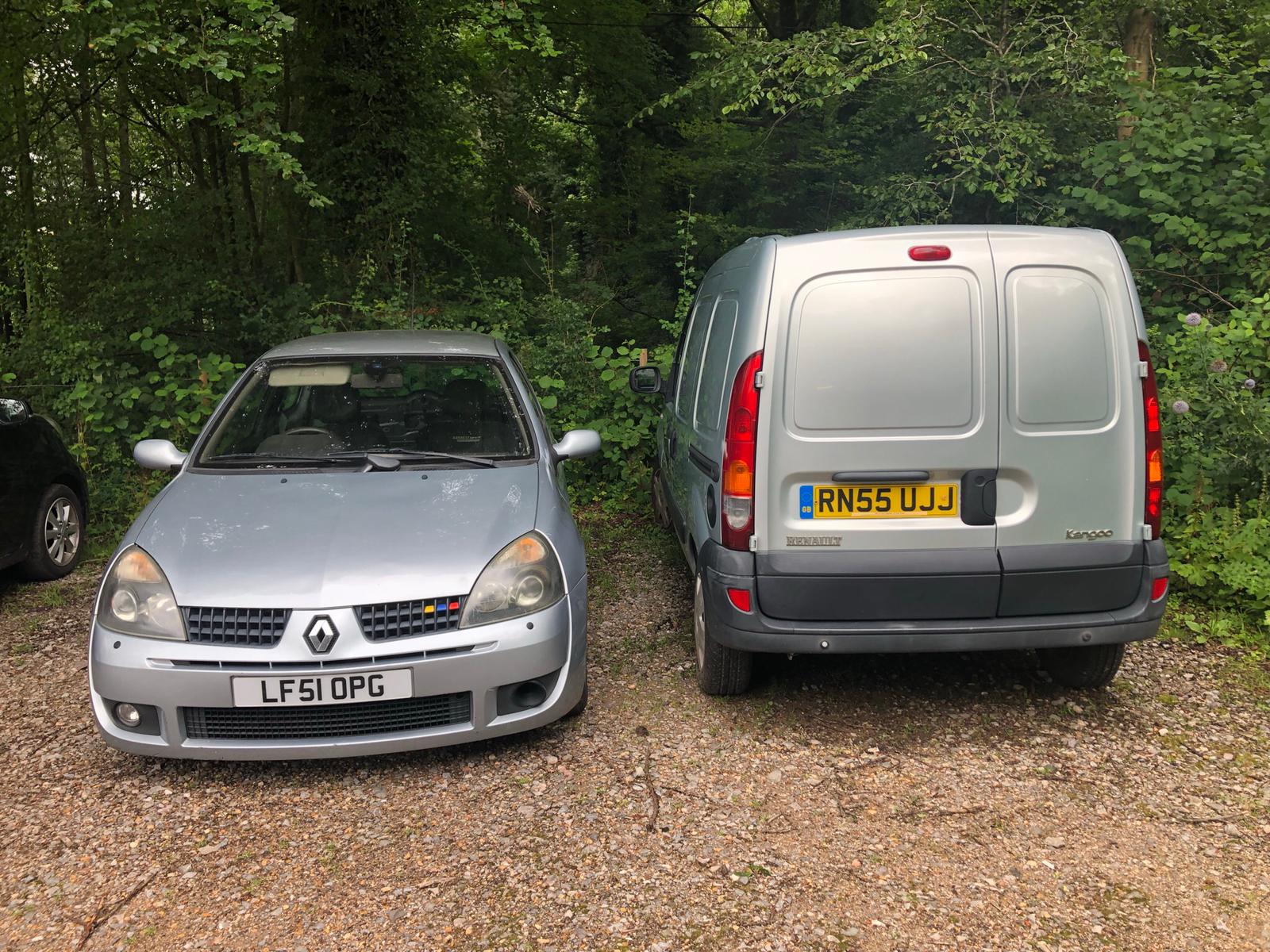 when two become one and all that jazz

started on monday stripping the kangoo out first, 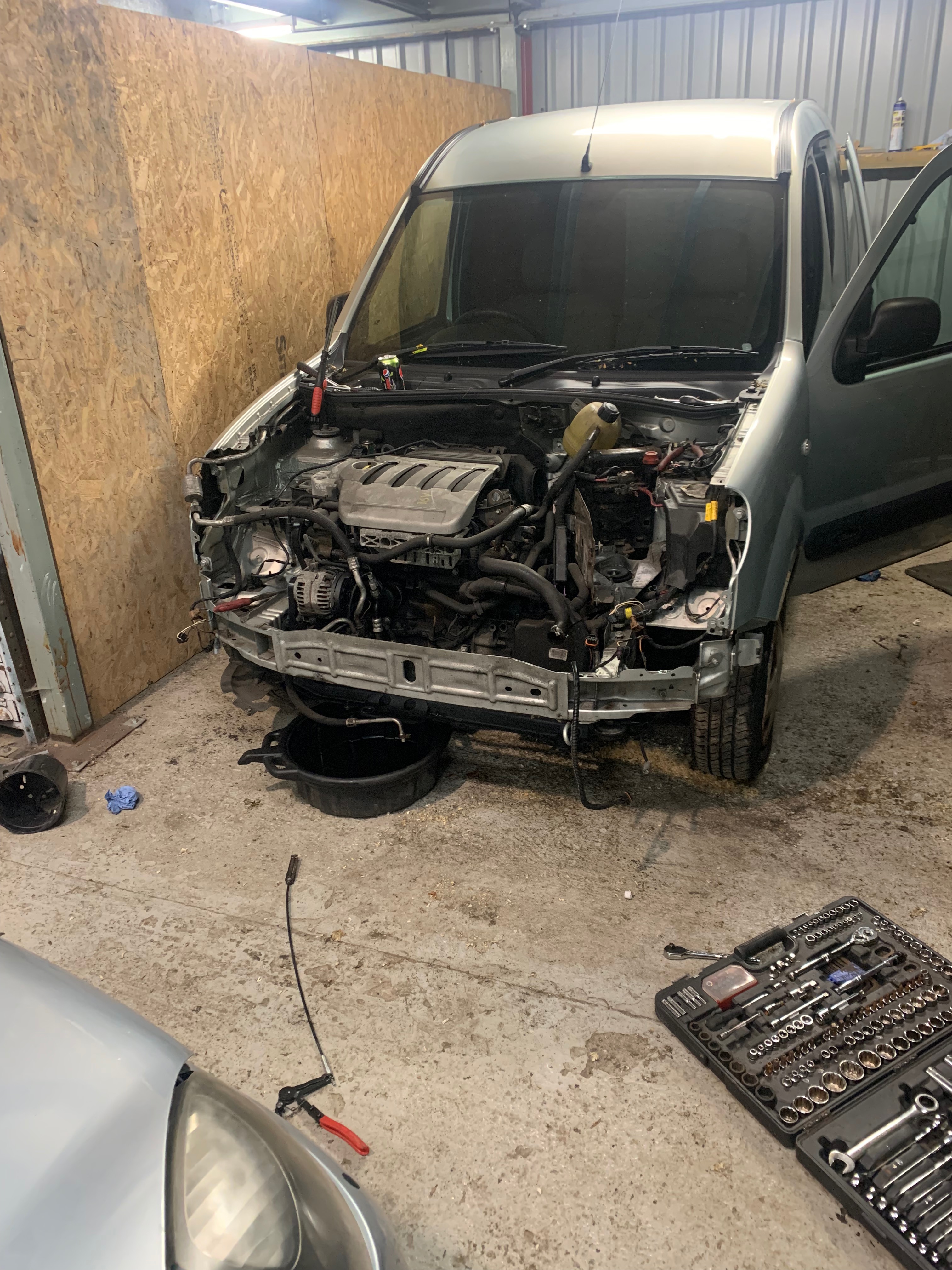 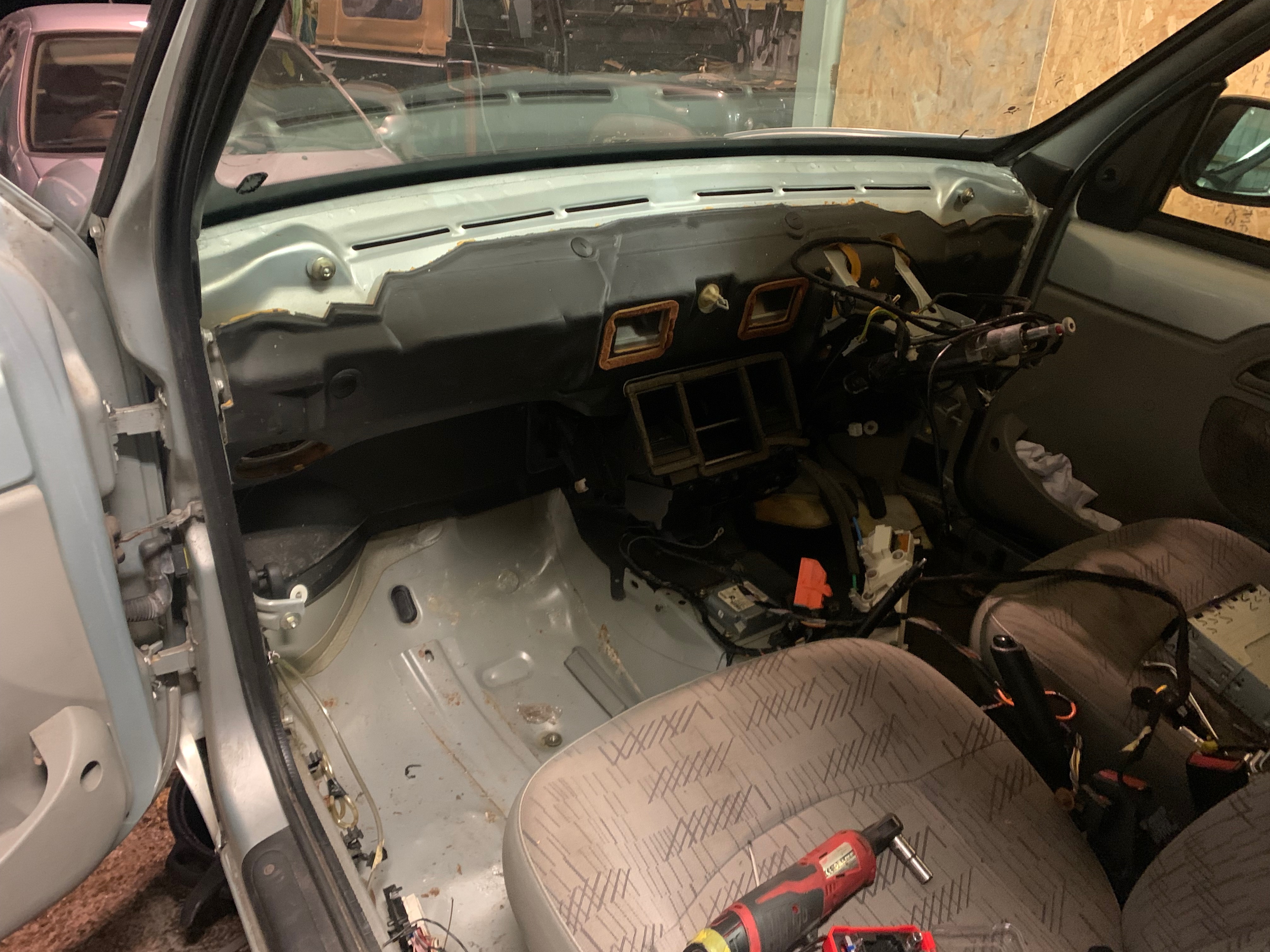 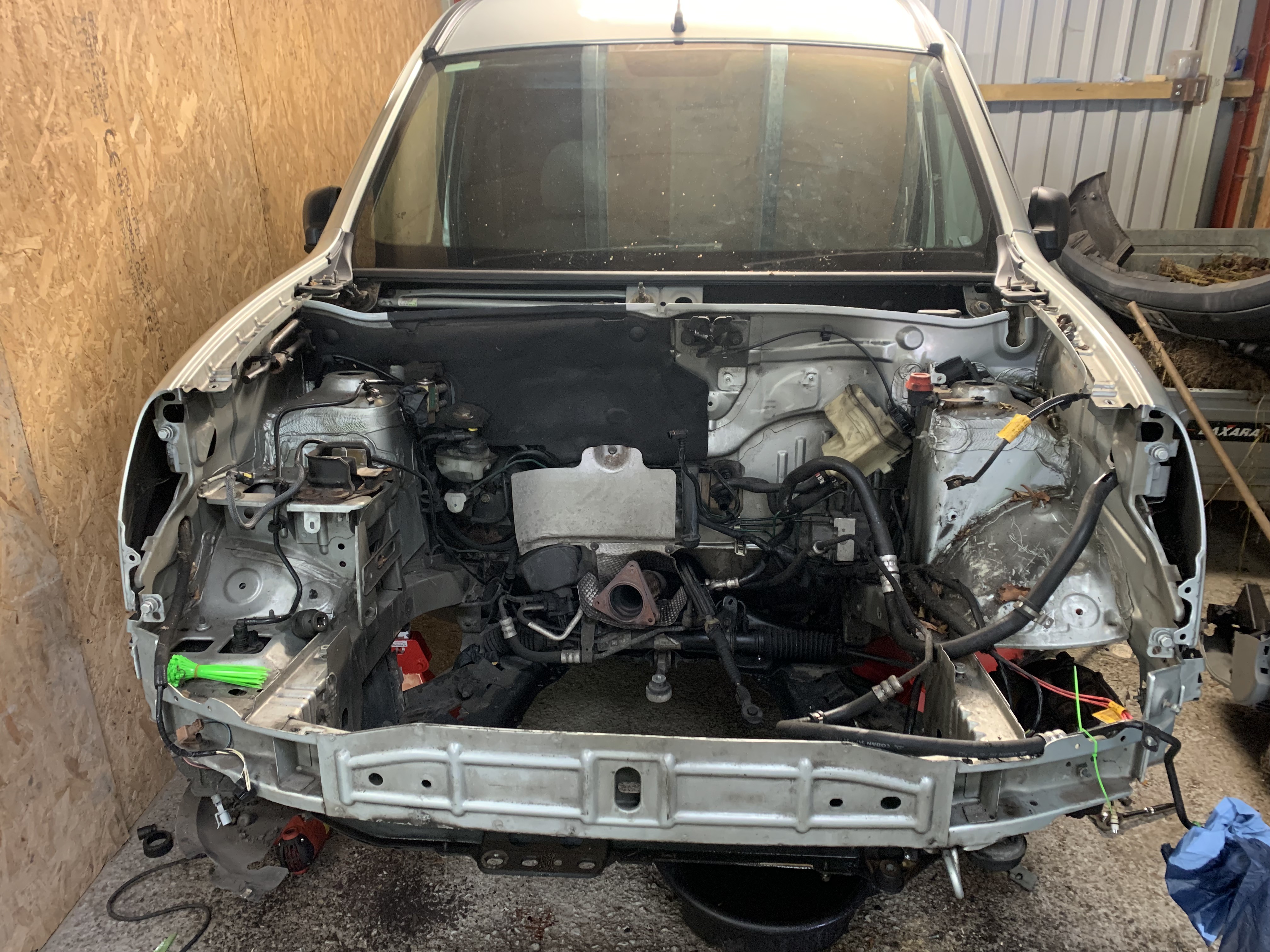 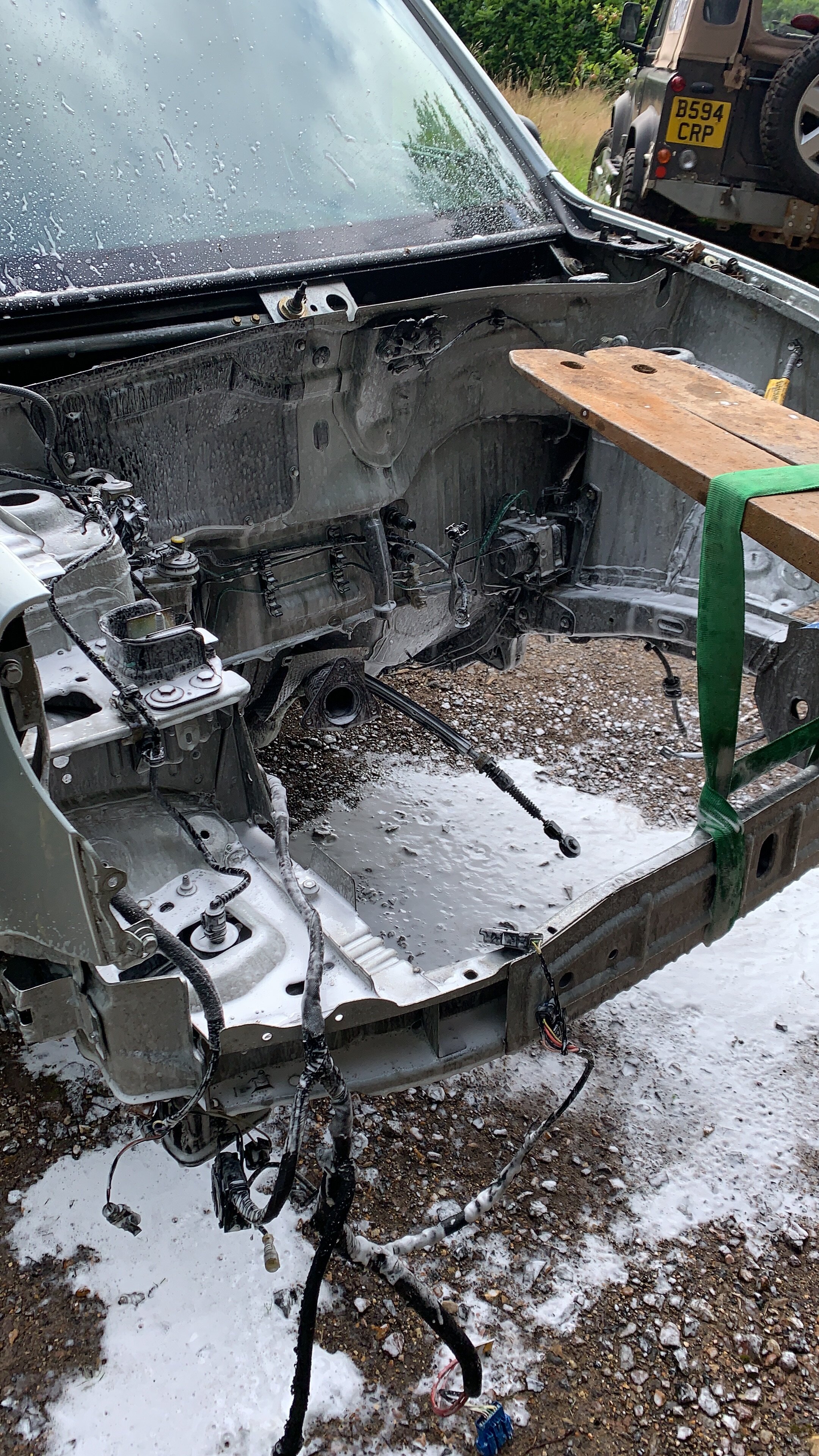 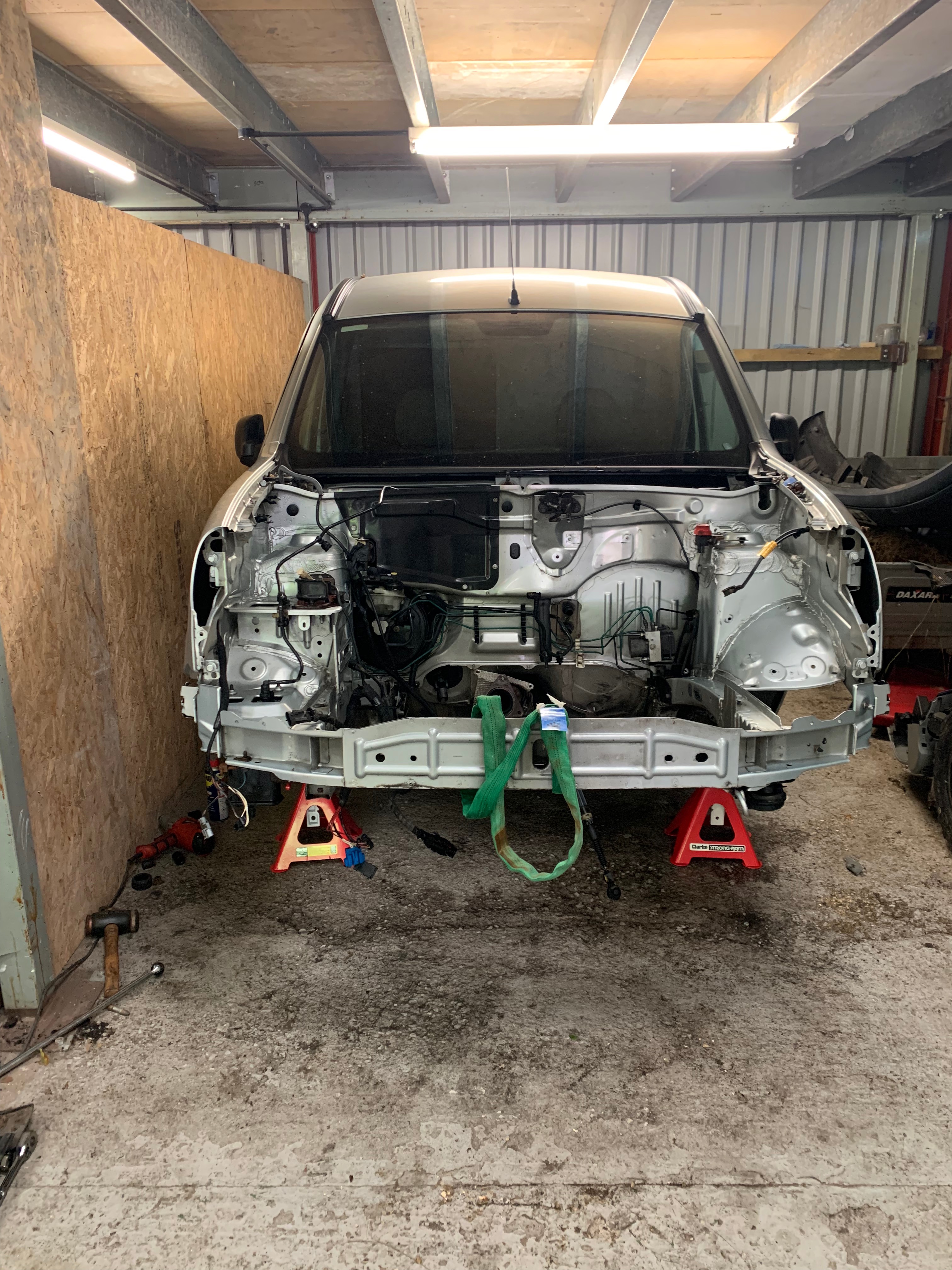 The van back in situe, have since removed the medal box and exhaust, this is progress up until now, next up to break the clio, i presume i am using all the bits that would be of use to anyone on here but if anyone spies any bits that might be of use to them let me know!

ClioSport Club Member
2 Classic Minis, 182
You can probably sell the wings, bumpers and side skirts off the clio quite easily.

Good luck. A mate of mine done the conversion a few years back using my old clio as the donor. They are a surprisingly easy conversion, the elective are the biggest problem but not that difficult.

You have one less issue with the petrol tank being ready to go vs a diesel van. Although I’m not sure how much of a direct swap the clio pedals are.
M

ClioSport Club Member
Kangoo
Thanks, yes hoping having a petrol van means a couple less jobs! I believe the pedal box moves across, but only from what I have read on here previously, we shall see!

Anyway I actually had a weekend off for once so no progress over the weekend, managed to make a start stripping the clio on friday though 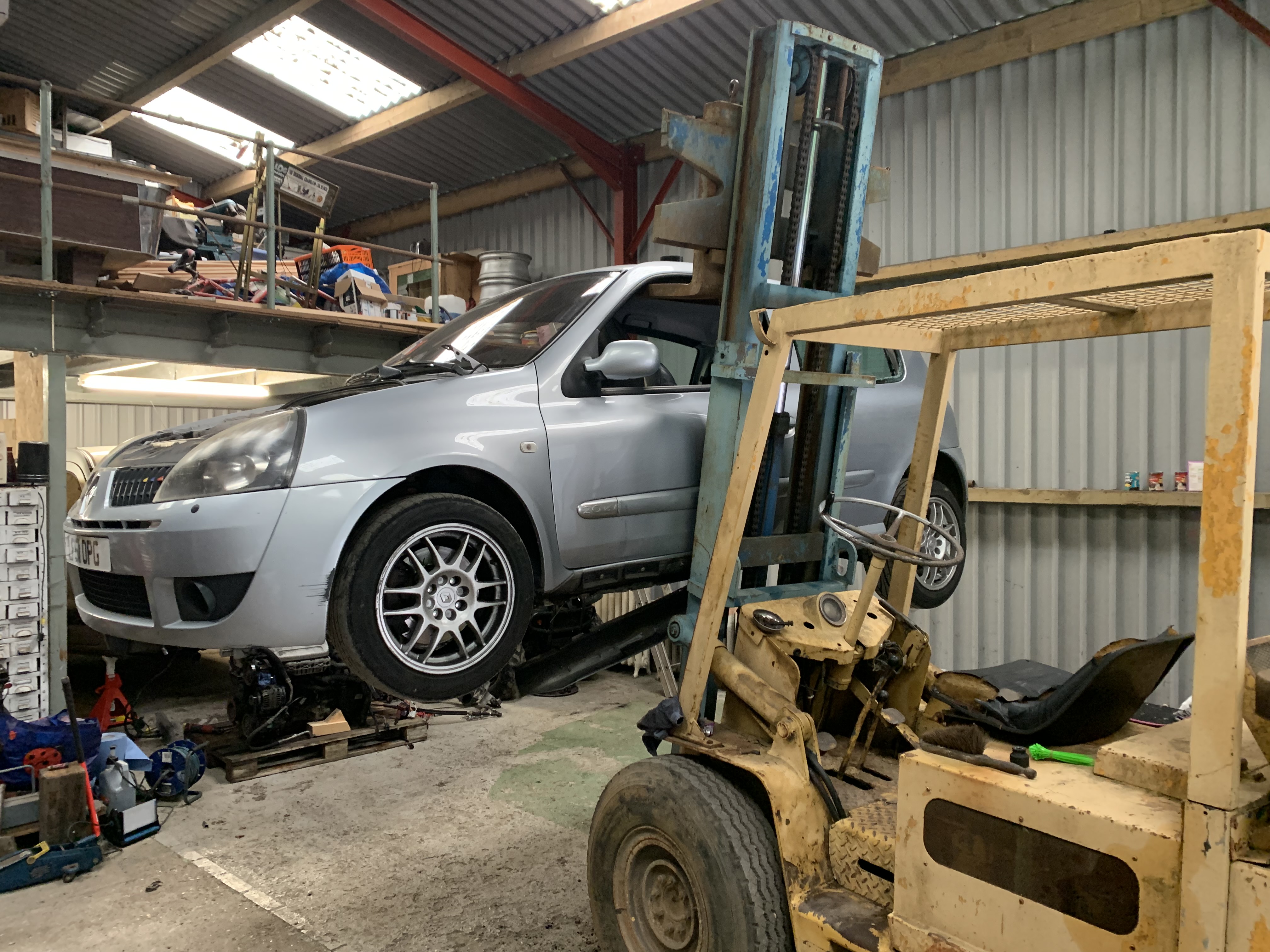 On the hillbilly car lift 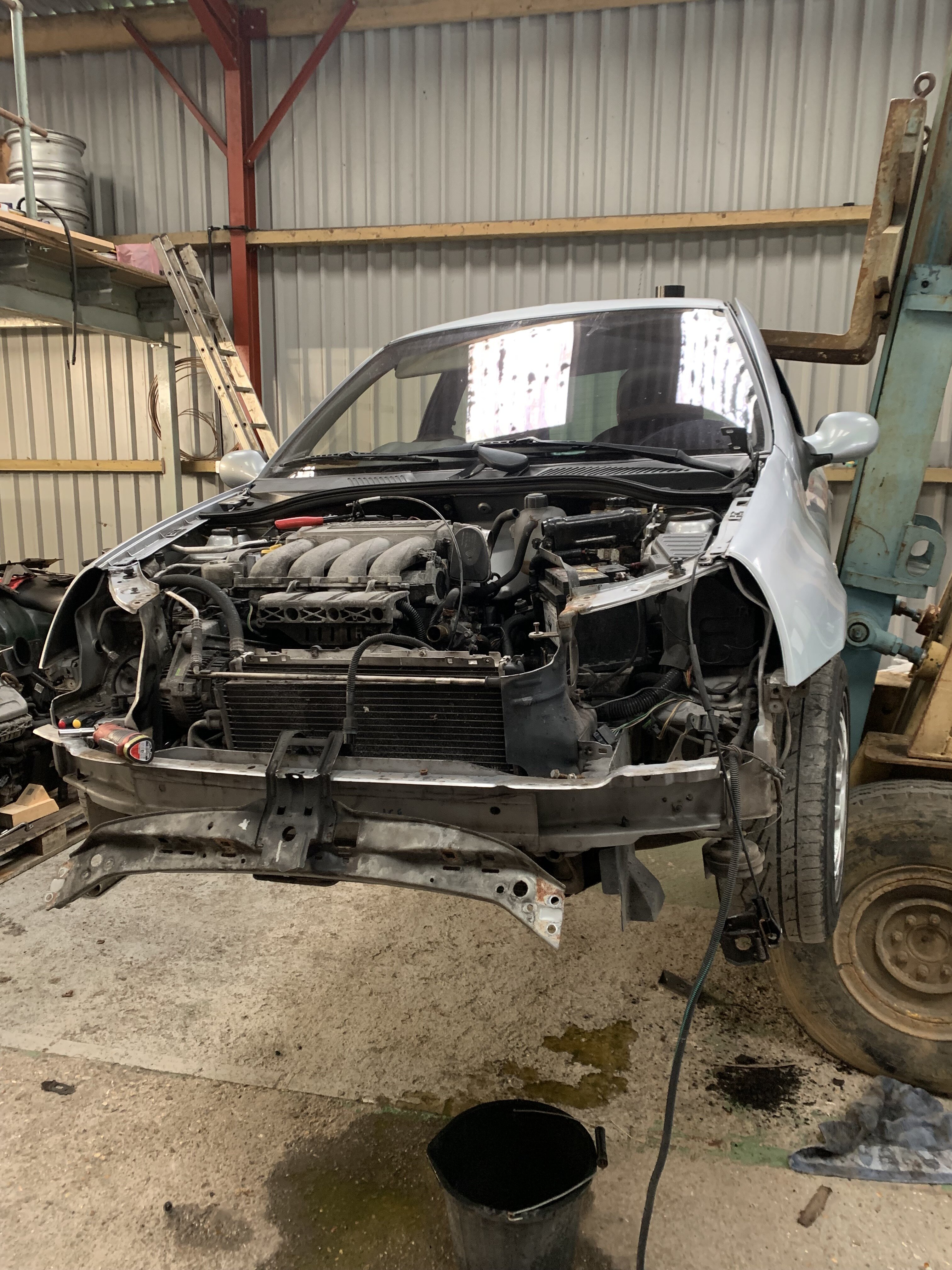 With its face removed and drained of fluids

Managed to get the dash out too, looks like previous owners have been in there has a (what was probably expensive back in the day) aftermarket alarm which i need to work out how to remove! and also the red and black wires in the steering wheel (anyone know what these do?) have been cut. will try and carry on with the teardown after work tonight!
M

ClioSport Club Member
Kangoo
Managed to move it along a little more in the last couple of days, the square hole for the main electrical connector has been transplanted from the clio to the kangoo, interior loom has been moved across too, this has thrown up a couple of bits, the two door plugs are different so i guess the pins need swapping from the clio type door plugs to the kangoo door plugs (I'm sure I read somewhere these were plug and play but oh well!) and then the main loom that runs down the passenger sill has male pins on the clio dash loom and the kangoo loom that goes to the rear of the car, is the norm to make up an adapter plug or just re pin one of the plugs with female pins?

Also managed to get the alarm system out of the loom (hopefully!!) what a lot of faff for what was ultimately a system that re joined two wires via a control box! well at least hopefully anyway!

clio now has the engine basically ready to be removed, pulled all of the front hubs struts and driveshafts so i guess that's the next job as the lack of pedal box is what's stopping the dash in the kangoo going back in
M

ClioSport Club Member
Kangoo
So managed to get on a little over the weekend, 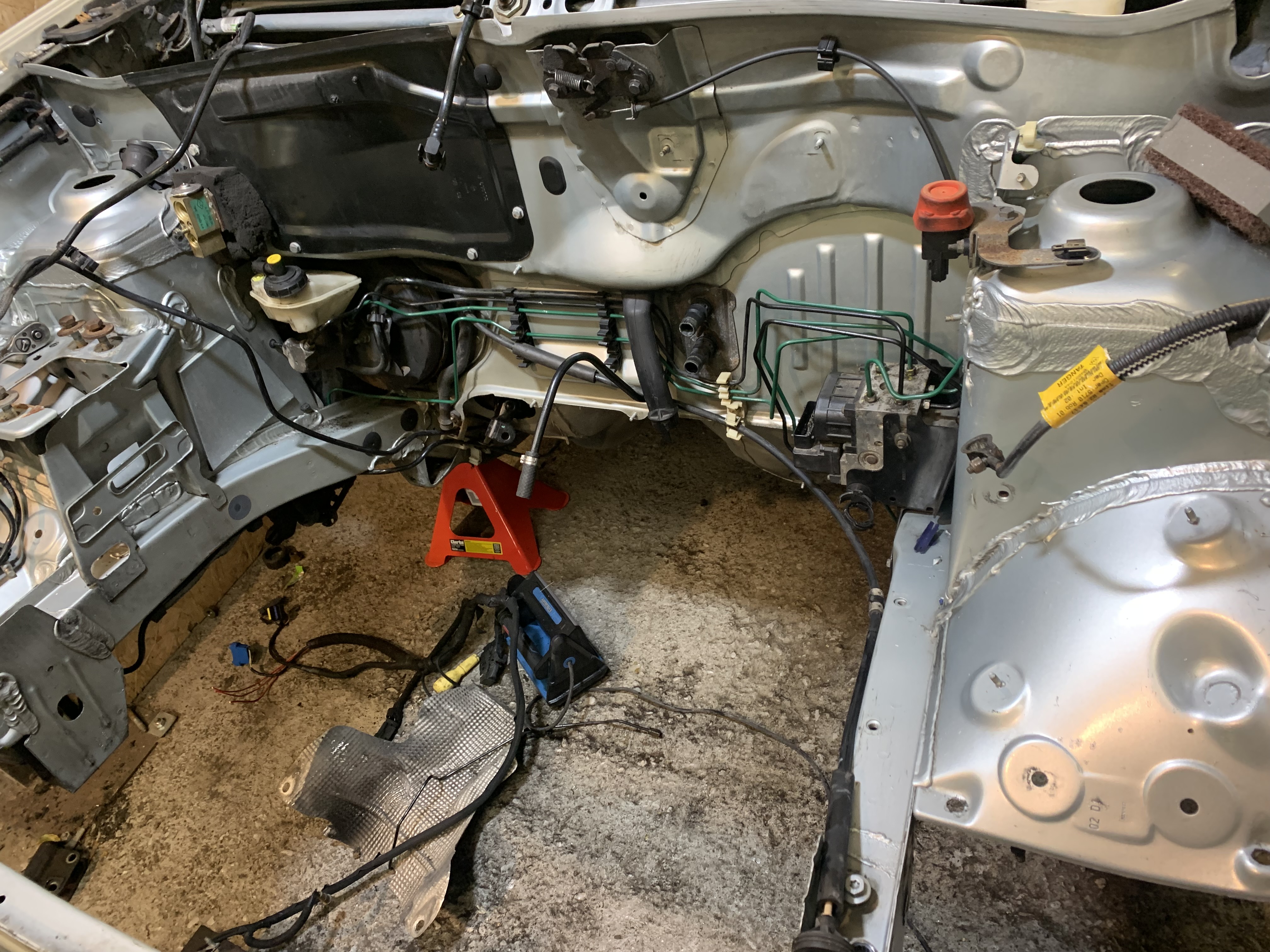 now has the correct number of pedals. abs pump and servo from the clio installed 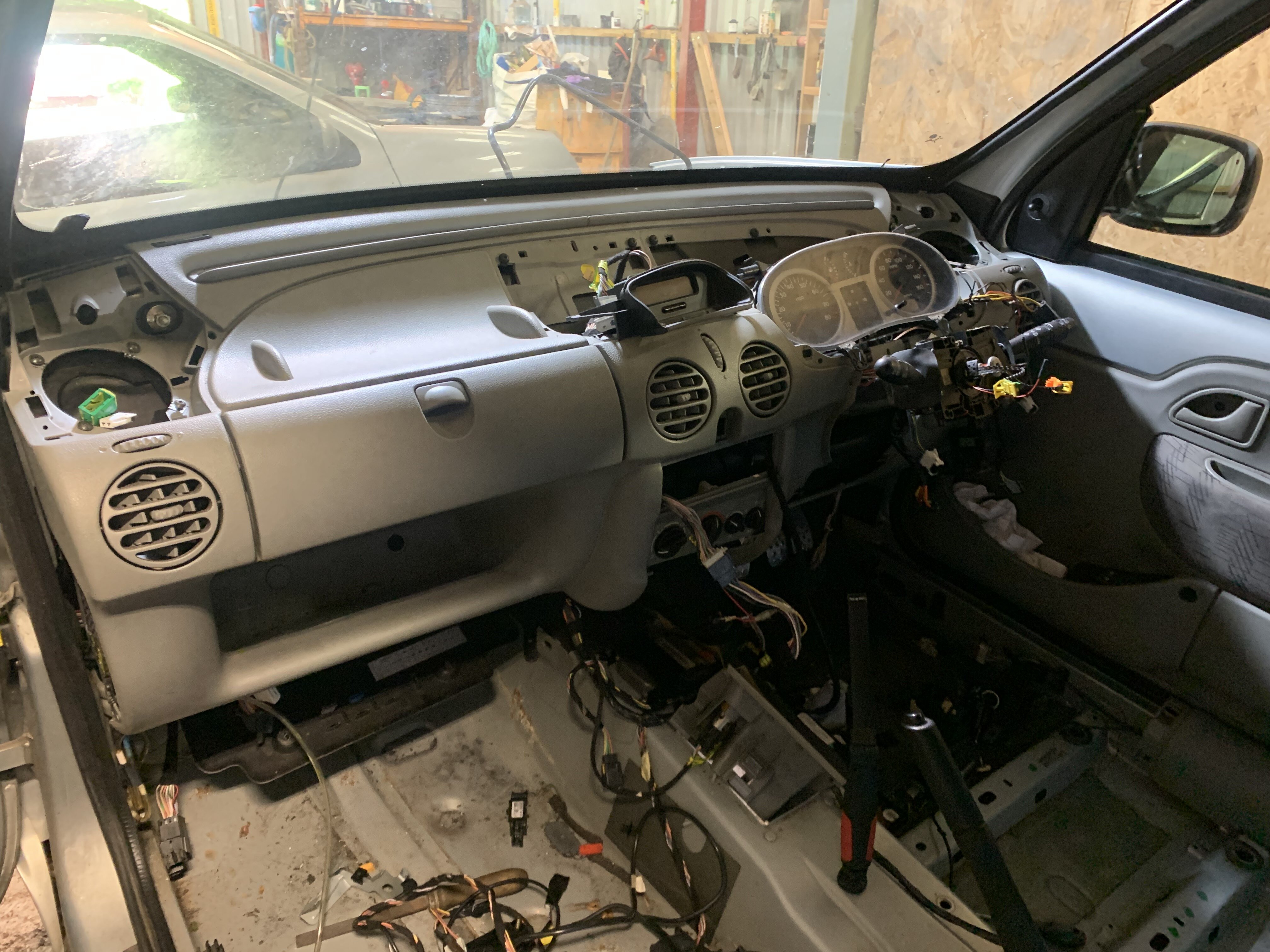 The clio loom is now all in and behind the kangoo dash, went to rebuild the clio clocks to use the kangoo mounting positions, looks like i need a ph1 or early kangoo clock set to have the correct dial surrounds 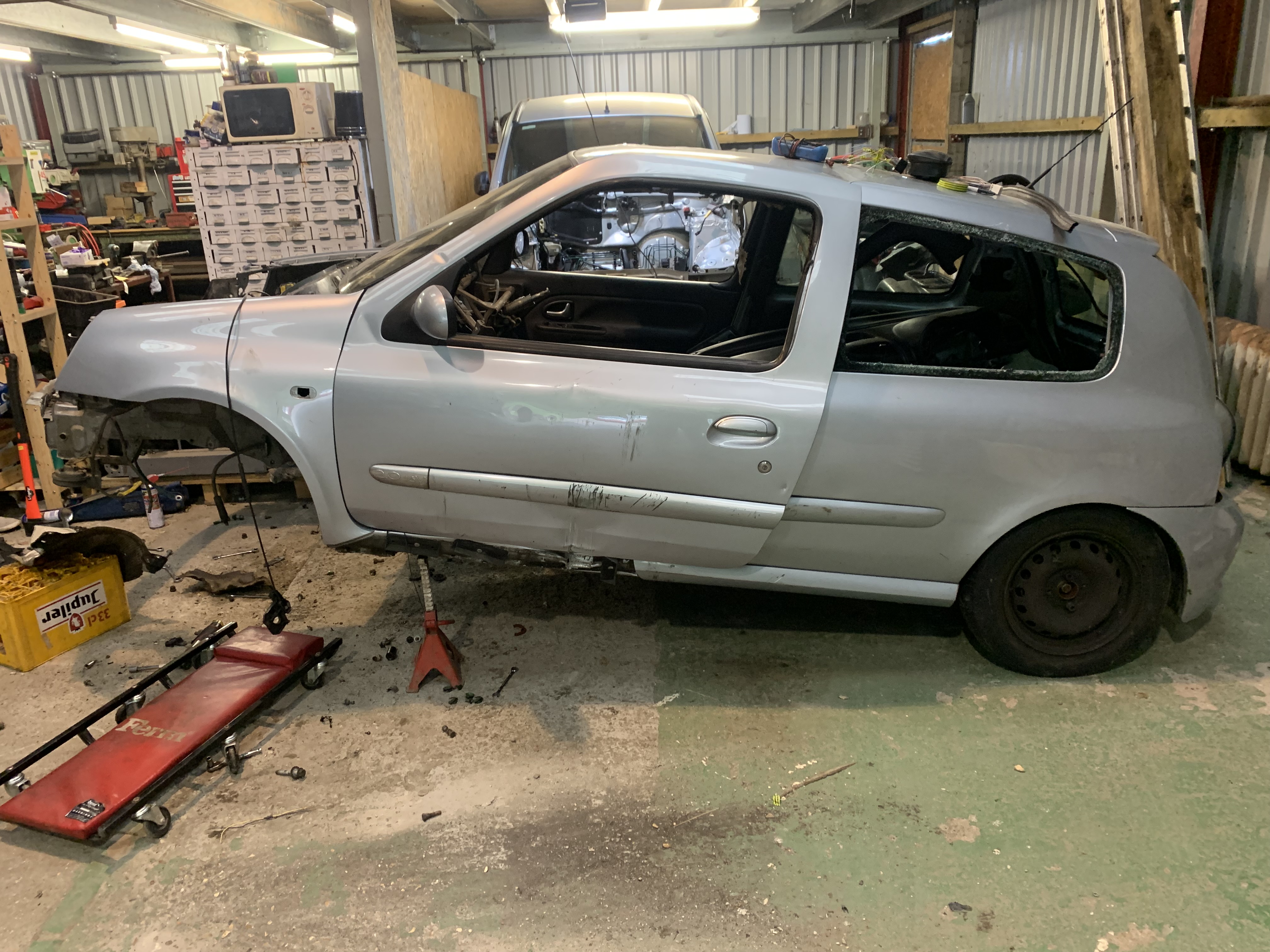 clio now looking pretty sorry for itself, need to strip the rear hubs at some point then its ready to go to the scrappy, foolishly cut the loom to the rear (the correct side of the plug without realising the clio uses the same colour for a few different things, does anyone have the pin outs for the black connector that is at the front of the passenger side sill? and even better if anyone has the pinouts for the kangoo loom to make a patch lead from?

Next job is get the engine and box cleaned up and find someone who will do the cambelt on a loose engine any recommendations in the portsmouth/southampton area?

clio
Amazing work looking forward to seeing it finished. Fancied one of these myself. I did see one for sale but was snapped up quick and is going to be given to a members son I believe.
M

ClioSport Club Member
Kangoo
so somewhat delayed update, been getting on with it when i have a few minutes at the expense of adding updates... 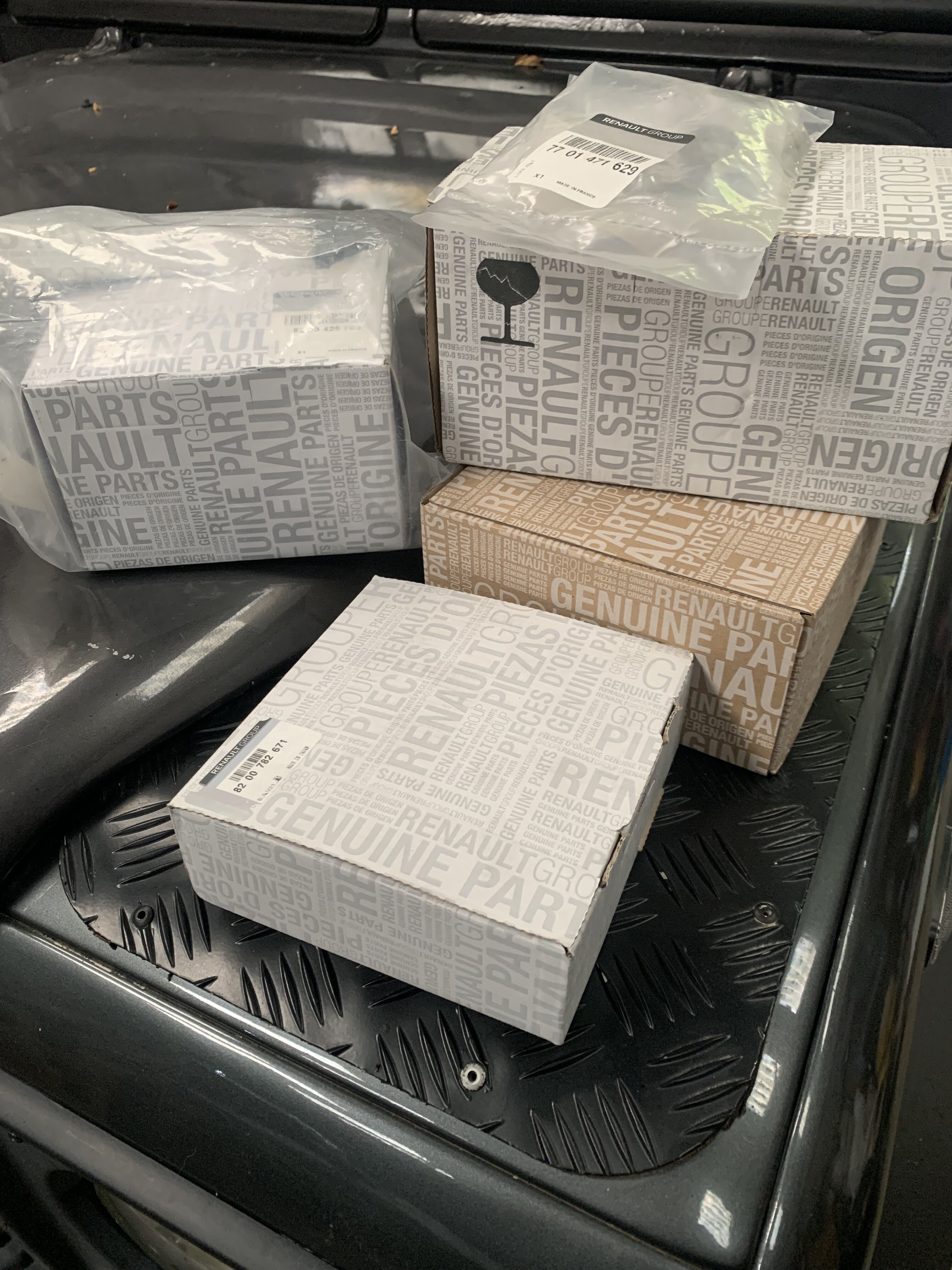 Nice pile of cambelt goodies, loaded up the land rover with the engine and took it over to the clio man, as per recommendations. Gary was great and has built a few of these vans himself too! 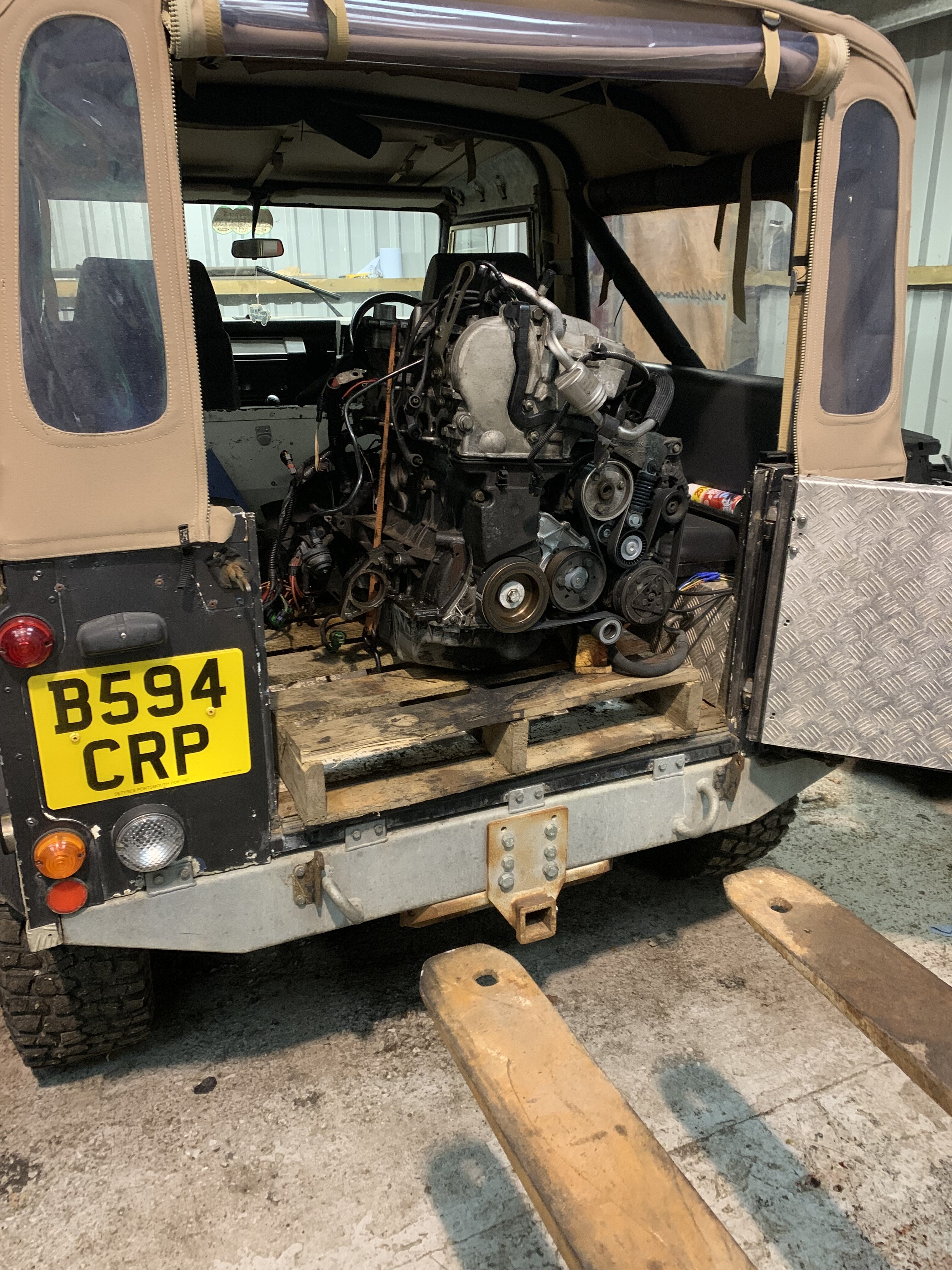 came back, and with some new found enthusiasm started putting it all back together 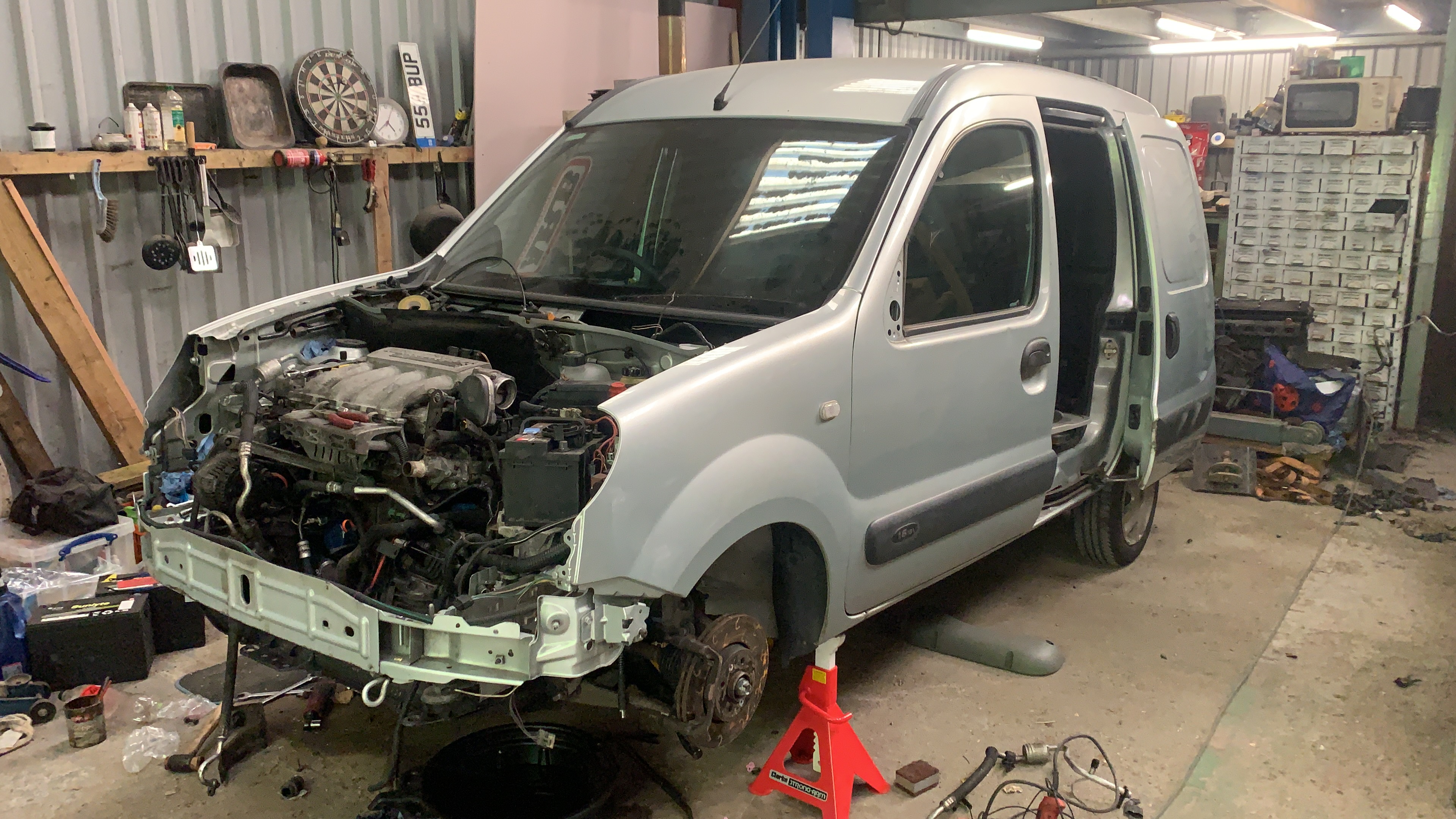 Engine in, started going through the wiring between the clio and kangoo looms, something of a headache but i had expected that!

Finally put some power to it nothing especially untoward, go to turn the key...nothing...

looked around everywhere and found an earth on top of the gearbox not attached, attached that and it fired straight up! excellent! cooling system all needs to go in next, then the main big jobs to do are tidy up the wiring rear brakes and make up an exhaust.
R

minimental said:
so somewhat delayed update, been getting on with it when i have a few minutes at the expense of adding updates...

View attachment 1559528
Nice pile of cambelt goodies, loaded up the land rover with the engine and took it over to the clio man, as per recommendations. Gary was great and has built a few of these vans himself too!
View attachment 1559530
came back, and with some new found enthusiasm started putting it all back together
View attachment 1559531
Engine in, started going through the wiring between the clio and kangoo looms, something of a headache but i had expected that!

Finally put some power to it nothing especially untoward, go to turn the key...nothing...

looked around everywhere and found an earth on top of the gearbox not attached, attached that and it fired straight up! excellent! cooling system all needs to go in next, then the main big jobs to do are tidy up the wiring rear brakes and make up an exhaust.
Click to expand...

ClioSport Club Member
Kangoo
Do it!

I have high hopes for it, if its anything like as good as the clio donor it should be great, and also be more useful to me than a car! also been pleasantly surprised by how straightforward a swap it has been so far!
M

ClioSport Club Member
Kangoo
So did some more bits on it last night, went to put the coilovers that were on the clio on it, they appear to be for a 182 trophy or similar as the bolt spacing is not right, and also the holes appear to be for 12mm bolts, more worryingly the previous owner seems to have "made" them fit by modifying the bolts (read gashing one of them down until it fitted) so i think i may revert back to stock suspension struts, annoyingly i was hoping to not spend too much more on this project straight away, will bits like spring retainers, nuts and bump stops from the kangoo struts fit some new 1*2 struts or is it all completely different, sounds tight but bits like that add best part of another £100 on top of struts and springs, if not i guess i will hunt for a good used set for now to get the thing moving!
M

ClioSport Club Member
van low and 1.6 16v
Got a rare van there with the roof pop up part. The conversions are straight forward enough. You're doing well.
M

Mickb said:
Got a rare van there with the roof pop up part. The conversions are straight forward enough. You're doing well.
Click to expand...

Thanks, it seems a bit of an odd spec generally! its not a million miles away from being done now the standard waiting doing bits in between waiting for more parts to turn up, main jobs left to do are :

the rest are all little fettling jobs really!
M

ClioSport Club Member
Kangoo
got on with the exhaust last night, a few cuts and some welding and the purchase of one bend (handily had some 2.5" stainless pipe left over from doing the land rovers exhaust) and the Ktec 172 exhaust now fits! 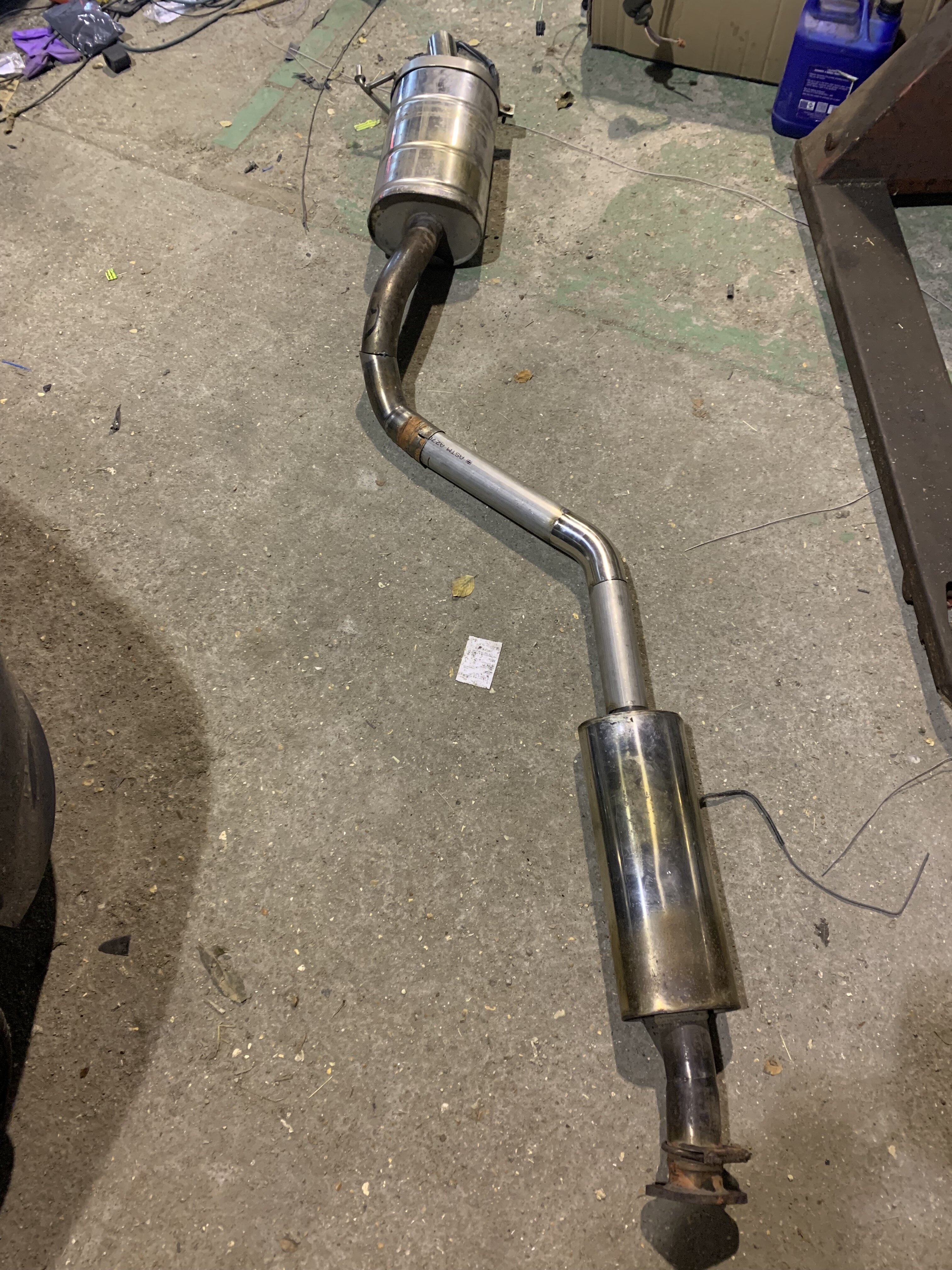 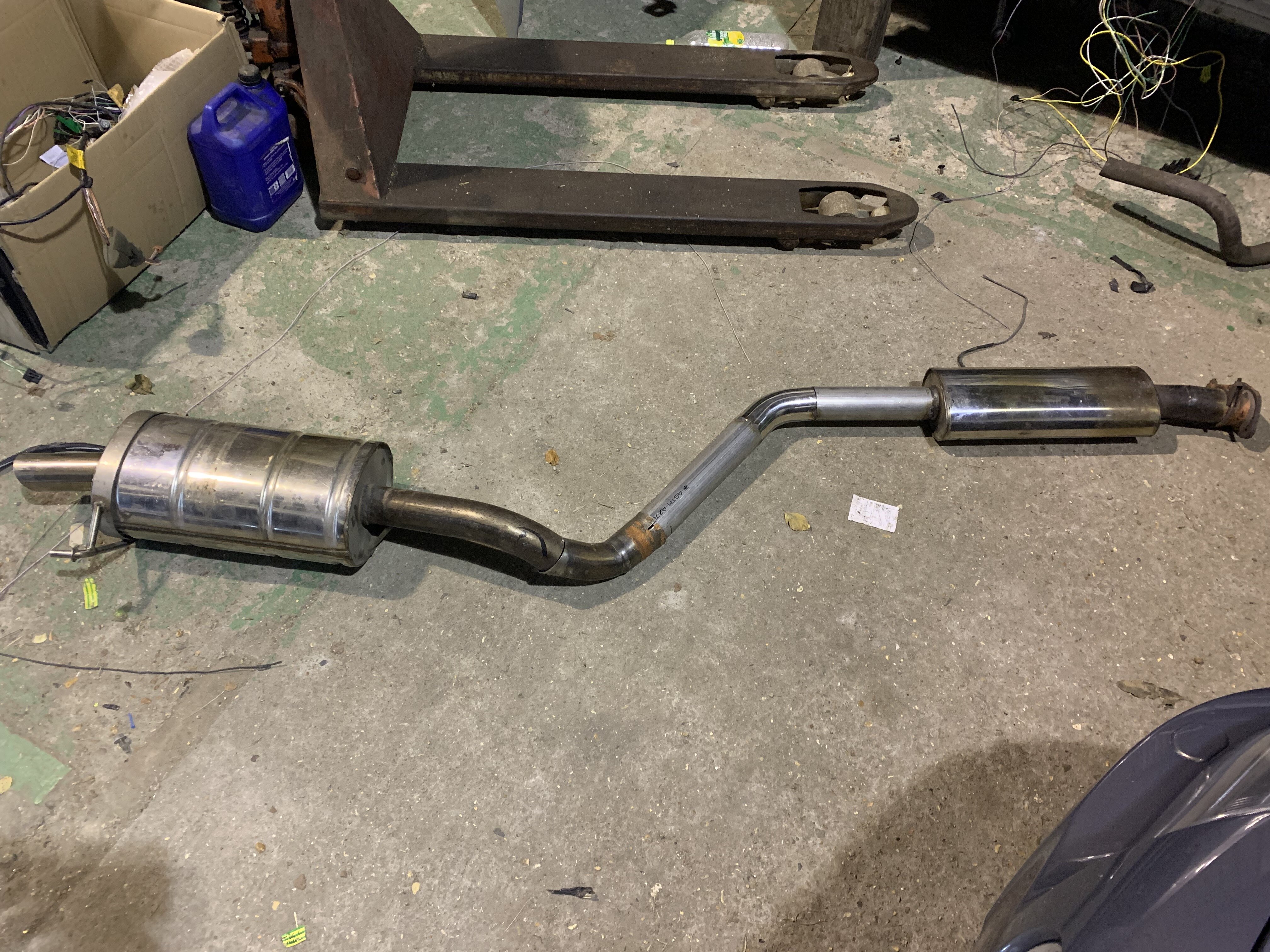 clio
I was reading the spec on a 172 van that was for sale back in August that I had missed and the guy who had it seemed to do have done a lot more work on it after he had bought it from previous owner. maybe he has some tip s and advice that may be of use to you even though you are doing a great job and the exhaust looks awesome!!!! Hope you managed to solve the front suspension issue out
You must log in or register to reply here.