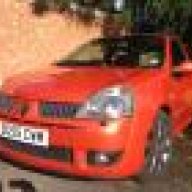 Inferno 182
on a long drive home yesterday on a empty road got my car up 110mph when it started to squeak bit like the old fan belts did years ago then up to 120 the noise got worse so dropped my speed down to 100 the noise stopped then started again after hitting 110 again although performance was not affected
Any ideas what this is as not had the problem before,not being very technical minded thought it could be a slipping timing belt?????:S
Mileage just under 18k if that helps
cheers

I doubt it is a slipping timing belt as you would have had running problems by now, i suspect you meant alternater belt, if it was that belt i would expect noises at lower speeds aswell, more to do with engine revs than vehicle speed, if it definately is a squeak/squeal from the engine bay area get it into Renault and have them take a look at it.
Last edited: Sep 2, 2006
You must log in or register to reply here.
Share:
Facebook Twitter Reddit Pinterest Tumblr WhatsApp Email Link