FAO everyone who attends the Southend meets.

If the Cliosport guys dont mind and and I am not stepping on your toes....

For anyone that goes to these meets.

I have a sticky label making machine at work. What I can do if you are interest is makeup a little label to stick on your number plate with your board name on so we can tell whos car it is.

If you are interested put your name down here and I will create on for the next meeting.

ChavyBoy, if you make labels for the number plates, why not make badges for everyone to wear on their chest, so that newcomers can see who is who, especially for Jaine who seemed to feel a little neglected at Southend.
C

Wouldnt that seem a little geekish ? I mean wearing name tags on your shirt ?

I like the idea ROCKPORT had with his name eg ROCKPORT stamped on a jumper, now that was way cool.

CB, didnt you ever watch Dame Ednas chat show a couple of years ago where she had that old woman Madge, who used to stick badges on the guests? Well you could be the Cliosport version of Madge the badge!
C

Erm the idea with the name badges is a good idea !!
Coz I still dont know half of peoples names. I reconise some faces but Id be buggered to tell you what their names are and what they call em selfs on Clio Sport.
Maybe not on the number plates though. Maybe on the windscreen top right hand side.

Yes exactly Leigh though Geeky as well, makes you look like a Vauxhall Technician LOL

I think the stickers should read...

What do you lot think.
G

Everyone should have numbers and names like football shirts! And a team strip! Yeah a cliosport strip with a team mascot, now what could that be...

...im getting carried away
C

Hey we could even start a five aside footy teams and play the Max Muppet 5 aside team........ Not !

of course, those who are members could just display their membership card in the windscreen - and maybe add something that gives their boardname to sit alongside??? then we know who to get signed up as well !!

This is going to end up going back to the Cliosport Number Plates...

Ive got a sunstrip with my domain on it, so most people could work it out from that.

Kis makes sense. Lets see if we can do this for the next meet. Just pop the membership card on the drivers side inside and have there board name as a sticker still on the numberplate.
S

Chavy - sounds like a good idea - we should def. do this - of course not everybody will do the sticker thing, and not everybody will be a member, but at least it will give us a start an finding out who everyone is!! Im not difficult to know really, since my car is fairly noticable - but others are more difficult!
C

You, Geoff and myself where easy to spot on Saturday being you had the only yellow 172 Geoff the only blue 172 and me the only red 172 class hey ?

With regards to the stickers OK not everyone will do it but for the ones that choose to even if they are not members I can still produce a tiny sticker for them..
L

Still wont help me put faces to the cars though !! uNLESS WE HAVE PHOTO CARDS !!!
C

was there any greif down southend last week as i heard that a bunch of pikeys were heading down there to cause trouble, the cops were sending in more officers and stuff, I only ask as on the way home from the mean street I me and my mate were nearly run off the road by some arse clowns who were in a big old BMW and were hanging out the window swearing and gesturing at us, a really good idea when it is teaming down with rain and we have 30% tints and no rearview (stereo install takes up all rear vision), I mean driving a beetle down a m road at night is a slut at the best of times let alone when its raining and u cant see jack, combined with some loosers who are intent on causing distress to others - people like that should be strung up and publicly gutted and have their corpses fed to,,,,, i dunno something bad.

anyway was there any trouble?
C

Nope I didnt see any unless you call a nova and a cavalier have a little bump on the road action.

Actually when we went down to the Arena is essex for Robin Relaint banger racing a BMW full of lads cut alot of people up coming out then nearly trashed their car bloody a-holes !
R

PS.. for all your ROCKPORT needs visit www.rockport.com

It wasnt until i got on the A127 i thought... sh*te sticks ive got a RP sweatshirt on.... tho i think it helpped to the edge of the meet as loads of people came over to me for a chin wag which was good! hehe
N

Yeah Rockport I loved your jumper. Made it so easy to recognise you. Definitely at the next event we should all put cards inside the window. Also will show whos been a cheapskate and not stumped up the subs!

At the Donny South show well try and have some Cliosport staff shirts made up so at least people can recognise us and will know who theyre speaking to.

Just saw a piece on the front page of the Southend Evening Echo that was praising the Essex cruisers for such an orderly and trouble free evening. Makes a change, maybe a sign of things to come? Once you get rid of the t**sers it makes for a good evening.
R

Why just the Southend meets?

Girlracer - I wasnt feeling neglected honey. Just found it hard to strike up conversation with new people. Tried but think a lot of people thought I was with someone else in thier car. Next time we will all know better so NO I do not need a name badge thanks. I am getting my Renault Sport changed to Squirt. x
Y

I could run a few off to try as we have colour laser printers here that go upto A3 then I would have to laminate I suppose but you better agree this with the gang as I dont want to step on anyones toes.

"Why just the Southend meets?

Rhys - me no understand da question, otherwise me would try to answer?!?! Me being fick again??? K

Sorry and you are ?
R

Just seems to be a bit of a "Southend or nowhere" thing going on....or maybe Im just paranoid.

Chavyboy - if the "Sorry and you are?" was directed at me, then Im Rhys and Ive been around on this site since June 2001

Rhys
Think it was a funny statement to Daves "everyone knows me coz i am so great" comment.
Not sure who this Dave is tho?
R

BTW it was directed at Dave. 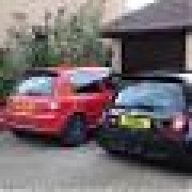