Clio Bizu
So about a year and a half ago i got myself a Mk3 Clio after my Mk2 popped a head gasket and i lost interest in it entirely.
I settled for a 1.2 Clio Bizu Edition; 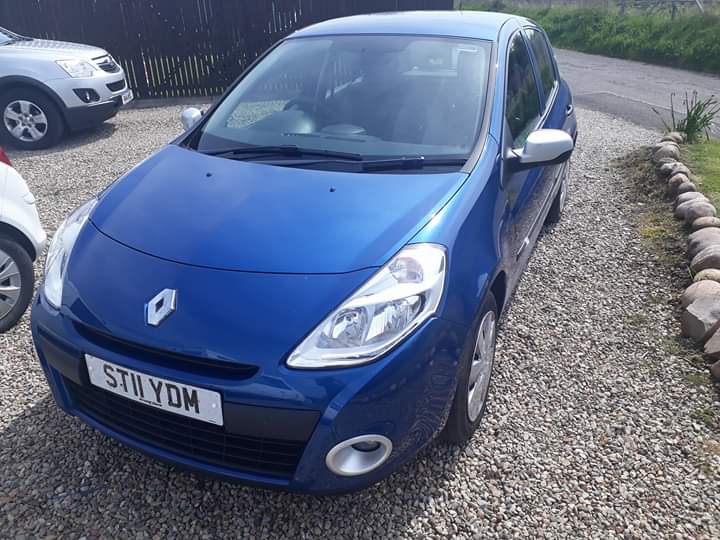 I bought it for 4k from Arbold Clark, got it with a full years MOT and 6 months tax plus they chucked in £20 of fuel for me before i left the place! The back box fell off 2 days later and the f**k about i had with Arnold Clark to fix it under warranty was unbelievable.. but they did it after waiting 2 days! 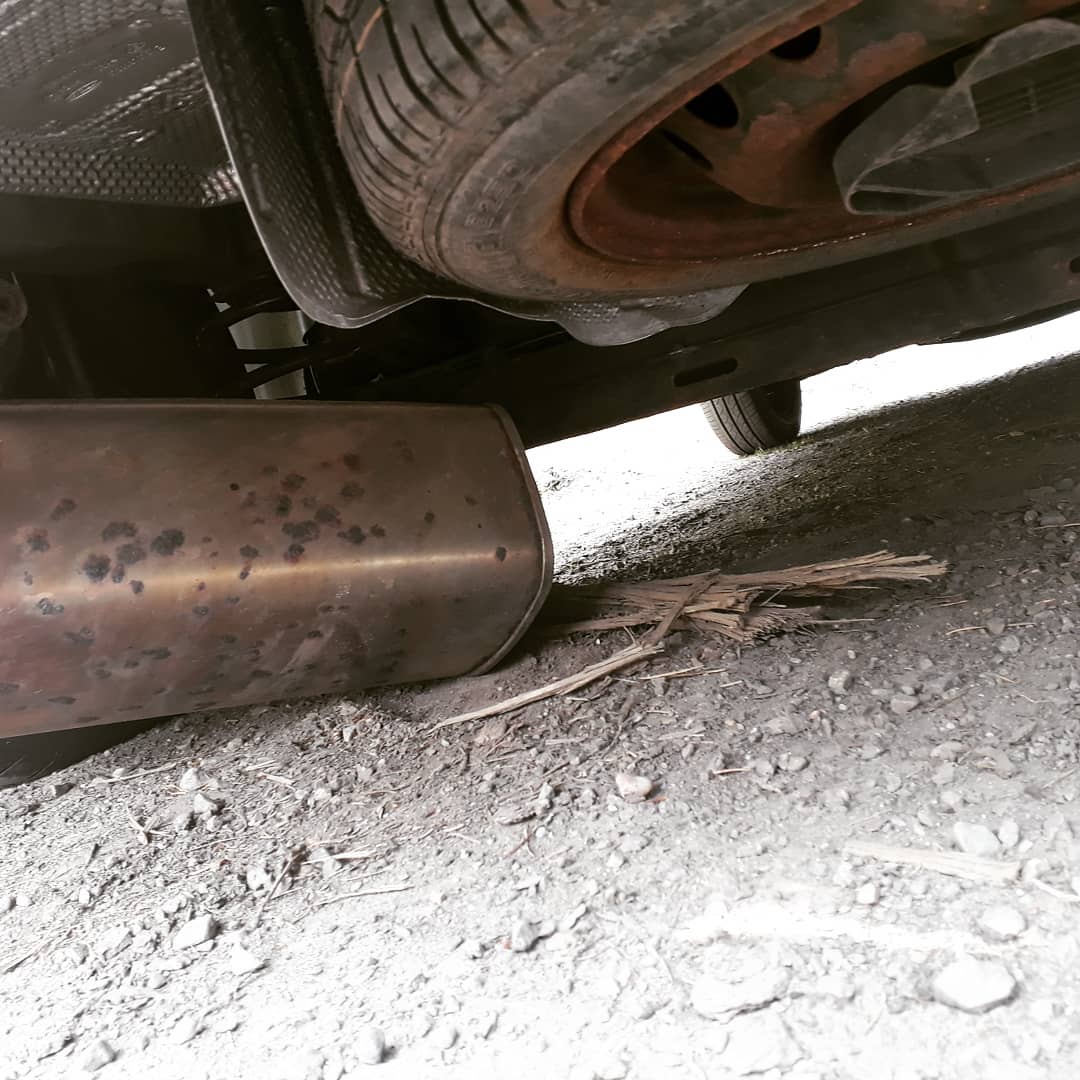 This stayed bone stock for about 6 months or so before i did some small bits to it which ill list later on.
Its decent on fuel, cheap to run on the daily 100 mile round trip i do for work anyway. Tax was no different to the last car but its way cheaper to insure even with mods!

After a wee while i bought some wind deflectors and fitted them, along with a stubby aerial and a sticker. Kept it like that for a bit and kept working away for a while, then i took my old set of wheels in to work with me and i blasted and painted them, they were old 15" OZ Racing Superturismo; 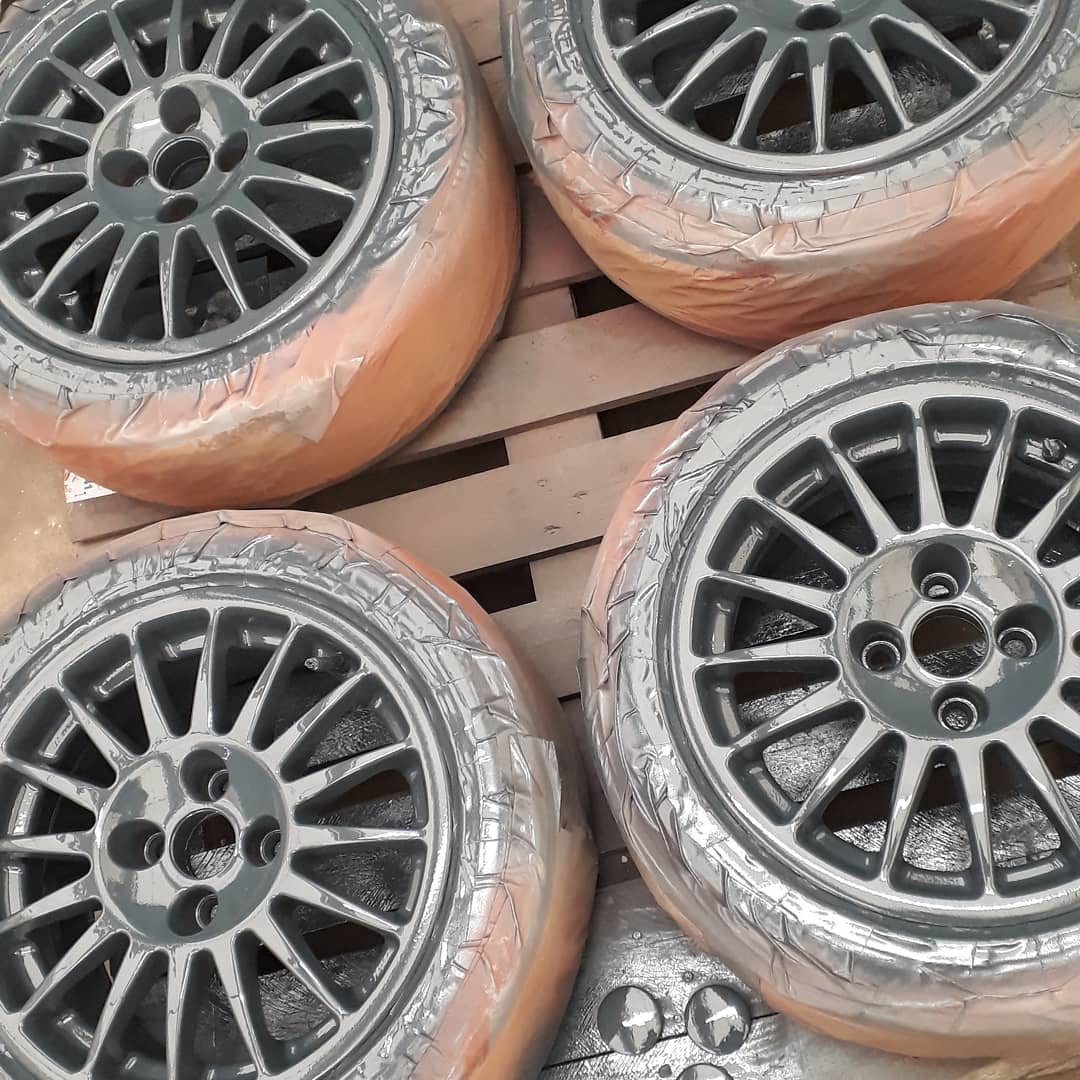 Before i fitted them, i bought a wheels stud converson kit from Driftworks then got to work fitting them along with some H&R 45mm lowering springs; 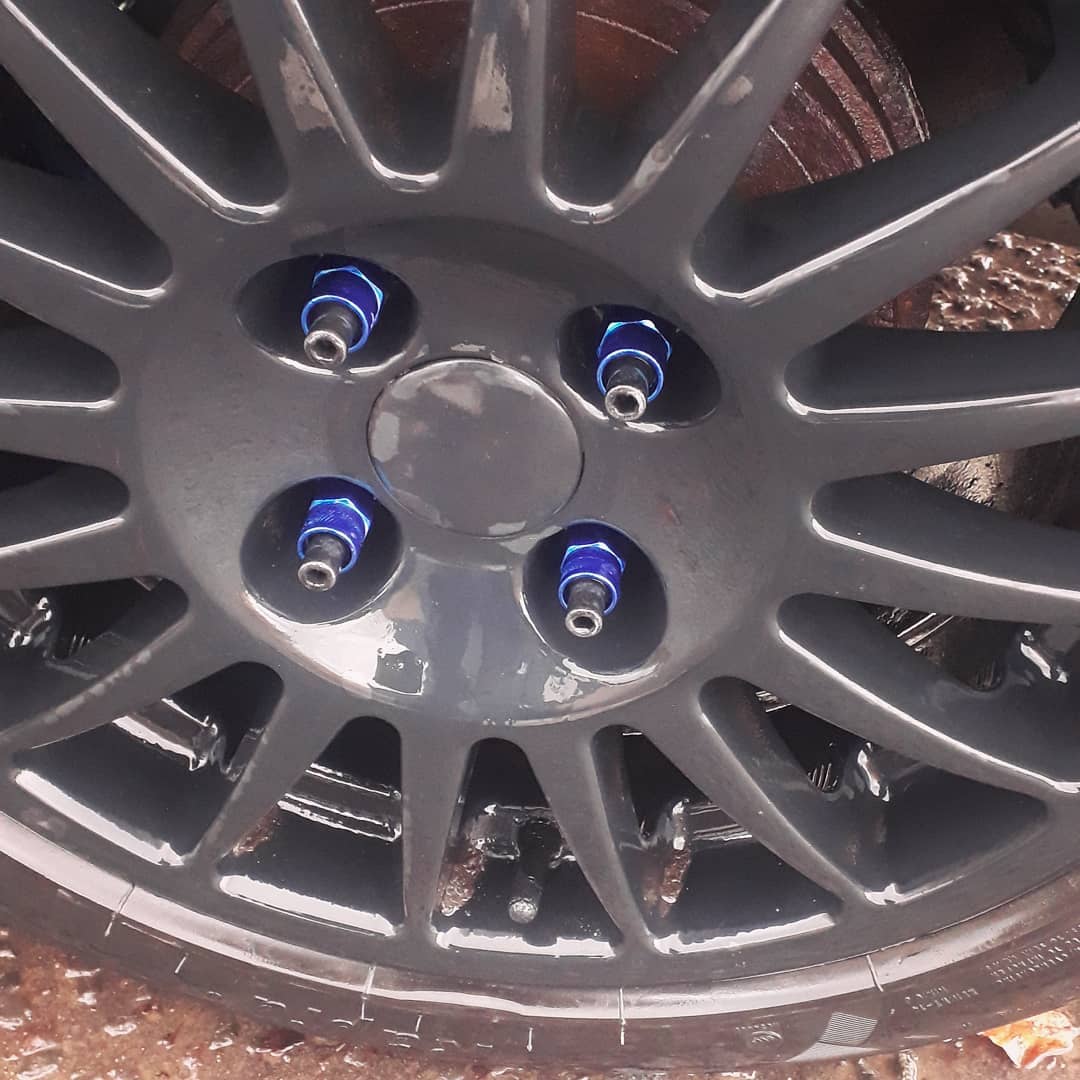 And heres how the car sat; 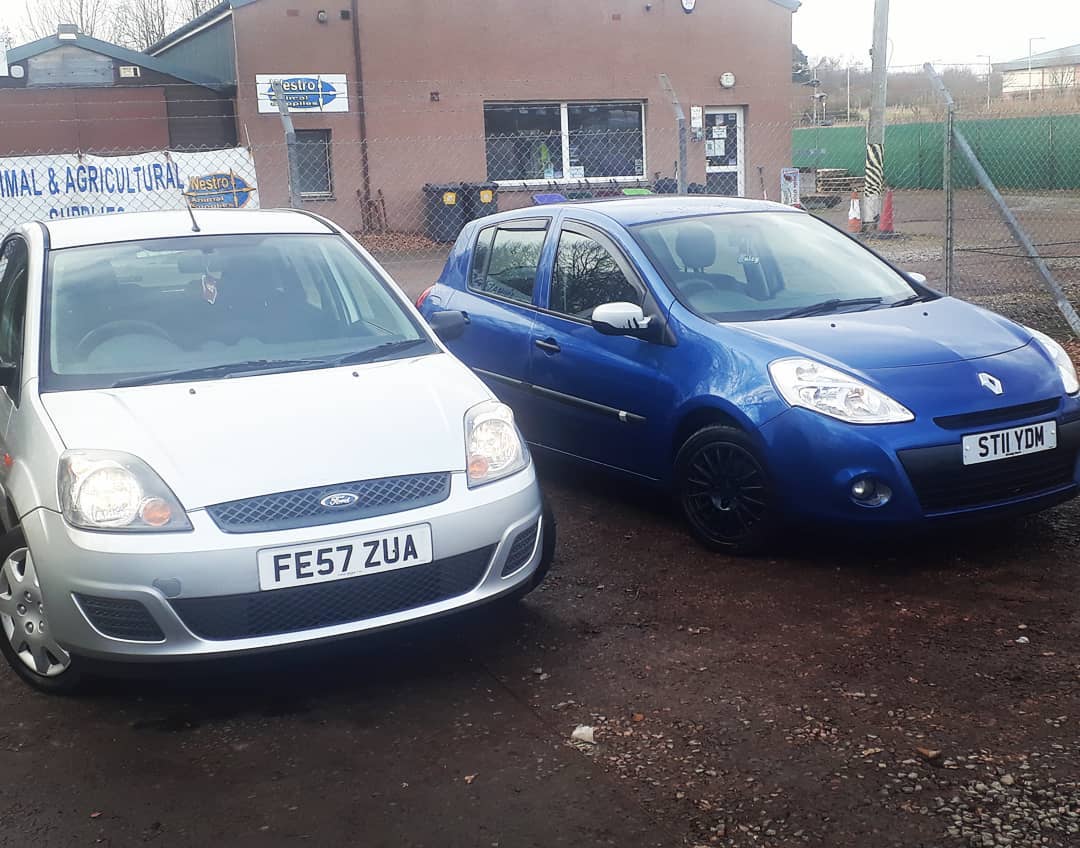 Ran it like this for a good while, then decided to debadge the boot, respray and reposition the "Bizu" badges too, sprayed the wind deflectors and A pillar trims satin black, all of which i dont have a photo of! (Thats my bad)

After a few months, i wanted a change and start chasing the goal of how i really wanted this thing to turn out so i ordered a set of JR11 wheels with some Nankang NS-20 tyres 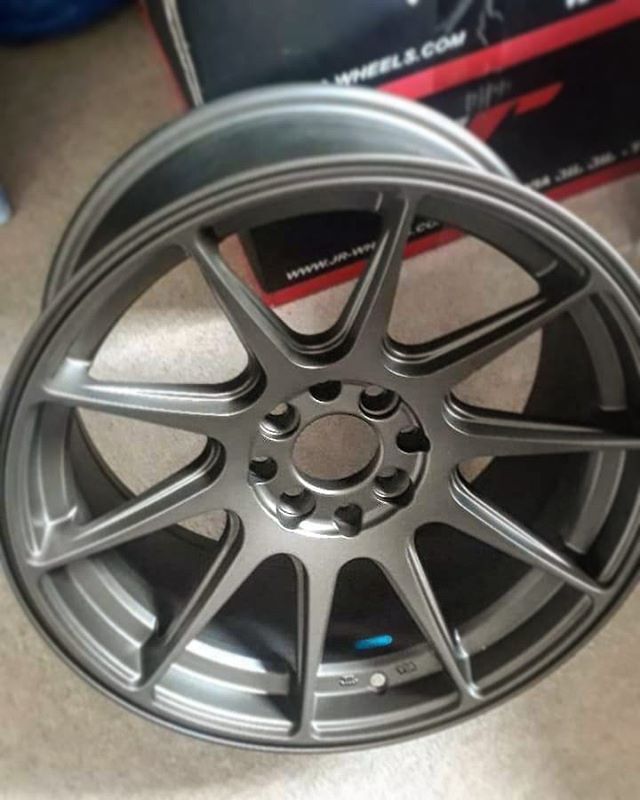 And i fitted them as soon as they arrived at my local McConechys, i think they look meaty! 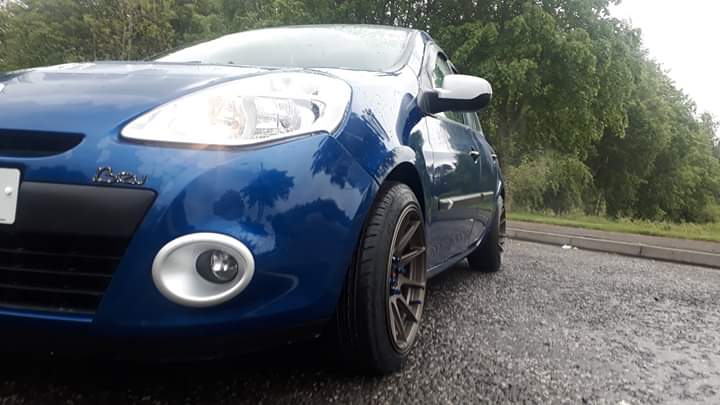 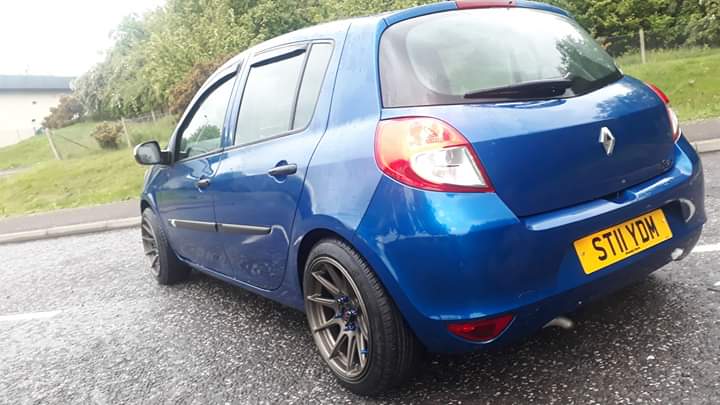 Before long i decided to get a Cupra R splitter and fit it, i pinstriped it along with the wind deflectors with blue pinstripe tape which imo turned out not too shabby, i sprayed the splitter satin black too and tinted my fog lights yellow just for the sake of it since i had some tint lying around the shed. 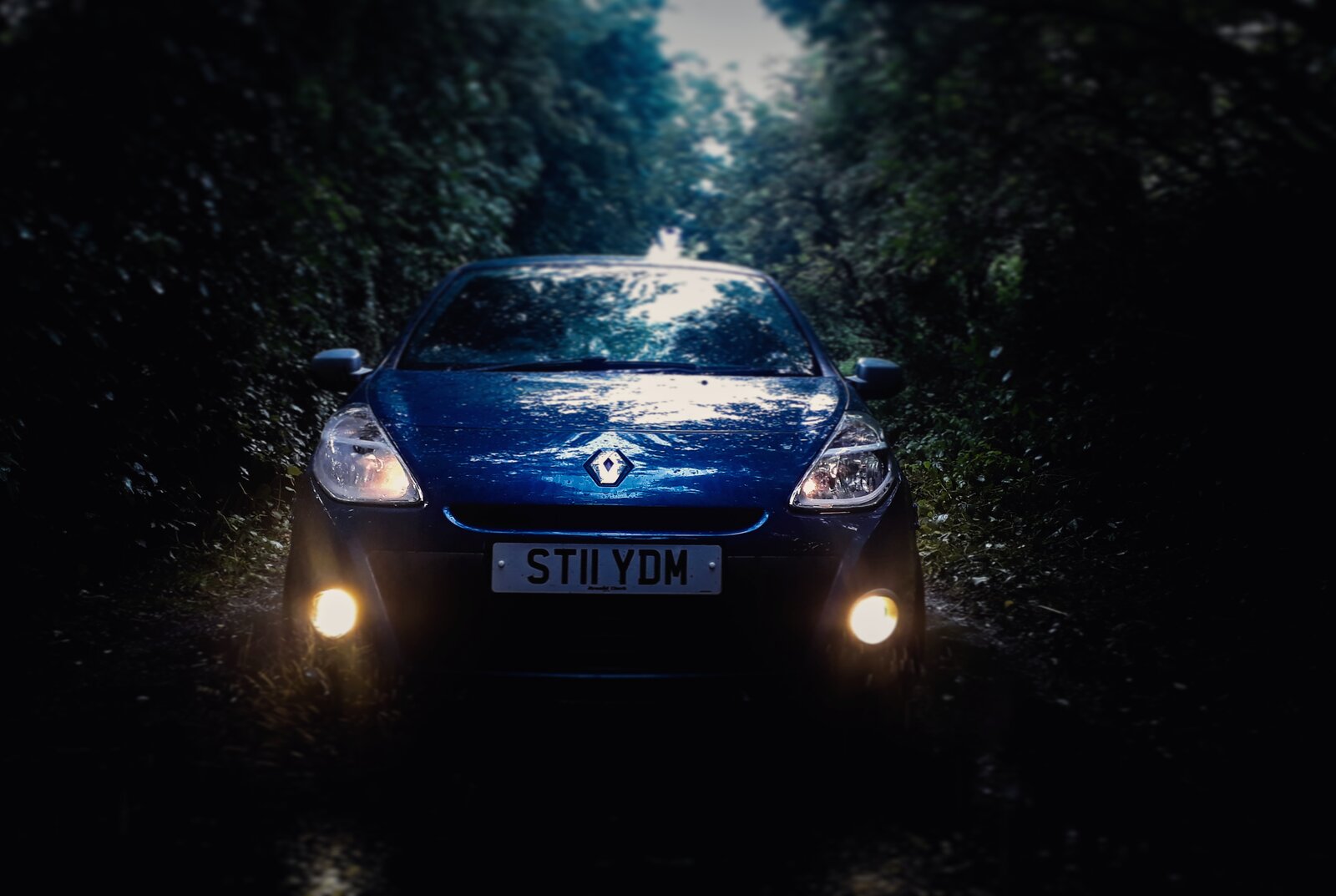 Recently i ordered and fitted a Sportex Exhaust which sounds pretty mint, and ive got some coilovers now that i need to find the time to put on and slam this thing to the ground!

Ive likely missed some stuff but ill update everything when i can!
Cheers for popping on and having a read

Clio Bizu
Update from where i left off...
Sportex exhaust as i said sounds pretty mint. Has a deep tone that isn't deafening even at motorway speeds, though you can hear me coming way before you see me 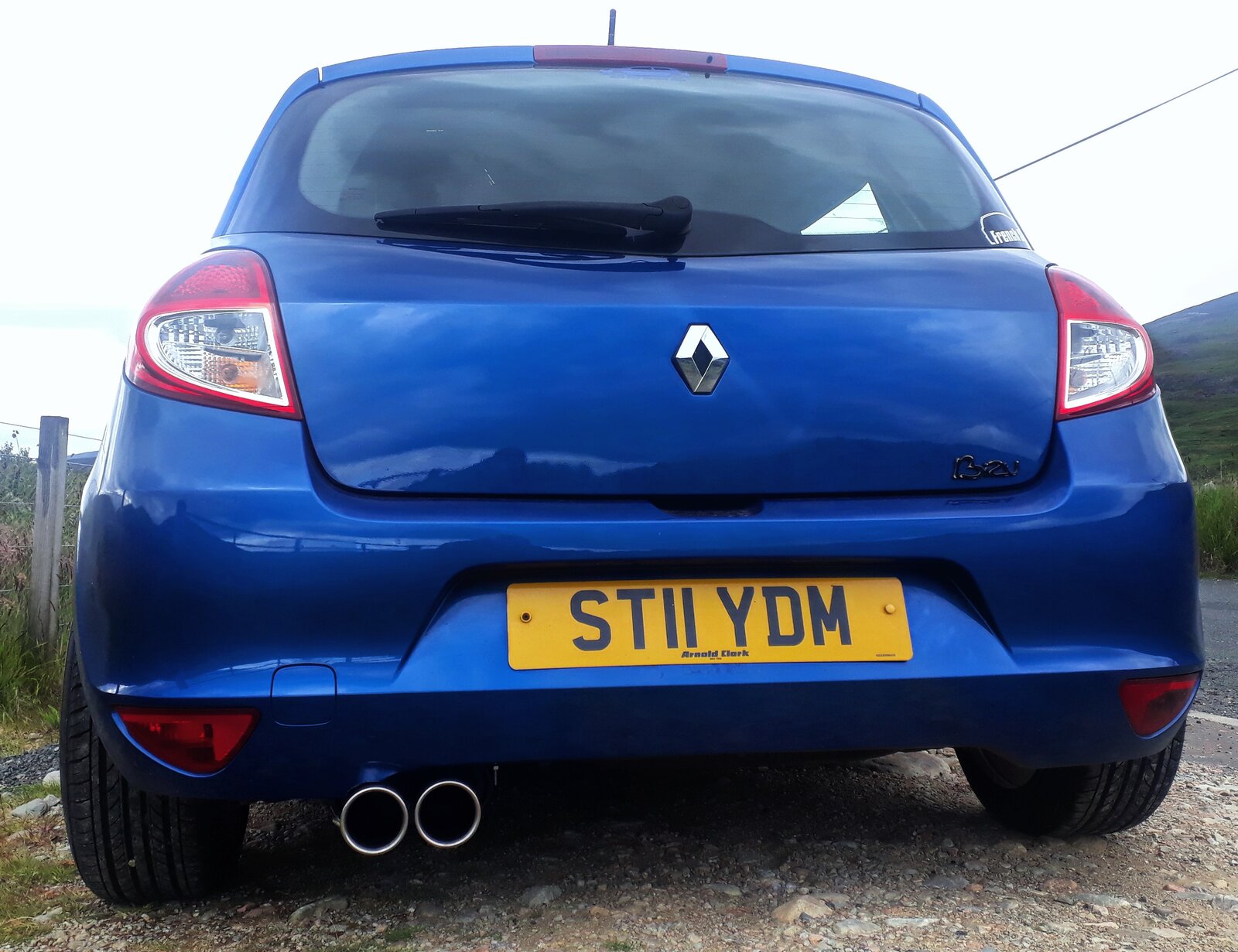 My coilovers are now on!. I opted for some AP coilovers, lowered these as much as i possibly could and left out the rear adjusters fox max lows! So far so good with these, the ride is ace and isnt close to as harsh as i was expecting it to be! However speed bumps are interesting 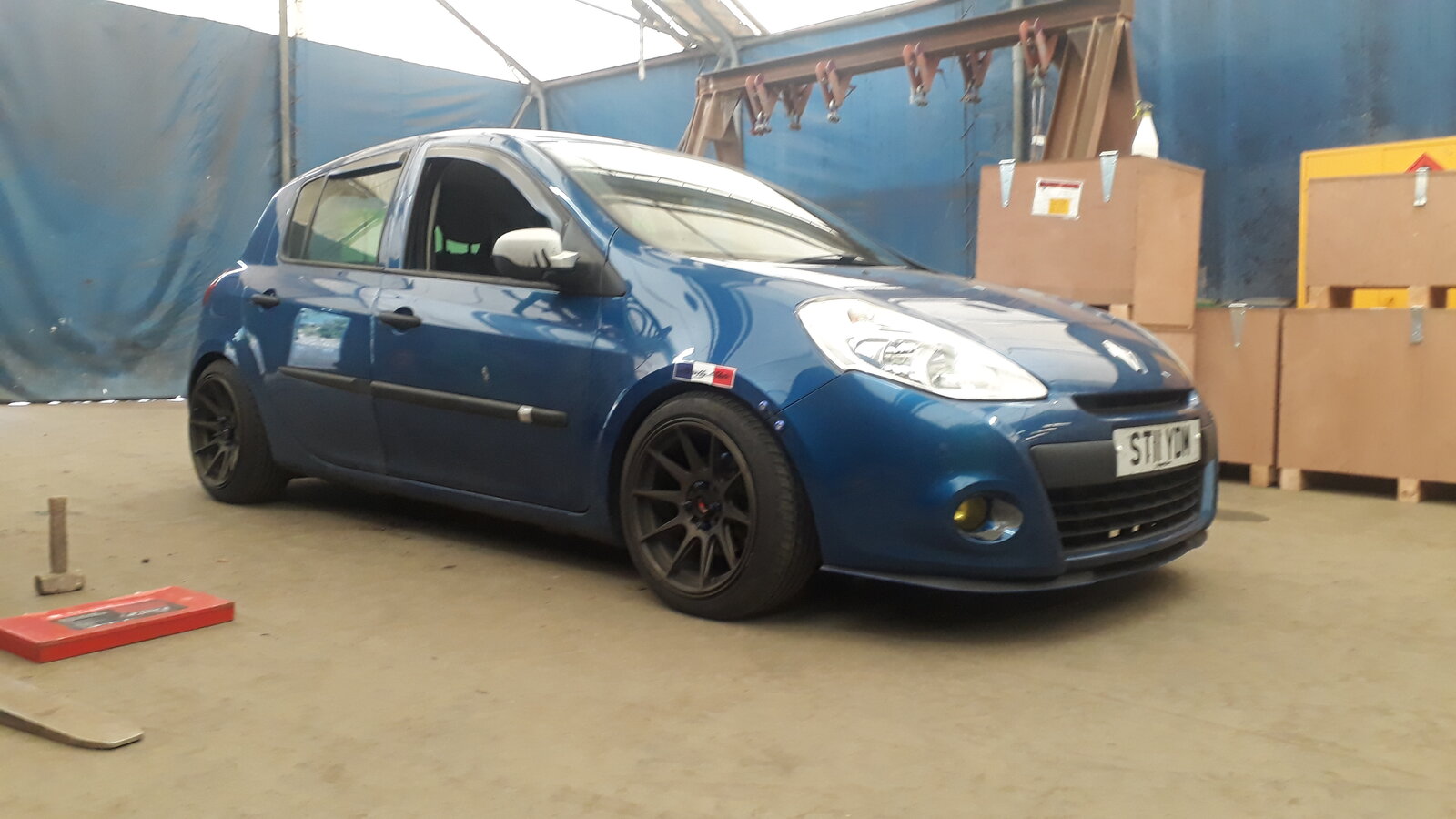 Still waiting for the springs to properly settle as youd expect but i love how it sits and drives now! I just need an alignment done to finish it off i guess.

Still plenty of plans for this little thing, all show and no go being a 1.2 NA but we all started somewhere, right?
1

ClioSport Club Member
Clio 197
Car looks good mate, especially those alloys! I've got a 197 and unless your in the upper rev range, it's also all show with no go, so I know your pain I reckon a sprint spoiler would look ace and finish off the back end.

197. said:
Car looks good mate, especially those alloys! I've got a 197 and unless your in the upper rev range, it's also all show with no go, so I know your pain I reckon a sprint spoiler would look ace and finish off the back end.
Click to expand...

Yea man, i was looking for what felt like forever to find a sick set of wheels, absolutely love these, they fit really flush with the specs.
Id have thought they were a lot better than that, the 1*2 i know is meant to be a lot nippier?
Im looking for an RS cup spoiler to put on later on, got a few things i have in mind before that, making a bumper atm, for it then i have a second bumper idea i wanna build

Clio Bizu
Went ahead and finally got my wheels aligned, lasted all of 10 seconds after i hit a pothole

Sorted out the camber and toe for the most part. Wheel fitment is BARELY legal, but its a pass! 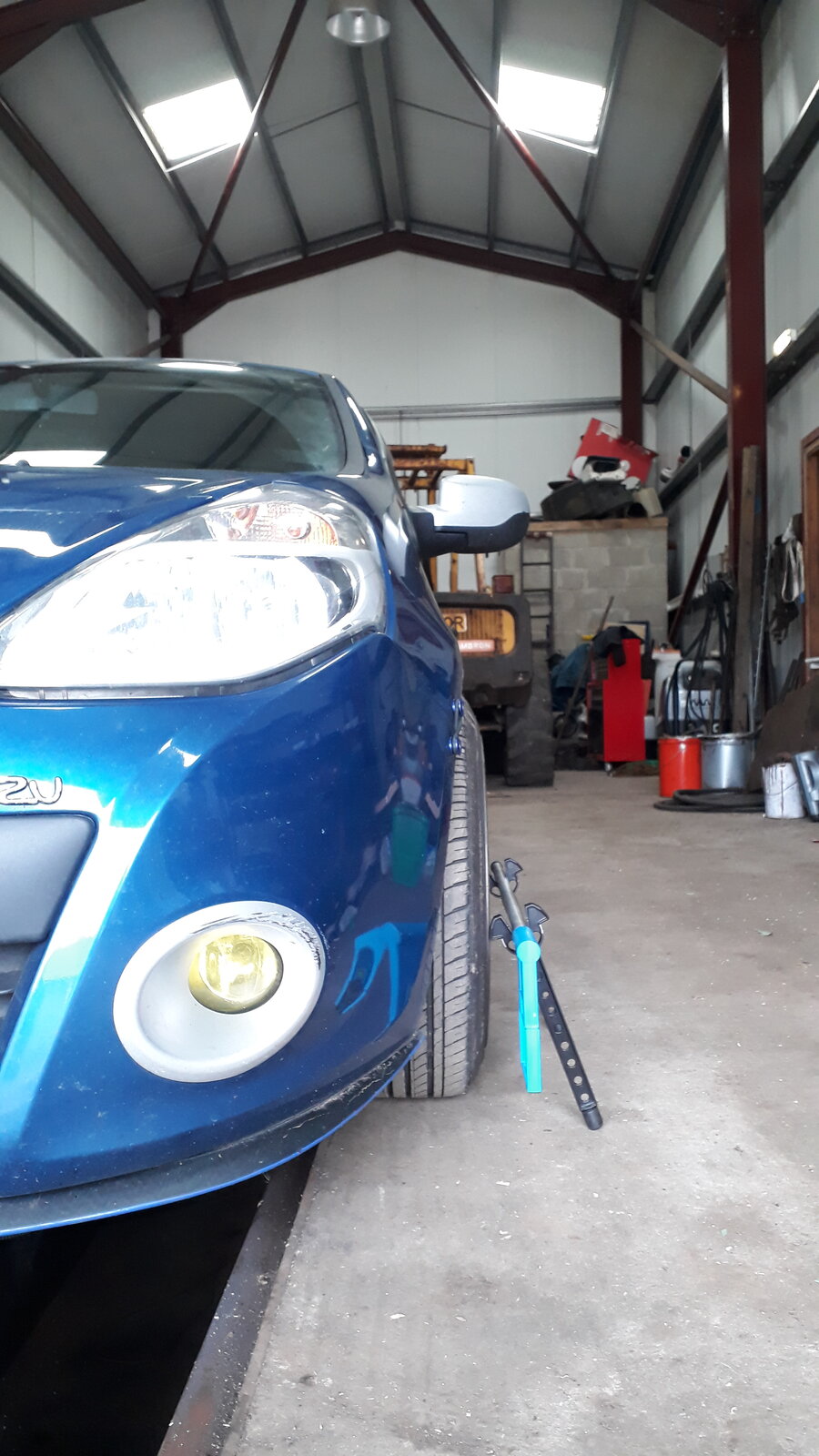 I. Really pleased with how it looks, i want to bring the back wheels out more, though i dont want to run spacers, they were never in my to-do list for this car.
But heres how wide it is at the front. 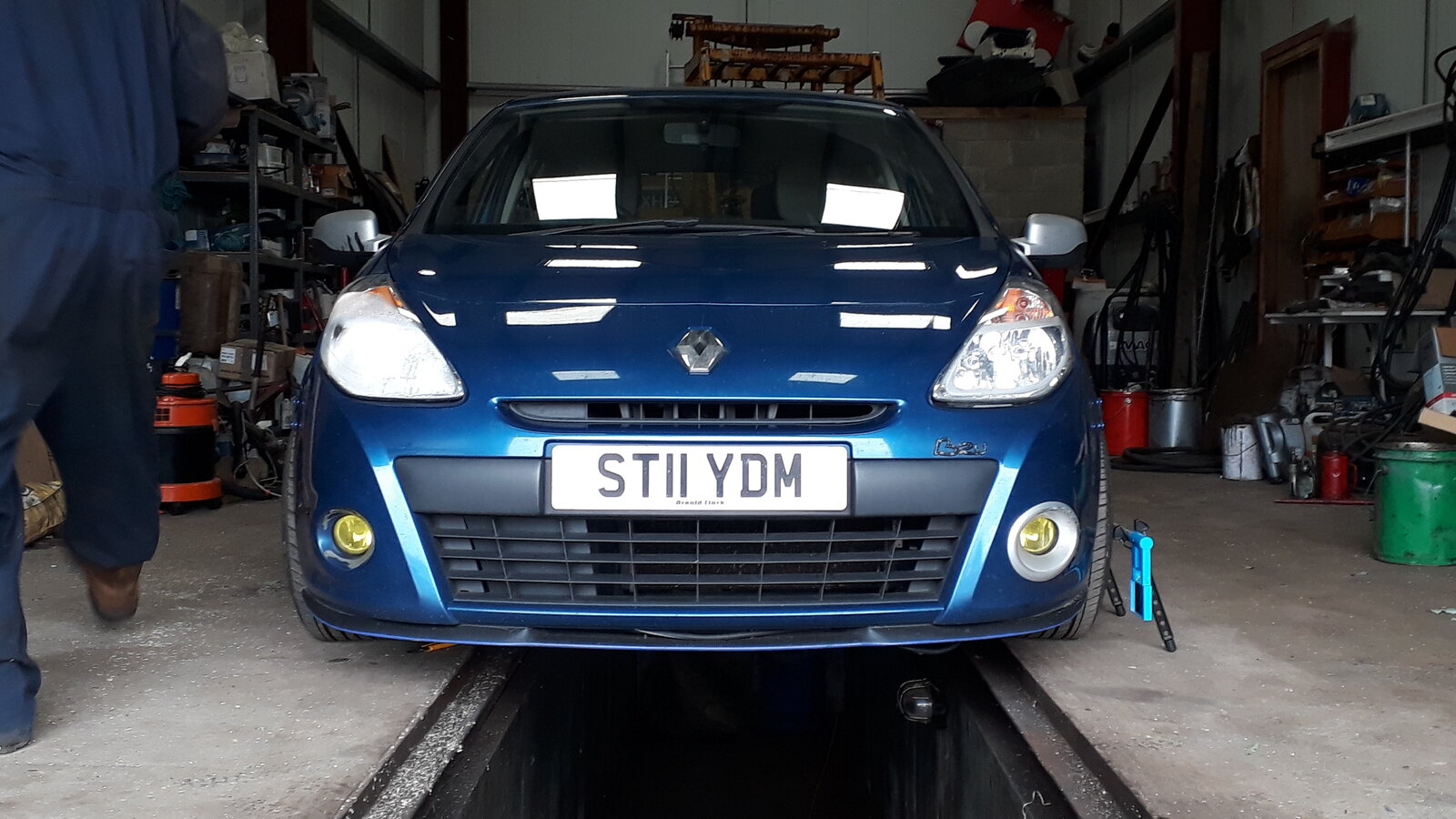 Mean, right?
Please recognise this, i am not building this to meet anybody elses taste, nor am i here for the attention or likes. This is purely for me and for me to show my own taste and build something i have envisioned

I dont care for the engine size or speed, its a daily toy at the end of the day

Clio Bizu
Pieced together a little before and after for this thing. Not a bad change for only having it about 18 months 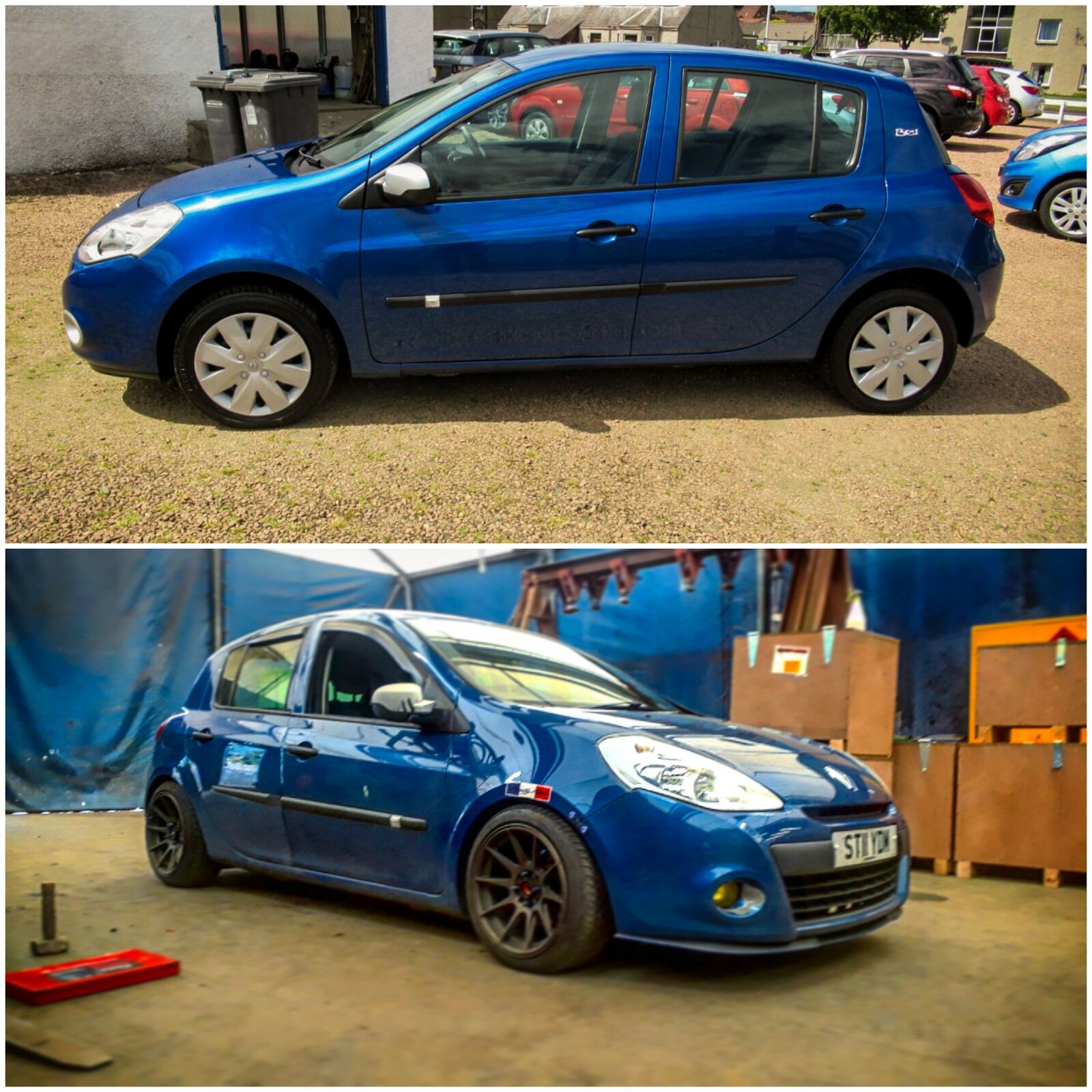 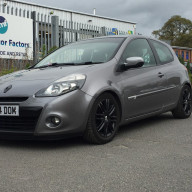 ClioSport Club Member
2012 Renault Clio
Have a look at the AP Coilovers. About £450ish

I currently have a set of 45mm H&R lowering springs for sale, theyre for the newer style top mounts though!
The coilovers i got were £600 from LK Performance

Clio Bizu
Been a while since ive updated this!
I finally got all my interior stripped out and got to sanding it all down and sprayed it all satin black coz the cream was absolutely disgusting! I also wrapped the headliner in black suede, feels and looks really nice against the satin black too! Currently wrapping my sun visors in the left over suede i had left too, ill get them back on at the weekend

Havent really done anything else over the christmas period. Sorted my crunchy gearbox and scraped pennies together for christmas

Next thing will be a service and brakes before i bugger off on holiday next month! Then its back to modding again!

May as well have a photo of the car 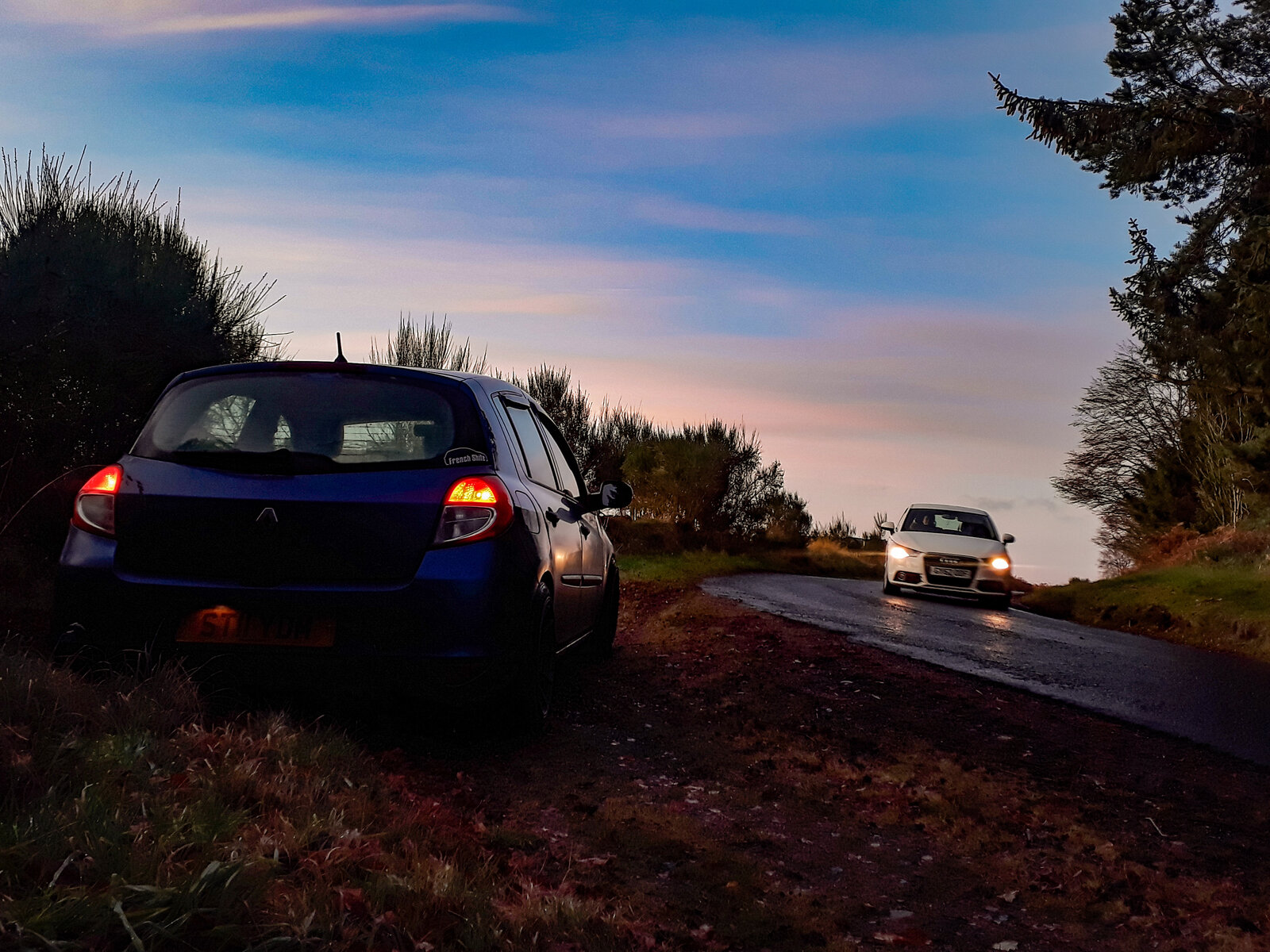 First off, got my exhaust welded for the MOT that was coming up.
I replaced the wishbone since the swivel hub joint was knackered
Sealed the headlight unit as it keeps condensating over which im still trying to sort - waiting for some silica packets to arrive so i can dry it out and put it in a box for a couple of days to see if that helps.

Handbrake is tight again and now holds the car in place!

Rear light is fully sealed and free of water ingress from a small crack in the back of it.

Absolutely heaps has been done!
First off, i got to work making the car even lower, but to a point its still (barely) practical.
Took out the front helper springs and wound the adjusters up about 10-15mm in the front, took out the rear springs and replaced them with Eibach 60mm lowering springs off of a Corsa B (rated 6kg/mm)
I think it gives it a far better look and theres less give im them compared to the AP springs.
Took it to the garage for an alignment, £72 later; 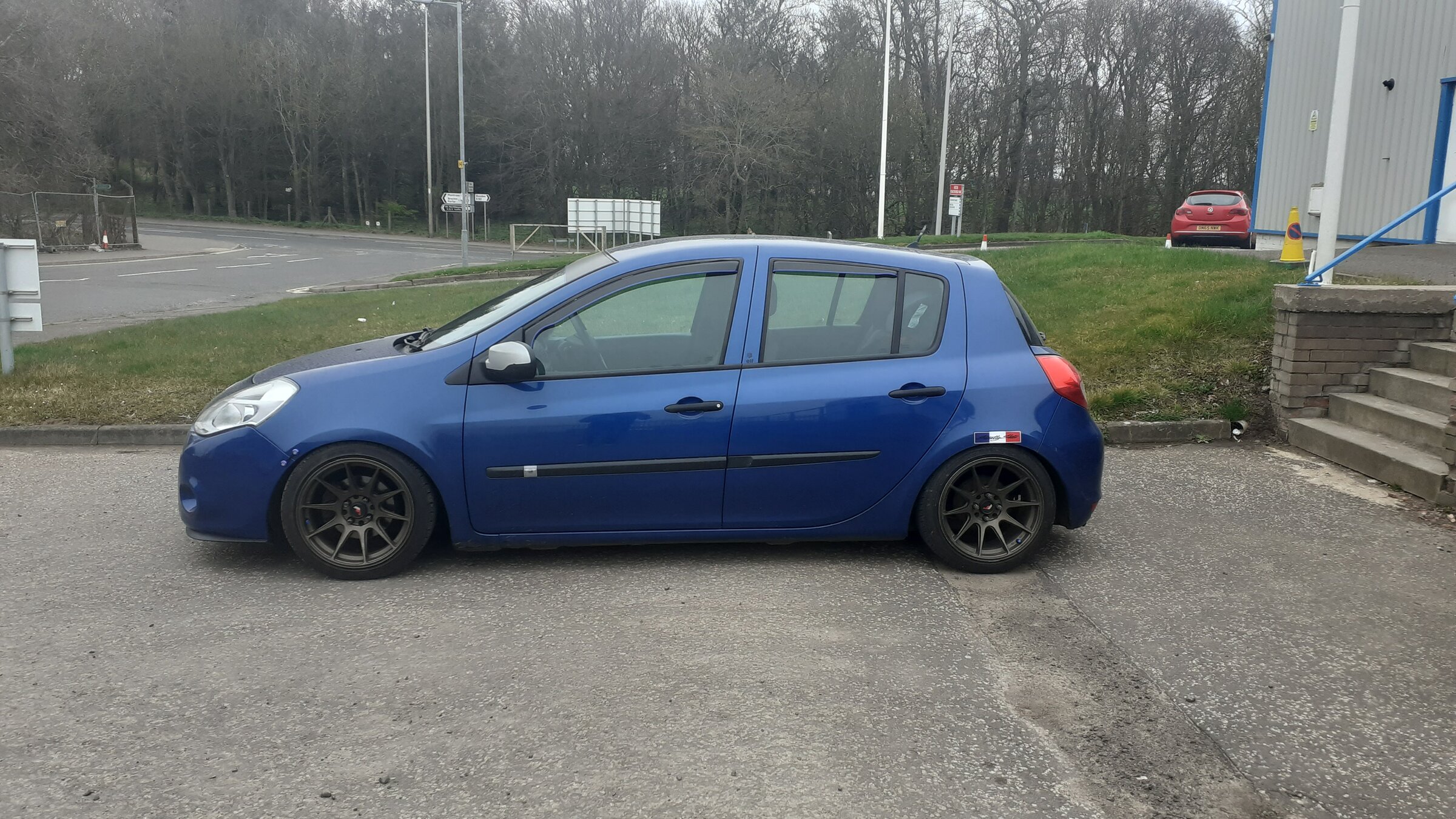 Soon after that i got to work on the interior again, sprayed some trim parts blue, painted the lettering on the gearknob blue, and wrapped the door card cloth in black suede to go with the roof liner and sun visors - i have no pictures of the interior yet coz im shite at taking pics

Ordered some carpet mats, purely to protect the carpet better, settled for black ones with a blue edge and little french flag emblem on them. They actually look pretty mint for £15 imo!

More exterior work was then done.
I changed the stock grill out for an ABS honeycomb one, fit on easy enough with a wee bit of cutting here and there.
Fitted a new splitter as i didmt like the Cupra R one i had on. Bought a cheap £6 Rhino lip for the time being until i can get a GT lip. Looks not too bad but still not what i want, albeit an improvement from the last one anyway

Sprayed the mirror covers satin black as they were badly scratched and some paint was flaking off
Debadged it completely - before, i only took off the "CLIO" lettering then resprayed the "BIZU" badges and repositioned them.. well its all gone now! Looks better i think!

Heres how it now looks with stuff done; 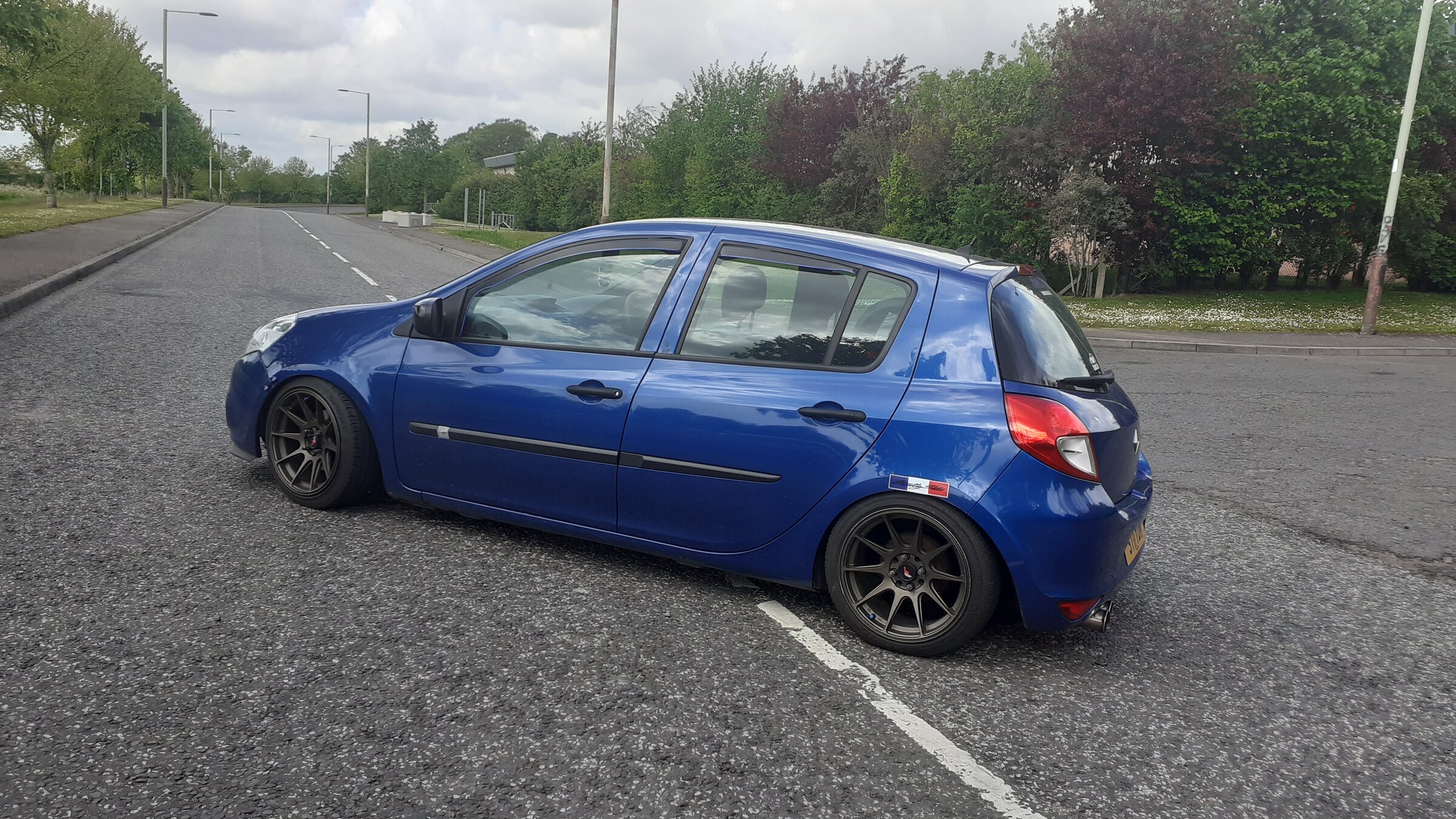 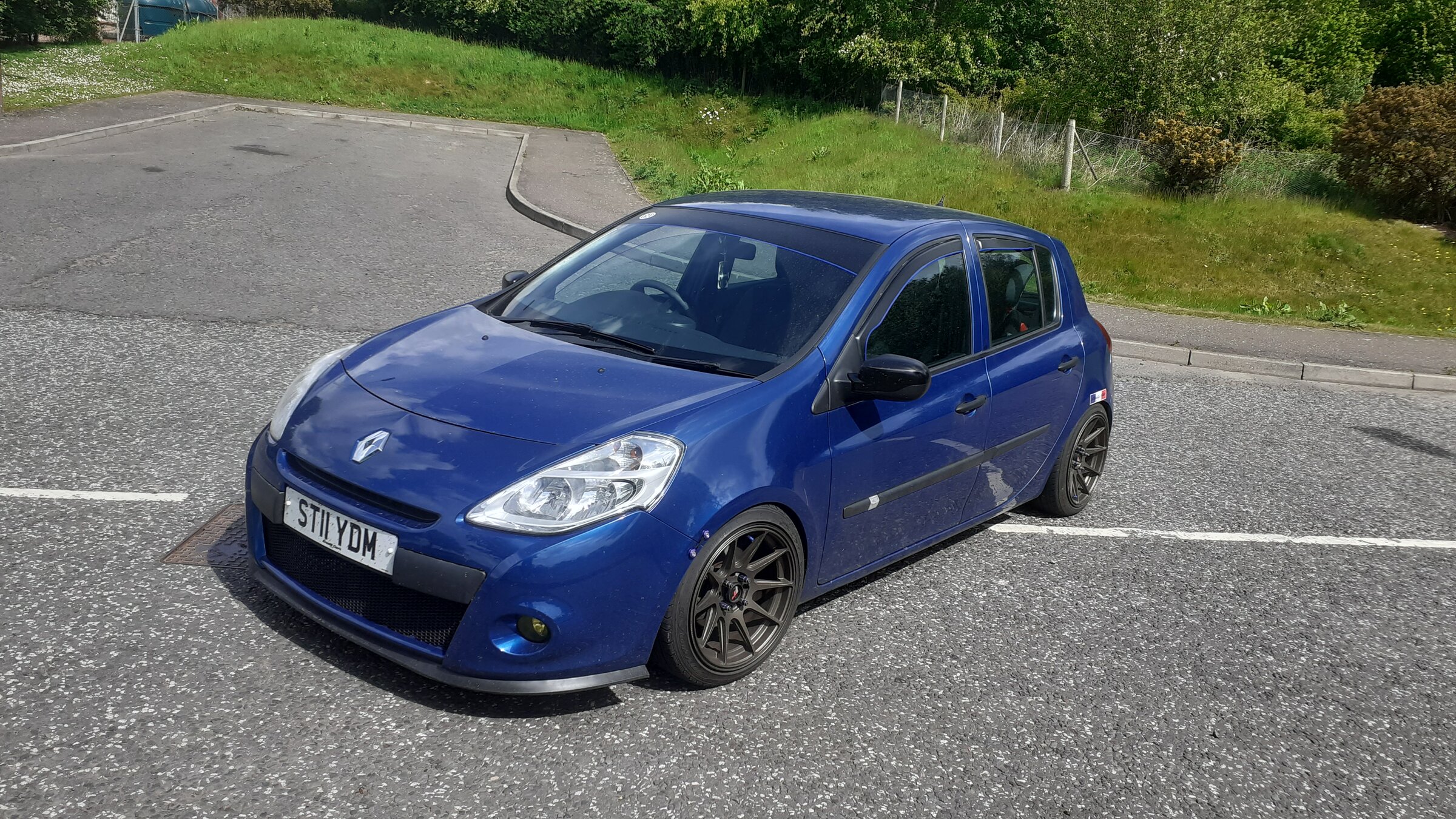 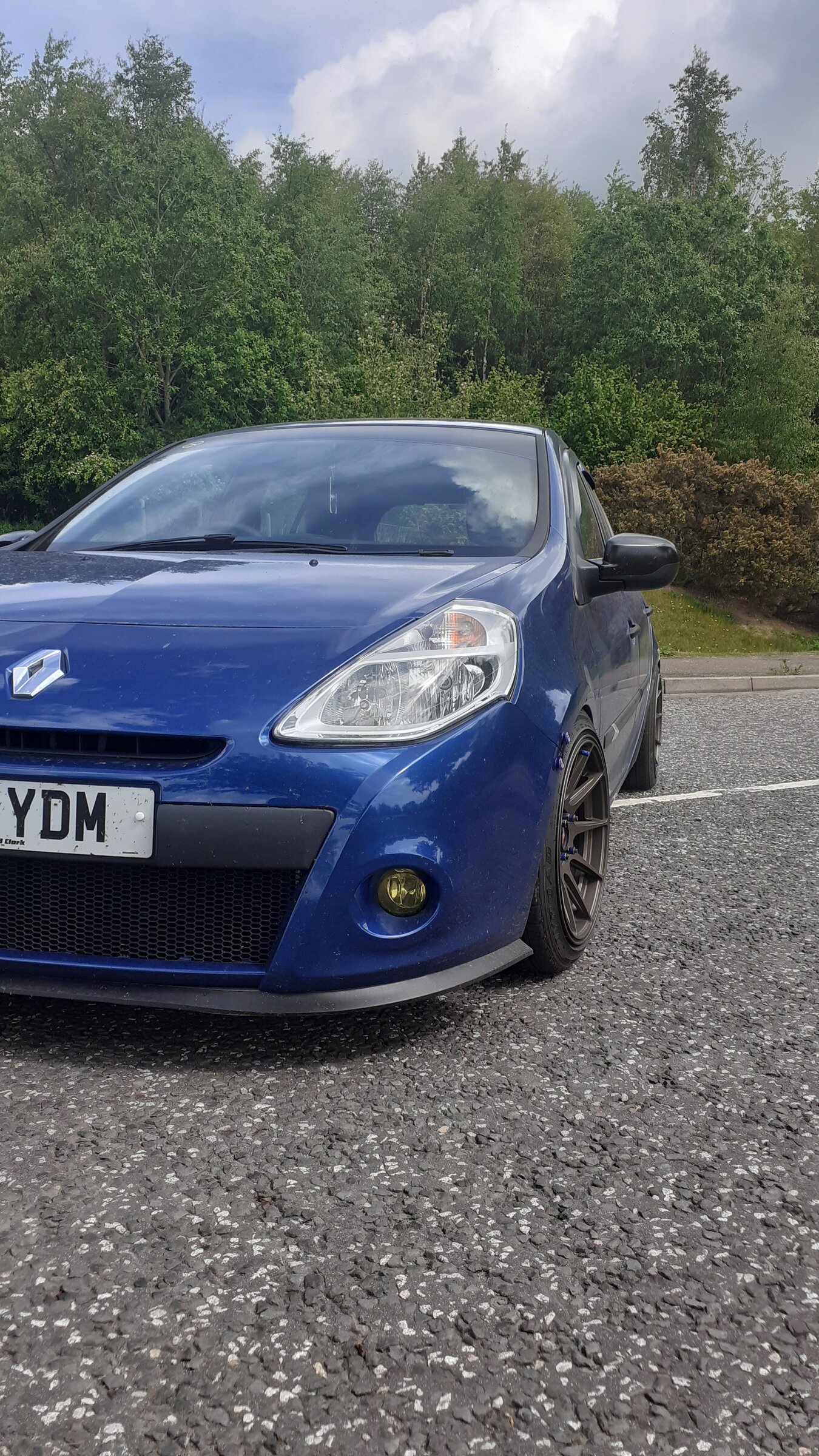 Really happy with how its turning out and im very close to finished it too.
Gonna be wrapping the roof in satin black at the weekend, we'll see how that goes

All i need after that is a set of custom rear coilovers on so i can properly dial the height in. Some spacers so i can get the fitment i want - stock body wide

amd then sort out the paintwork as its in really bad condition!
Then its just sprting all the wee minor things thats not even worth mentioning

ClioSport Club Member
Clio 197
Looking better with each update! Do you plan on getting a GT splitter from Renault?

197. said:
Looking better with each update! Do you plan on getting a GT splitter from Renault?
Click to expand...

Thanks man!
Im looking for a GT lip from anywhere but Renault as i know theyre really expensive from them directly!
J

also how do the 60mm corsa springs fit ? Are the not quite loose?

also how do the 60mm corsa springs fit ? Are the not quite loose?
Click to expand...

Matts look quite good, better than i thought they would tbh
Springs are fine, no issues whatsoever, had tge car up in the air and everything and theyre still there so theyre defo seated properly

JKeillor94 said:
Matts look quite good, better than i thought they would tbh
Springs are fine, no issues whatsoever, had tge car up in the air and everything and theyre still there so theyre defo seated properly

Where did you buy them from. Link?

Jdavis399 said:
Where did you buy them from. Link?
Click to expand...