ClioSport Club Member
Given I have a few project threads on the go it made sense to merge these two PH1s into one thread as they both came from the same owner.

So, just got my hands on two PH1s, one Iceburg with a genuine 32k on the clock and a Titanium with 62k on the clock. The Iceburg has been parked up since 2006 and the Titanium since 2011.

Both cars are original throughout however the Iceburg was a Cat C within the first year of being on the road. I have gone over this car thoroughly for accident damage and it would have to be significant to write it off however I can't find any structure repairs/damage. Plus the panels are all original as is the paint excluding the roof. However the drivers widow has been replaced at some point as it does not carry the Renault markings which leads me to believe it might have been stolen recovered however I can't see that being put down as a C when it should be a D.

Anyhow no bother as the body work is very good for it's age putting aside some lacquer peel on the bonnet and roof. The owner I got the car from decided he would carry out a cambelt change back in 2005 and realised when it was dismantled it was past his expertise, so he simply left it parked since. 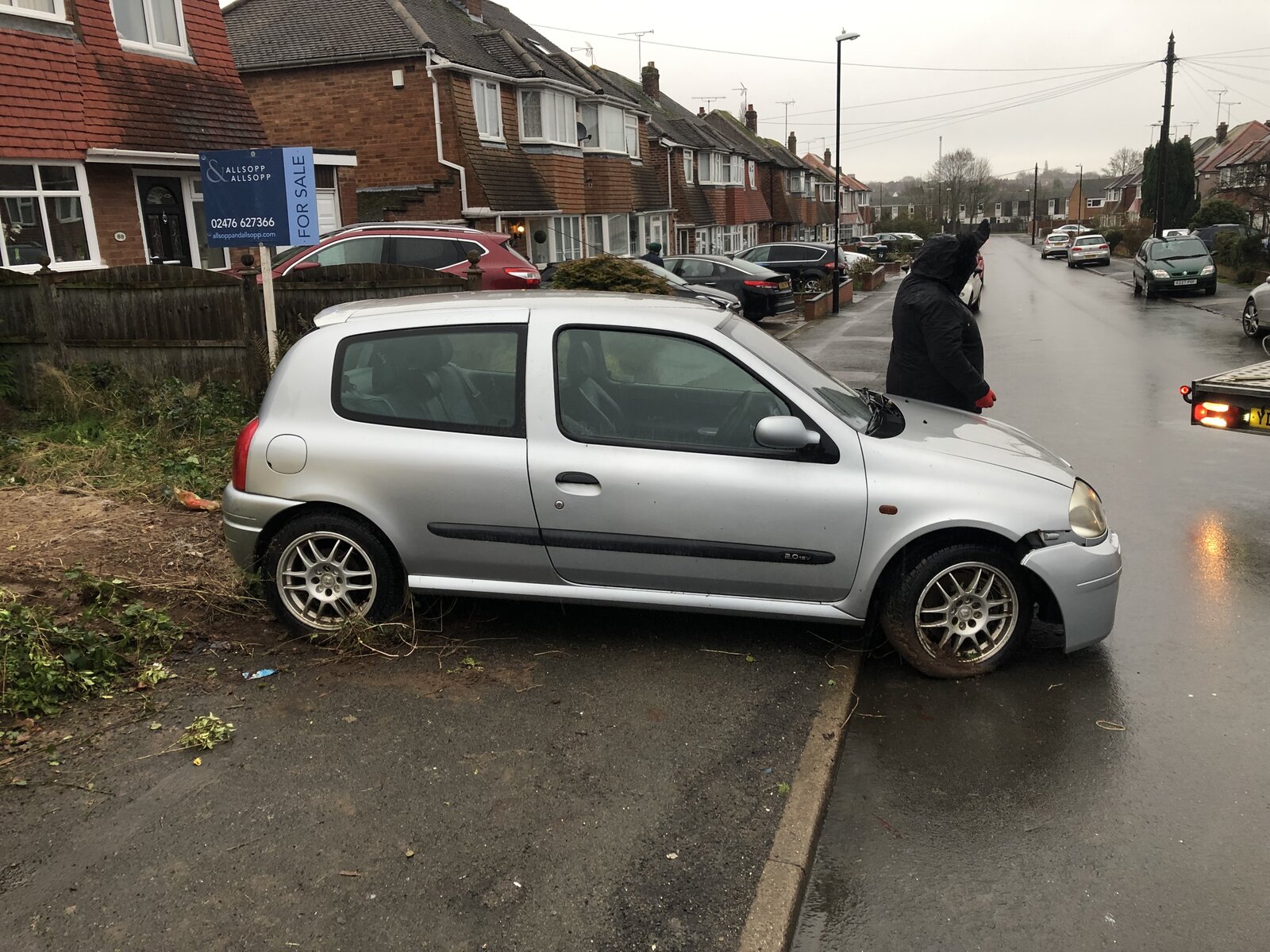 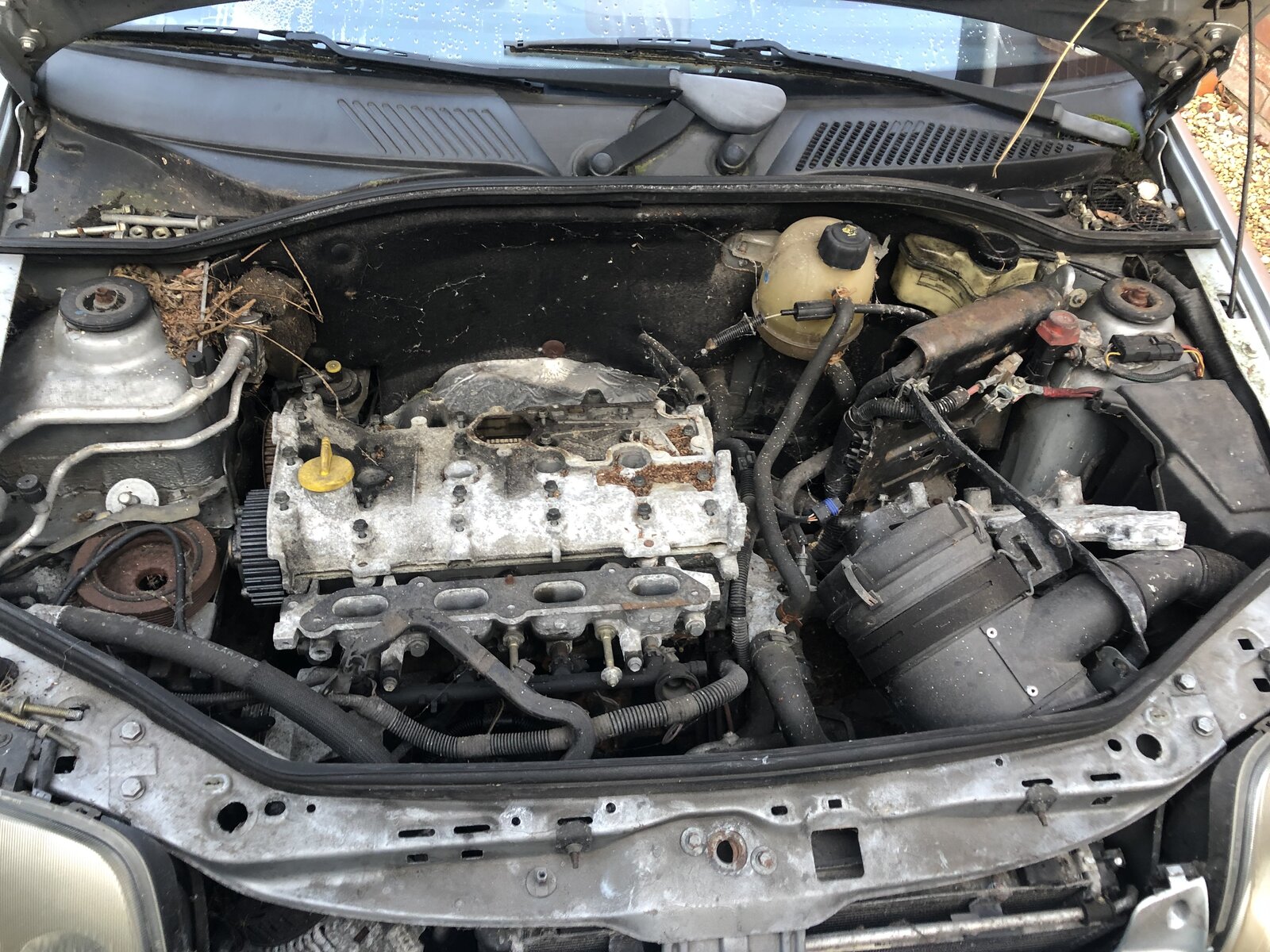 Once the car was home I gave the exterior a well deserved clean and checked the inner arches before I went any further. 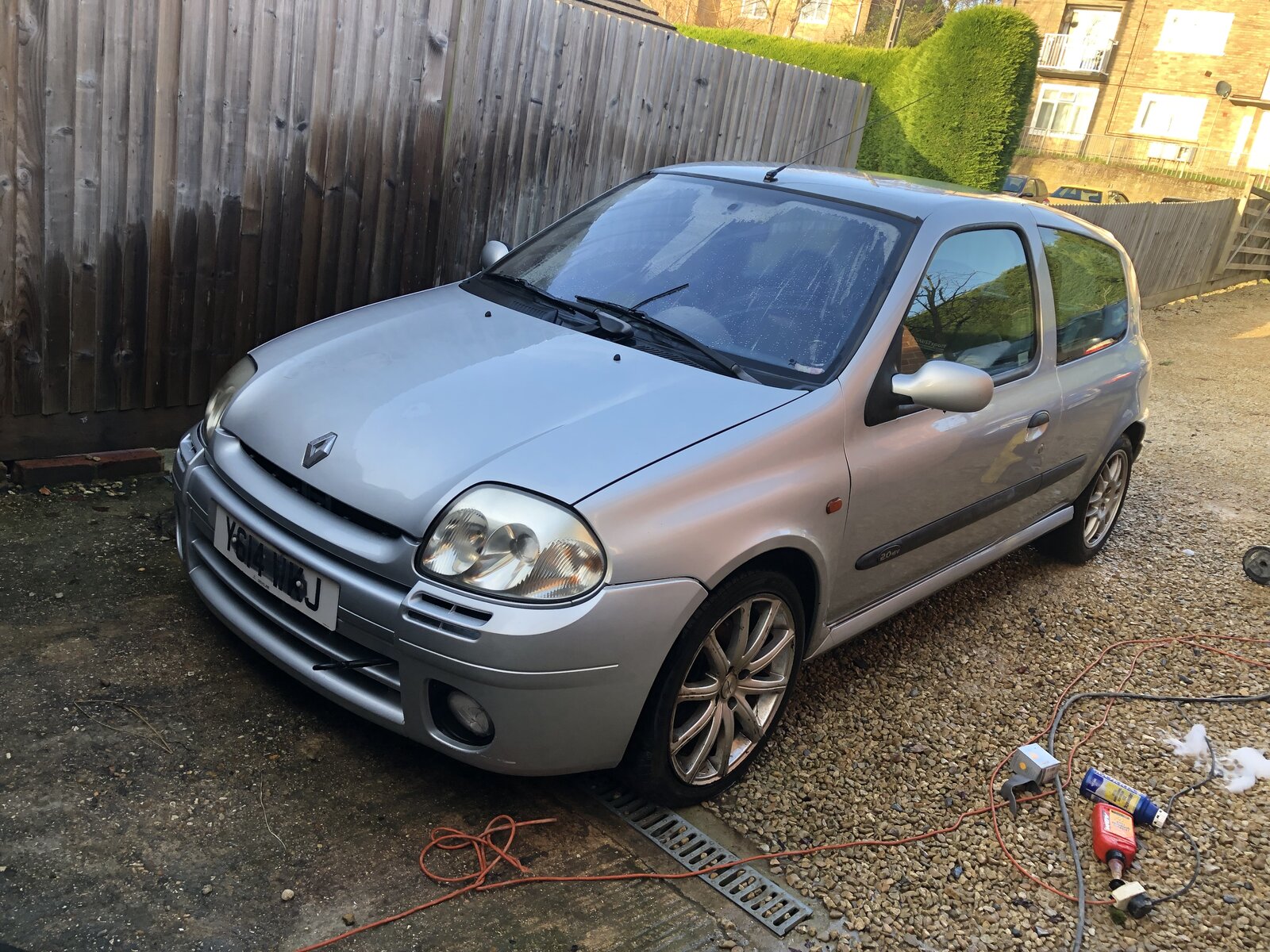 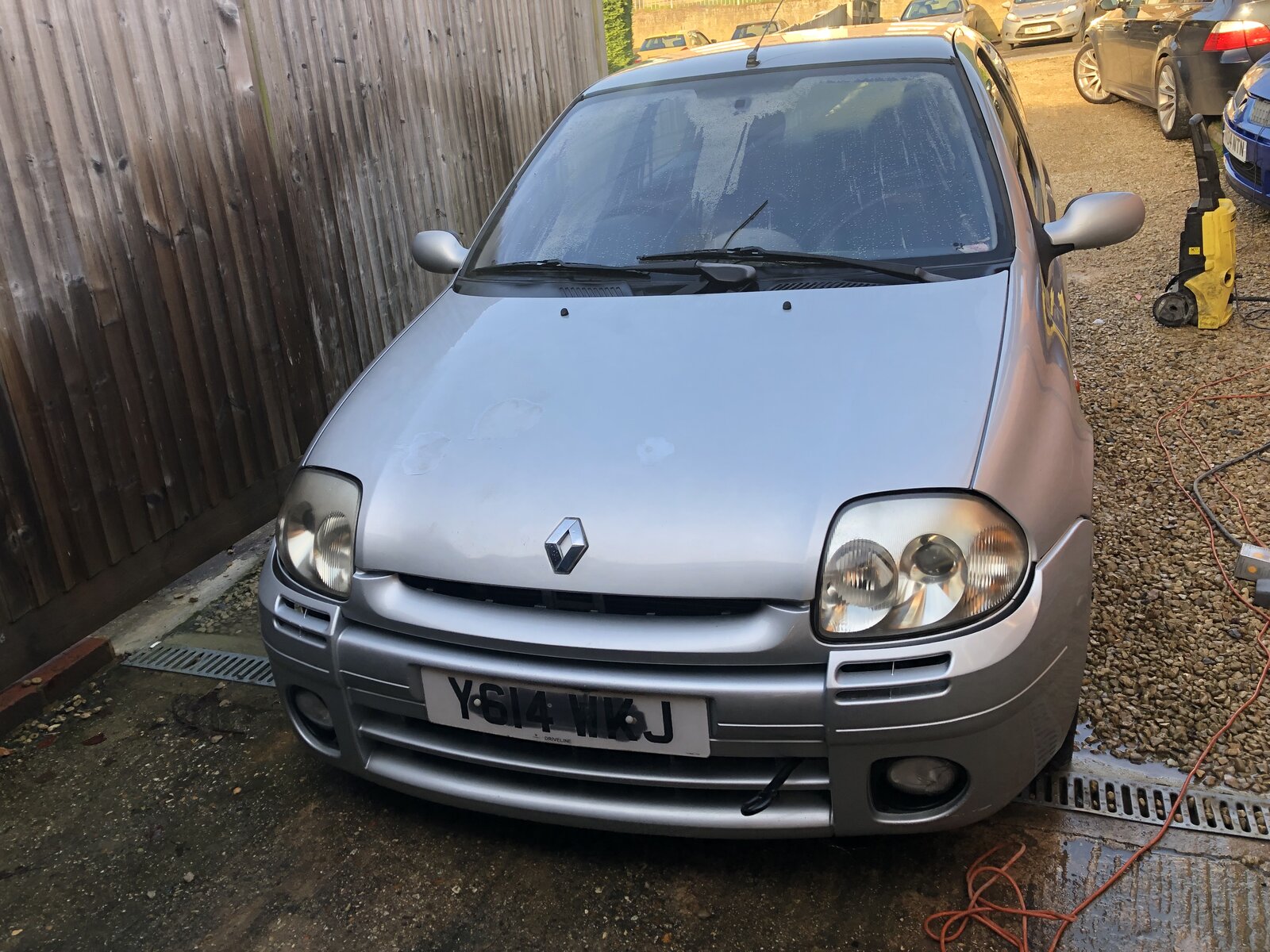 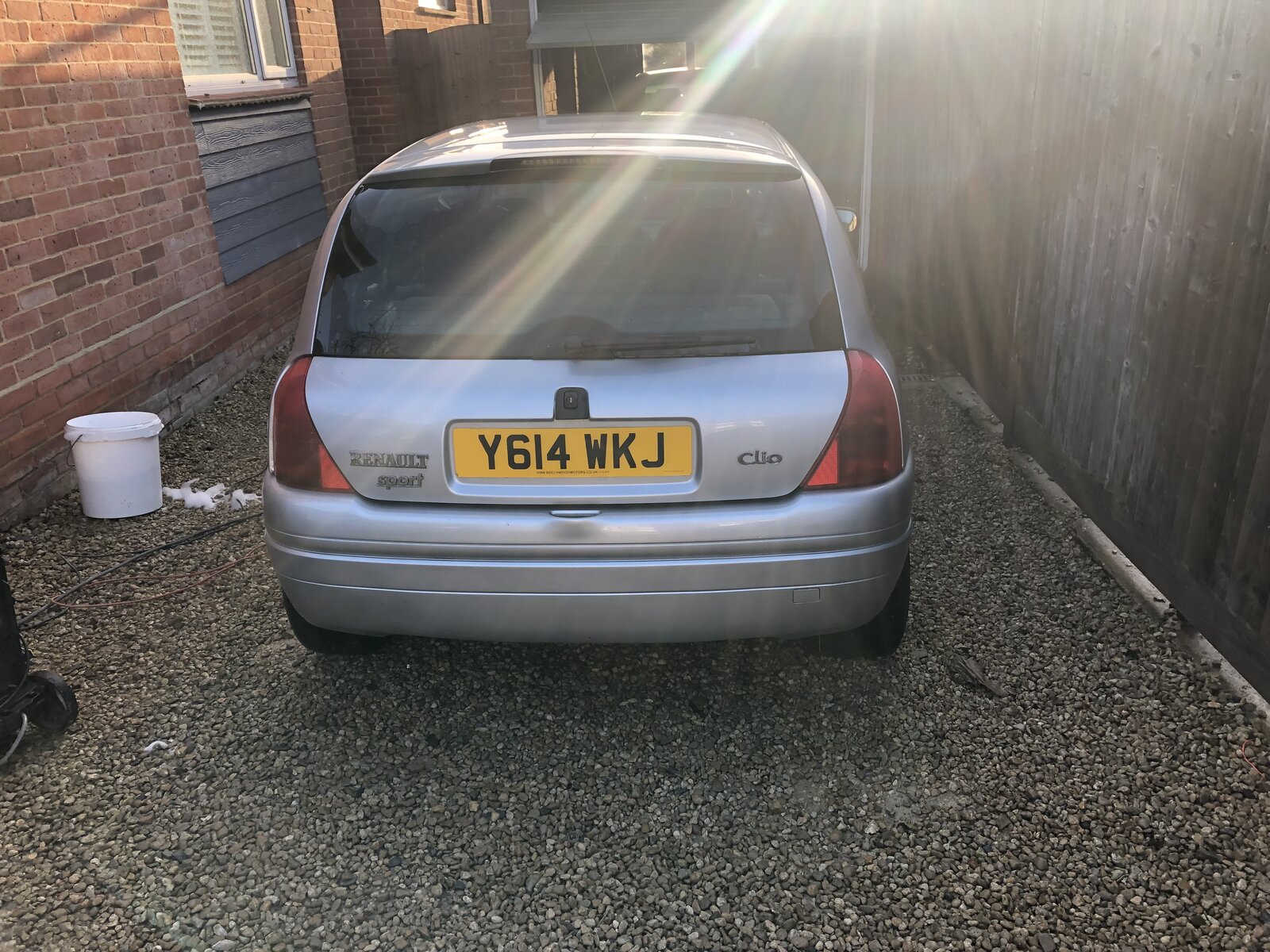 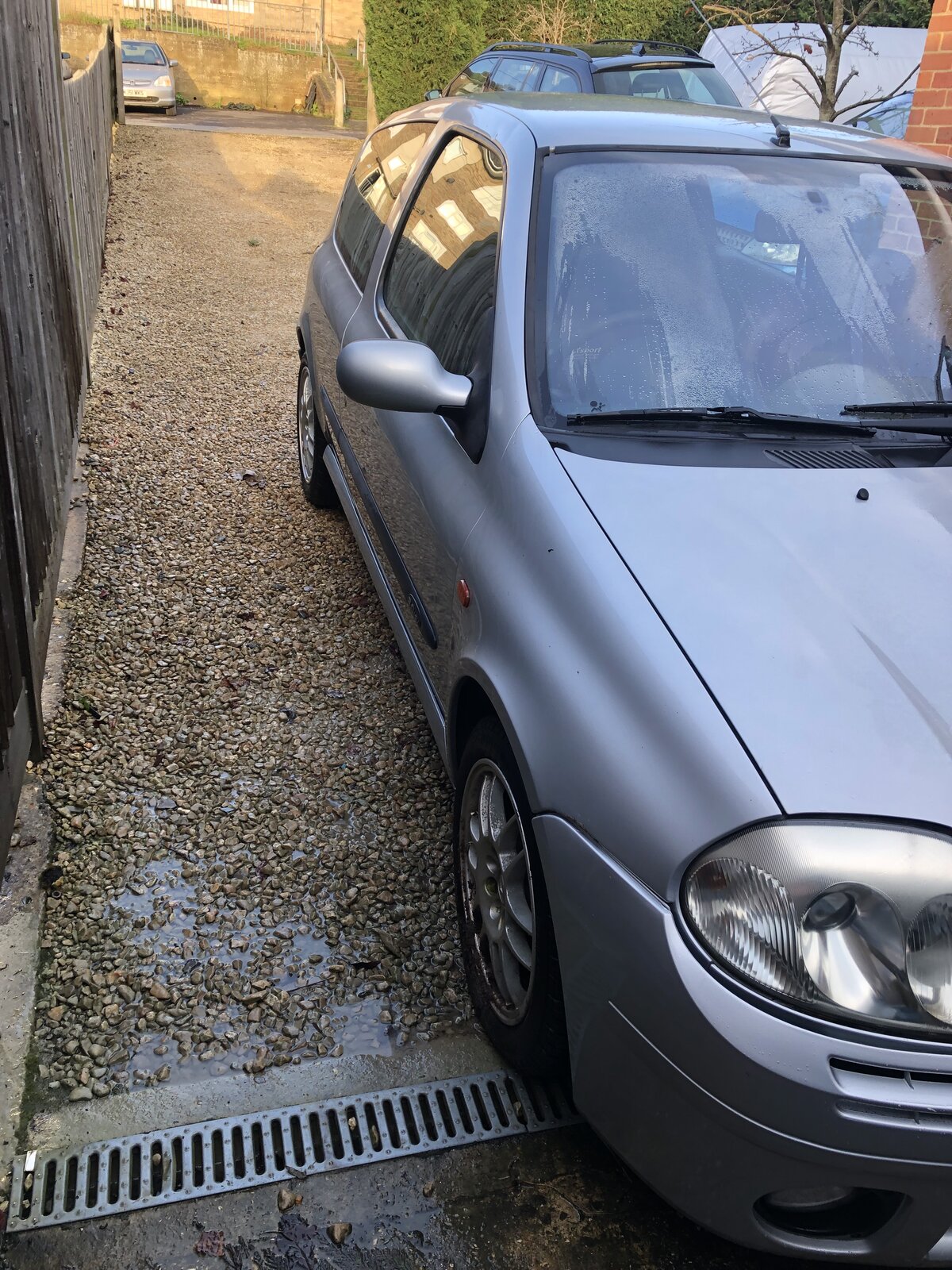 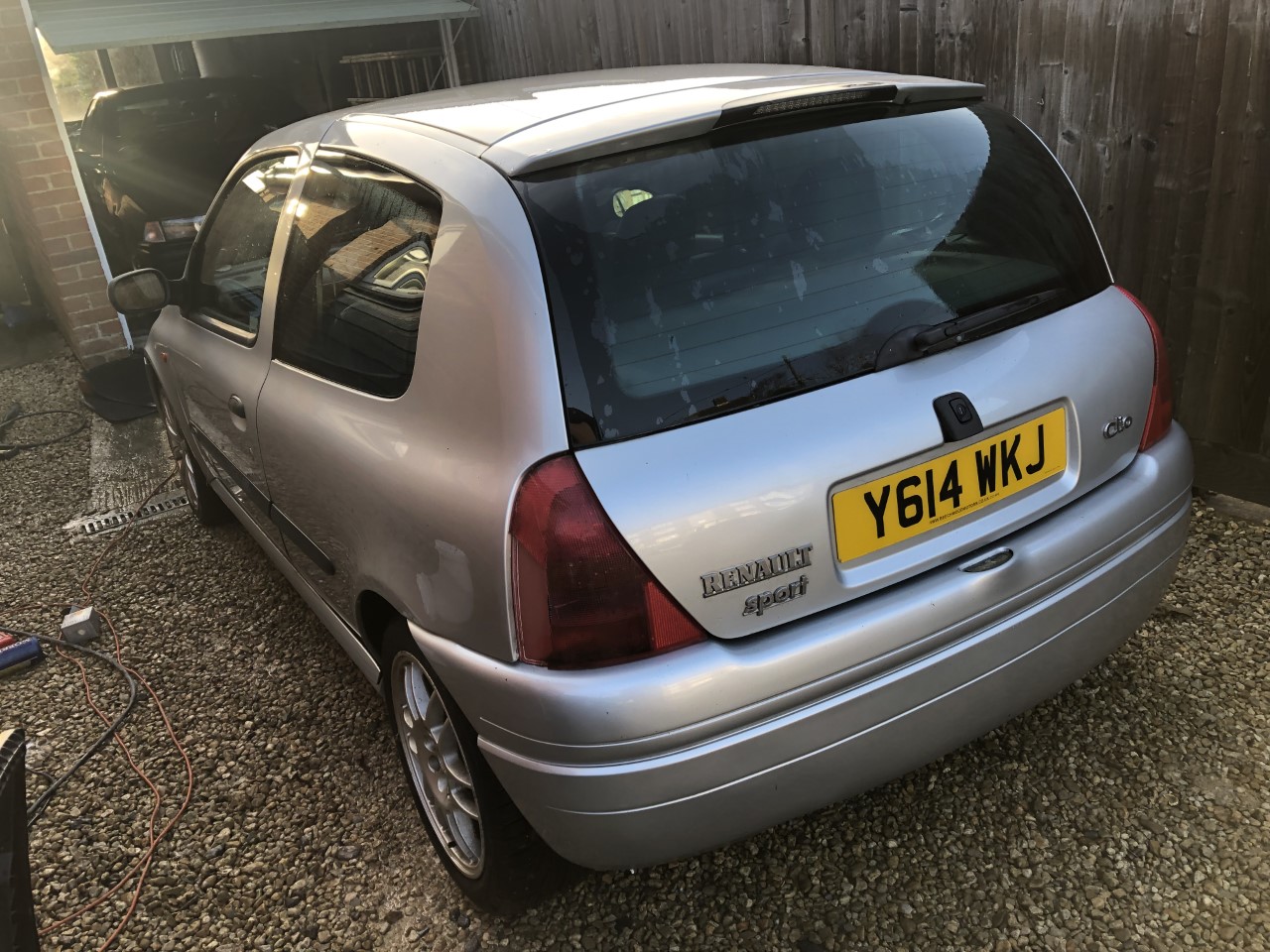 Next was to sort out the swimming in water front foot wells. Checked the outer scuttle panel drains and they were OK, moved onto the center drain and it was blocked at the bottom, once cleared waster pissed out.
A

ClioSport Club Member
Now for the Titanium, when I arrived to sort deal with the Iceburg I spotted another PH1 at the back (lucky or what), it was hard to see the condition of the car as it was caked in s**t and blocked in however I struck a deal and got both of them.

Pic from the day. 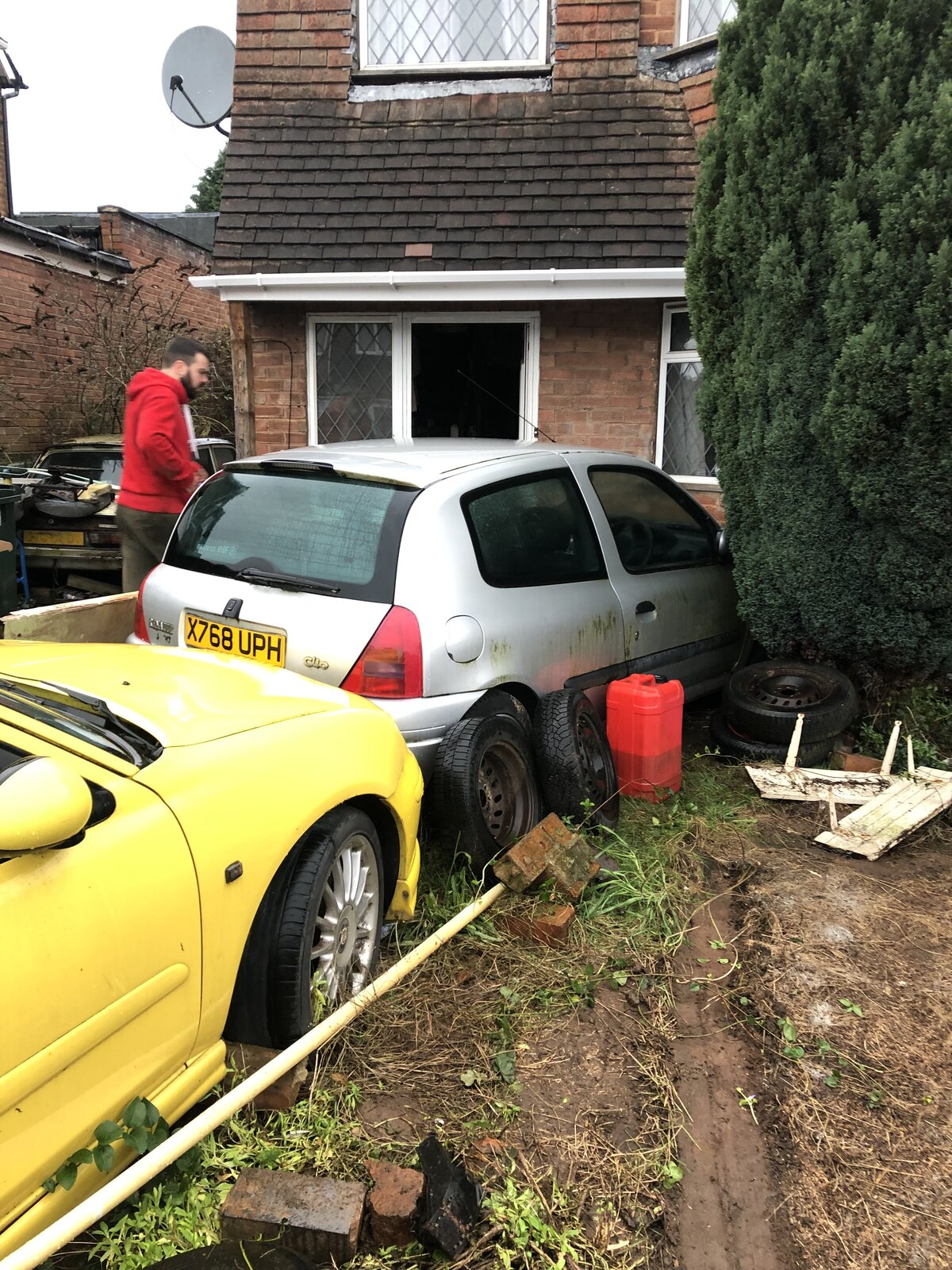 As with the other Phase 1 first thing was first, get the bugger started which I did within the hrs after flushing the fuel, fresh fuel, new battery, and a few other issues which I had to sort which could of cost me the engine within a few minutes. Next was the clean and inner arches check, arches look great however one side might need a little clean up. 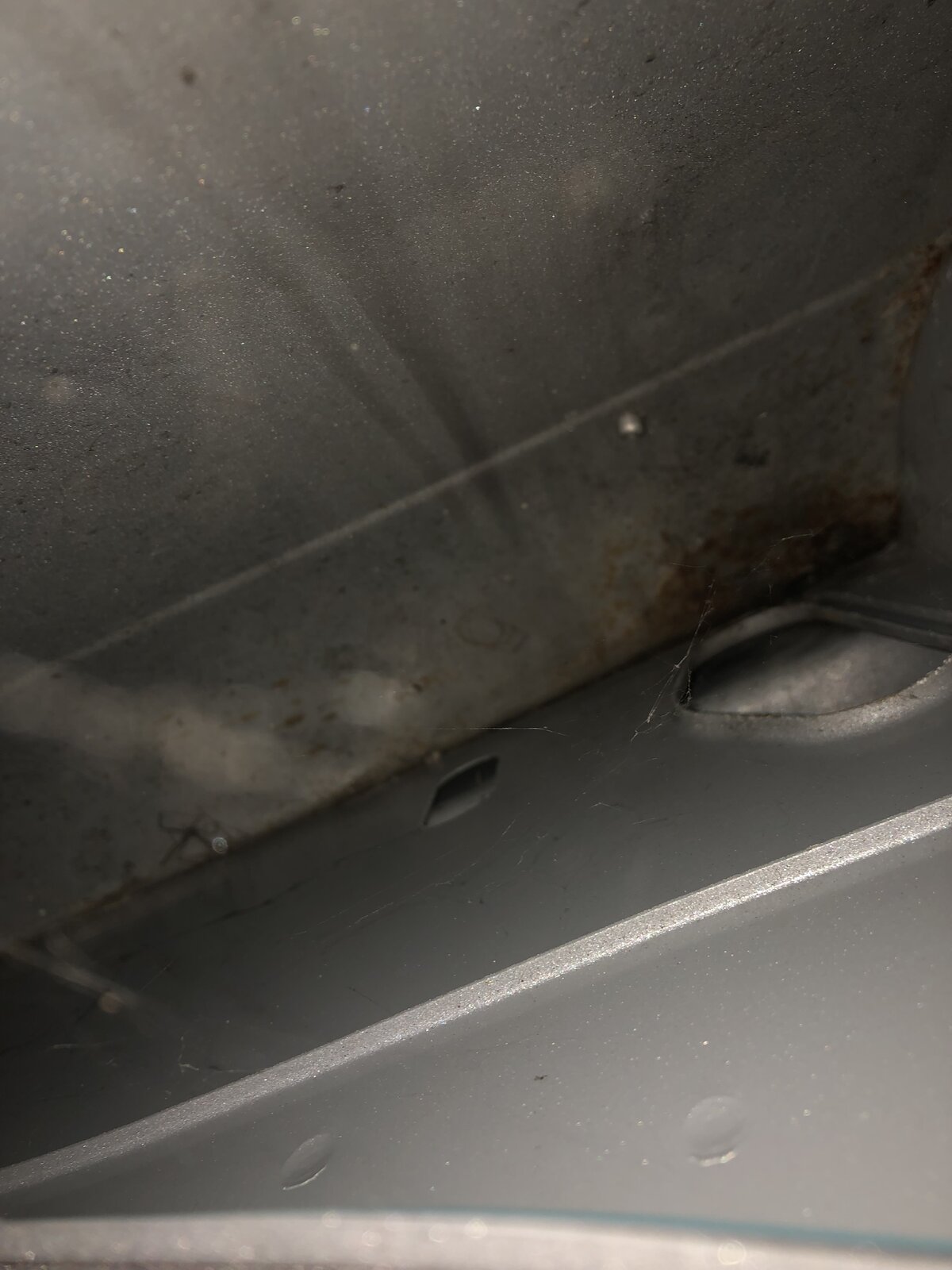 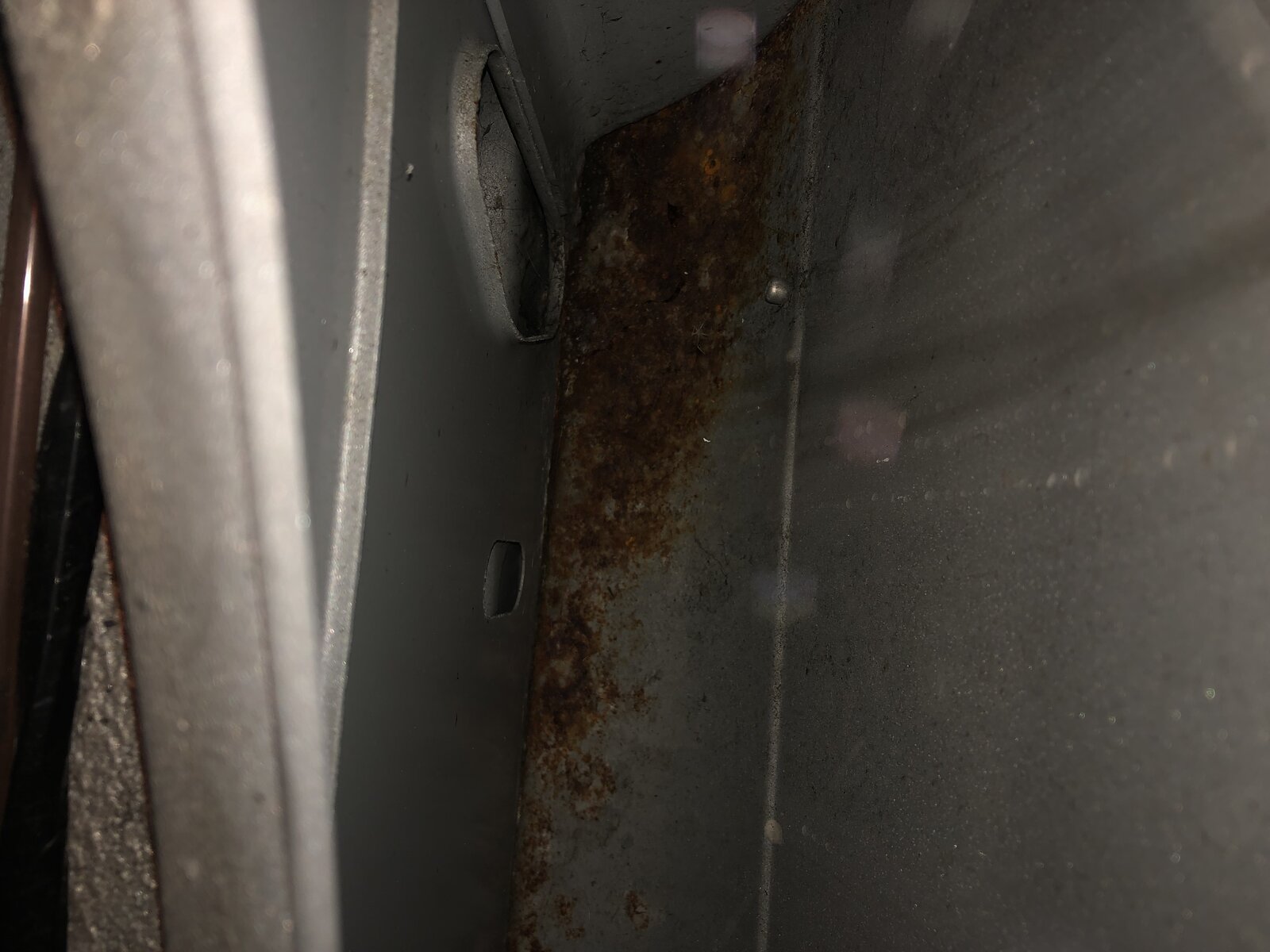 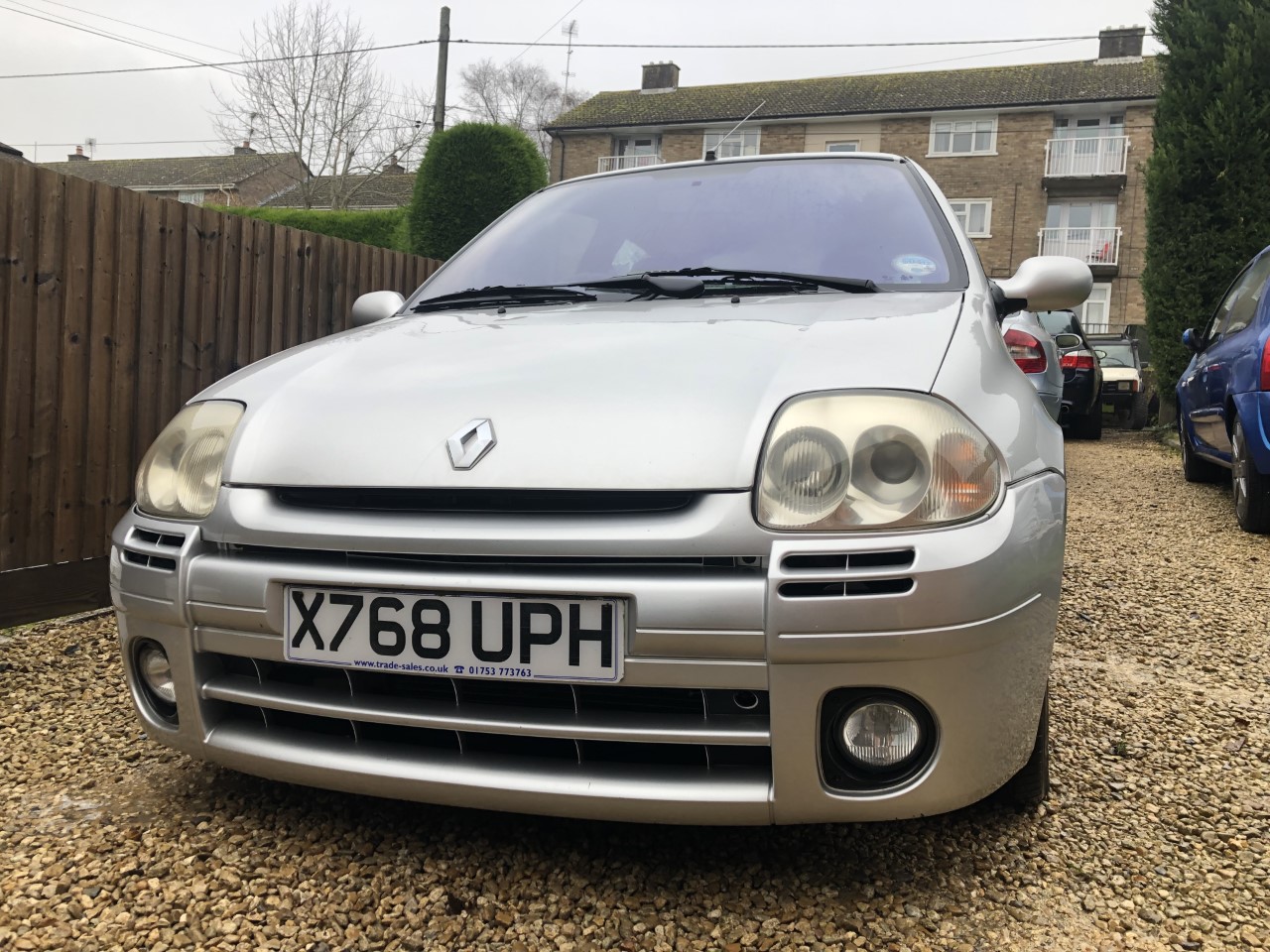 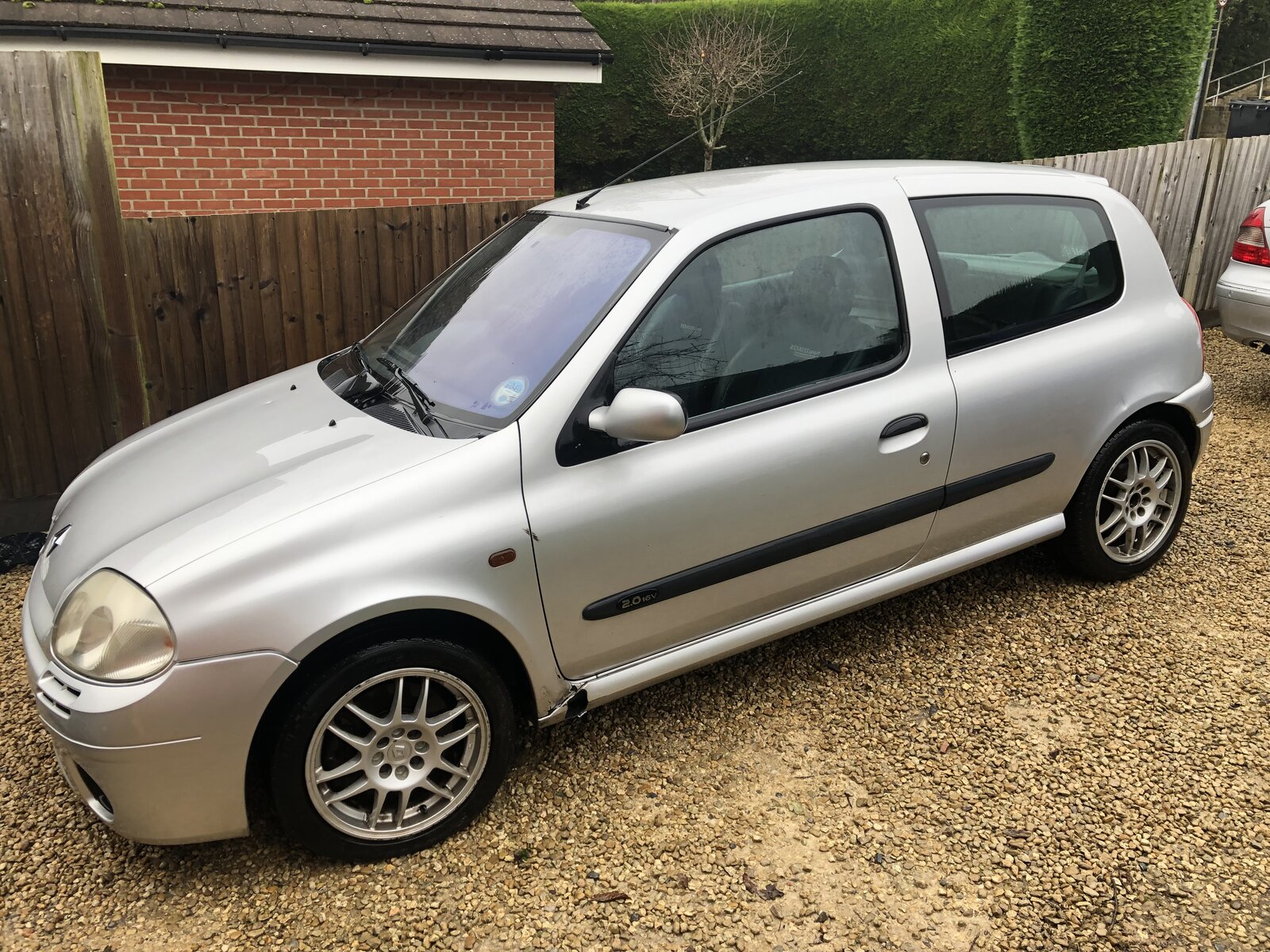 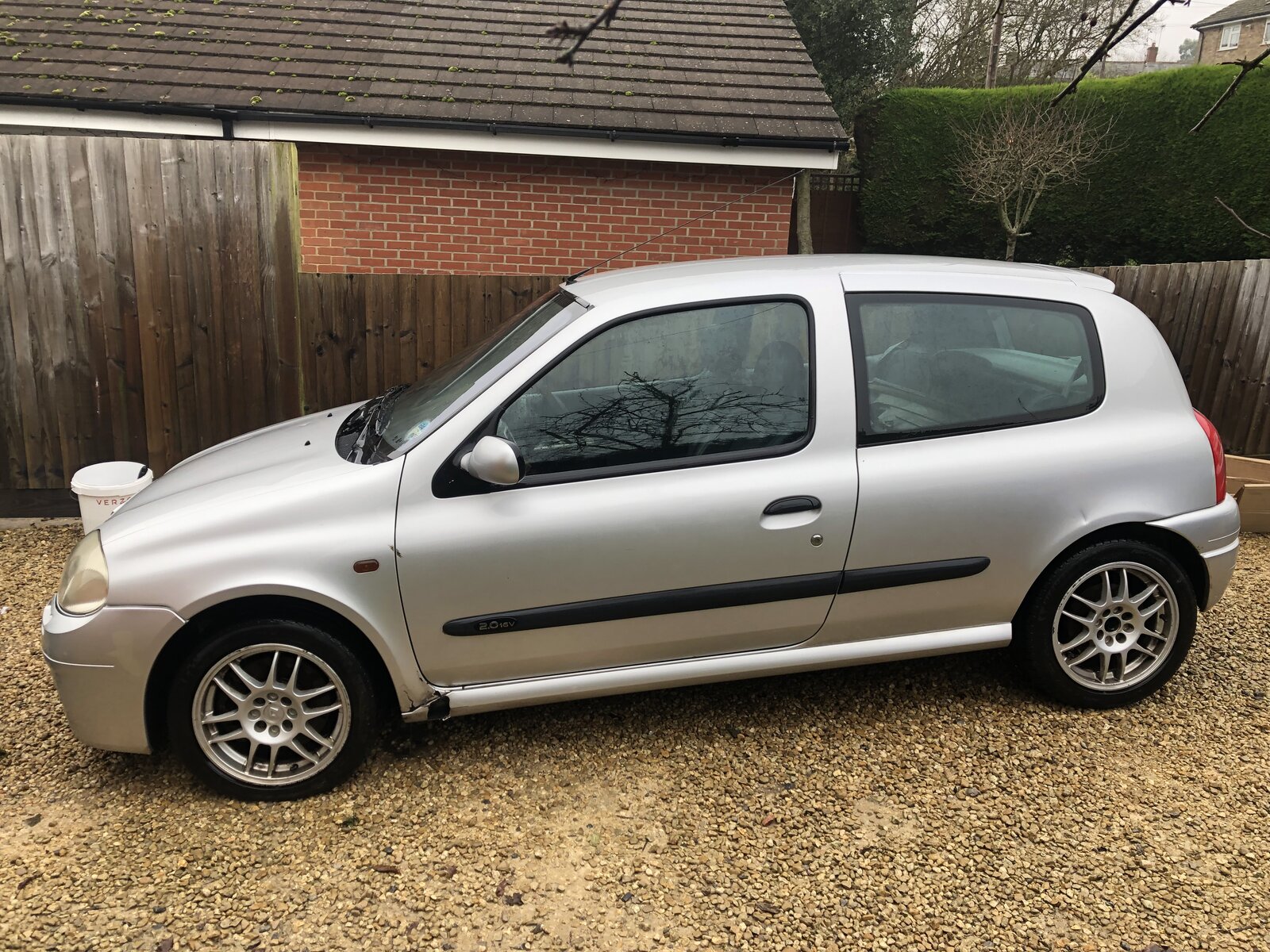 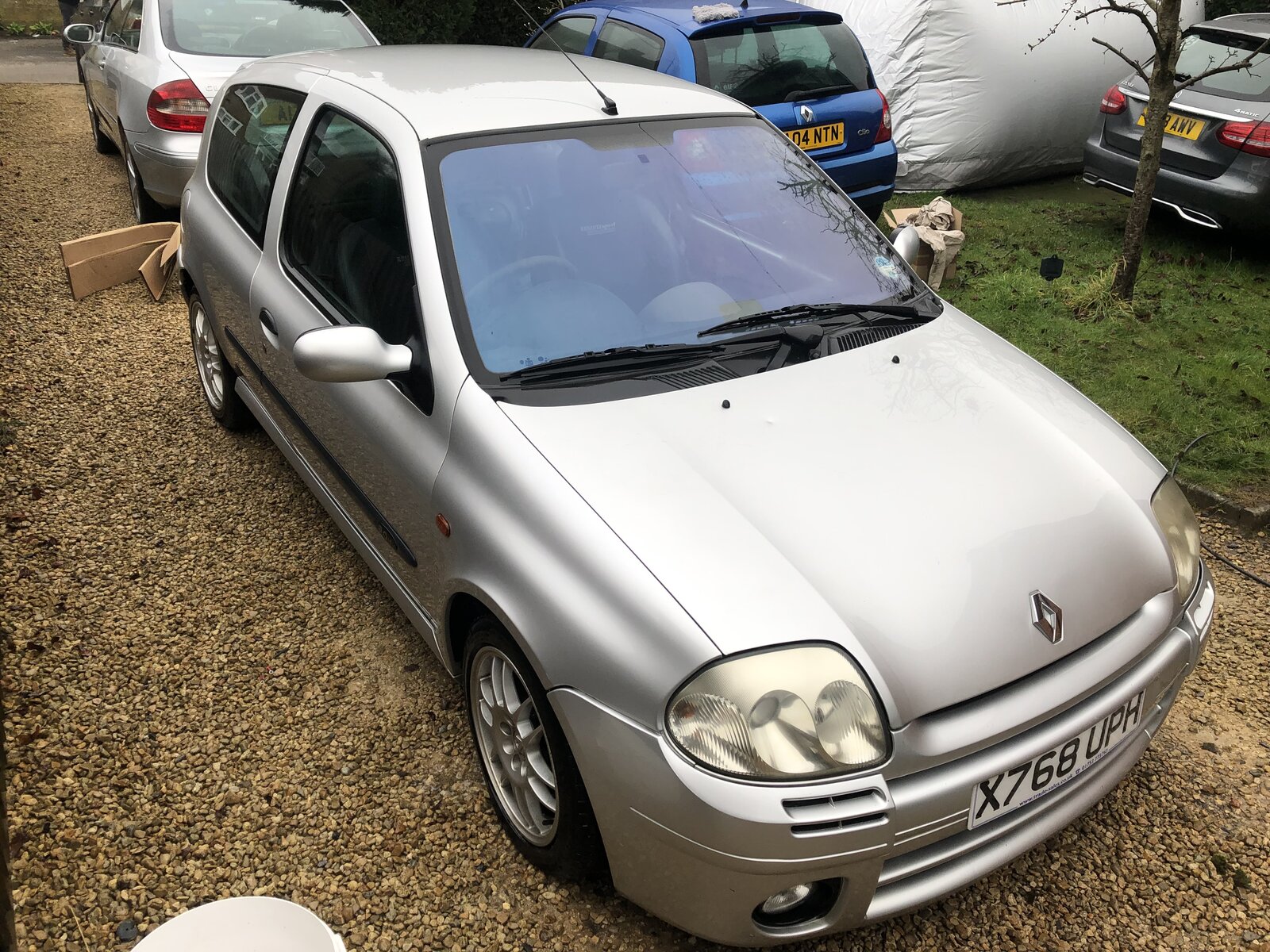 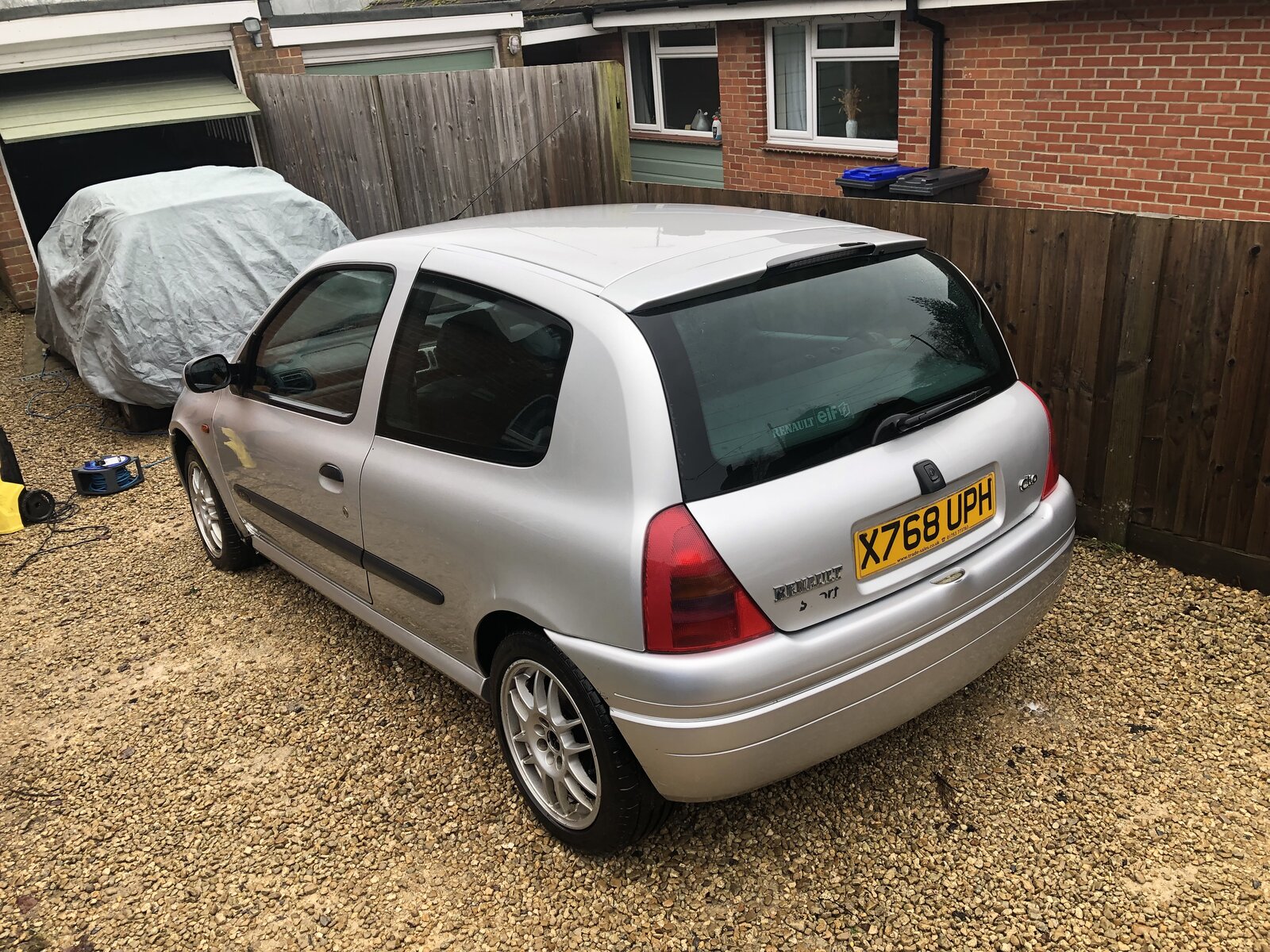 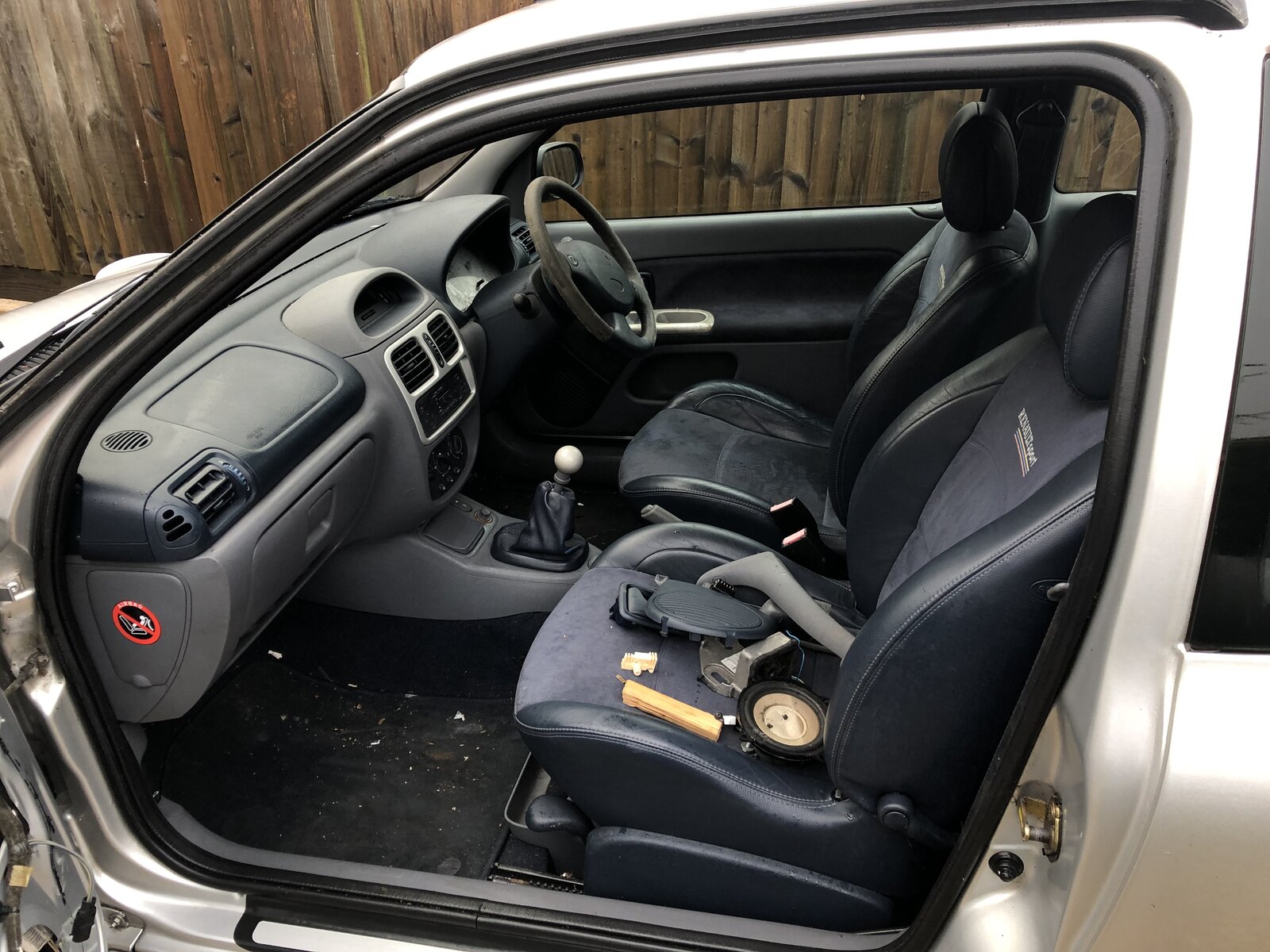 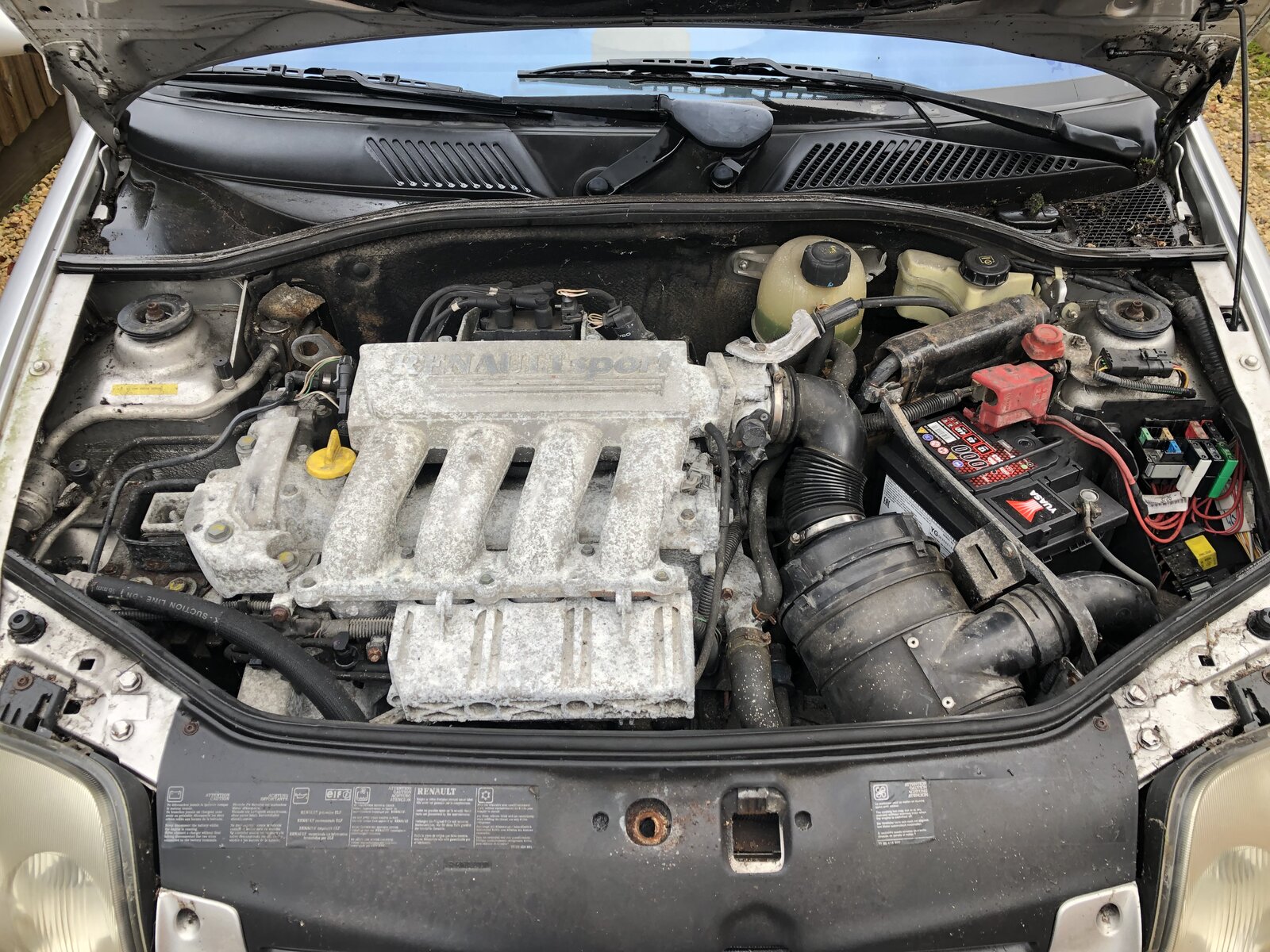 Simply get them back on the road looking great! They will bother under go a full suspension/bush refresh along with belts and other major service items including tyres, discs, pads etc.

If I like the end result enough I will sell the VTS and keep these two or I may sell the Titanium as I love a clean Iceburg. Watch this space.....
R

ClioSport Club Member
If anyone can do it you can! Looking forward to progress mate

Fair play with fixing up these examples, saved from the scrap yard.
A

ClioSport Club Member
They will be very nice examples when I'm done as the base to work off is perfect.
S

ClioSport Area Rep
172 cup
You’re like that other crazy collector that was on here! Chi was it? Different clio every week.

ClioSport Club Member
Who the f**k is chi?

ClioSport Club Member
Megane F7R, Clio 172
WOW... What is the story with them?

ClioSport Club Member
BG 182
So how many are in the Clio museum now then Ant? Kudos for saving them from being broken though, if anyone can save them it's you

ClioSport Club Member
Audi TTS
How many rotting old hot hatches were on the premises you bought them from? Looks like a ZR there as well.

ClioSport Club Member
Sunflower Ph1
Both look great Ant and least not heading for the scrapyard.
However.... Does this mean I don't get my pair of seats now??

ClioSport Club Member
Clio 172 M135i
Great to see these being saved. If I had space id love to do the same.

ClioSport Moderator
Whichever has fuel
Just when I think war torn cities are the worst place to live on Earth, Imagine living next to these clampets!
Fcuking state of the place. 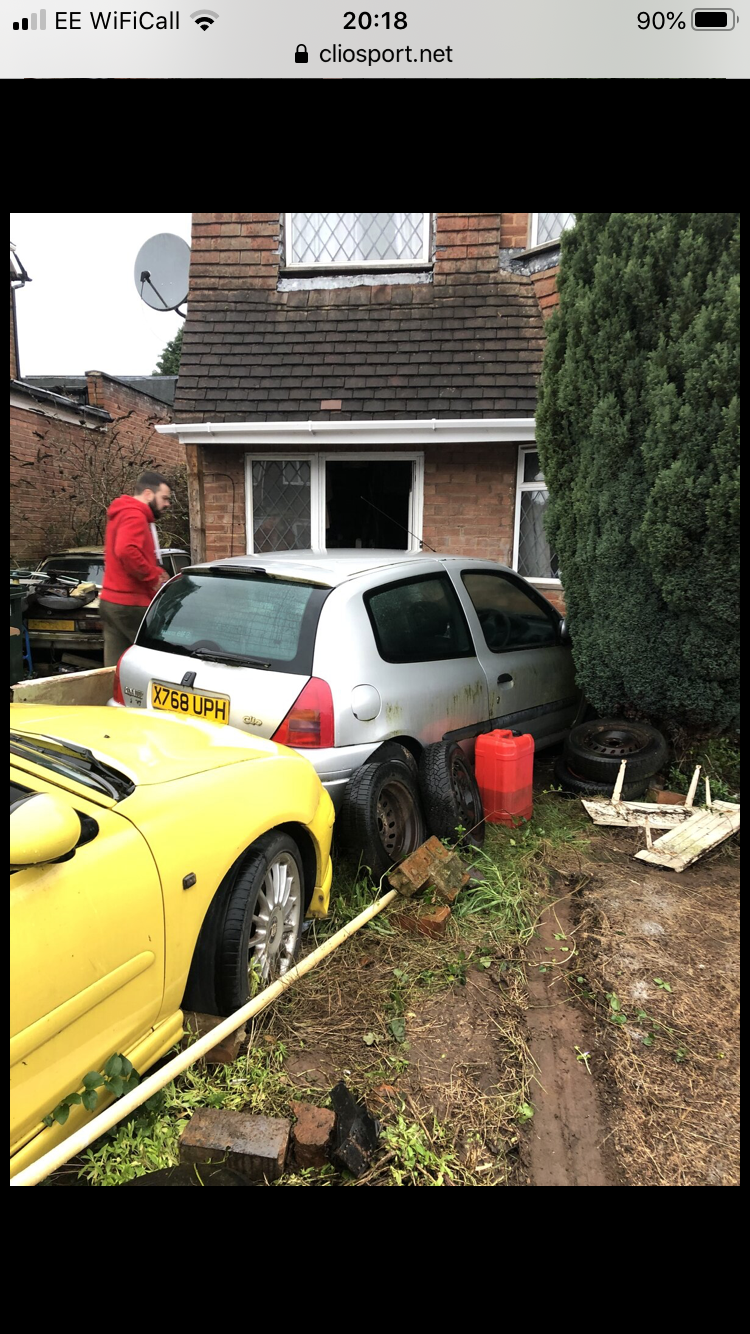 Daniel said:
Just when I think war torn cities are the worst place to live on Earth, Imagine living next to these clampets!
Fcuking state of the place. View attachment 1446339
Click to expand...

I know, street was really nice and this was dumped in the middle. The farther is a hoarder and the kids are clearing it all out. The house is something else.....

Worked out alright for me though

Jack! said:
How many rotting old hot hatches were on the premises you bought them from? Looks like a ZR there as well.
Click to expand...

ZR160, couple of meganes, two rover v8s, spitfire at the back.
A

0ss said:
So how many are in the Clio museum now then Ant? Kudos for saving them from being broken though, if anyone can save them it's you

Only five now which is enough.

ClioSport Club Member
Lots of Scrap...
My old titanium was X936 UPH
A

They haven’t got to it yet, three cars to shift to get access to garage. Garden is a giant thorn bush.

Gives you an idea 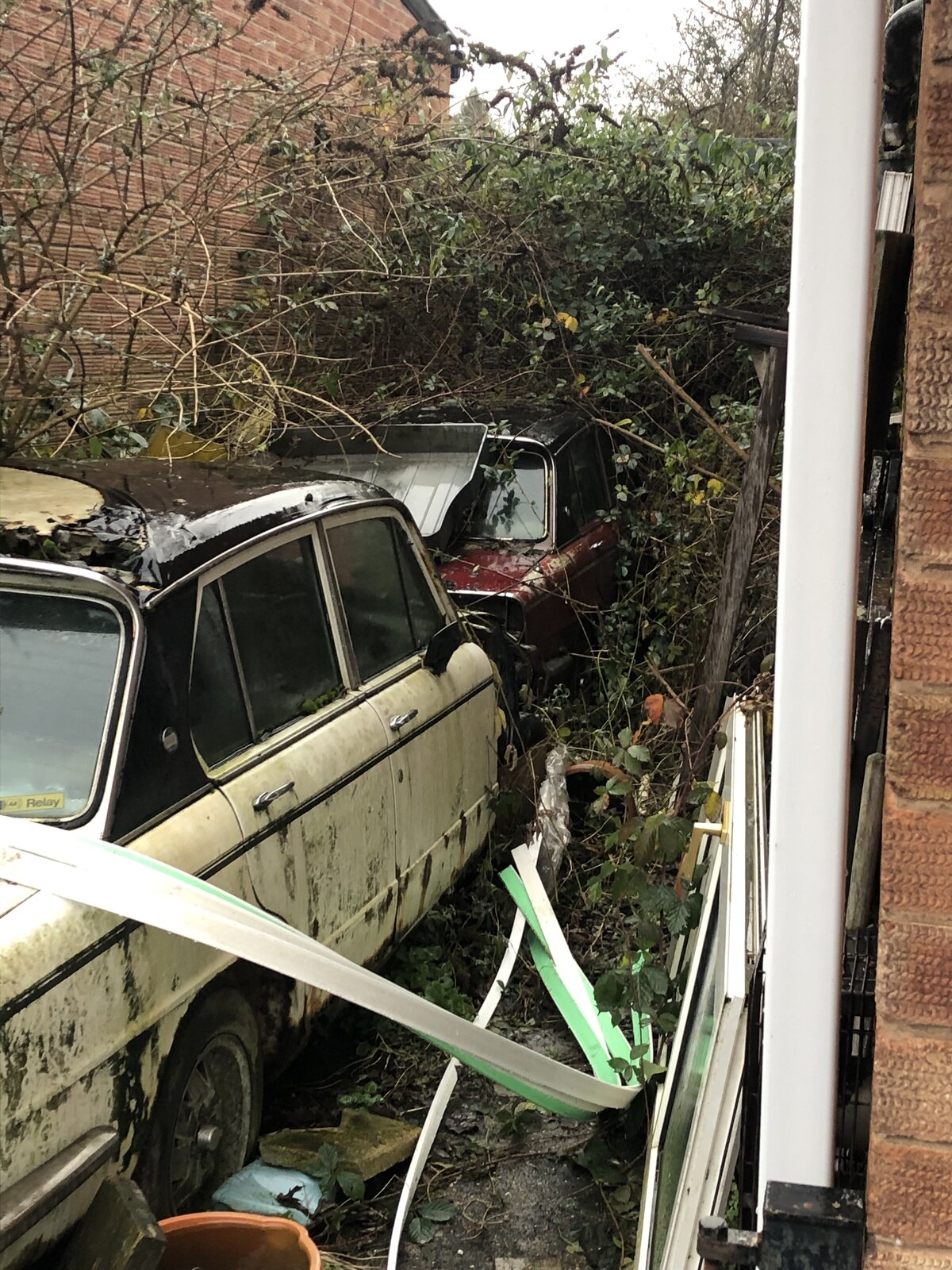 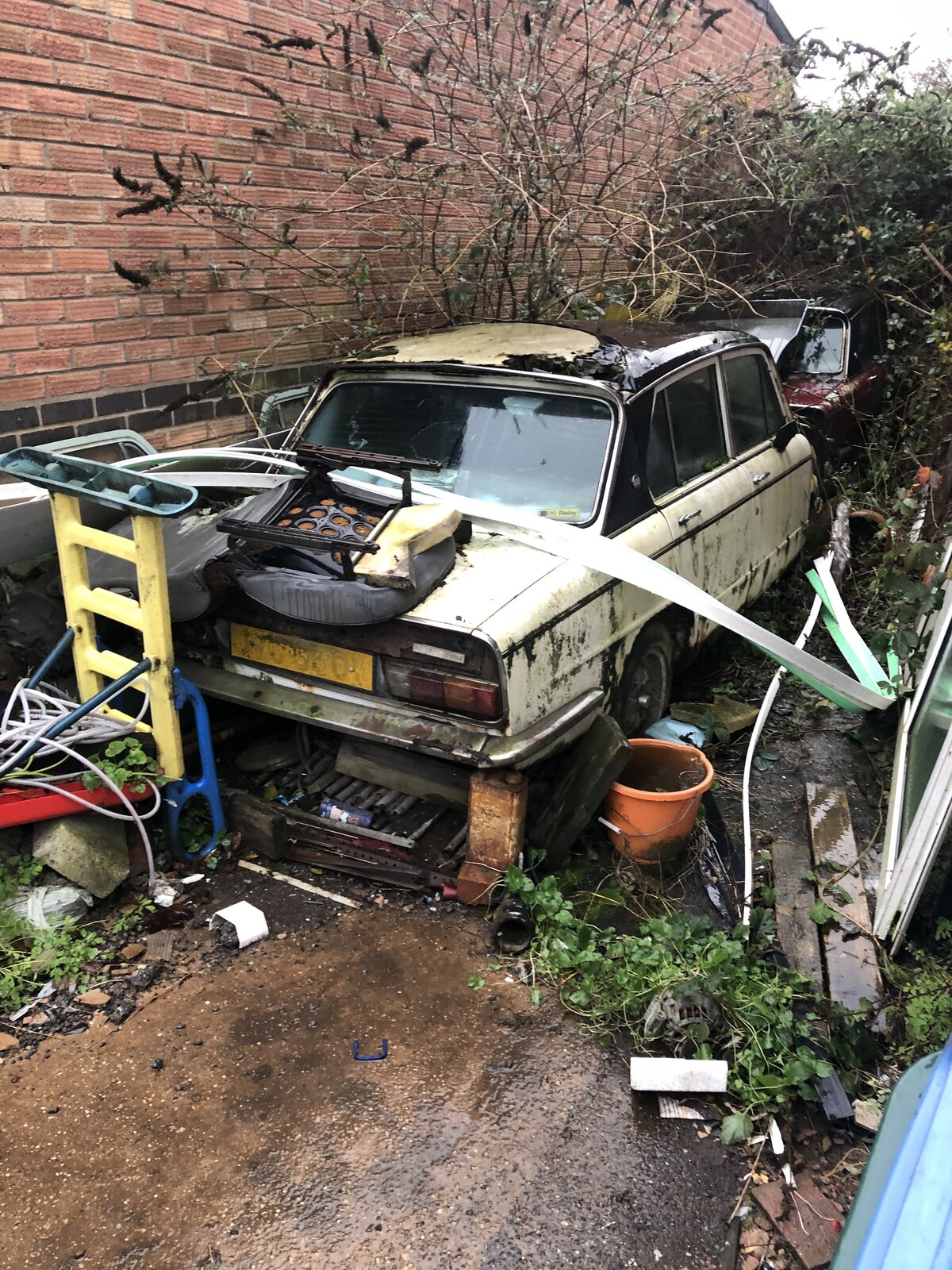 Ant1 said:
They haven’t got to it yet, three cars to shift to get access to garage. Garden is a giant thorn bush.

Gives you an idea

Pair of dolomites those I think, unless theres a spitfire even deeper? Madness! Theyll be very far gone now, rust quicker than ph1s does British leyland steel
A

Louis said:
Pair of dolomites those I think, unless theres a spitfire even deeper? Madness! Theyll be very far gone now, rust quicker than ph1s does British leyland steel
Click to expand...

Yeah it’s past those two in the bush somewhere.....

Ant1 said:
Yeah it’s past those two in the bush somewhere.....
Click to expand...

That's gonna be fucked then

Supposed to be in the shed which can’t be seen

ClioSport Club Member
Mk5 Golf GTI :)
Probably at a programme near you soon.

To far gone i reckon.
A

All I need now is the inlet plastic elbow and that’s the missing bits sorted. Slow going but that’s how it is! 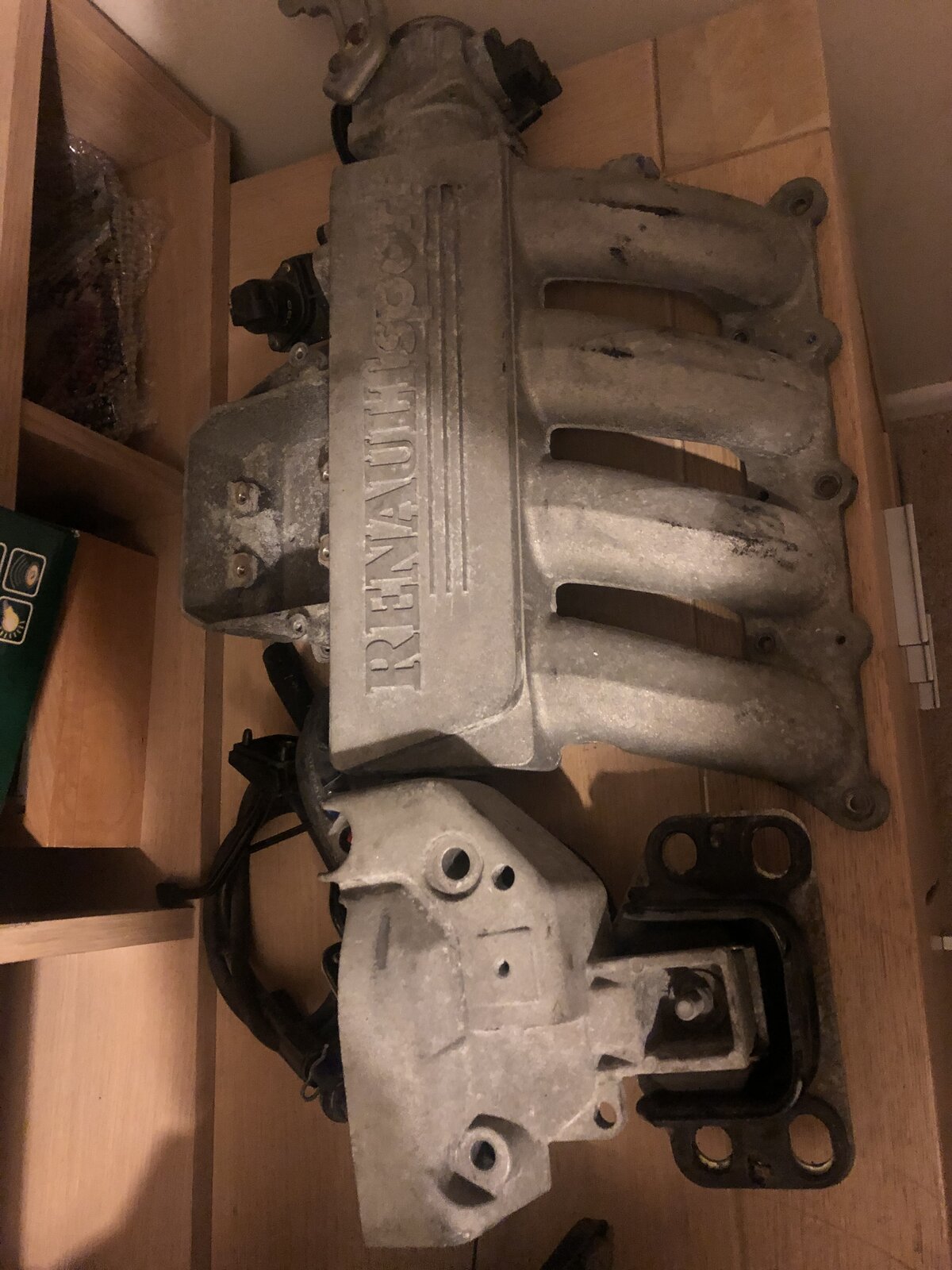 It's just waiting for you to decide you're breaking
A

ClioSport Club Member
If all goes right picking this up for the iceburg. All fresh, low miles, and shinny. 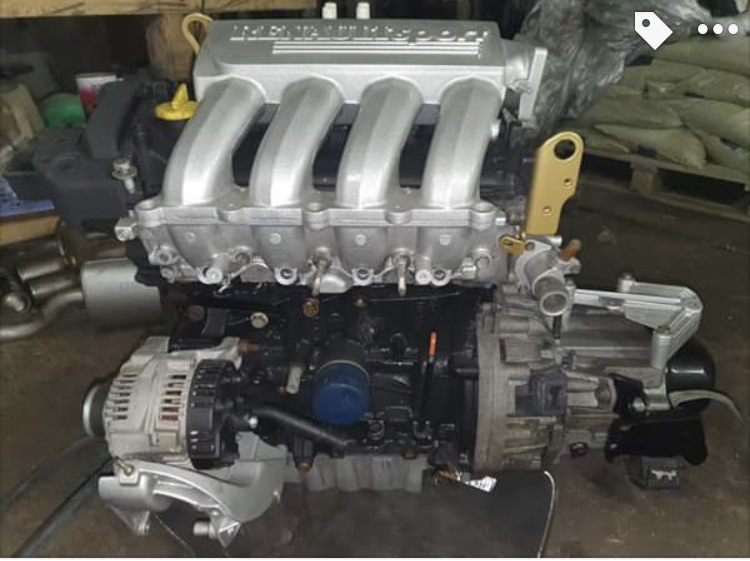 ClioSport Club Member
Meg 175 & Monaco 172
If you need a PH1 inlet elbow then PM me, I'm sure I have one knocking about pal
You must log in or register to reply here.