Seat base or runners?!

Clio sport 182
Hi, I'm after some help... my sport 197 has just failed its mot due to the drivers seat not moving. The garage said I will need a new seat base as they will need to cut through the retaining bolt holding the seat base down. I assumed it was just the runners I'd need but apparently the garage are saying it's the mechanism not functioning. The base is apparently £1500 from Renault!! Or the runners are £262,Has anybody else had this problem? As I've never heard of the seat base being faulty?
D

Golf R
Is it on standard seats and runners?

Try spraying some wd40 about it if they are? (Carefully)

I can already tell the garage are acting the c**t!
J

Clio sport 182
Yea it's the standard seat runners, they fished out 2 x £1 coins in the runner but still doesn't move. I'm just confused as first they said they took the seat out & now they're saying they need to cut the retaining bolt off to free the mechanism which means il need a new seat base I assume.. sounds a lil crazy to me,
D

Golf R
You can unbolt the seats from underneath the car to get a better look at it to see whats fouling it or why its not sliding.

Undo the Torx T20 screw at the back of the plastic rail cover on each side of the seat.

Undo the 13mm nuts that hold the slide rails to seat base. There are three on the tunnel side and two on the door side. 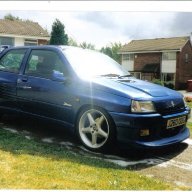 ClioSport Club Member
EVO 6
You can replace your runners if it actually needs them.

ClioSport Moderator
182Turbo,DCi90
All you need is a new sliding rail - they are on ebay or here and do not pay more than £30
J

Clio sport 182
Thanks for the advice. I'm not that handy or confident, so il see if someone can undo the bolts, hopefully this will work, thanks for the help & im definitely not forking out for a new base! Rip off.
You must log in or register to reply here.
Share:
Facebook Twitter Reddit Pinterest Tumblr WhatsApp Email Link