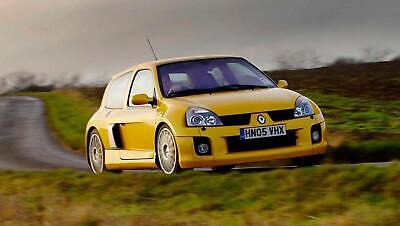 "This lot will be auctioned via Silverstone Auctions, The NEC Classic Motor Show Sale 2022 on Saturday the 12th of November - Sunday the 13th of November, NEC, Birmingham, B40 1NT. , Once dubbed 'the World's smallest supercar' by Evo Magazine, the Renaultsport Clio V6 255 remains a motoring oddity if there ever was one. Renault took a big, Laguna derived 3-litre V6 engine producing 255bhp and 221lb/ft torque, dropped it in the middle of the short Clio chassis, hooked up a rear-wheel drive system and mated it to a 6-speed manual transmission. If that wasn’t enough, it looks like they then injected styling steroids into the bodywork to give it that wide, aggressive stance and put it out to the world in 2001, with the Phase 2 being revealed as an even sharper variant in 2003.Early models had a reputation for spikiness on the limit, but the car became more refined with time and later V6s managed to be both usable and better to drive than earlier models. Both guises (230 Phase 1 and 255 Phase 2) stand out on the road with levels of charm achieved by few other cars - and rising prices suggest the market didn’t take long to catch on to their value as drivers' cars. At the time of its release, the Phase 2 was the most powerful hot hatch ever made. Only 1,309 Clio V6 255 Phase 2s were built for the global market with only 21 of them being specified in Acid Yellow, with eight of those 21 making their way to the UK. It is an undeniably early 2000s look with the bold colour scheme, but with such a bonkers car it seems to suit it and make sense. A Phase 2 Clio V6 is a rare car at the best of times, but to be one of just eight cars ever to come to the UK in this colour combination stands it above the rest, especially considering its covered just 13,250 miles at time of consignment in the hands of its four previous keepers. For a car that’s moved so little, the history file is meticulous including lots of invoices for work and maintenance undertaken, most recently in March 2021 when it received a new cambelt, pulley kit and water pump, fitted by East Bilney Garage at a cost of ?1,348. There is also the Renault embossed leather folder and service book accompanying the various invoices. Presenting in very good condition, representative of the low mileage, the paintwork presents well, as does the interior showing it has been looked after and cherished from day one. Once described by Evo Magazine as one of the greatest cars Renault have ever offered, the Clio V6 is very quickly (and deservedly) achieving cult status and must be worthy of a slot in any serious collection. With its stunning colours, low mileage, and quintessentially French design, and signed by the Clio V6's designer, perfectly encapsulating the essence of modern mid-engined motoring 21 years ago, will no doubt make this a classic in the future."

ClioSport Club Member
Trader Rating - 100%
5   0   0
Shrekmobile
Why spend all that money when you can get this for a fraction of the price.

Richard_UK said:
Why spend all that money when you can get this for a fraction of the price.

Richard_UK said:
Why spend all that money when you can get this for a fraction of the price.

Credit where credit is due mind, that’s probably the best V6 rep I’ve seen. it will absolutely never sell for 20k though

SteveC_1879 said:
Credit where credit is due mind, that’s probably the best V6 rep I’ve seen. it will absolutely never sell for 20k though

ClioSport Club Member
Trader Rating - 0%
0   0   0
Boostvagn.
Are the Renault Sport stickers on the side original? I don’t seem to remember them.

Smoothie Claymore said:
Are the Renault Sport stickers on the side original? I don’t seem to remember them.
Click to expand...

Don't think so, the design is too modern to have been original isn't it?

Cars like this make me sad, such an unusual bit of kit and it's barely moved.

Would it be better if it was tho?

ClioSport Club Member
Trader Rating - 100%
45   0   0
Too Many
To be fair the Yellow "Fake" V6 is prob worth more in parts if they are genuine Renault parts (bumpers, side pods Side skirts etc)
You must log in or register to reply here.

3 liquid yellow coming out of Calais