Clio
Hi all
First time poster and complete novice when it comes to cars other than driving one I'm clueless so please bear with me...

I locked my 04 Clio today using the central locking but on the key and there was a terrible grinding noise, which I traced to the boot.

Both doors lock fine but the boot doesn't(obviously related to the grinding noise). I know I'll likely have to take to a garage if I want repairing but I was wondering if there is any way of manually locking the boot just for security in the meantime as it is otherwise left unlocked constantly...

Thanks in advance for your help/advice guys.

Depending on where you park try and reverse close to another car or wall etc so no access to the boot. 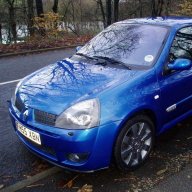 ClioSport Club Member
FF Jeden Osiem Dwa
Tbh , I wouldn't worry too much about the security side of things . I would imagine someone who wants to steal a car would always try the drivers/ passenger door . If they find them locked I doubt very much they'll think " I know , I'll see if the boots unlocked ". But obviously , it needs fixing sooner rather than later .
As imprezzaworks says , sounds like the boot solonoid is cream crackered .

ClioSport Club Member
Trophy,V6,5GT,AG200
As said it sounds like the boot solenoid given up. Dead simple to change - don't take it to a garage as they will rob you. Where are you? I have a couple of solenoid here.
S

Clio
Hi guys thanks for all your replies much appreciated.

Stuart Maclean said:
Hi guys thanks for all your replies much appreciated.