Hi all,
Used to run -1.5 degrees of camber on the front for years without camber bolts, 172 ph2, slightly lowered on Sportslines.
Lately I was curious to run more camber - fitted camber bolts and went for about 2.5 degrees, tracking was done in a decent place.
Caster was and remained at about 3, Toe was 0 before and adjusted to 0 again after dialing in more camber - so nothing changed except camber.
Immediately I noticed significantly more grip cornering, the car became much more tail happy as well.
But what was also noticed immediately, is losing almost all of the steering wheel feedback when cornering on the limit!
It centers exactly the same as before, tramlines exactly the same as before, turns in the same, but has almost no feel at all - which should be one of the strongest points of the clio, and I always had amazing feedback when cornering on the limit before.
Also noticed a massive reduction in braking grip, so much more than I expected, as many here seem to run 3 degrees camber on track and not complain on braking performance.
I've been running this setup long enough, on the same roads and tracks I'm used to, so it's not a placebo thing.
Obviously the answer is to change back to what I liked before, but the additional cornering grip in the front is amazing.
Did anyone else experience the same, or am I missing anything?

ClioSport Club Member
Titanium 182
Needs some toe out to add some weight to the steering.
S

182 attempt #2
Yeah zero toe on the front is an odd choice for these.

I tried 2.5 deg once, albeit with 12min toe out, and like yourself I kept toe the same and made no other changes for a fair back-to-back. I found the front end loaded up very suddenly once you achieve X deg of body roll and then find yourself wanting to wind steering lock off after initial turn in (exactly as you’d expect). Although it was probably quicker the non-linear response made the car feel less predictable so went back to 1.5.
C

I'm using zero toe to avoid tramlining, also using a 330mm steering wheel makes it sharp enough for me.
Did you experience the same with losing steering feedback and braking?
B 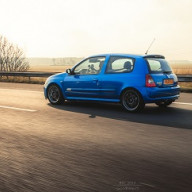 ClioSport Club Member
FF Arctic blue 182
Once ran max camber for a week after changing shocks.
Pretty much what you describe, also tyresqueal everywhere.
Logical, with about 3deg you'running on maybe half the tyre?
You must log in or register to reply here.
Share:
Facebook Twitter Reddit Pinterest Tumblr WhatsApp Email Link