ClioSport Club Member
Racing Blue 182
Does anybody know if this part of the shell will be accessible for dent removal?

My iPhone couldn't seem to capture the angle of the dent properly. I have put my hand up the inside arch but cannot reach up towards the dent. I've just had some repairs done recently and I've cocome back from a day out today to find someone has kindly left another dent. Really does put me in a sh!t mood
J

ClioSport Club Member
Racing Blue 182
That's what I was hoping but as anyone would, I'd be gutted if they couldn't just thought I'd ask on here if anyone had similar and had them taken out. I need convincing and cheering up
G

BG 182
Yeah I think its accessible mate, they can get into all nooks and cranny's unless its double bonded I think.

I've got 3 in pretty much the same place as yours drivers side and I'm waiting to get them taken out they do my head in.

I think the whole rear speaker cover is ripped off and the dent tool slides in to where it can reach.
G

BG 182
This will cheer you up slightly lol, where all there from when i bought the car, just took it into consideration knowing there not that bad and hopefully they will all be taken out, got these 4, there not bad just dings.

Then theres a 5p dent in the drivers B pillar, one small ding on the other side rear which some t**t gave me recently , then 3 stone dents on the bonnet... Youve made me pull my finger out and edit the pics so i can send them to a few PDR people and hope for a decent quote. Last time i paid 110 for 5 dents and they wernt really dings they where big dents. 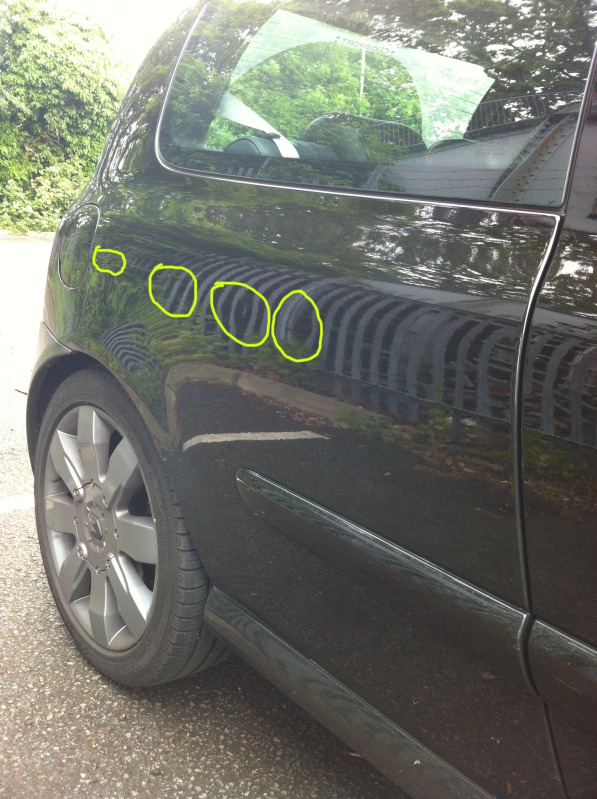 I have a few in the flamers rear wings

I know they are there and although my car is showing signs of wear and is not in tip top shape, seeing these really does annoy me.

Guysy: I'm going to give my dent removal guy a call to see of he can do it, so I'll let you know the outcome once I find out.
G

BG 182
The same one mate? im going to look though my PMs you sent soon and PM the brother of the dentman or just use the info you gave me and see what he quotes.

Hoping for a decent fair quote this time for all of the dents, not going to just pay because I want them gone like before (hopefully.. ill probably get impatient)
E

Get it done
H

#006
I had one in an identical position, it was removed very easily.

The dent guy removed the rear light cluster and gently worked it out with a very long 'T' bar style tool. Behind the light clusters there are several holes which you can use to access the rear quarter panel without taking out any internal furnishings.

Hope you get it back to how you want it

2009 1.4 Astra SXI
I've got dents all down the side of mine and in my roof f*cking kids round here kicking balls around the cars and riding bikes between where we park... Really pee's me off! Not sure weather there would be any point in getting a dent man out to me Multiple times iv'e come out to find FOOTBALL PRINTS on my rear window! Football prints!!!!!
H

#006
The chap who did the rear quarter on mine also took out one on the roof very easily. He used a resin and a slide hammer which was attached to a hook which he set in the resin. Then just a few light taps with a nylon pencil and it was gone. He also took out the usual dent from the bonnet where people push down on it (not me by the way!).

Cost me £50 to have those three removed, and I would say that it was worth it just to see the chap working his magic. Lights, mirrors and a very strange array of specialist tools. It made for a very interesting afternoon watching someone who loves their job show you how it's done.

There is a no ball games policy around where I live, still doesn't stop dog owners throwing balls over the top of all of the cars so their mutts can retrieve them, the kids around here just have other areas to play in.

Good luck with all of the dents!

ClioSport Club Member
Racing Blue 182
That is incredibly cheap for those. At that price you can't fault that!

I had some removed a few months ago and it's quite interesting to see how it's done.

Well I'm glad that people have had dents/creases in the rear quarter removed. Gives me piece of mind

172 cup
what companies you using?? i could do with my dings being pulled out

Scroll halfway down. The guy I was using was very good so he'll be getting another call very soon.

Does anyone know of any local to oxford area

PB Clio 172
it seems everyone has these

I have 5 up my side and I need them to be removed but I know as soon as I do some twonk will hit it in a car park ! grr! :evil:

ClioSport Club Member
Racing Blue 182
The admin guys are trying to sort dent removal guys for this years CSS. The chap they had last year was popular on the day and decently priced, so hopefully they'll have another one this year.

ClioSport Club Member
Racing Blue 182
Had my op's dents removed today. Very happy with the work. The dent removal was accessed through the rear light cluster. Will upload pics later on

Dr Jekyll said:
The admin guys are trying to sort dent removal guys for this years CSS. The chap they had last year was popular on the day and decently priced, so hopefully they'll have another one this year.
Click to expand...

I hope they do I will definitely be asking him about 3 or 4 on my car.
Looking forward to seeing your pics mate

ClioSport Club Member
Racing Blue 182
It was easier to link my thread page than to copy and post each pic but the dents is now removed!

Simon is really good and definitely well recommended, whether it be your clio or any other vehicle. There's no call out fees and not only will he give you a quote there and then, he won't charge unless the dent is removed