ClioSport Club Member
Too many.
No idea, apparently a full report will be up soon.

2.2 bar shed.
Corys car survived. Either way bad times. Was looking for this thread earlier to post this up, couldnt find it.

Was pretty gutted to say the least.

This should clear it up.

I'm sure everybody's wondering what's going on, so I'll start with some back-story.

I had Rusty torn pretty far down because I was planning on some summer renovations, the main one being a shaved bay. I was also working on a new air management setup so I had the suspension off of the car sitting off to the side. 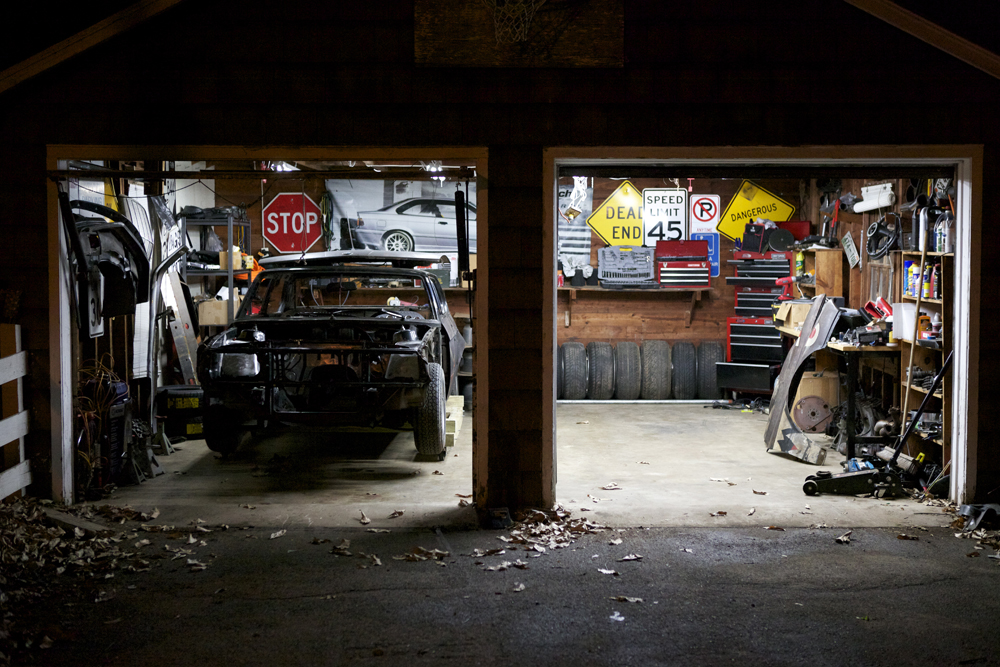 In the middle of all this, I decided to get Ratty's old engine running while it was sitting in the driveway, all out of sheer boredom. I made a new wiring harness for the engine and during the starting process managed to hydro-lock one of the cylinders full of gasoline. I pulled the spark plugs to plunge the gas out, and while turning the engine over, the battery lead hooked up to the harness sparked. The fuel ignited and sent a fireball towards the garage. By sheer chance, the flaming gas landed directly on another 5 gallon tank of gas. The garage more or less exploded. It went up so fast that there was literally no stopping it. 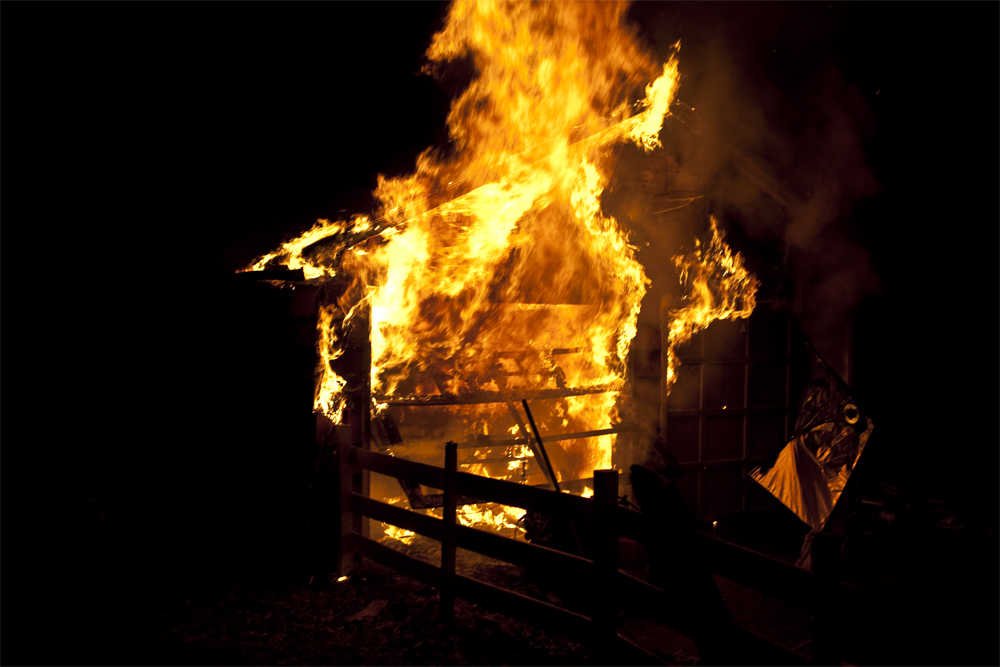 We're not allowed to enter the garage until the fire marshall clears it, so we aren't sure of the extent of the damage. All of the wheels that I own, except for the BBS Prototypes, were in the garage. The car itself looks pretty bad and probably isn't salvageable, but we won't know until we're able to pull it out of the garage. It's visibly damaged. 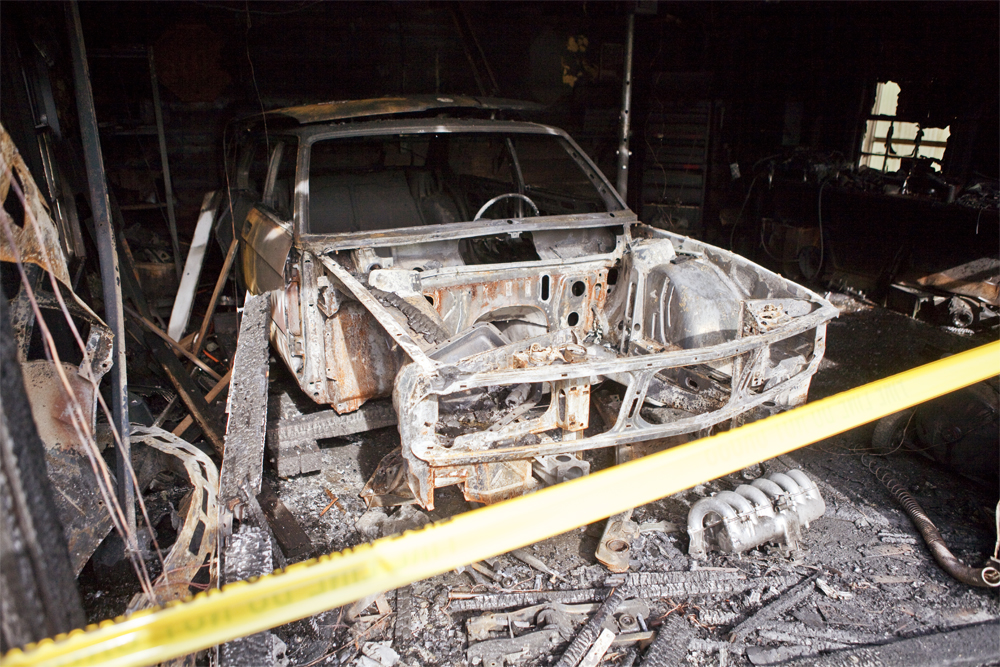 The bags on the suspension look to have burned up , and what little interior was in the car is toast. Judging by the size of the fire, heat damage has probably rendered the chassis of the car and the wheels structurally unsound. It doesn't really look like much in the garage itself survived, and the garage itself will have to be torn down. 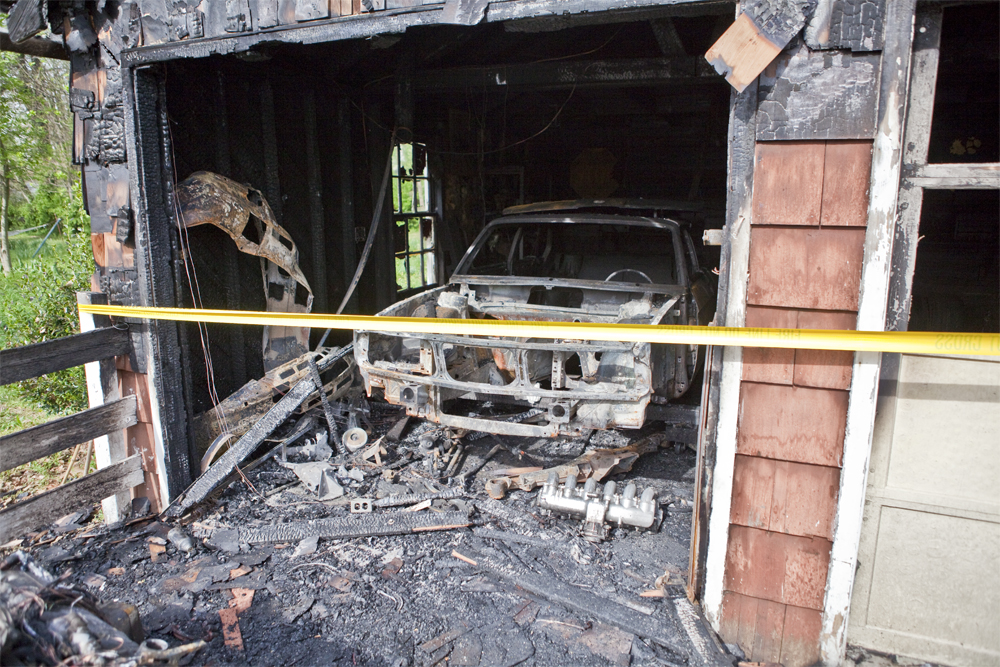 We got Cory's car out before the fire spread to his side of the garage.

I appreciate everyone's kind words so far, but I've already been asked by several people if this is some kind of elaborate scheme to bring the car back again. If you think I'd actually burn my garage down, losing most of everything I own and risking the lives of others in the process, that's pretty sad.
Click to expand...

By the sounds of it he's f**king lucky not to have been burned or killed.

Jap Shed
not a fan but love the commitment!

cliobritt said:
not a fan but love the commitment!
Click to expand...

Gutted for the lad. All sounds a little coincidental really, just so happened to that the fire shot at a tank of petrol? But i'm sure that's not the case, as he say's why would he burn his garage with his belonging's and risk his mate's lives etc...

Shame... Even if i didn't like the later look of the car that much.

Im a bit of a purist when it comes to E28'S and i think he has made a right balls up of this.

AMV8, Mk1 Golf
not a fan of the car but trely gutted to see it dead, i cant imagine how sad it must be

Mashed up Egg in a cup

Real real shame about the fire, I hope it ends well and he salvages it!

Were those Blistiens he chopped and re-welded?

Octavia VRS LE
only just now read the whole thread, and i was really happy after reading it fair play seeing a car like that go so far, and then THIS....... gutted for the bloke fairplay, all his wheels were in the garage to... i bet bhe lost thousands of pounds, but i bet he doesnt care about any of that as much as the car....

ClioSport Club Member
Leon Cupra 290
Gutted about this tbf.
It was a hero build.

Let's hope it makes a return.

Looks pretty much as it did before imo

ClioSport Club Member
Mini GP1, Clio 182
Gutted to see its now dead, one of my all time favorite cars this, loved reading about it.

Hondata'd EP3 Type R
I admire the whole workman ship, although its not to my taste, but dont the US have MOT's as such?Not debating the workman ship or quality, but things like the broken windscreen etc?

ClioSport Club Member
R53
It's coming back from the dead, seems like even fire can't kill the car :approve:

What does it take to kill a car?

It's pretty obvious fire is one way. Severe collisions, intense flood damage, and of course, rust... They're all capable of reducing anyone's pride and joy into nothing more than a worthless scrap of steel and alloy. If you ask anyone who has put blood, sweat, tears, and most importantly, heart, into a car, they'll tell you that there's little worse than losing it all. For many of us, cars are an extension of ourselves. I know I'm not alone when I say that my cars mean more to me than some people in my life. Cars are simply what I do.

But none of this applies to Rusty. Rusty isn't an extension of me, because Rusty is his own self. Rusty is more than a car, and if you doubt that for a second, I can say it's only because you've never had the chance to meet him. I'll be honest for a moment. Rusty is probably my best friend. Yeah, that might not be the "coolest" thing in the world to some, but I'll just hope that they simply don't "get it", and that's okay. Rusty and I have been through a lot. Probably more than most friendships could hope for in the good times or handle in the bad. Rusty has become the one thing I've always been able to count on, no matter what.

Rusty and I have been from East coast to West coast, and we've met a lot of people in between. I can say whole-heartedly that this car is 100% responsible for a majority of the friendships I have today. It's responsible for who I am, what I do, and who I want to be. Sure, to you, it may be "just a car", but frankly, it's not. 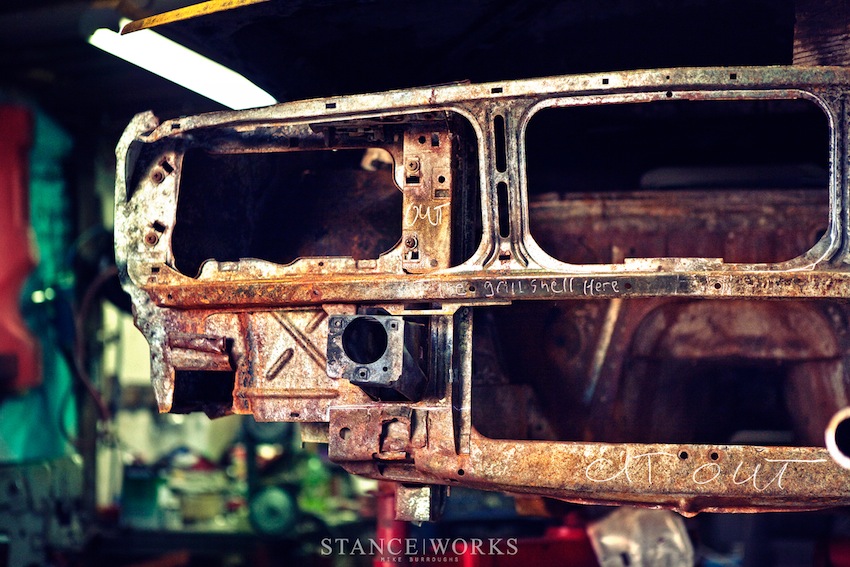 Watching my oxidized friend burn to the ground was something I never thought I'd actually see. All in all, it seemed like a fitting end, watching it happen. A viking funeral in a sense... It was better than getting wrecked in an accident, or stolen, or impounded, which always seemed likely... I just wasn't ready for it. Standing there helplessly spraying with a garden hose as your garage goes up in flames... It's pretty humbling. I stood there, spraying pointlessly until it was simply too hot to do so. You know those little red household fire extinguishers? They simply don't cut it.

At that point, I knew it was game over. This was Rusty's end. Four years of hard work and more importantly four years of friendship, done in an instant, and there wasn't a thing I could do about it. That sense of defeat Memphis Raines felt when "Eleanor" was crushed really hit home.

I'm left with nowhere to build a car and a wheel collection powdercoated by ash and soot, begging for an acid dip to return them to the shine that their yellowed-aluminum may never have again. Socket sets entombed by their plastic cases melted around them, my toolbox forever enclosed by melted bearings. Hardly anything made it out of the garage alive. Puddles of aluminum are left where oil pans and engine timing covers once sat. An M30 head was melted beyond use. The front of Rusty is warped to the point where you would swear Maaco just finished their top-tier job fixing him up.

But there's something fortunate to come from all of this. I shared this event with my community, my family... and I saw once again what kind of importance Rusty really carried. I saw a lot of people say some foolish things, but I saw so many people express compassion and distress for what happened. I realized that they too lost a friend in this fire. It really went to heart. It was reassuring to know that Rusty wasn't just my friend. Rusty was more than a car to more people than I had ever imagined. People seem to love him, almost as much as I do. The entire community came together and showed me something incredibly important.

It takes fire to kill a car.

Nay-sayers, "******", people who legitimately want to see Rusty come to an end... I've got some bad news. This certainly won't be your winning battle. 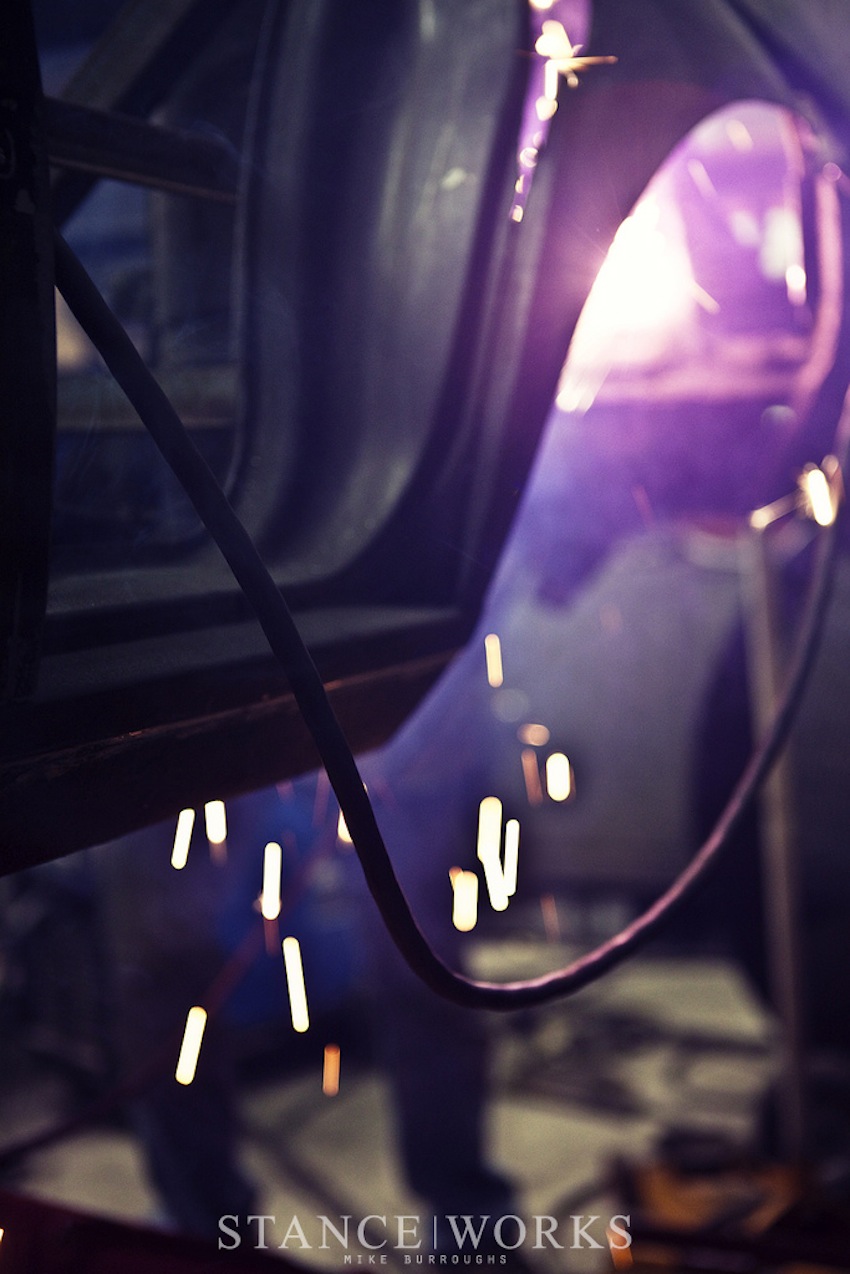 He'll be back.... and if you know Rusty like I do, you know there's a lot more than just steel that makes him.

It'll take more than Satan's hand to end his days.

So it's time to dust off the ashes and start cutting, we've got f**king work to do. 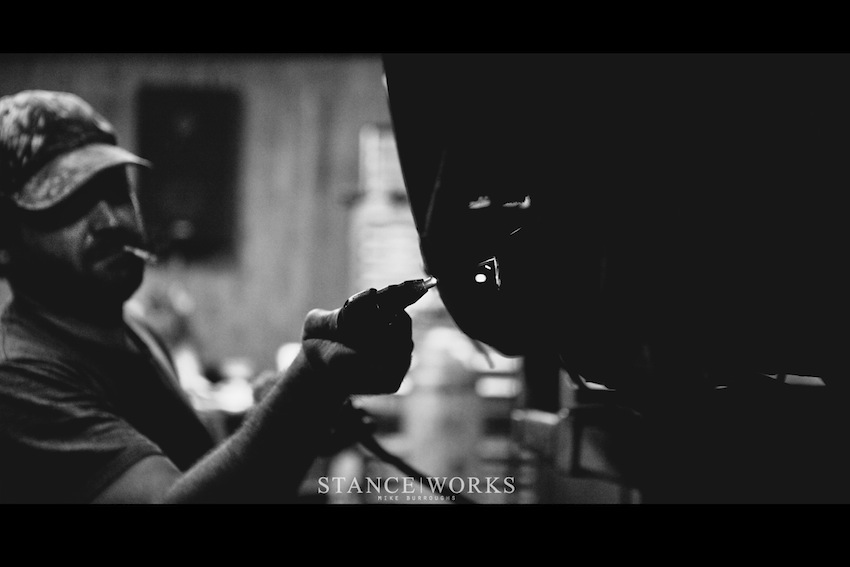 ClioSport Admin
Elise, Duster
LOL at the personification through out all of that.

Glad to see it's coming back though, and I can totally see where he's coming from. Nice read tbh.

Glad he's going to rebuild it. And I love that last picture.
D

That car has more personallity than some of my friends.

Meg'd r27
Awesome stuff, it's the passion a few of us on here have that fix the car time after time and it gets what it needs only 50 times greater (49 times than foxy though)

chumpmobile
holy s**t i got a tenter!
F

mini cooper R50
totally dedicated to the care, love it and cant wait to see Rusty back

I knew deep down that fire wouldn't be the end of such an epic car! Brilliant read from Mike as usual!

Disastra Coupe
Does seem a bit over the top. A bit 'sad' if you like.

I get the whole 'car having a personality'... My Saxo had a massive personality to me. I'm certain it loved winding me up at time's lol.

Although good luck to him for getting it back on the road. Can't be an easy task, i'm sure. Atleast this way he can pretty much do ANYTHING he want's. He's starting with a bare shell at the end of the day. He has to do everything.
T

My router would take a s**t when this happens lol I've not looked on many blogs etc over the last few days as it's painful on the phone.

Good to see it's coming back, hopefully it's prettier than the most recent look it had and some cracking shots in amongst those pics.

ClioSport Club Member
Too many.
LAD.

Clio3 ST 1.5dCi 78kW
What to say? Simply nothing. Epic Thread, I really did not like this kind of modifications in cars (I still prefer stock or a little modification that improve the car keeping the looks as stock) but this one is a thread to follow. Like a Phoenix that born from the ashes.
You must log in or register to reply here.

New vid: BMW iX first drive - y'know, the one with the GRILLES