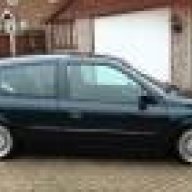 Clio mk2 1.4 ph3
Hi all, I recently fitted some fk highsports coilovers to my car and the fronts have adjustable camber. The tracking and camber on one of the fronts is currently badly in need of sorting out so can anyone recommend a decent garage preferably in south yorkshire that can do this?
Most places i've been to so far have pretty much fobbed me off saying its not standard so without exact standard manufacturer codes they cant do the work :S
1 or 2 places also said the car is too low to get on their ramp.
basically i just want the car setting to 0 camber for now so all the wheels are straight as I don't have any spacers on at the moment no camber is needed.
thank in advance
S

Go for standard settings if you want your tyres to last longer or if you're feeling sporty people tend to find -1.5 a decent road compromise.

Clio mk2 1.4 ph3
i mean just sat as standard ie I donr require any tuck under the arches, but as O said im not really sure what this setting is
?

Give them these settings for the front , -1.5 degress camber ,thats the top of the tyre in more than the bottom in a vertical plane looking from the front , and 2mm toe out each side or 4mm toe out total if they want it that way , which is the wheels pointing slightly out on each side if looking from above.

You also want to check the height is the same at the subframe wishbone mounts on the left and the right.
I hope i have made that fairly clear ?? But ask if you have any questions , any garage with laser 4 wheel alignment kit should easily set that for you

Clio mk2 1.4 ph3
yeah thanks thats clear and simple. at the moment im not running any spacers though so will these settings make it look like it badly needs spacers? 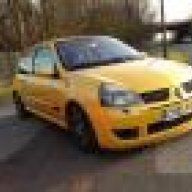 Thats my opinion i dont think its huge on a 16inch rim and will give a nice feel.

mattyd90 said:
yeah thanks thats clear and simple. at the moment im not running any spacers though so will these settings make it look like it badly needs spacers?
Click to expand...

You need some static camber to stop you under steering into a hedge.

Now I'm not saying you're going to immediately crash if you don't run any static camber, but there's a reason every single modern car has negative camber.


That is a very basic interpretation of it and if you were talking about a race car then it's well worth getting into the nitty gritty of exact camber angles required which depends on, frankly, a million things. But for a road car, just stick with a tiny bit of static negative camber.