Had a play with an mkII Astra GTE 2.0 16v earlier on the motorway. As it was fairly quiet speeds starting from 60 - !20. I was behind and had the edge most of the time although he did pull away slightly a couple of times in 5th, but I always caught up and had to back off.

Does this sound about right? Their fairly fast motors, would have liked to have had a standing start but he pulled off a couple of junctions before me. A nice thumbs up to each other made it all good fun....

BTW hardly anyone is ever up for a blast round my area so this is a rare event!
B

theyre very tourqy cars, so u need to get up the revs to play, ive beaten one although he did get me on the start till i hit that happy 4500 revs mark 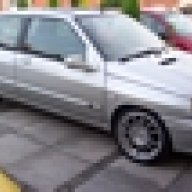 my mate had a mk 2 gte 8v but everyone reconed it had work done as it was quicker than a normal one, we had a quick blast down an empty duel carriageway, as you say they have a LOAD of torque but as my valver got up to revs i was backing off, and i easily out paced him round an island!
T

These have a very good (part cosworth) engine and are more rapid than you think! They are also light (as cars go) but i would expect him to be the quicker (unless its not been maintained and then it will be slower).

Yep my mate used to have one and i Reckon they are quicker than a standard Clio 16v.

dont try taking one around any corners tho.....
P

My mats just got a 2 litre 16V engine fitted in his corsa. Its meant to be runnin at 180 BHP. Its gonna be quicker than my clio runnin at about 150bhp aint it? But i guess its a corsa so it shouldnt handle that well. Mines really low and handles like a dream.
T

Adam you do have 160Bhp so should beat a standard Astra 16v.

the vaux XE motors are great!!

and the same from the 2ltr version is easy since most chaterham/westfields use them (apart from the std chaterham K series) and so there are masses of people with experience and parts for them......