I'm using this wiring diagram which matches the factory fitted stereo (I have a single large C connector, not the smaller yellow one that just covers the C1 pins): 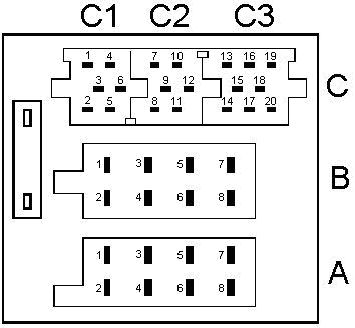 I'm not precious about the steering controls/display panel for now, so it should be a simple case of just connecting A and B to the included adapter, right? Except that A only has two wires in it - pins 8 and 4 (ground and 12v constant).

Haynes wiring diagram is telling me that there should be a yellow pin A7 for ignition switched power, as is pretty much every source I've found on wiring in an aftermarket stereo, including other threads I've seen on on here. The adapter that came with the stereo relies on this being the case, but helpfully includes bullet connectors on pins 4 and 7 so I can either swap them or connect both to pin 4 if necessary - I've done this and the new stereo works, except I've got to remember to turn it off or risk a dead battery, so not ideal.

I was fully convinced that the pin had been pulled out through previous manhandling, and had my weekend put aside for pulling the dashboard apart to go looking for it...but then I looked at the old stereo - and it only has two pins on the A connector! Which means the switched ignition must be somewhere on the C connector, right?

The only one I can see it being is C5 (listed as Radio ON) in the diagram. Is this the one I need to connect to pin A7? Or do I need to run a whole separate ignition switched cable from scratch?

I recently started working on my Clio Mk3 Phase 2 with the TomTom satnav to upgrade and mod the satnav to a HUD.
I figured out that on my car the satnav must be connected in order for the CAN signals to be sent to the wiring harness of the radio.

After plugging the satnav and the controls box that came with the satnav all the signals worked excluding the parking break, which is what I am trying to figure out now.

2012 clio 1.2 tce
@linoliveira
I'd like to do the same do you have any wiring documentation? What HUD are you using?
@TheDisapprovingBrit
The reason acc on isn't used is because the uch controls when the radio is on (in other words if you lock the car or leave the radio on it times it out so no flat battery. If you have a multimeter check whether C1 pin 5 goes to 12V when you switch on the ign,and then lock the car and let it go to sleep see if the 12v disappears tbh I'm not sure as never checked but if so consider it to be the acc switched power.
W

2012 clio 1.2 tce
I forgot to mention the switched wire is most likely yellow.

Renault Clio Mk3 Ph2
I will post my entire project with pictures and instructions once I find some spare time.
As for wiring documentation I am following Renault official Visu which can be found by searching in google: RENAULT VISU DIAGRAM MHH AUTO
For my car it is "Clio III X85_NT8483_Visu v5.0_2009.05.18"

Renault Clio Mk3 Ph2
I forgot to mention the HUD, sorry.
I am using Pioneer SPH-EVO64DAB with the CD-RGB150E display extension.

ClioSport Club Member
Clio 182
On some of them the ignition live is can so not something that you are easily able to use.

Find an ignition live circuit in the fuse box and pop one of these in and run the power up to the stereo. No more than a 5 minute job. 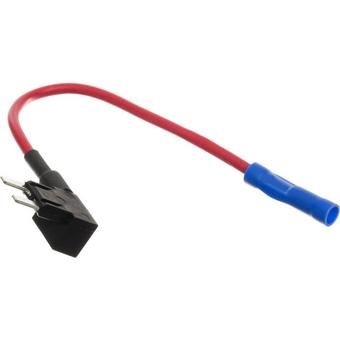 www.halfords.com
You must log in or register to reply here.

hi everyone I am new to this site .I have recently picked up a 07 Clio197. its MOT time I have cobra seats and airbag issues