Cup in Taunton, Valver A303 and major Evo crash

That was then followed up by two Evos (8 I think) on the A36 Warminster Services roundabout at 5:45pm, one looked as though it had run out of talent on the roundabout and put it straight into a ditch arse first, looked pretty wrecked but driver was ok, another Evo (and the police) parked up next to it.
D

172cup/BMW 320 coupe
ukaskew i have seen the cup (R10CUP) in heron drive, i go to college at SCAT and see it there quite regually, not sure if the owner is a member!

ClioSport Club Member
GREEN ITB 172
i was next to him at the roundabout...i looked over..would have dropped my window and passed a flyer but my passenger window wasen't working until today when i fitted a new motor.....lol

had a crappy number plate surround on it to.... 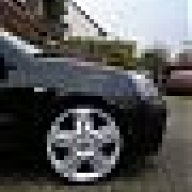 Yeah i have seen that R10 CUP about alot in taunton, coz i went to SCAT last year aswell, and worked in taunton!!
D