ClioSport Club Member
Several + Clio 182
Earlier this year I fitted a KTEC Jenvey throttle body kit to my Clio 182 which has an otherwise standard engine (which has done 130K) other than a Miltek exhaust with a sports cat.

I had the car mapped by Dan at RS Tuning after reading reports that he is well respected in Renault circles and one of the best, albeit expensive! The figures were however somewhat disappointing with the result being 190BHP at the flywheel.
I stated this to Dan and he said the numbers were in line with his expectation as standard Clios do not make 180bhp, so I'm realistically seeing about a 15 bhp increase which he told me is in line with expectations, the car goes well though unfortunately not had opportunity to really test in competition.

I've seen adverts for a recently for clio's being sold, one claiming 195 bhp with just 197 cams, exhaust, filter and a remap and another claiming 190bhp with an exhaust filter and remap both having been on rolling roads.

I understand many dynos can be a little optimistic?

Before the upgrade the car has been used for the last two seasons at Harewood and is one of two Clio's with a standard engine to go under 69 seconds ( 68.21) so it was clearly is not down on power before the fitting of the throttle bodies.

Interested to hear from anyone with a similar set up or from those in the know to reassure me that all is well.

ClioSport Club Member
Black Gold 182
Not having a blatant dig at RS Tuning here - but on a CS rolling road day years back, not one 182 got anywhere near their 'book' power. Mine I think recorded 164bhp and one ex-member on here who had spent a lot with different cams and head work, barely managed 190bhp.

Maybe their setup is biased towards the conservative numbers?

Darren S said:
Not having a blatant dig at RS Tuning here - but on a CS rolling road day years back, not one 182 got anywhere near their 'book' power. Mine I think recorded 164bhp and one ex-member on here who had spent a lot with different cams and head work, barely managed 190bhp.

Maybe their setup is biased towards the conservative numbers?
Click to expand...

Darren, you are making me feel a lot better already ...thanks the quick response!
T

Trophy #455
Whereabouts in the country are you? No harm taking it elsewhere for a second opinion - KTec on the south coast, Engine Dynamics in Essex, EFI Tuning on the Wirral to name a few.
B

Maybe yours could benefit from some cams to bring it up a bit .

Tim. said:
Whereabouts in the country are you? No harm taking it elsewhere for a second opinion - KTec on the south coast, Engine Dynamics in Essex, EFI Tuning on the Wirral to name a few.
Click to expand...

I'm north of Harrogate so RS Tuning in Leeds was quite close to me , EFI is the nearest one you suggested.

ClioSport Moderator
Audi C7 S6
Did you have a pre-throttle body run?

If it was making 170bhp at the wheels (highly unlikely) and then makes 180bhp post bodies, I can see why you’d be disappointed.

Cub. said:
Did you have a pre-throttle body run?

If it was making 170bhp at the wheels (highly unlikely) and then makes 180bhp post bodies, I can see why you’d be disappointed.
Click to expand...

Unfortunately not as I had fitted them myself. However I do have a RR result from 2015 provided by the previous owner and performed by EFI. showing 185.2 bhp, on a standard engine apart from filter and Miltek exhaust but no cat so you can see i've spent circa £3k for less than 5 bhp which can't be right. However I think Darren's postputs all this in a different light..... I'm trying to think positively!!
C

ClioSport Club Member
Clio 182
I'm new to these cars but from what I've read, I'd say those figures are correct.


I had my Integra DC5 mapped by Chris at EFI last year and it was down on power massively. I changed the exhaust for a more free flowing system and power increased from 216 to 237 brake, and that was on what was later to become a totally shagged K20A engine. Chris' rollers are known for being harsh so sounds like this other place are the same. A guy had just had his full blown track spec 182 mapped just before me and he was disappointed with the figures and he had ITB's etc as well, don't think it came in under 200 brake from what I recall. Chris also explained the RS much like the Honda engines are quite highly strung, so gains are going to be minimal anyway.

I think maybe you would benefit from cams, head work, a 3" system and possibly inlet work and then combined you will start to see better figures, probably circa 215 brake I'd have thought.

As long as the car drives better mate I wouldn't get bogged down with figures you know.

Tonyclio said:
Darren, you are making me feel a lot better already ...thanks the quick response!
Click to expand...

I've still got my print-out from the day - but I think it's in a folder at work and I'm working from home currently.

If I remember when I finally get back in - I'll scan it and send it to you for comparison!
C

ClioSport Club Member
Clio 197
I wouldn't worry about the figure, especially given you've got no direct comparison before the work. I was in a similar boat to you with my last car. Paid out a load of money on flashy parts only to end up with 15bhp more.
I ended up splitting the car it pissed me off that much

ClioSport Club Member
Civic
Mine was tuned at Engine Dynamics and think it made 175 before any mods, then it had 197 cams, ktec induction and PMS exhaust and made 190. If I had something like an rs2 inlet and bigger injectors it probably would of made around 200.

ClioSport Club Member
Boostvagn.
If it’s an otherwise stock engine, then I personally wouldn’t expect it to be breaking 200bhp. I would have said you need exhaust, cams AND itbs/an RS2 inlet to crack 200.
S

182 attempt #2
I really don't think it's valid to use a dyno run from 5 years ago on different rollers to conclude that you've only gained 5bhp.

By all means take it to a more optimistic dyno. No-one's saying it'll be more accurate but it might help contextualise the adverts you've seen if you convince yourself that the same car on different rollers on a different day can be 10bhp different. Likewise no harm investigating whether 197 cams and the so called "group N" timing suit ITBs, particularly if you're able to do the belts/timing yourself for free?

ClioSport Club Member
Titanium 182
If it ran 185 at EFI and only made 190 on bodies, I'd be a bit disappointed tbh.

Would usually be looking at a 10-15bhp gain and usually more with cams.

ClioSport Club Member
Titanium 182
Should have said.... That's if it would have ran 185 at RSTuning.

Has it had a cambelt since the previous owner?

ClioSport Club Member
Porsche GT4
I've had three ITB engine builds, the first being the K-TEC Jenvey DTH setup. The gains weren't great but that's the reality of NA tuning on these F4R engines. A genuine 190bhp is a pretty good figure in my experience. Don't be put-off by the figures you read across the forum. I daresay a lot of the 200bhp figures would be lower had they run on the same day and same conditions when you had yours done.

I think I made something approaching 220bhp when it was up at RS Tuning, but that was with a different ITB setup and with lairy cams, fully forged, high compression, etc. That's a decent route to go if you are happy to pump 10k into it and prepared to stay on top of the maintenance. Forged pistons and internals aren't the best if you're running the car as a daily for example.

ClioSport Club Member
NORTHERN MONKEY
Different rollers give different results your set up would show 200 at EFI,
RS Tunings rollers are perhaps a little stingey but a piece of paper saying 200+hp will maybe make you feel better but isn't going to make the car quicker.

Clio 182
Just proves that all the 200 Bhp Clios are mostly bullshit unless very highly modded.

Clio 197
Worth statiing the obvious here, that 'flywheel' BHP and BHP 'at the wheels' are very different figures the 'drop' can be around 35%, therefore need to make sure that the comparisons are the same. Also, conditions on day of test make a difference e.g. high humidiy can favour power. If you want to get your Clio to go faster (on a track) invest your money in learning how to drive it quicker... its much better value bang for buck!

ClioSport Club Member
Boostvagn.
35% transmission loss is ludicrous unless it's something like an old Yank tank with a sloppy auto. A Clio is going to be more like 10-15%.
W

McGherkin said:
35% transmission loss is ludicrous unless it's something like an old Yank tank with a sloppy auto. A Clio is going to be more like 10-15%.
Click to expand...

35% would be high end admittedly but 15% is also probably a bit optimistic - the point was really to illustrate that people need to state whch measure they are using. 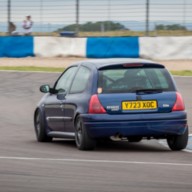 ClioSport Club Member
Hi comp phase 1
@Tonyclio that’s about right for just bolting on a set of throttle bodies.
As a comparison I’m running the ktec bodies and high compression pistons and standard cams. Made 210bhp at ktec rollers went to Surrey rolling road and it made 201.5bhp.
That was 6 years ago so at cambelt change ktec put some Schrick cams in and made another 16bhp.
I’m yet to see what it makes at SRR....it would be good to have a Cliosport meet there after this lock down is over.
W

Clio 197
Great idea for a Rolling Road meet - SRR have a great reputation.

ClioSport Club Member
182 RaceVan
My twingo ran 125hp at the fly at rs tuning when it was mapped then 145bhp up here at a RR that was reading very accurate for stock cars!
You must log in or register to reply here.
Share:
Facebook Twitter Reddit Pinterest Tumblr WhatsApp Email Link