audi a6 3.0tdi
This has been brought up before and i it won't fit i think its something to do with the gearbox

ClioSport Club Member
Golf R
Nope, the chassis will not allow it without extensive re-building (IIRC)

Buy a Megane instead and re-map it
T

172 & LCR
Put a low blow turbo kit on your motor it'll be easier runs on standard internals just bolt on.
A


how much are we talking for that? do ktec do it?

As above really. £3k for K-tec turbo, or £4k for RSTuning supercharger.

Fitting the Meggy engine in a car it just 'drops' into would cost about as much as the k-tec turbo conversion, so in a 182 it'd be a fortune.
A

Ph1
IIRC it fits but the chassis leg needs slightly modding gearbox side?

Quite suprised no ones had a go. Renault modders seem quite tame when it comes to engine conversions. Over on the Ford forum they'll lump owt into a mk3 Escort lol

One of them did, got it in but never got it running.
A

ValverInBits
it's the 6 speed box that won't attach. It's a shame. If I were tackling it, I'd spend time trying to get the 182 5 speed mated to the F4Rt megane engine.

PH1 172 Sport
I think Freds had one sat in the bay before to see if it fits. I'm sure someone on here was looking into getting one fitted. Anything is possible if enough cash is thrown at it.
A

Yes, just use the 5 speed box, no problems.

Id give it a try but the price of meggy engines isnt too inviting.
A 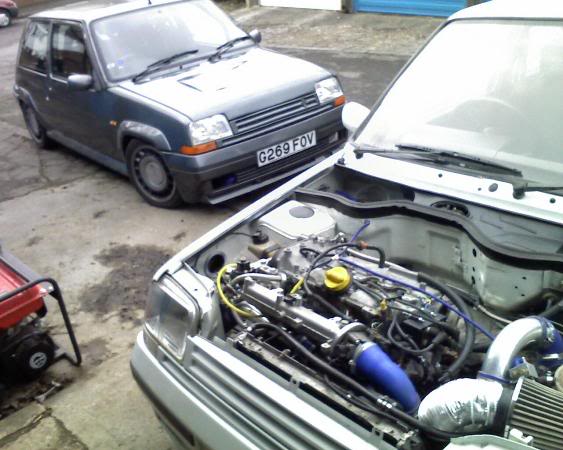 5 speed box doesnt bolt staight to the Meg bottom end. Dont know if it can be made to fit though?
A

5 speed box doesnt bolt staight to the Meg bottom end. Dont know if it can be made to fit though?
Click to expand...

Grey ones mine, white ones a mates.

So hows the box mated to the BE? some kind of Adaptor plate??
A

theduck said:
So hows the box mated to the BE? some kind of Adaptor plate??
Click to expand...

Just made an alignment adaptor to mount the box concentrically onto the crank then Matt drilled and tapped the block and bolted it on. Job done

MarcoB said:
Id give it a try but the price of meggy engines isnt too inviting.
Click to expand...

Last one I saw for sale was £750. They seem to average around a grand though dependent on history.

I would love to see a clio with a meg engine in. Are the engines pretty similar in size and weight?

ClioSport Club Member
172 Cup
Going to bring this thread back up again. I was wondering if anyone could shed some more light on the feasibility of fitting a meg engine to a clio? From reading this thread it needs some work doing on the chassis leg. I would wanna retain the megs box really.

Also what sort of power to tuned megs make?
How serious is the modification needed to make the power?
How feasible would it to keep the whole front end of the meg, obviously with a few mods, If I got the front end from an r26 or something, would come with lsd and the trick steering geometry thing that reduces the torque steer? (pretty sure you get it on r26's)

Any info would be great as I am considering something like this as a future project. Possibly over the winter months!

Anything can be done with enough money, your idea would need lots of it. IMO better off spending it on something else. Supercharge + coilovers for example

theduck said:
Anything can be done with enough money, your idea would need lots of it. IMO better off spending it on something else. Supercharge + coilovers for example
Click to expand...

Yeah, it would be the easier/better option I'm sure. But if everyone did the easy option then it could be very dull, I would prob buy a cheap clio to do the work on and keep my current one to use. Then at least if things stop or money is low I am not left without the cup (would miss it to much )

I would hope to do a lot of the work myself (although would need help with the electrical stuff) I am reasonably good at welding and have friends who can get things machined etc.. if necessary.

Was looking at tuning options and 300hp sounds pretty easily achieveable from a meg engine. not sure how good thse guys are tho!

Can you imagine a 300hp clio, would keep it looking pretty standard as well, sleeper :sleepy: !!!

300bhp clio would be immense, I just dont think the full meggy front end sounds like a sensible way to go. Sure use the engine, but not the suspension, and probably not the gearbox either.

ClioSport Club Member
172 Cup
Yeah, tbh I have never really looked at a meg up close (yet i am considering using one for an engine swap !!!!!!!), only ever sat in a few.

The gearbox does seem to be a problem and unfortunately it would be hard to tell how difficult it would be until I drop it in the bay!!! Plus I think it would be important as 300 horses plus whatever torque it produes will rip a standard clio box to shreds :dead:

The running gear was a bit of a whim, just to see what people thought. Would like to keep the lsd if possible.

Scoff runs a VAG gearbox on his 500+bhp 172 engined Renault5, so that could be worth a look. Also worth speaking to Fred as he was doing this at one point.

theduck said:
Scoff runs a VAG gearbox on his 500+bhp 172 engined Renault5, so that could be worth a look. Also worth speaking to Fred as he was doing this at one point.
Click to expand...

The VAG boxes have a rep for being pretty strong so that is a good shout. When the summer is drawing to a close and I am getting a bit more serious about starting a project (whatever it ends up being) I will have a chat with Fred. The cup will be due its service sometime soon, so I will go see Fred and have a chat. Or if its going to be to much I might buy a caterham kit and build that instead!!!!
D

_WILL_ said:
Can you imagine a 300hp clio, would keep it looking pretty standard as well, sleeper :sleepy: !!!
Click to expand...

Yes, I can. I have one (although not quite 300bhp yet).
Contrary to popular opinion, it doesn't destroy gearboxes either. I don't know where people get that ridiculous idea from TBH.
A

Ph1
IMO folk have totally over estimated just how difficult sticking one of these engines into a Clio would be. IIRC the box only grazes the chassis leg?


Id guess the main issue with the Meggy / Clio conversion would be weight, plus being worth it with big power conversion being available off the shelf.
H

alien green rs133
but can you imagine the awesome 6th gear motorway cruising.

anyone got a 2.0t engine package lying around??

Hutchie said:
but can you imagine the awesome 6th gear motorway cruising.

anyone got a 2.0t engine package lying around??
Click to expand...

6th gear would be great. I plan on doing an engine conversion at least once in my life, so why not this. It will be a steep learning curve, but I don't mind a challenge. Its different as well.

It will be a while before I am in a position to start anything like this, October/December time probably, so there is plenty of time to research and plan.

With regards to the clio gearbox I am only going by what people have said on here. Do you think they will cope with the sort of power a tuned meg engine will put out? Plus I want the 6th gear!

Weight wise, I didn't think they would be too much heavier than a clio engine with a turbo/sc conversion.

The bit I am confused about as I don't know that much about them is, would you wanna keep the meg's ECU or would it be better to get an after market one of some sort? As I have said before I am not that great with the electronic side of things, but am willing to learn.
S

Andyman said:
IMO folk have totally over estimated just how difficult sticking one of these engines into a Clio would be. IIRC the box only grazes the chassis leg?


Id guess the main issue with the Meggy / Clio conversion would be weight, plus being worth it with big power conversion being available off the shelf.
Click to expand...

Not many people will let anyone cut and re-section their chassis leg to clear the box though......christ, people still have a s**t-fit if you remove the slam panel or fit the wrong badge even
H

ITB'd MK1
pah, I flared my mates arches with a massive hammer in a carpark on the way to germany because it had started to rub on big motorway bumps with all the extra stuff in the car
You must log in or register to reply here.