ClioSport Club Member
Sunflower Ph1 172
I know this must get asked a lot (I've done a fair amount of research!), but just a query on driveshafts.

I am looking for a new right hand/drivers side/offside 182 "Cup" spec driveshaft.

Both KTR and RPD list the 8201187820 (essentially exchange unit), but both say Renault have no stock, and can't give a date on when there will be any stock.

About 3 or 4 weeks ago, I went onto ECP website and saw a GKN item available, which I bought, thinking the specs were correct with what I expected a 182 Cup driveshaft to be.

Today, I looked at the specs on their website again, and see that they list this as a replacement for OE part number 8200352042 which is a Non-Cup driveshaft (clearly missed this when I purchased).

So my question; do I need to return this driveshaft because it will not be compatible?

I've not even attempted to fit the GKN item yet so no idea if it even matches up or whatever. But if I know for definite it won't, would rather just return it for a refund whilst it is new and boxed.

From what I have read, the main difference between the "Cup" & "Non-Cup" O/S driveshaft is the ABS rings, with Cup ones being thicker? This new driveshaft appears to have thinner rings?

If this is the case, would I get away with just replacing the ABS ring for something like this ?? Or is this not possible?

I'd like to go genuine if possible, but seems difficult to get hold of one.

GKN seemed like the next best option in terms of quality. Am aware there are alternatives from J&R and Shaftec but not sure how good these are? The fact you can get a new J&R shaft for circa £50 would not give me much confidence in it lasting!

Pictures of the new driveshaft for reference, below.

Thanks for any help. 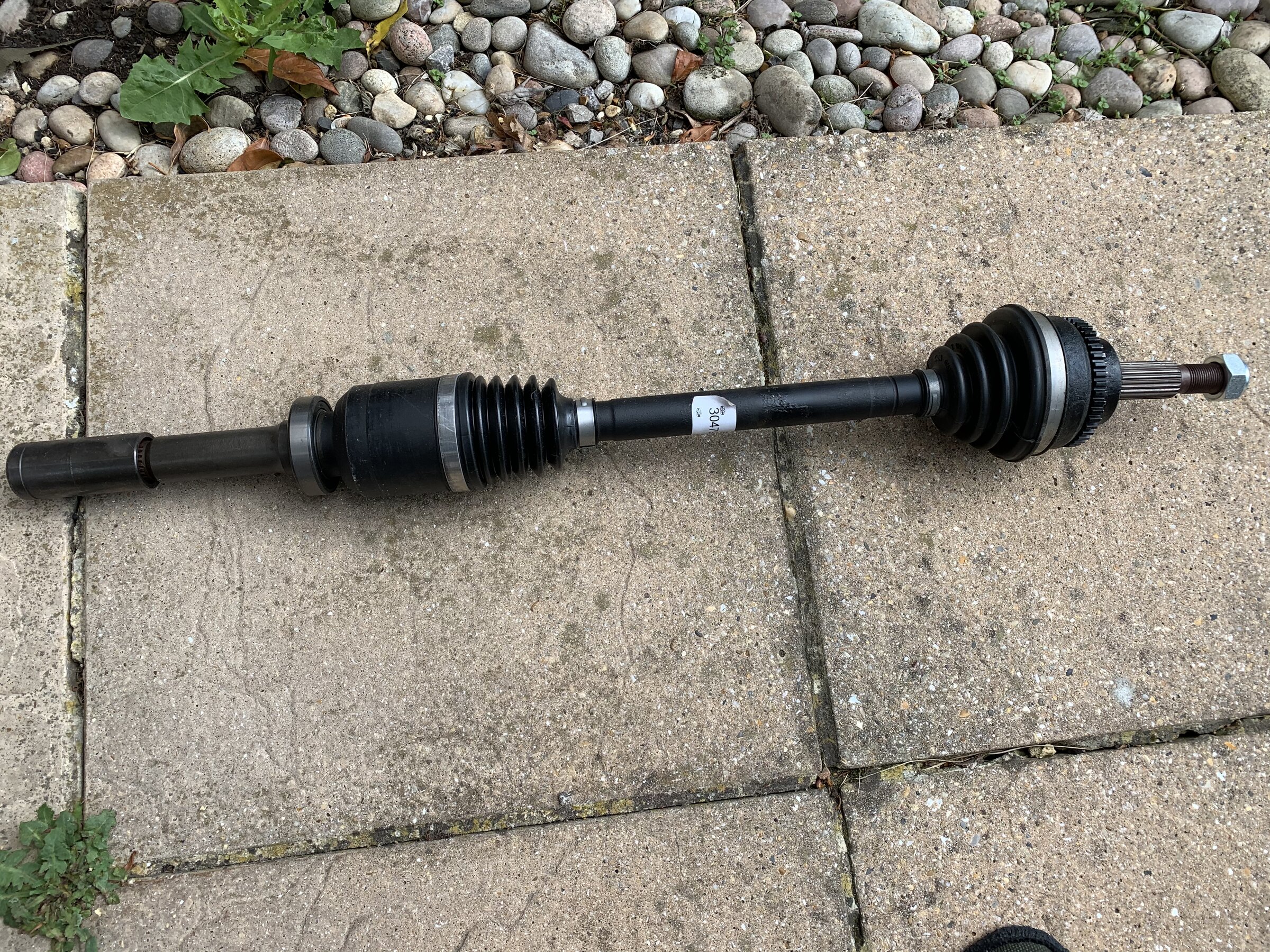 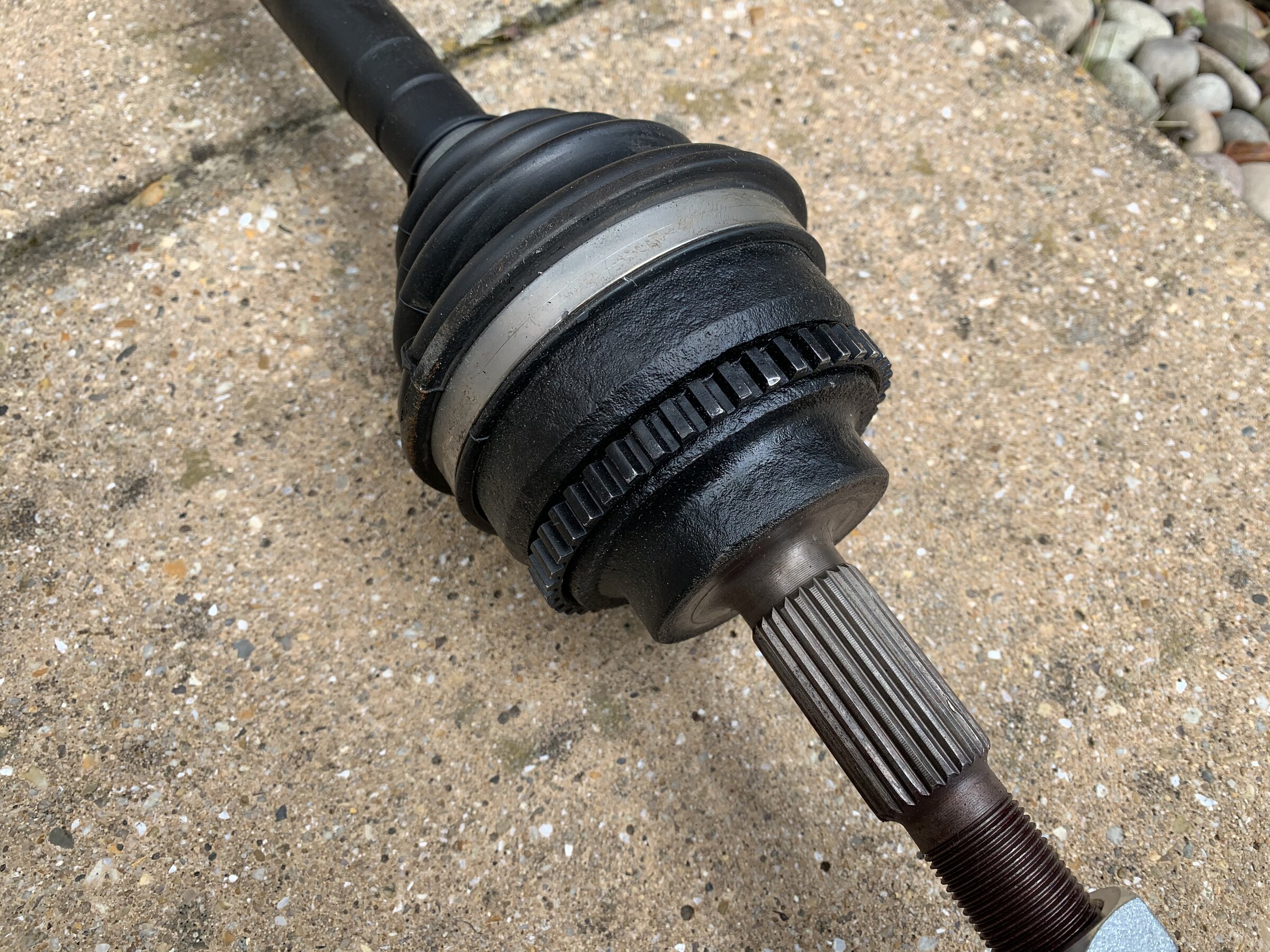 ClioSport Club Member
Inferno 182 Cup
I replaced the same side on mine last year with one from KTEC and I’m pretty sure the only difference will be the abs ring mate.

I was like you and done a lot of reading up. The 172 cup and phase 1 shafts are physically different, but the only difference in the rest are the rings.

ClioSport Club Member
Cayman R & Clio 182
So can the rings be removed and the correct one pressed on or are they PIA?
P

ClioSport Club Member
Mazda Rx8
Buy from J&R driveshafts and just mention which version you need in the rider comments as I did. I've had both sides from them and they're fine. They even supplied the cup Abs ring in the box too as well as the fitted non cup one.

Sent from my PCT-L29 using Tapatalk

Patrick Daines said:
Buy from J&R driveshafts and just mention which version you need in the rider comments as I did. I've had both sides from them and they're fine. They even supplied the cup Abs ring in the box too as well as the fitted non cup one.

Sent from my PCT-L29 using Tapatalk
Click to expand...

So if they provide both ABS rings, that confirms you can remove one and press the other one on?

If that’s the case I might stick with this GKN one.

I dare say people have bought J&R and not had problems with them, but £50-60 just seems far too cheap to me.

ClioSport Club Member
Sunflower Ph1 172
So, I think I have managed to answer my own question, by lots of reading of other (similar) posts, and some of my own cross referencing.

Am posting up my findings as it may come in useful for others as a reference.

The driveshaft in question is the right hand side/OS driveshaft I bought from ECP, brand GKN - screenshot of it from ECP website below.

I have circled the part where it shows as being a replacement for OE Number 8200352042 i.e. a "Non-Cup" driveshaft. I have also highlighted some of the other stats (length; no. of ABS ring teeth etc) which we will get to in a sec.

My issue/query arose because I have a 182 Trophy (uses "Cup" spec driveshafts), as explained previously. 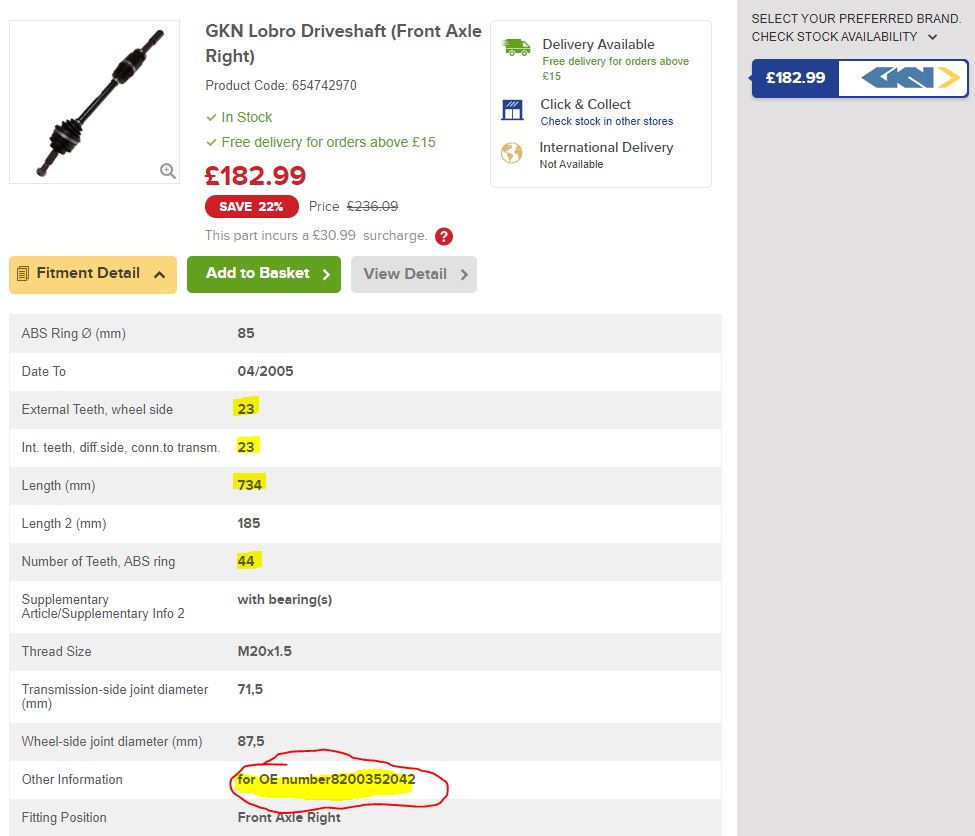 I then set about searching and cross referencing various other driveshaft part numbers.

I came across some driveshafts made by a company called GSP.

I have highlighted the stats on each one which show identical numbers. I have also circled the ABS ring on each, one of them is evidently thinner (for 172 & non-Cup 182) and one is the thicker (for 182 cup/cup pack/trophy). 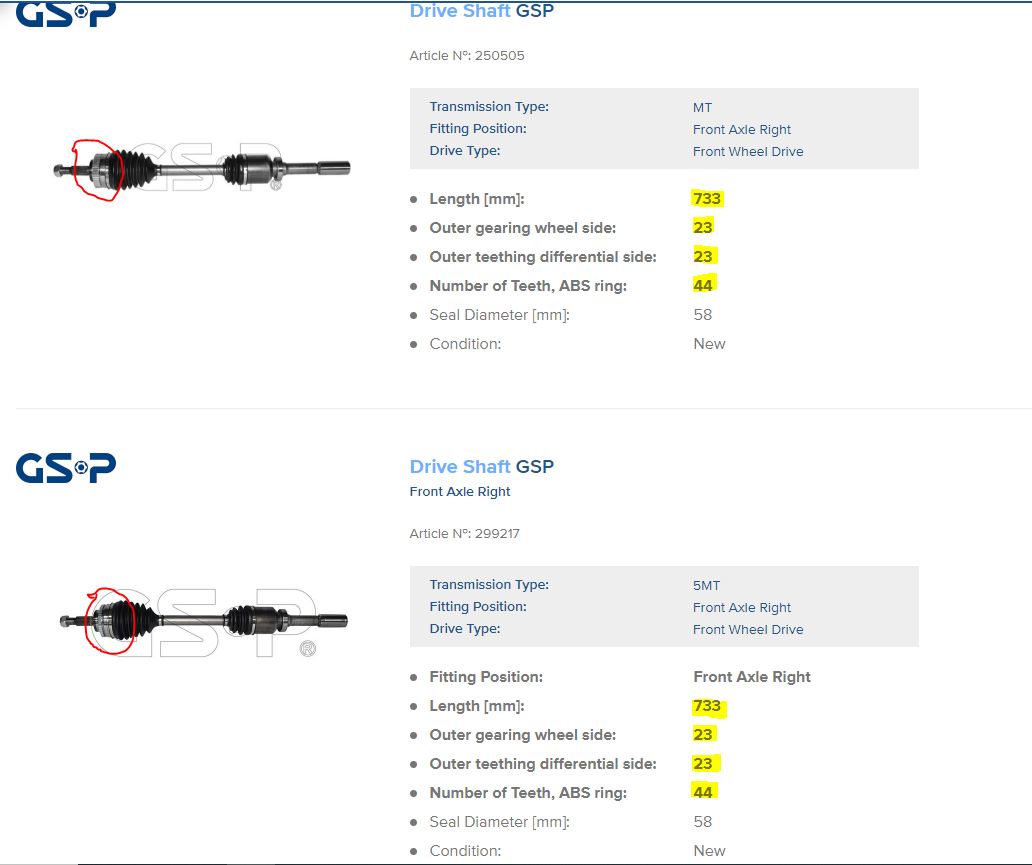 The above would seem to suggest/confirm that the right hand driveshaft for all Ph2 172/182 (excluding 172 Cup as no ABS) are essentially the same, with the ABS rings being the only difference.

This would agree with what has been said in various other posts I have come across, and would explain why J&R shafts are often shipped with two ABS rings (thick and thinner one).

One final test then, is a shaft made by SNR which I came across - picture of this below.

The picture clearly shows it with a thicker 15mm (i.e. "Cup") ABS ring, which I have circled.

When you then look at the specs (length, no. of ABS ring teeth etc) which I have also highlighted, everything agrees with the specs of the GKN & GSP options above, aside from the length. I believe this is a typo and is supposed to read 733mm or 736mm. Obviously I can't confirm that for sure, but think I can be reasonably confident this is the case. It certainly looks very similar to all the others. 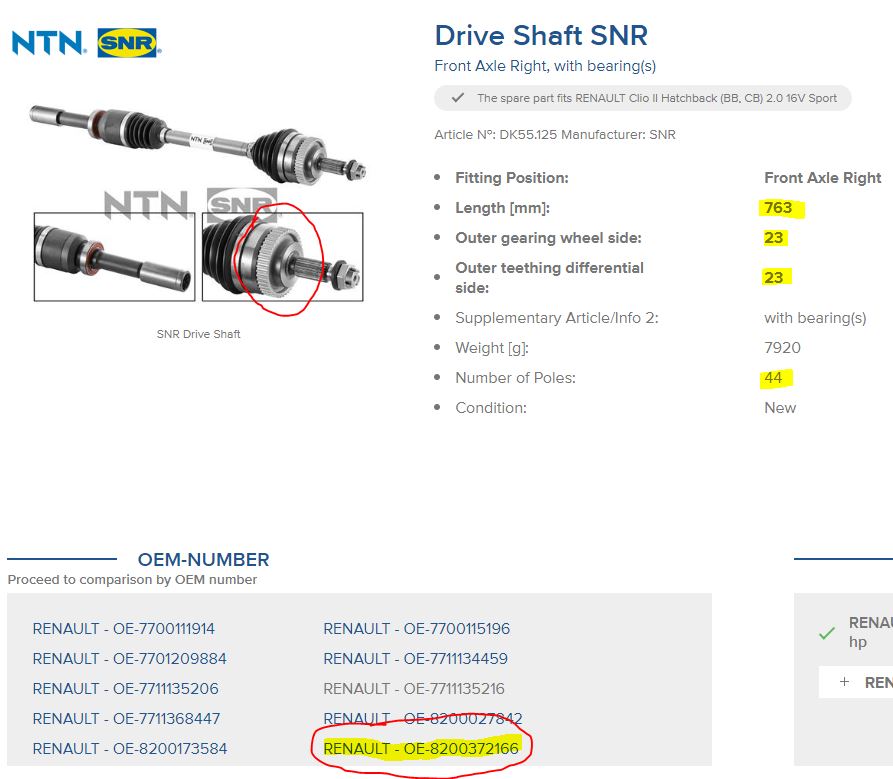 So, what is the point in all the above and what does it show?

Essentially, it confirms that the driveshaft is the same for all Ph2 172/182's (except for the 172 Cup - no ABS) with the only difference being that the 182 Cup, Cup Packed and Trophy models have thicker 15mm ABS rings; the rest thinner 7.5mm ABS rings.

What this means for me, is that I do not have to return the GKN driveshaft I bought from ECP, which I thought I might have to as it is listed as a replacement for the Renault part number for a "Non-Cup" driveshaft, and has the thinner ABS ring fitted.

Instead, I can simply order one of the rings in the link below, swap it onto the GKN shaft, and hey presto I should be good to go (in theory at least!).

This theory will be confirmed when it comes to fitting it; and I will be happy to report back once this is done.

Some of you might be wondering why I have gone to these lengths and not just ordered a genuine driveshaft - this would have been my first choice, but Renault are currently showing no stock and no date of when they will have stock (according to both K-Tec & Renault Parts Direct) which makes me think it might soon be listed as NLA. The GKN seems to be well built and of good quality, so pretty much the next best thing. I know a lot of people run J&R shafts with no issues, but I just can't get past the price (about £50-60) which just makes me think "cheap and nasty!".

Anyway, hopefully this might come in useful for others.

ClioSport Club Member
Clio 182
I ran the thinner abs rings on my cup packed 182 with no issues so its not a huge deal if your stuck with the none cups.

ClioSport Club Member
911 C4S, 182
Whilst it is true that if you swap the 7.5mm ABS ring for the 15mm item, the GKN shaft will fit, it may invalidate the warranty if you experience any problems in the future.

I would go back to ECP and ask them to exchange it for a Shaftec R396R.

In terms of quality, a friend has a RH Shaftec that is still going strong after 42k miles.

On a technical note, does anybody actually know why the Cup packed 182`s have the 15mm ring? @ NorthloopCup maybe?

The ABS sensor 7700411747 is common to both 182 variants, so my guess would be that the sensor is positioned slightly differently on the Cup bearing carriers.

If not, then the width of the ABS ring is an irrelevance?
You must log in or register to reply here.