I saw it earlier when I was on my way to my parents to clean the dust off of mine.

Rude not park up for a pic!

I would have come into the pub as I know it's on here, but I've never met the owner. So I just took a couple of pictures. 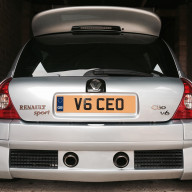 Wish I'd got to have a look at yours Craig, it looks stunning mate. You managed to make mine look half decent too.

@Scrooge, it had always been a s**t hole and was my local most of my life but a friend of mine owns it now and it's been done up really nice, In fact the dinning area was completed only a few days ago and it's a lot more family orientated now, like with any pub you get the arseholes but it's night and day from what it used to be like.

ClioSport Moderator
E55 AMG
I may have to pop my head in now, haven't been there since I was 18 so a fair amount of years!

V6, 520d M, X5
It is totally different mate, you used be guaranteed a fight every night of the week up until a few years ago but that's long gone and he's trying to get rid of the bad stigma it has.

Although there were a few a few punches thrown on Friday eve lol.

Oddly enough I've never been in there. I remember years ago when it was called Big Hand Mo's 'the good emporium' lol!!

Your car looks great mate, I was really shocked to see it there! I was like.. V6!!! Yeah sod it, I'll park up for a pic :approve:

Ive still never seen another Vee while in mine yet you've managed park next to me and take some photos. 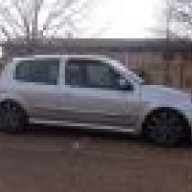 RSsprint said:
I've showed a few people your photo and they have all said "why didn't you get a blue one" b*****ds lol.

Ive still never seen another Vee while in mine yet you've managed park next to me and take some photos.
Click to expand...

I was expecting someone to come out of the pub etc, I was there for a few minutes.

It was sheer luck that I got it really, I always wanted a silver one, saw the press pics & though yeah, I want one!!
Then seven years ago a dude in Kent had my one for sale, I was on the phone within the hour of his ad going up as I knew how rare it was - he was like, best get here quick, I've had a dude from Bristol offering me full asking & wants to do a bank wire.

I was thinking, yeah yeah!
It turns out that it was Pete (Mace off of here! who was offering him the money) as I was there first & it was beyond mint I couldn't say no, 27k miles with only one previous owner before the dude, when he went to buy it from Renault he said that a dude was waiting to get in it & the sales man said to him, if you want it tell me now. I'm so glad he he did!!

Put it this way, he almost cried when he handed me the keys (I felt bad) but only until I drove out of his road

V6, 520d M, X5
Sounds like you were very lucky to actually get it, I bet Mace was pleased

You can tell its a low mileage and well looked after motor, it's stunning Craig. 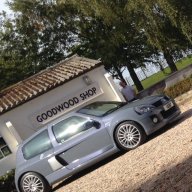 ClioSport Club Member
V6 255, 172's, JCW,
Nice one Craig! Great to see some pics on a spotted thread! Lovely looking v's, both of them. :approve::approve:

^ Thanks mate One day I hope to meet up with you, I'd love to get along to a Vee meet :approve:

RSsprint said:
Sounds like you were very lucky to actually get it, I bet Mace was pleased

You can tell its a low mileage and well looked after motor, it's stunning Craig.
Click to expand...