Bought this back in October 2013 from Danny-Ace on the forums, he'd ebayed it randomly as a none runner (aux system removed for s/c mock up and all wiring sold) so I snapped it up for a few quid.

Its since sat on stock in a mates lockup since then over Christmas etc with me having little or no time to look at it, until now. Track season is approaching, I've already booked Bedford in May and as of now I have no car to take! so best get going!

No idea how well I'll keep this up to date, knowing me, badly! but I will give it a shot.

So here she is as I bought her back in October, JWC, one of the old valvers I remember from when I got my first one, so sort of a car I always wanted to own after it inspired me to get/modify a mk1 16v Clio. 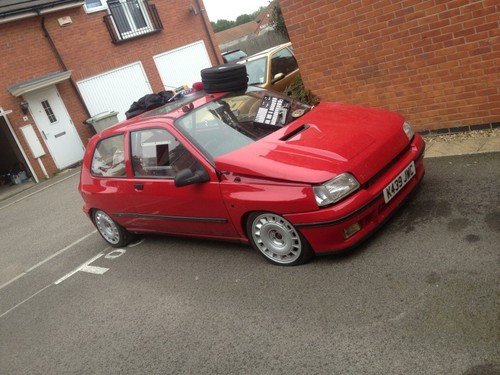 and sat tucked up 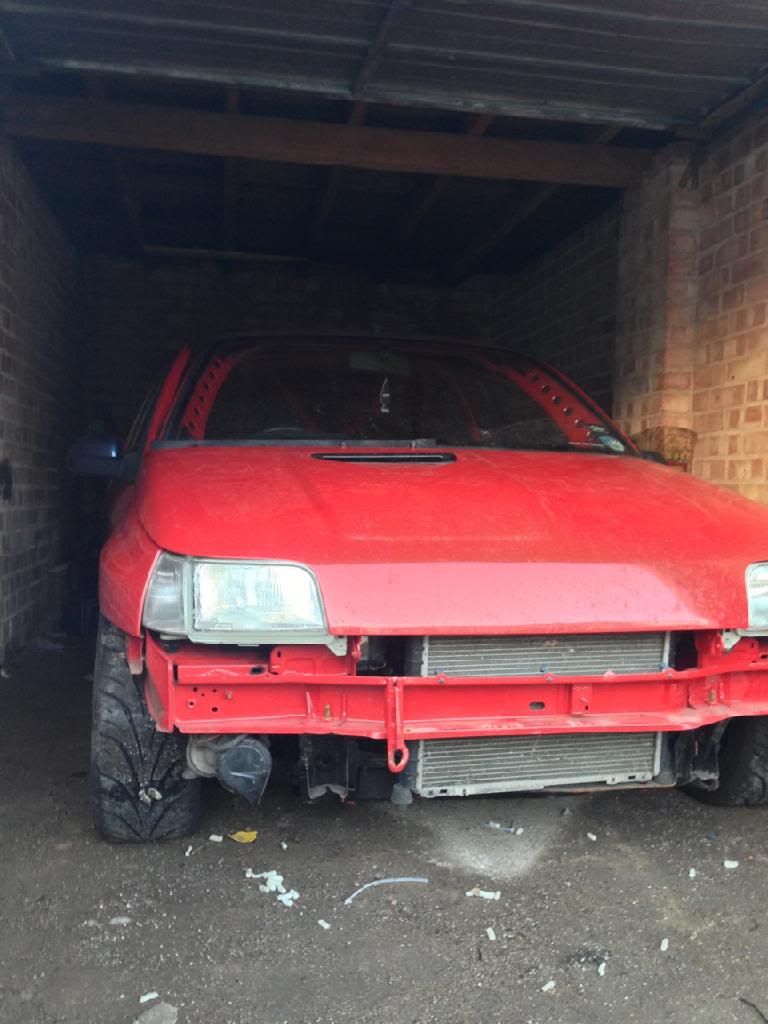 Danny had used the car on track a bit and he's spent a lot of time and effort on the car, its spec is pretty decent and although it was looking a bit sorry for itself when I collected it, I could see the potential easily.

That's all I can think of off the top of my head.

Pics of Engine and cage when I bought it 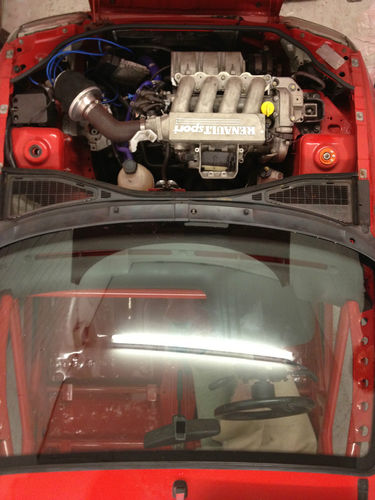 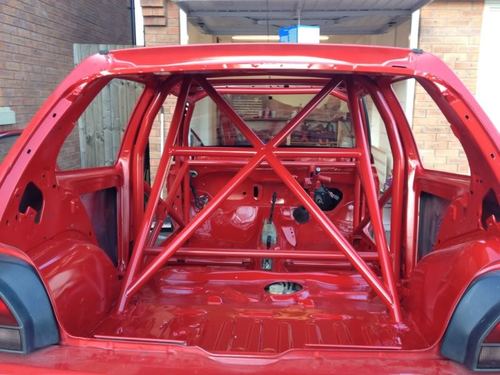 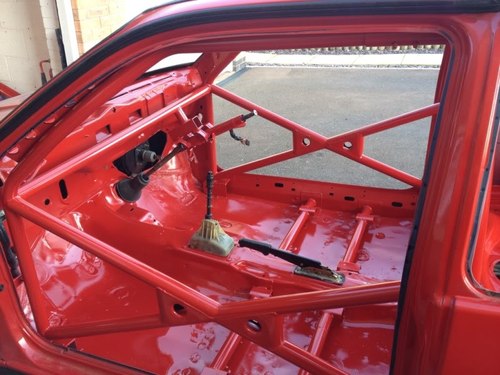 So a good base to start with. But theres some weird things that need addressing, like the front is so low that the front arch on the nearside was smashed apart and despite all the trick mods and track prep, its got Halfrauds front brake pads. And the radiator is zip tied to the slam panel, so tinkering needs to be done.

Also it has a clio 1.8 16v alternator, no use as I'm going to wire it up fully with job lot from a phase 1 172 I have in breaking currently.

So I picked it up this weekend and dragged it back home, first job before was to pop to my mates garage and check the timing as the aux belt pullet and crank bolt had been removed (s/c project legacy from Danny). Popped the locking pin in, whipped the oil caps off and bang, slotted the timing tool straight in. turned it few times, locked again and boom, in again. Bonus! so timing was still all fine

Car is now back on my drive and the list of parts and things to do is as follows:

so that's where we're at currently, hopefully some updates over coming weeks, slow progress more than likely until the nights get lighter and I can get on it after work!

quick comparison of the changes the cars undergone, as heres an old pic from when I originally used to covet the car 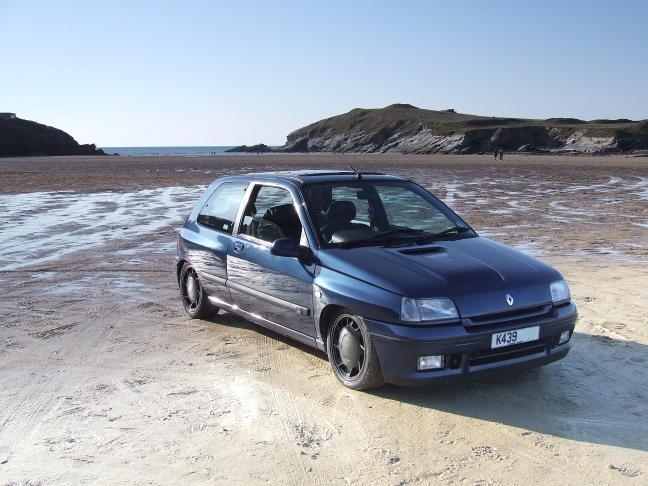 and as she currently stands in the cold light of day: 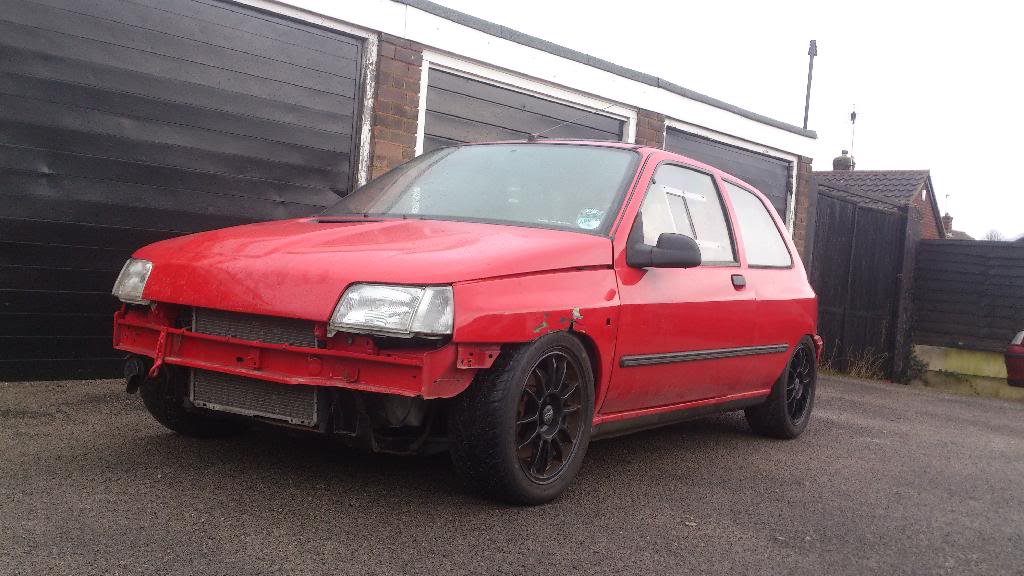 From Belper
Cars, Cimbing, Beer and The Countryside
ClioSport Club Member
Cars currently in pieces on rear end to perform the hub conversion, managed to get all four bolts per side out to remove the caliper brackets. So next task is to chop that old stubs off, flatten the mating faces then drill out the bolt holes to 8.5mm and tap to m10 1.5 thread for the mk2 bolts.

May of overdone the 8.5mm drill bit purchasing.... 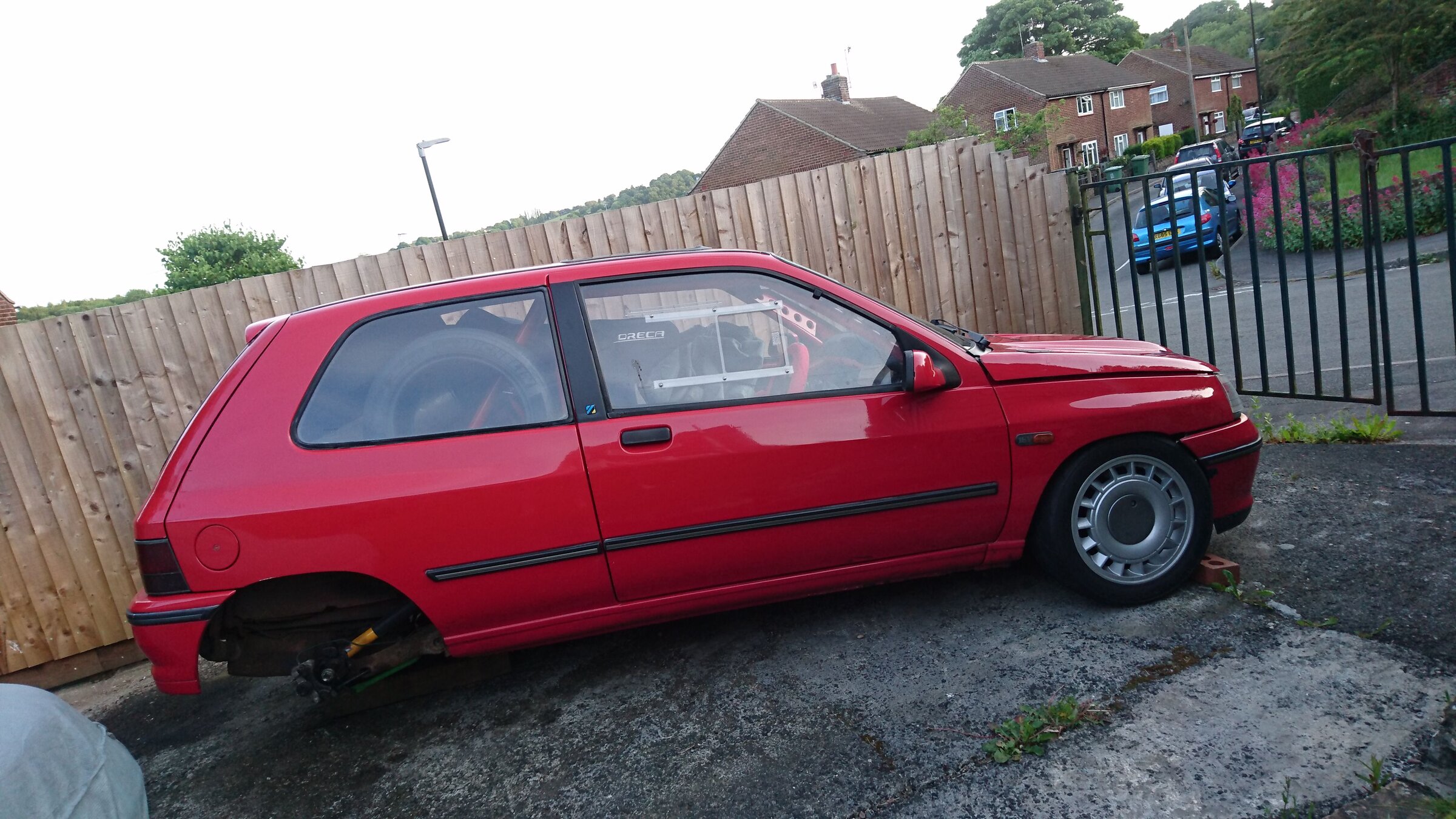 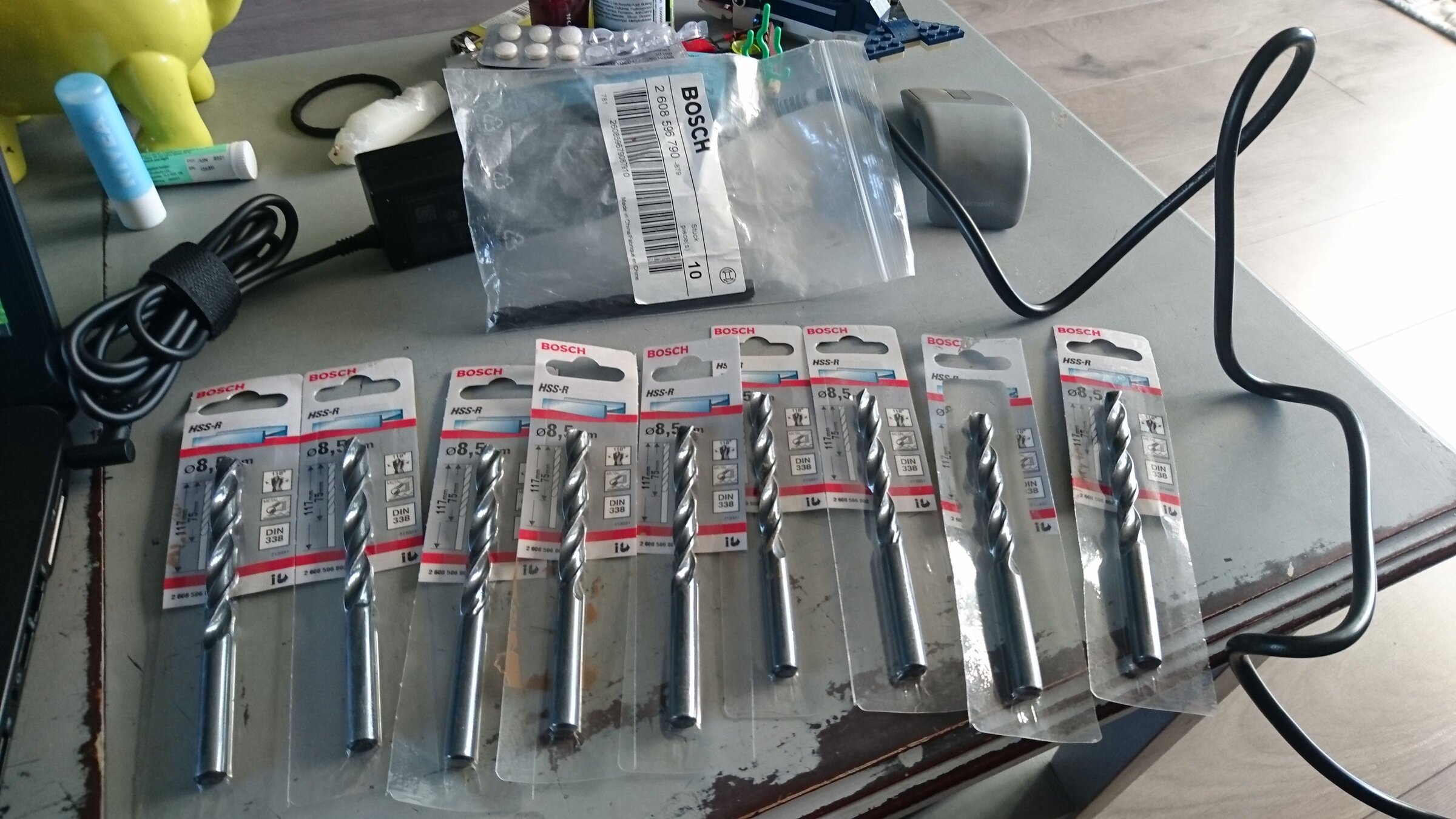 I used only one drill and one tap to do this few years ago.
Update, got bored of rear beam idea and gave up for now, so cars back together. Mallory Park booked mid May so I'll revisit after that.

Good times, be nice to drive a mk1 again, been a while

What day you booked Mallory? I’m hoping to get there in my Leon.

Chambers_RS said:
What day you booked Mallory? I’m hoping to get there in my Leon.
Click to expand...

Friday 14th May matey think it is through Javelin
Changed wheels again before MOT this Saturday, back on the original wheels for the car

I bloody love what you have done with this and it is a massive inspiration to me. Great work

16V F7R said:
I bloody love what you have done with this and it is a massive inspiration to me. Great work

Thanks matey, much appreciate the kind words and you taking the time to read!
Exhaust fixing day today, the current system is much quieter than the old mongoose but had never fit right.

So hour or so with the gringer and welder and mate Dan had it fitting much nicer, it'll do.

Bumper is melted from where it twisted last trackday so that's yet another battle scar to the smorgasbord!

Geo next to remove some camber and toe it dead straight I think initially and see how she goes.

MOT passed so all good from that side too.

Felt great to be back it in the car and after driving nothing but stock f4r's for months and months, this thing is f**king lively! Roll on Mallory Park in May!

Ben
Who stuck a welding mask on that poodle?!

Yorkshire Pudding said:
Who stuck a welding mask on that poodle?!

I had to look twice

Yorkshire Pudding said:
Who stuck a welding mask on that poodle?!


Mate Dan, his ginger Afro is of legend
I genuinely though your silencer had unpacked itself and was hanging out of the tailpipe!

@Coops Mk1 - how is your dash top secured? Have you used the OG screws in the vent slots?

Daniel said:
@Coops Mk1 - how is your dash top secured? Have you used the OG screws in the vent slots?
Click to expand...

Yeah just the back 3 oe ones, front isn't secured but sits fine and doesn't flap about

Coops Mk1 said:
Yeah just the back 3 oe ones, front isn't secured but sits fine and doesn't flap about
Click to expand...

I feared you’d say that. My clips were hacked off when the shell was painted and ive now cable tied it to the cage.

Daniel said:
I feared you’d say that. My clips were hacked off when the shell was painted and ive now cable tied it to the cage.

If it works it works

Couple more niggles ticked off, carbon sleeve fitted to the PMS shifter, mat centres replaced with dark grey over the green (so 2012) and new horn fitted to headlight area instead of in wheel arch

Geo booked at a local place for 7th

First spin out today, wash, fresh fuel and lighting the tyres up!

Car sits lower now and also dialled a bit of camber out just playing and have some... clearance issues. Nevermind all be sorted when geo gets done Wednesday

Raised the drivers side by 10mm to level it across the front axle and then sent to local place for geo.... Bit of a fight with it as my dremel spec coilover bolt slots weren't exactly analogue in their adjustment plane.... But all good, got 2 degrees neg and 10 mins toe out dialled in up front and rear was within standard spec so for none adjustable axle all good.

Also had small fail on the rear view mirror so that's having the bracket re glued overnight tonight with some loctite 326. 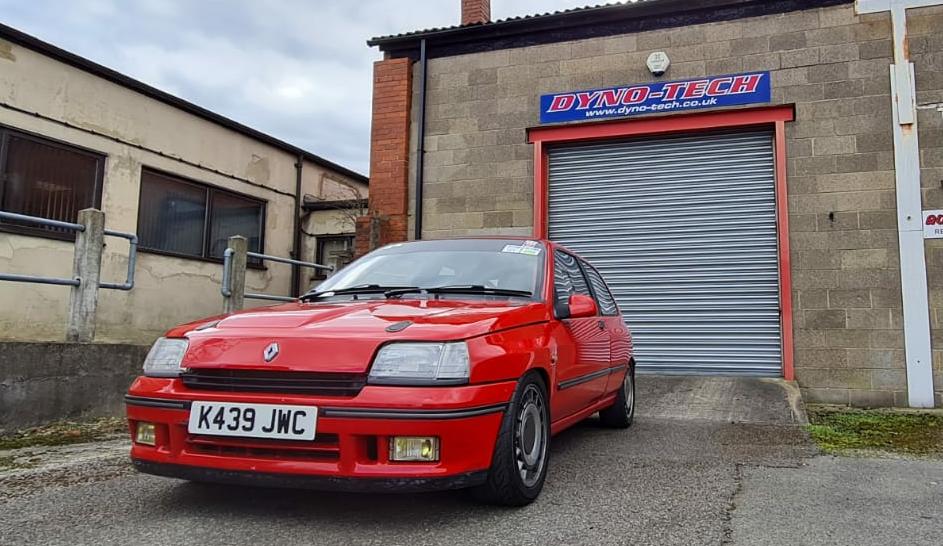 Just been using the car really now, so odd to look back over the thread and always a big job to do or issues, now I'm just jumping in it to grab milk or run to the office on the days I'm in. It's just brilliant to be out and about in it.

Nothing major left to do before Mallory, fitted standard wiper blades... Oh wait one big job, aux belt pulley looks gopping so booked in with @MicKPM for new one to be fitted next weekend.

Anyway couple of pics of her looking imo the best she ever has, even if the bodywork up close is getting rougher and rougher. Insta ready though still and let's face it that's all that matters! 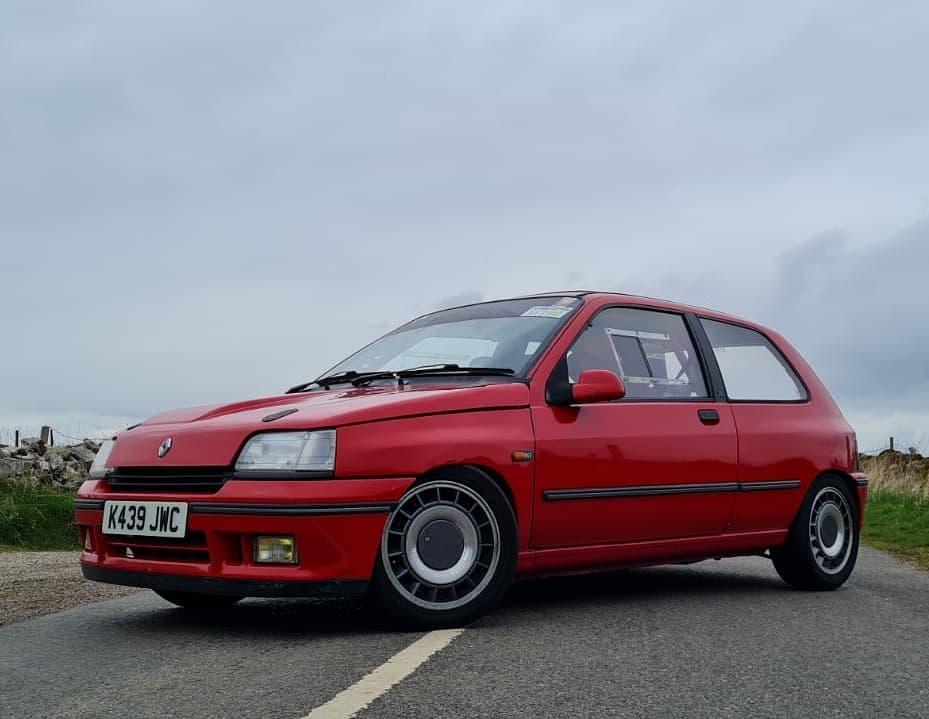 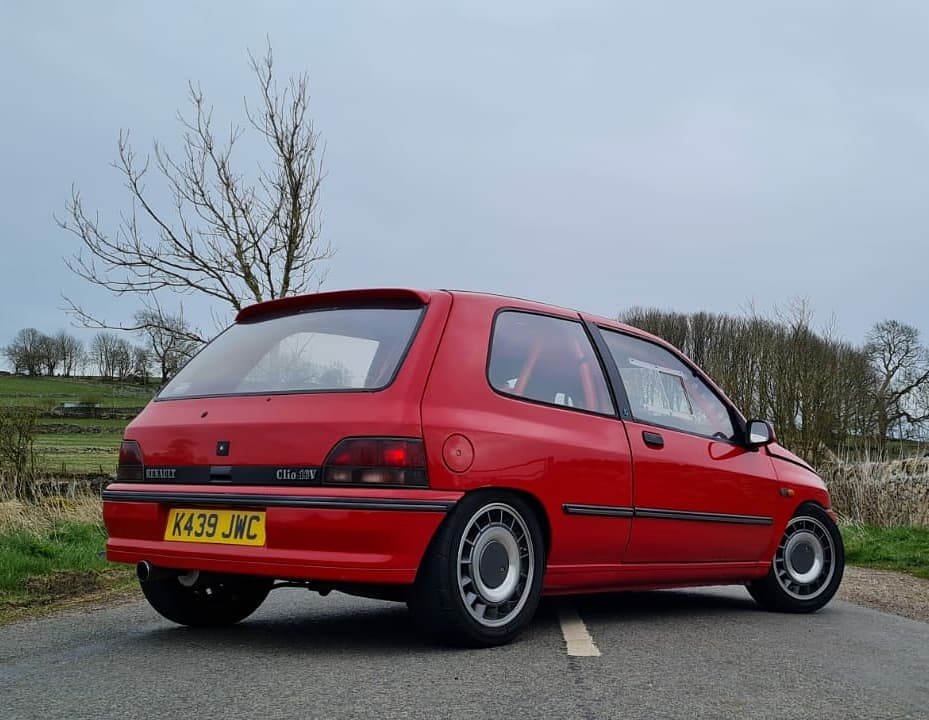 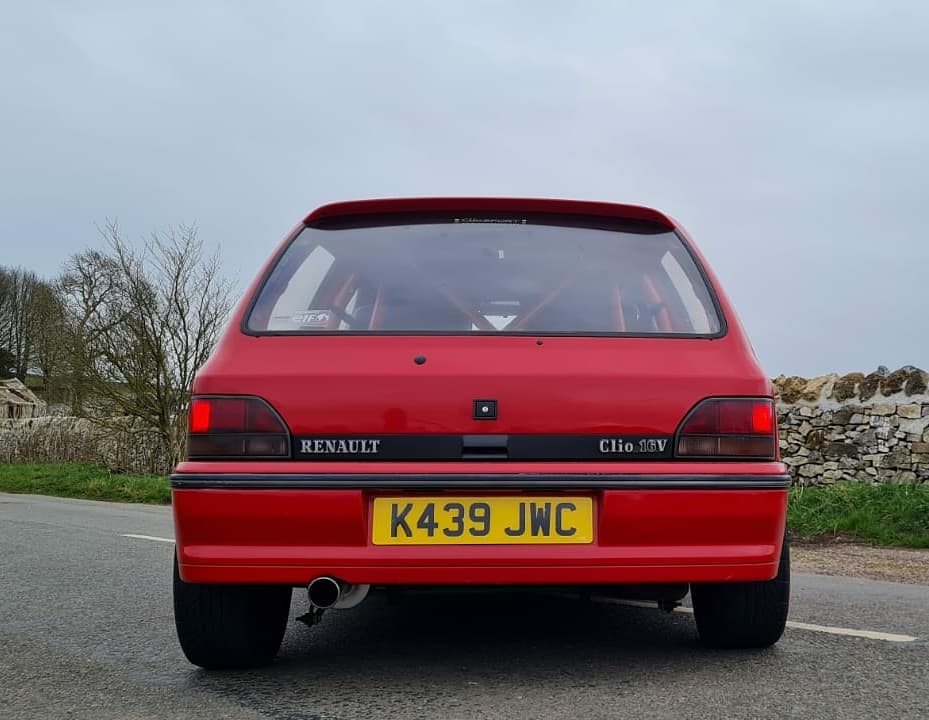 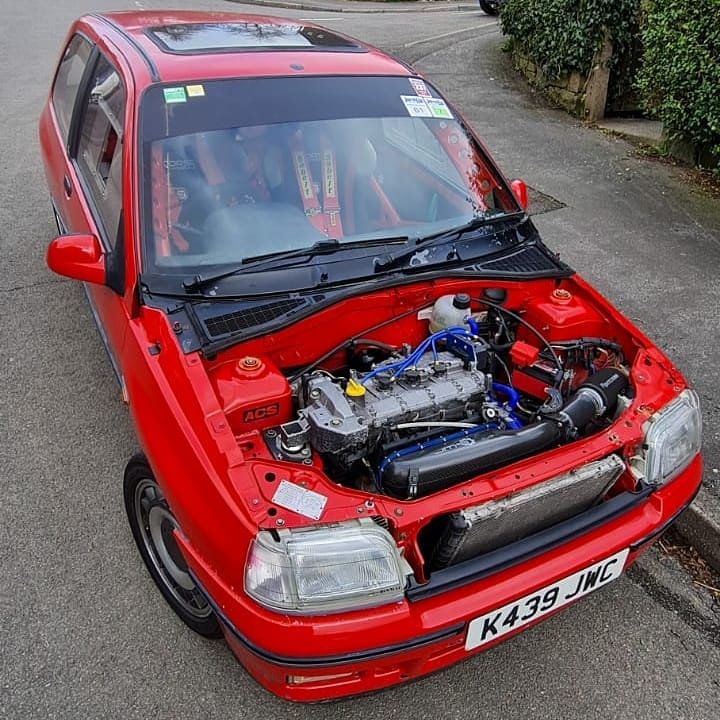 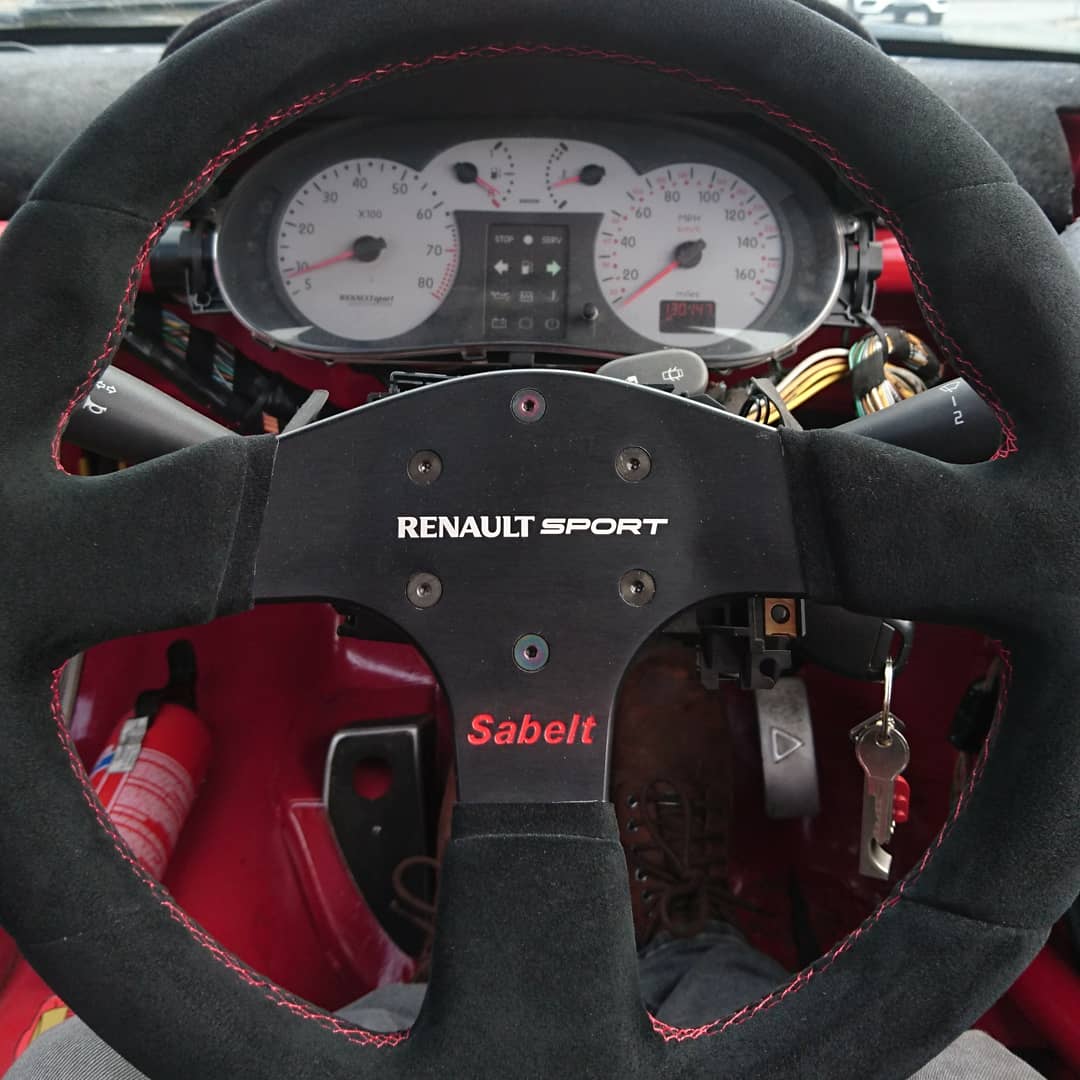 Can’t beet a 1 hour nip for some milk

Love it, but it needs Williams wheels or 2118s or something for me. Not a big fan of the turbines personally.

massivewangers said:
Love it, but it needs Williams wheels or 2118s or something for me. Not a big fan of the turbines personally.
Click to expand...

You know me, wheels change more often than the seasons. However in this case you're completely wrong, these are the best suited wheels for the car, FACT

Coops Mk1 said:
You know me, wheels change more often than the seasons. However in this case you're completely wrong, these are the best suited wheels for the car, FACT

This car look gorgeous! Defiantly had a soft spot for the mk1 & the 2's something about the front of the mk2 172. not quite sure why.
i wish i had the space. id 100% pick up another 1*2, Don't think id even turn it into a track car or anything like that, just to have a nice gleaming example of one

Coops Mk1 said:
You know me, wheels change more often than the seasons. However in this case you're completely wrong, these are the best suited wheels for the car, FACT

Personal preference I guess. They're not bad, but not the best, capital letters or otherwise

Reorganised the wiring a little too, just made it all a little bit neater.

And now annoyingly it's developed a misfire so will be chasing that out tomorrow hopefully.

Misfire cured, was the crank position sensor so fitted a used spare for now. Ordered new blue style genuine one with the repair loom too though so will fit that when it arrives
Up to Mick's today to fit new aux pulley as the old one has seen better days. They're seems to be some reports of these failing now as they're getting older so to be it's a no brainer to swap out for piece of mind.

Misfire reared it's head again so plugged it in and cleared some codes for lambda (they're mapped out) coolant temp (mmmmmm) and cylinder 1 issue (mmmmmm) and seems to be fine again now so will monitor and see how she goes.

Quick stop in the Derbyshire hills for lunch on a bench too.

Brakes squeal like a bastid so I've ordered some Mintex 1144 for road use, hopefully that'll make it manageable.

Also a sidelight blew so swapped those out for new.

Nothing else new to report really, just counting down the days to Mallory
Epic day yesterday at Mallory, for now quick pic of the car in road and 'race' trim and link to YouTube video of a few laps including dice about with my mate Dan in his Red F4R powered mk1.

Car handled a peach, so happy it's back performing as it should. Just need to start trusting my brakes again and cure the little misfire. First time in ages used the gopro too which was nice to capture some footage. 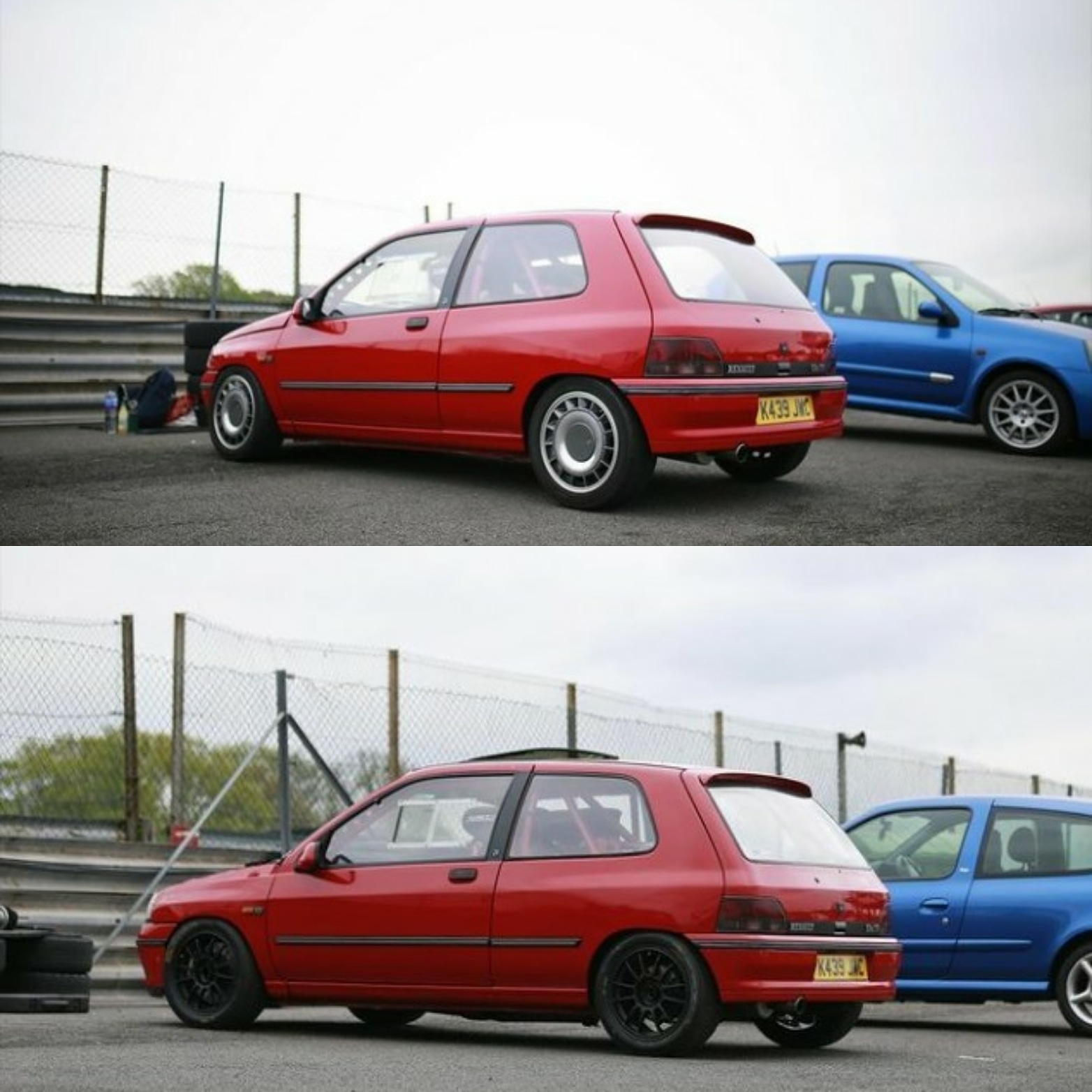