e92 + E46 M3 + Cup
Well as a few know i bought my PH2 172 back in may, the plan was to semi strip it to make it a touch faster than standard, the end result was 184bhp & no seats - http://www.cliosport.net/forum/showthread.php?t=340164, Goes bloody well & first hand i got a feel for how effective power - weight ratio works but i still had alot of luxurys like xenons, climate control etc & it was still a daily driver so a full hard core strip could not be done....

Well 2 weeks ago i picked up a mega cheap PH1, running, MOT till april, cambelt done 15k ago, she was ready to roll, but it was expected that the gearbox was fooked as it was so nasty to pull away & change gear plus there were lexus lights & wolfrace 17" alloys which are not my cuppa so heres how it looked the day after i bought it 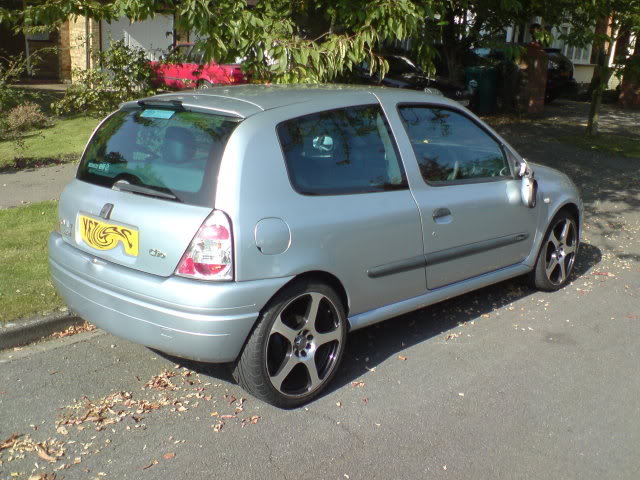 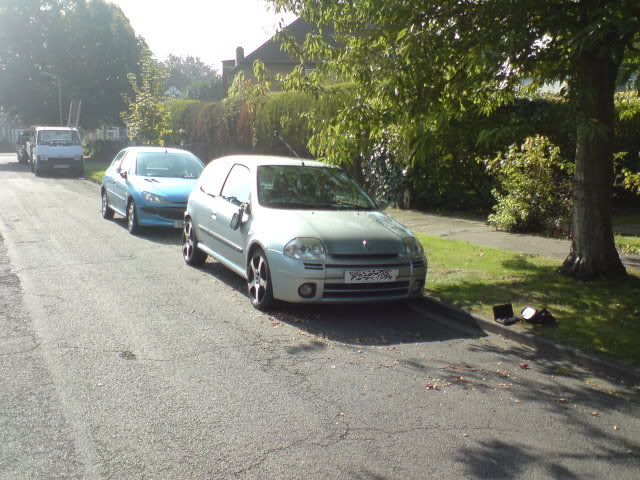 So it looked as if it had seen better days but restoring is what i love doing but before it could begin i wanted to get the engine/gearbox sorted.. so just before work began on stripping the engine, the engine mount cought my eye 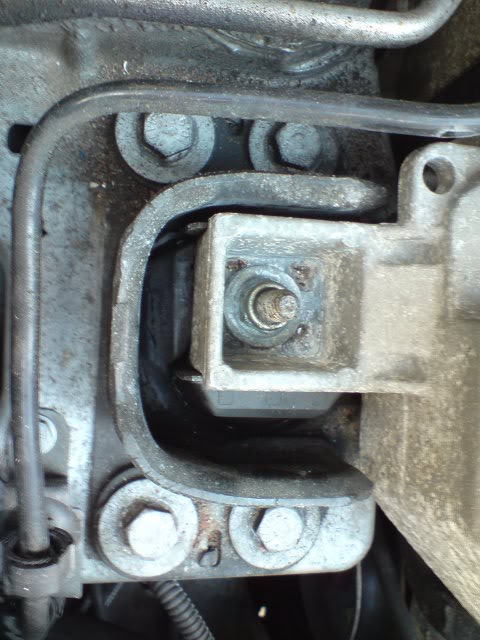 Thought it was a long shot but thought it could just be the engine mount... 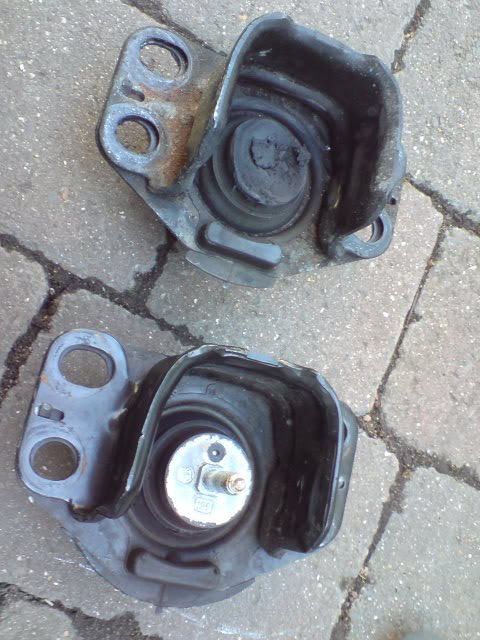 Yep the old one had completely ripped away

So bolted all the new one in & took it for a spin... FIXED So now i aint gotta take all the gearbox out

How the new mount sits 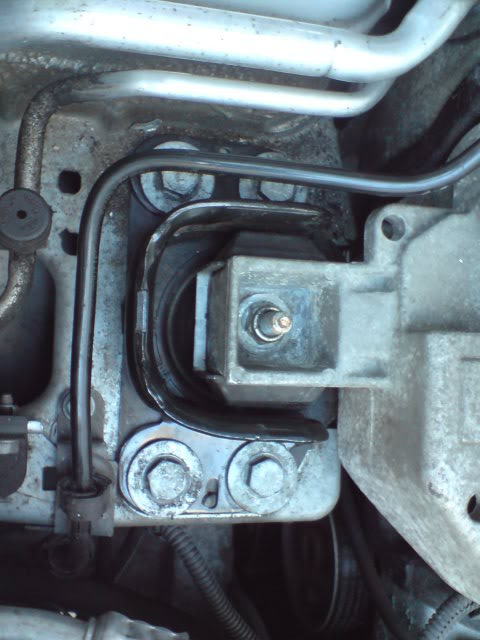 So with that sorted abit of Exterior work was carried out 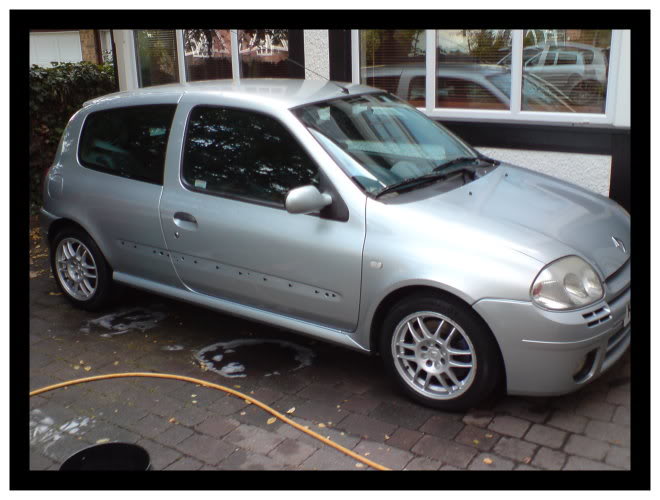 So then on the weekend Me & Ivan started to pull the thing to bits :evil: 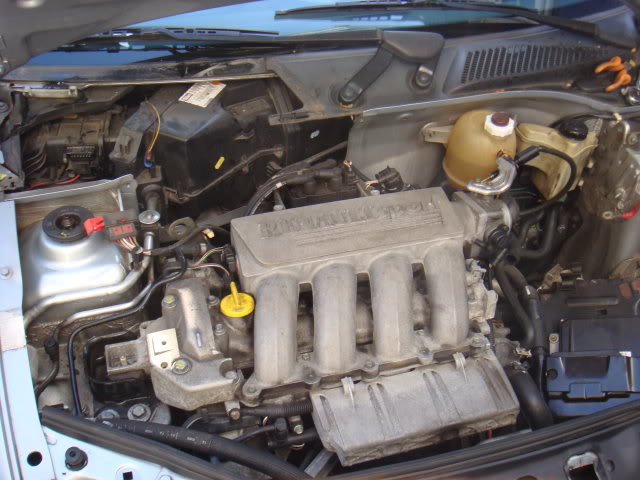 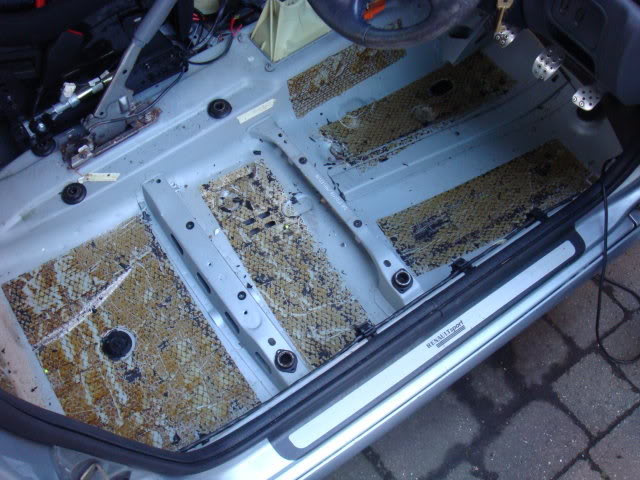 Mmmm my sexy buckets, 7kgs a side 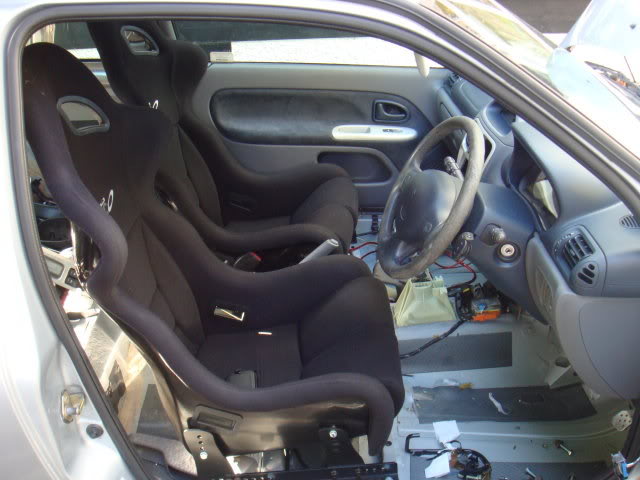 And my brainstorm for the airbox, bye bye nasty 90 degree bend 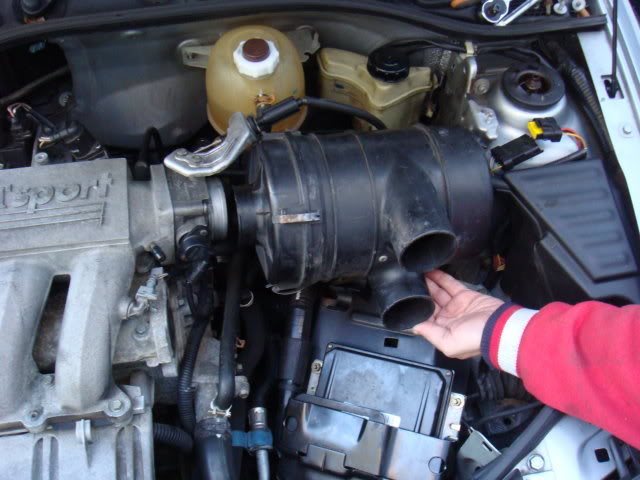 Will mount the Ecu underneath & drop the batterey in the boot or by the passenger foot well, will be using a dry cell so no worrys about fumes


Updates should be up soon

M2 Competition
Lol, im guessing amy no longer has dibs on this??

Lol, im guessing amy no longer has dibs on this??
Click to expand...


LOL, she was not a happy bunny when i was thinking about it, then when she saw me & ivan going mental stripping it down on the weekend she was far from impressed, think she's gonna get a PH2 now any hows so its all good
S

Peperami said:
Lol, im guessing amy no longer has dibs on this??
Click to expand...


very sore subject when i was at james yesterday...poor amy lol

Qashcow
eww looks a state with those rims and lights on lol. should be a good little thread. great news about the shagged gearbox / engine mount. bargain car then


I know .... Still got the Lardy Ph2, gonna be taking the coillys off it & just throwing some apex springs on it, will be the daily"ish" driver & the PH1 will just be my real full size go-kart

You got any more of your Gray-motorsport de-cats left mate?


eww looks a state with those rims and lights on lol. should be a good little thread. great news about the shagged gearbox / engine mount. bargain car then
Click to expand...

Big relief mate, should be complete sooner than i thought

Cheers guys, cant wait to get it back on the black stuff

ClioSport Trader
PM me 4 Car Finance
Glad you saw sense and decided to turn the shed into the track car, didnt quite make sense having the minter for that kinda thing, track cars end up sheddy and sometimes even get dirty ...

Gray-Motorsport has unfortunately gone into administration due to these bad financial times! the "Credit Crunch" has taken another victim hahahaa

Ohhhhh this is gonna get some abuse on the track lol, will be serviced to my standards so hopefully will hold together lol


Think its just gonna be for the track & sunday braknell cruise :evil:

Gray-Motorsport has unfortunately gone into administration due to these bad financial times! the "Credit Crunch" has taken another victim hahahaa
Click to expand...

Gray mate whats the stripage level on yours?

Monaco RS Clio 172
won't ever convince me the ph2 isn't the better one tbh.. think you should defo leave the coilys on it!!

just jealous. I'd love a ph1 for a track toy!

with regards to this james sorry to be off topic.. when you remove your back seats and seat belts.. do you get serv+airbag light on the instruments?

removed my belts today after loving the results from rear seat removal and now have a nasty couple of lights come on.

e92 + E46 M3 + Cup
Yep you'll get the SERV & AIRBAG light come on :dead:... annoying at first but i've just got used to it after failing with the bloody resistor trick.. You should just be able to plug your seats back in mate a walla

Monaco RS Clio 172
is one of my favourite clios going mate.. I am thinking of going down the carpet the back, and white roll cage, white turinis, ktec recessed exhaust..

e92 + E46 M3 + Cup
Sounds good mate, mine was fooking quick stripped.. will miss it :dapprove:... will have an even more stripped Clio now though :evil:

Monaco RS Clio 172
so are your plans full cage, coilys, tune her up to your ph2s standard?

mine is so noticeably quicker it is unreal considering. altho I did have a big b@stard sub and amp too so.. that's 30kg just on it's own... along with 172 spare wheel and kit, iso bar rear bench / seats and belts..

My argument against the cage is that the road going frame is in theory strong enough for road use/crash when it was the weight of a tank.. now that its gonna be 100+kgs lighter, hopefully, therefore if it was to roll there would be less weight on the pillars then its supposed to take so should be more than strong enough ( now waits for the pro's to say - utter b****cks your talking james :rasp: )

But yes i do plan to get the engine to over 180bhp, same mods as my PH2, will be interesting to see what removing that 90 degree bend will do

If your in the area, being as kent is not miles away, drop by & check out the buckets, you'll have them standard seats out quiker than you can blink lol & they weigh nothing
M

(great idea about the airbox, really really good... shame you have to remove the battery though (for a day drive car I mean)

Nice James nice... what are your plans on the engine ?

(great idea about the airbox, really really good... shame you have to remove the battery though (for a day drive car I mean)


Another project begins MoRpH3uS mate, handy that i dont use this daily so the batterey will be shifted to where ever theres space lol

Engine will be similiar spec to the PH2 - De-cat, re-map, matched inlets etc


MoRpH3uS, where abouts in france are you? i'm heading to the alps at christmas, dont plan to snowboard for 14 days straight & will have the Fat 172 with me lol so may try out some french twistys
M

You'll go all the way from UK to the Alps with your ph2 ? Sweet lol

You'll go all the way from UK to the Alps with your ph2 ? Sweet lol
Click to expand...

Yea baby! 4 people & all the luggage, will really test how good the Clio's are lol

Will find out what route we're taking mate & if its not to out of the way you'll have to show me some french driving roads! Could bring the RS-tunner with me

172 Race Car
Coilovers off the phase 2, got to be done

Track valver + Ibiza FR
Sounds like a brilliant project and should be good when it's all finished!!!
T

Not so much to keep the weight down... but if i could only have 2 external mods it would be coillys & the Cupra splitter! 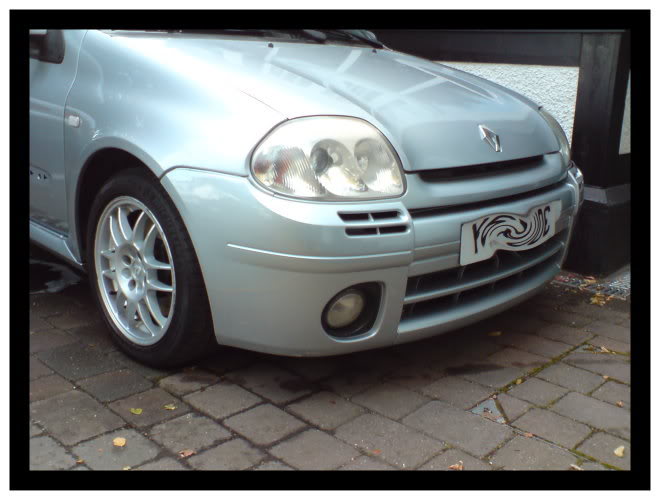 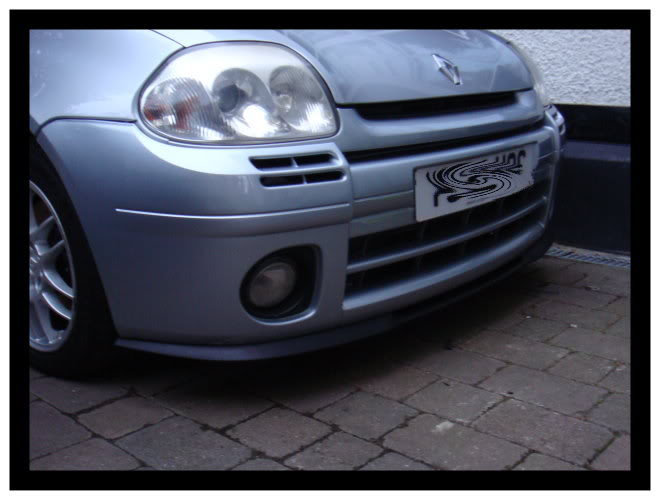 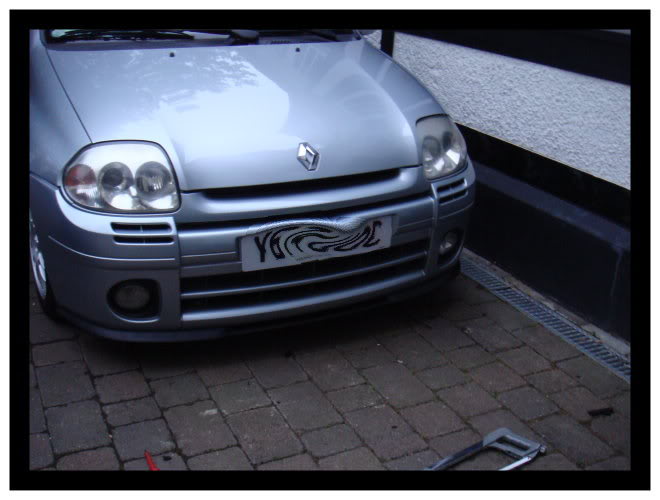 Not every ones cuppa but i think they Finnish the PH1 front end off & add a nice evil look & at only £21.40 inc vat brand new from the seat delaer i cant complain :approve: Took me 45 mins to fit, did need my brother to give me a hand, not really a one man job!


Coilovers off the phase 2, got to be done
Click to expand...

Random question, but do you have both of them insured separately or do you swap the policy between the 2 as and when you feel like it? No chance Im paying for 2 RS policies at 19!

Random question, but do you have both of them insured separately or do you swap the policy between the 2 as and when you feel like it? No chance Im paying for 2 RS policies at 19!
Click to expand...


Its currently SORN & off the road while the build goes on.. once complete i will more than likely insure it for the day to drive it too & from the track or look into a trailer... decisions decisions...... On with the build, worry about that later :approve:

You'll go all the way from UK to the Alps with your ph2 ?
Click to expand...


I did 4k miles around France, ie north, west & south coast and down into Spain via the Pyrennies (spelling?! lol) this summer so it'll be fine ...

I've got a cup - it was fine even without air con

Jamesstone said:
Its currently SORN & off the road while the build goes on.. once complete i will more than likely insure it for the day to drive it too & from the track or look into a trailer... decisions decisions...... On with the build, worry about that later :approve:
Click to expand...


Day insure is one way of doing things but most companies that offer it won't touch me because of my age, being young isnt always so good!

I'll let you get on
M

mk2ph1 rsi 106rallye
what weight will the clio be ? whats the power to weight ratio?

Not a massive one but, coillys removed from the ph2 ( ph2 now sits as high as a mountian :dead: ) & have bolted the coillys onto the PH1 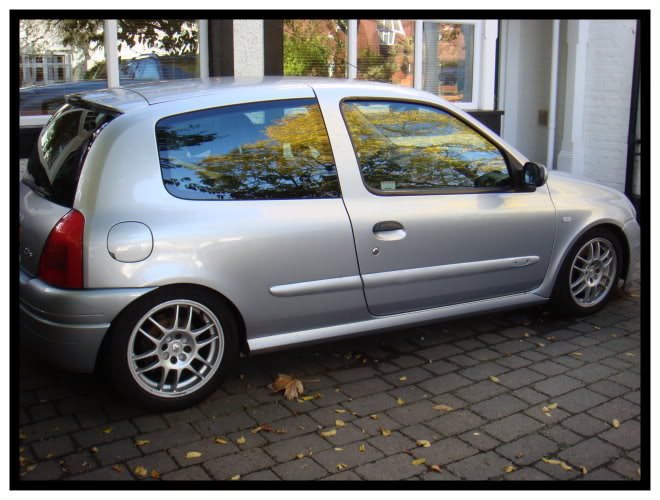 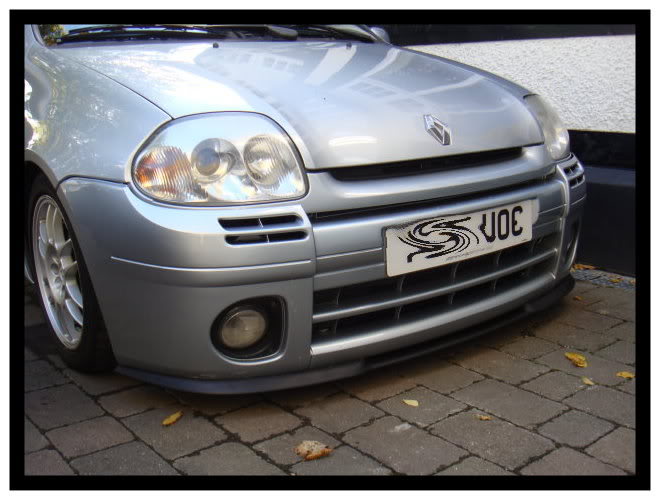 Well it seems that an inch smaller on the wheels drops it a fair bit lol, think i'm gonna have to raise it abit as thats not gonna get over speed bumps let alone my drive way lol, looks sweeeeet though :approve:


Also got my coupler for the airbox, still brainstorming what to do but so far so good 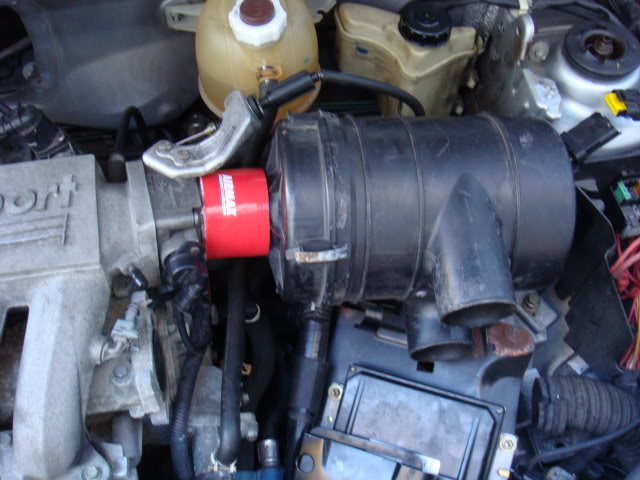 all my early stuff was done in febuary


Burp, i will soon be annoying you on msn, air-con removal is sitting at the top of the list, main concern is how to make the aircon replacment breaket :S... search for a 172cup in a scrap yard maybe?

Golf TDI
have you colour coded the bump strips since you brought it ?
You must log in or register to reply here.

A
Popping out of gear under hard braking on track