Thought i would create this thread in advance for anyone local to Castle Combe. The race is this Saturday and it has always been a good circuit for spectators. Pop along and say hi if you have nothing better to do! I am also there tomorrow for testing. 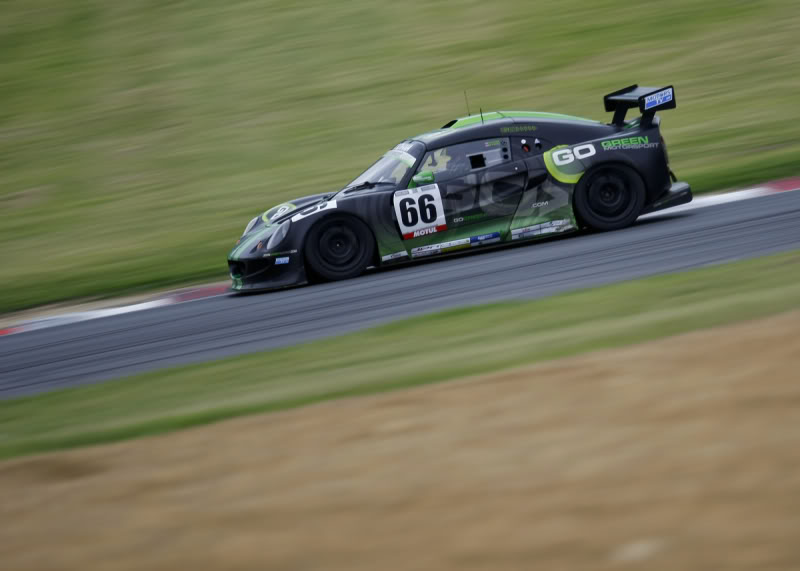 ClioSport Club Member
Alpina D3, AC Cobra
You got me all excited fucker...

Turbos.
Testing went really well. In the dry we were 6 seconds quicker than anyone else that turned up. Sadly though, it will be a wet race so will be interesting to see how we will do against the cars with traction and ABS. Hope to see some of you down there tomorrow

Good luck and I look forward to the report and some pictures if I don't make it.

Turbos.
So, the weekend was my first race back at Castle Combe since 2009 where i was punted off on the first lap.

Unusually, it was a Thursday test day, with a day's gap before practice, qualifying and the 90min race all on the Saturday. I liked being back at Combe though, it is independent and still very quaint compared to the MSV circuits; there still aren't any pit garages! But then at Silverstone, i wouldn't be allowed to take my Golf on circuit for sighting laps three-up with no helmets on! I also saw this on the way up, Nissan NXS or something... 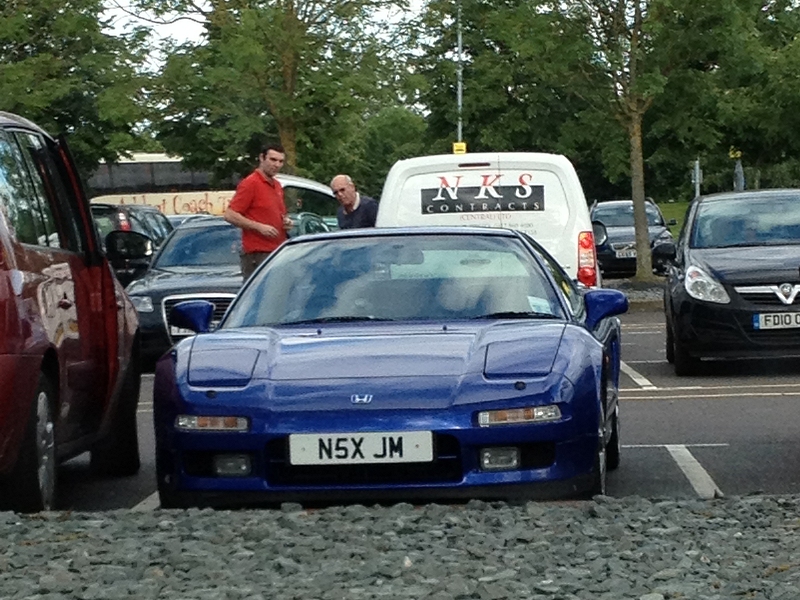 My dad wasn't driving with me due to work commitments, but instead i had Mike Lyons, a young BRDC 'Rising Star' who competes in FIA GT3, Blancpain and historic F1. I was concious i needed a good partner as one of the 2-11 drivers had Paul O'Neil (the BTCC guy and brother of Mel C), whilst Gav Kershaw (Lotus development driver), Jack Goff (Clio Cup championship leader), Martin Donnelly (ex-F1 driver) and Mark Speller (respected instructor) were all in cars too. 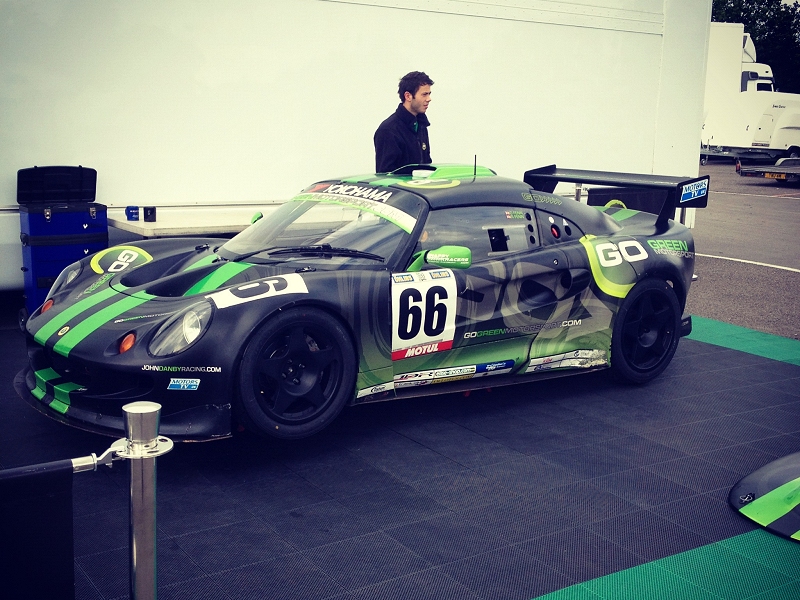 The most impressive thing about pro drivers is their ability to jump in car and be quick, with barely any climatisation. I took the first session, achieving a 1"12.9 lap (beating an old time on slicks with the K-Series), then Mike took the next two, allowing him to suggest set up changes. A damper tweak helped on the very bumpy surface, and he got down to a 1"11.6. b*****d 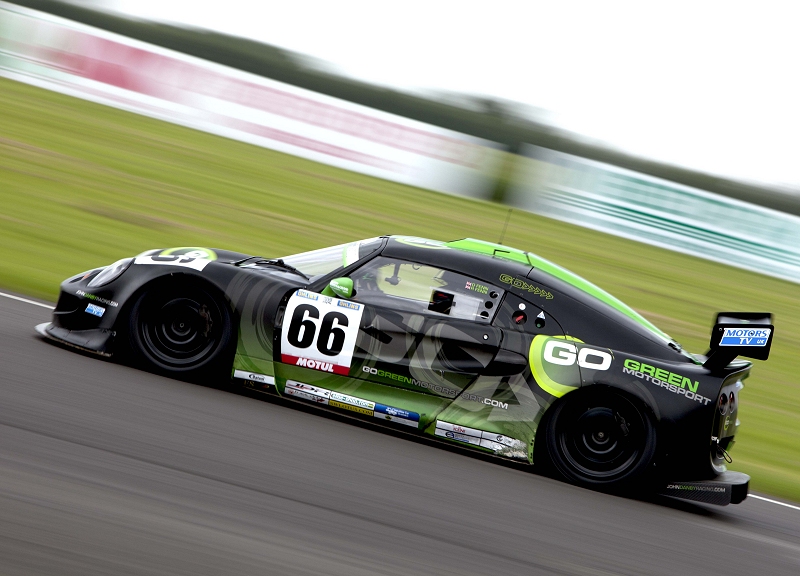 I got out for another session after we went through the datalogging. We found i was losing time under braking on the Avon Rise and i was losing 8 tenths by simply not getting on the gas early enough after the The Esses on the run down to Tower. A reminder that exit speed is king...

The predicted rain came shortly after, and i went out for a few laps to get a feel for it. The car was sadistic fun on the lightly treaded AO48s, but it was amazing watching Mike go round hanging the car sideways out of the last corner. He was going at least 9 seconds faster than any of the nearest amateur drivers on track with him...impressive stuff!

Coming back on the Saturday, i decided i would qualify as it meant i could start the race. Conveniently, it meant Mike's early practice session would be in the damp! With all the other pros out, it was interesting to see how it would go. It was Gav Kershaw on top for most of the session, until Mike started getting into the groove. He then pulled out a great time, trouncing the lot...

Of course, practice was all very well, but qualification was what counted! I was confident though; i knew what i had to work on so it was a case of 'joining the dots'. Crucially, it was also nice and dry. Pretty soon after i went out i got straight back down to a 1"12.9 with the second place Europa a few tenths down. I was told over the radio to get some space and go for another lap, so i held back until i saw no cars in front and went for it. It certainly felt a bit hairy, but i knocked off a second, 3 tenths off Mike's time in testing, which i was pretty chuffed with. 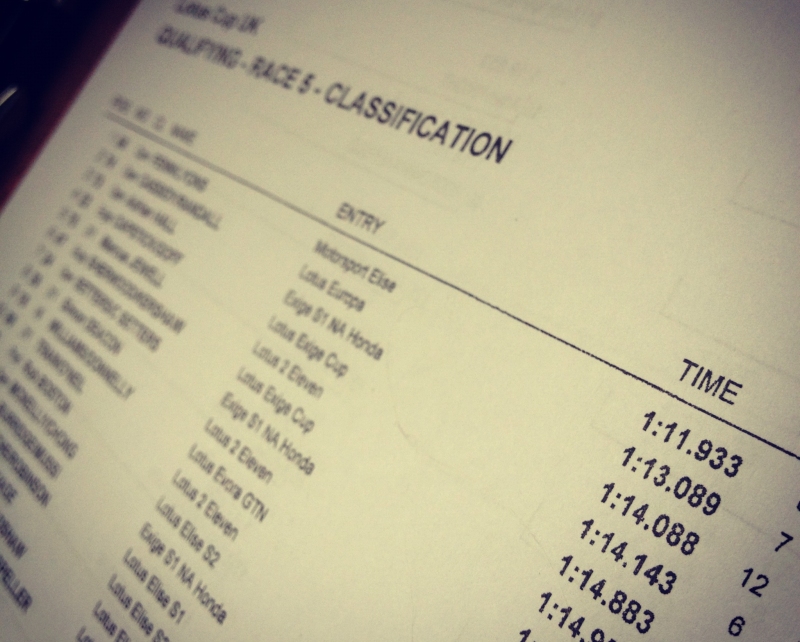 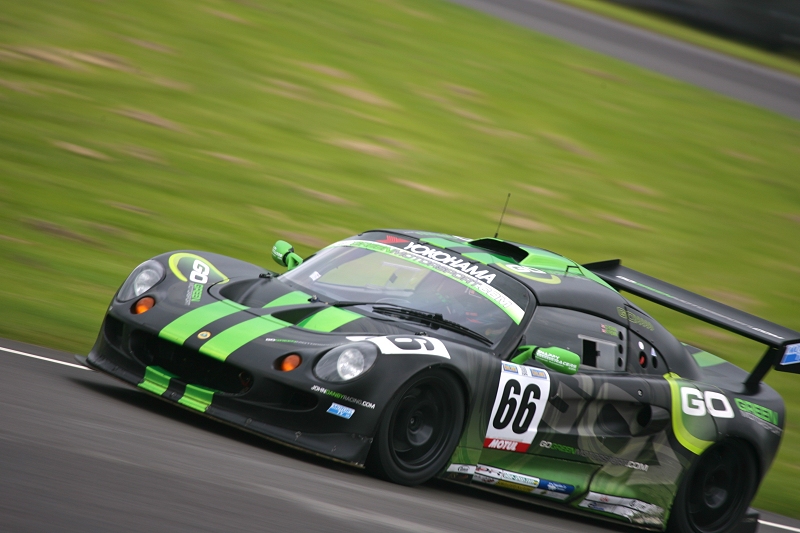 The race was later in the day and it was a case of guessing what the weather would do. To be honest, i was hoping it would be dry and was pleased to see the sun started to come out just before the race. As usual, it would be a rolling start, and i was worried this might be my undoing at the start considering we are not normally the quickest in a drag. We began the warm up lap... 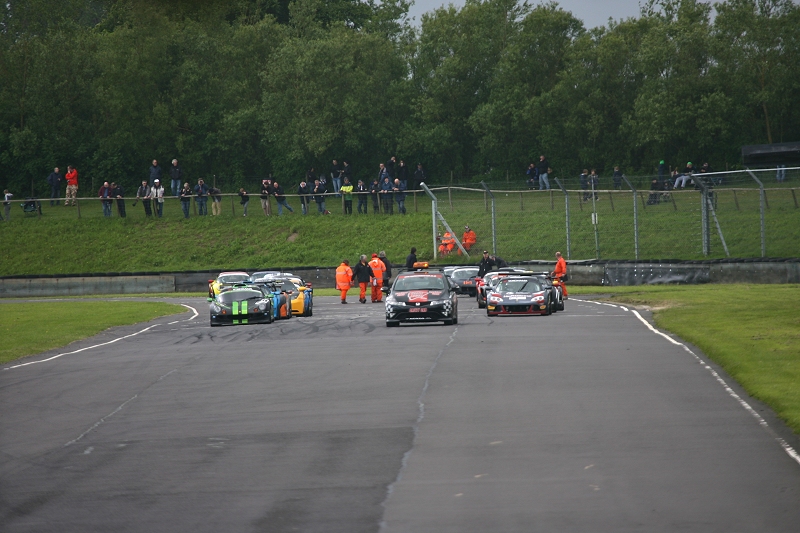 I got a good start, the second place Europa tried to time his launch but i throttled back at the last second, catching him off guard (he can't be ahead before we cross the start line, even if the lights are out) before i then slammed down the throttle. 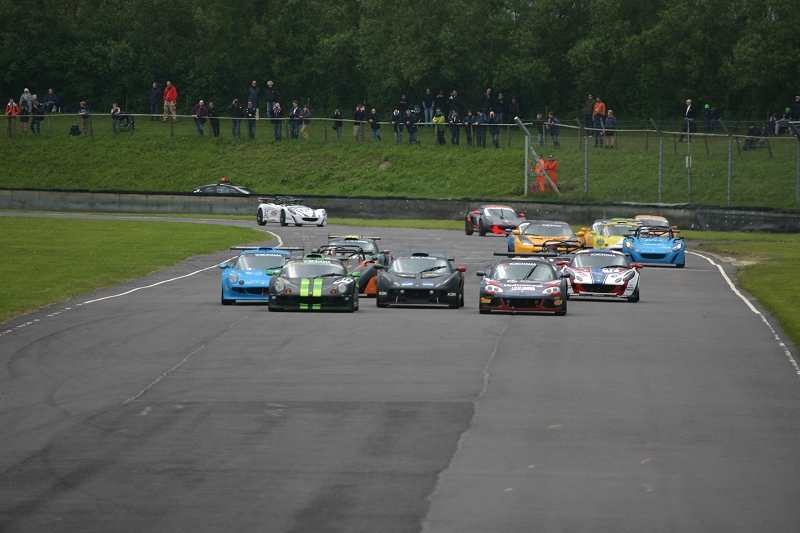 The car felt as fast as it ever has (it was recently rebuilt after the cam tensioner broke in testing a couple of weeks ago); almost like it had short gears! It meant i could hold off the Europa into the first corner. 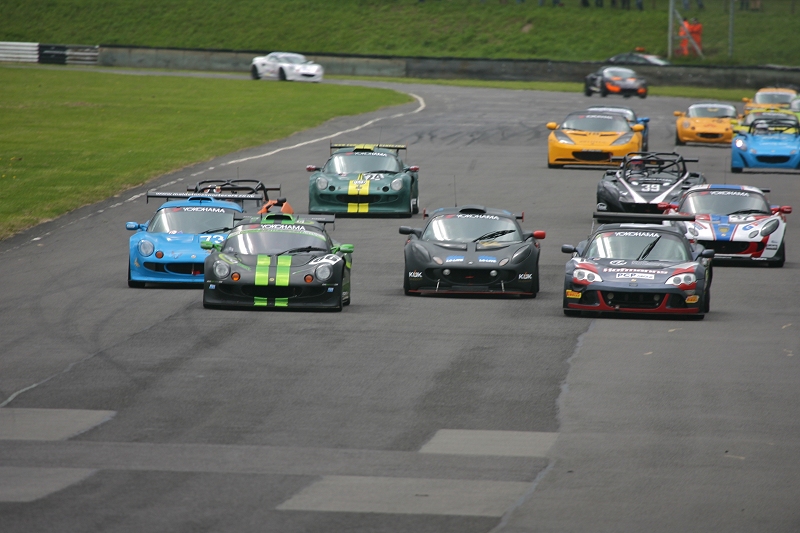 I locked up at the last corner with my cold tyres, but fortunately so did the Europa, so clung onto the lead as we started the second lap with a few tenths to spare. I then settled down, and started pulling half a second a lap. 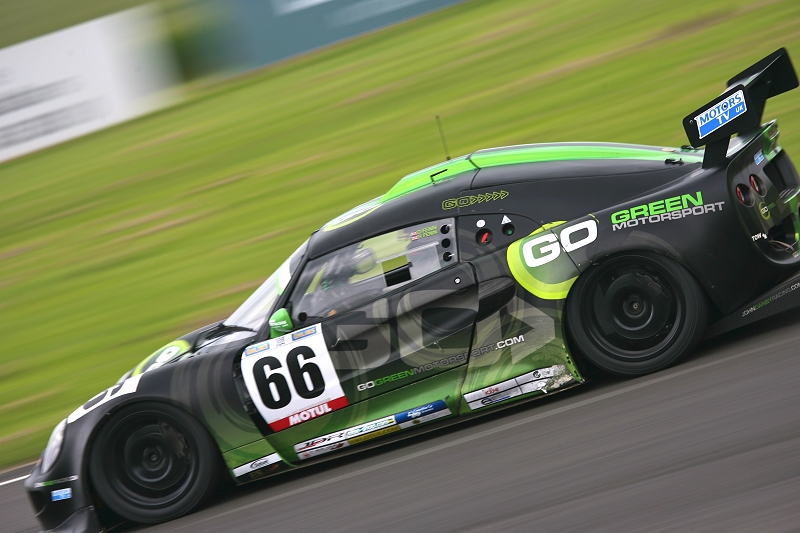 Soon i was out on my own, my only moment being when i was lapping a production car that span at the Avon Rise. 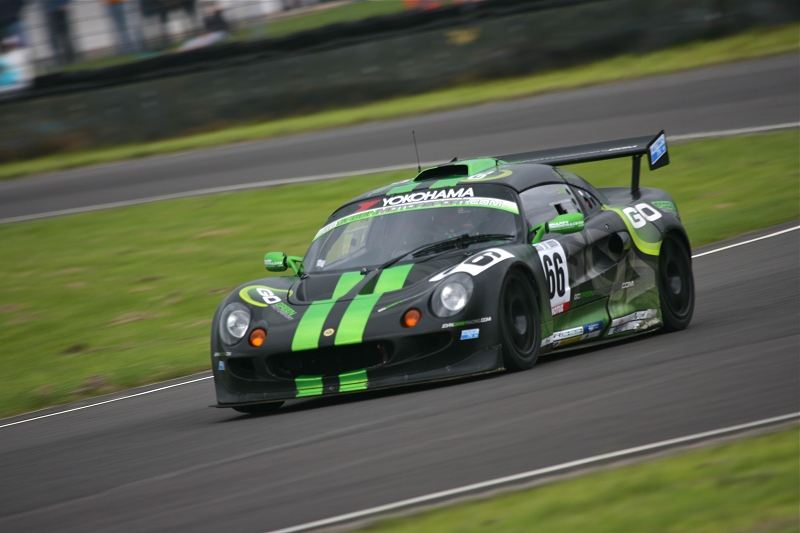 It then started raining, costing about a second a lap. Everyone had slowed down though, so i was doing fine with a lead of about half a lap. And then it came, OIL PRESSURE LOW accompanied with a flashing red light. The pit window was now open, so i coasted round and entered the pits with still a 12 second lead. Balls.

Sadly, the problem was terminal. Oil was going in, but wasn't coming out. Seems that the dry sump system had failed (ironically, installed for reliability) and so we couldn't continue (we were hoping it was a leak, where we would dump oil in every 10 mins). We retired, and were unclassified.

I don't think i've ever been more gutted in my life; but i should have known it was going all too perfectly! To put the boot in, the Europa also DNFd so the blue Exige that won at Brands took the win, despite him being well off the pace. The only saving grace was gaining fastest lap; that precious 1 point may count for something come the end of the season.

Oulton Park next, fingers crossed lady luck will be on my side!

FF-Racing 182
Your write up's are always great Sorry to hear about the issue in the race, I can imagine you would have been so gutted! I get annoyed when stuff breaks in testing never mind in a race when you're leading! Great job with getting your lap time down in quali too Hope the engine issue is an easy fix and I will keep my eye out for when you're at Oulton and try come and watch.

328, MK1 Clio 1.4
Gutting mate, great write up and pics though. I was all set to come along but last second change of plans by the Mrs stopped that on Saturday morning.

ClioSport Club Member
Punto HGT Abarth
Enjoy reading these, shame about the outcome here though. Oulton isn't far from me, would be great to come and spectate.

Turbos.
Thanks guys. Always good to meet members at the races.

Some footage from the Europa...

[youtube]0CWpHDlTeJk[/youtube]
You must log in or register to reply here.