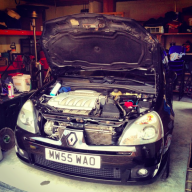 I am back in a Clio, my third one now, I just can't get enough of the little buggers! Had an old 16v dynamique as my first car and absolutely abused the s**t out of the poor thing for about a year until i chopped it in at 120k miles (for a mk4 golf.... not making that mistake again).
This summer I had a BG FF 182 to play about with before I went to uni.

Gone for a diesel one this time as I'm now a student so cheap running costs are the main factor for now. Have had my eye on DCI 80's and 100's for a couple of years now, fancied one for the silly mpg figures and cheap as chips road tax. Have had a bit of inspiration on here from the likes of Wests Renault's dci sport rep, AlexW's sport rep/1.9 conversion and also a fan sburrell93's old dci 100 too.

So anyway, here's the latest addition. It's replacing my toyota corolla T-sport that i have at the minute. 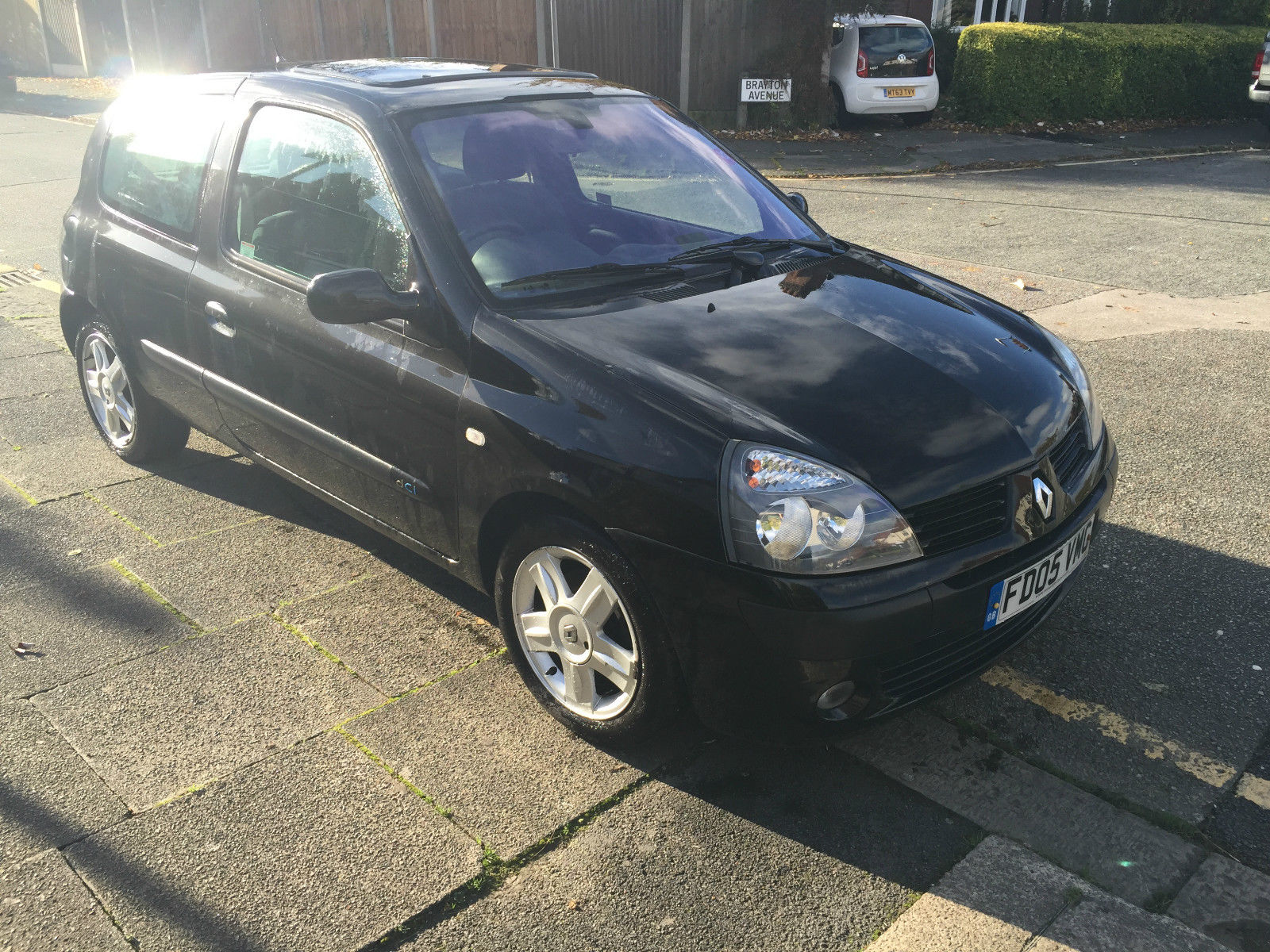 This was the photo off the eBay ad.
It's had just 1 lady owner from brand new, done 86k, has full service history and almost every MOT certifcate since 2005. oh & 10 months MOT still.

I bought it needing a lot of work. The aux belt snapped one day whilst she was out shopping and took out the cam belt with it, bending a few valves. Previous owners had the belts replaced at their garage and got it up and running again but thats when it occurred that some valve damage had occurred, so they gave up spending any more money on it.
I offered a real low-ball compared to the asking price and to my surprise her husband accepted straight away. (oh s**t, I'm at uni in Leeds, struggle to find space to park one car let alone two!!)

Anyway, went to pick it up the next day with my mechanic from the garage next door to my uni digs, on his transit recovery truck.

So this is where it's spending all of christmas. He's got the head off and it's been sent off to be skimmed and have 3 new valves etc. 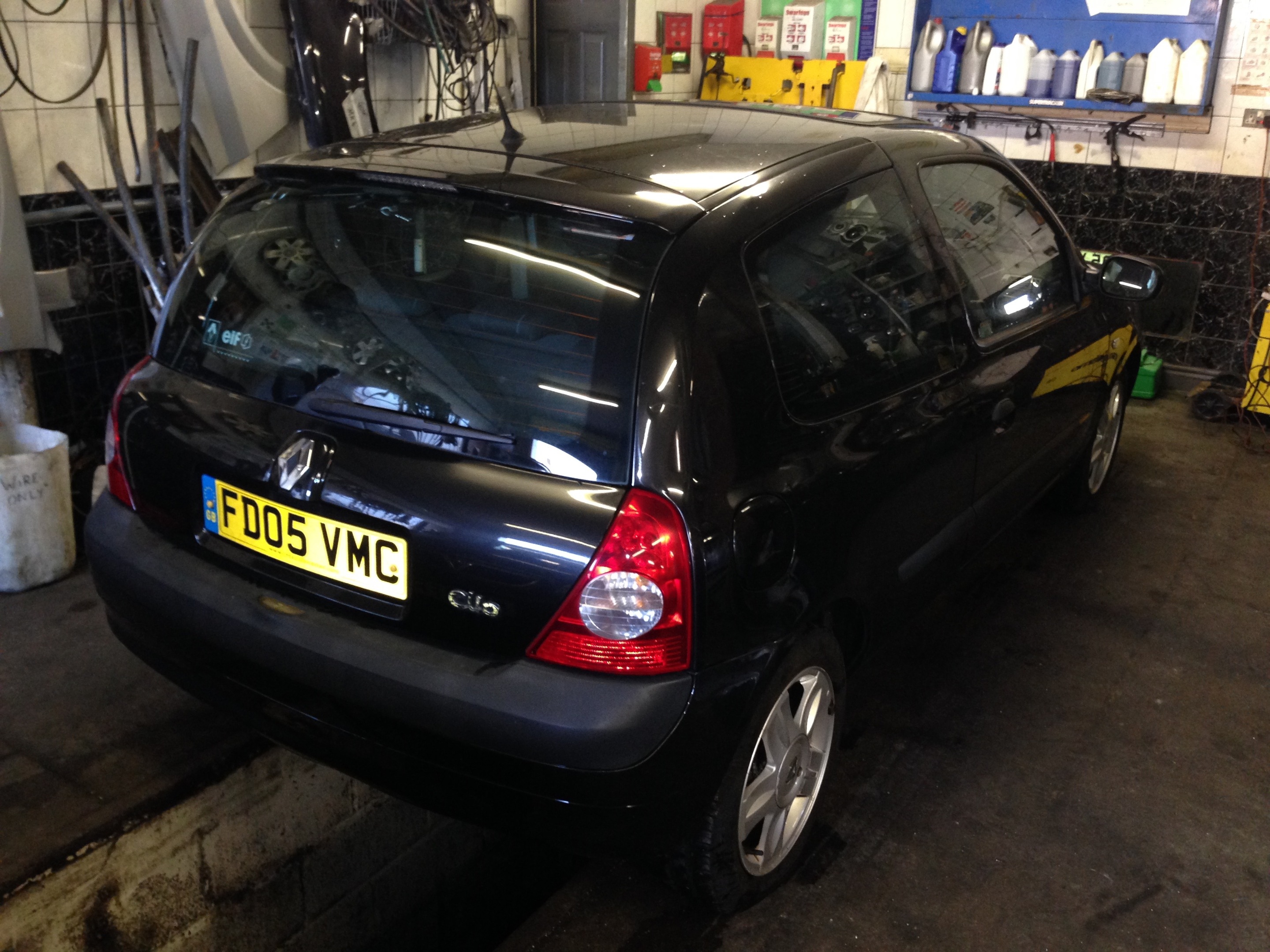 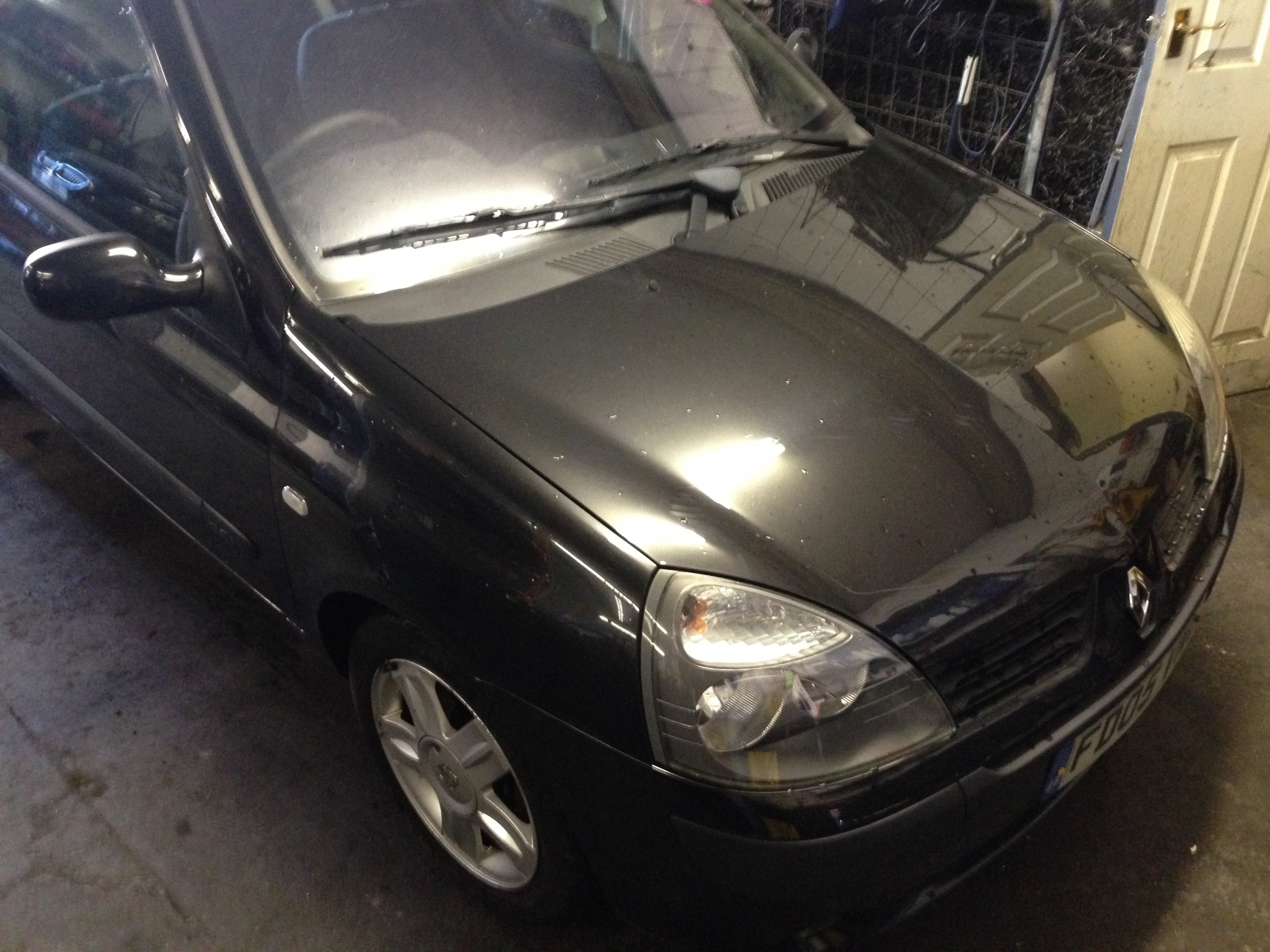 It's going to be a hefty bill as I expected but will still work out a cheap dci 100 considering what I paid for it in the first place.
Fingers crossed all goes well putting it all back together!

I plan on keeping this car for a long time, and even keeping it as a spare car when I get a toy in the summer. At a monstrous £30 a year to tax its no big inconvenience having it sit there I don't think.

Short term plans:
- Real good wash, polish, valet and detail
- touch up the nasty key scrape in bonnet
- RS grill
- LED numberplate/reverse lights
- Bright white headlight etc. bulbs
- Silverlight indicator bulbs
- Polish headlights. They're pretty good as they are but like them to be perfect
- clean EGR valve out and disconnect/blank off
- Fit sport interior and cruise control steering wheel that my mates got kicking around

Long term plans:
- 3/4 front plate but will be putting my private plate on at some stage
- Retrofit cruise control
- Straight through exhaust & decat
- Remap (RS-Tuning are 10 mins away, will pop and see them eventually)
- Potentially a big fat obnoxious intercooler although these are good standard
- Full sport kit
- colour coded door handles and strips
- 172 5 spokes/turinis/team dynamics
- cooksports or coilovers, will see what comes up
- cup spoiler
- Xenon headlights

Thats it for now, didn't manage to get any photos of the head off the engine. Will update when it's back on the road! 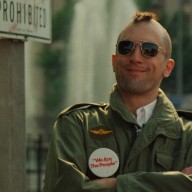 Being at uni, I'd be saving the dough rather than plowing it into the dci. IMO of course.

182
Yeah i have no intentions of an engine swap at all, just really admired the time and effort he put into his.
And yes you're right, it will be a steady project to say the least. Starting with the subtle stuff first and only add to it when things come up cheap/local Still have my old job at home and looking for work up here too

ClioSport Club Member
Racing Blue 182
Problem is that no matter how hard you try, if you have tinkered with cars in the past, chances are you'll do it to this one. It's just how it is! Lol

Just keep the costs down
1

Being at uni, I'd be saving the dough rather than plowing it into the dci. IMO of course.
Click to expand...

Agreed. Looking forward to the updates on this though mate

182
Yeah, I'm hoping sensible head will prevail but it is hard to resist a good bargain when they come up Cheers mate
1

ClioSport Club Member
Clio 197
I know exactly what you mean! I spent the best part of £1500 of my first student finance payment within 3 days! And just a few hours ago i've spent half of what i've got left on some rare exhaust trims. Some things are just too good to pass up eh :smile:

ClioSport Club Member
Trophy #224
Looks like it'll be a nice example when it's back up and running!

I'd definitely keep it standard though. It makes no sense to buy a car for its low running costs and then spend money modifying it. 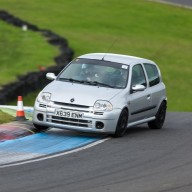 ClioSport Area Rep
E92 320d, Ph1 172
Oh hai! I see my name mentioned lol. Wish I'd never sold my dci. As much as I prefer the comfort of the Civic I have as a daily now, I loved how little it cost to run that car!

Plans sound pretty good for this. Only problem with trying to make a rep out of a dci 100 is the fact you can't use the sport running gear to get the wider look, since the gearbox/driveshafts are different, but you can always use spacers I suppose!

Glacier White Cup
Got a set of side skirts and a tatty little bit damaged front and rear bumper here?

Would all need painting for your car anyway so they could perhaps repair / tidy it all up?

182
Things haven't quite gone according to plan...

The mechanic has had the head off, 3 valves replaced, head skimmed, new head gasket and all put back together and running again.
But it's still running like s**t. He now thinks a conrod could be bent. Is this likely as I've read that the k9k 712's have stronger internals than the lower powered DCI's... ?

He is suggesting I give up with current engine and source a replacement engine...

After a bill of £700 for the car to still be at square one I am in a pretty s**t situation, and don't know whether to get another engine fitted or just get rid of the car and lose a load of money.

ClioSport Area Rep
E92 320d, Ph1 172
Have you tried compression testing it? If it has bent a rod surely one cylinder will be showing lower compression than the rest as it'll still move the same distance but further down the bore.

Another thing to check though, are the injectors all coded correctly? If they've been removed previously and mixed up when they've been put back in it won't run well.

182
Thanks for getting back to me mate.

When the head was off surely it be noticeable that one piston was sitting lower down than the other meant to be at the same position? Or does a rod only have be bent by a tiny unnoticeable fraction for it to cause these issues?

I looked at it when head was off and pistons all looked in the right places to me, although i didn't pay a huge amount of attention to them. Surely the mechanic would have picked up on this?

The more he tells me the less i trust the guy tbh, don't think he fully knows what he's doing. Think I ought to get it to a Renault specialist, at least they can check out the injectors. Reckon they would have been removed when the head was sent off for skimming?

182
he has said something about advancing and retarding the cam timing/valve positioning, and when its in a certain position it will run perfect on idle but won't rev as the valves are too far away, but when its in the proper position he can hear valves hitting piston

gstanley said:
When the head was off surely it be noticeable that one piston was sitting lower down than the other meant to be at the same position? Or does a rod only have be bent by a tiny unnoticeable fraction for it to cause these issues?
Click to expand...

The pistons will all be in different positions so would be hard to tell unless you spun the crank and one rose up noticeably less than the others. Would doubt it would be that noticeable though as if had bent a rod that much I'd imagine the rod would be hitting the side of the cylinder bore on the way up and down.


gstanley said:
The more he tells me the less i trust the guy tbh, don't think he fully knows what he's doing. Think I ought to get it to a Renault specialist, at least they can check out the injectors. Reckon they would have been removed when the head was sent off for skimming?
Click to expand...

The injectors would almost definitely have been removed to get the head sent away to be skimmed. Making sure they're coded right would be my first check. The ECU needs to know what injector is in what cylinder and if they've been put back in the wrong way (e.g. ECU trying to fire injector no. 3 but it's in cylinder 1) it's going to run terribly.

@MicKPM at Diamond Motors is probably your closest specialist if you're looking to take the car to one.

gstanley said:
he has said something about advancing and retarding the cam timing/valve positioning, and when its in a certain position it will run perfect on idle but won't rev as the valves are too far away, but when its in the proper position he can hear valves hitting piston
Click to expand...

That sounds a bit iffy to me! There's no valve timing adjustment on these at all from what I can remember.

ClioSport Club Member
182 RaceVan
That would be my line of thought, injectors mixed up and require coding

182
Legend mate, big thanks!! Yeah I'm familiar with Mick but it's a bit far to take car down there on a truck. Being in Leeds there's either R S Murray or queens service station who are both renault specialists but you hear mixed reviews for both