Clio MTV
Hello Everyone, i posted in the "new to renault clio forums" saying i got a 04 clio but i lied.. that car fell through and i didnt get it
got a renault clio MTV instead.. in GOLD! if thats the proper colour of it?
Heres some pictures of when i first got it.. 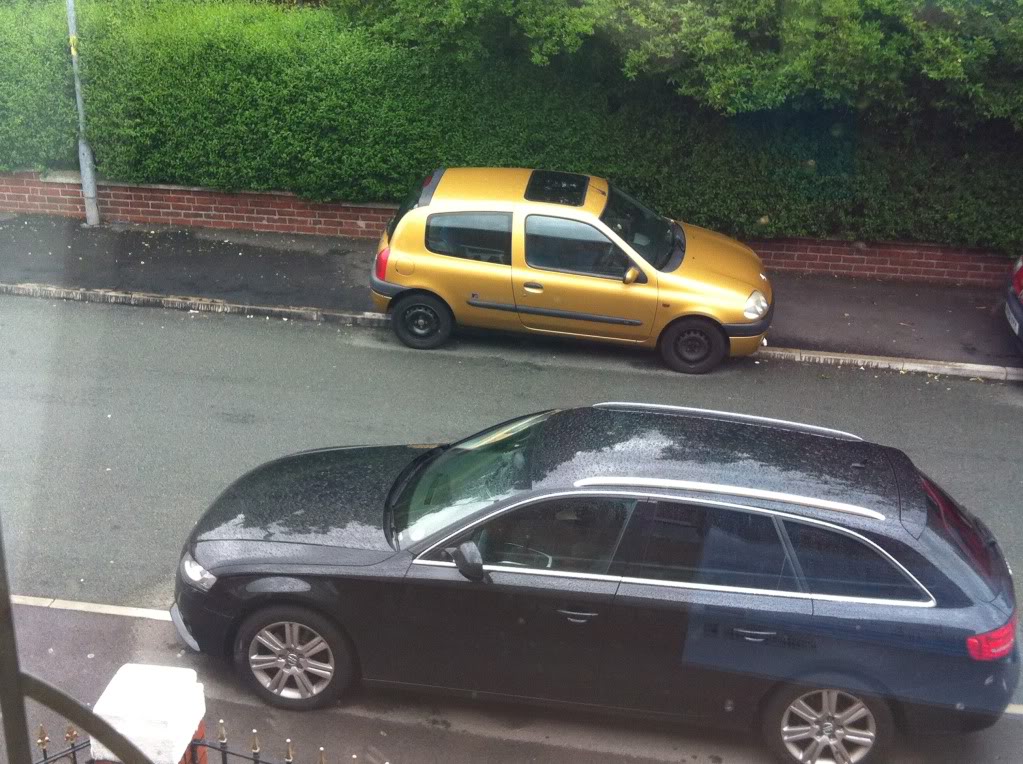 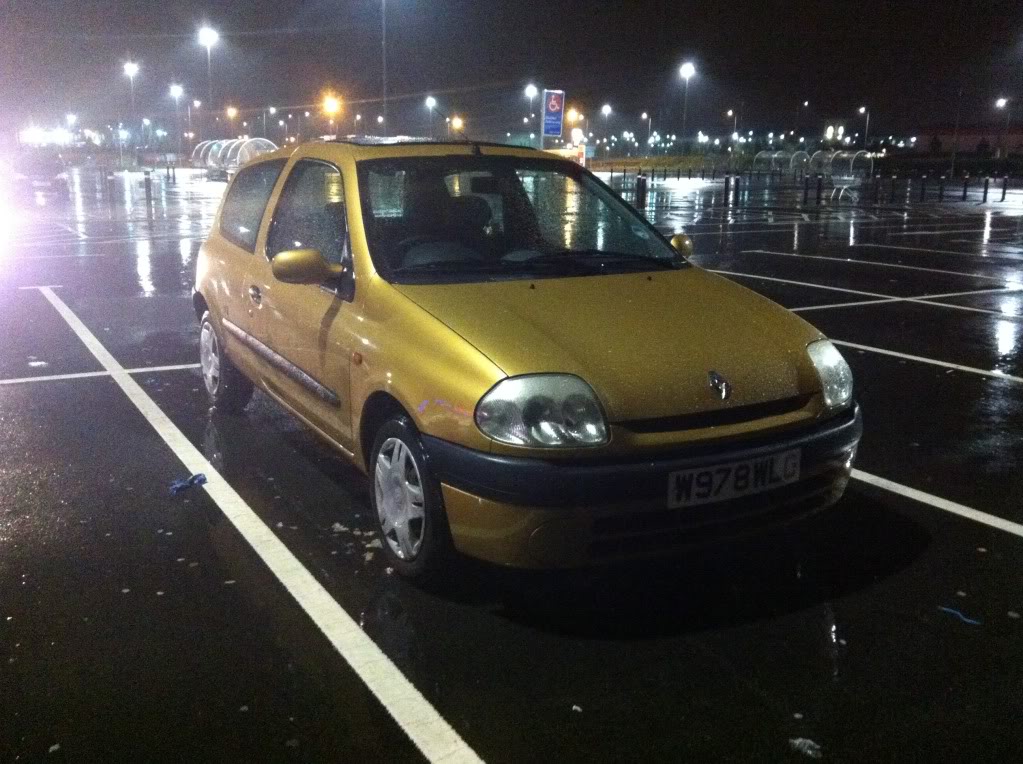 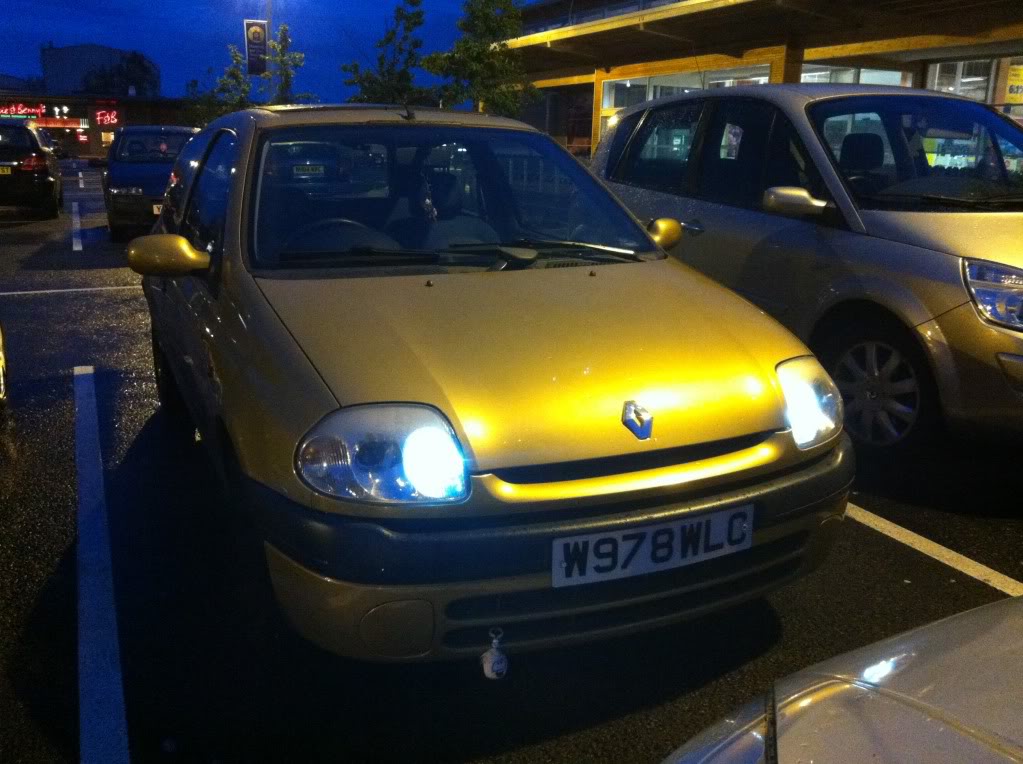 changed the sidelights to SMD ones, going to change the headlights soon too, im really not sure on those headlights tho, i might go for the depo ones. oh and im going to get some fog lights too
Alloys - im thinking of getting the clio ones, or just spraying my steelies like i did on my corsa not sure yet tho, going to debadge it too.
does anyone know if 01-05 rear lights would fit on this model? really dont like the back lights :S

Benga
"does anyone know if 01-05 rear lights would fit on this model? really dont like the back lights :S"

Yes they'll fit like a dream! And nice project, should be good!
D

Clio MTV
Woo! was hoping they do, and thank you

ClioSport Club Member
Boostvagn.
Yup, the 01-05 lights fit, done the conversion myself, it's pretty easy (there's a guide for members on here).

Put HID's in the standard headlights then leave them well alone, they're the best looking for the car.
D

McGherkin said:
Put HID's in the standard headlights then leave them well alone, they're the best looking for the car.
Click to expand...

Are they easy to install because i really do want HID's in them, and do you know how to bring the shine back into the headlight lens as mine have turned a yellowy colour

ClioSport Club Member
Boostvagn.
Yeah, HIDs are easy to install. Just a case of taking the old bulbs out and plugging them in, then tying down the ballast and connecting it to the power (mine even had the same connections as the bulb so the connector just plugs straight in)

As for fixing the lights, search headlight correction on here - fairly easy to do, just needs a bit of elbow grease!
D

Clio MTV
Thanks, how much was your HID kit? and think ill have ago at polishing the lights with G3.
I took the rear lights out before and oh my god! how easy are they to remove! my corsa ones were a bast to remove, so going to pick some newer lights up, and a dynamique spolier

ClioSport Club Member
Boostvagn.
My HIDs cost me £30 from another member
D

Clio MTV
Update
After a few weeks i finally got my boyfriend to help me with the headlight correction, we used G3, a scouring sponge and some water and do you know what... they came up like a dream! but it started to rain so only got one done, still need to do the drivers side, here are some pictures ..
Before on drivers side... 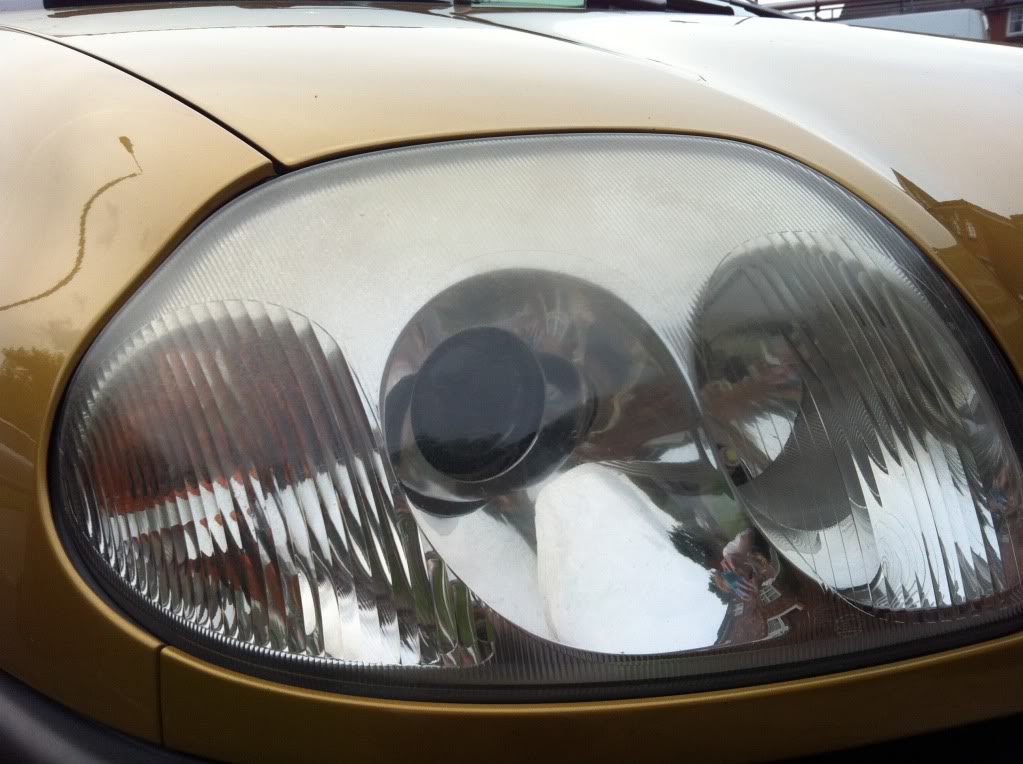 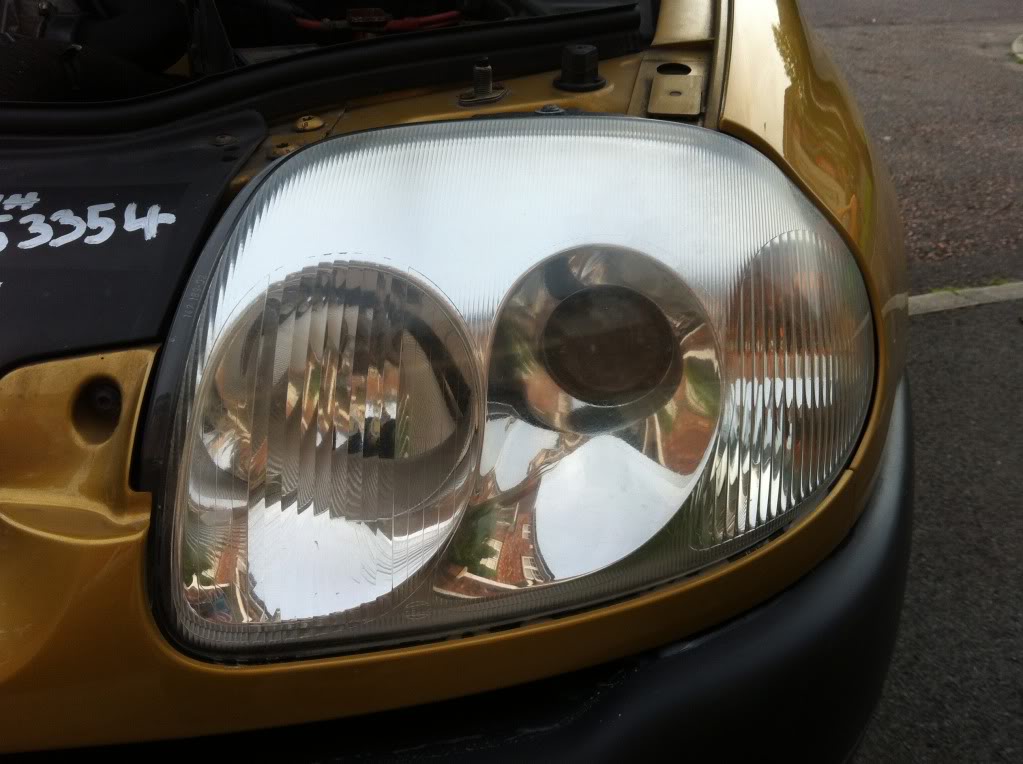 now, got myself some foglights! £20 from the scrap yard! just bought a wiring kit and switch so going to do that sometime this week
Also on this picture you can tell the difference between the headlights 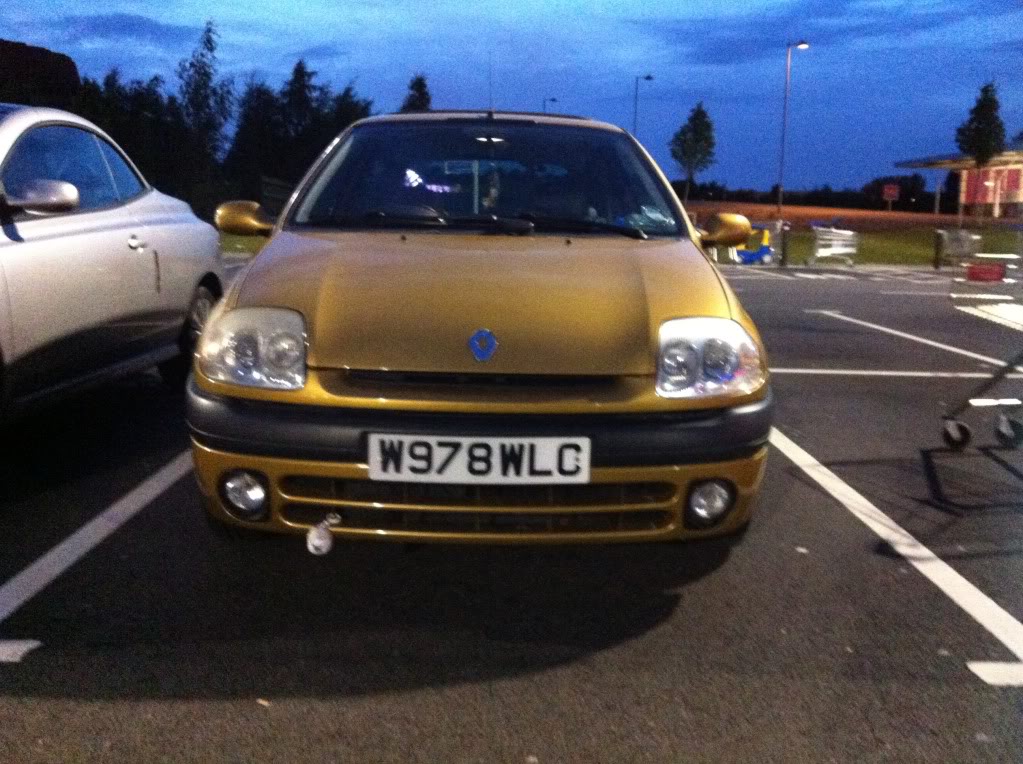 Then changed my rear lights to the 01-05 ones and debadged it... but then realised it leaves silly holes in the boot so goning to get some new sprayed badges! 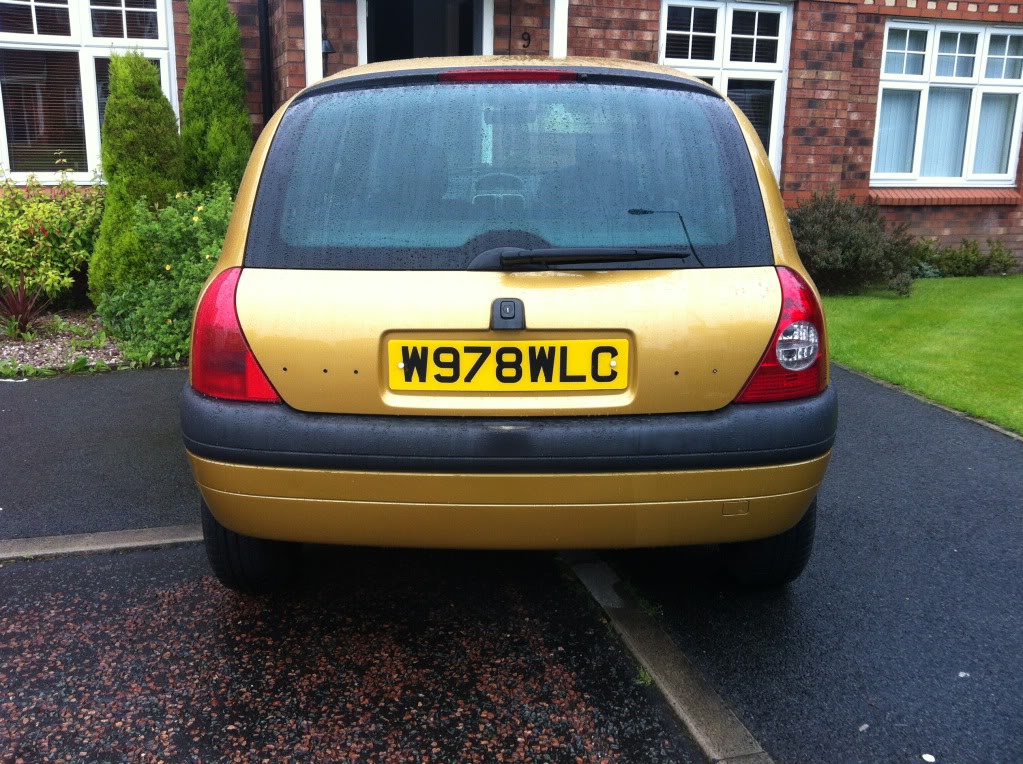 Then finally got some clio alloys!! .. makes it look quite sporty .. i love it.. going to spray them tho, but not sure on which colour. 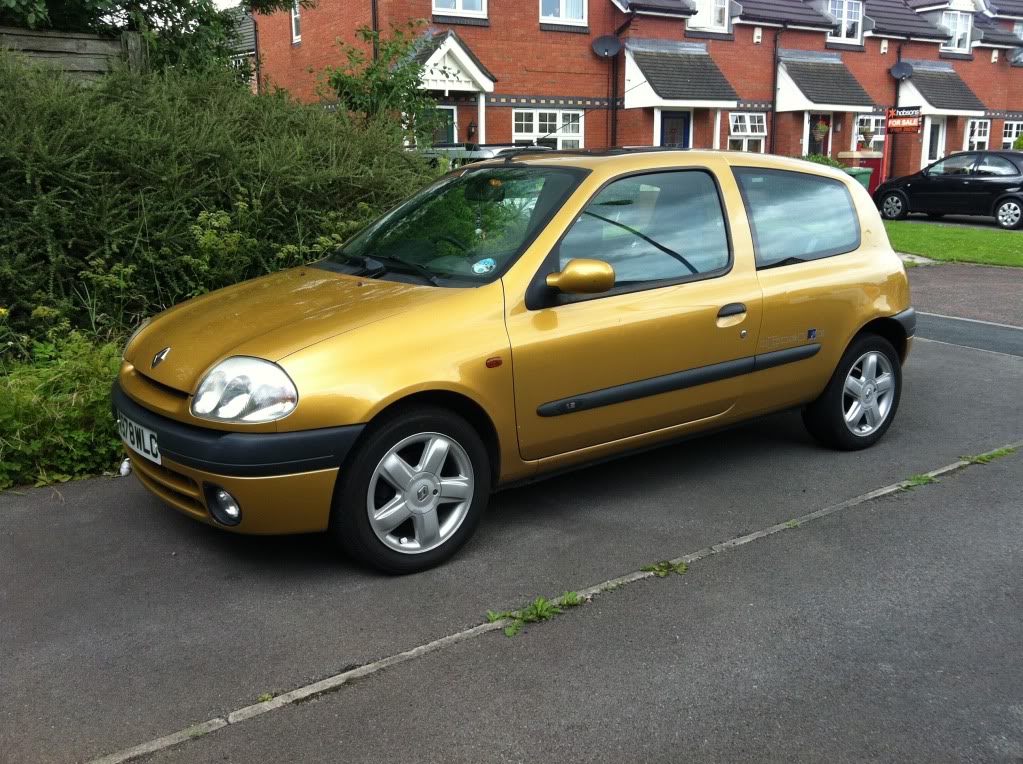 As my birthday is coming up soon ive asked my mum and dad for a HID kit! and im getting it ! Wooo!

May have to get fogs at some point, they look more tempting every time I see them :L
D

May have to get fogs at some point, they look more tempting every time I see them :L
Click to expand...

Thank You, since i got the car i wanted them everytime i seen them on another clio
you should invest in some..
D 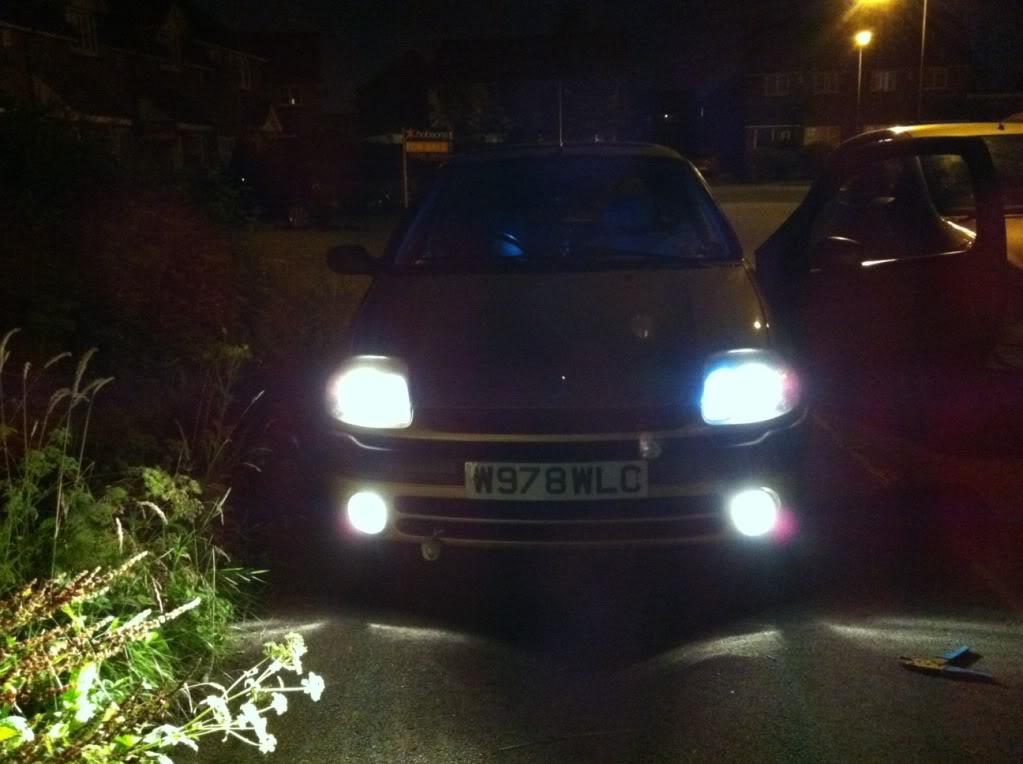 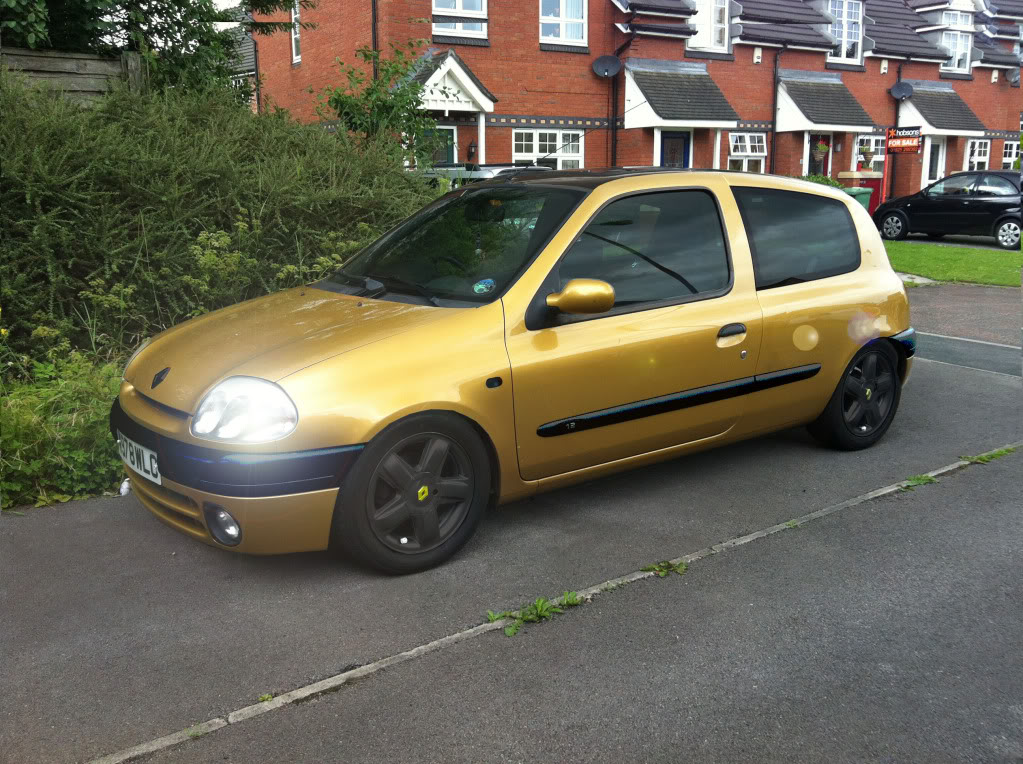 RB 197 LUX
Deffo do the front badge black looks better on any colour car, i vinyl wrapped mine, but reckon spraying is easier, love the wheels black and gold diamonds! Im going for a black theme with mine as well
D

lukeb23 said:
Deffo do the front badge black looks better on any colour car, i vinyl wrapped mine, but reckon spraying is easier, love the wheels black and gold diamonds! Im going for a black theme with mine as well
Click to expand...

Thanks! Going to try and get it looking like my photoshop picture by 2013! haha..
Yeah the black theme seems pretty easier than any other colour especially with the gold.. i can never find another colour that goes with gold.. :S
D

Inferno 182
Plus black matches the bumpers and sidestrips. Think they look quite good gloss black instead of colour coding them. Nice car

P.S. I'd invest in a dynamique / 172 spoiler, look much better and can pick them up from the scrappy for about a tenner

Petrol Blue 182.
Loose the thing on the front bumper!
The photoshop looks good, I think that will be a great alternative to colour coding.

As above with the spoiler. get a dynamic spoiler from the scrapyard for a tenner. Then save and upgrade to a cup spoiler 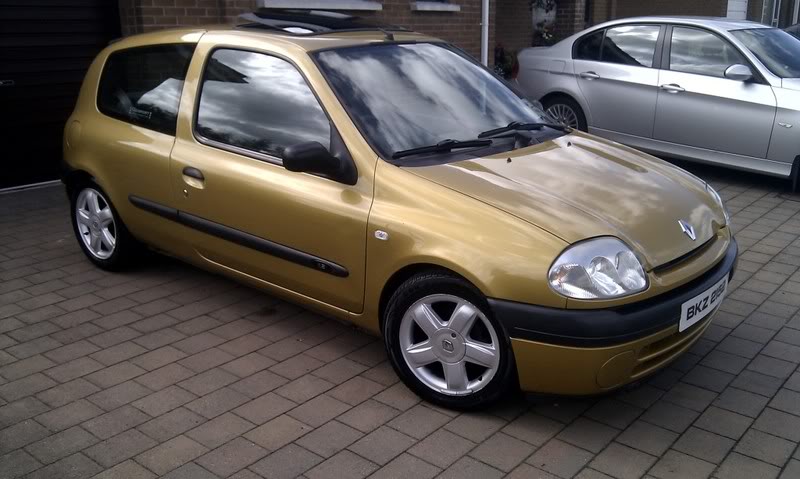 Clio MTV
Thanks for the comments people
yeah im looking for a dynamique spoiler or a cup one deffinatley!

Yeah i thought i did quite well on that photoshop considering ive not used it since i left college in 2009!
I did try colour coding it but trying to match the colour was quite hard so just stuck to gloss black and i love it!

@rapid06
:approve: Woo! i do love this colour! not many about round my end
B

320d
Good progress on the car.

One of the shots looks like Tesco in St Helens?? That right?
D

I fitted fog lights to mine this week, although my wiring loom doesn't have the connector for them so I'm gonna have to hard wire them to the battery etc myself :/

Clio MTV
Heyy everyone! Not posted for a while! been a rather busy bee the past month or so
progress: its not much but its still something!
GOT MY HID KIT FOR MY BIRTHDAY! WOOO! also installed a DRL under the bonnet, it may not be everyones cup of tea but it gets some looks and its had some good comments about it, i just see it as its something different, dont like being boring

@rapid06 Thats what i have had to do with my foglights, got a little flick switch in my ashtray, when people ask what its for i'm like.. its a boost switch! haha :rasp: Its wasnt to hard actually.. well my boyfriend did it so i can't complain 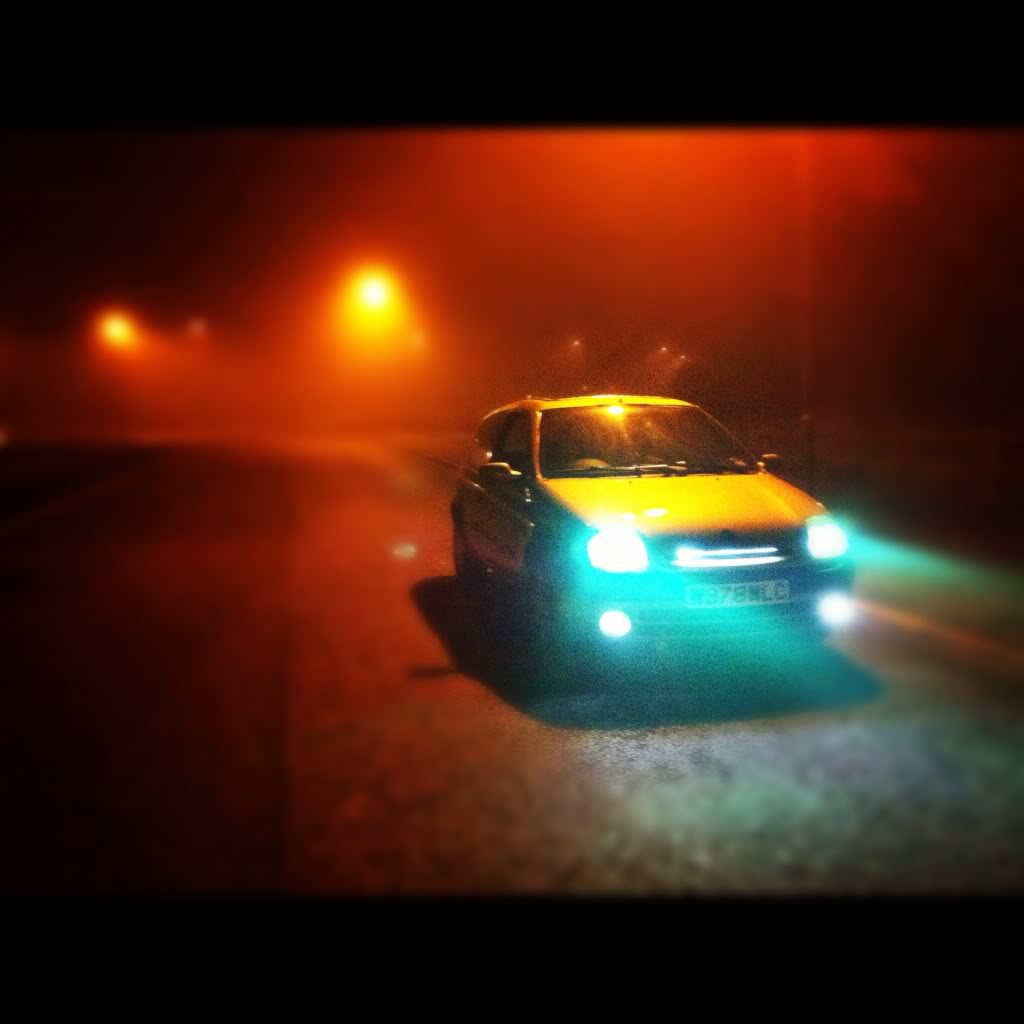 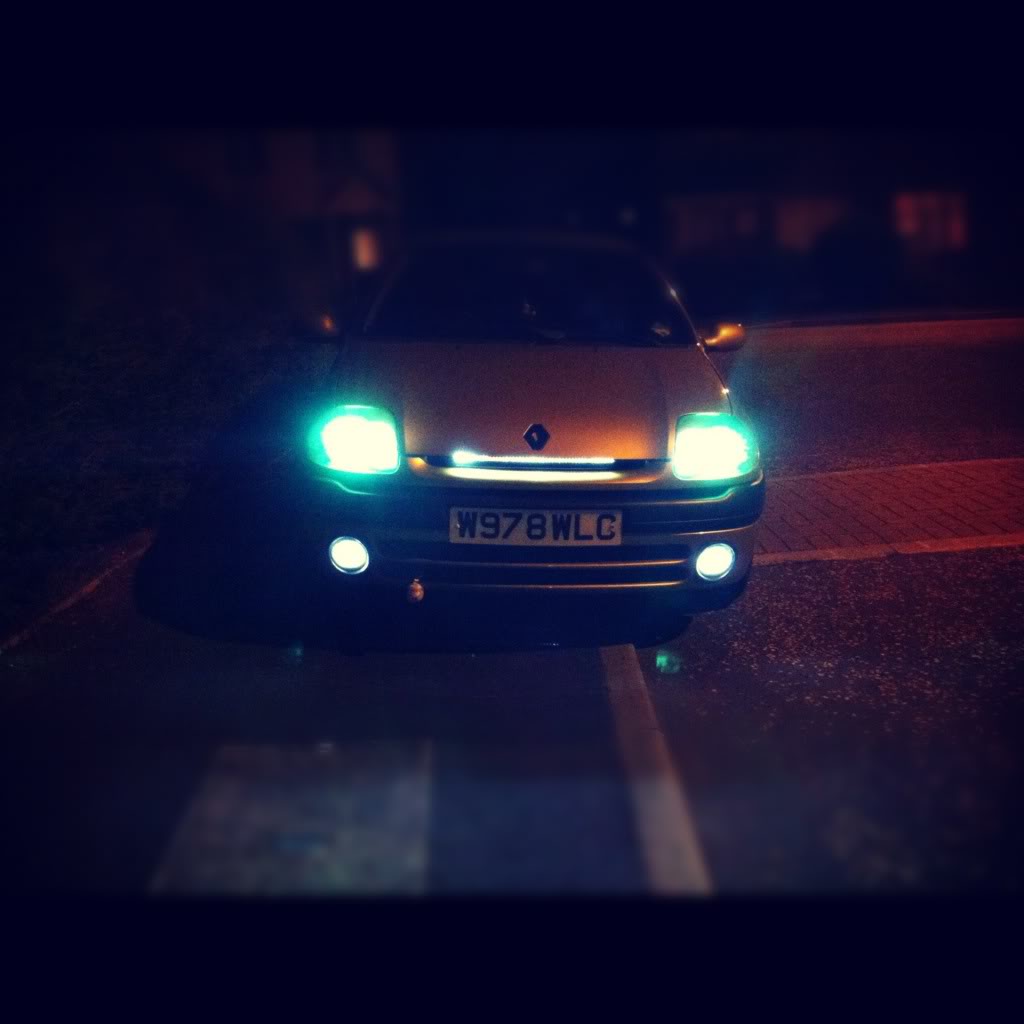 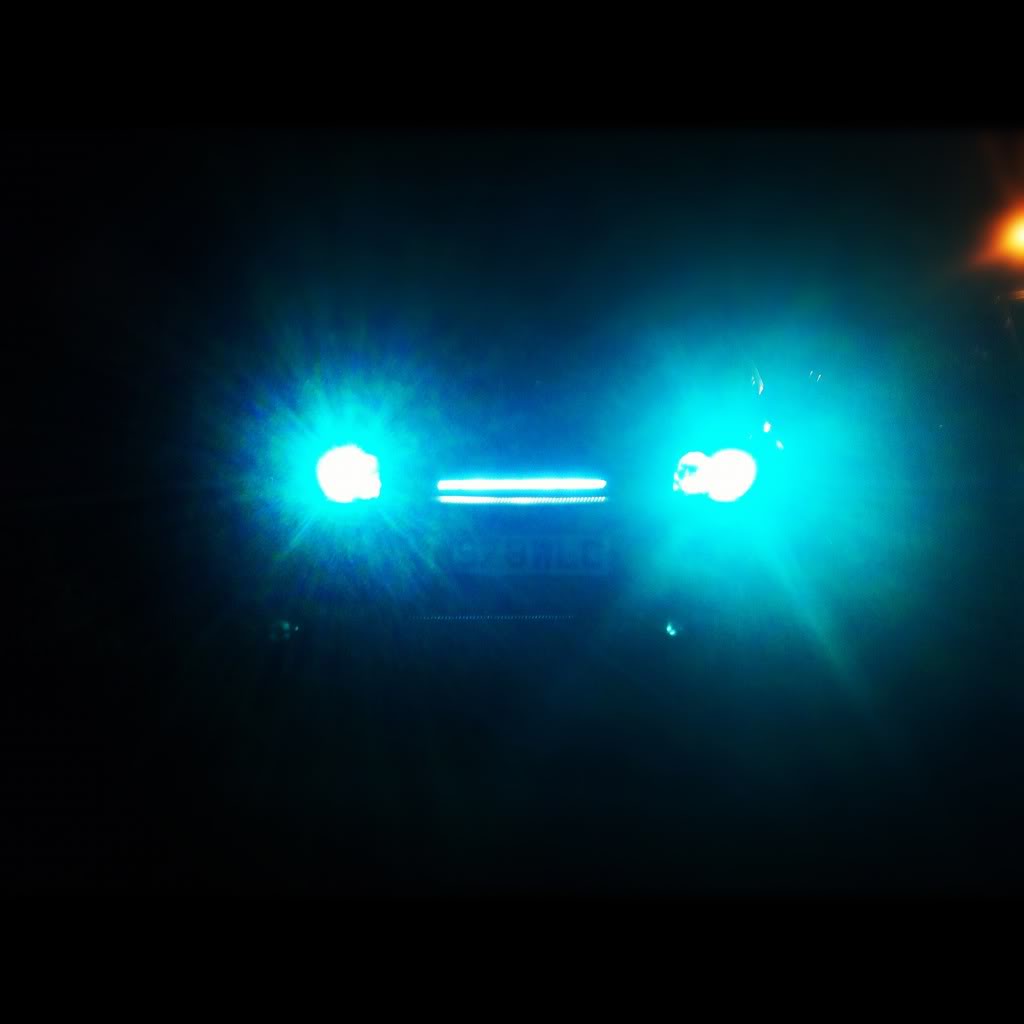 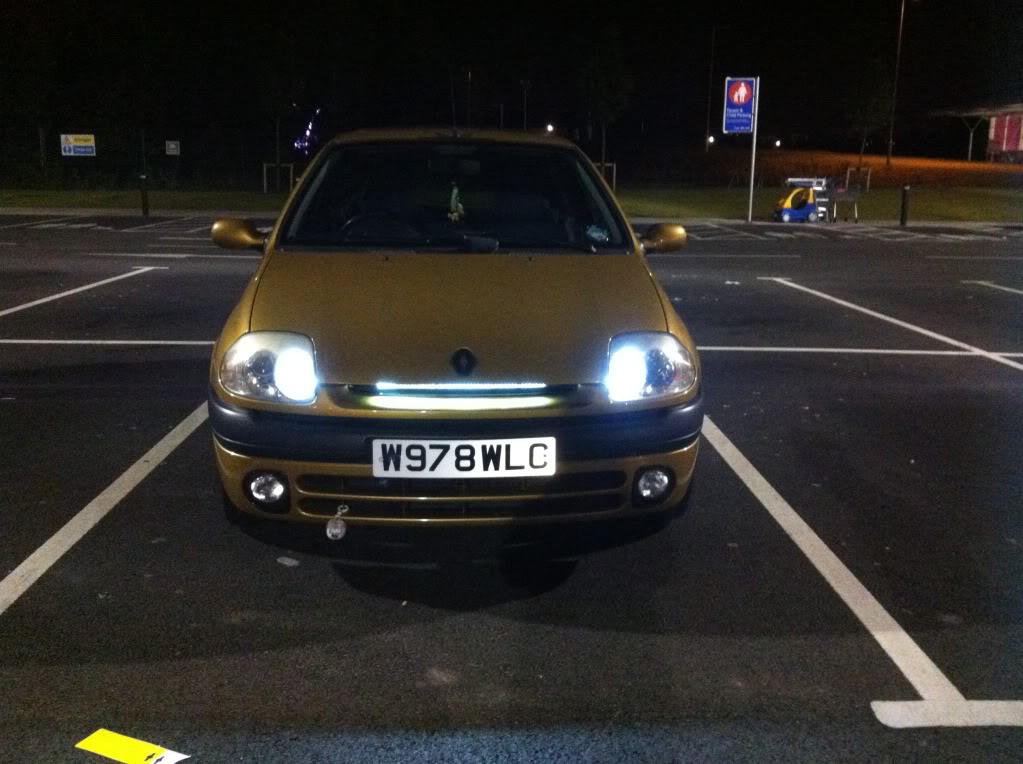 i think you all get the point haha

then got down to painting the bonnet badge, the grill and some side parts(havent got any pictures of the bumpstrips at the moment) 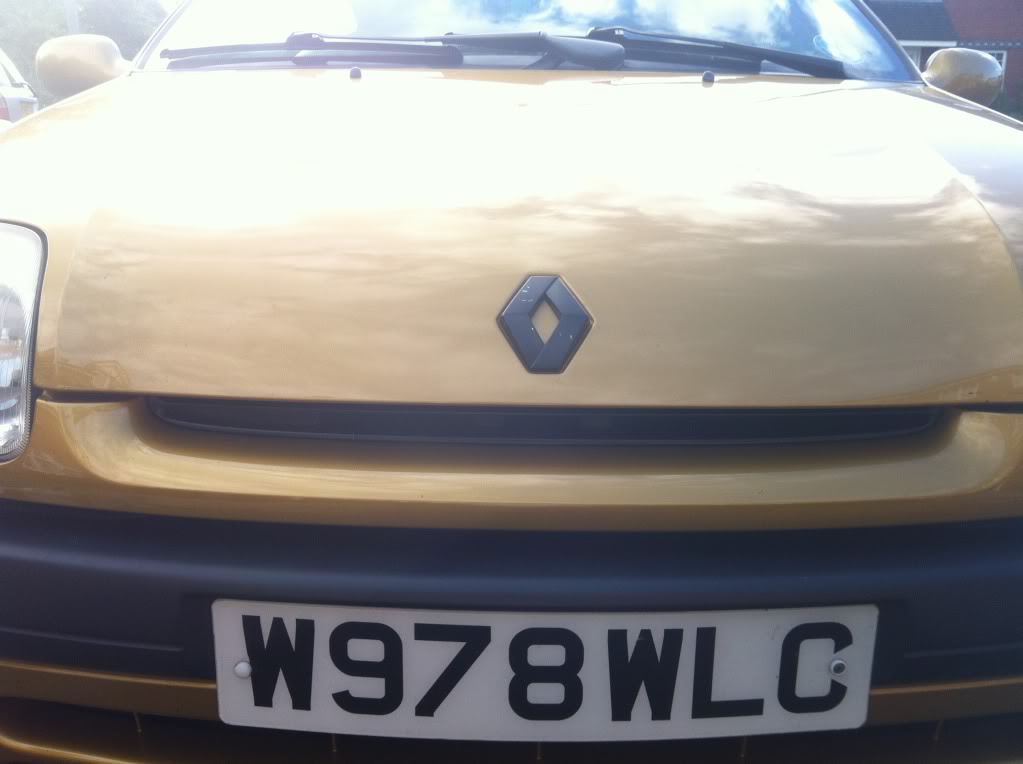 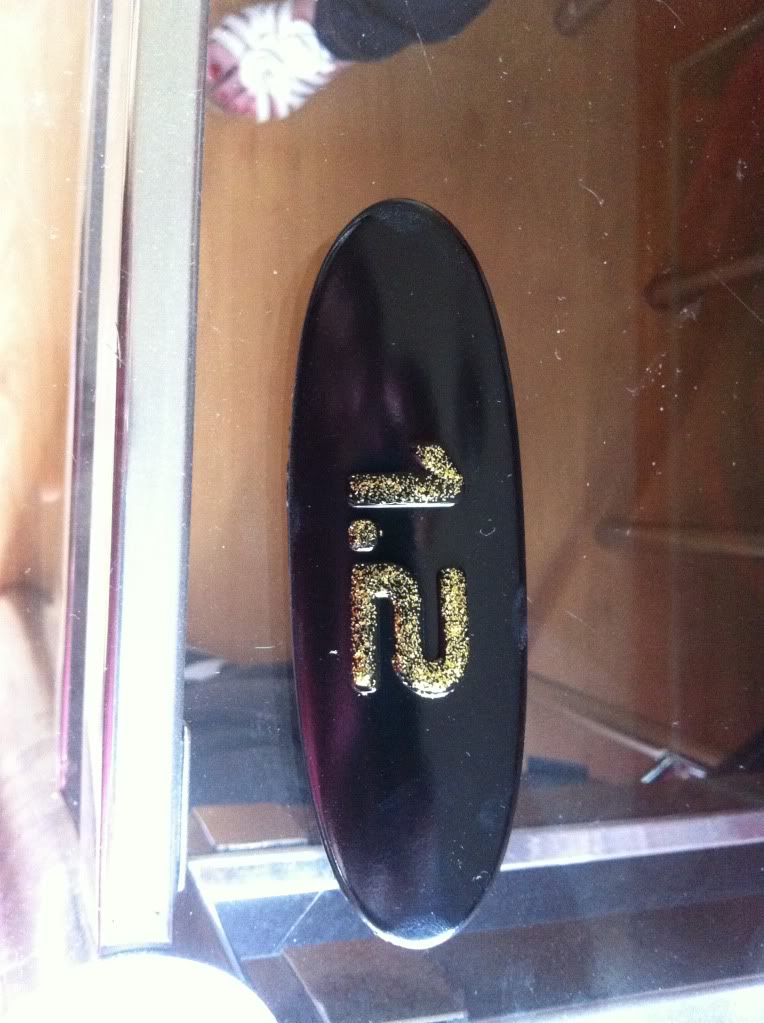 used the gold nail varnish to paint something else.. 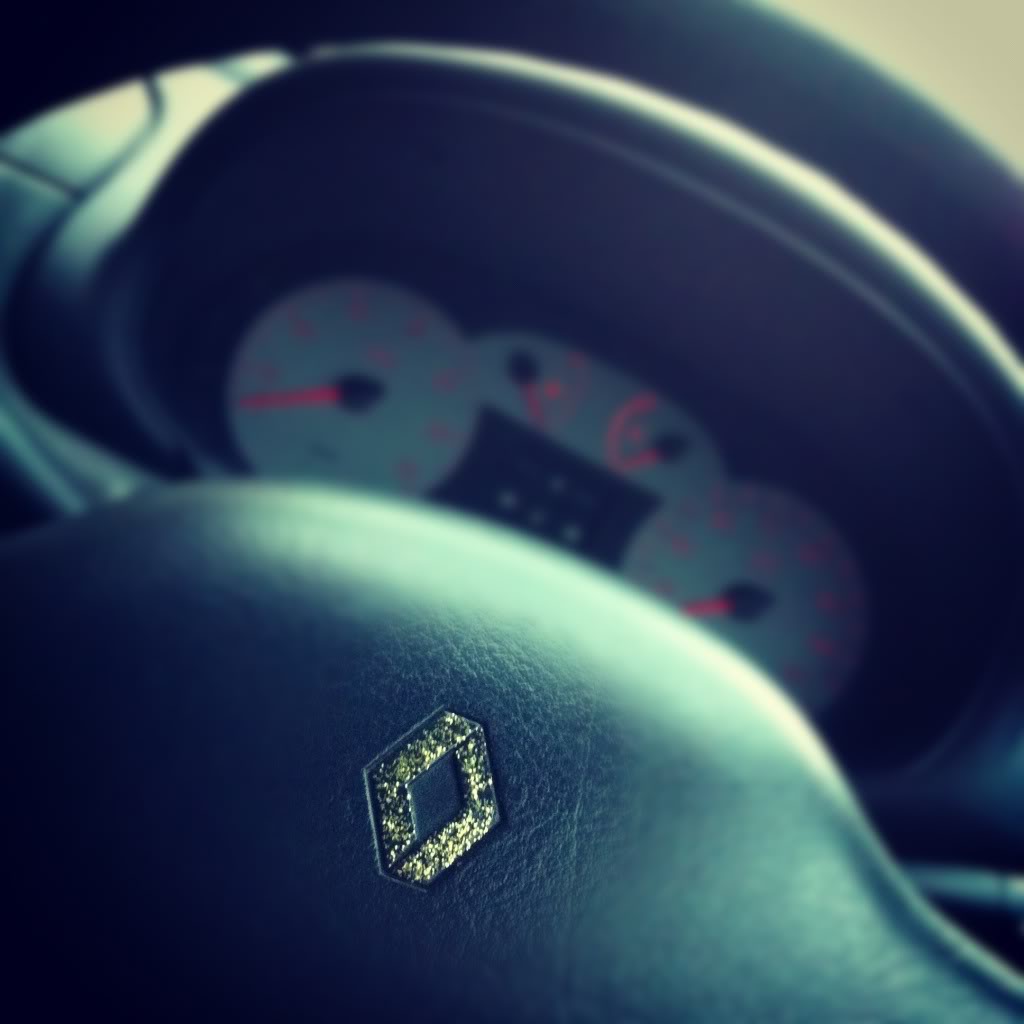 then got bored of my white smd sidelights and put some blue ones in.. he looks like hes got blue eyes! also on this photo the DRL has some leds out. Anyone know how to stop this? apparently its to do with the voltage the alternator puts out because its constanly goes up and down??:S 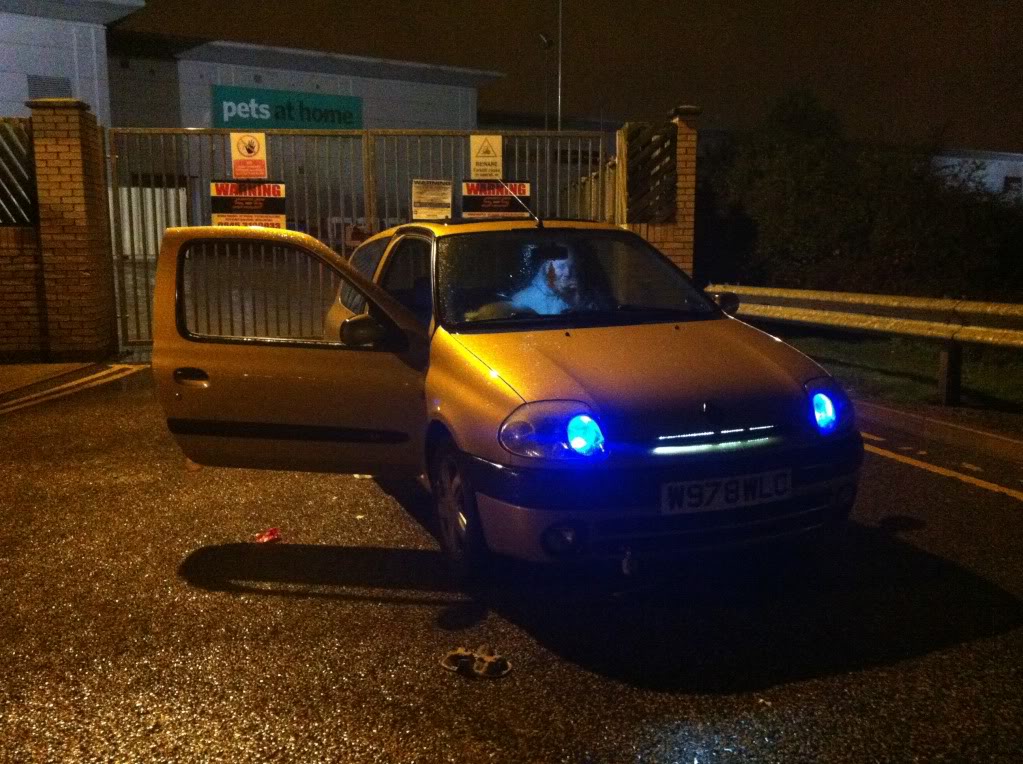 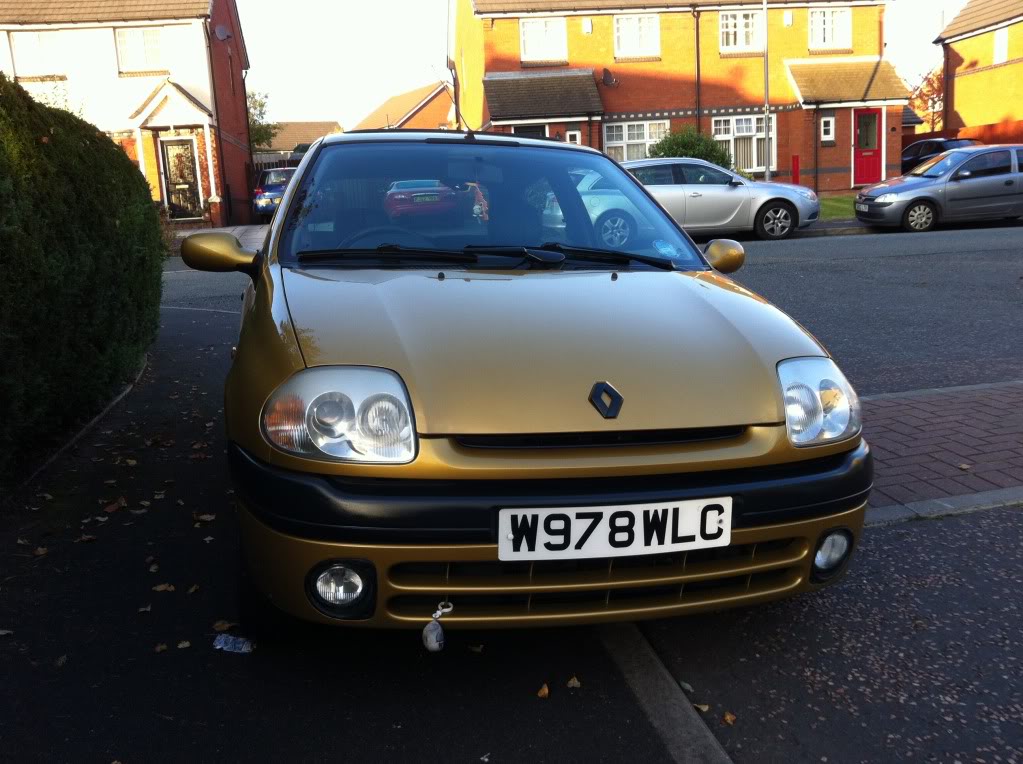 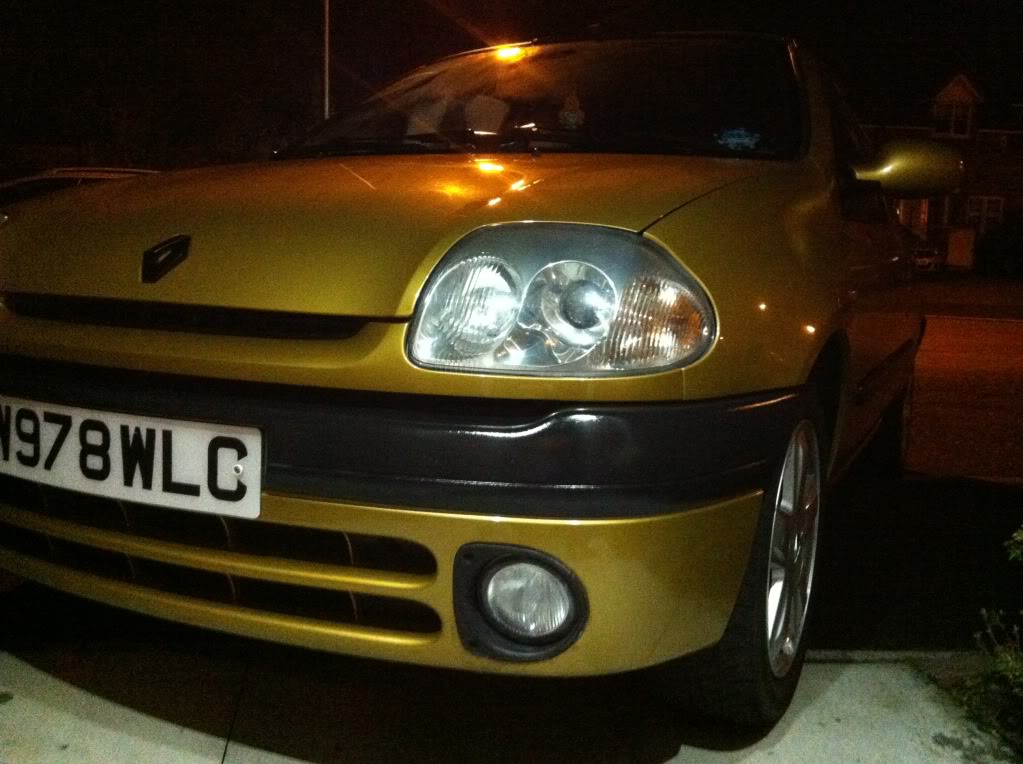 ''oiled'' the plastics - Have a look at Autofinesse Revive, or if you're commited, Gtechniq C4.
D

aucky said:
Sorry, but the DRLs and blue lamps make me sad.

''oiled'' the plastics - Have a look at Autofinesse Revive, or if you're commited, Gtechniq C4.
Click to expand...

I did say its not everyones cup of tea and ill probably end up changing the blue smd's .. the babyoil was just a quick fix, being sprayed gloss black soon!

If I were you you I'd think twice about painting. Paint will chip.

Check out the proper trim dressings above, looks classy and much cheaper than a spray job.

Clio MTV
Oh well, its my car im just experimenting at the moment.
Well i'll look into it, is it like Vinyl Wrapping?

ClioSport Club Member
7Rolf
Revive is a blackening trim dressing. It gives the perfect look but won't run down your paintwork like the oil/silicone based dressings do.

C4 is a semi-permenant solution. It gives the perfect look and will last at least 1 year+ if prepped and applied correctly.

Some people try to paint everything, but imo trim is there for a reason (not just the cost saving). The contrast vs black plastic works! However, environmental conditions do their best to stop it being black.

Clio MTV
Thanks for that. May look into buying a bottle of the Revive Trim dressing, but that GTechnig C4 looks awesome! But i want the trims much darker :S

ClioSport Club Member
7Rolf
Yeah, although you never need to touch C4 after applying it, I've seen a few people who actually prefer to freshly apply Revive for the finish.

Have a search round, just an idea.

ClioSport Club Member
Black Gold 182FF
I would definitely swap back to your original sidelights, if they are true blue like the ones you have now your just going to attract unwanted attention. They don't look good either in my opinion :dapprove:

You should totally get some ph2 side strips, one of the best additions I've ever made to my car!
D

Clio MTV
Update.. Took your advice and removed my DRL and swapped my blue side lights to my white ones, i do like it better now looks cleaner on the outside and not as 'chavvy'
next thing im wanting to do is a boot build, not a massive one with screens and all that, just a false floor one
Last edited: Oct 28, 2012

Clio MTV
Hi All! not update in a while! well here its goes...

Got rid of the Clio Alloys and got some of these... 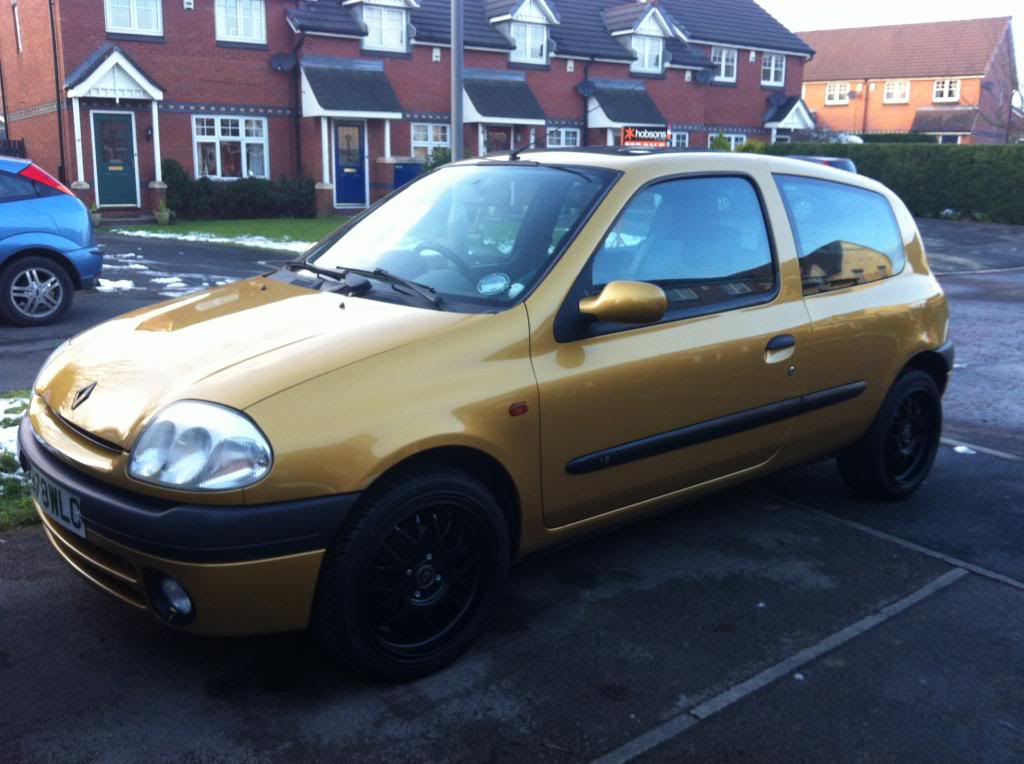 and this sebring exhaust (brand new may i add for £41) 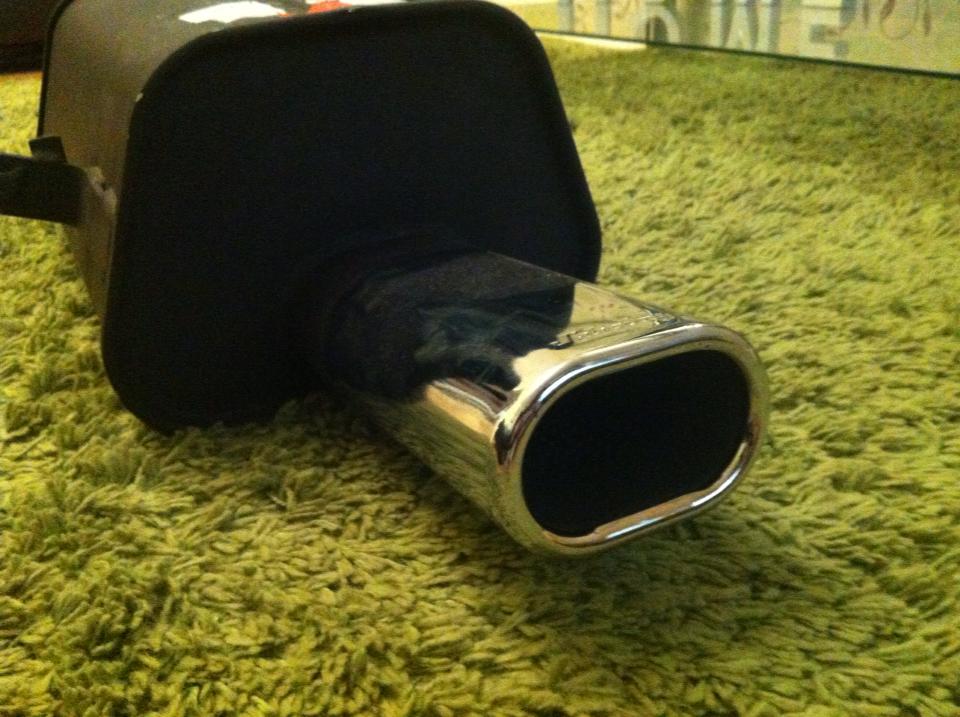 got some 50mm lowering springs aswell, just need them fitting

Clio MTV
Whats up with you!
these forums are full of the same kinda people!!
never say anything nice to be honest!
if you don't like it. dont comment! END OF.
D

R33 Skyline
lower it, bin the exhaust, leave it.
G

Clio MK2
I love the blue lights! ahah, I may have to get some myself, Also, The car looks great! Nice work with it

How much did you get your bulbs for did you say? and the wiring for the fogs lights.. is it hard? I want some but never actually got round to it, Thought it might be a bit too much work, But when I fitted my LEDs to my interior it was easy, With the switch as well.. Anything like this?

Keep the good work up
D

Clio MTV
Hey Everyone! I'm Back! ...
As you have seen i got the exhaust on, and the new wheels. I ended the thread at that because non of you lot liked it! But i carried on doing what i was doing to the car regardless
Here you go..
"Haters Gonna Hate. Potatoes Gonna Potate" 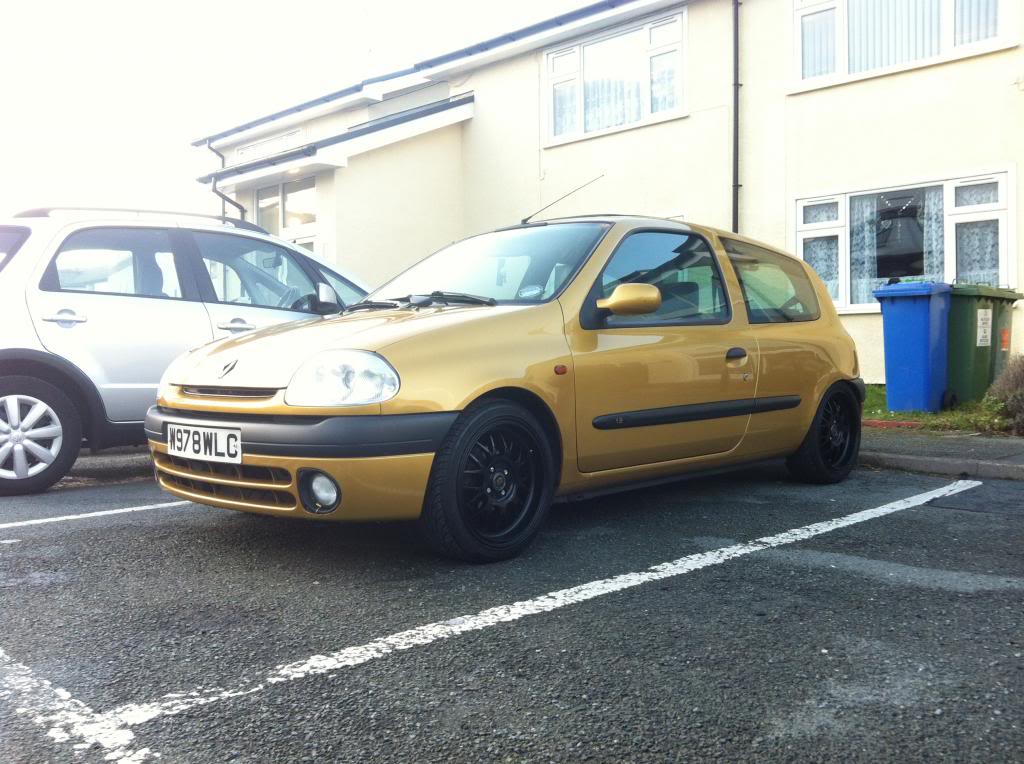 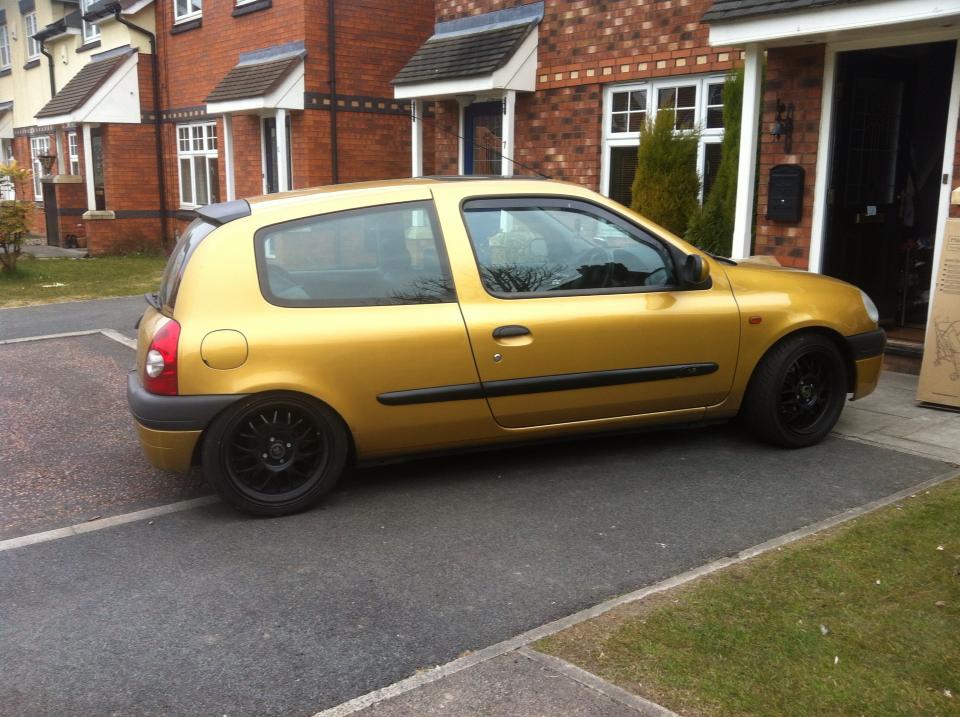 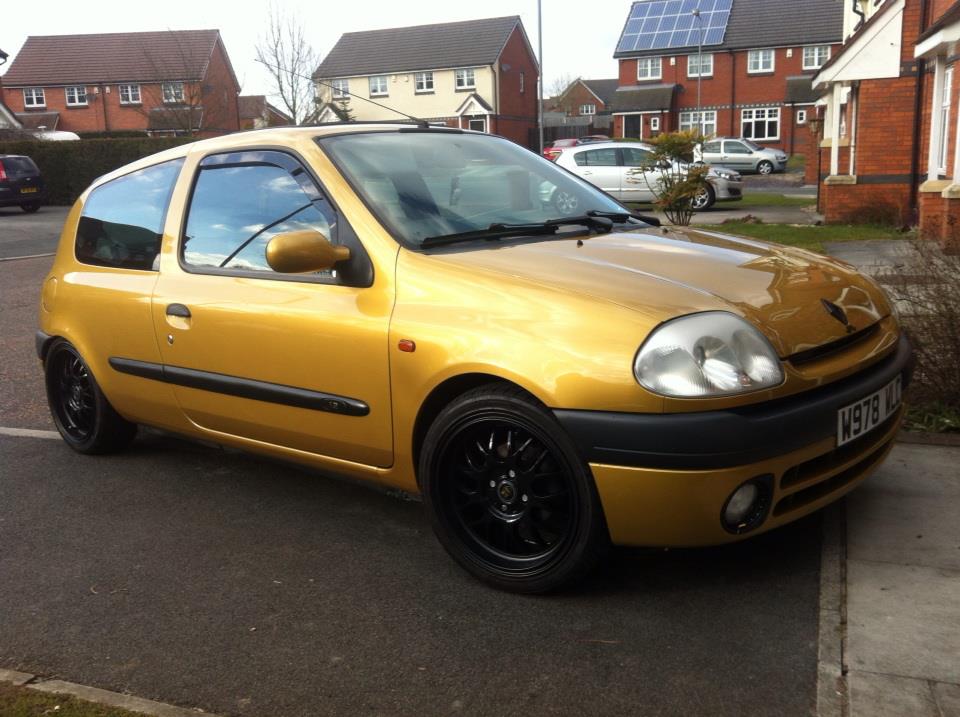