ClioSport Club Member
Clio 182FF titanium
Well couple of weeks since last update. Car is now back together properly and on its wheels.
I replaced the rear brake pads with a new pair of Brembo’s as the set on the car were pretty grotty. 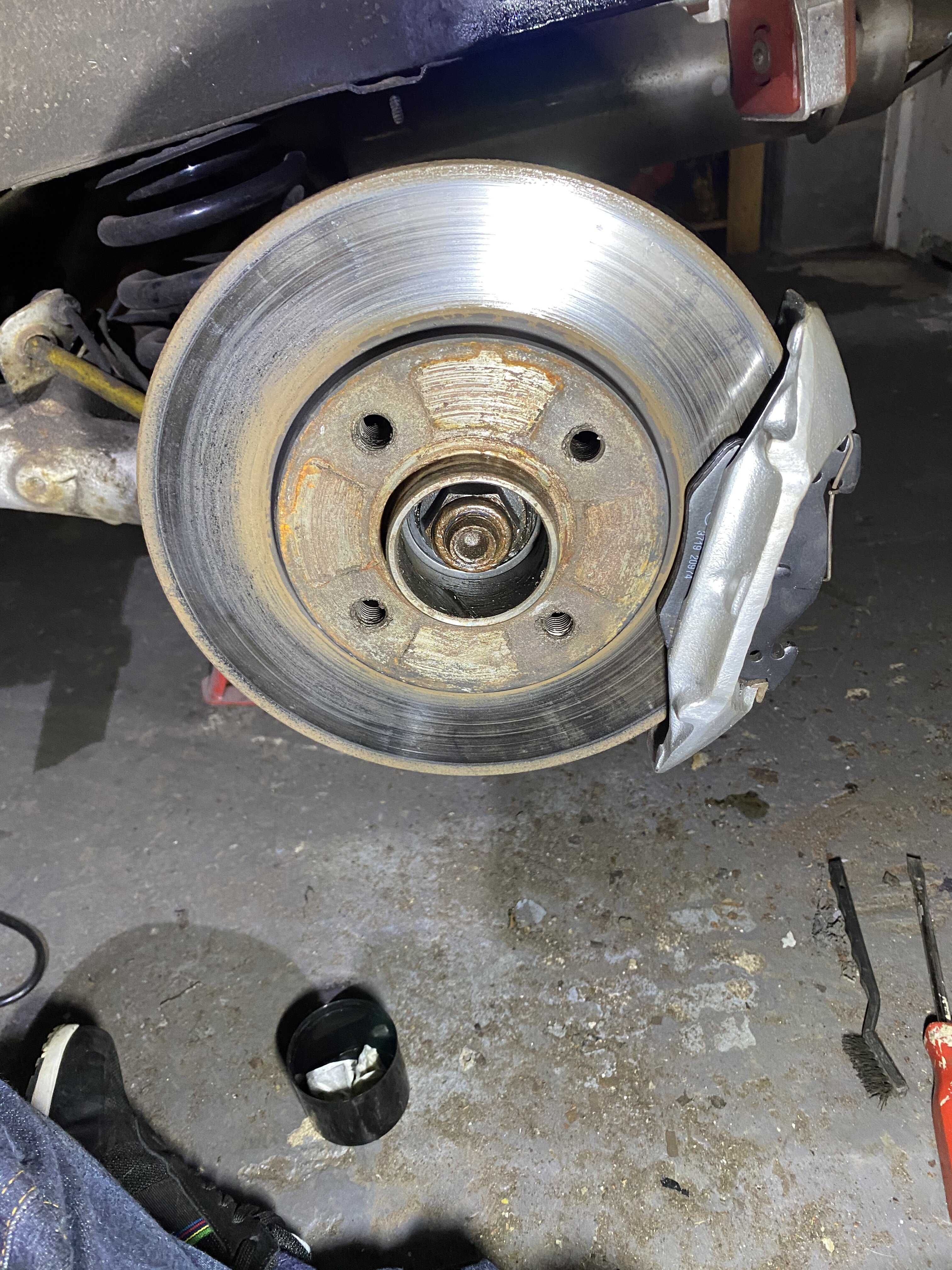 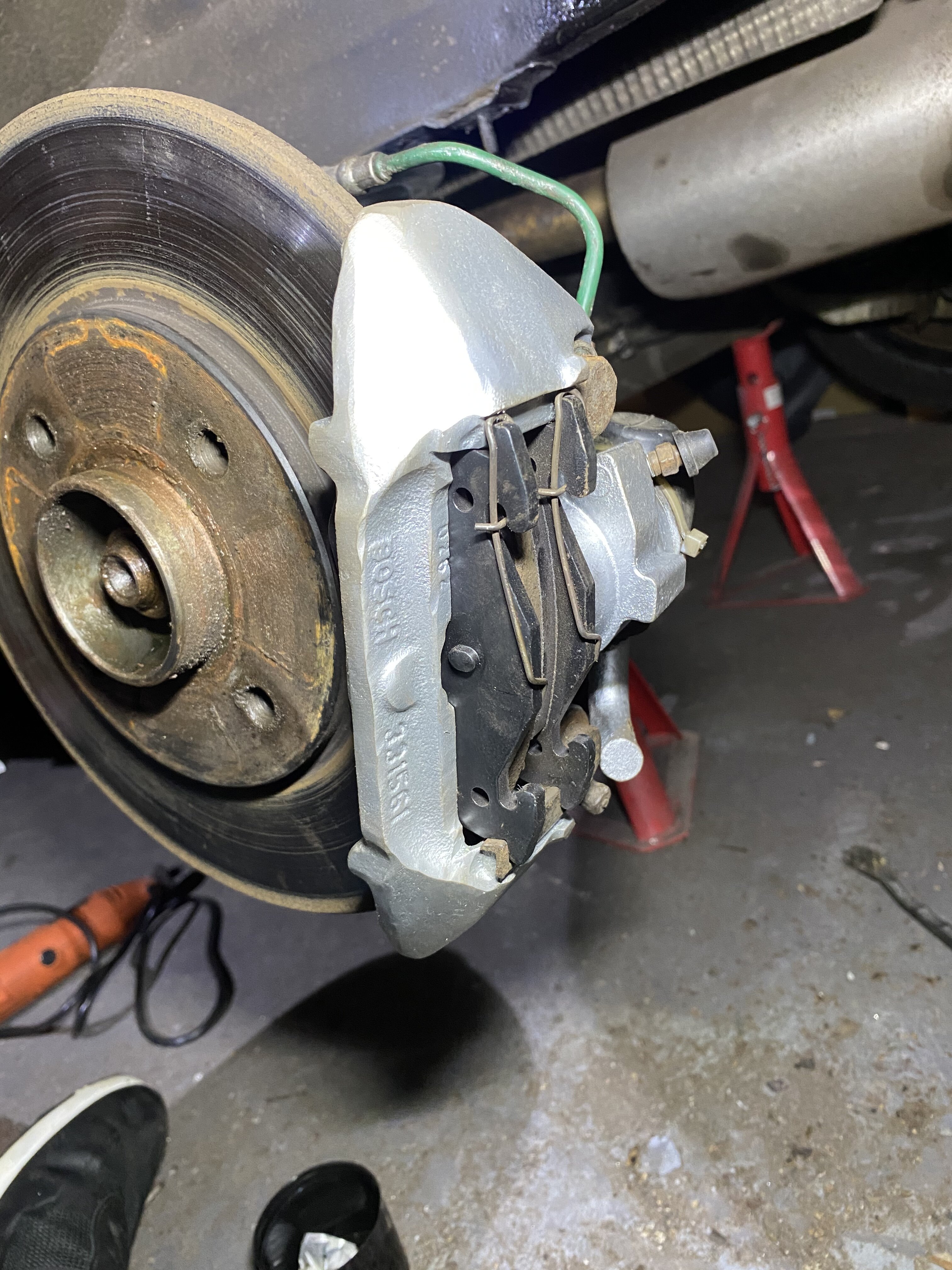 Over the last week I decided to make use of some off cuts of carbon fibre I nabbed off a mate. I have done a bit of carbon layup over the years, so decided to have a go at making my own carbon skinned fog light surrounds. I didn’t want to ruin the frankly minty set that were on the car so set about finding some spares. My usual parts buying frenzy meant I have 3 bloody sets of the things now! So if anyone needs a mint set of surrounds let me know!! Moron!

Started up by using alcohol to remove all the years of silicone and bumper black. Then rubbing the plastic down with a heavy grade sand paper to provide a key. I then filled some of the indents and gouges with plastic padding before rubbing the surrounds down again. A quick blast with black bumper paint (so the filler or faded plastic wouldn’t flash through the carbon weave) we were then ready to skin them. 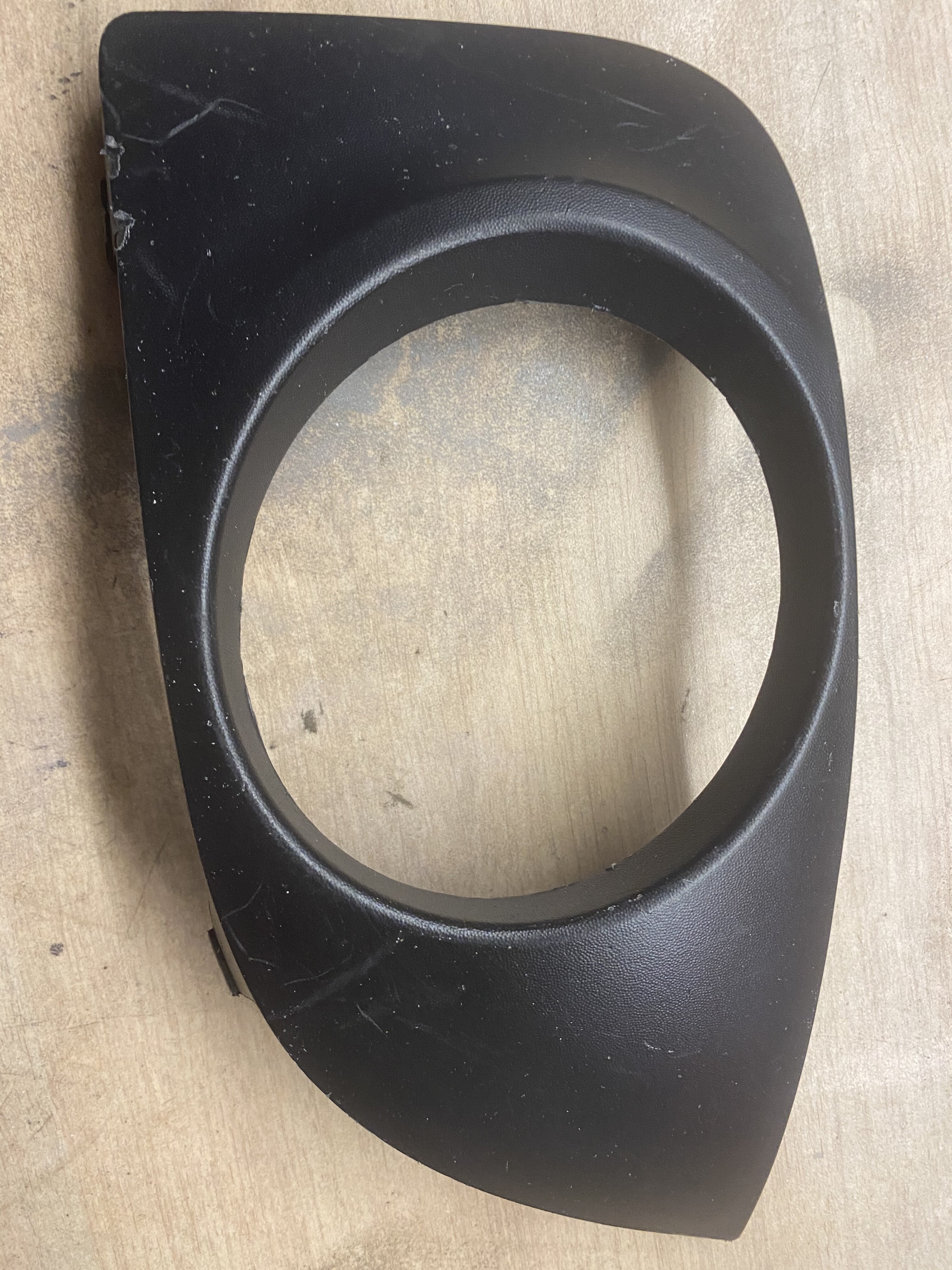 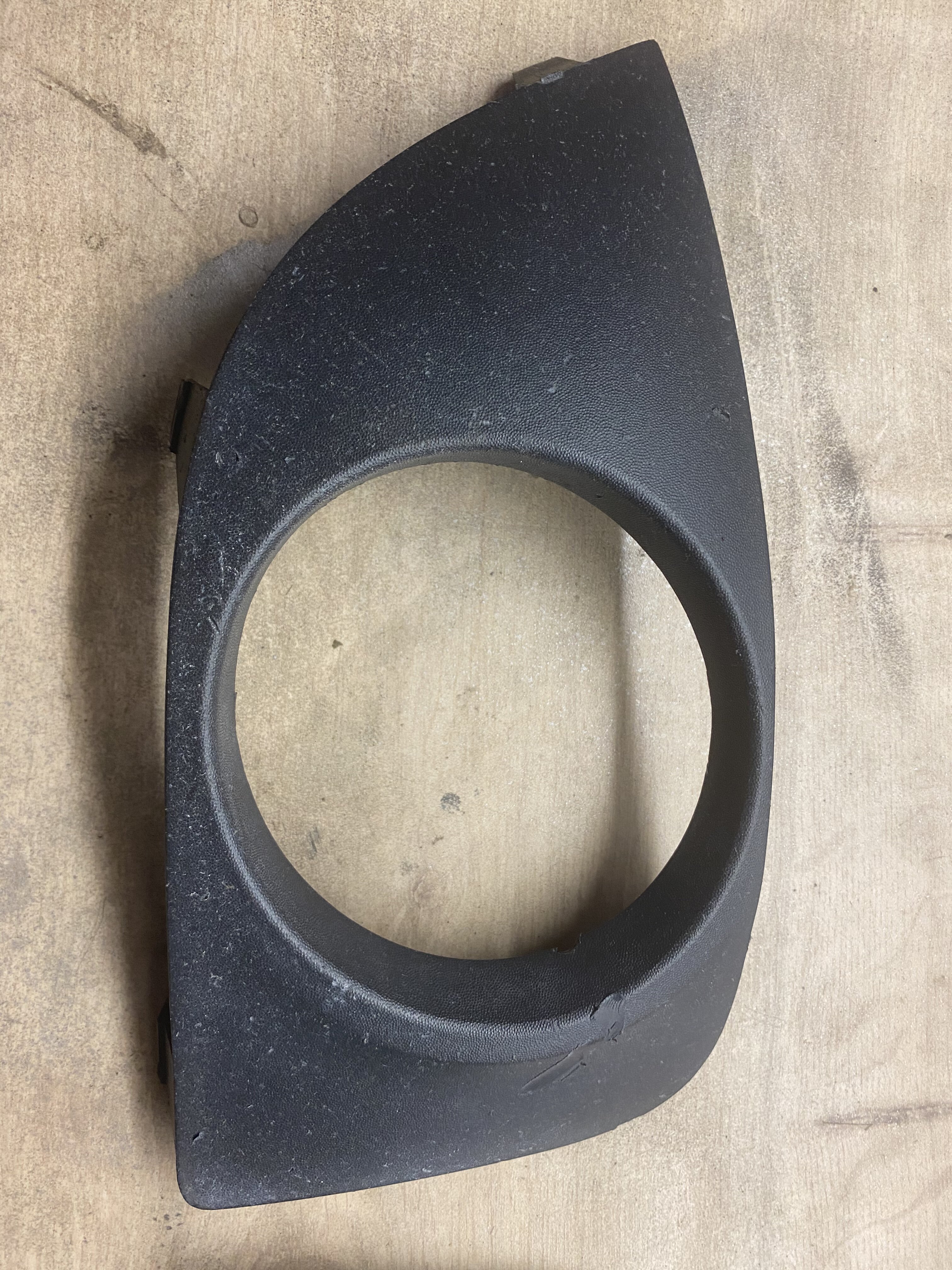 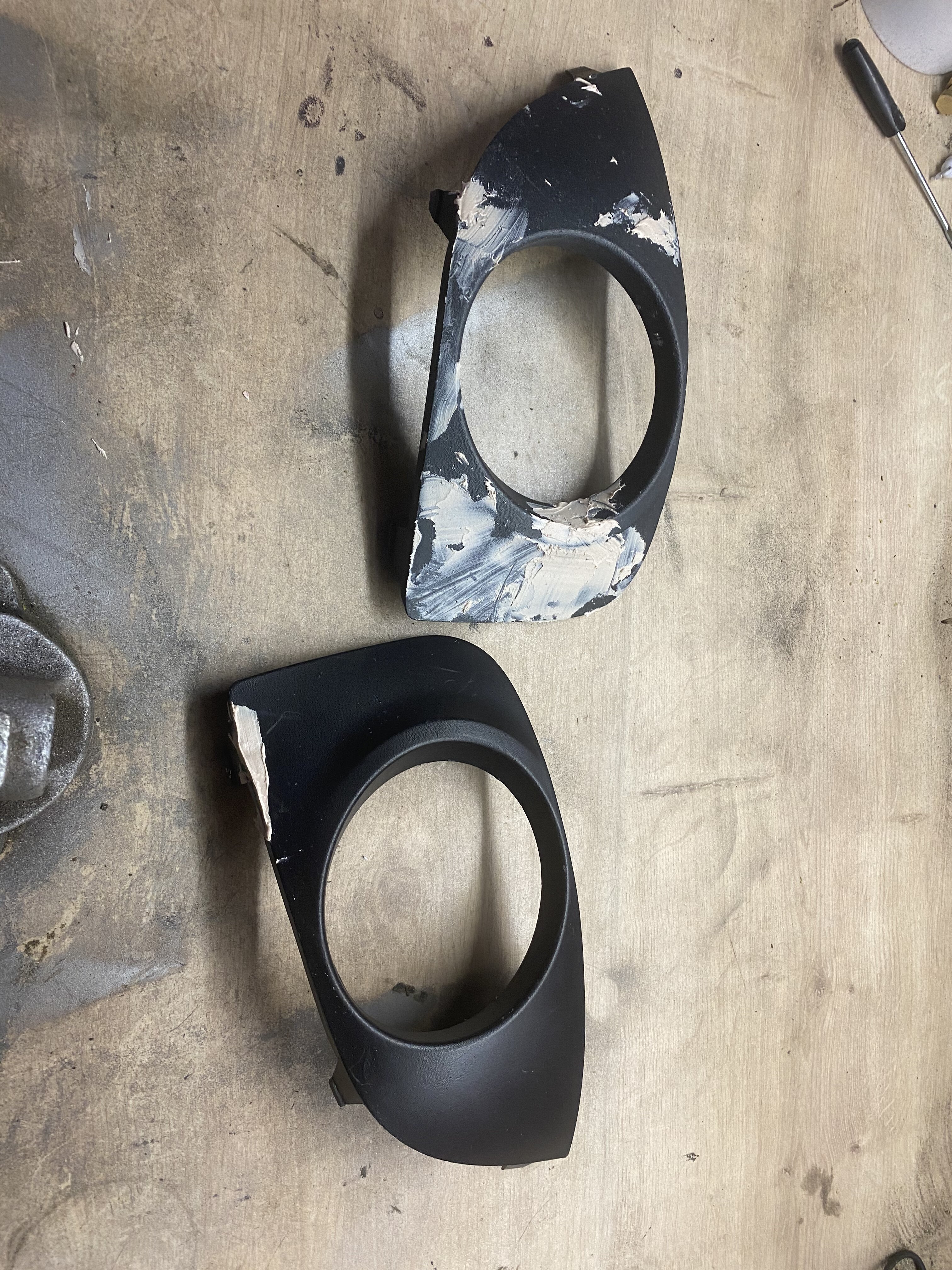 laid down an epoxy base coat and then the carbon fibre before setting out with more epoxy. I had some Peel ply to hand but actually didn’t bother. Left then for 24hrs to set. Once set I laid another epoxy coat to fill the voids made from the epoxy soaking into the cloth. 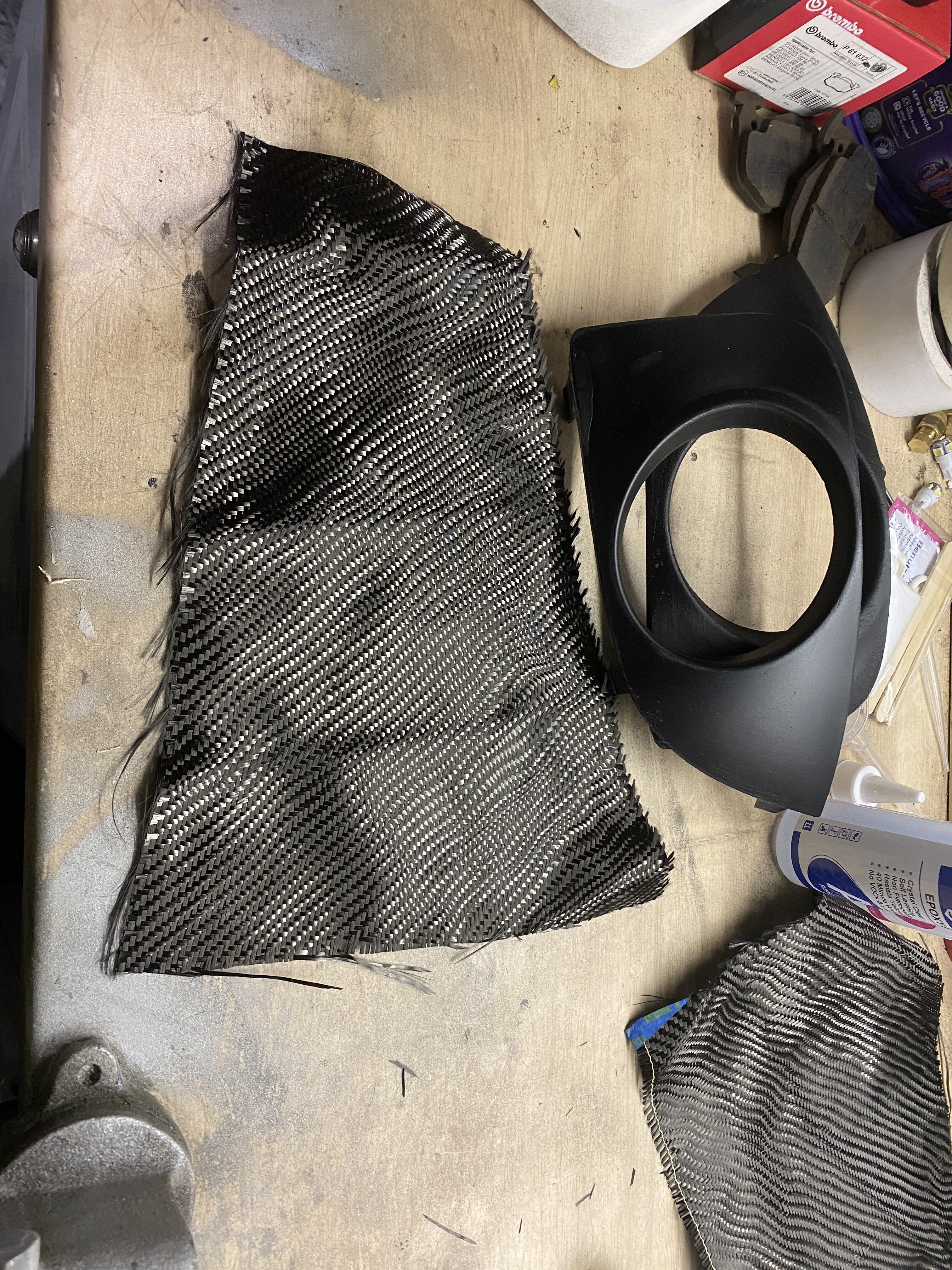 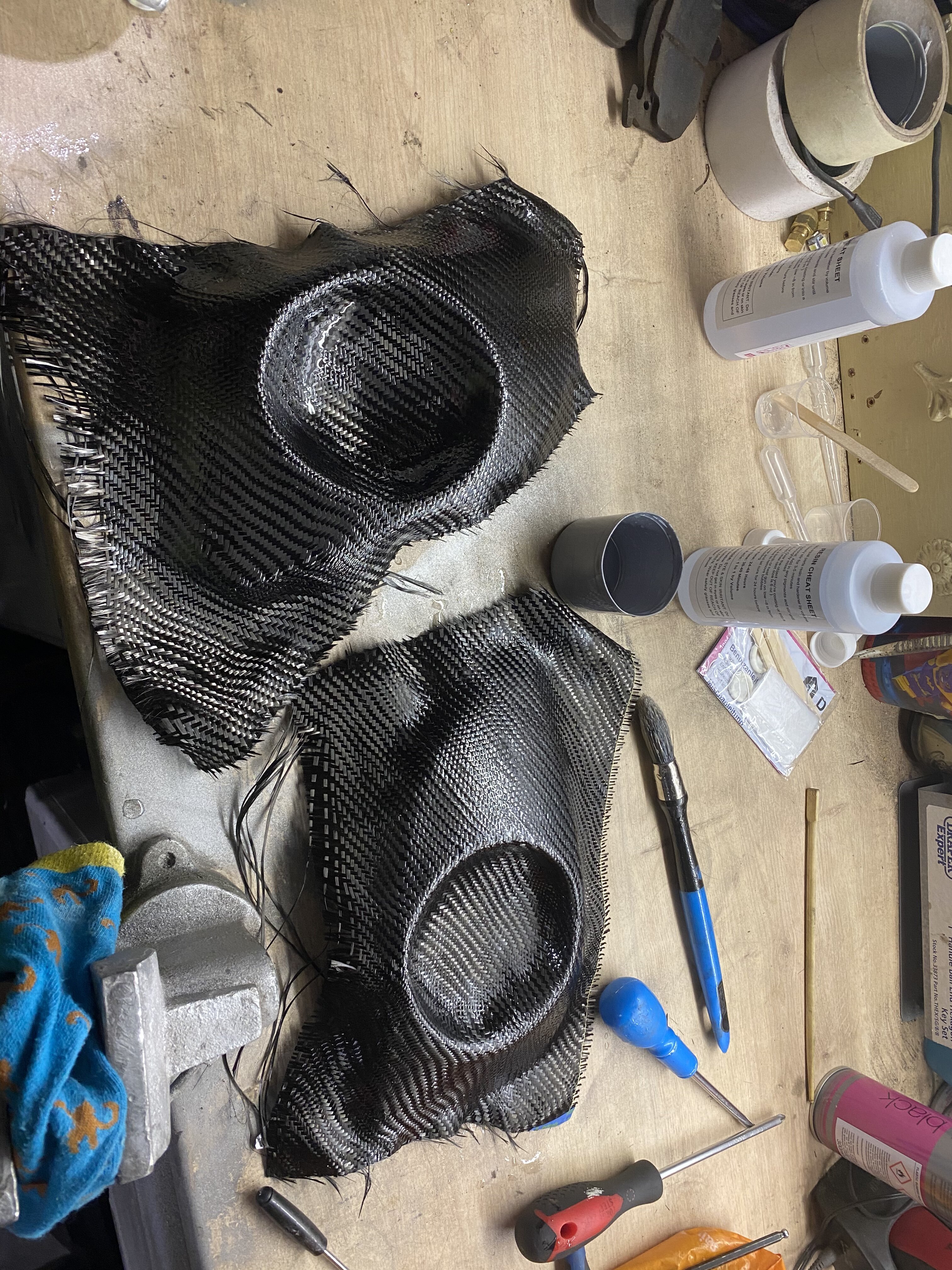 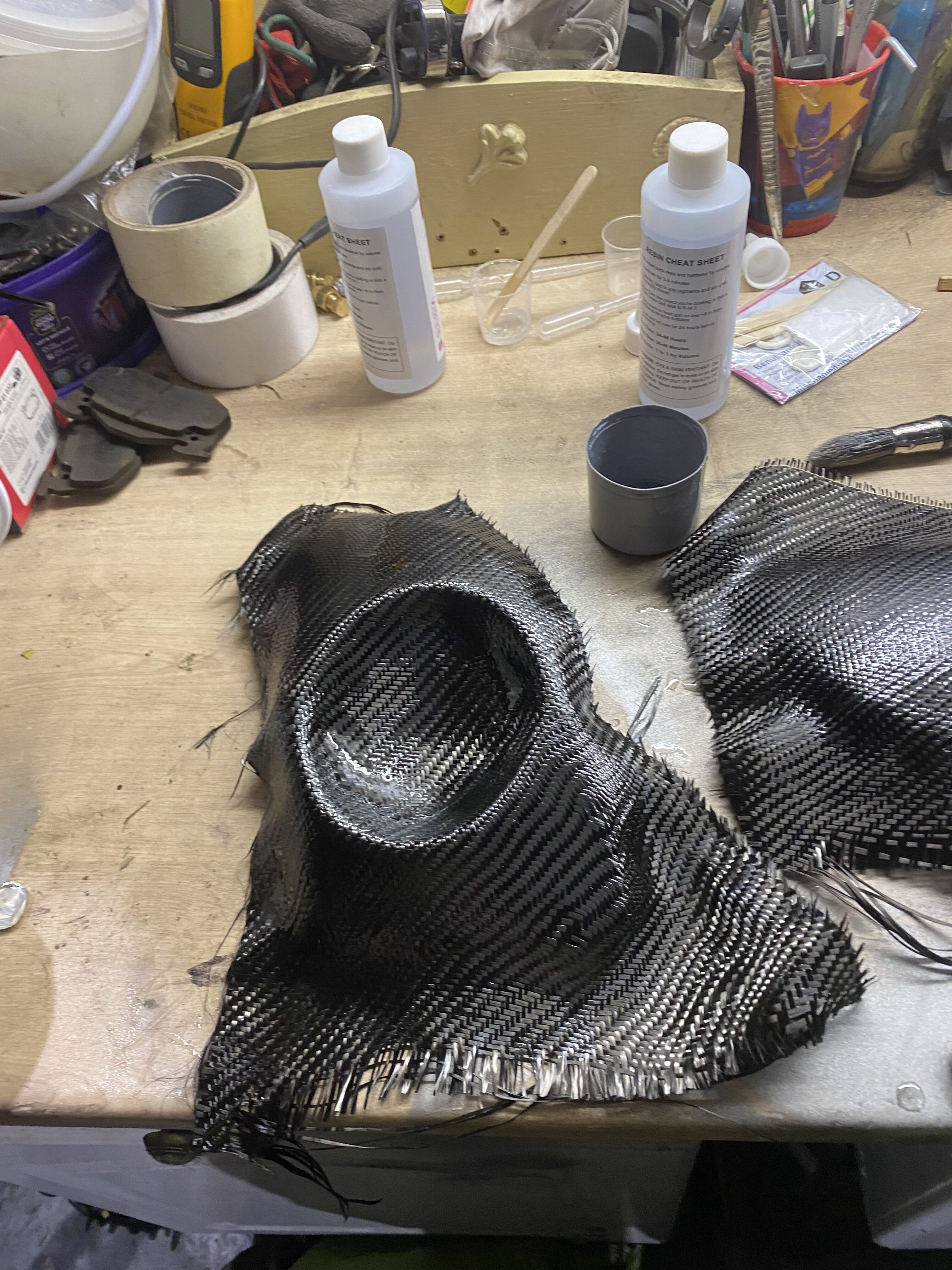 ClioSport Club Member
Clio 182FF titanium
Another 24 hours last and now the real works starts. I cleaned up the unwanted cloth with a dremel and then flatted the whole surface back so it was smooth. At this point a final coat of epoxy is applied....another 24hrs past and it was time to finish them off.View attachment 1522629 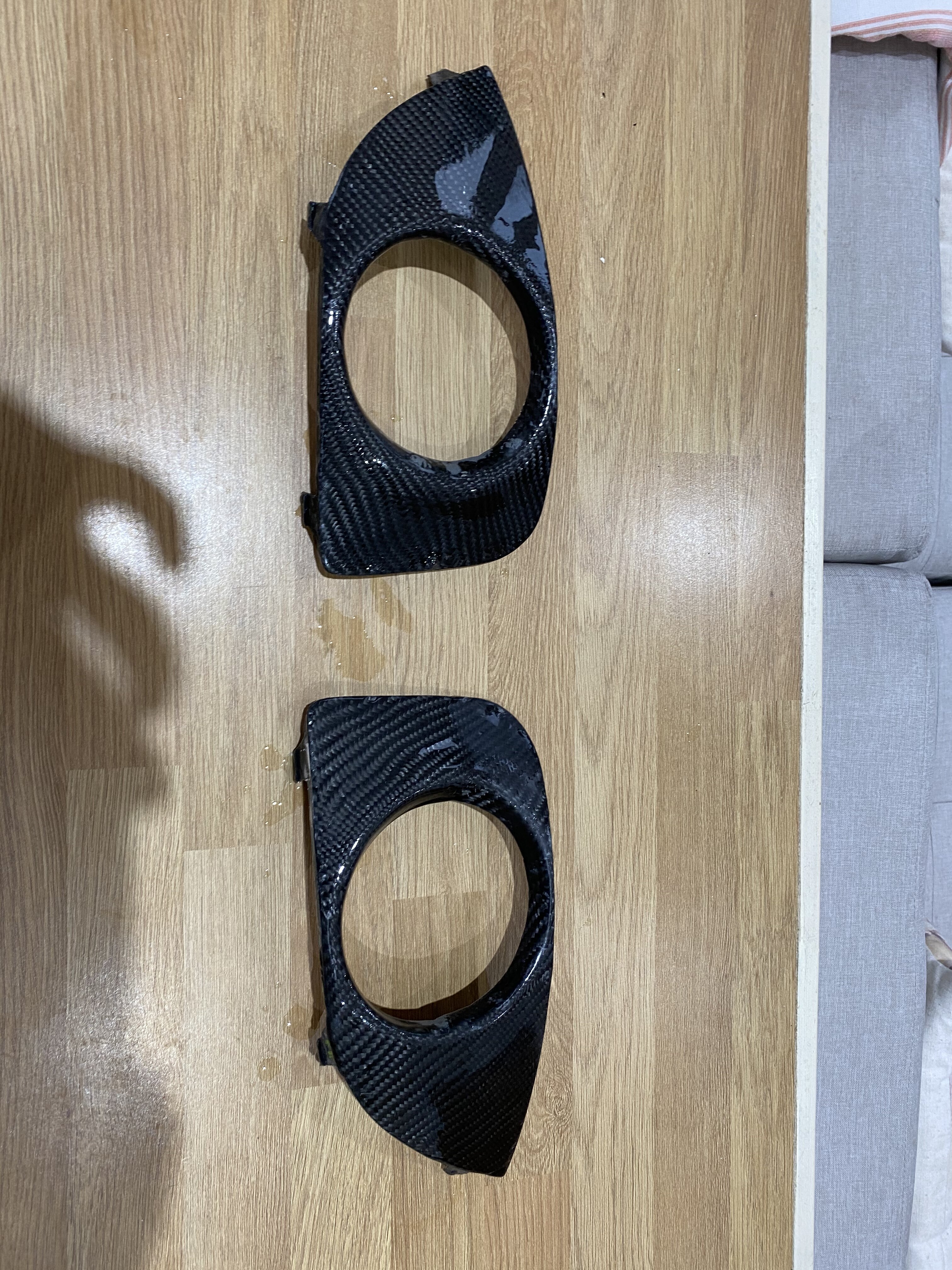 
So flatted back the epoxy clear coat again and then shot the surrounds with clear lacquer. The reason I do this is epoxy isn’t great at handling UV, regardless of the UV stabilising claims. 2 coats of lacquer and I could flat back through the various grades of wet and dry before polishing up. 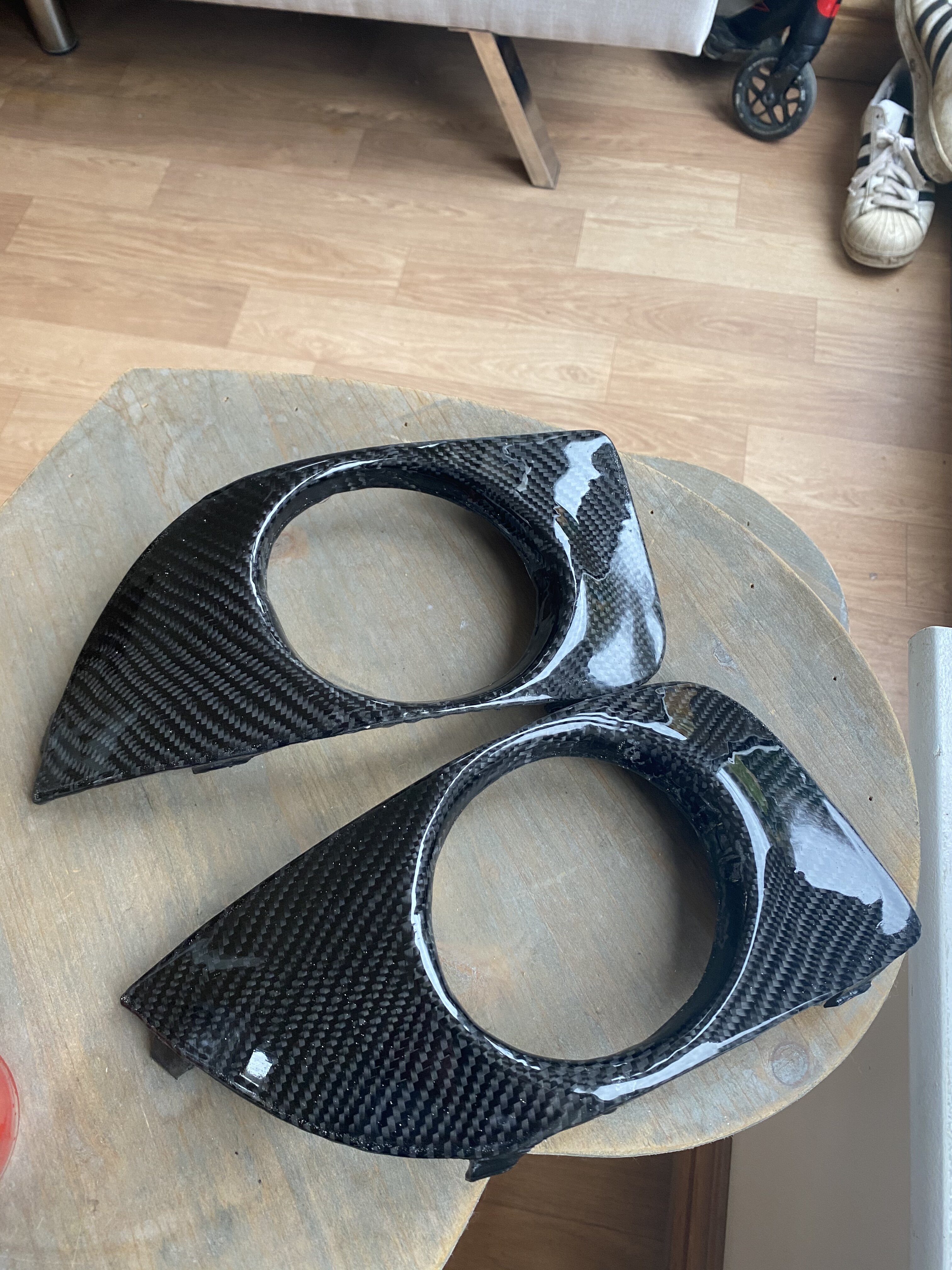 Popped the old surrounds out earlier today, gave the area a good clean up as it was minging back there 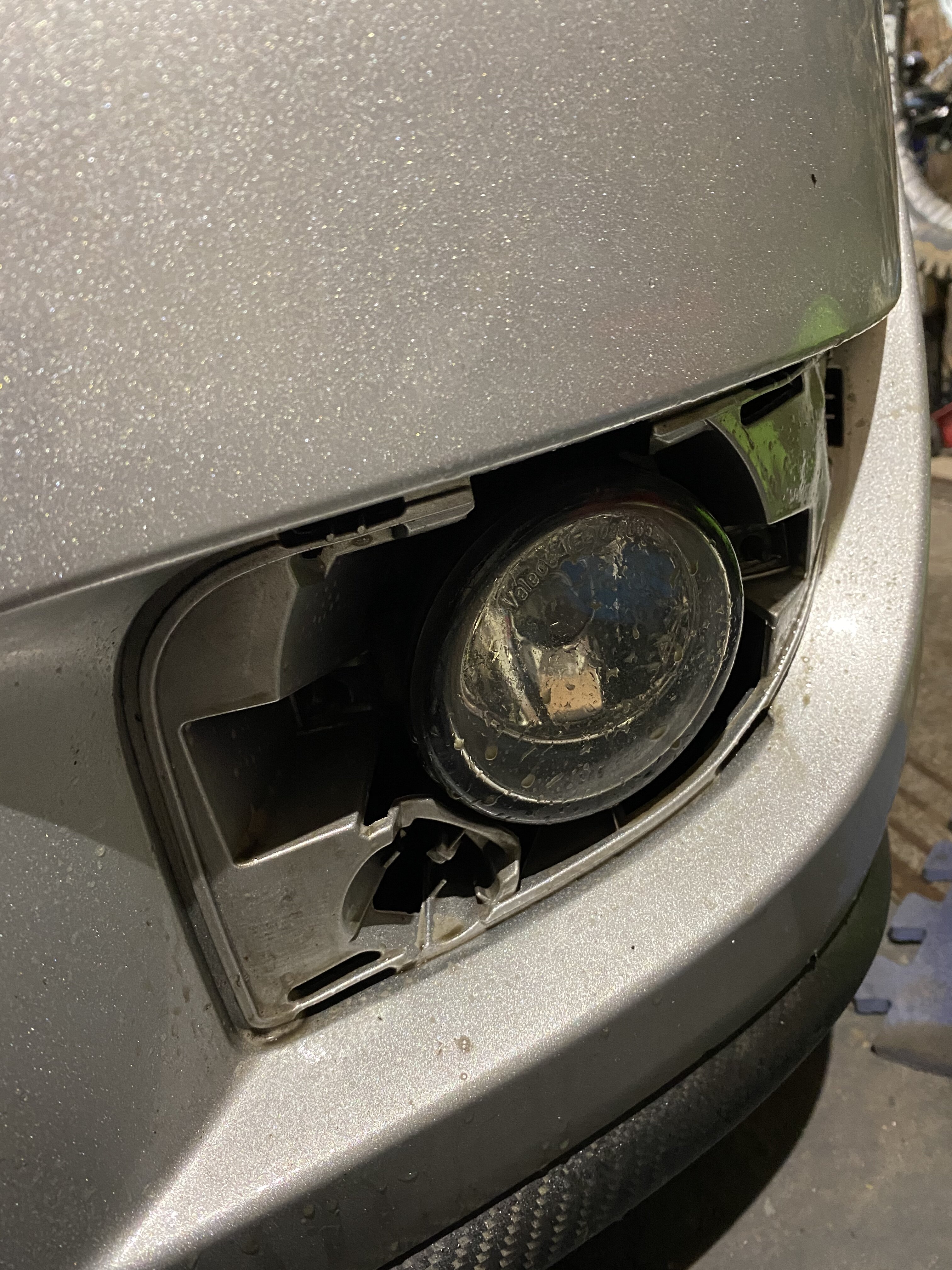 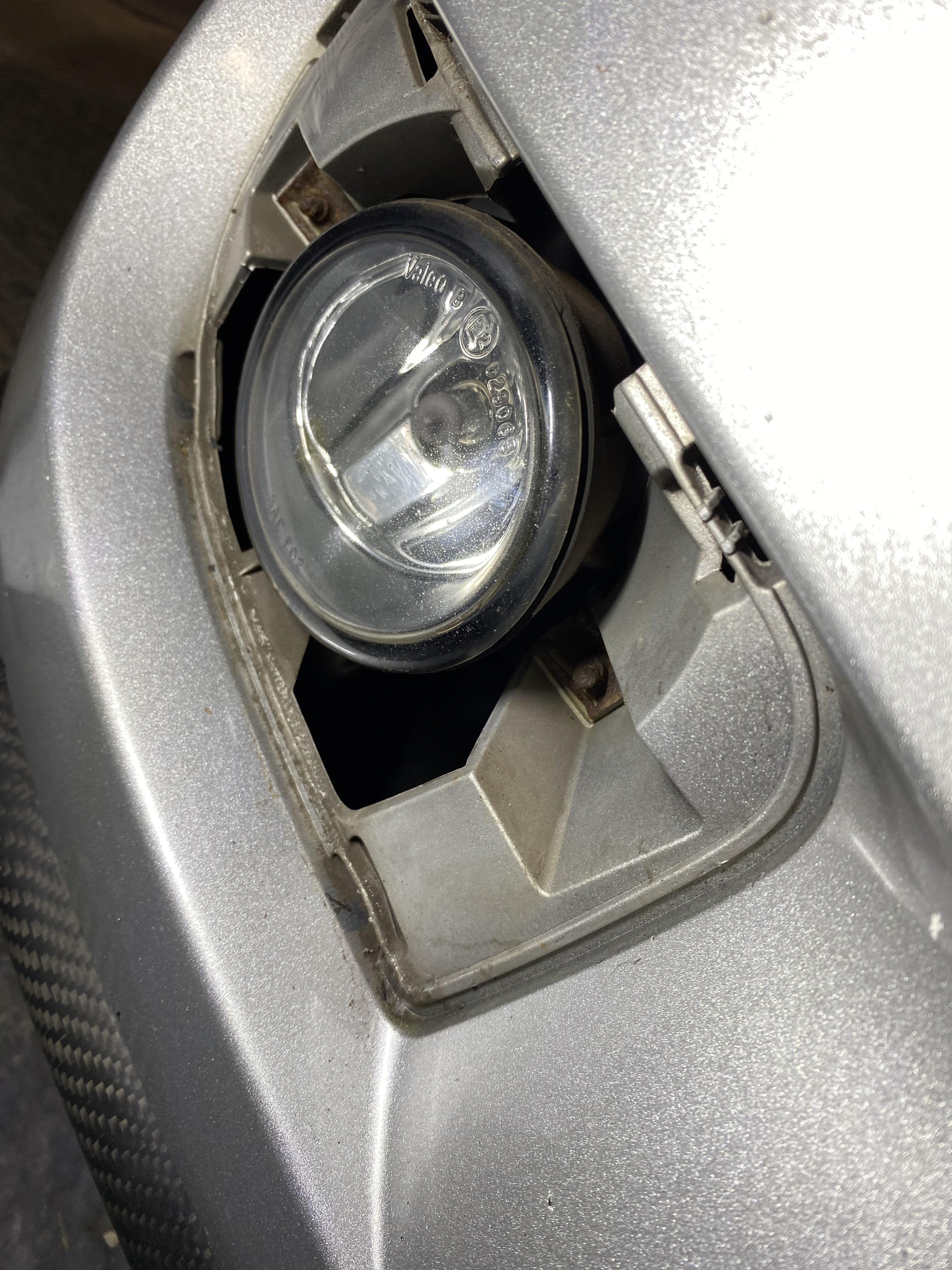 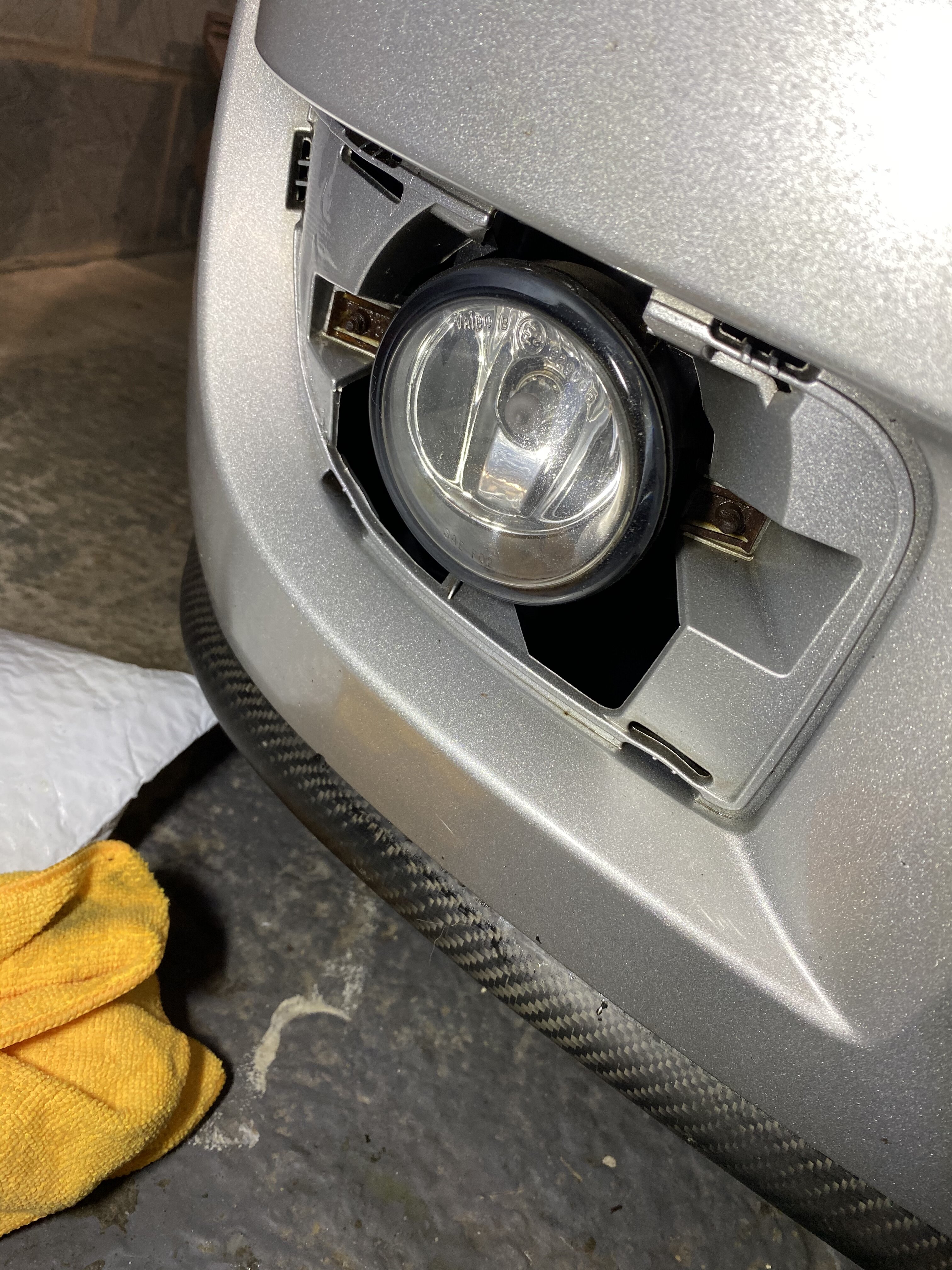 ClioSport Club Member
Clio 182FF titanium
Fitted them today and I have to say I’m happy with the results, not perfect but pretty good and works well with my washer blanks and splitter (which needs clear coating again) 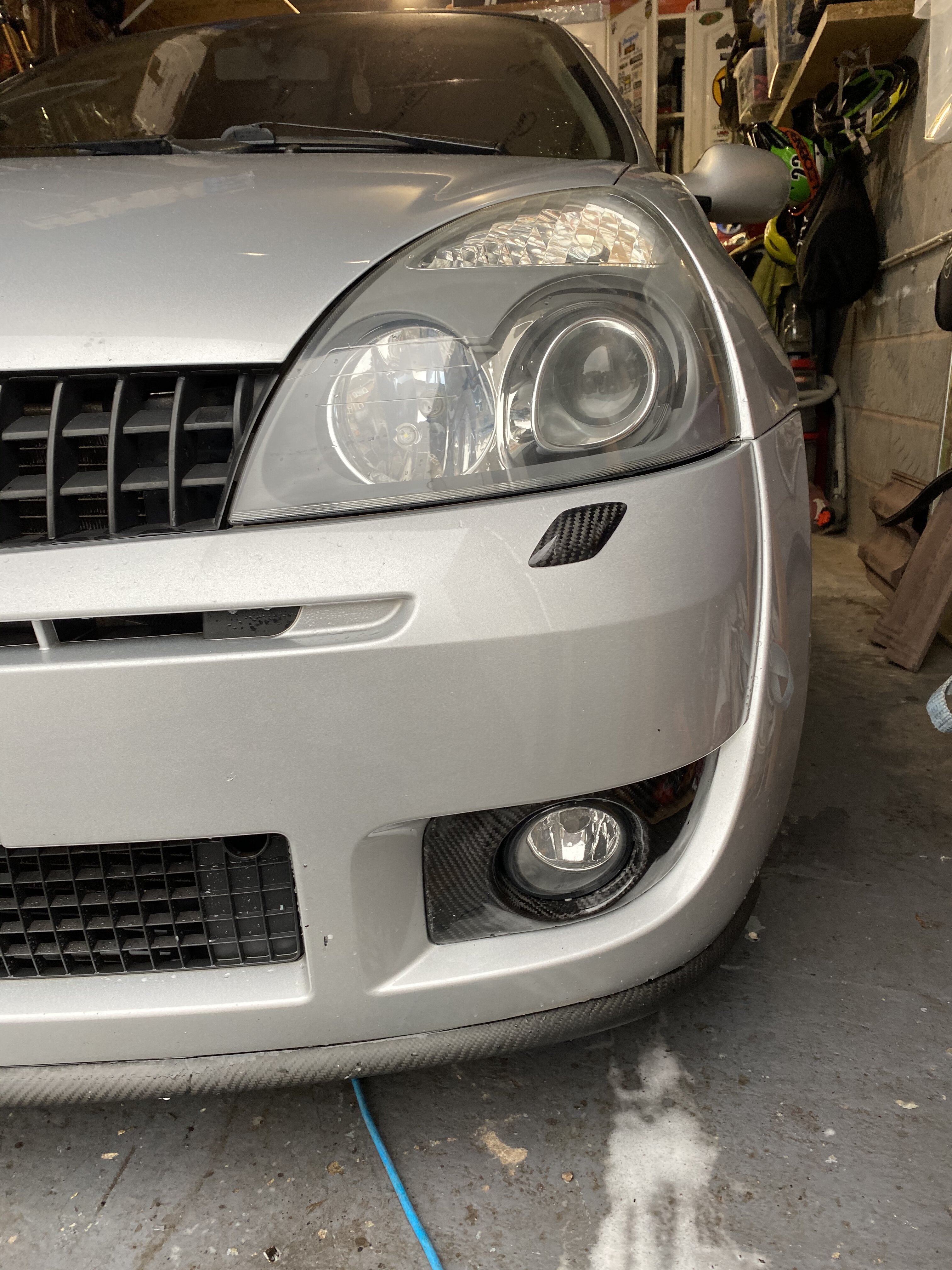 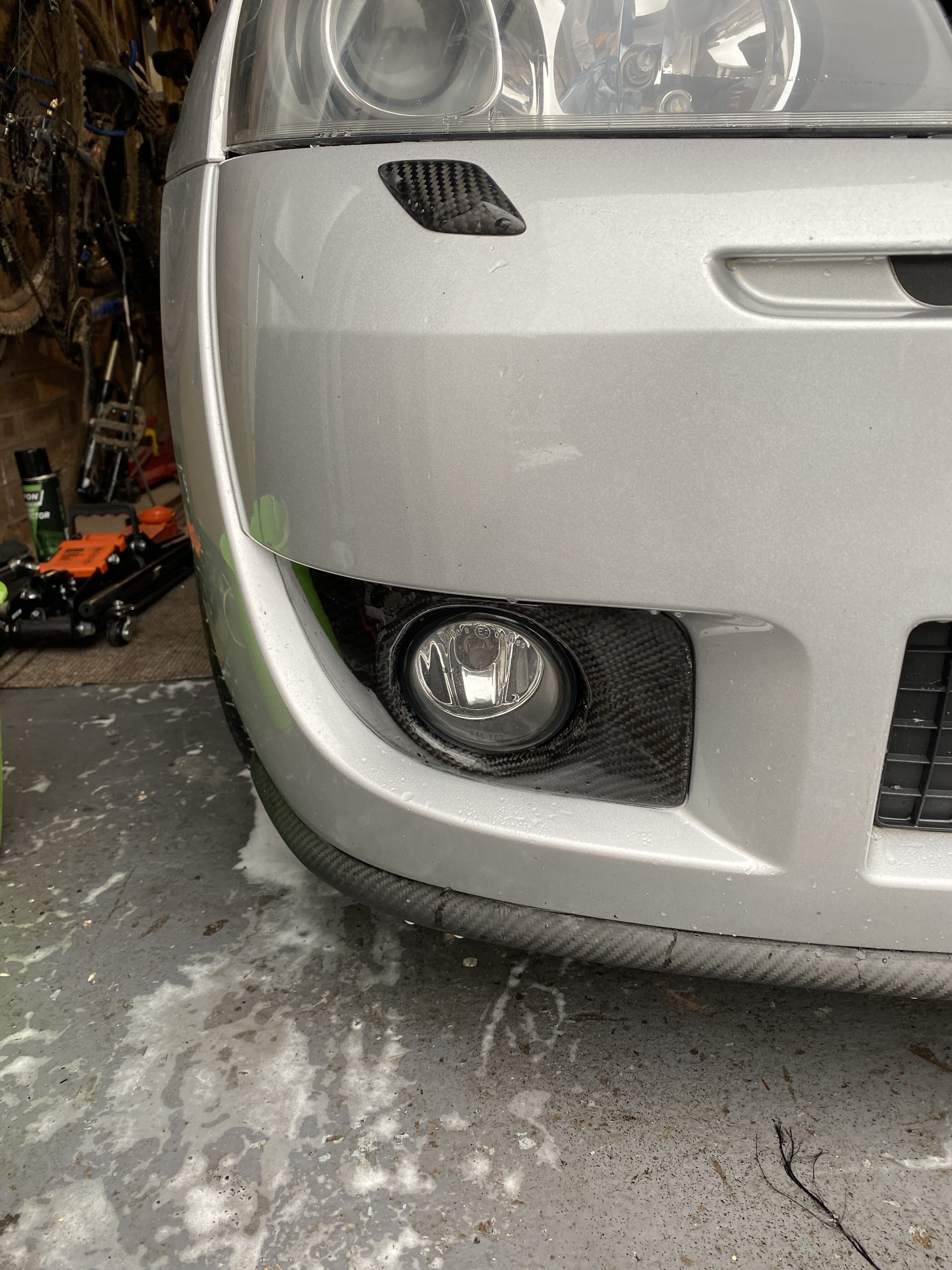 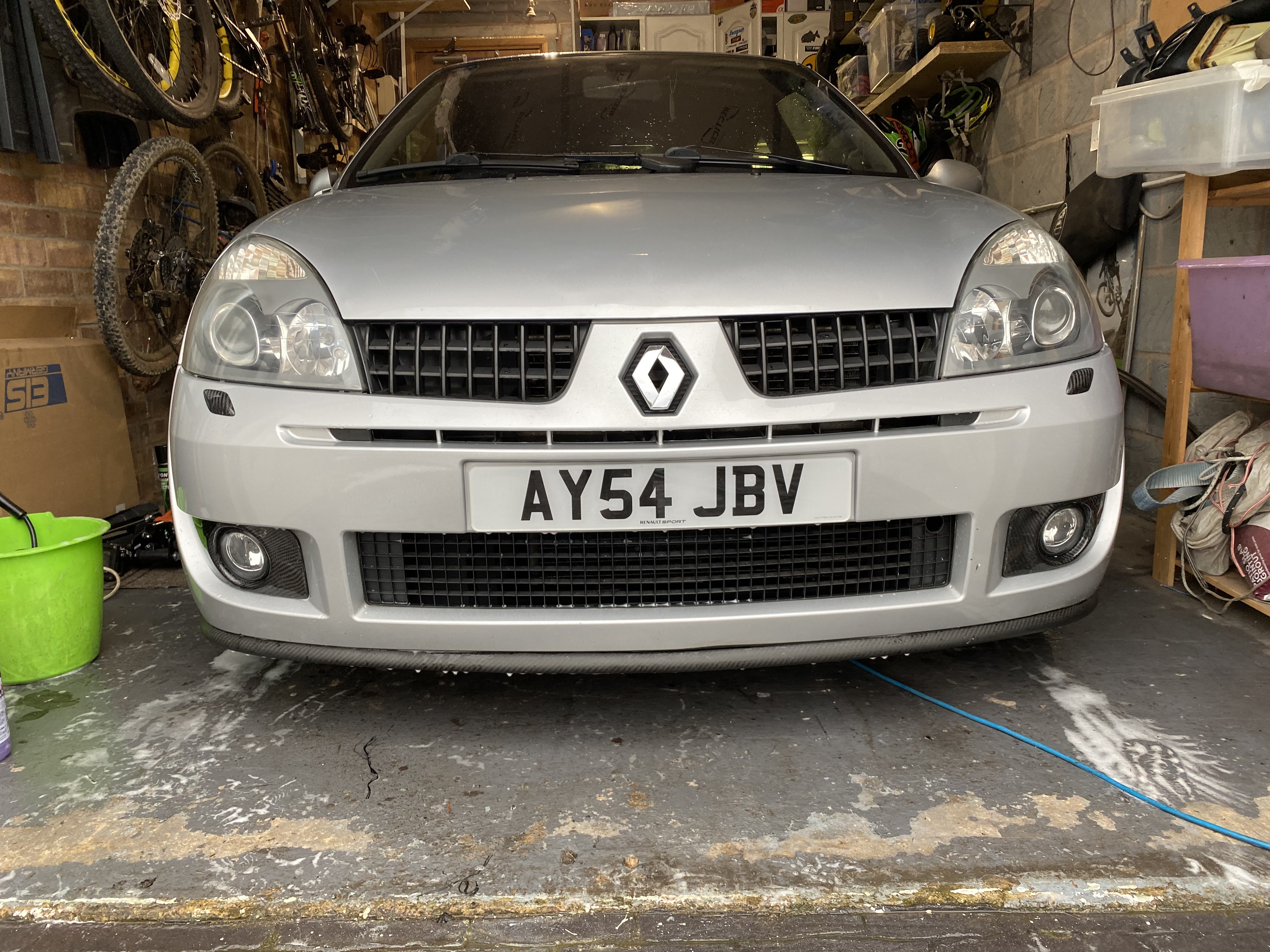 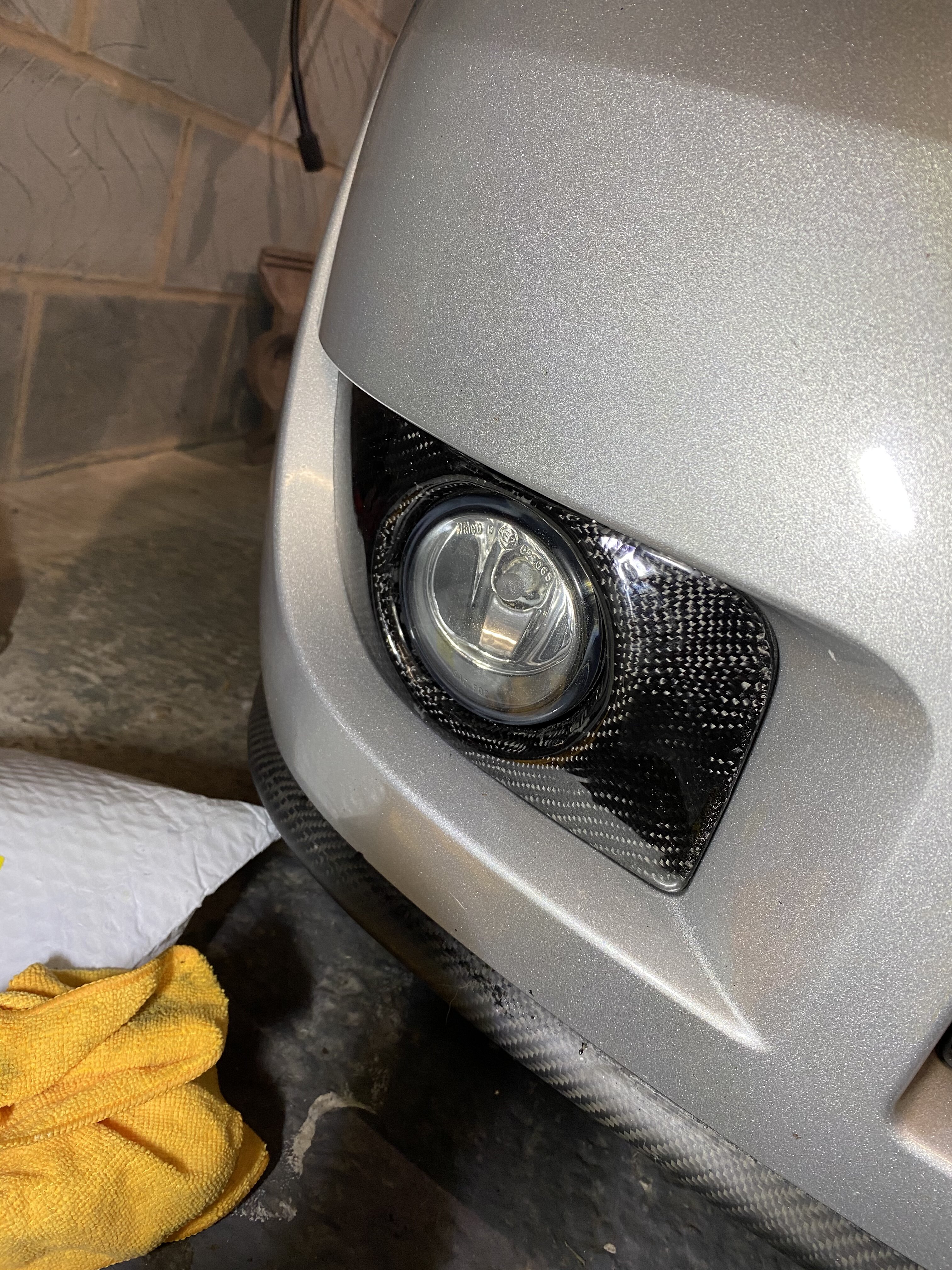 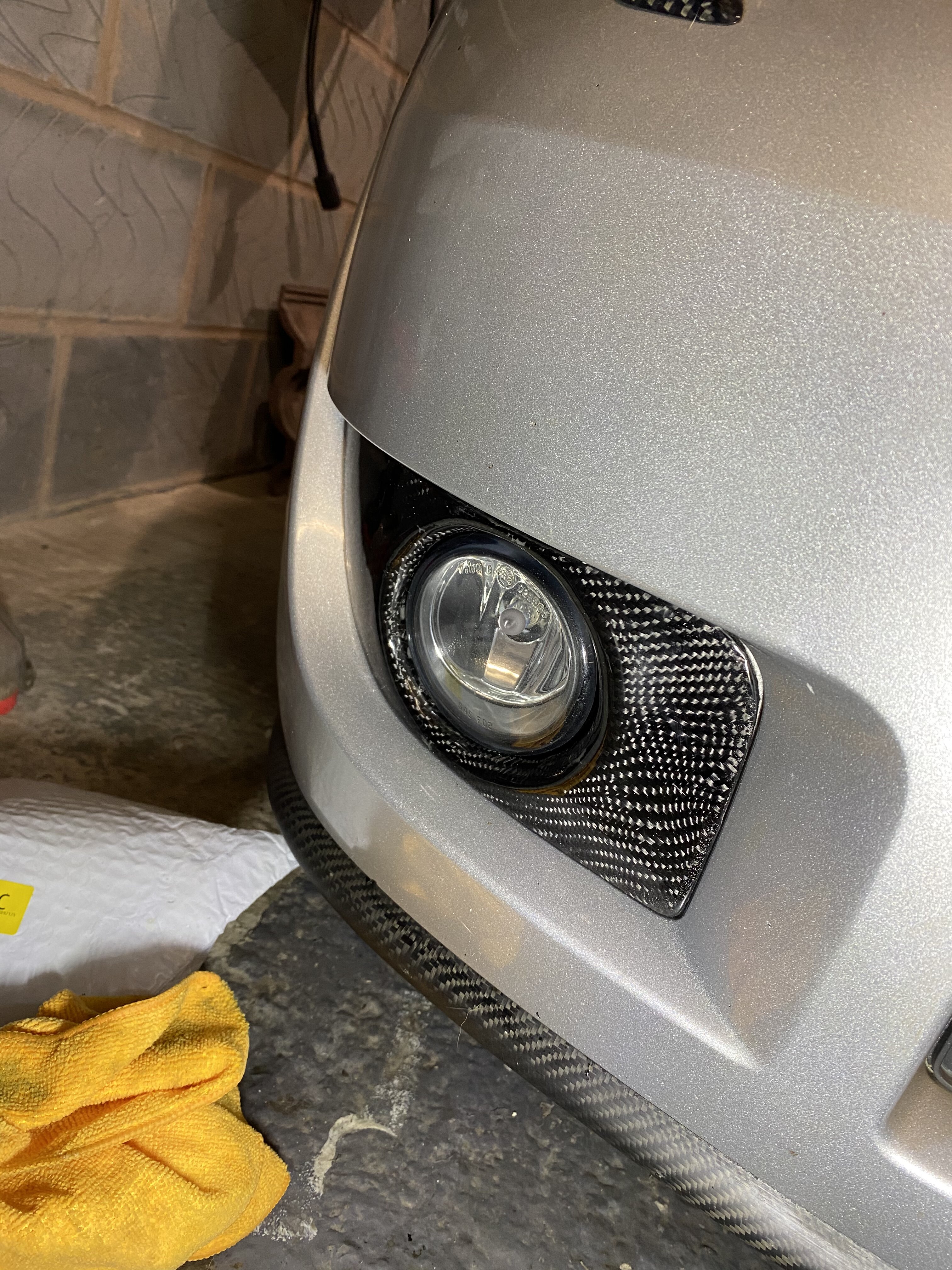 Finished the day off by giving the old girl a bath with my new snow foam Lance. 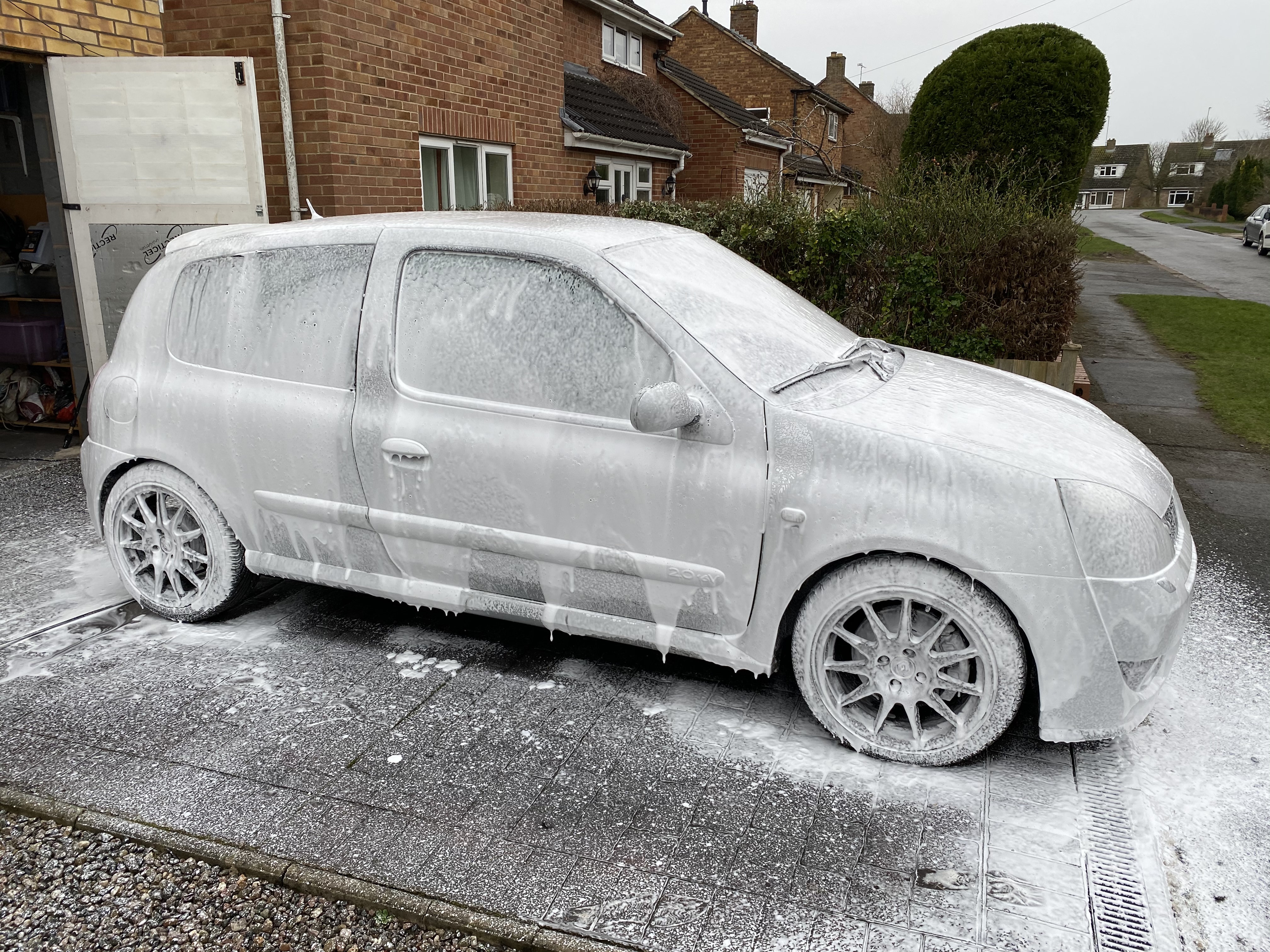 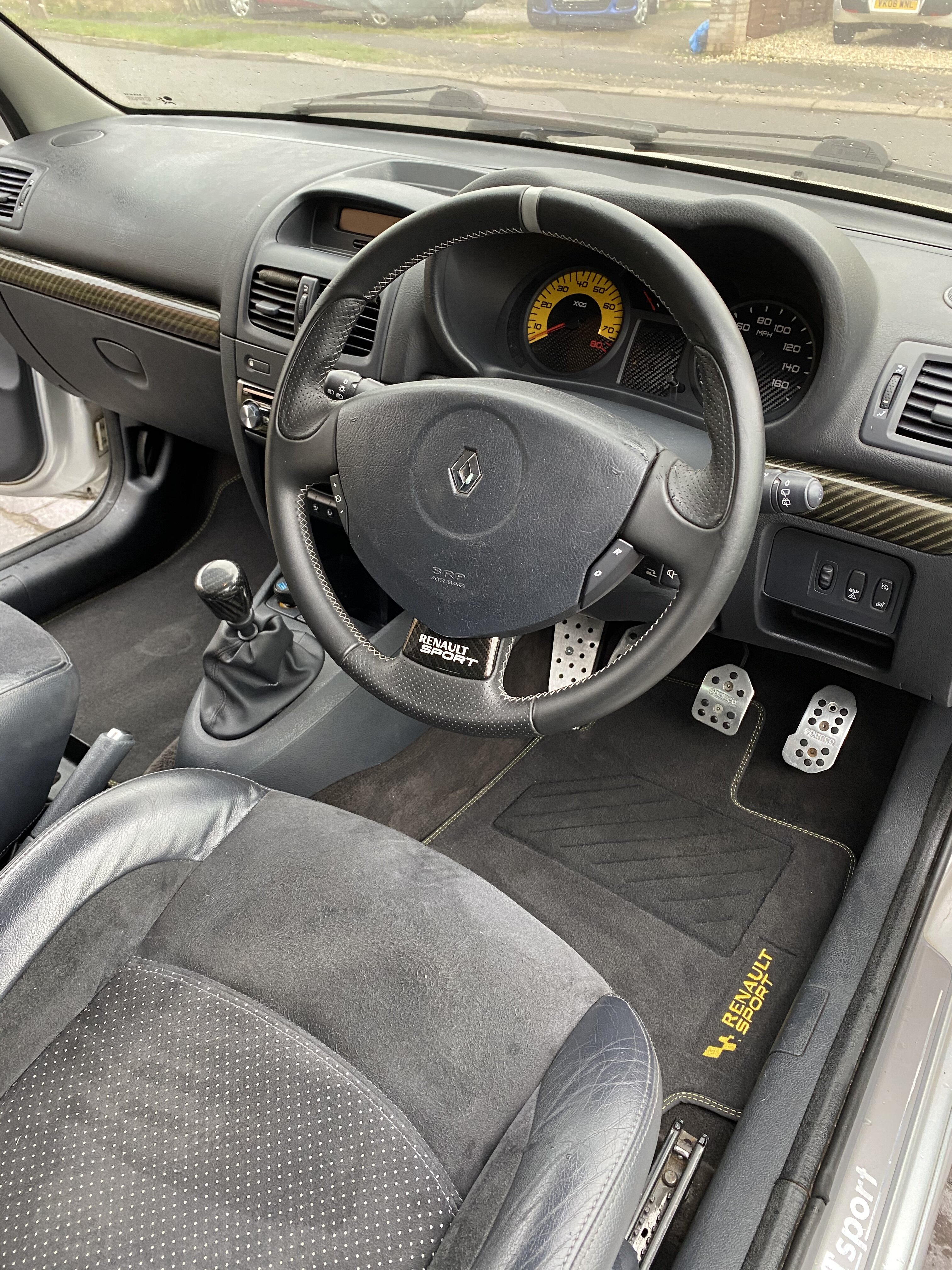 Will likely be slow with updates now. About to undertake some big building work. So the clio is being kicked out of the garage for a couple of months. I’m tempted to take the time to get the belts and bits done... probably somewhere like Diamond motors. Hassle is getting the car up there and me back! I’m unfortunate to live somewhere a bit far away from the big specialists. Would love to use AW....but that’s a jolly old way away

Your garage is looking very similar to mine... full of Titanium 182 and mountain bikes!

Jason473 said:
Your garage is looking very similar to mine... full of Titanium 182 and mountain bikes!
Click to expand...

It is yes, I need a bigger garage to be honest mine is bigger than a single. But with too many hobbies I am flat out of space! I had to even reduce the bike count. Ironic that I have bikes worth 3 times the clio but I Chuck them on the wall to make way for my little silver baby. Moving house is out of the window now as we are expecting our third child and spending ridiculous money on extending the current house...mainly because we want to stay in the same village and houses don’t come up too often. However when they do it has to have a double garage to be considered. Or a large standalone garage high enough for me to fit a ramp or pit!

ClioSport Club Member
172 Cup
Looks like you are doing a great job mate, especially given the tight area to work on the car.

dave120 said:
Looks like you are doing a great job mate, especially given the tight area to work on the car.
Click to expand...

Thanks mate, the photo is deceptive. I can get all around the car with plenty of space when I need to. It gets parked over to one side to stop my moronic children dragging bikes past it or the wife’s arse as she heads out through the garage.

ClioSport Club Member
Clio 182FF titanium
Nice little job tonight. Not sure how I hadn’t noticed this before, but the NS wing mirror was loose. Bit of a wobble and the cap fell off..bugger! On inspection it’s clear someone had been there before with a bolt and cheap crappy washer which had rusted through. Mainly because these mirrors are water traps! 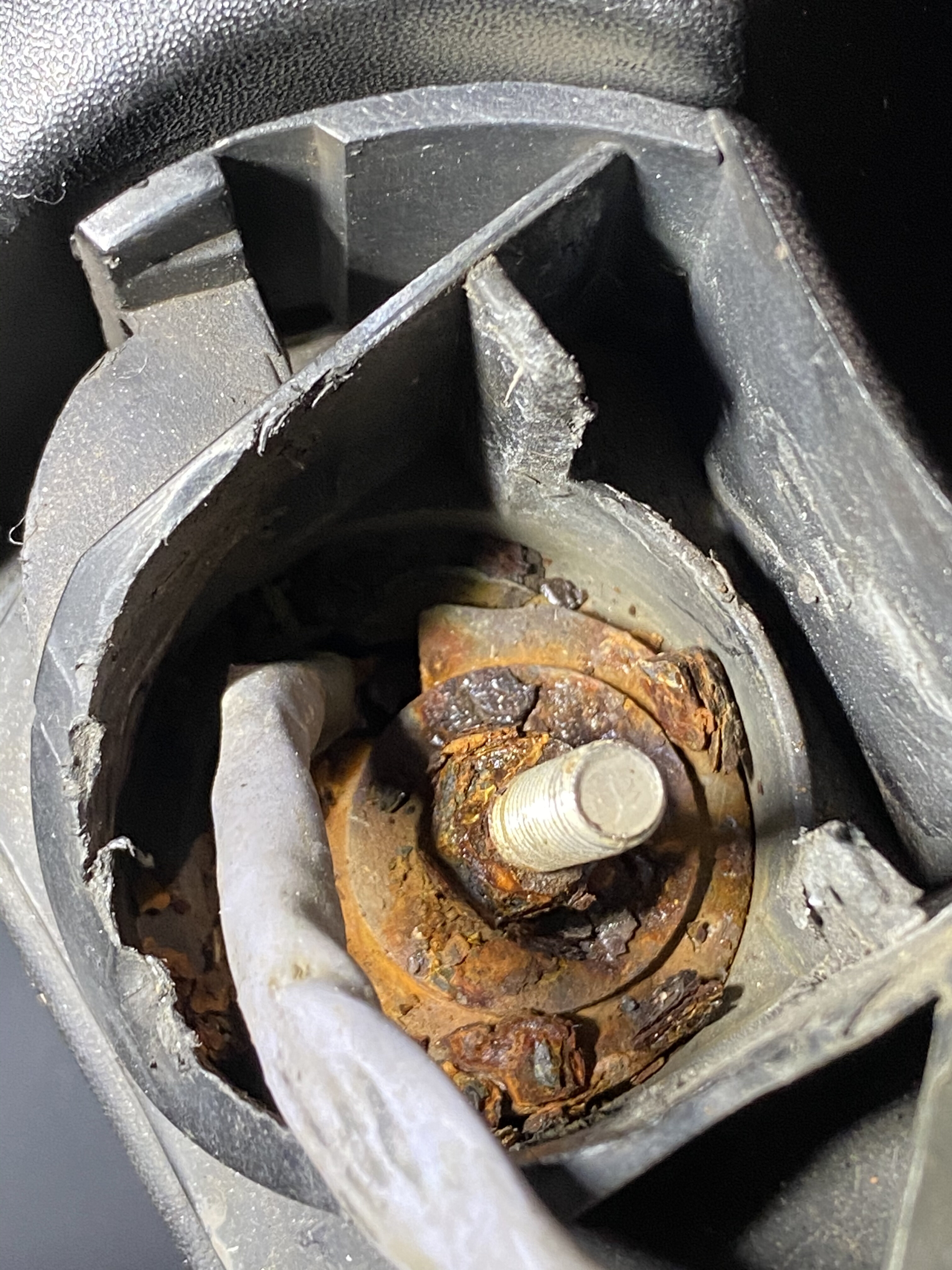 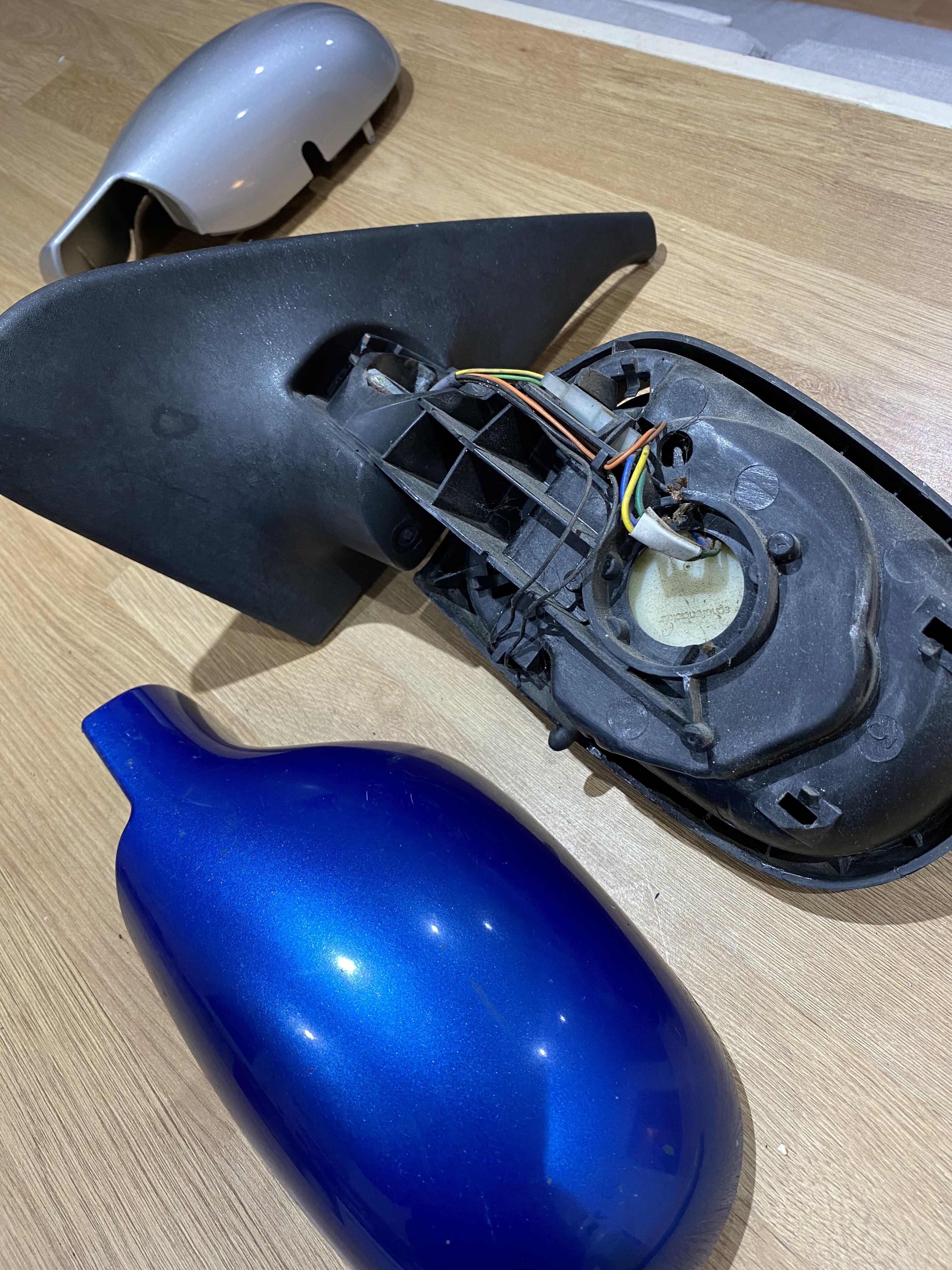 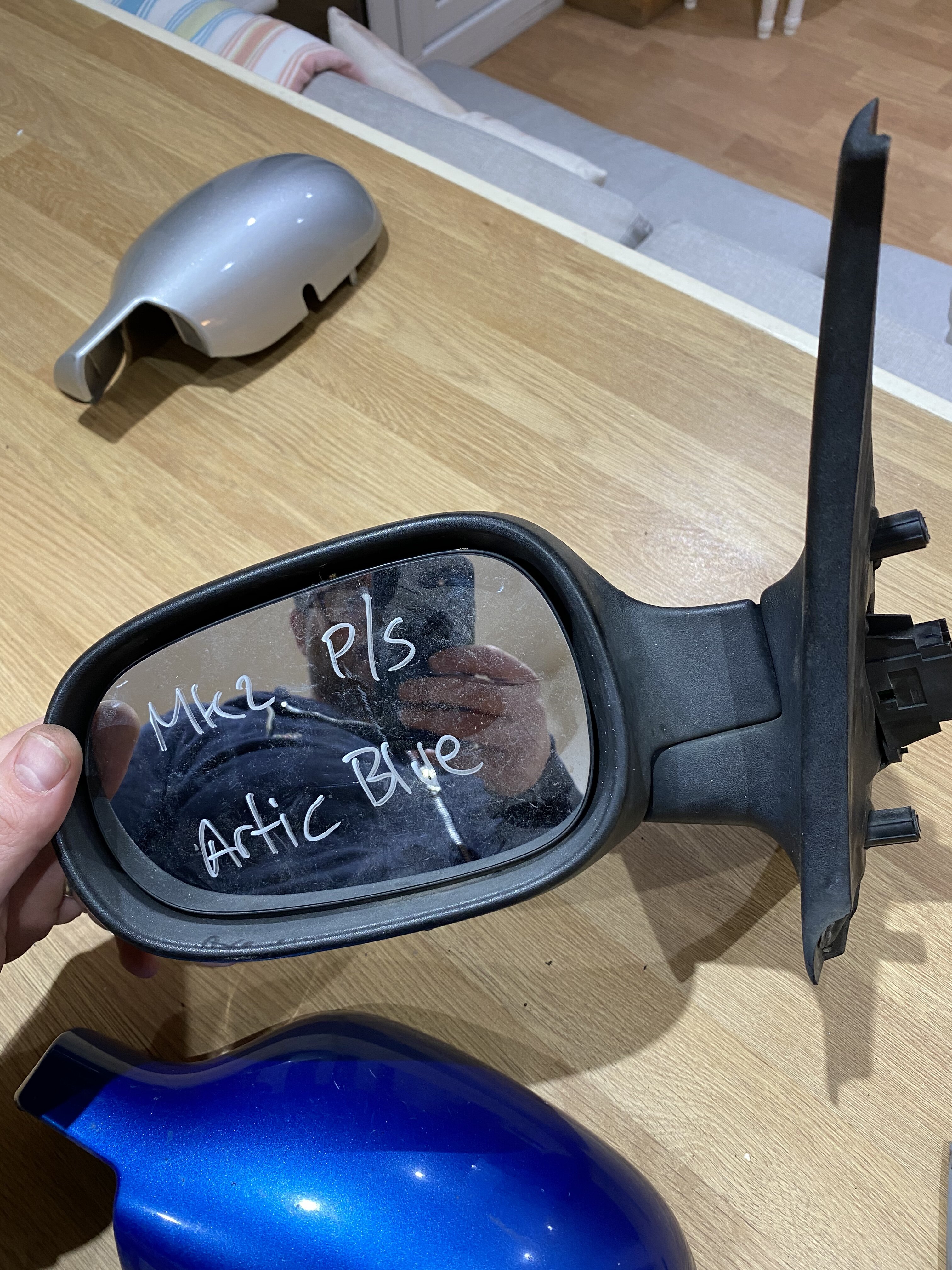 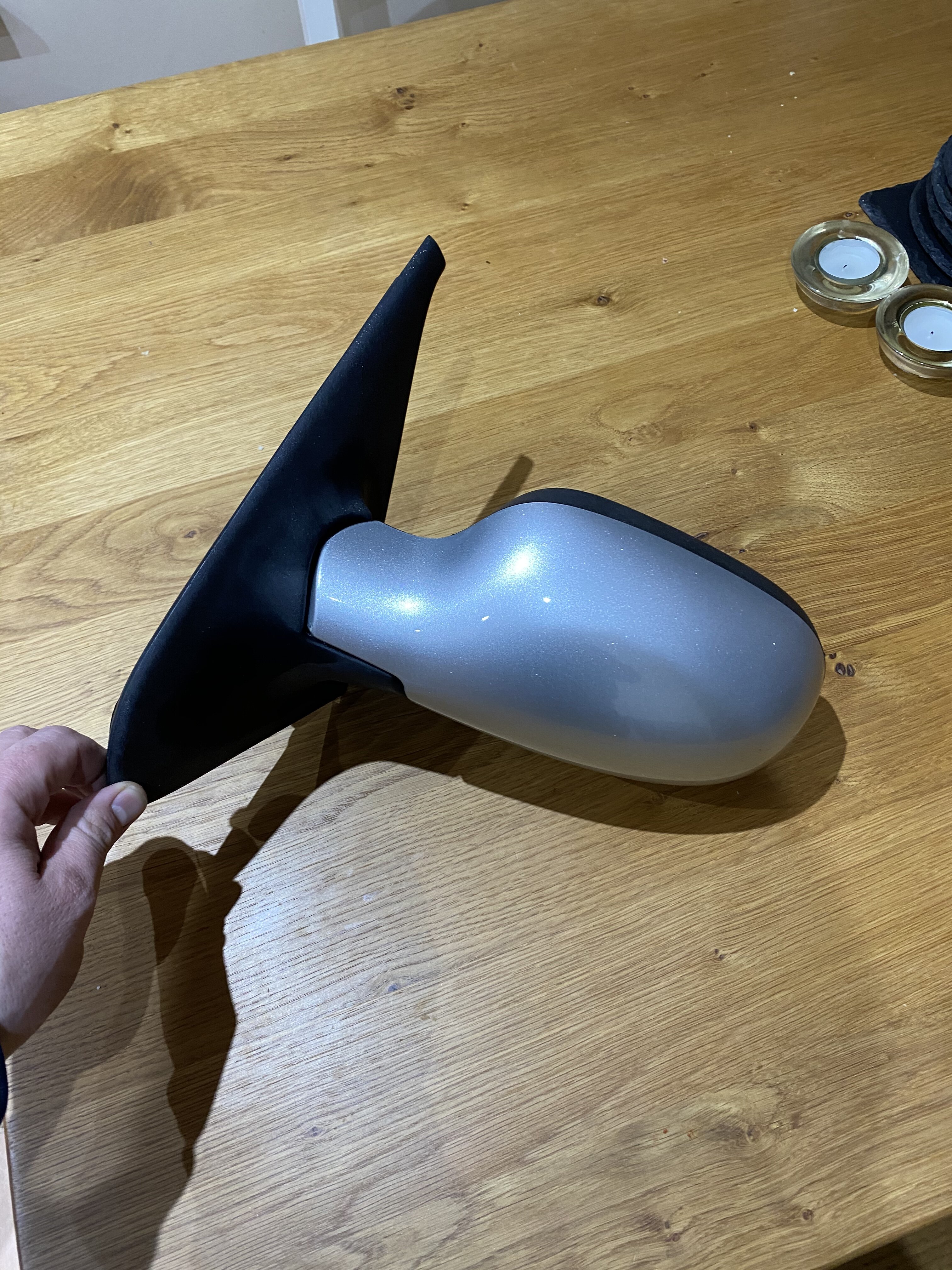 I did a bit of testing before fitting as I know the temperature sensor is housed in the NS wing mirror. Glad I checked as would’ve been annoyed if I noticed later in the summer! Luckily all good as gold, defo recommend BTT who seem the fairest and easiest breaker to deal with at present. Cleaned all of the crap that had been hidden behind the mirror for some years. 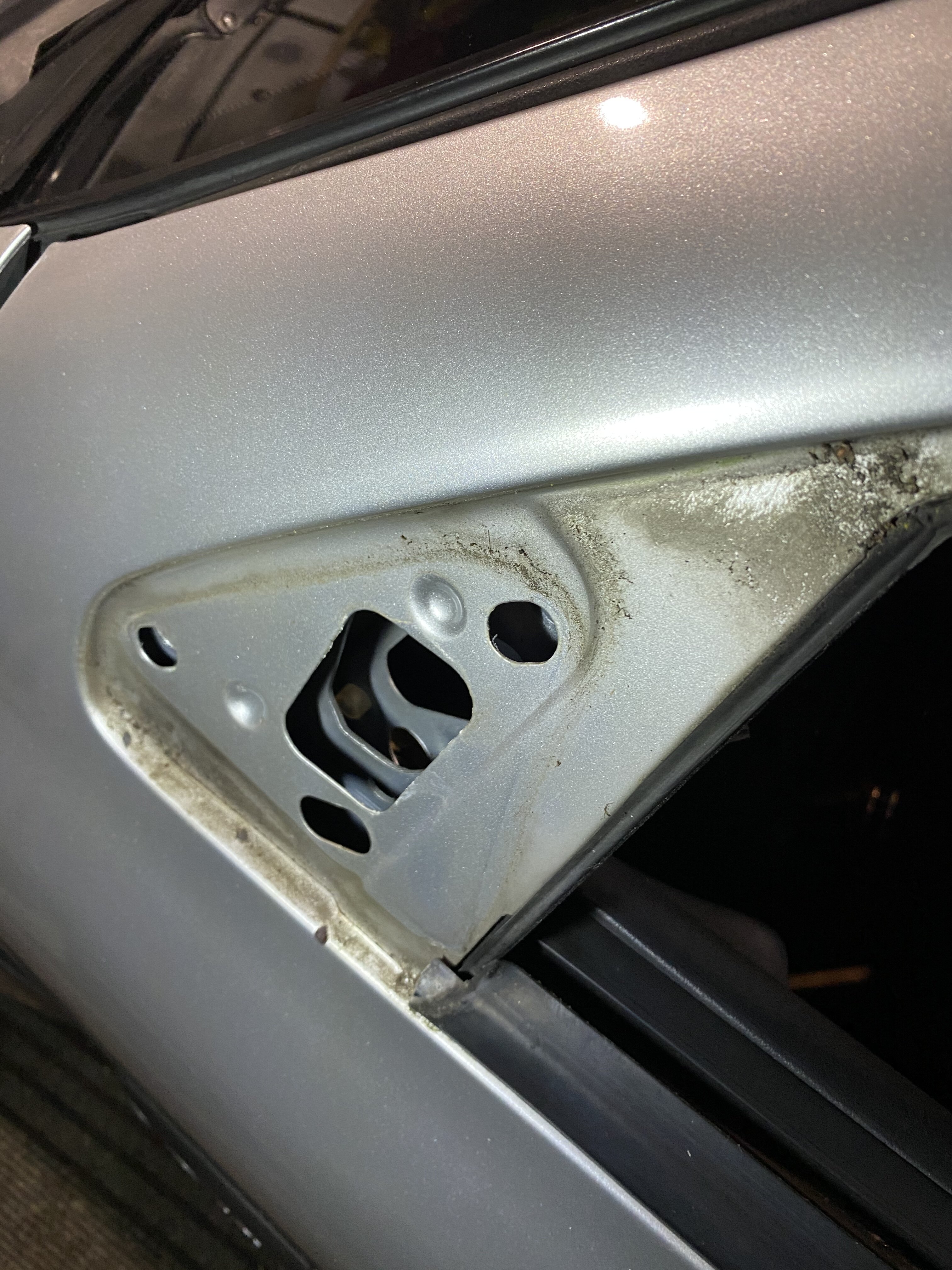 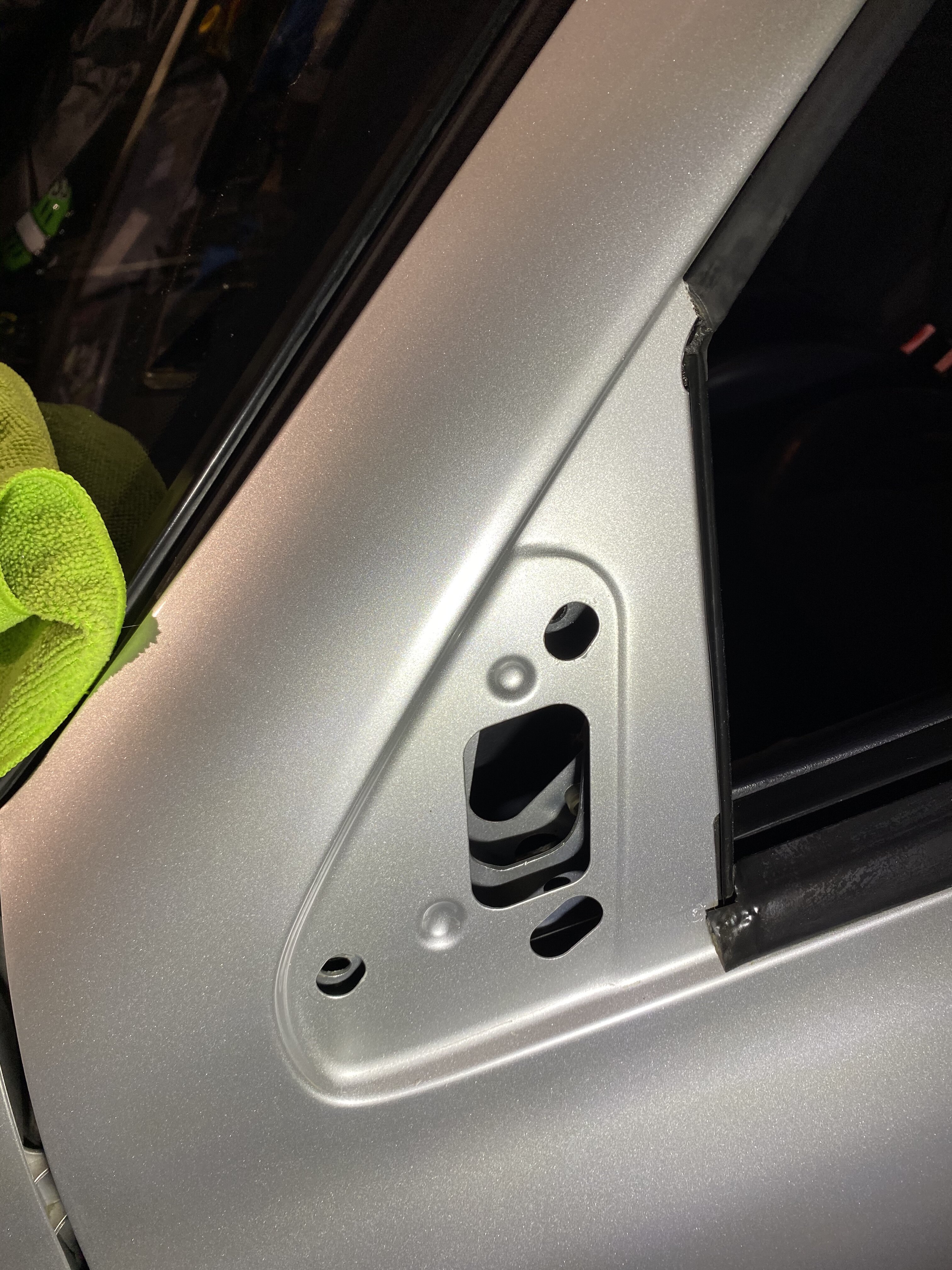 All fitted and looking distinctly like it should do...silver and shitty 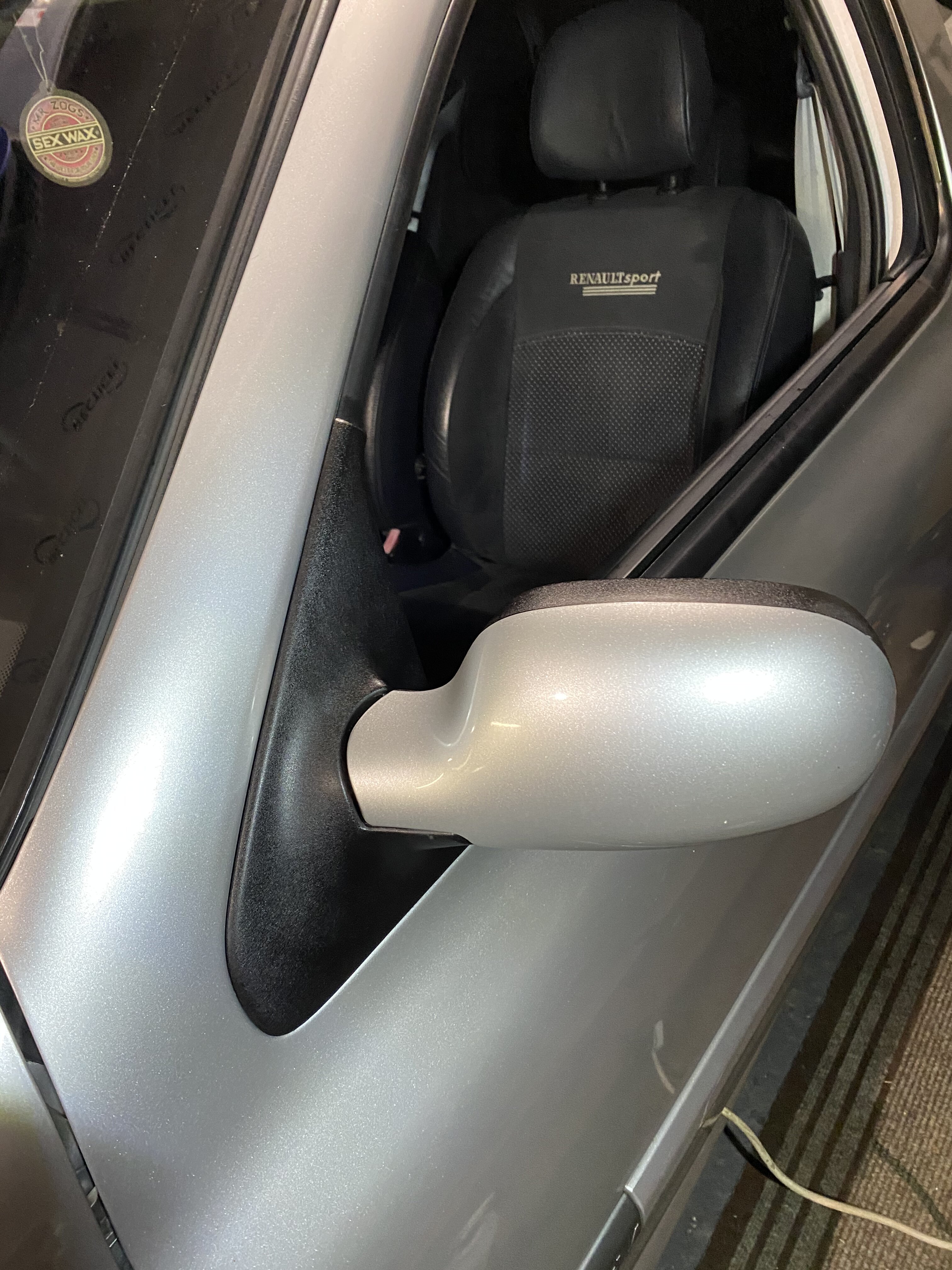 RustyMojo said:
Nice little job tonight. Not sure how I hadn’t noticed this before, but the NS wing mirror was loose. Bit of a wobble and the cap fell off..bugger! On inspection it’s clear someone had been there before with a bolt and cheap crappy washer which had rusted through. Mainly because these mirrors are water traps!
View attachment 1523443

Glad we could help!

Inferno182 said:
Glad we could help!

Sent from my iPhone using Tapatalk
Click to expand...

Was going to drop you a mail actually! Not got any 182 beams and brackets in stock do you?
You must log in or register to reply here.